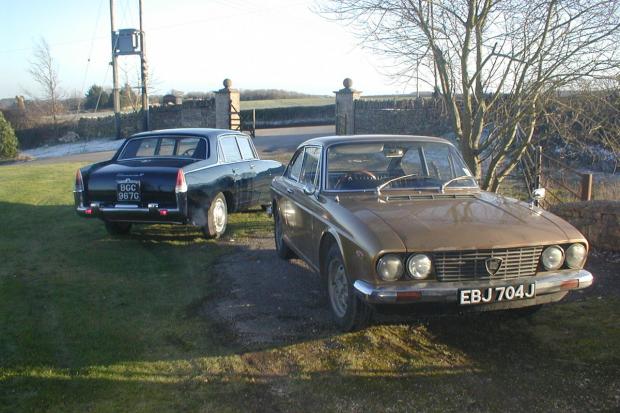 If there is one car I’d like to find and buy back it would be my gold Lancia Flavia 2000 Coupé EBJ 704J.

I bought the car in 2001 or 2002. It had been advertised in London Loot for quite a while and the description of it by the vendor rather underdescribed its state of preservation. He’d bought it with a girlfriend years before but they had parted company and it was languishing in his garden with its brakes removed I seem to remember.

I gave £500 for it, got it back to Stroud and soon sold it on to my friend Steve Wilce who, rather eccentrically I thought at the time, removed it on a flatbed trailer without tethering it down. He just stuck it in first (the handbrake mechanism was disconnected just to make things more interesting) and drove home very slowly.

Within a few weeks he’d got it going and somehow I managed to persuade Steve that, really, he needed to swap me the gold Flavia for my white 2000 IE Sedan (not a bad car) and a Citroën BX GTi (a hated lump of French plastic that leaked).

I then used the Coupé as my everyday car on and off for probably two years. It was economical, relatively fast and refined. Best of all, other than a scruffy bonnet edge it was fairly un-rusted with a beautifully original interior. I went everywhere in this car. It was like a friend and I even loved the colour.

We  took it on holiday to France in the year of the great heatwave. Apart from the fact that one half of the handbrake mechanism dropped off within yards of leaving home (I simply pulled the handbrake up to get it off the deck and dealt with it when I got to France) the Flavia behaved perfectly.

I recall cruising in perfect smoothness at 110mph and getting to Portsmouth in an absurdly short amount of time. It didn’t lose a drop of water in France. It really was a great car so I can’t think now why I sold it. Probably to fund another much less sensible and faithful car or to alleviate some financial constraint or other.

Anyway, I can’t recall the sequence of events, but the Flavia ended up with my late friend Geoffrey Burgon for a while (he bought it from someone I’d sold it to) and I was hoping he’d be the one to tackle the bodywork because he was obsessed with doing a colour change, but in the end the Flavia was passed on to some dozy dreamer in London who abandoned it in a mechanic's yard the moment it gave trouble.

I smelt blood, but he proved impervious to my offers. Next it was spotted on eBay owned by some sketchy character who was threatening to 'banger it if he didn’t get a decent offer', but I somehow missed the auction... and that was the last I heard of my beloved Goldfinger.

Last year I found my old blue 2000HF from 20 years ago languishing in the yard of Lancia specialist Richard Thorne. It was totally derelict and I’m hoping the same fate has not befallen my gold Flavia 2000.  Where are you now EBJ 704J?