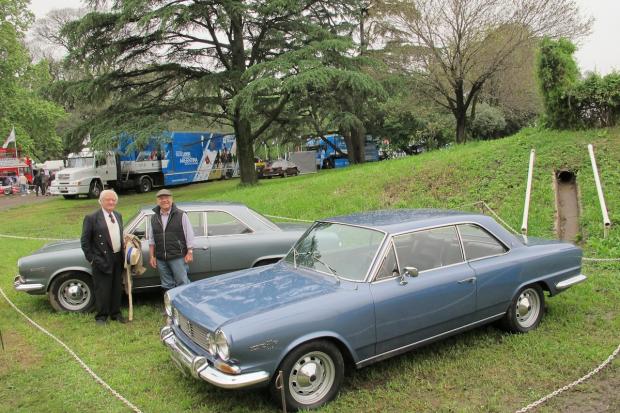 One incident at the wonderful Autoclásic, the annual car and bike spring festival in Buenos Aires, perfectly illustrated the passion of Argentinian enthusiasts.

Prior to traveling to South America, I’d swotted up on locally built cars including the Peron-backed Justicialista, De Carlo microcars and the Torini 380.  Like so many of the models built exclusively in South America I’ve seen pictures only in my well-thumbed Georgano Encyclopedia of Automobiles, or on specialist websites.

My first blissful day exploring the sprawling show and autojumble, staged among the elegant Alamos tree-lined avenues of the Hipódromo de San Isidro, was the ideal introduction to Argentinian automotive history.

Club members eagerly explained the histories of rare microcars, while hardy competitors in the Agrupación Clásicos e Históricos del Turismo Carretera regaled me with their adventures on 20,000km rallies.

Other highlights included hearing a prototype Steyr-based air-cooled V8 run in the Justicialista roadster, and finally getting to see an ASA Monfaro kit car. I’ve long wanted one of these Fiat-powered, GRP-bodied, Maserati A6GCS replicas, but local values and high shipping costs now make it another pipe dream.

The generous organisers were jubilant about my enthusiastic response to the event, but I couldn’t hide my slight disappointment at not finding a Torino coupé.

The following day Alec Daly of the Club de Automóviles Clásicos said he had a surprise for me.  Heavy overnight rain had caused extra hassle for the all-volunteer team, but, amazingly, they’d still found time to phone around to source not one, but two Torinos, including a prized high-performance 380W model.

The Rambler-based design is powered by a 3.7-litre straight six, and was originally built by IKA before Renault took over the factory and killed it.

The passion for the Torino was underlined as owner Carios Gadda Thompson was showing me the triple-Weber ‘six’. A local enthusiast rushed over, gazed in wonder at the rare specification and, after hearing it start up, dropped on his knees and kissed Thompson’s hand to acknowledge him for bringing the rare hot model.

My friend Rondolfo Iriarche bought a new Torino back in 1967 after attending the launch where he queued for hours to ride alongside the great Fangio. “I was a young architect and, with my first big fee, I went straight out and bought a new Torino,” recalled Iriarche. “The car was fantastic to drive, and so much better than the crude, locally built Ford Falcons. I was so happy I started singing to myself on the way home.”

Argentinians are rightfully proud of the sharp looking Pininfarina-styled coupé that, with its glass house-style top and crisp lines, has a touch of Glas and Fiat 2300.

With luck we may see a Torino racing in Europe next year.  Back in 1969 a team of three white coupés with Fangio no less, as team manager, ran in the 84 Hours of the Nürburgring, and Iriarche’s son Torcuato plans to relive that legendary exploit. Those V8 teams better look out.