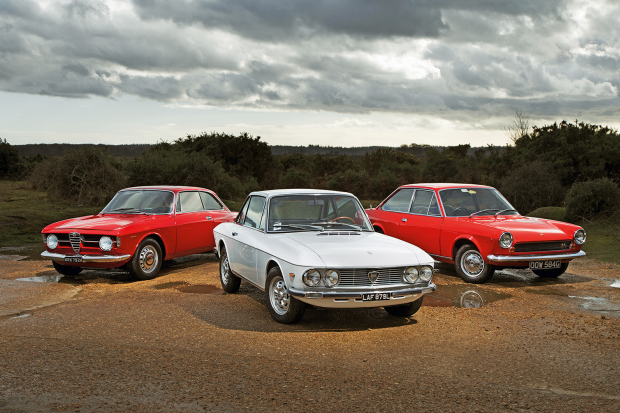 Forget your homegrown tin today, for what’s that coming over the hill? Not one, not two, but three Latin beauties.

Back in the mid-’60s, with the Mini helping the British motoring public get its groove on, it was to the Continent that coupé man turned if he wanted something a little extra special. 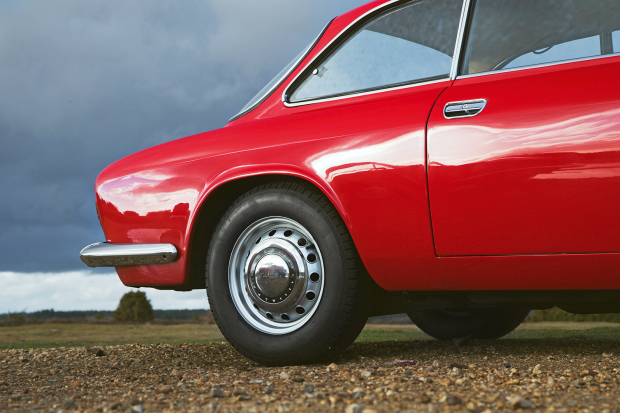 Alfa Romeo’s little corker, the Sprint GT, was released hot in the tyre tracks of its 105-series sibling Giulia TI saloon. It offered the 1600’s same all-alloy 1570cc twin-cam engine and five-speed gearbox, but now with servo-assisted disc brakes all round and independent front suspension – heady stuff for 1963.

However, it was the delectable Bertone styling by Giorgetto Giugiaro that banished all thoughts of its comparatively boxy progenitor.

‘Our’ car was kindly supplied by Southwood Car Company, where it is currently for sale, and is a later GT Junior, complete with period tax-rate busting – in Italy, at least – 1290cc powerplant. 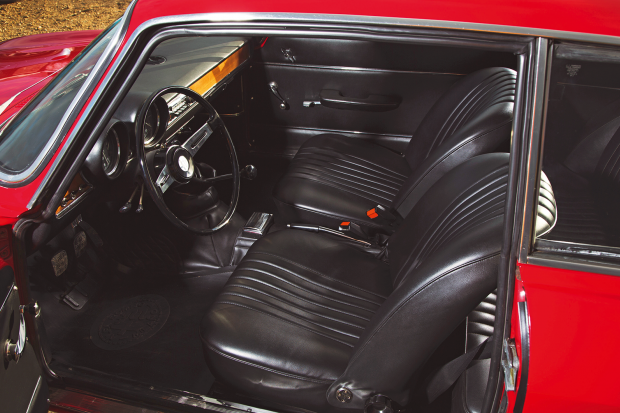 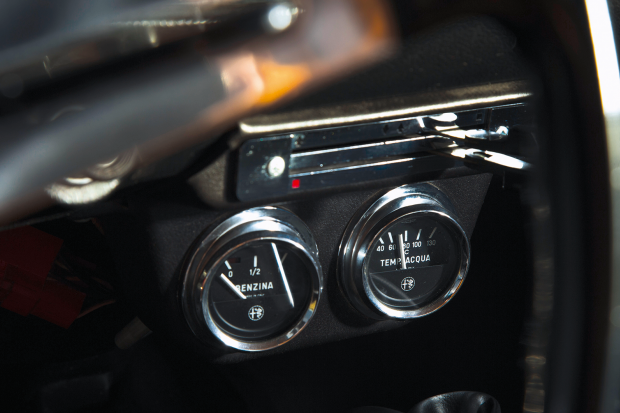 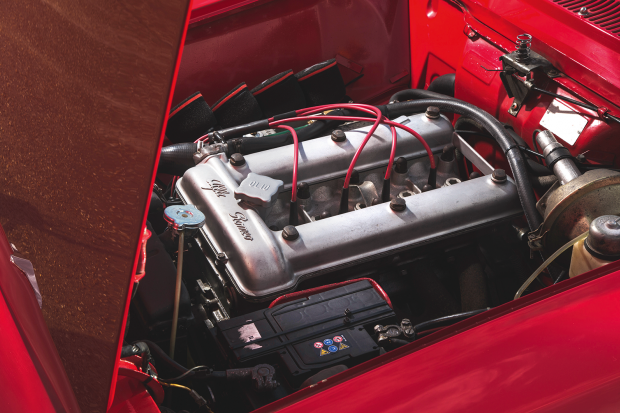 As a 1970 example, this entry-level model has the simpler pre-’74 bodyshell – and what a body it is. Its proportions work beautifully from any angle; the subtle step of the bonnet frames a moody-looking front end with its single headlights either side of the large central Alfa grille. The tail is simplicity itself.

Flared wheelarches imply an underlying sportiness, with the comprehensive use of chrome on window trims, alloy wheel caps, doorhandles and bumpers classily doing its best to quell any such expectations. The seating position, which is high upon rather than in, dampens them further.

There’s no disguising the driver-focused dashboard binnacle and its prominent Jaeger Italia gauges, though, or the aggressively canted gearlever – both suggesting that this coupé was made for driving, and that’s just what you’ll do. 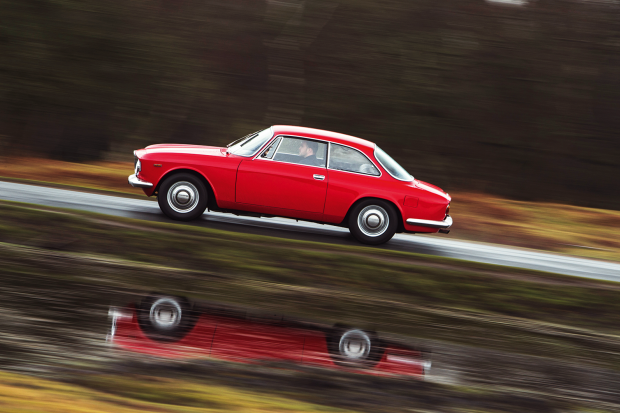 Sporting GTA-style velocity stacks, the twin carbs fire with staccato barks. First impressions are that it’s all noise and very little in the trouser department, but downchange, throttle down and hold the revs to get that needle spinning round to the 5750rpm redline and it soon shows itself to be one gutsy little unit.

You do have to work it, though. Having inherited the 1600’s twin carbs and camshafts, it’s a smidgeon down on torque. Its 12.6 secs 0-60mph sprint won’t set the aforementioned strides alight, but take a series of snaking S-bends at speed and its inherent balance will ensure you find yourself pushing even harder next time.

The GT Junior is classic motoring at its best: a small, delectable-looking car, with a strong punchy engine, engaging gearchange, decent brakes and plucky handling. Most importantly, it’s a car you can drive hard in almost any conditions without worrying about either losing your licence or running out of Tarmac.

It’s going to take some beating. 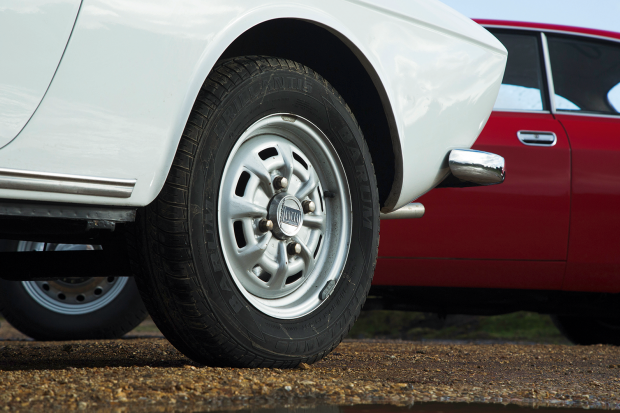 First to try is the Lancia Fulvia Coupé, early ones of which hark back to a time when a certain Turin giant hadn’t yet swallowed the marque whole. The bloodline still ran true; forget making a profit, what mattered was being true to your ethos and simply producing the best car possible.

The company used its 1963 front-wheel-drive Fulvia saloon model as a base for the Coupé. Its canted 45º V4 had raised compression, with capacity increased from 1091cc to 1216cc; twin Solex C32 carburettors, an all-synchromesh, initially four-speed gearbox and disc brakes came as standard.

Like the Alfa, the biggest single difference was the introduction of a new body. With two feet of the saloon’s floorpan whipped out, it produced a comprehensively restyled car.

Surprisingly, rather than approach a carrozzeria, as was the company’s usual wont, this was conducted in-house. With costs kept tight, it resulted in a genuinely ‘affordable’ Lancia – one that was greeted with real enthusiasm at its 1965 Geneva Motor Show launch.

It’s easy to see why. Visually, the Fulvia is a satisfying-looking car and certainly more demure than its Alfa rival. Its stainless-steel-trimmed rear end has a dainty refinement, with an angular shape that’s in stark contrast to the Junior’s curvacious backside. 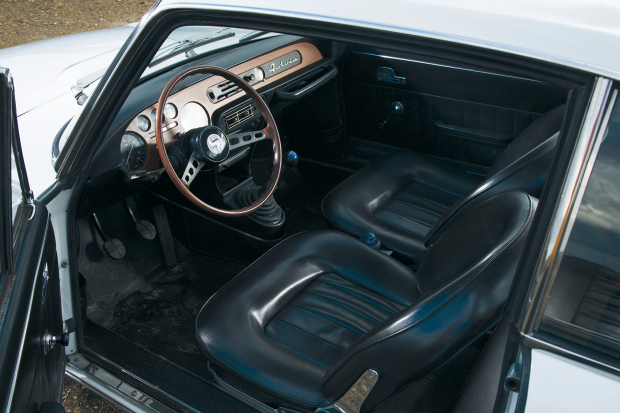 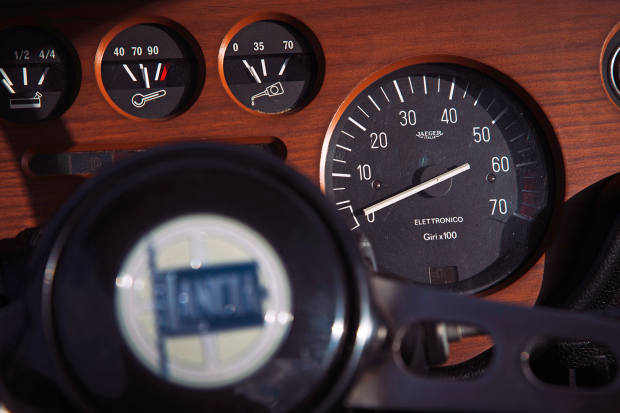 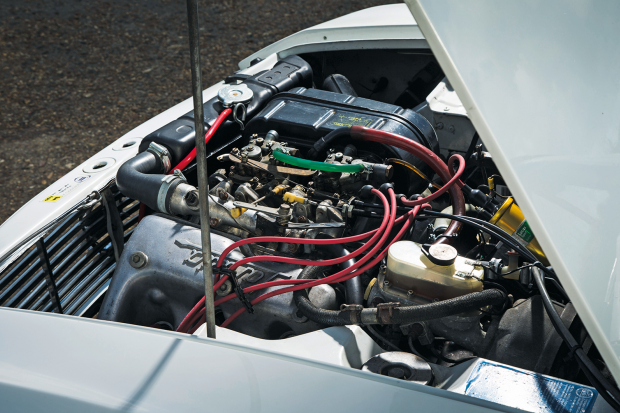 To enter, you lower yourself into an interior that’s nicely finished, if a little unsure of what level it is pitched at. Workmanlike rubber matting abounds, yet the door pulls have real solidity and a luxurious feel.

The thin pillars ensure superb visibility and, despite an apparently higher cabin, you sit lower in it, cosseted by a superbly supportive seat.

The first driving impression is one of refinement. Despite its two twin-choke carburettors, this later 1298cc engine fires with a modicum of the Alfa’s drama – intake exhortations muffled at source by the large airbox. The V4 is free-revving and the brakes feel superior, but the Fulvia is a step up in terms of road noise insulation and ride sophistication. 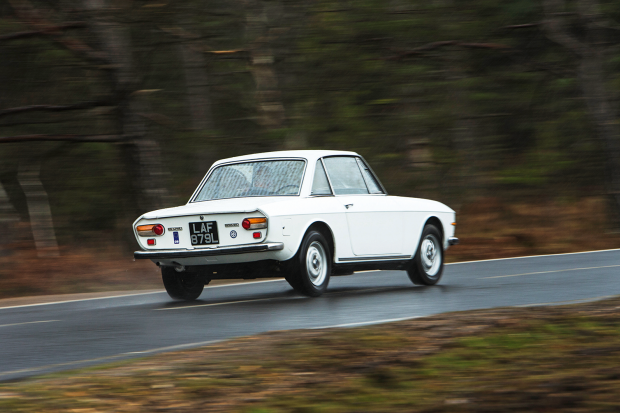 Anyone who has taken one apart will tell you that Lancia silent-blocked the bejesus out of it and, despite using leaf springs both front and rear, the independent front suspension and dead rear axle combine to provide a car with delightful handling.

Pitch into a tight corner and the low-geared steering is initially anathema to the Alfa’s high-geared, attention-seeking set-up. But allow it to load up and it does so majestically, transmitting to hand both the car’s intentions and the road surface nuances.

Don’t let that lack of initial drama fool you, because this Fulvia is a grower. Drive it, trust it, and you’ll soon be marvelling at just how easily it consumes B-roads.

That is what prompted owner of four years Brian Mills to pay £12,000 for the car and to have it shipped from Italy.

“I wanted a well-engineered, stylish, small sporty car with good handling,” he says. “The Fulvia loves to be driven on challenging roads; the engine revs freely and the handling, roadholding and brakes are superb. I had another for about 10 years.” 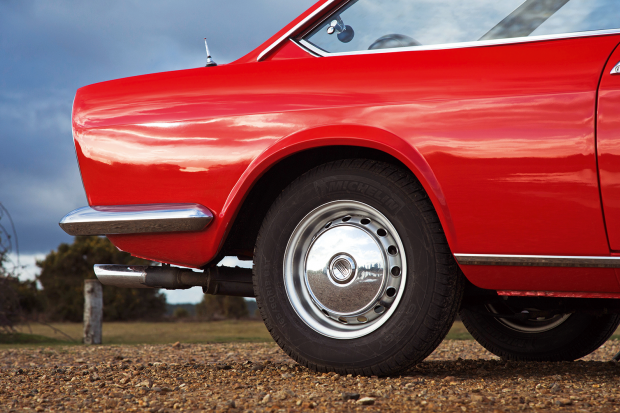 Our final offering comes from Fiat.

Like Lancia and Alfa Romeo, it used a cooking saloon model as its base – in this case the 124 in 1966. Its gestation period was similar, too, with the Coupé appearing the following year.

Specification duplicated that of its soft-top sibling, the Sport Spider, and again was of a Brit-shaming level of sophistication. It boasted an Aurelio Lampredi-designed 1438cc belt-driven twin-cam (ditching the saloon’s pushrod 1200cc unit), servo-assisted disc brakes all round, a five-speed ’box and a conventional suspension set-up.

Like the Fulvia, its styling was completed in-house, with Mario Boano at Fiat Centro Stile doing the honours. The result is mixed. He must have been in stylistic conversation with Tom Tjaarda at Pininfarina, because the front end has that same lovely simplicity as the Spider; from the front three-quarter view, however, it’s slightly ill-proportioned. From side on it is a little better, but still sharp-edged, while the rear would also have benefited from a softer pen.

The Coupé is almost a halfway house between the Alfa and Lancia, with the same truncated boot of the former and the latter’s large, angular glasshouse. It’s likeable – more so than the facelifted, twin-headlight BC of ’69 and the further revised CC, which received a questionable moustache-aping central grille in ’72 – but to what degree depends on the angle. 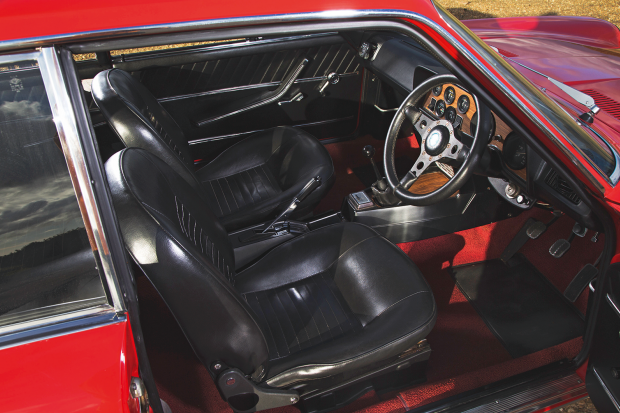 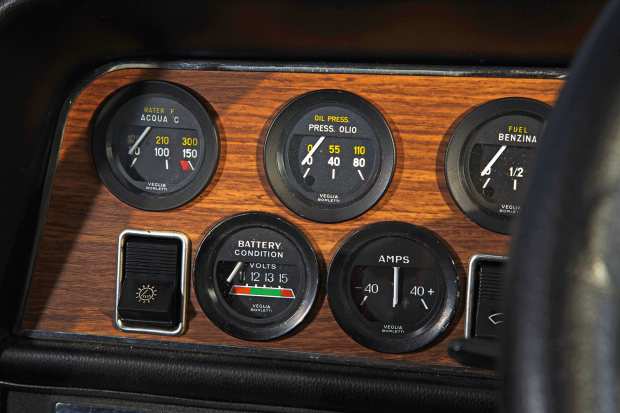 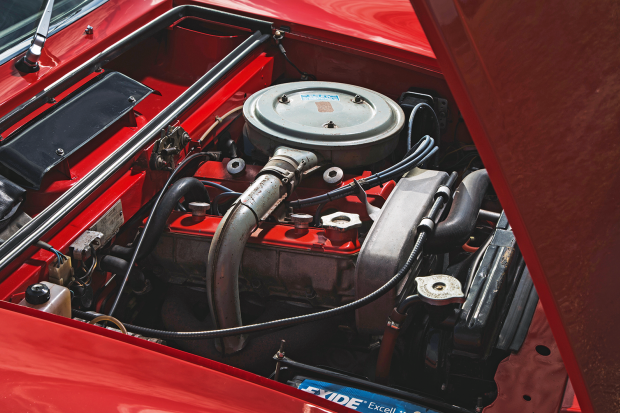 The interior and substantial boot are the most spacious of the group, with decent-sized rear seats and the best driving position. It’s well appointed and finished, with a similar feel to the Lancia’s mix of wood and vinyl – although both feel slightly dull when compared to the Alfa.

Owner Bernie Teather’s only addition is an Abarth exhaust system that lends the start-up an altogether fruitier note. “I got to know the Coupé’s only previous owner, Bob Yorke, very well,” he explains. “At 90 years old, he wanted me to help restore the car to its former glory; when he realised that he couldn’t do any more, he then asked me to take it on alone.

“I tore it down to the chassis, stripped and rebuilt the engine and gearbox [just for new gaskets and seals], and then repainted the car in its original colour. It’s standard save an Abarth exhaust, MSD electronic ignition and a period three-spoke steering wheel. Bob, being old school, also fitted a voltmeter and ammeter in the ’60s. It has been totally reliable and it only costs around £200 per year to run.” 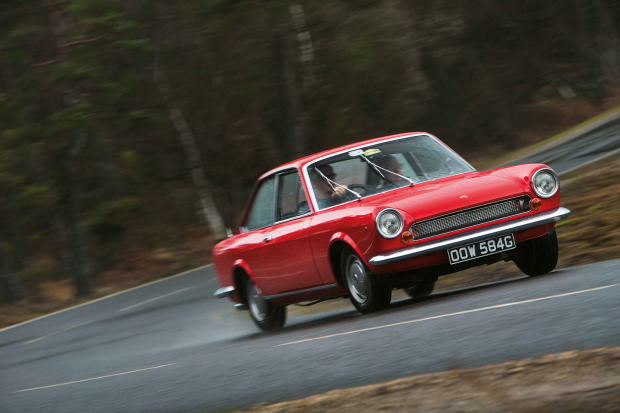 The Lampredi twin-cam is an enthusiastic motor, even if it makes do with a single carburettor (a twin-carb set-up finally became de rigueur on the BC).

What an engine it is, too, easily the equal of the others here. In terms of smoothness it’s just below the Fulvia, but marginally better than the Alfa. It has the same ability to rev to the redline, even if it’s slightly underserved in the pulling department, with just 80lb ft of torque. Surprisingly, though, it’s a shade quicker in a sprint.

The five-speed ’box is a sweet shifter, the fifth cog little more than an overdrive that civilises cabin matters nicely at higher speeds. Following the others on a hard charge through long sweepers and into tighter cornering work, it acquits itself well.

First-series Coupés had a torque-tube set-up, but this was ditched because rear axles kept breaking due to misaligned radius rods. Later cars swapped neutral handling for understeer, and plenty of body roll. 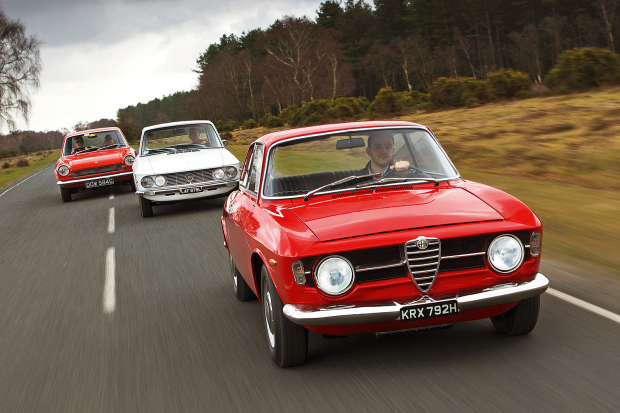 Like the Alfa and Lancia, the Fiat provides a seriously addictive driving experience. It is a cracking car to drive – punchy, smooth and with decent handling. In this company, however, it lurks in the shadows of its more visually appealing Italian companions.

The Alfa has my heart; it is stunning. Factor in a rorty, animalistic drive and it’s the winner. But, as Detective Columbo would say: “Just one more thing.” Bring price into play and the decision isn’t so easy. The Alfa would have cost £1749 in 1969 against £1698 for the Fulvia. Today, buying this (albeit concours) Alfa will set you back around £37,000, compared to mid teens for this top example of a Fulvia.

So now we have a real poser. The Lancia is pretty, refined and without doubt the best-handling car here. In April 1966, Motor Sport asked whether the Fulvia Coupé was: ‘The best small car currently available?’ Then, as now, the answer would be a resounding yes.

Fiat at 120: the Italian marque’s greatest hits and misses

Lancia Flaminia family: the last of the proper Lancias 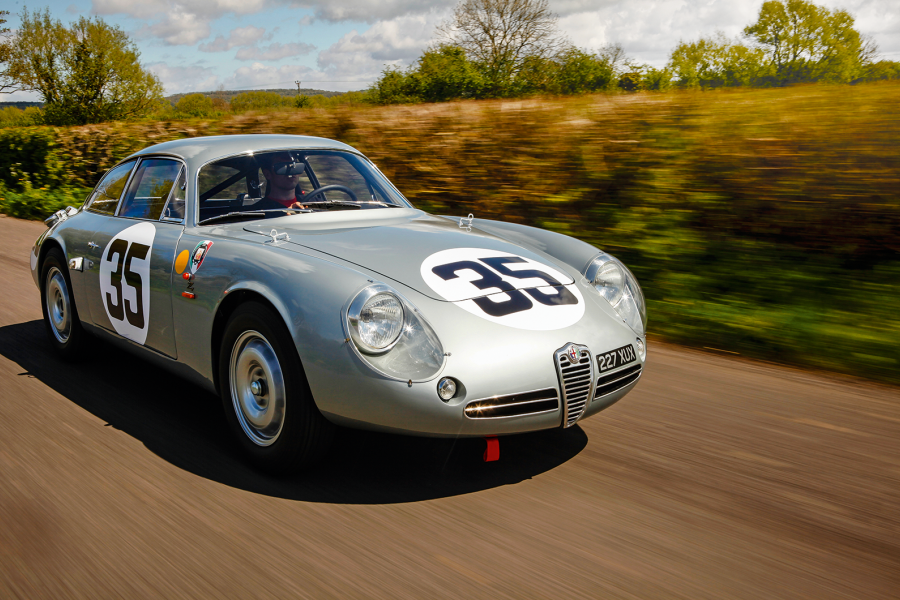 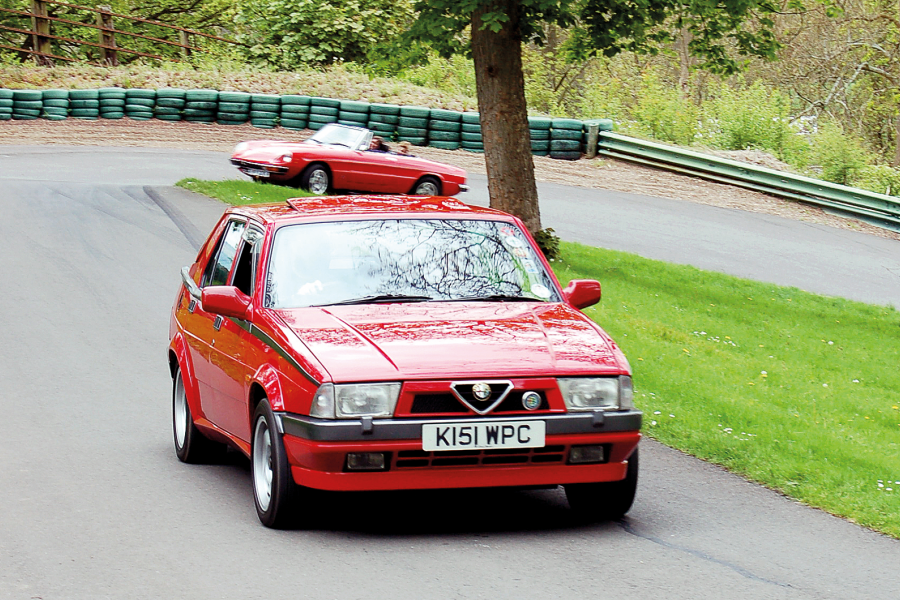 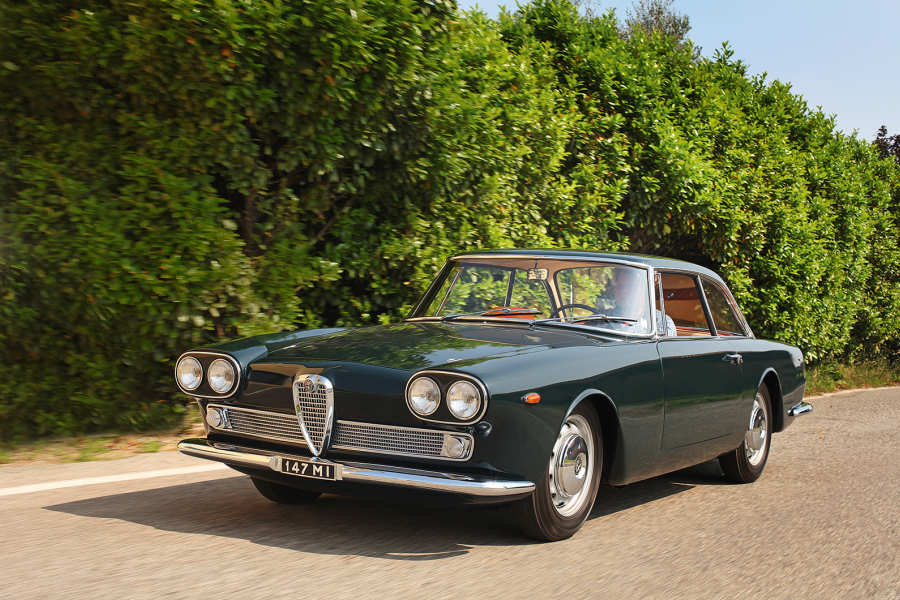