Magnificent Ecurie Ecosse collection to go under the hammer 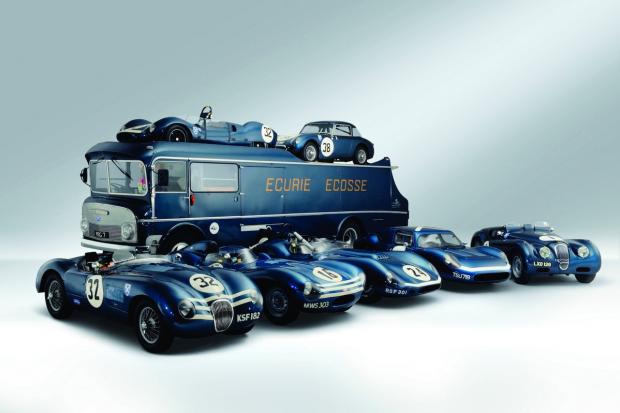 One of the world's most celebrated sets of historic racers – and unquestionably the most famous transporter – is to be sold.

Bonhams has consigned the sensational Dick Skipworth Ecurie Ecosse collection to auction at its inaugural sale in its revamped London HQ on 1 December.

Skipworth, at the wheel of his Jaguar D-type at Salon Privé in London yesterday

Typifying the foundation of Ecurie Ecosse as a Scottish cooperative racing team, this XK120 was campaigned in period by Sir James Scott-Douglas.

A short-nose ‘D’ without the fin – the most beautiful of all variants – and a debut-race winner for the Scottish team, driven by Ron Flockhart.

This unique Tojeiro-Jaguar is one of the most distinctive of all modern-era historic sports-racing cars, having been raced most prominently by Barrie 'Whizzo' Williams.

Campaigned in period, including at Le Mans, by Bruce Halford, Tommy Dickson and – most notably during his meteoric rise to World Champion invincibility – Sir Jackie Stewart.

James Knight, Bonhams’ Group Motoring Director, said: "We are delighted to have been appointed to handle the sale of this magnificent collection. It illustrates Dick Skipworth’s dedication towards acquiring a definitive representation of perhaps Britain’s best-loved motor-racing team. The wonderful transporter typifies his commitment. It was discovered in need of loving revival and then restored at great expense to become the talisman and centrepiece of the collection. We will be able to present the collection, along with other important entries, in our just-completed, state-of-the-art flagship saleroom facilities. December 2013 promises to see another memorable auction at Bonhams."

Some Ecurie Ecosse history from Bonhams

Scottish businessman and amateur racing driver David Murray founded Ecurie Ecosse in November 1951. From a humble garage in a cobbled Edinburgh mews, operating invariably upon a shoestring budget, this proudly Scots blue-liveried team would take on – and beat – some of the biggest names in world-class motor racing, and would win consecutive Le Mans 24-hour races for Jaguar in 1956 and 1957.

Had Murray not crashed at the Nürburgring during practice for the 1950 German Grand Prix, his now-legendary team might never have been born. Backed by fellow Scottish enthusiasts, he had founded Ecurie Ecosse as a cooperative syndicate, running mainly Jaguar sports cars expertly prepared under legendary mechanic ‘Wilkie’ Wilkinson. The team went on to earn both international and industry respect. It would count future three-time Formula 1 World Champion Sir Jackie Stewart and his older brother Jimmy among its drivers, and compete in both sports-car classics and single-seater Grand Prix racing.

The team was disbanded in 1972, but reformed in 1982 under new direction, with its drivers still competing in the British GT Championship and the European Le Mans Series.