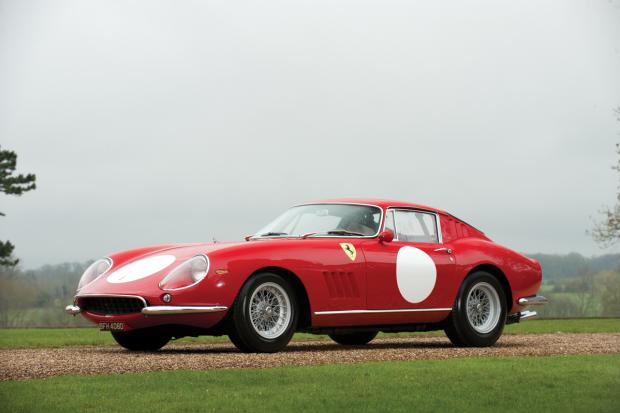 A mesmerising line-up of motor sport greats will headline RM Auctions' Monaco sale on 9-10 May, with a number of high-value Ferraris set to steal show. The prancing horse is represented by no fewer than 17 lots, including four out of five of the highest-estimated classics.

One of the stars of the sale is a 1966 Ferrari 275 GTB/C by Scaglietti, the ninth example of only 12 that were built. It is expected to fetch as much as €5m. The 275 is unusual for a competition model in that it saw little on track action during its early life, first being driven in anger in 1969 at the Colle San Eusebio Hill Climb. As a result, RM describe it is one of the most original 275 GTBs in existence. The Ferrari has been in the hands of its current owner since 1995, and prior to that had just two keepers since 1973.

Sticking with the Italian race car theme is a 1956 Maserati 450S prototype by Fantuzzi, the very car in which Stirling Moss and Denis Jenkinson drove the Mille Miglia in the same year. During that race the car's brakes failed, sending it crashing through a hedge. Still in 350S guise at that point, it was returned to Maserati, which extended the wheelbase to accommodate a new V8 engine while the bodywork was redesigned by Fantuzzi; the 450S was born. It emerged from the factory for its debut at the 1956 Swedish Grand Prix.

After that, the 450S passed through the hands of three private owners, and was converted to Corvette power before undergoing a full restoration in 1987 in consultation with the factory. It is expected to top €5.5m.

Also estimated to breach the €5m barrier is a 1959 Ferrari 250 GT Cabriolet by Pinin Farina. The 240bhp car is the 36th of just 40 produced and was formerly owned by Bob Grossman, William McKelvy and Glenn Mounger. Recently repainted in dark blue, it has covered just 50,583 miles.

A 1966 Ferrari Dino 206 S Spider fitted with a 2404cc Tasman V6 Engine and 312 Formula One five-speed gearbox is estimated at €1.5-2m. One of only 18 cars produced, the 206 S was bought new by a wealthy aristocrat who campaigned the car extensively for three years. It eventually found its way to America, where it was bought by the current owner in 1977. Success on both the race track and concours lawn followed.

Breaking with the Italian theme is a 1958 Lister-Jaguar Knobbly, which is believed to be the first prototype. Bought new by Briggs Cunningham, the car was raced by Walt Hansgen, who became 1958 SCCA champion at the helm. It is expected to achieve between €1.5-1.75m.

A 1968 Alfa Romeo Tipo 33/2 Daytona is also expected to top the €1m mark, this time €1,350,000. The car was raced in period by Nino Vaccarella, Herbert Schultze and Michel Weber and is eligible for countless historic motor races.

Despite being based in one of the wealthiest parts of the world, not all the lots are expected to make millions. A beautifully patinated 1965 Alfa Romeo Giulia 1600 Spider Veloce that is covered with a thick layer of dust is set to fetch between €30-40,000. It retains its original twin-cam engine, though it is currently not in running condition.

Also at the more modest end of the spectrum is a 1960 Autobianchi Transformabile Series II, which is expected to cost its new owner just €22,000. Fresh from a recent restoration, it is described as being ready to show or drive and should make a refreshing change from the dizzying prices of the other lots.

The race suit worn by Ayrton Senna for his 1991 Monaco Grand Prix victory is a standout lot from the automobilia listing. Previously owned by Ron Dennis, the suit is valued between €30-40,000.