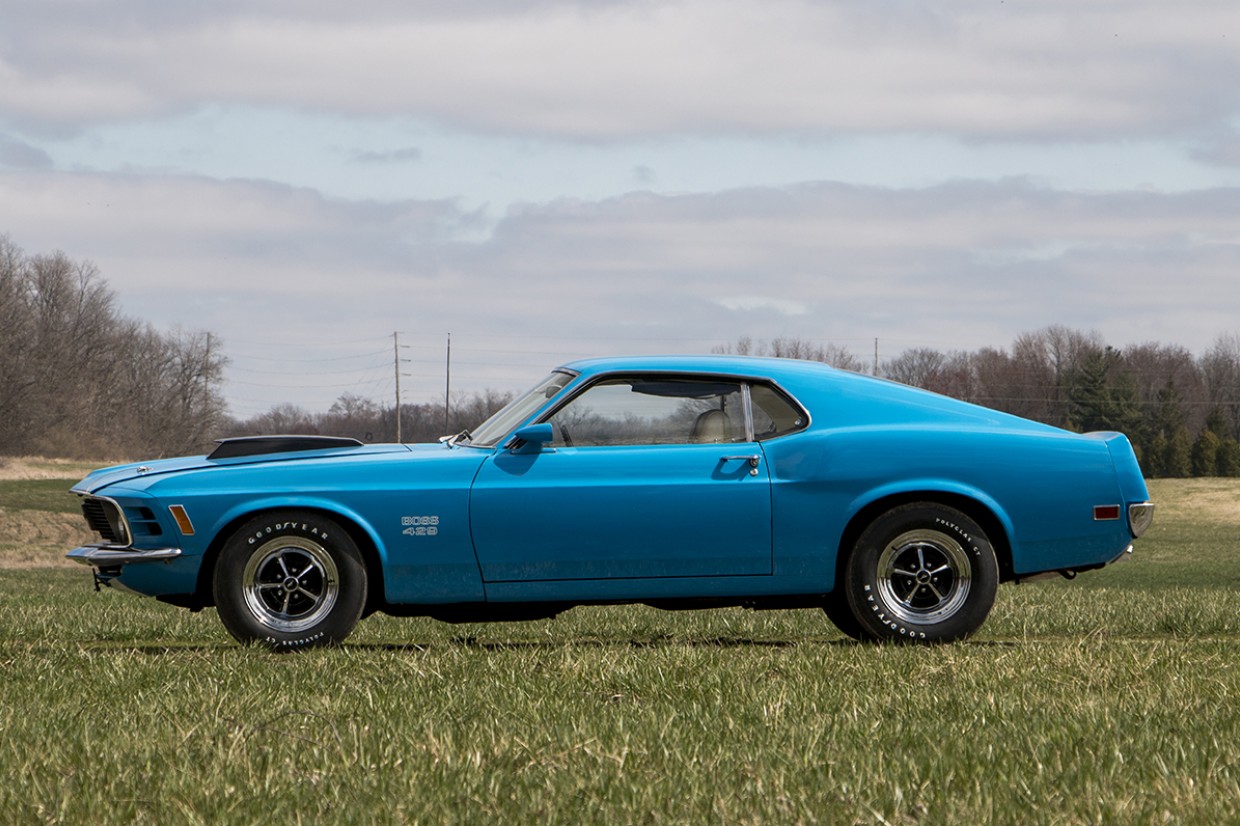 The summer show season is now upon us, and up and down our sceptered isle cucumber sandwiches are being opened and deck chairs unfolded behind rows of Austin 1300s, MG Midgets and Ford Anglias – but have you ever wanted a bit more from your classic? Something bigger, bolder, and with a reckless disregard for the shrinking ozone layer? Auctions America’s forthcoming 5-7 May sale could have just what you need.

Near the top of the pile is an original 1970 Ford Mustang Boss 429, one of just 500 examples built in that year. Boasting Ford’s fearsome 429cu in V8 mated to a top-loader four-speen transmission and Traction-Lok rear axle, the Mustang offers a rare example to buy such a well-specced car, with the options list including the desirable Drag Pack and Rim-Blow steering wheel.

The car has covered just 16,700 miles and has never been restored, its originality contributing to its $250-260,000 pre-sale estimate.

“With just over 16,000 miles and all original except the gas tank and a few maintenance items, this Boss 429 is a rolling time capsule from a period of high horsepower street cars meant for the track,” says Auctions America’s Matt Traylor.

“These Boss 429 Mustangs could be considered sleepers as aside from the unassuming appearance of the car, the only indication as to what sits under the hood is the small decal on the front fender.”

Prefer to have the wind in your hair? You could do much worse than a 1948 Chrysler Town & Country convertible. Dripping in wood panelling and finished in green with matching leather interior, the car will be as at home at the golf club as it is on the show field. The convertible top is fully power assisted, while power comes from the New Yorker’s heft Spitfire 325.5cu in inline ‘eight’.

“There is no shortage of elegance with the Chrysler Town & Country,” says specialist Donnie Gould. “They were the most expensive model in the Chrysler line-up as evidenced by the quality wood paneling, lavish accessories and Art Deco-inspired interior.”

Considerably less elegant but still incredibly desirable is a 1970 Pontiac GTO Judge Air III Hardtop Coupe, estimated at $85-100,000. The 366bhp muscle car spent the majority of its life with the same owner before being purchased by the vendor several years ago. The car has since been the subject of an extensive restoration including a respray in its original Orbit Orange hue.

Just $10,000 more could be enough to secure a Shelby GT500 Fastback. The 1968 car offers more restrained styling than the GTO and comparable power from its 428cu in V8. Like the Pontiac, the Mustang has also been restored, this time in 2003. Since then it’s been kept in a climate-controlled garage.

As well as boasting a number of factory options, including a 10-spoke aluminium wheels, Lucas fog lamps, tilt-away column and a wooden steering wheel, it will also be sold with a Shelby certificate of authenticity.

There will also be an opportunity to get up close and personal with another icon to celebrated the 100th anniversary of Mr Peanuts!