Barnfind of the century revealed in France 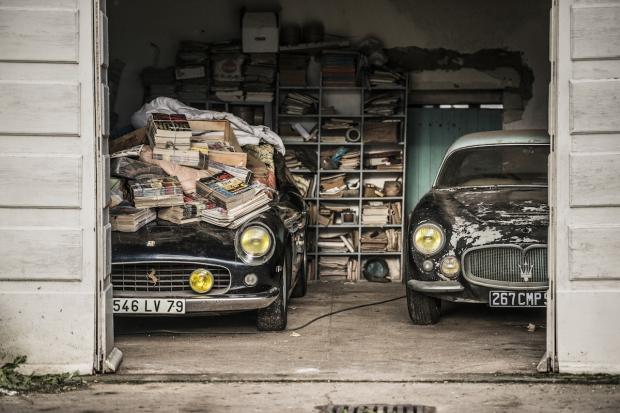 An incredible French barnfind has revealed the most astonishing collection of lost classics discovered this century. The priceless collection of 60 cars includes an ex-Alain Delon Ferrari California Spider, the location of which had been a mystery for decades.

The Roger Baillon collection was stashed in the west of France and many of the cars are thought to have lain dormant for more than 50 years.

Other stand-outs amassed by the transport magnate for a museum that never opened include a one-of-three Frua-bodied Maserati A6G Gran Sports, but all the great European marques – Bugatti, Hispano-Suiza, Talbot Lago, Panhard-Levassor, Maserati, Ferrari, Delahaye, Delage and many more – are represented.

Many of Baillon's vast car collection were sold off when his business went into decline in the 1970s, but these cars did not emerge then and were not known of outside of his immediate circle until now.

Matthieu Lamoure, Managing Director at Artcurial Motorcars, described stumbling across the collection after a tip-off to specialist Pierre Novikoff: "It was a fairly indescribable feeling. On entering the gates of this property, we had no idea what we would find. We had to go in through the gardens at the rear of theproperty, to get a first look.

"Across three hectares, we  could see different makeshift structures. Low shelters covered with corrugated iron. From there, we realised that this was something big. We still didn’t know what we were looking at, but could make out coachwork, weathered by time and the elements. Some modern shapes and others that were older."

Novikoff added: "Little by little, thanks to the owners, we learnt the story and the pieces of the puzzle began to fall into place.  We were standing in front of the Baillon collection. Well documented, it had given rise to a large sale during the 1970s. It was thought that everything had been sold, and its existence had been forgotten about. And here, we had just found the lost collection!"

The collection will now be sold at Artcurial's Rétromobile auction in Paris in February.

Click here to see Artcurial's film of the collection in situ.