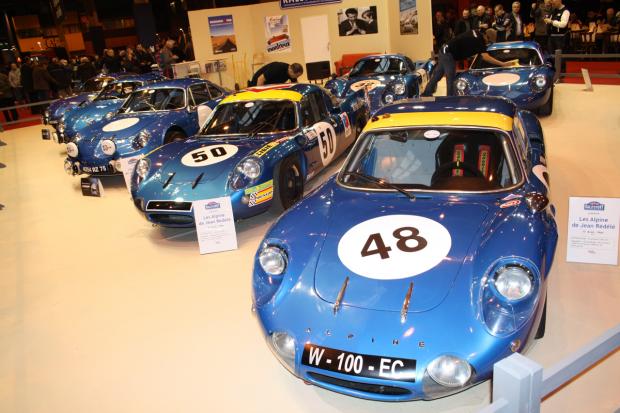 Visitors to the 39th Rétromobile, which opened yesterday, are already citing the revamped event as one of the best ever. Now held in a new, much larger single hall, the premier Parisian show is treating enthusiasts to not one but six themed displays.

Among the star attractions is a spectacular tribute to Alpine founder Jean Rédélé (main image), featuring a stunning selection of road and race cars from 1963 M3 via A110 to V8 A222 Le Mans competitor, vying for attention with a stunning selection of 'Cars of the Maharajahs' headed by the Louwman Museum's wonderful Swan Car and Cygnet child's car (above). Theatrical as ever, the show even features a real elephant to give the Indian-style backdrops a more authentic feel.

In addition to the swan duo, the set of ex-Maharajah stunners include the Mullin Museum's 1935 Delahaye 135 Figoni et Falaschi, a 1930 Mercedes SS (above), plus several Rolls-Royce Phantoms, a 1925 Alfa Romeo RL SS and a 1929 Isotta Fraschini Tipo 8A.

Once again demonstrating the variety of machinery that this annual event has become famous for, the other main displays comprise a superb selection of Lancias curated by Swiss specialist Lukas Huni (above), a commemoration of the centenary of the First World War breaking out (including a 1912 De Dion-Bouton V8 munitions carrier and Renault FT light tank, below), a celebration of 35 years of the Paris-Dakar rally plus a Land Speed Record tribute, with the ex-Parry-Thomas 'Babs' and the National Motor Museum's rejuvinated 350hp Sunbeam being wheeled out and started up to the delight of the crowds.

As you might expect, the majority of the Paris-Dakar machinery on show is French – from Renault 4 with bizarre roof-mounted exhaust to Peugeot 205 T16 – but stealing attention from the main display is a magnificent Rover 3500 4x4 with the nearby British Classic Cars & Rover Club (below). One of two SD1s built up with Range Rover underpinnings for rallying, the Rothmans-liveried machine is the sister car to the Maxell-backed 1985 Paris-Dakar entry.

The French manufacturers always pull out all the stops for Rétromobile, and this year is no exception. Among the highlights are Renault's celebration of the 30th anniversary of the Espace, which includes the 1959 Renault Project 900 and Matra M14 Espace prototypes (above), plus a pair of 1956 one-offs: the Peugeot 403 coupé by Rene Bernard (below) and the Citroën C10 prototype.

Rétro wouldn’t be Rétro without a bizarre Voisin rarity, of course, and LDA Classic Car has this year obliged with a wonderful 1955 Avions Voisin ‘La camionette’ prototype, complete with wacky 1957 Derny Taon 125 motorcycle on the back.

Wonderful set of racers from the Mercedes-Benz Museum