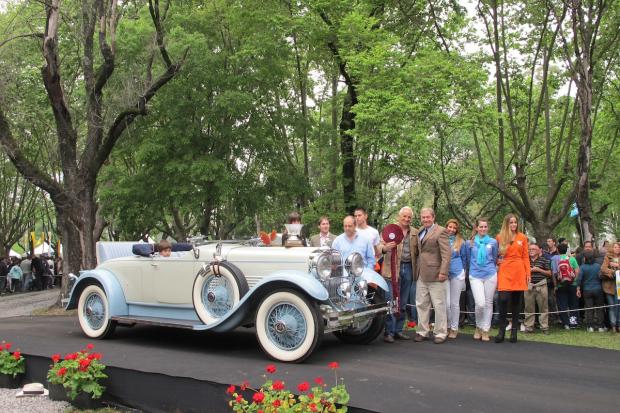 A stunning 1929 Stutz roadster with rakish Le Baron bodywork won Best of Show at the 12th Autoclásica in Beunos Aires, Argentina on 5-8 October.

First owned by the famous Argentinian boxer Luis Ángel Firpo, the Stutz was restored by talented local specialists, and pipped a spectacular group of coachbuilt Delages and a Pegaso.

Among the special prizes was a new C&SC trophy for the 'car that stole our hearts'.  With so many fascinating, ‘never seen one of those before’ classics to choose from, C&SC’s Editor in Chief Mick Walsh eventually selected a rare 1978 Bianco S (above).

Owner Jorge Lizardo took six years to restore the Brazilian-built VW Beetle-based GT, which was displayed at the New York Motor Show and then developed for racing, before being returned to road use by the fastidious Lizardo.

The 1000-plus classic car and motorcycle event is enthusiastically supported by Argentinian and Uruguayan cars clubs, which all compete for best presented stand.

Highlights in 2012 included Club IAME, which celebrated the 60th anniversary of the Peron-founded company based in Cordoba.

Special displays included Ferrari (above), 110 years of Cadillac (below), plus a tribute to the coachbuilder Touring.

Argentina’s long tradition of motor sport was celebrated with a dramatic display of early race cars including Edwardian giants headed by a Grand Prix Renault (second from bottom) and Napier.

Local racing legend, Froilan González (below) made a special appearance on Saturday. Now the oldest surviving Grand Prix winner – his first victory was at Silverstone in 1951 – the Pampas Bull looked fit and healthy after celebrating his 90th birthday on the Friday.

González was reunited with his old Ferrari 166, now vividly finished in national race colours and owned by the Automobile Club of Argentina.

Autoclásica was founded and is organised by dedicated volunteers from the Club de Automóviles Clásicos de la República Argentina. They worked doubly hard this year to combat heavy overnight rain that turned the autojumble into a Glastonbury-type quagmire.

The event takes place in the Hipódromo de San Isidro, a suburb of Le Capital, over the Columbus bank holiday weekend.

Next year’s Autoclásica will feature Aston Martins and the fantastic SP race cars.