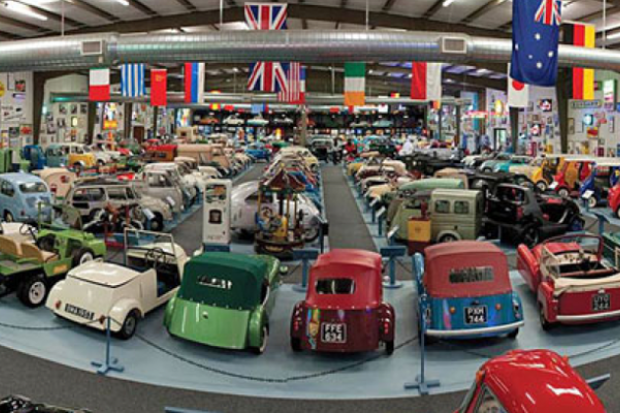 A collection of around 200 microcars – amassed over 15 years by businessman Bruce Weiner – will be sold without reserve at RM’s Madison sale, in Georgia USA, from 15-16 February.

Lots include the smallest production car ever built, a 1964 Peel P-50, a 1955 Kleinschnittger F-125 and two Voisin Biscooters.

Also on offer will be the world’s only complete Messerschmitt collection spanning from a 1953 KR175 to the last surviving 1961 KR201 Sport, a 1957 KR201 Roadster and a sought-after ‘Tiger,’ which, with a top speed of more than 70mph, was deemed the fastest microcar ever built.

Weiner’s collection covers bubble-cars, too, with a pair of BMW 600s and every imaginable version of the Isetta 300 – such as an original German police car, a “Jagdwagen” (hunting car), an ultra-rare 1957 Isettacarro ‘Pickup Truck,’ and the Bubble-Window Cabriolet.

One of the more surprising highlights is the 1959 BMW Isetta nicknamed ‘Whattadrag.’ Inspired by the famed Hot Wheels model, it has a 730bhp Chevrolet 502 engine and is fully operational. See a teaser film of it in action here.

Touted as the finest collection of microcars in the world, this is the first time the majority of the lots have been offered for sale.

Weiner said: “My collection has brought me incredible joy over the years, but simply finding and restoring these cars is not enough for me. In order to fully appreciate them, I need to share them.”