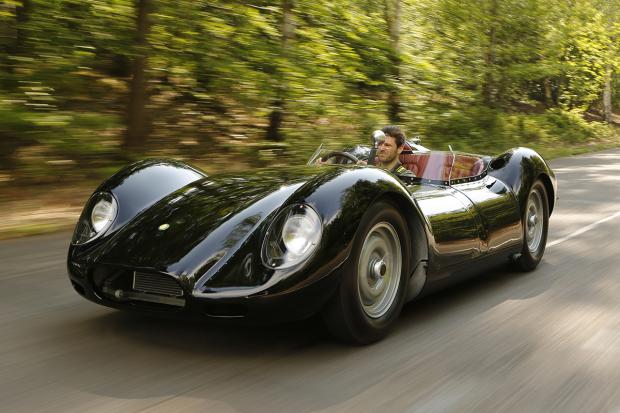 It’s always the best looking girl at the bar who is the most intimidating, and I’m quickly coming to realise that the same can be true of classic cars. Despite its sumptuous handcrafted aluminium curves and beautifully sleek low profile, the Lister Knobbly is a bruiser of a race car that demands respect. It’s a feeling reinforced by a glance at the famous names to have tamed the car in the 1950s, a list topped by Sir Stirling Moss and long-time Lister favourite Archie Scott Brown.

It’s the latter’s victory in the British Empire Trophy in the Knobbly’s debut year that is running through my mind as I clamber into the leather-trimmed cockpit and secure the four-point harness, initially struggling to find a seating position that doesn’t leave me feeling either too short or not quite tall enough. Once your left leg is fed past the thick-rimmed steering wheel and onto the clutch pedal things begin to get a bit more comfortable – just in time to turn the key and blow away any preconceptions about this being a civilised drive. An explosion of noise from the twin side-exit exhausts is amplified by the spartan interior and thin aluminium panels, which reverberate to the straight-six’s lumpy idle, while heat from the exhaust channel – which runs through the passenger footwell – can be felt within seconds.

Unlike modern Le Mans contenders with sequential gearboxes and all mod cons, coming close to achieving the Knobbly’s astounding performance figures takes some practice. It’s good for 181mph in top and 0-60mph in just 4.3 seconds, the same as a Bugatti EB110 and quicker than Ferrari’s twin-turbo 288GTO or Lamborghini’s first Diablo. The first obstacle is the three-piece race clutch. “You have to be ready for it, and don’t be afraid to give it some revs,” says Lister’s lead engineer on the project, Graham. Despite his warning, my first attempt – and subsequent three attempts – ends in a disappointing stall, before a more aggressive approach is rewarded with a hail of stones being kicked up by the rear wheels.

The next challenge is mastering the gearbox, which Graham warns is more agricultural than the later E-type unit. He’s right, too: it feels as if it’s made from wrought-iron girders. But in a very positive, reassuring way. There’s no vagueness and as a result no doubt: you know exactly where it’s going to go in the heat of the moment. Which is useful, because driving the Knobbly at any speed is an assault on the senses that consumes your attention.

Pulling out of the ‘pits’ and onto Longcross Proving Ground’s test circuit, our first task is to tail snapper Tony Baker’s Volkswagen estate at around 40mph. The big six’s oily plugs take a lap to clear, time that is spent getting to grips with the car’s characteristics. Despite the low speed it darts and pulls from side to side, tracing each crack and seam in the road surface thanks to its race Dunlop crossplies, which require full attention to keep pointing at the rear of the Passat. Meanwhile, wind rushing over the car’s low screen buffets your face, adding to the theatre of the six’s resonant exhaust note.

These speeds are not the Knobbly’s forte, and before long the temperature needle begins to creep around the gauge – something the engineers were keen we keep an eye on. With no fan (they didn’t have them in period), the only solution is to feed more air through the engine bay by picking up speed. Pulling past the camera car and planting the throttle is rewarded with instant – and quite remarkable – acceleration. Any intake noise the racer’s triple Webers make is drowned out by the roar of the engine and the howl of the exhaust. After a few short seconds and a quick change to third, the Lister hunkers down and is touching 100mph on the back straight, becoming more stable and less twitchy at speed. The car has much more to give, but the blur of trees lining the circuit’s perimeter, the limitations of 1950s tyre technology and a rapidly approaching horizon urge caution, so it’s onto the brakes ahead of a sweeping left-hander.

Lister’s functional, no-nonsense approach to engineering is also applied to the steering, which is fantastically precise and totally direct. None of which should come as a surprise: lift the bonnet and you can see the column from start to finish, working its way from the bulkhead past the engine, bisecting the tubular chassis members. On the road, you can place the car exactly where you want it, the lightweight racer responding instantly to the slightest input at the wheel. The only problem when trying to kiss an apex is finding it in the first place: even the tallest of drivers will struggle to see the corner of the car through the flamboyant front wings, which rise up like waves cresting each of the Dunlop M-type front wheels.

It doesn’t take much to find the limits of the car’s grip, such is the feedback from the crossplies, but for a better demonstration we pull back onto parc fermé and hand over to the lads from Lister, who have worked exclusively on the car and know it better than most. Where we got a sense of the Knobbly’s capabilities on circuit, Graham paints a fuller picture during our cornering session, flicking the tail round with a bark from the exhaust and spinning on the spot, judicious use of the accelerator rewarded with a tyre-smoking doughnut on a quiet section of the track. It’s enough to draw the attention of a security guard, who comes over first for a quiet word, then to enjoy the Lister’s stunning soundtrack during our high-speed panning shots.

The performance of the Lister Knobbly isn’t in doubt, but it’s only half the story of the car’s appeal. Part of the draw is the sense of history that it imparts on its driver. It may not be truly old, but the firm’s commitment to period manufacturing techniques and dedication to producing such an exact replica has served to capture plenty of the magic of the 1950s original. You feel closer to the triumphs of Moss and Scott Brown in the continuation Knobbly than in anything other than the genuine article and, thanks to full FIA papers, you might as well be.

Then there’s the uniqueness of the proposition: a brand-new, hand-built and race-ready 1950s sports car. It’s a ticket to some of the world’s most exclusive events: a sumptuous period-correct masterpiece that is capable of out-sprinting some of the fastest, most desirable cars in the world. The only things that come close are Jaguar’s continuation Lightweight E-types and the recently announced XKSSs. Not only do you have to be in Jaguar’s little black book to buy one, but they both cost in excess of £1million. In contrast, a new Knobbly can be had for around one third of that figure.

Just ten cars have been built, with nine having already been delivered to their lucky owners. That leaves just one. This one. As the first continuation model built, it’s spent its days as the company’s demonstrator – the car that convinced all the other owners to get out their chequebooks. It’s also a bit of a famous face, having been driven for countless magazine articles and internet videos. The car is now for sale, and it represents your quickest route into a continuation Lister.