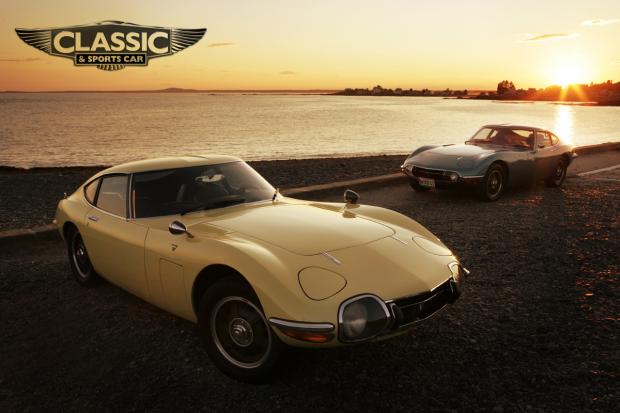 The fabulous Toyota 2000GT proved that the Japanese car industry was capable of more than mass-production. Mick Walsh drives a trio of eastern rarities.

What a difference 10 years can make. In 1955, 700,000 visitors jostled around the open-air Tokyo Motor Show in Hibiya Park to admire such western cast-off designs as the Hillman Minx and Henry J, both built under licence in Japan. Fast-forward a decade and it was a different world inside the Tokyo International Trade Center in Harumi.

Talk of the ’65 show was a dazzling white coupé with sleek fastback style, riding on glitzy chrome Borrani wires. Smitten Japanese car fans were made to ogle from behind the barriers and Toyota wasn’t giving much away about specification other than its 2-litre capacity and plans for both road and race versions. The more eagle-eyed car nut might have spotted a backbone chassis, independent suspension and disc brakes, but the chances of any of the 1½ million visitors getting behind the wheel were as slim as landing a date with Bond girl Akiko Wakabayashi.

This was to be a hand-built, high-priced exotic, a flagship to prove that Toyota could build more than trusty Publicas and Crowns. The cute 790cc Publica Sport had kicked off Toyota’s image upgrade a year earlier, but here was a dream GT to rival the best from Coventry, Stuttgart and Detroit. Although its influences were clearly European, with blatant E-type styling cues, the 2000GT was much more than a copycat and was to prove considerably more exclusive than anything outside Modena.

Forty years since the Yamaha works started delivering cars to showrooms, few western enthusiasts have even seen one, let alone driven it. Lucky members of the exclusive 2000GT drivers’ club are smitten by the most valuable Japanese car ever built, none more so than Peter Starr and Bob Tkacik. Inside their immaculate workshop in Biddeford, USA there are more GTs than in the whole of Europe and more spares than Toyota has in stock. These retired car dealers are no blinkered obsessives: they could – and do – drive almost any Ferrari or Porsche. But from all perspectives, be it engineering, build quality, styling and, above all, driving, they firmly believe the 2000GT is one of the best sports cars ever.

What better place to find out if they are right than the back roads of Maine? Here, too, was a chance to tap their considerable knowledge and lay bare some myths about the design’s origins. Was it really based on a former Nissan concept? And why is a famous German count continually miscredited for its styling? But first let’s see how the 2000GT stacks up from behind the wheel.

The USA accounted for 62 of the 2000GT’s total production of 337. Toyota had hoped to sell 1000 cars per year and such overestimation is part of the reason why production was stopped. As a result, low-mileage cars such as this rare Bellatrix yellow coupé are still occasionally unearthed, but there are few 2000GTs Starr and Tkacik don’t know of. First impression as you approach is of an E-type that’s shrunk in the rain, but look harder and its appeal is subtler than the brash Brit. Thin A-pillars maximise the wrap-around windows, reaching an aggressive point at the rear. The clean, sleek form has an individual signature, set off by chunky magnesium centre-lock wheels. While the side profile is smooth and clean, the front and rear lose the plot a little – particularly the tail-light clusters, which could have come straight off a Crown saloon. The lower headlights, set in a trapezoidal pod, and the grille could have been conceived in a ’50s LA custom shop. The secondary pop-up lights were a later feature to fulfill height regulations.

Slip into the low cockpit and the feel is more European. The rosewood dash, with neatly organised and comprehensive black-faced dials, the black three-spoke mahogany-rimmed wheel and the stubby gearlever have the charm of a quality English independent while the low, slim-fitting vinyl seats are thinly padded and more sporty. It’s a snug fit for me: a six-footer such as Sean Connery would feel cramped, with scalp rubbing the black headlining. Like the rest of the car, it all feels beautifully made. Clearly those Yamaha workers appreciated the opportunity of building something special for client Toyota.

Best of all is the way the 2000GT drives. Toyota engineers analysed the DNA of European rivals and dialled-in their best features. No sports car passes muster without great steering and the GT’s rack is superbly weighted, blissfully accurate and full of feedback. With just 2.7 turns it’s as good as a Lotus and ideal for the twists around Biddeford and Kennebunkport. Good steering can help you forgive any car its failings, but the rest of the 2000GT matches its finesse. The gearchange demands a positive action, but the throws are short and precise. Any stiffness at urban speeds smooths out at higher revs on open routes. Tkacik is a great ambassador for the 2000GT and confidently encourages revving closer to the 7000rpm redline when we reach his favourite Oak Ridge Road. Here the straight-six sounds and feels bigger than a 2-litre as it delivers clean punch and gutsy torque. The block may have humble origins but, topped with Yamaha’s twin-cam head and a trio of Mikuni 40s, it loves to rev like a tuned BMW six. From apex to apex, it pulls hard through each gear and feels unburstable. Better still, this GT loves corners. With a low centre of gravity, high roll centre and the engine set well back in the chassis, the Toyota handles with thoroughbred poise. It turns in superbly and sits flat. Tkacik reports that it drifts progressively on the limit: “It’s very forgiving and controllable, you can see why it did so well in the SCCA.” Only the brakes demand effort because Tkacik prefers to remove the servos for a more direct pedal pressure.

Toyota claimed around 10 secs to 60mph but it feels quicker. Wary of the local police (who thankfully know Tkacik) we find an open stretch with little traffic. Here, in the early morning, we let it run hard in the higher gears to see how it feels at three-figure speeds. With little wind noise and rasping exhaust behind, the Toyota feels safe, supple and controlled. The engine loves to rev but I back off as we nudge 110mph in fourth – it’s easy to see why Tkacik and Starr think nothing of long trips in the 2000. Snick up to fifth and it becomes a relaxed high-speed cruiser in the class of an Italian exotic, with the bonus of the best visibility of any GT I’ve driven. It’s hard to think of a feature to criticise – only the awkward pedal positioning spoils the controls, but that could be adjusted. The seat felt too short, the hooked central handbrake was uncomfortably placed and the gap between first and second gears became more evident the more I drove, but these are minor niggles.

Road & Track was one of few magazines to test the 2000GT. ‘[For] ride and handling, nobody in his right mind could need or want more in a road vehicle than the 2000GT has to offer,’ the report concluded. ‘Cornering is so easy as to make the usual vigorous driving almost dull.’ After a diet of muscle-bound Corvettes and Mustangs, it must have felt fantastic. But convincing buyers to cough up $2000 more than for an E-type would have been tough for American dealers.

To see how Toyota planned to develop the 2000GT, Tkacik encouraged me to try his Twilight turquoise S2, one of just seven built. With a 2.3-litre single-cam Crown Type-R engine, higher roof and softer ride, this final version doesn’t have the exotic character of the original. Gruffer, with meatier torque and more roll through the turns, it feels like a beautifully engineered, high-quality 240Z. Aircon and auto options indicate where the GT was heading. After the taut, eager response of the S1, the MF12L was always going to be an anticlimax.

It’s easy to see why Toyota bosses were tempted to develop the GT. No doubt they’d been impressed by the way Mercedes promoted its post-WW2 revival with the dazzling 300SL ‘Gullwing’. When the decision to build the coupé got the green light, a hand-picked team was selected from Toyota’s ranks, led by racing manager Jiro Kawano. Just five people were originally chosen for Project 280A in the summer of ’64: Shinichi Yamazaki (chassis and suspension), Hidemasa Takagi (engine), Satoru Nozaki (styling), Shihomi Hosoya (test driver and assistant designer) and Eizo Matsuda (test driver).

During pre-design, Toyota acquired several European sports cars including MGB, Triumph TR2, Jaguar E-type, Abarth Bialbero, Porsche 911 and race-spec Lotus Elan 26R. The E-type’s performance impressed and the design became the benchmark for the team, but it was the Elan’s backbone chassis and all-independent suspension that was adopted. For generations, Japanese designers were happy to copy the west, so why not rework Colin Chapman’s brilliant concept?

Kawano set five objectives for the new car: high performance, enough civility for daily use, meeting the necessary regulations for export, high quality taking precedence over high volume, and providing a good basis for a GT-class racer. Before designers Nozaki, Takagi and Yamazaki set up at Yamaha to design the 2000GT, such key specification as the dohc six-cylinder engine, backbone chassis, fastback roof and retractable headlights were confirmed.

Prior to taking on the design and development of the project, Yamaha had already built a secret GT for Nissan. Christened A550X, this fully unitary design was powered by Yamaha’s own 120bhp four-cylinder engine. Features included retractable lights and disc brakes but, after a mule had been completed, relations soured between the two corporations when Yamaha’s contract for Nissan Silvia body production was terminated. This prototype is mistakenly linked to the 2000GT’s development, but it did confirm to Toyota that Yamaha was capable of building Project 280A. The stillborn Nissan was never shown to the public and its fate is unknown.

Quite how Graf Albrecht von Görtz, the successful German industrial designer who created the glamorous BMW 507, came to be credited with the Toyota’s sleek style is a mystery. Even Toyota USA repeated this myth in a recent advertising campaign, which must have irked the old team back home. At some point Görtz’s New York design studio was employed as a consultant to Nissan, including for the A550X concept, but Toyota’s GT was an all-Japanese effort from the start. Early sketches by stylist Nozaki clearly show how the final shape evolved through to 1:5 scale models and full-sized wooden buck.

The majority of 2000GTs remain at home where it’s highly prized. Not until Honda built the brilliant NSX did the supercar mantle carry over while Toyota focused on market domination. Little wonder the GT is regularly wheeled out to boost its image. Following its F1 indulgence another Toyota supercar is on the way. Whether it wears a Lexus or Toyota badge, it’ll have to be very special to eclipse the 2000GT.

This article was originally published in the March 2007 issue of Classic & Sports Car magazine, which retains the copyright to all words and images. Click here to see the terms and conditions.