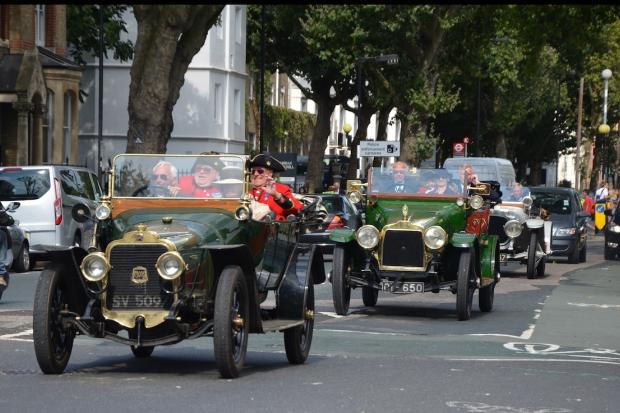 Forty Edwardian cars carrying Chelsea pensioners around key London war locations formed a colourful part of the Great War remembrance events yesterday to mark the beginning of the tragic conflict a century ago.

The historic convoy, mostly with rear brakes only, battled through modern rush-hour traffic to collect the war veterans from the Chelsea Hospital.

The cars and one solid-tyred 1909 Commer estate vehicle (above) then motored along the Embankment and around Parliament Square where war was declared at 11pm on 4 August 1914, and on to Lancaster House via historic memorial sites including the Cenotaph.

From St James’s, HRH Prince Michael of Kent joined the group, and took the wheel of New Zealander John Kennedy’s magnificent 1913 Rolls-Royce Silver Ghost Alpine Tourer to lead the parade across the river to the revamped Imperial War Museum (below photo of HRH).

All along the route the happy pensioners waved to the crowds, chatted to tourists and posed for photographs with the historic vehicles.

The vehicles were selected to represent life before the war, and included just one military staff car – American Daniel Ghose’s 1915 Vauxhall D-type (below). “It’s one of only two survivors of 2000 built, and is believed to have been used to drive King George V on a battlefield visit including Vemy Ridge,” said Ghose.

Many of the cars participating were loaned by wealthy owners to the services during the Great War, including 80-year-old Brian Moore’s 1915 Rolls-Royce Alpine Tourer. “It was used by the Royal Navy Air Squadron in 1915, and after the war was mysteriously purchased by Mercedes for evaluation,” said Moore, who drove down from Cambridge for the event.

The main instigator for the parade was Pellett (above), who proudly wore his grandfather’s WW1 medals. “He was killed in the tank battle at Cambrai in 1917, so this is a very emotional day for me,” said a tearful Pellett, who drove his rare 1914 Newton Bennet 12hp.

The event started the previous day at Brooklands at a Great War remembrance event, which included flypasts by replica WW1 aircraft. It continues this week with a tour of WW1 battlefield locations and cemeteries in France and Belgium.