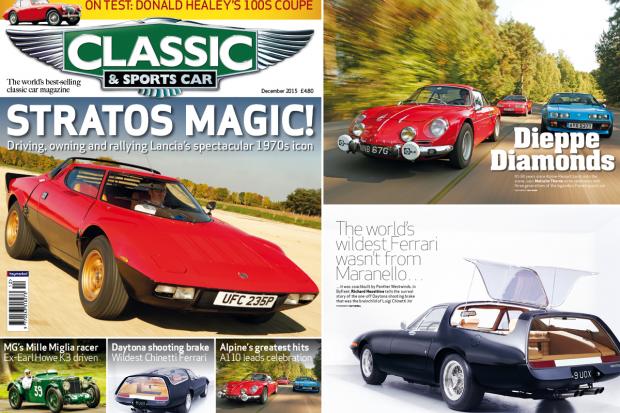 A fire-breathing Lancia Stratos, spectacular glass-topped Daytona shooting brake and a trio of Alpine’s greatest hits all star in the December issue of Classic & Sports Car, which goes on sale today (5 November). They are joined by Donald Healey’s personal 100S development coupé, a supercharged MG ‘six’ and a handful of Russelheim’s more glamorous exports, plus step back in time with a stunning motorsport scrapbook.

Taking pride of place on this month's cover is one of the most iconic rally cars of its generation – the Lancia Stratos. Dripping in style yet ferociously quick, the competition Stratos dominated rally stages throughout the 1970s, while the road-going version made jaws drop wherever it went. James Page gets behind the wheel to find out if the real deal lives up to the legend.

Next up is one of the most eye-catching Ferraris ever created, Panther Westwind's Daytona shooting brake. With its incredible gullwing windows and near-vertical tail, this one-off car is like no other. Richard Heseltine catches up with Luigi Chinetti Jr, heir of the legendary Ferrari importer, and visionary who's idea became one of the most talked about examples of its type.

What's the only thing better than an Alpine? Three Alpines of course! We've gathered together landmark examples from the firm's 60-year history, from the A110 Berlinette 1300G to the A310 V6 and GTA V6 Turbo. Malcolm Thorne tries each to see if the magic of the flighty, rev-happy A110 can be matched by the more powerful – but much heavier – later iterations.

When an engineer as talented as Donald Healey has a favourite car, you know it's going to be something special: so it is with his Austin-Healey 100S coupé, one of just two ever created. Healey often used the car for spirited runs from Warwickshire to Cornwall, making tremendous time in the process. James Page takes the controls to find out what made this rare coupé a favourite of its famous owner.

It's difficult to believe that a car developed in just 20 weeks could challenge for honours in one of the world's greatest endurance races, but such was Earl Howe and Cecil Kimber's enthusiasm for the supercharged K3 project that not only was it in the running, it took class victory. Mick Walsh takes us on a journey through history via a rampant drive around the peer's Buckinghamshire estate in the famous MG.

If that isn’t enough to fire your imagination, this month’s incredible Spa-Francorchamps scrapbook certainly will. John Dryhurst’s first trip abroad involved a stop at the 1962 Belgian Grand Prix, and his photographs capture an era of racing that now we can only imagine. From candid paddock shots through to thunderous action photographs, his camera caught it all.

A barn-find Porsche 911S sees the light of day for the first time in decades in Lost & Found, while James Elliott, Simon Taylor, Mick Walsh and Martin Buckley talk early Honda Insights and Jensen F-Types in their monthly columns.

Before you pick up your issue, why not download one of our fantastic free wallpapers? Simply click the images below to enlarge – but make sure you read the terms and conditions first.