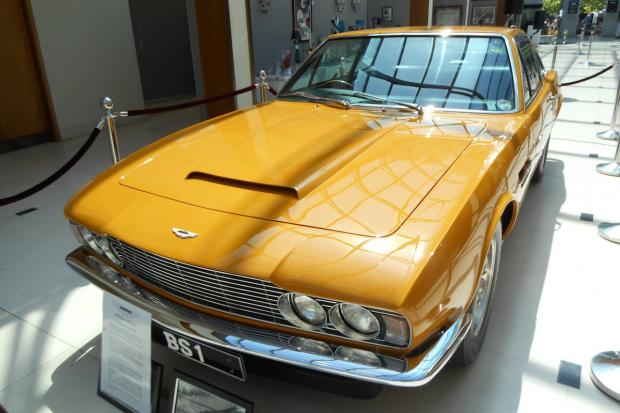 We all love the big classic car events, but, equally, so often we all seem to come away moaning – too many people, too high a proportion of non-enthusiasts, too many comedy fake moustaches and hired-for-the-day military uniforms.

Well, whenever the market is on a high, there also crops up a whole series of 'boutique' events, conscioulsy elitist and appealing to those that not only care, but have money to burn. Oh, and a few journalists who get in on a freebie. Like me.

The latest of these was Salute to Style. There were a couple of familiar themes about this – namely Michael Scott and the picturesque Hurlingham Club in Fulham, a great combination that has worked excellently over, well, decades.

Many remember the Louis Vuitton events at the South West London venue that were a huge success, if your measure is pages in Hello!, and Salon Privé was there for years, of course, but since then many shows have come and gone and nothing has quite stuck.

So inveterate Hurlingham loyalist – and indefatigable classic gatherer – Scott (also founder of the renowned 96 Club) has given it another go with a three-day event in late July.

I have to admit I was pretty impressed.

In many ways it had everything I want from a classic car show: not many people, a relaxed, garden-party atmosphere, great cars, nice food and drink and no queues. But especially no faux-enthusiast day trippers dripping in bunting.

Plus, it has to be said, that the kit was utterly spectacular.

Obviously I missed the fancy opening and the Bastille Day dinner, but when I did attend it was a lovely summer's day, understated and unobtrusive sponsorship – might as well give estate agent John D Wood a shout out as reward for its restraint – and a wealth of interesting stalls selling everything from wines to art.

But that wasn't why I was there, was it? There were 100 or so cars and, while you would assume that a smaller show means lesser cars, that was what blew me away.

They really were of the highest calibre. Centrepiece was the recently sold Aston Martin DBS from The Persuaders! (yup, the one that made had a million quid), but that was just the tip of the iceberg. There was Facel Vega, McLaren F1, all manner of Astons, Lamborghinis (the gorgeous Urraco upstaged even the Miura), a stable of Ferraris (racing and road), a Plexi-front Daytona and loads more.

And then, in a quiet, barely visited corner, I discovered a little 'tribute' to the track. This meant a De Cadenet, an RSR and all manner of delectable machinery, stuff I wanted to shout about to my friends.

And that, really, is the quandary. As a true enthusiast lucky enough to get free entry, I positively wallowed in the cars at this show, and I have to admit that in terms of crowds, atmosphere and kit it is everything that I want from an event, but the truth is that such an elite do – with approximately 3000 visitors over three days – always make me feel sorry that more genuine enthusiasts couldn't be there to see the amazing cars.

I did some sums and worked out that for the price of three days at one of the big festivals you could have spent one here. It's a very different experience, but one that many might enjoy. Thankfully, for those that missed it this year, I can at least share some of the highlights here.