How the motorway changed Britain 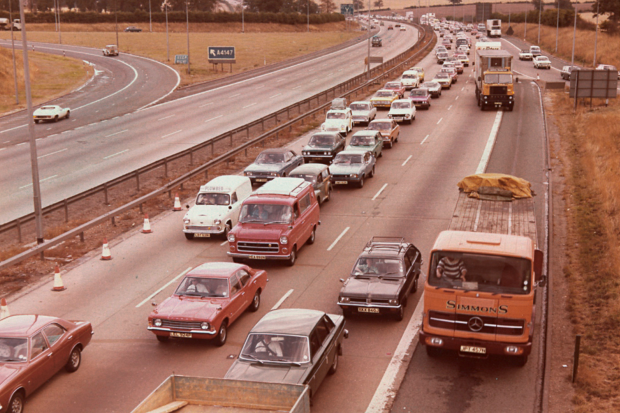 To celebrate 60 years since the M1 opened, Andrew Roberts remembers an exciting innovation for UK motorists and examines its lasting effect on the nation’s transport network

Nineteen seventy seven. The year of the Silver Jubilee, The Professionals and of Britain’s virtual industrial collapse.

The chorus went ‘Watford Gap, Watford Gap, A plate of grease and a load of crap’ and although Blue Boar Ltd successfully sued Harper for libel – on the grounds that it had never knowingly served its customers manure – the song resonated amongst the forlorn lorry drivers and commercial travellers who populated Watford Gap Services in its heyday.

The usual reason for this state of despond was dishes that, while they may have been billed as ‘sausage and chips’, were dead ringers for the original Quatermass Experiment.

Customers faced with such fine food were often to be seen slumped in despair at a Formica table that had never known better days, amid the mixed aromas of stale Woodbines and even staler cooking fat, dreaming of long-gone days when the Watford Gap was still regarded as glamorous. 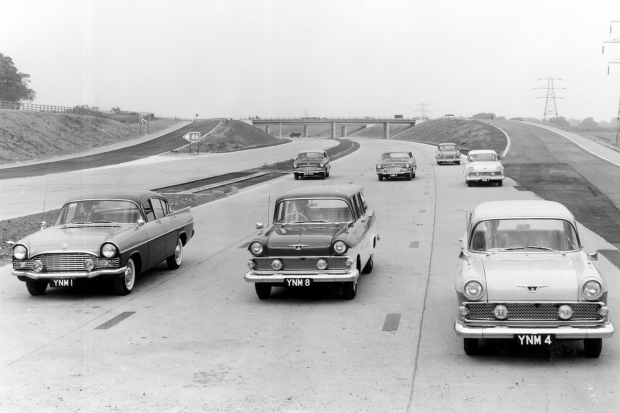 Some 18 years earlier, motorists actually made pilgrimages to the Gap, the coming of the motorways seen as heralding an exciting new age. Just look online at www.britishpathe.com to experience the sheer excitement of the early motorways.

Duple-bodied Bedford coaches promised ‘Transport for the Motorway Generation’ and ton-up boys tuned the engines of their Norton Dominators in eager anticipation of speed-limit-free motoring.

For schoolboys, there was the Corgi Ford Zephyr motorway squad car – worth 4s 3d of anyone’s pocket money. Vauxhall, with its Luton HQ being geographically well placed to use the new M1, showed off its entire 1959 range on the virgin tarmac, ignoring those cynics who said that a motorway was the ideal place to display the handling of the average Griffin product and starting a PR tradition that lasted for decades. 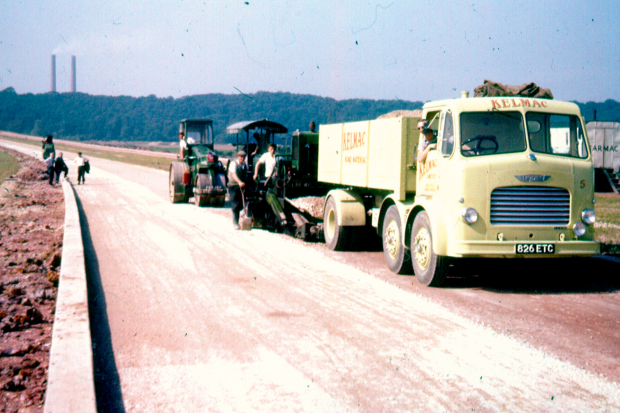 The nation’s first motorway was the Preston By-pass of December 1958. Plans for a network of British ‘motor roads’ had existed as long ago as the ’30s, but they came to nought because of economic factors and the outbreak of WW2.

As early as 1941-’42, however, the Cabinet had commissioned plans for British motorways through its Post War Reconstruction Committee that won all-party agreement.

A note of caution was struck by Lord Justice Scott concerning “some enthusiasts who are perhaps unduly influenced by continental analogies”. 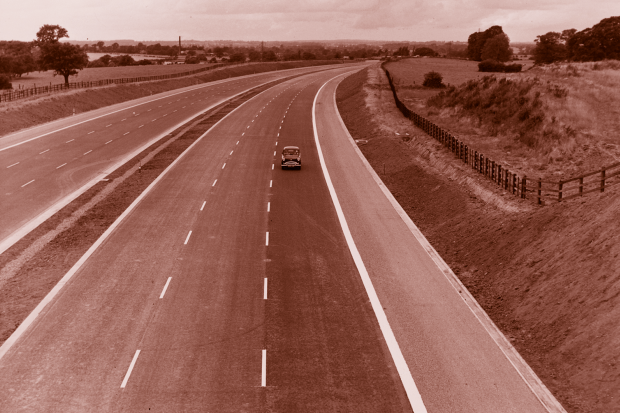 When James Drake was appointed County Surveyor and Bridgemaster of Lancashire in 1945, he was keen to revitalise the region’s road networks.

During the late ’40s, Drake proceeded with the preparation of a north-south motorway through the county, partially based on a 1946 Ministry of Transport report German Motor Roads, which argued that: ‘The layout and alignment of the German motor roads are of a sufficiently high standard to suggest a degree of safety and sense of security above that obtained on ordinary main roads in Britain.’

Three years later, an Act to create ‘Special Roads’ went through Parliament, as further indication of the government’s interest in building motorways, and in 1953 it decided to use this law to construct an experimental eight-mile motorway.

Meanwhile, the 1950s liberalisation of credit controls inevitably led to a vast increase in the number of private cars – over 250% between 1951 and 1961. But the beginning of mass motoring in the UK was a challenge that the country’s existing road network was largely unequal to.

By 1959, Britain had only 11,769 more miles of road than in 1911 and the annual death toll on the roads had reached an appalling 5000. One response to the increased volume of traffic was the 1958 introduction of the parking meter, but the motorway was understandably rather more popular with the electorate. 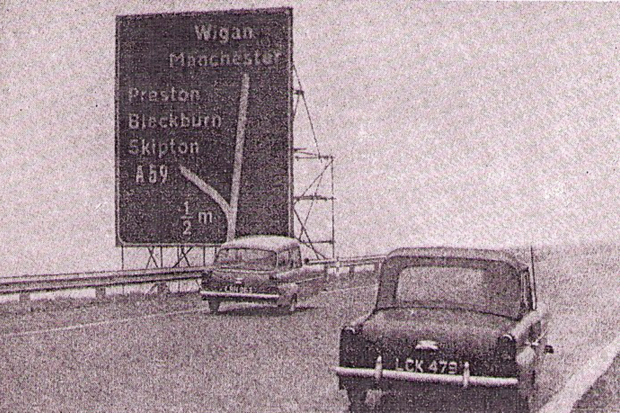 The first civilian cars to rack up motorway miles were these two three-wheeler Bond Minicars, on the Preston By-pass

Given that major ‘trunk road’ construction had virtually ceased in 1939, the building of the motorway was to be not only another form of highway construction, but also a steep learning curve.

The original design speed was 70mph (although there would be no speed limit when it was opened to traffic) and the overall width was 112ft. A charming touch was the central reservation hedge, which was planted as ‘a screen against the effect of opposing headlights’.

When the By-pass was finally opened on 5 December 1958, the ceremony was presided over by the Rt Hon Harold Macmillan, then Prime Minister, whose vision of the ‘Affluent Society’ led to communal transport being gradually replaced by individual car ownership.

After the first civilian cars (a pair of Bond Minicars) had entered the By-pass, a fleet of ministerial Humber Hawks swept – albeit sedately – across the tarmac.

The road proved such a such a success with motorists that it soon reached capacity and was forced to close within 46 days of opening, for maintenance and the establishment of a third lane. The hedge was also dispensed with as an ‘inadequate’ barrier. 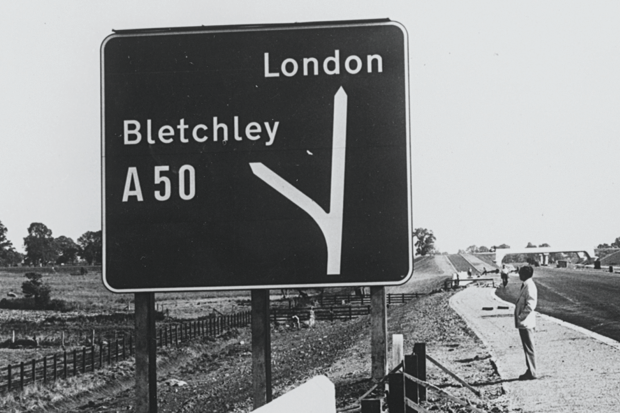 Southbound lane of the M1 nears completion in 1959

Some 5000 workers worked a 55-hour week for £17 (£19 with overtime) and the achievement of these constructors cannot be denied. A mile was completed every eight days, despite appalling weather conditions.

Two days before the official opening, none other than Stirling Moss led a parade up and down the new road cheered on, in a scene that would have seemed implausible even in a late Ealing Comedy, by teams of donkey-jacketed navvies. 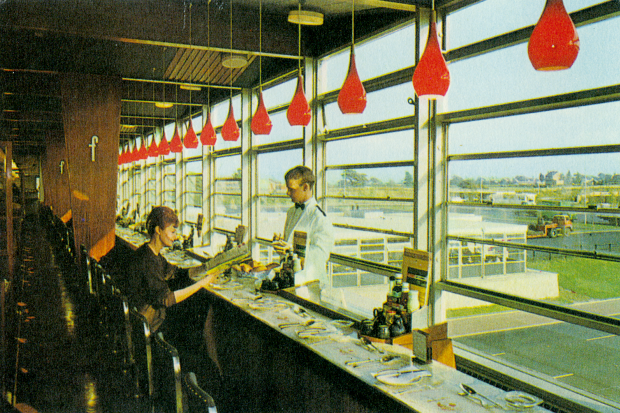 Silver service with a view at Forte Charnock

The M1 also introduced the culinary delights of service areas. The original Watford Gap was a series of prefab huts, but it was succeeded by service stations with menus that were evidently designed to tempt suave individuals with cravats and Brylcreemed Laurence Harvey quiffs.

To enter a Forte establishment on the M1 was to experience a jet-set lifestyle, with a hostess taking your trilby and raincoat before you partook of a hot-dog (2s), fillet steak (12s 6d) or other fine foods designed to make the average Standard Eight driver feel like a minor deity.

Washington-Birtley Services on the A1(M) boasted a ‘fully automated microwave kitchen service’ in a bold attempt to create the kind of café where 007 would feel at home. Why, even The Beatles had been known to dine at the Newport Pagnell ‘Grill & Griddle’. 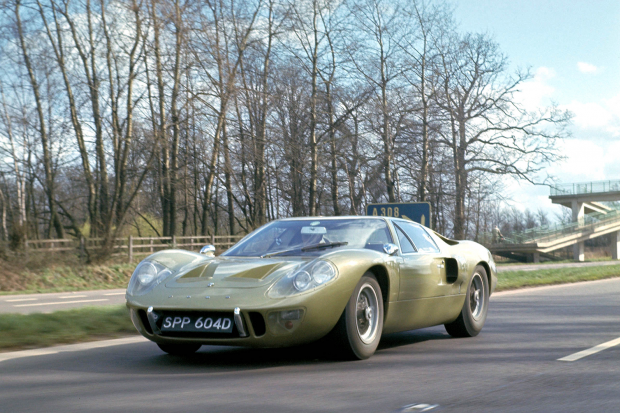 Meanwhile, the 1963 Beeching Report recommended shutting down 25% of the rail network. It was expected that most people would use roads, so the Ministry of Transport would exploit the rail budget to build more motorways.

This was to be a brave new world, with service stations replacing the branch-line stations annihilated by Dr Richard Beeching, a figure whose name is still uttered by West Country motorists whenever they are in a 10-mile tailback on the M4.

These developments allowed for such infamous stories as AC testing its Cobra at 185mph early one morning in June 1963, but the days of such shenanigans were already numbered. On 22 December 1965, the Minister for Transport introduced a ‘temporary’ 70mph limit for the motorways, following several pile-ups in foggy conditions.

The ’60s was the age when many Britons bought their first cars, and neither cars nor drivers were suited to high-speed travel. Public Information films of the early ’60s – the likes of ‘Hey you, don’t you realise that motorway driving on inadequate tyres is jolly dangerous?’ – may now look hilarious, but their raison d’être was straightforward.

Safety was the principal reason behind the motorway programme, but within a few years virtually every county had a police archive of hideous accidents, many relating to inexperience of driving with no speed limits.A further problem was that not every police car or fire engine carried the tools necessary to extract accident victims: the practice was still to summon a local garage owner with his Bedford tender. 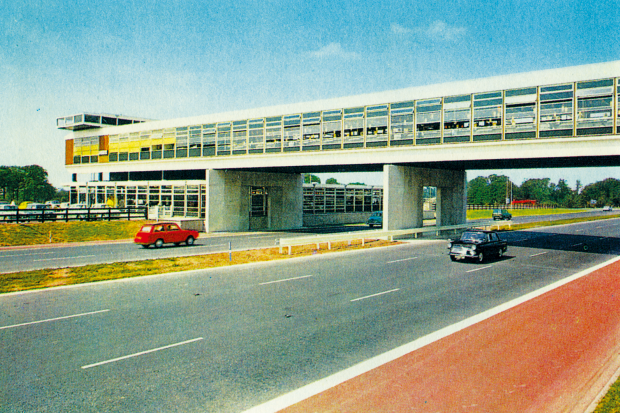 By 1969, 1000 miles of motorway had been completed and the government pledged to build another 1000 in the next decade. That was also the year that motorways changed forever, with crash barriers being used on all new routes and retro-fitted on old ones.

The 1973 Oil Crisis caused construction to halt, but even after its late-’70s resumption the government never again invested so much in roads. Motorway mania was at an end, and the service areas’ unofficial reputation as a meeting place for beat combos more or less ceased with the break-up of Herman’s Hermits.

At the height of the Macmillan-era celebration, there were those Britons who saw the motorway as the harbinger of a brutal concrete age. These fears were best summarised by protests over the vital issue of road signage.

When industrial designers Jock Kinneir and Margaret Calvert were asked to create signs for the Preston By-pass, the country still employed a plethora of signs that were picturesque but confusing to a new generation of British motorists. In contrast, the motorways would have signs that took the form of a map.

Five years later, the Worboys Committee on Road Signage commissioned Calvert and Kinneir to revamp all British road signs to follow European protocol. As a mark of a changing England, the school crossing sign was altered from an image of a boy in a school cap leading a little girl to one of a girl leading a younger boy. Calvert found the old sign “quite archaic, almost like an illustration from Enid Blyton”.

As it happens, The Famous Five were still having jolly adventures as late as 1963, but their bucolic vision of England sat uneasily with the world of motorways.

Six decades on, motorists are still evaluating their cost. The freedom of the open road, versus gridlock and a wounded rail network. Faster journeys, but through a ruined landscape.

Motorways helped to stimulate safer car designs and better-equipped emergency vehicles, but does that make up for the lack of an integrated transport policy after 60 years?

Where to, guv? Taking a ride in the original black cab

Inside the UK’s finest private collection of classic police cars