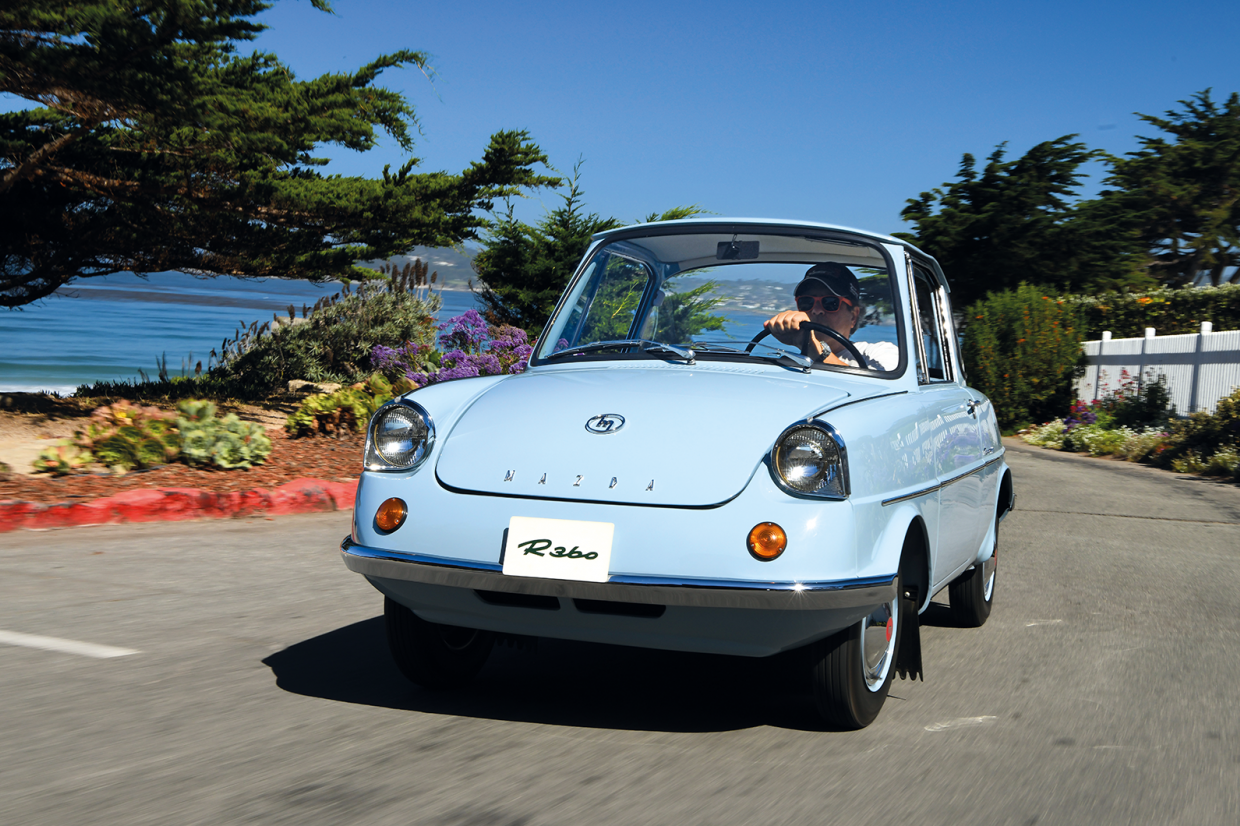 Part of the charm of early Japanese cars, particularly the kei-class miniatures, is that outside their home territory they are still a bit of a mystery.

Because they were a peculiarly domestic market-focused product, not imported into the UK in any significant numbers (if at all), so we missed out on all kinds of intriguing oddities that are now considered the crown jewels of any serious microcar collector.

Mike Malamut can certainly be considered as such: there is a rich seam of bubbles and dinky European runabouts in his private museum of 100-plus cars, but he is particularly proud of his Mazda R360. 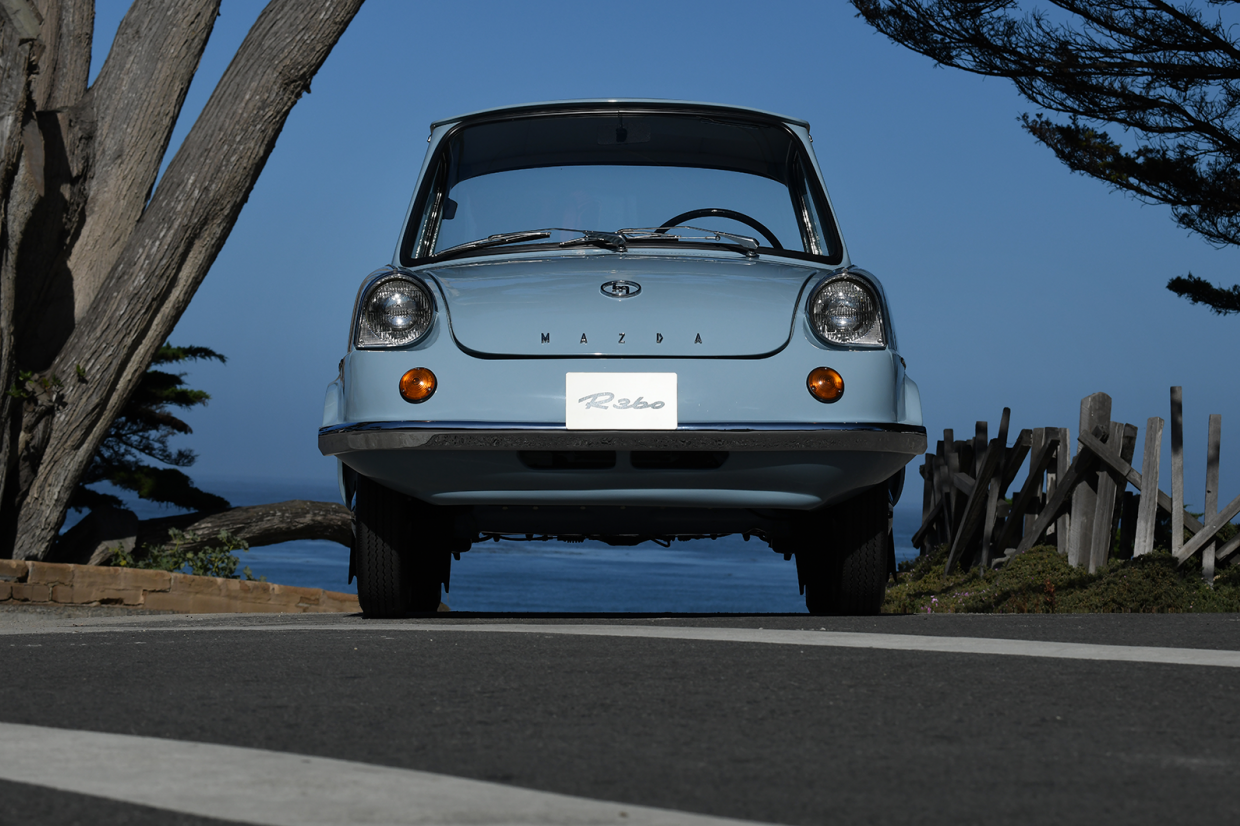 Malamut and his little blue coupé are more than holding their own among some of the most valuable exotica in the world when we first spot them at the Concours on the Avenue in Carmel-by-the-Sea, California.

This relaxed, free-to-enter display of street-parked classics is a pleasant aperitif to the sensory overload of Monterey Car Week. Here, among the Ferraris, rare muscle cars and seemingly every possible species of Porsche, all and sundry are cooing over the absurd cuteness of this baby Mazda.

The marque’s first true private passenger car, launched in May 1960, the R360 is a cartoon character of a vehicle with its bubble roof, bug eyes and mini tailfins.

Less than 10ft long and just 4ft 2in wide, this tiny 2+2 coupé is a car so adorable you would have to have a heart made of flint not to want to scoop it up and take it home like an abandoned puppy.

The R360 wasn’t built to pull on heartstrings, however, but merely to fulfil the strictly regulated criteria of the Japanese government’s keijidosha (light car) rules, brought in a decade earlier as a way of stimulating the local automotive industry in a country that was still five years away from even having its first motor show. 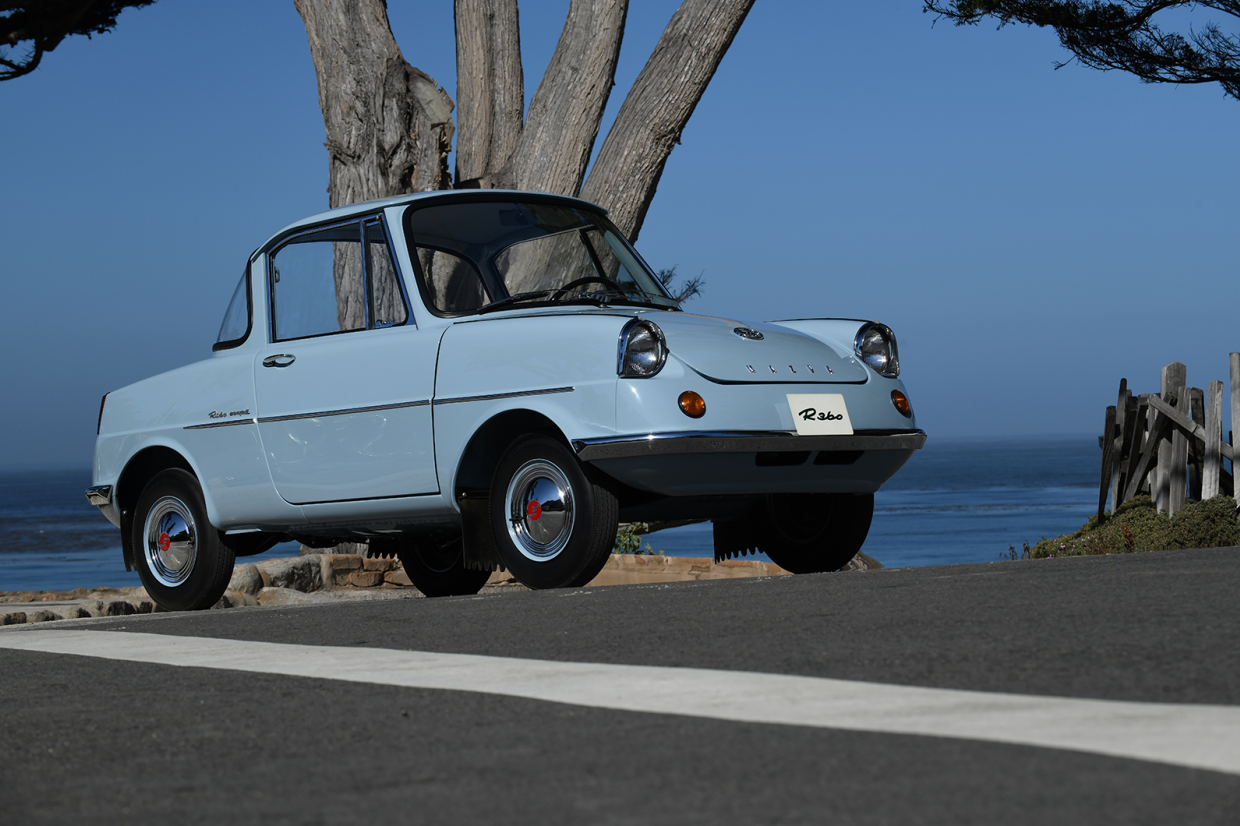 It causes quite a stir

Despite the high urban density of the domestic conditions, where roads were poorly surfaced and narrow, and the speed limits were low, to own your own car was becoming the great national dream by the end of the 1950s.

The appeal of the kei regulations was that small cars of less than a specified length would be taxed at the equivalent of £1.50 (rather than £15) per annum, and that drivers of such vehicles would be subject to a less stringent driving test.

The original 1949 ruling applied to vehicles of up to 150cc (100cc for two-strokes), but it was only when the limit was upped to 360cc, in 1955, that the kei idea had a practical application in the realm of private cars.

Suzuki announced the two-stroke Suzulight the same year, although only 43 were built of the first version. With Japan’s economic miracle well under way, Subaru followed with its 360 in 1958. This was the first mass-produced model in the class and production lasted through to 1970, the year kei car sales peaked at 750,000. 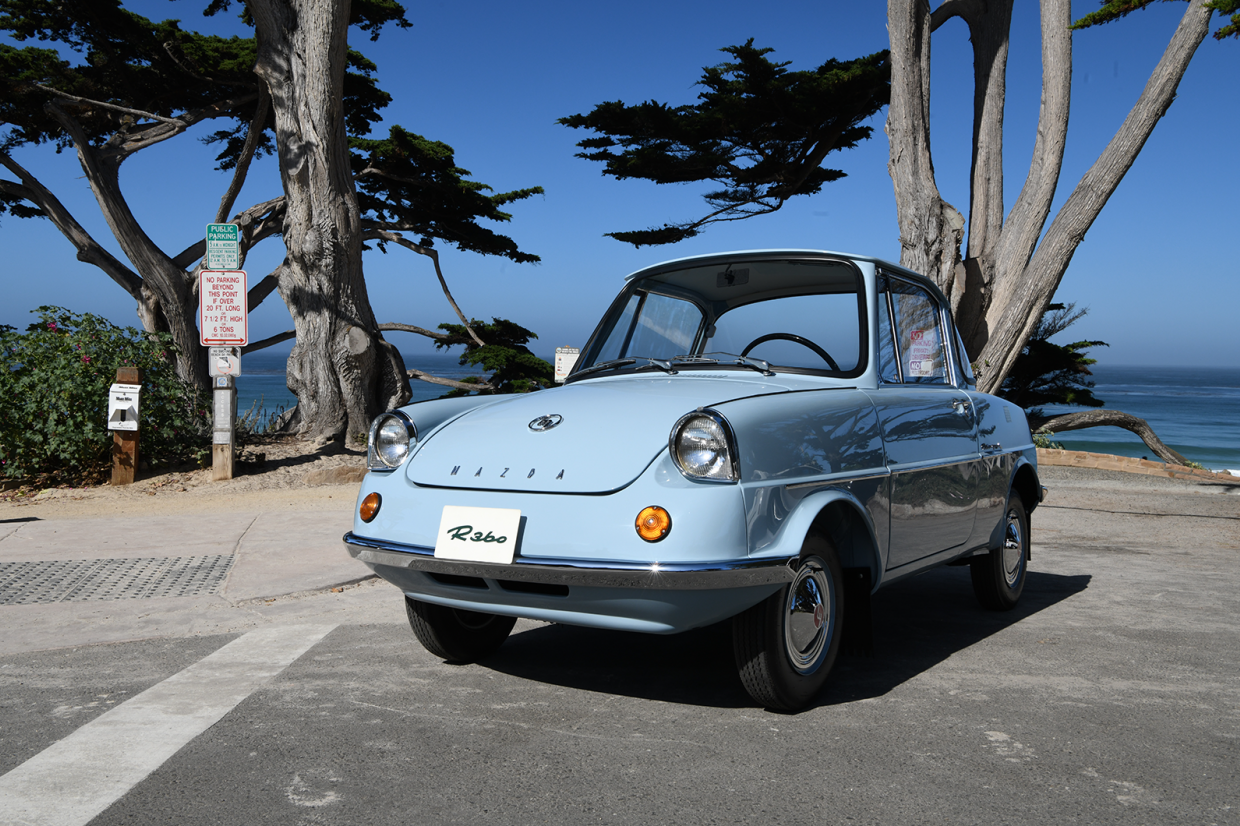 Mazda – or Toyo Kogyo – of Hiroshima was better known as a truck manufacturer, having built its first in 1930. When the firm introduced its R360 in 1960 there were still only 1.3 million private cars on the Japanese roads.

Like most of its kei rivals the R360 was rear-engined, but it was four- rather than two-stroke and thus less smelly, and thriftier, than any of its rivals.

It was a V-twin with a diecast aluminium crankcase, magnesium-alloy clutch housing, fan-cooled cylinder barrels and aluminium cylinder heads.

Good for 16bhp at 5300rpm, and easily light enough to be lifted by an adult, this engine would push the R360 along at 56mph through its four-speed manual gearbox.

There was the £20 option of a two-speed semi-automatic, Japan’s first torque-converter-equipped transmission, a nod to the fact that first-time drivers in a country not exactly steeped in car culture may struggle with a conventional gearchange. 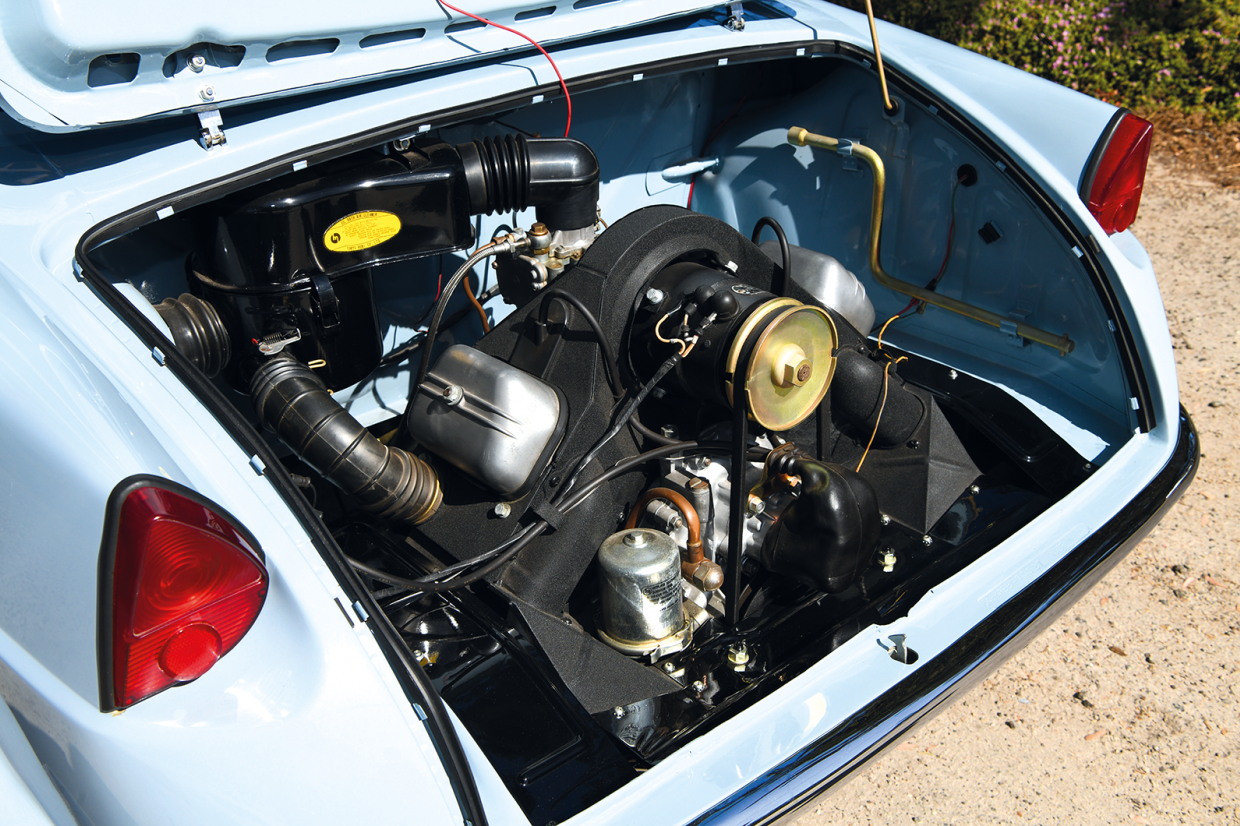 Everything had been designed with lightness in mind, from the torsion-bars-in-rubber suspension to the bodyshell, which weighed only 150lb.

With its Perspex rear window and ultra-minimalist cabin, the R360 Coupé was the lightest car built in Japan. To put things into perspective, a Renault Twizy weighs a whopping 200lb more than the Mazda.

There were 4500 pre-orders and production was soon up to 2000 a month in a mostly self-sufficient and very modern factory that had been only lightly damaged by the events of 6 August 1945.

The sliding door windows were replaced by the proper wind-down type fairly early on, and from 1962 there was a Deluxe version with a two-tone paintjob and mudflaps among other refinements.

Production lasted until 1966, by which time Japan’s inroads into the American market were well under way, although, unlike Subaru, Mazda had no interest in inflicting its kei car on buyers outside Japan.

It saw its future in bigger products such as the 800cc Familia and the new, Bertone-styled 1½-litre Luce saloon.

The attentions of the engineers at Mazda had in any case moved on to the possibilities of the Wankel rotary engine – the company was poised to launch the futuristic Cosmo coupé – although from 1962 baby-car customers could buy a more grown-up true four-seater: the water-cooled, four-cylinder P360 Carol. 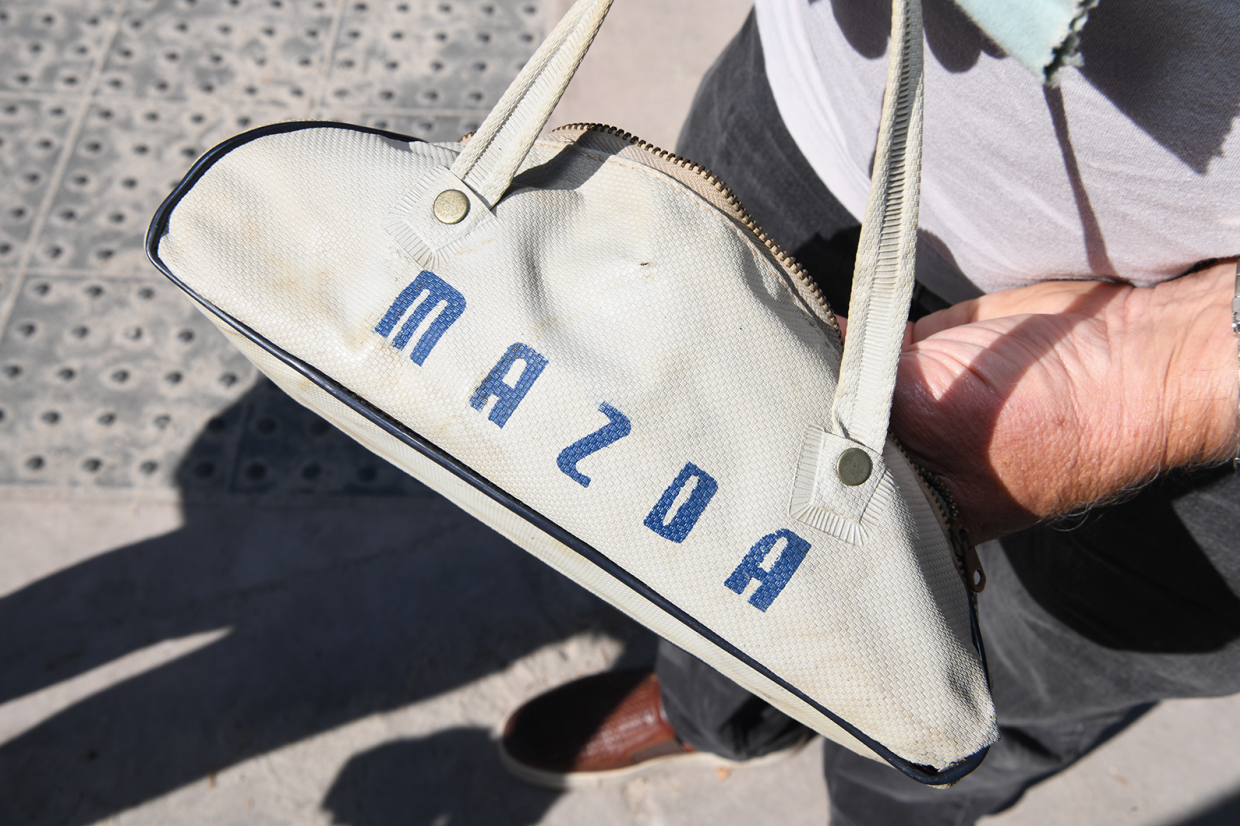 The early history of this left-handed car is not known, but it is believed to be one of the handful – perhaps 30 examples – built for American servicemen stationed in Japan.

It subsequently came back with one of them and ended up in a museum collection, still wearing a ‘US Military’ sticker.

When the museum closed, it came up for auction at Scottsdale in 1986, which is where Glenn Roberts, owner of the highly respected Finishing Touch body-shop in Fountain Hills, Arizona, bought the diminutive Mazda, almost on a whim. It had covered just 12,000 miles, but had at some point been poorly repainted.

An initial surge of enthusiasm, which resulted in the body being stripped down to a naked tub in just a day, was followed by a 12-year lull.

Then, in 2002, Roberts resolved to revisit the Mazda, having discovered a cache of new parts in Japan. 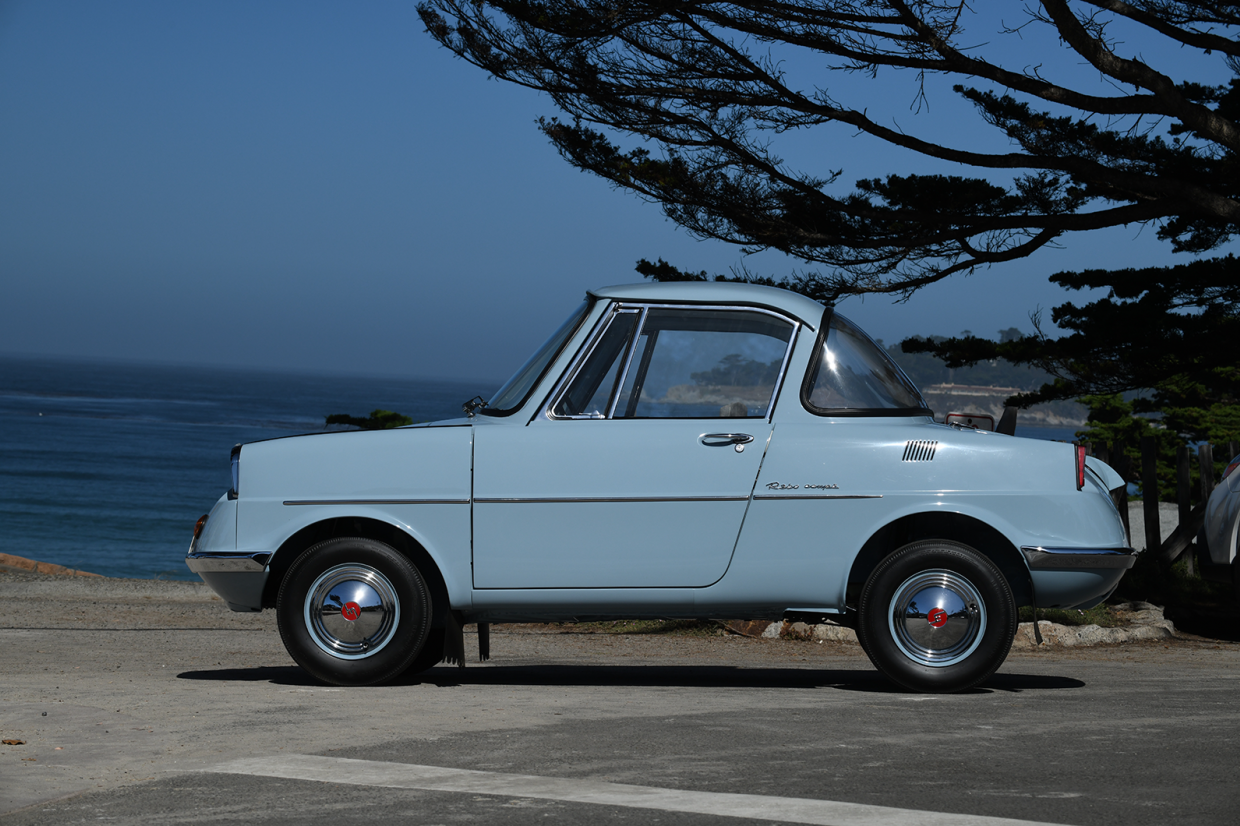 Two years later the restored R360 won its class at the annual Japanese Classic Car Show in Long Beach, California, and 15 years on it still looks like a new vehicle.

Everything is exactly as it was from the factory: seat trim, tools and even the owners’ manual (in English).

The engine, which is pleasingly presented with a central dynamo that’s almost as big as the block, has plenty of space to vibrate.

The front boot is mostly occupied by the battery and fuel tank; you lift the lid to get to the filler, but not too often because the R360 is good for 70mpg.

As for the driving, all I can tell you is that being on the outside, looking at the Mazda, is probably better than being in it, looking out – unless it’s raining or you’ve lost your shoes. 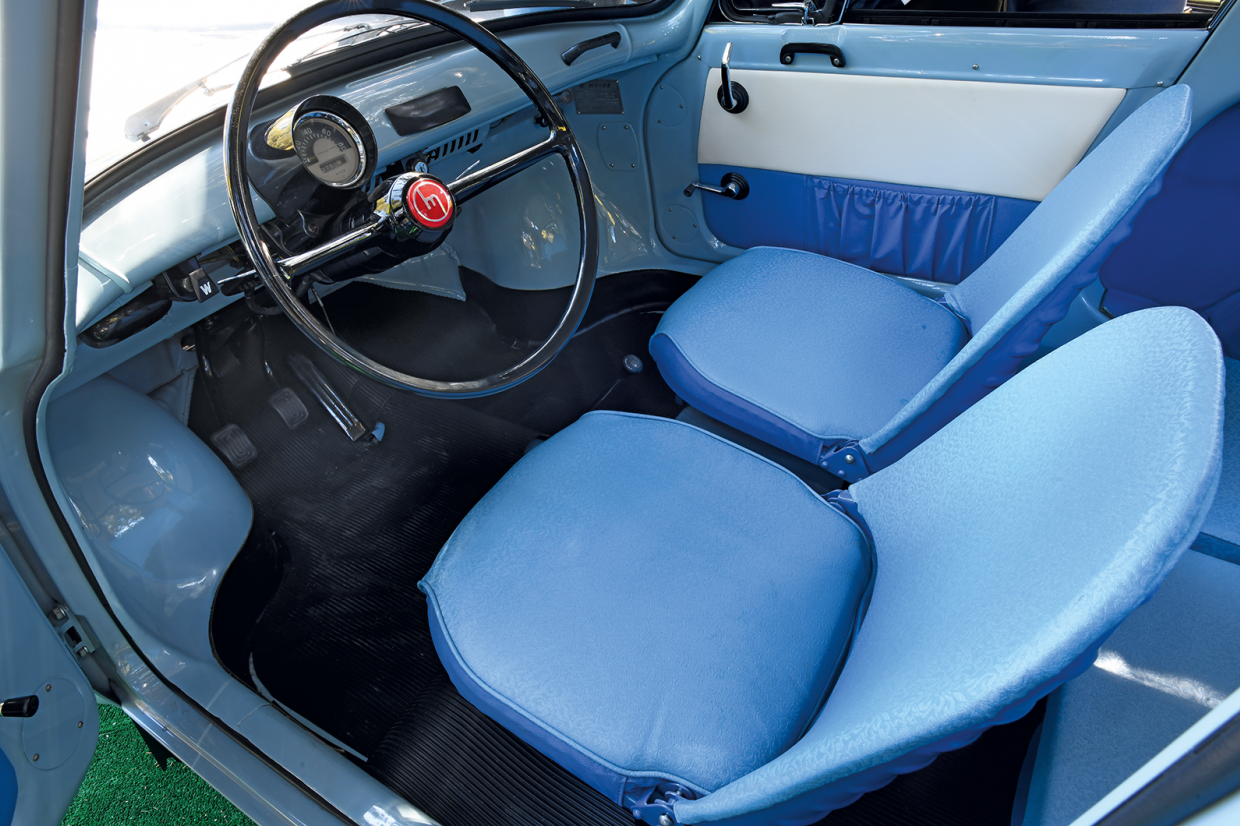 The minimalist cabin officially seats four, but it’s snug even for two

Actually, I should qualify that by saying the interior is cheerfully coloured, light and with few distractions apart from a steering wheel, column stalks, a speedometer and a tiny temperature gauge.

The seats are wafer-thin and it’s not too tight a squeeze for a pair of adults inside.

Malamut drives the R360 expertly around the tight, hilly back-lanes of Carmel, but the sounds from the rear end are more garden machinery than automobile and the gears need to be used liberally; first is ‘crash’.

It occurs to me that I probably know people who weigh more than this car, and you have to wonder what it would be like three-up with a load in the boot.

It rides well on its torsion bars, though, to cope with the poor local roads of the time, and the rack-and-pinion steering is light and accurate. The weight and power of the thing hardly tax its drum brakes. 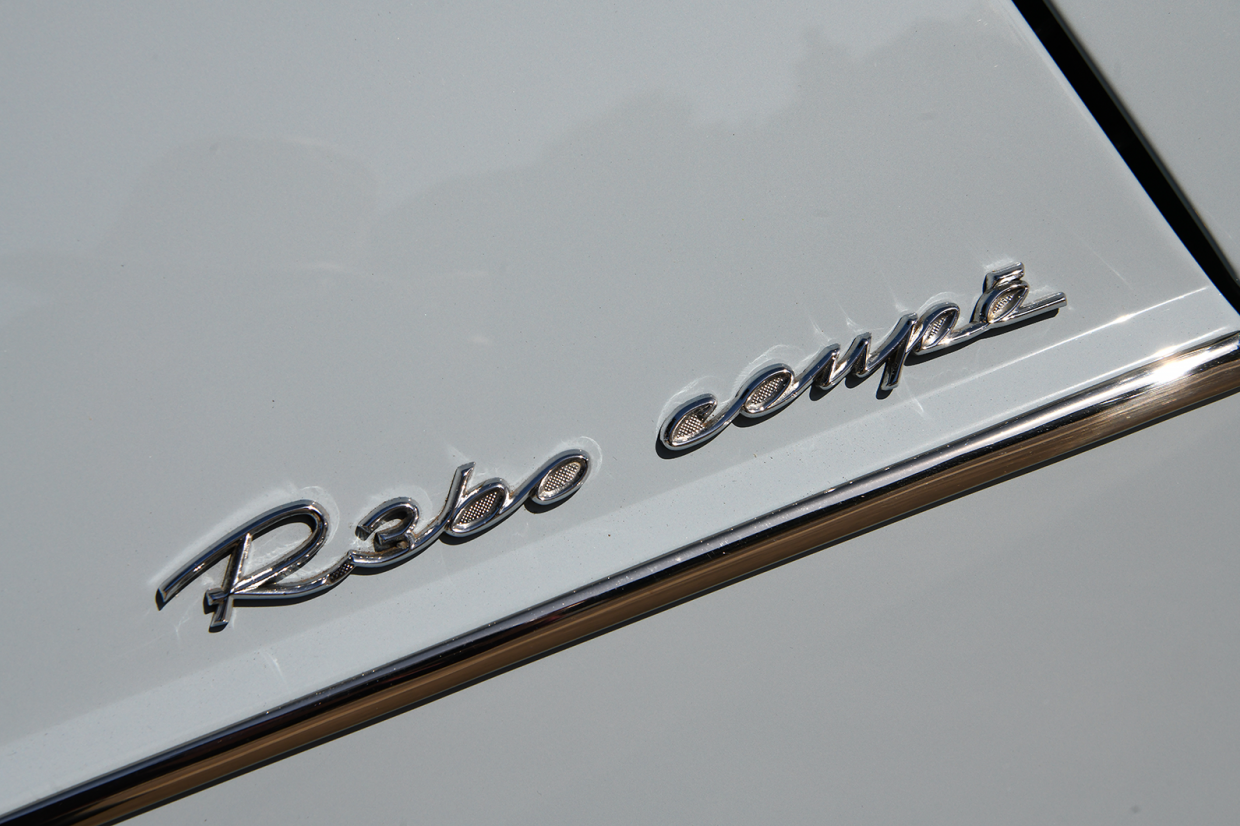 You don’t see one of these very often

The point is, this is an object that just makes you smile; I can’t help but think of Inspector Clouseau’s police car from The Pink Panther cartoons.

The colour, and the size, also give the R360 a strong hint of the British Ministry of Health cars of unhappy memory – but because the Americans never had an NHS that handed out free motor cars to people, that comparison may get lost in translation so I keep it to myself.

And why dampen the mood? Being with this Mazda is like hanging out with a minor celebrity.

Children want to be photographed next to it and, as an attractor of attention, nothing comes close. Forget E-types and 911s: the R360 is a magnet for every Californian jogger that comes into its sight line. 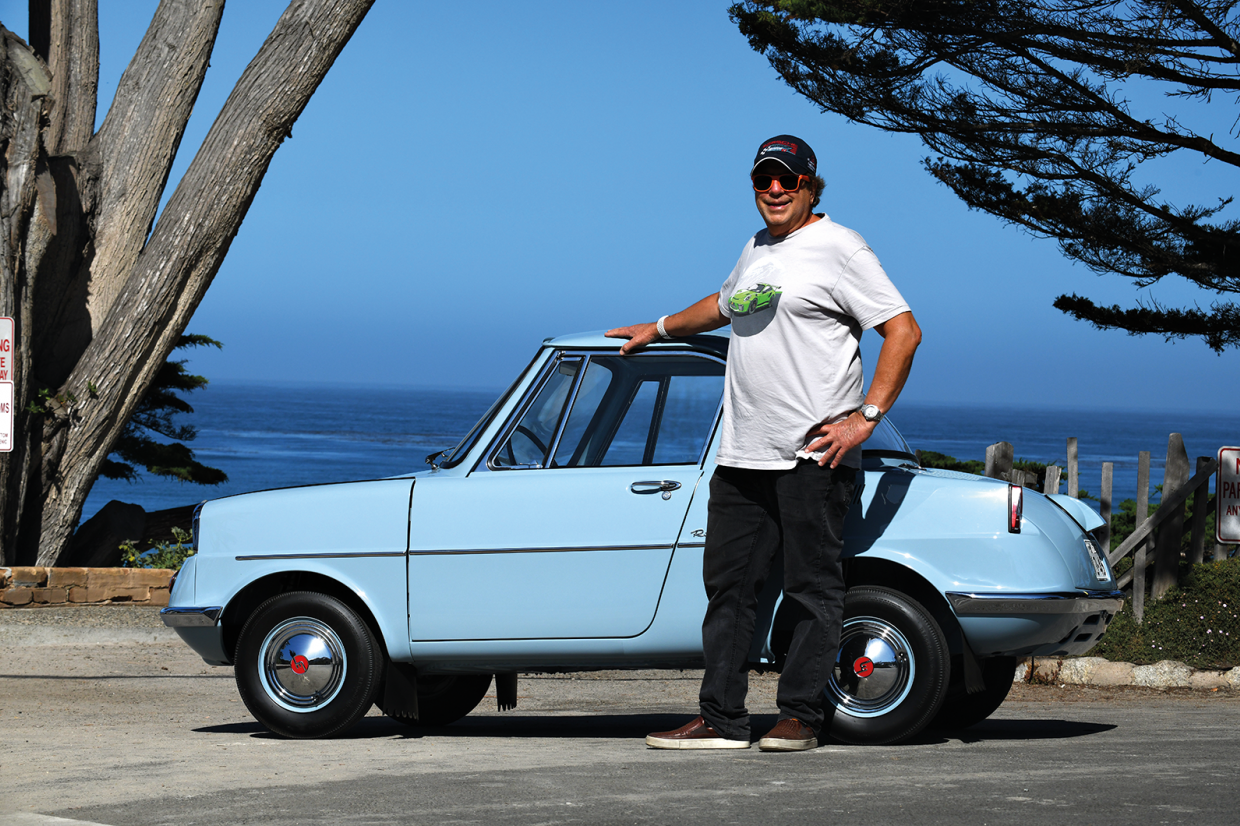 “People go crazy about it – I just tell them it’s a new model,” jokes Malamut, who began his love affair with cars as a youngster repairing VW Beetles in the 1960s, before gravitating to Porsche 356s while, at the same time, getting in early on the growth in computer diagnostics machinery and finally making his fortune with a multi-franchise car-leasing business.

He sold out in 2001 to go full-time playing with old cars. Thus, rather than being the traditional gilded Californian collector, he came up the hard way and really knows his cars, with a fondness for the sort of vehicles he was involved with as a young man.

Yes, he has a Mercedes-Benz 300SL ‘Gullwing’ and a Toyota 2000GT, but he is equally passionate about his BMC Minis, his four-wheeler Berkeley or his ’60s Saabs and Volvos.

His Japanese selection includes a Datsun Fairlady and an early B222 pick-up, plus Honda Z600 and S800, and an early Land Cruiser.

But the R360 had eluded him until fairly recently. 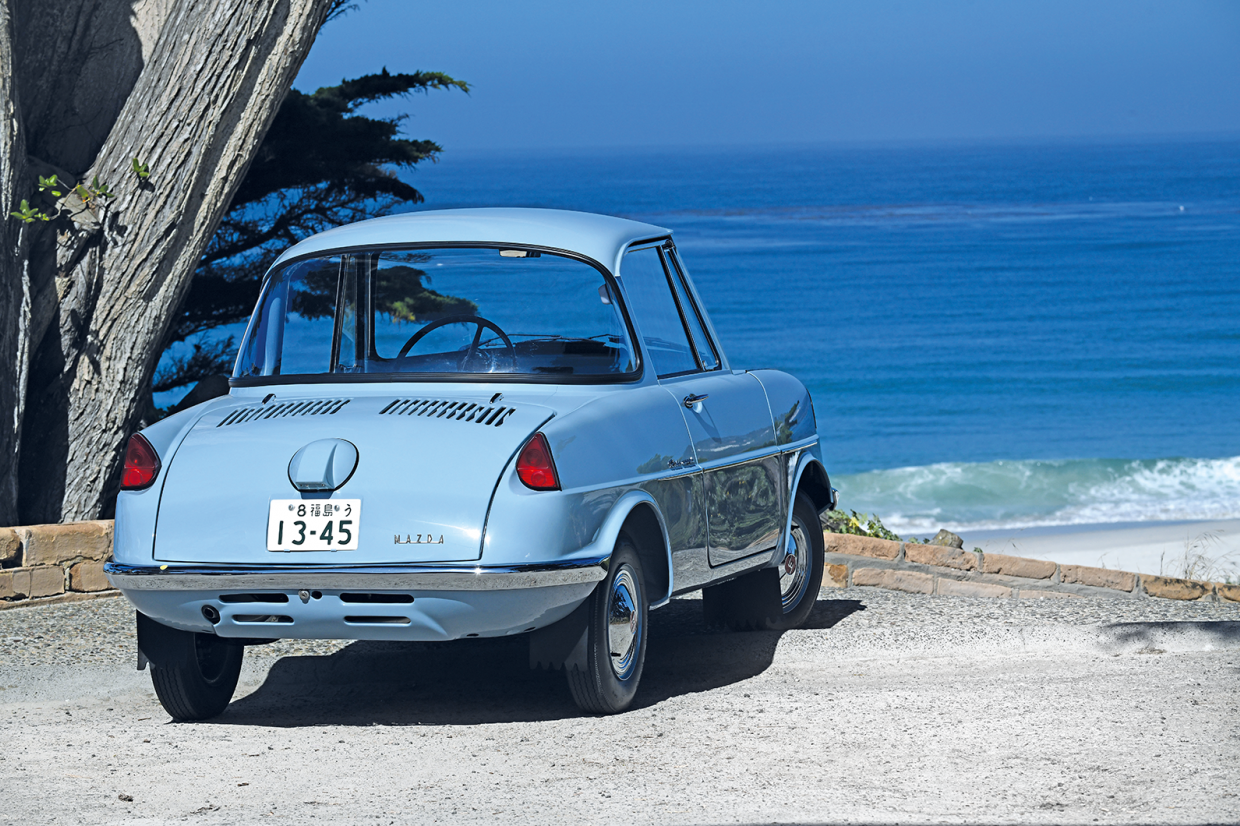 Its head and tail-lights blend into fins and swage line

He courted the previous owner for years, trying to persuade him to part with the little car: “I would see it at car shows and I’d say, ‘Glenn, that deserves to be in my museum.’

“After five years he called and said, ‘I’m sending one of my kids to college, I’m ready to sell it.’” He also bought a Mazda Cosmo from Roberts.

Malamut thinks there are probably only five R360s in North America, and his left-hand-drive car may be unique.

It would have cost that original 1964 owner the equivalent of around £300; it would be a lot more today.

Malamut won’t be drawn on figures: “I could have bought a nice Porsche for what this cost me.” So we can assume that, at a featherweight 838lb, the Mazda R360 is, per pound, one of the most expensive classic cars out there. 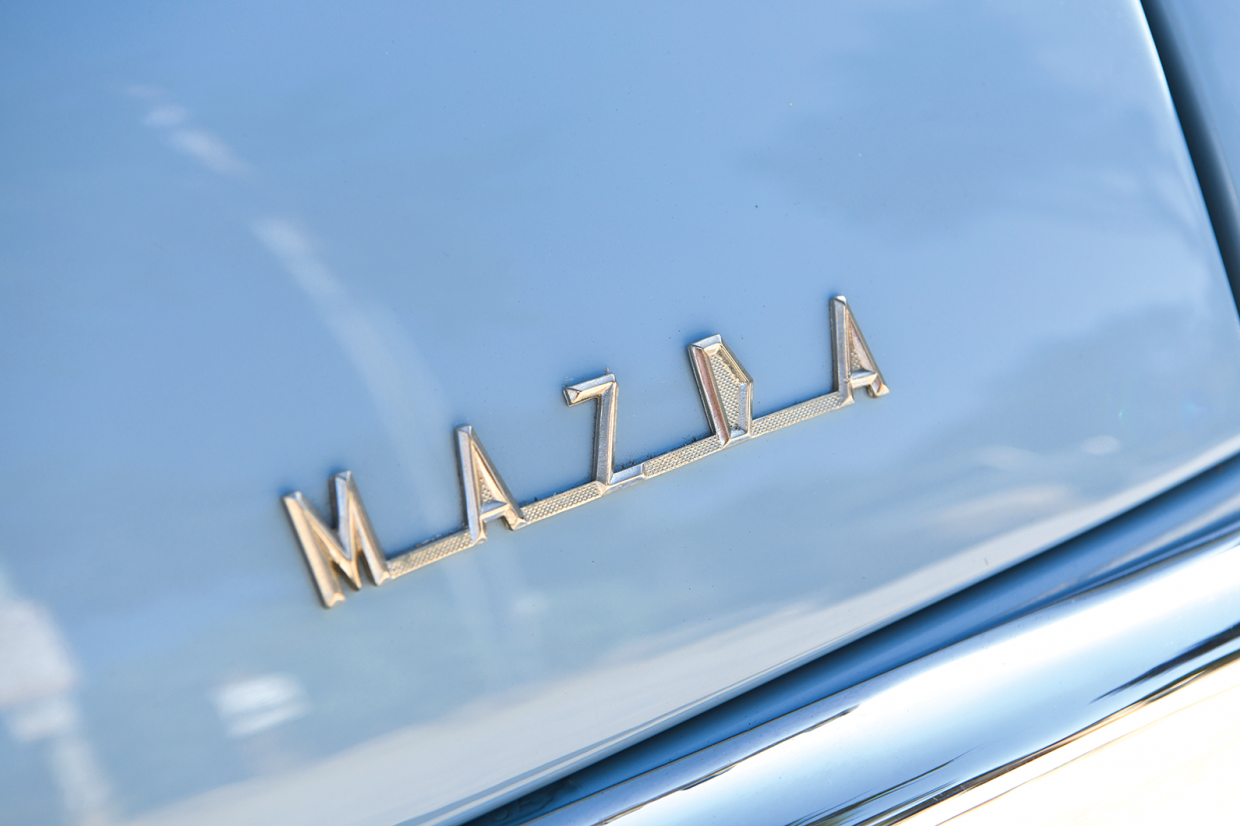 Classic & Sports Car and COVID-19: a word from the Editor 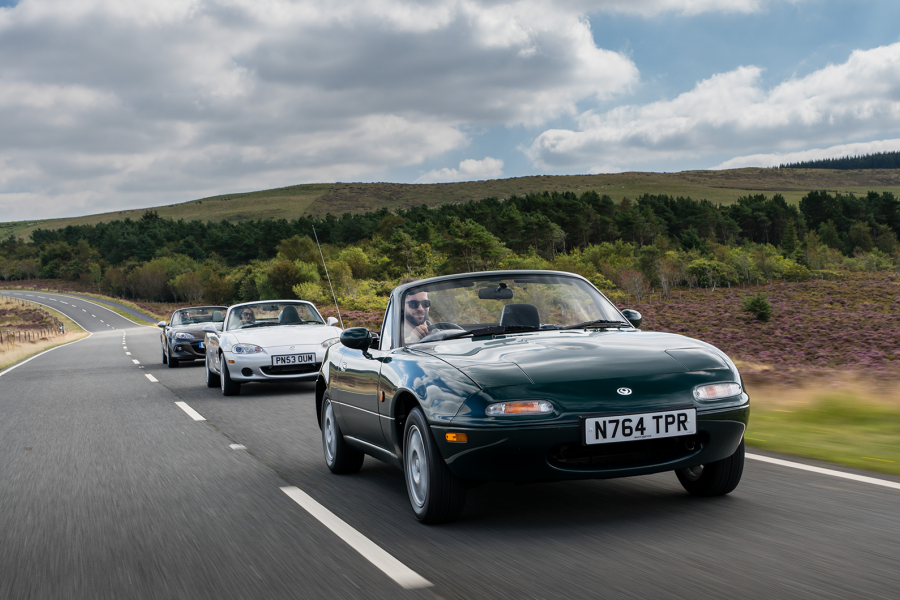 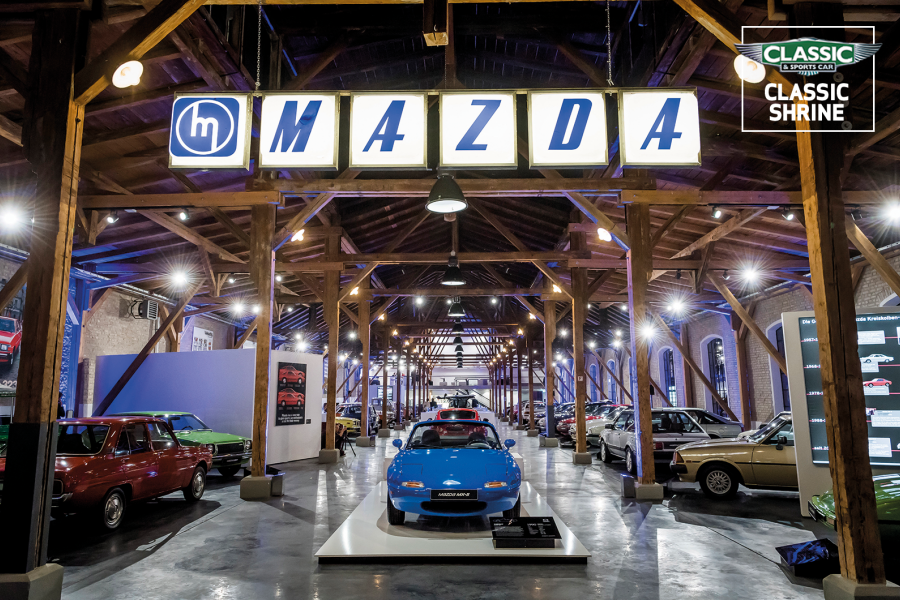 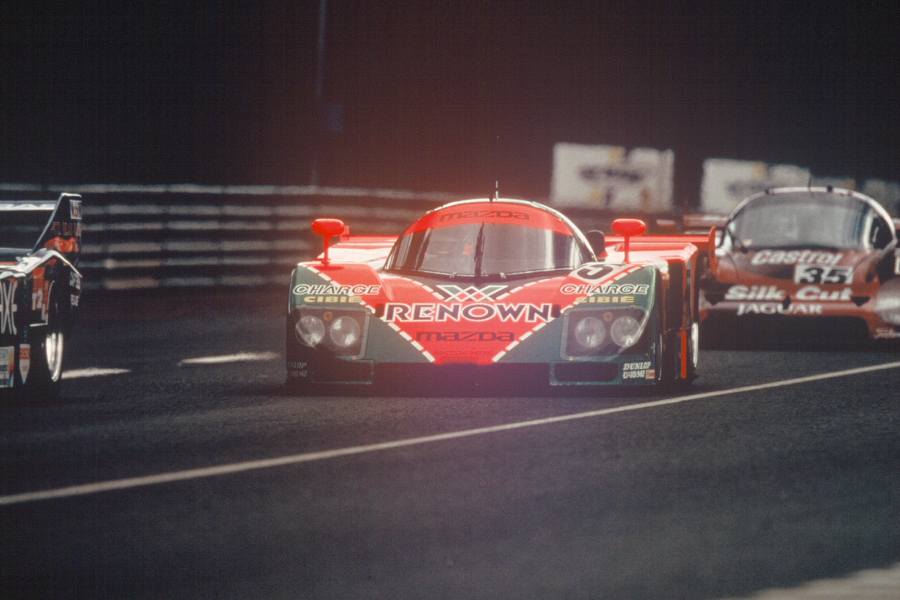 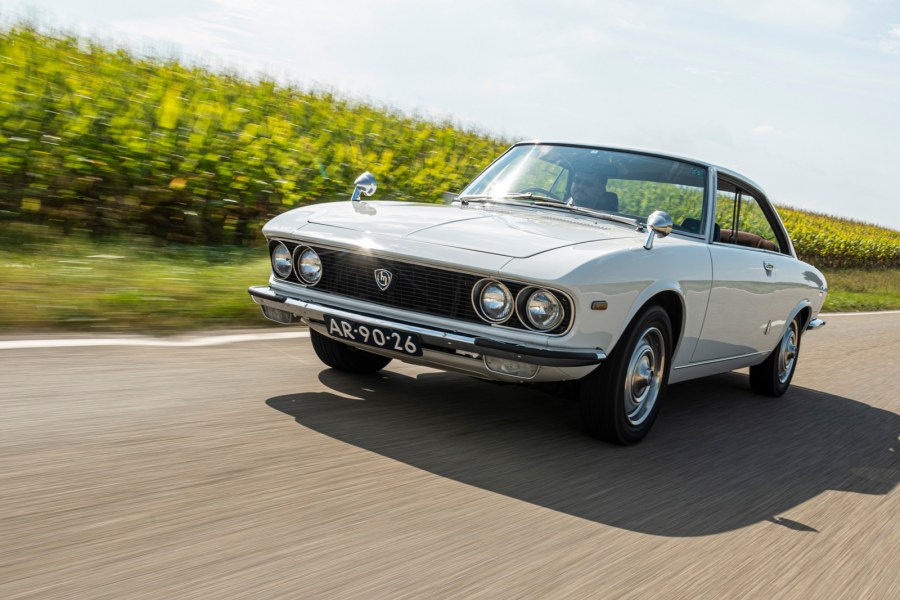