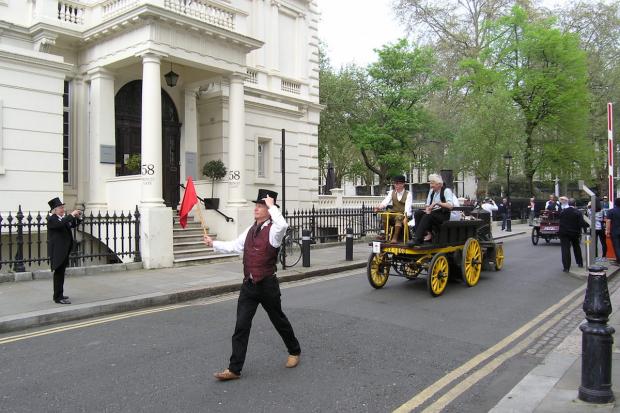 An outstanding group of early automobiles gathered at Imperial College on 7-8 May to celebrate the 120th anniversary of London’s first motor show. The International Horseless Carriage Exhibition, organised by The Motor Car Club Syndicate, opened on 9 May 1896 at the Imperial Institute, which later became the Commonwealth Institute and moved to Holland Park. The commemoration, masterminded by Nicholas Pellett of the De Dion Bouton Club, formed part of the Imperial Festival.

“It was the very first motoring event in London, which led to the Light Locomotives Act being passed,” said a delighted Pellett. “We have vehicles here that were in the original show and took part in the Emancipation Run.”

The revival comprised 23 conveyances, spanning an 1895/’96 Benz Patent-Motorwagen belonging to Bernard Holmes – one of only two replicas on show – to Mike Mutters’ 1903 Stanley steamer. The Royal Automobile Club brought its single-cylinder Simms, which was built by RAC founder Frederick Simms sometime before 1900 and is powered by a 1902 Simms engine.

About half of them went on a demonstration run – led by a red-flag man, of course – around South Kensington each day, the oldest being John Brydon’s glorious 1896 Salvesen steamer (here taking on water). It was named after the Norwegian who commissioned for use around his Scottish estate near Grangemouth, with the body built by a local cart maker. “Water surrounds the fire,” Brydon explained, “so you get good steam pressure.” The safety valve was giving off regular bursts, in fact, much to the delight of visitors and passing tourists.

Harrods’ immaculate 1901 Waverley also drew lots of attention. It was brought by Len Brown, curator of the famous Knightsbridge firm’s historic vehicles. “It’s the oldest one known to survive,” he said, “and is a regular on the Brighton Run. We have some excellent new batteries in it now; last year we only had to change them three times compared to eight times in 2014. We keep this and one of the old vans at the shop and they’re both often still used for local deliveries – to the Albert Hall or any of the palaces.”

Andrew, Nicola and Henry Howe-Davies wore authentic clothing on the 1902 De Dion-Bouton they’ve owned for 10 years. “I do my own hats,” enthused Nicola. “It’s great fun going round vintage fashion fairs. This is a original hat with original feathers that I found for it at a sale. We do the Brighton Run every year – water pump willing.” As Andrew pointed out: “You never know what to expect with a veteran car. It ran beautifully on the run and now it’s throwing water out everywhere!”

Imperial’s two classics were both on show at the festival, including the 1902 James & Browne ‘Boanerges’. It’s run by City & Guilds Motor Club, although anyone at the college is welcome to join. “We’ve got a few physicists,” said Alec Moore, “but it’s mostly mechanical engineering – the nature of the course.” He and Matthew Homburg were trying a solution to a problem suggested by a mate: “It’s a week to exams…”

Peter Bartley’s 1903 Achilles has competition history, having won the last Old Crocks Race at Brooklands in 1939. Alongside was John Worth’s magnificent, much-travelled 1900 Daimler.

Minister of State for Transport Robert Goodwill had driven his 1900 De Dion-Bouton vis-à-vis over from the Commons for Friday’s preview: “Back then you got better cars from France due to the Red Flag Act here in the UK. They didn’t have the act there so they produced a lot more vehicles for the consumer market.” His son Bob, a mech eng student who graduated from Imperial four years ago, was at the wheel on the Saturday (behind the Achilles). Bob’s interest in vintage cars was sparked after becoming a member of CGMC and driving Bo while at college.

Pellett even had the original International Horseless Carriage Exhibition progamme specially reproduced for the revival. In fact, he has a few unsold copies left over: find out more, and about the De Dion Bouton Club, here