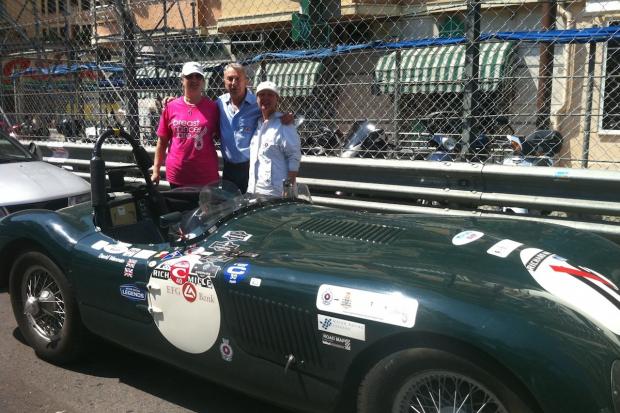 The intrepid team that drove a Jaguar C-type 1000 miles from the UK down to the Grand Prix Historique de Monaco have raised nearly £10,000 for charity.

Having left the RAC Club in Epsom on 6 May, Sarah Adams-Diffey and Liz Wenman – who dubbed themselves the "two mad birds" – drove for five days through all weathers in their fundraising drive for Breast Cancer Care and the Prostate Cancer Charity.

On arrival in the glamorous principality they were welcomed by the Automobile Club de Monaco's Michel Ferry (main picture).

Then the ladies handed the Jaguar over to David Wenman who drove the C-type to an impressive fifth place at the meeting.

If you haven't pledged already, you can still sponsor them – and help them smash through the £10k mark – here.

Liz: "Sarah, are you going to Monaco Historic this year?”

Sarah: “You bet! Wouldn’t miss it for the world. Are you going?”

Pause for another slurp of wine....

Sarah: “You know what Liz, we ought drive down to Monaco in a race car just as Tim Dutton and Duncan Pittaway do in the Bugattis. I mean it’s how it used to be done. The cars were often built and then driven to the track.”

Liz: “What a great idea. We could take the C-type! David, you would be ok with that wouldn’t you if Sarah and I drove the car down?”

David: “Yes, great idea, why not?” Now at this point ladies and gentlemen, I had no idea that it was indeed the Jaguar C-type that had the entry to race, nor did Liz or I know that at this point David was thinking quietly to himself: "They will never, ever do it!”

And so our plan was hatched, and initially that was all it was, two mad birds with nothing but the thought of tootling along through the French countryside, being admired by the locals, staying in fine chateaux, drinking delectable drinks and eating mouth watering food... until the guilt set in!

Sarah: “We can’t do this for no reason! I know we aren’t climbing up Mount Kilimanjaro or running a marathon but frankly, the responsibility is so great to get the car there on time that I honestly believe we should think about doing this for a reason, for a cause.”

With great sadness, we both knew which cause it would be. With very close friends and family who have recently succumbed to breast cancer and prostate cancer, there was absolutely no doubt which charities we wanted to assist, although Liz and I both agreed that whilst it would be great to raise some money, it was creating awareness that was more important, as both breast and prostate cancer, can often be cured if detected early enough.

And so it was that within two weeks, the plan grew into a full scale charity fundraiser, which is how the strap line, “Get yourself an MoT” was born.

It is undoubtedly at times like these that you know who your friends are, and boy, we found friends we never knew we had! In a trice, the word was out, and we were on car web sites, like Classic & Sports car, Vintage racer, and Pre-war car amongst many others.

The Virgin Giving Money, Team MOT web site was built, The title became Monaco & Bust (for obvious reasons) and Liz and I set the bar at £5,000.

The reality that silk headscarves were probably not very practical started to dawn upon us and were duly exchanged for thinsulate headwear instead. North face Glacier fleeces and technical fabric waterproof and windproof coats, all embroidered to within an inch of their lives, promoting the cause were purchased, and the ‘Damarts’ came out of the ski chest of clothes along with a variety of gloves and goggles.

Interviews and photographers were arranged and the departure address and final destination address and time decided upon.

We were to start at Woodcote park on Sunday the 6th May and were to complete out mission on day five with a congratulatory handshake from the wonderful Michel Ferry, Commissioner General of the Automobile Club de Monaco. Preferred arrival venue; in front of the ACM, at midday on 10 May, just in time for scruitineering. The pulse is now racing.

On a wet Sunday morning, with Club members and husbands waving us off from Woodcote, we set off in the marvellous English rain down the M25 to Dover. It’s funny, but when Liz and I dreamt this up, I was sure we hadn’t incorporated inclement weather into the plan!

The four days passed rapidly, with alternate days at the wheel for each of us. We drove through four seasons of weather, mainly rain, and five inches of the wet stuff sloshing around the foot wells as if we were in a small dingy that was about to sink. The car behaved beautifully, although having no fuel gage, which I am sure was a test, did mean that we were consistently aware of how many miles were being driven.

We met the most marvellous people along the way, including others also on the trek down to Monaco.

One individual arrived at the Chateau Etoges where we were staying in the Champagne region in a Derby Bentley. Handshakes and general good humoured camaraderie all round at how brilliant it all was, when I asked one of the chaps to repeat his name as I had not caught it upon first introduction.

“Courage,” he said. “My name is Edward Courage”. And so it was that we asked the cousin of Piers, to help us check the oil for us the following morning with his brother–in-law.

As I have mentioned previously, we went from rain, through sleet, wind and anything else the gods could through at us, and arrived on the coast, day four, at lunchtime, near St Tropez to an extraordinary heatwave. Lunch on the beach was definitely deserved, but the sunburn, unfortunately not!

On day five, as planned, we arrived in Monaco, puce in the face, mainly from the sunburn, but also from fury at the appalling queues that we had had to endure on the motorway.

For those not in the know, you absolutely cannot run a race car too hot, and as we watched the gauge mount from a happy 65 degrees to 85, we used every trick in the book. Turned off the engine and coasted down any hills we came upon, fan on, lights off, and just as we thought we would have to pull over onto the nondescript hard shoulder, an angel came to our aid, and the queue started to gain momentum as we picked up speed and more importantly the cooling wind into the car.

Michel Ferry met us as promised, in his famously enthusiastic style with kisses all round telling us how brilliant the whole thing was when the car promptly stopped.

We had used up all the battery, probably because of the fan. As if we were on some sort of winning streak and to my utter relief, Aubrey Finburgh and his daughter Vannessa Marcais were also there to greet us and, as Aubrey organised a battery pack, we jumped the car back into life and Liz and I drove into the Paddock, much to the relief of David, who was now assured of his drive for the weekend.