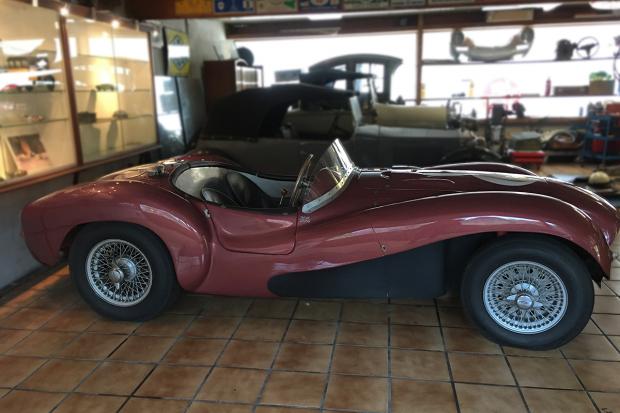 In the early 1950s it was a common practice for amateur race drivers to create their own specials to compete against professionally engineered factory racers. Of all the specials that were created during this period, one of the most interesting examples was Tommy Sopwith’s “Sphinx”.

Tommy Sopwith was the 21 year old son of Sir Thomas Sopwith, chairman of Hawker Siddeley, and was also employed at Armstrong Siddeley in the development department. The Sphinx is a 1954 Allard J2R chassis 3405 – one of only seven ever built – ordered by Sopwith and fitted with a 3.4-litre Armstrong Siddeley Sapphire engine. He then had an unbelievable custom aluminum body fitted, giving the impression of a cross between an Aston Martin DBR1 and a Jaguar C-type.

The Armstong Siddeley engine may have seemed an odd choice, but more power was obtained by the fitting of a high-lift camshaft, three double-choke Weber carburetors and a free-flowing, six-branch exhaust system. The crankshaft was specially designed to withstand the increased power output (227bhp @ 5100rpm), the car being run on 100-RON petrol which could withstand the 9.5:1 compression ratio. The high power output and well-balanced J2R Chassis brought it success in four races in 1954 against cars such as Jaguar C-types, XK120s, Allards and Aston Martin DB3Ss, among many others.

The Sphinx made its debut at Goodwood on March 27th 1954 winning second place to a Jaguar XK120 C in one race. The team backing Sopwith’s Sphinx was called ‘Equipe Endeavour’, named after his father’s racing yachts, which competed in the America Cup Race in the 1930s. Although he was not an official sponsor of Tommy and the Sphinx because a race team was hardly Armstrong Siddeleys style, staff from the Armstrong Siddeley factory devoted their spare time to working on the car. Sopwith's head mechanic that helped him design and work on the Sphinx was John Crosthwaite. Interestingly, Crosthwaite went on to work with John Cooper of Cooper Cars after his season with the Sphinx, supervising production and final design of Equipe Endeavour's sports cars on Sopwith’s behalf.

After its BARC Goodwood debut, the Sphinx ran in many other races in 1954 including: National Castle Combe, British Empire Trophy, National Silverstone, Ibsley, National Davidstow, National Snetterton, Snetterton International and Goodwood International,. It took part in a total of 17 races in the 1954 season, placing first in four races, once at Silverstone, once at Snetterton, and twice at Davidstow. After the 1954 season, Sopwith decided to move on to other cars and retired the Sphinx.

In the late 1950s Sopwith sold the engineless Sphinx to racing driver Brian Croot, while Equipe Endevour, went on to race other cars such as a Ferrari GTO #3589GT in 1962. Croot immediately fitted the Sphinx with a race prepared 3.8-litre Jaguar twin-cam six-cylinder engine with high-lift camshafts and Weber carburetors, successfully racing the car along with his C-type Jaguar at venues such as Silverstone, Goodwood, Brands Hatch, Oulton Park, Prescott, Shelsley Walsh, until the late 1960s when he and the cars retired and the Sphinx once again disappeared from the public eye.

The Sphinx eventually resurfaced on a French estate, where for many years it was rumoured to have gone. It is now on offer publicly for the first time since its disappearance. It wears an old restoration performed by the previous owner retaining a great patina befitting a seasoned race car. With its heavily documented race history and outstanding story, the Sphinx is once again ready to be appreciated in a sports car collection and enjoyed by the public. The “Sopwith Sphinx” has returned.

It will be offered among many other very significant motorcars at the Dragone Greenwich Weekend Auction on Saturday 4 June in Westport, Connecticut, USA at 6:30pm. Go to www.dragoneauctions.com for the full digital catalog.