Even commercials look chic when on show in the French capital 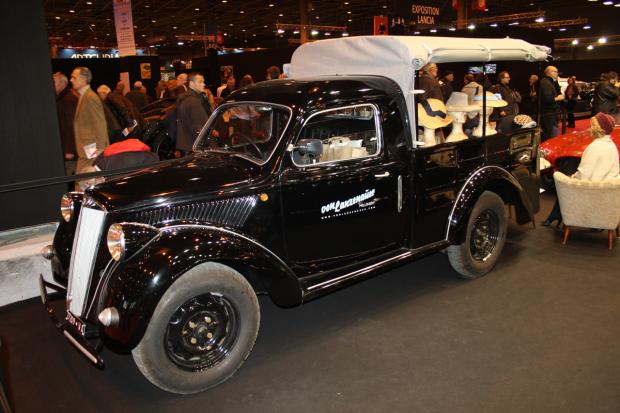 But the real joy of this ever-growing – and ever-improving – show in the French capital is what we like to refer to as the 'weirdies', the stuff that you will never find at any other European event, but which always makes me feel grateful that there's someone out there caring for it.

This year's unofficial theme was commercial vehicles, with an amazing number of hard-working vans, trucks and buses – quite aside from the wacky little Voisin camionette mentioned in our main show report.

Specialist Tradex SRL brought along the truly wonderful Fiat 642 RN2 Ferrari transporter – which was almost upstaging the P4 racer on the back – but I've seen that before, so found myself drawn to a rather smaller load-hauler on the same stand: a gorgeous little first-series Lancia Appia pick-up that belongs to German milliner von Lanzenauer (top). Presented complete with a display of period hats, it looked as if it had been teleported in from the Goodwood Revival Car Show.

But stealing the show for sheer commercial chic was the Alfa Clasic Club de France's glass-backed Alfa Romeo 'Romeo 2'. One of 21,722 Romeo 1, 2 and 3 vans built from 1954-'63 before the model was replaced by the updated F12 – and one of only two in the country – it featured the all-alloy twin-cam Giulietta motor or, even more intriguingly, an optional Perkins diesel with Roots supercharger.

Fans of Renault buses were particularly well served this year. One private vendor brought along a charming 1959 Renault Galion three-quarter coach (above), with a body by coachbuilder Amiot, a rare survivor of the type used to transport passengers between isolated French villages.

Nearby, there was a fascinating display of early Parisian buses from the Musée des Transports Urbains. The 1927 Renault TN and 1932 TN6A represented the kind of vehicles that were pounding the streets of the capital after the closure of the tramways.

The TN was Renault's first series-production bus, and the vast 8.19m-long 1927 example featured a timber body by the Paris bus operator and a 45hp four-cylinder motor. After its retirement in 1950, it was later used as a giant campervan.

The later TN6A had an even longer professional career – presumably aided by its 770 chassis having a 67hp petrol 'six' to push it along – and remained in service until 1969, carrying up to 50 passengers.

Fondation Berliet can always be relied upon for some interesting commercials, and this year it excelled itself with an ex-Grenoble town council vintage Laffly street-sweeper on its own stand, plus several contributions to the show's tribute to the centenary of the beginning of the First World War.

It was on this poignant display that I spotted my car – well, truck – of the show, also brought along by the Fondation: the Latil TAR (Tracteur d'Artillerie Roulant). This massive artillery lorry featured four-wheel drive AND four-wheel steering... in 1913! Incredibly, some 3000 of these magnificent 7.5-litre, four-cylinder, 40hp trucks were made to deal with the very worst conditions of the Great War.