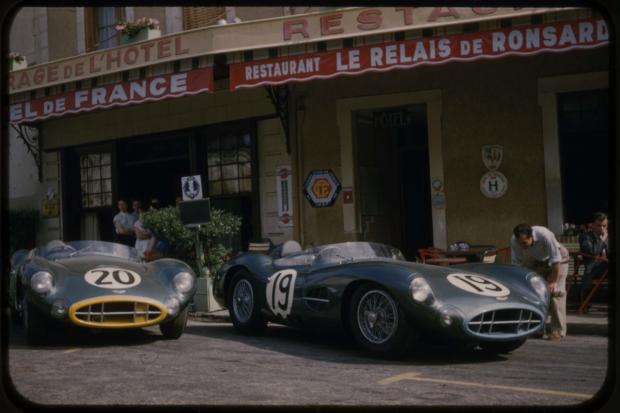 In the new issue of C&SC there is a fantastically evocative scrapbook of pictures from the back pages of the Hotel de France. I was mesmerised by these candid shots from the moment I first saw them. Well who wouldn't be when you see Astons casually parked up outside the hotel (above) or a 917 setting out from La Chartre-sur-le-Loir's Place de la République in 1970 to drive the 40km to Le Mans on public roads?

Anyway, I am a bit of a nerd about Le Mans, especially British involvement in it, and in particular precisely the sort of motor sport that these pictures illustrate. Regardless of the size of the team, drive down to La Sarthe, stay somewhere en equipe, drive to the circuit, do the race, have a party and then drive home again.

The appeal is that that era was when even the motor manufacturers indulged themselves in motor sport in the exactly the same fashion as clubmen, albeit it on a slightly different scale. Hotel instead of tent, a mechanic instead of a toolbox.

Le Mans and motor sport generally aren't like that anymore, the onslaught of professionalism means that cars are hidden away in closed paddocks rather than parked in town squares. Meanwhile, drivers isolate themselves in luxury trailers getting in the zone rather than playing cards with their peers and larking around.

The death of that 'fun' era of motor sport – and I use the parentheses because both winning and staying alive were still very serious concerns – is when my interest in it became rather less obsessive. When Alain De Cadenet could no longer go and fly the flag against the Croesus-rich factory teams on a shoestring budget or the TR Register couldn't stump up the readies to come to the rescue and enter the twin-turbo Janspeed TR7 V8, the romance was gone.

And somehow those pictures in our current issue place the Hotel de France at the centre of everything I loved about Le Mans in the old days.

Yet despite my Le Mans geekery, until this month I had never consciously heard of the place. It was just another small-town hotel like so many others in the region that used to become interesting once a year.

All that has changed now. Seeing the cars and all those generations of the Pasteau family mingling nonchalantly with the racing greats has made the Hotel de France a must-visit Le Mans shrine for me.

In some ways it is a shame that the very thing that brought the Hotel de France and its halcyon days to my attention was the departure of that family after more than a century of running it, in others that turns out to be a bit of a bonus.

Not only does old man Pasteau apparently still pop into the hotel every day for breakfast so he can easily be tracked down, but since he sold the hotel it has received a much-needed makeover after falling into what can best be described as a 'distressed' (spelled s**thole according to one friend!) state.

The proposition of it now is even more appealing and its new owner, well-known historic racer Martin Overington, has big plans for it, not just during Le Mans and the Le Mans Classic, but all year round as a base or stop-off for petrolhead tours. Obviously, he plans to make money out of it – he didn't buy a Blower Bentley by being a rubbish businessman – but by bringing this hotel back to life (and in an extremely enthusiast-centric way) I sort of feel that he has done the likes of me a favour and I owe him my custom.

After all, those that call in will not only stay in a beautifully revamped 22-bedroom hotel from €66 a night (which I note with consternation is considerably less than I paid for a cell in a concrete Camponile in the middle of an industrial estate last time I was passing through France), but that motor racing history is now plastered all over it. Literally.

While curiously browsing the hotel's website, and stealing – I mean borrowing – its pictures, I learned that the smartly turned-out rooms are named after the likes of Shelby and Moss and that amazing photographic archive now adorns the walls in the bar. More than that, look closely at the bar picture and you'll see that hotel's history is told via its unique wallpaper. But the best thing about it being taken over by Overington is that he seems to have developed it with the priorities of a true classic enthusiast: secure parking, classic car hire fleet, breakdown recovery et al.

So the template for this clubman's next trip to Le Mans is set: drive down, stay somewhere historically important (to me at least), drive to the circuit, have a bit of a party after the event and then drive home.