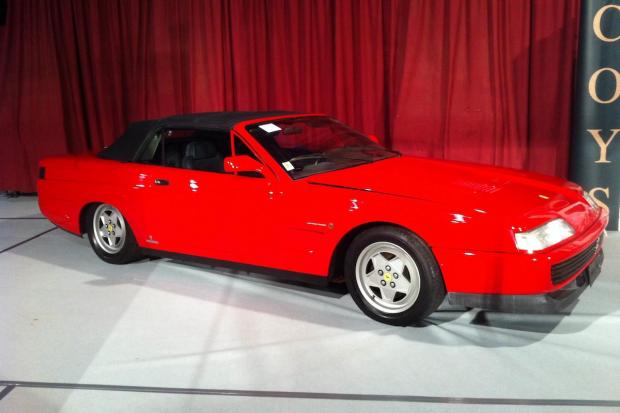 Coys’ auction in Monaco (well Fontvieille to be precise, but you try and draw a line between them) introduced me to a car I had never seen before. I used to think, liked to think, that I knew a thing or two about special-bodied Ferraris, but this one was new to me.

Now we all know that most attempts to “improve” a Ferrari aesthetically end in catastrophe, but with this one I was genuinely unsure.

Yes, at first sight the Pavesi is an ugly old bus, but just maybe, if I lived in Florida in the late-‘80s and had a chunky gold chain round my neck and Aviators hiding my sunken eyes, this could have been the most mindblowing car on the planet.

With its “styling” somewhere between the bland Yankboxes of the day, Honda CRX and a Rover 800, this one-of-three four-seater cabriolet – with electric retractable roof – really shouldn’t work. And apparently the roof never really did very well.

Based on a 412, with three completed cars in 1989, the exotically named Ventorosso is apparently the most plentiful special that Pavesi coachbuilt (rather than simply chopped). As the Americans are fond of saying, go figure!

Subjects to other soft-top experiments by the firm include a Testarossa by the way, although it is less well known than other conversions such as Straman’s. Pavesi also did work on De Tomasos and Maseratis, as well as armour-plating government vehicles. It’s all starting to sound a bit like an Italian Panther-Westwinds isn’t it?

The fact that the Coachbuilding edition of the Beaulieu Encyclopaedia of the Automobile doesn’t list Pavesi – though it does mention Pavesi and Crespi, which operated from 1900 to 1912 making carriages – probably tells you all you want to know, but I was still determined to find out more.

The stock factory-sanctioned Pavesi conversions – carried out on nearly 20 400is – were fiercely expensive in their day with figures of up to €80,000 being bandied around so lord knows how much the fully reshelled car with electric retractable roof cost new.

This car is an auto, too, and has spent the last 14 years in a Milan telecommunications museum. The first car was based on a write-off, the frame was reinforced, the bonnet and boot made of aluminium and the bumpers glassfibre, but the rest remained steel. The job took two and a half years from when Pavesi bought the 1989 412 (April 1991) to completion in September 1993.

This car was regularly exercised by the museum, both locally and on rallies.

Caught in two minds whether to adore or abhor the car in Monaco, I spotted Coys ’Chris Routledge sidling up to me. I told him I was fascinated, but very much in two minds. “I love it,” he delared. “It’s like something out of UFO, Ed Straker’s car.”

Well, I might not go that far, but on the one hand, it isn’t half the crime that Zagato carried out on the 330GTC, and on the other it is not exactly a 275 NART Spyder. To be honest, it isn’t that far removed from Scaglietti’s take on a 412 roadster, and that is a name people might find it harder to sneer at than Pavesi.

Me, I still don’t know whether I love it or loathe it, but someone else liked it enough to shell out €61,240 at the auction.