Taking on the Gran Premio Nuvolari (and losing) 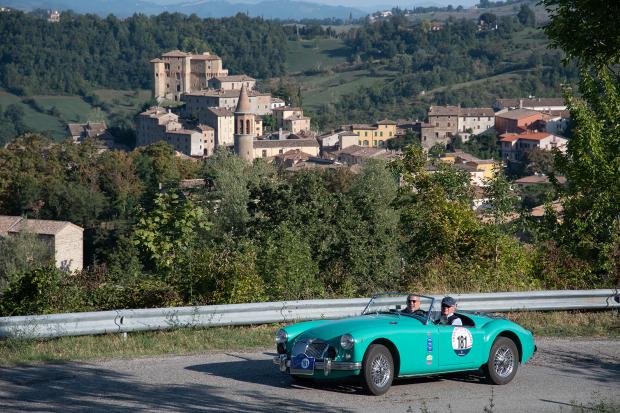 The Gran Premio Nuvolari ranges over 665 miles of spectacular roads and scenery, and is considered to be the most technically demanding event of its type for classic cars, with 90 timed sections.

I’m certainly not about to dispute that, having driven a modern Maserati Ghibli against far older cars only to finish last. Out of more than 300 cars. Some of which date back to the 1920s.

Starting and finishing in Mantua, close to where Tazio Nuvolari was born, this regularity event is now in its 28th year. The 2018 edition was held over the weekend of the 15-17 September, and involved 27 hours of driving across the Italian countryside.

A total of 300 crews, including five all-women and five consisting of under 30-year-olds, entered the event proper, which was open to cars dating from between 1919 and 1972. 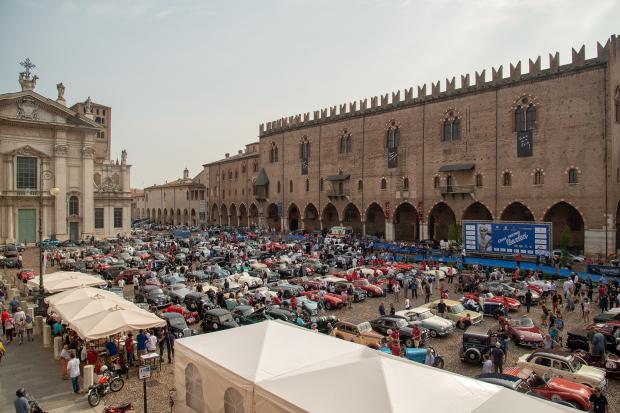 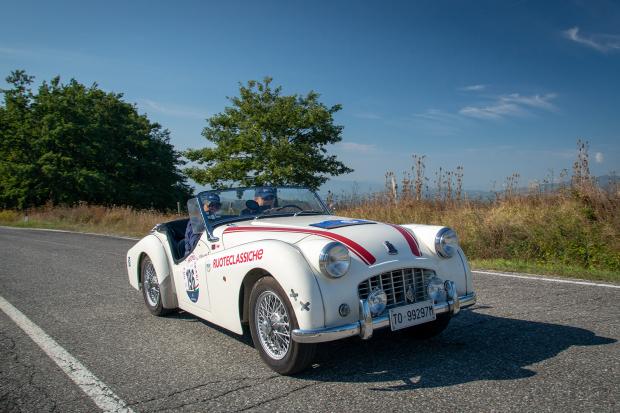 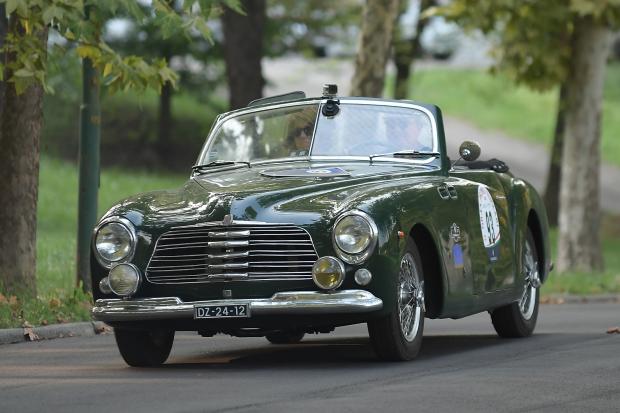 Everything kick off in Mantua, while a TR3 (left) and Fiat 1100 B Cabriolet get stuck in

Fifties sports cars were the essence of the event and it was a special chance to see rarities such as the Cisitalia 202B, Siata Daina Gran Sport and a very early Maserati 1500 in action.

There was plenty of variety, though, with everything from 3-litre Bentleys and Lancia Lambdas to early ’70s Porsche 911s and a single (but very competitively piloted) BMW 3.0CSL taking part.

On the driver side of things, crews came from 20 countries and a few British entrants had made the trip – but Italian and German teams dominated, many driving Jaguar XKs, Triumph TRs, Rileys and vintage Bentleys.

That said, my entirely unscientific head count suggested that the most popular single model in evidence was the Porsche 356 (team ‘State of Art’ was running six of them), because they seemed to be everywhere!

I was keeping the C&SC end up courtesy of event sponsors Maserati and, therefore, was ensconced in the latest Ghibli saloon rather than doing it the hardcore way; even so, it was a surprisingly tough event – as you’ll see from my diary below. 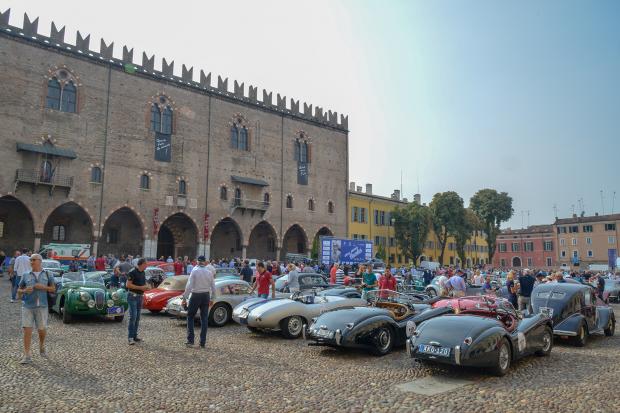 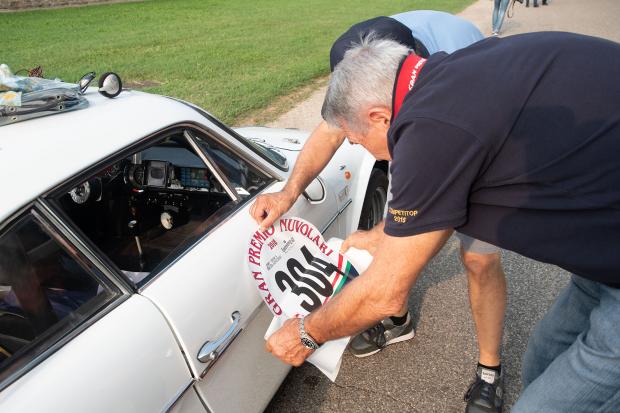 British marques, if not British crews, were out in force – 43 car companies were represented

But before I get to the bad, let’s start with the good: even in a modern, the roads were just fabulous. The first day skirted Bologna and took in about 200 miles through the plains of the Po valley and into the hills, finishing in the glitz of Rimini.

Saturday was the longest day, the highlight being Siena – returning to Rimini via Urbino – while on Sunday it was back to the town square at Mantua where it all started.

In all cases the routes were interspersed with timed sections and while entrants fully exploited the opportunity to open up their cars on the transits between timed sections, the secret of success was not speed but control and knowing how to work your clocks.

The winner was the 1939 Fiat 508 Balilla Sport of Giovanni Moceri and Daniele Bonetti – 508s have been in the top three of this event 14 times since it started in 1991. Here are my notes from the three days. 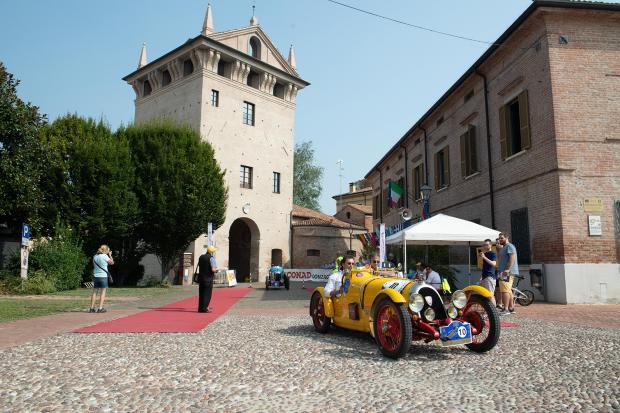 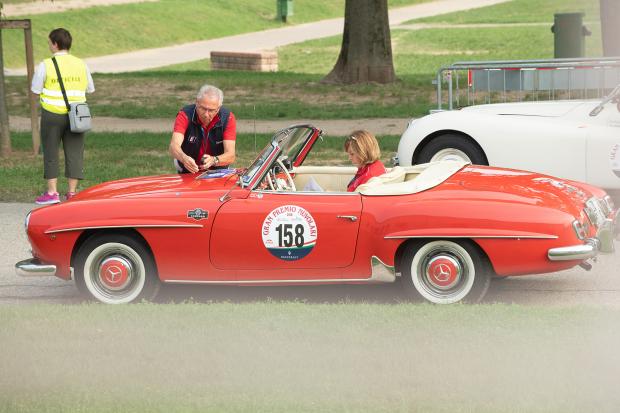 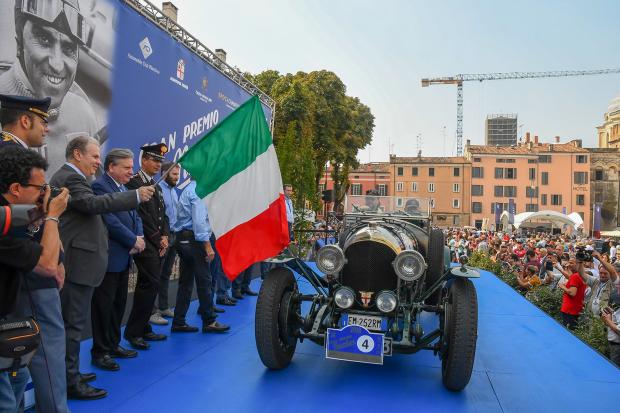 The yellow BNC 527 Monza gets started, the 190SL crew prepare and this 1927 Bentley is under starter's orders

Quite simply a great day with a great car.

Never once did the Ghibli put a wheel wrong as we chased the classics through the planes of the Po valley and up into the cooler air of the hills where the grapes were being harvested in the early autumn sunshine – and we blessed the car’s air conditioning.

I just wish I understood what was going on: still, at least I didn't have to look at the roadbook like poor Anna from Maserati who, I suspect, has more of a competitive streak than me. 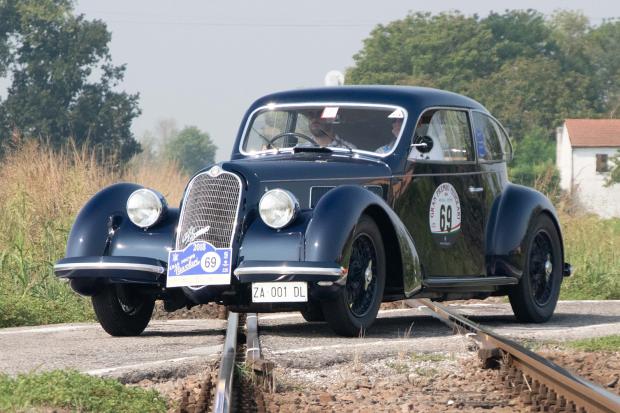 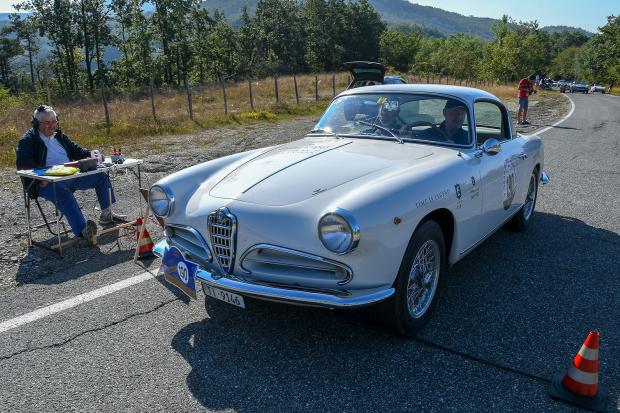 This surprisingly serious regularity event started in historic Mantua, and our lack of experience was immediately apparent.

We were taking part in the Maserati Tribute, an appendix to the main race, which featured 10 Maserati built between 1973 and 2018. The modern Masers were supposed to head off from the podium first, but we couldn't even get that right and things seemed to get worse from there on.

The next stop was a quick but tasty lunch at Mirandola after a few regularity tests, the idea being to be as, erm, regular as possible; the less said the better, really.

What followed was hour upon hour of great driving roads, with crews who'd come from as far away as Japan, Russia and Australia competing in a mouth-watering selection of cars.

It was wonderful but tiring stuff, even in one of the best luxury saloons on the road. I think I would need a week on a health farm if I had been driving a 60-, 70- or 80-year-old sports car! 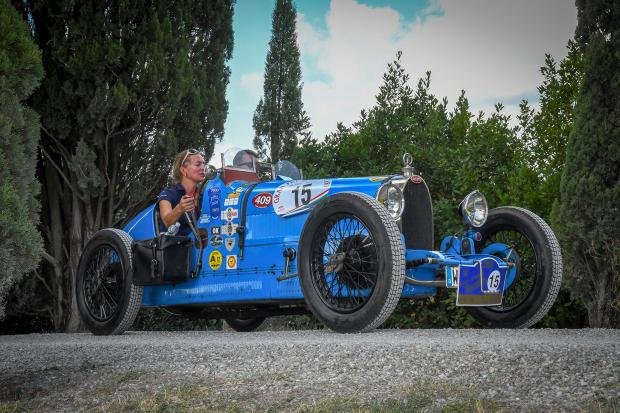 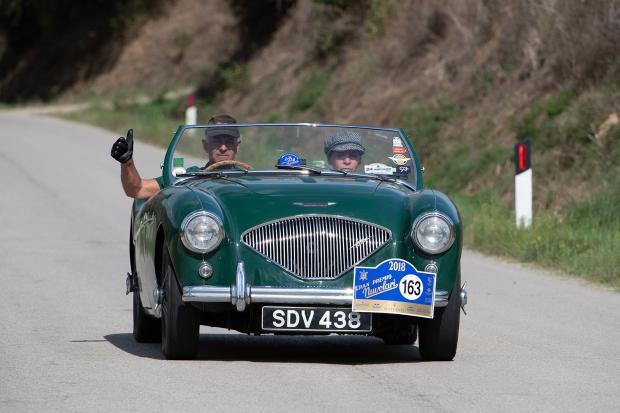 A Dutch/Belgian crew in a 1927 Bugatti (left), Brits Mark and Joanna Knight in their Austin-Healey 100/4

This was the day I discovered the ‘sport’ settings on the Ghibli! It was almost like driving a different car, complete with sportier exhaust and double blips when down-shifting.

This was also the day that we gave up trying to do the regularity sections, although the theory behind them all started to sink in.

To those who were taking it seriously, I can only apologise if we got in your way or cramped your style (or both). 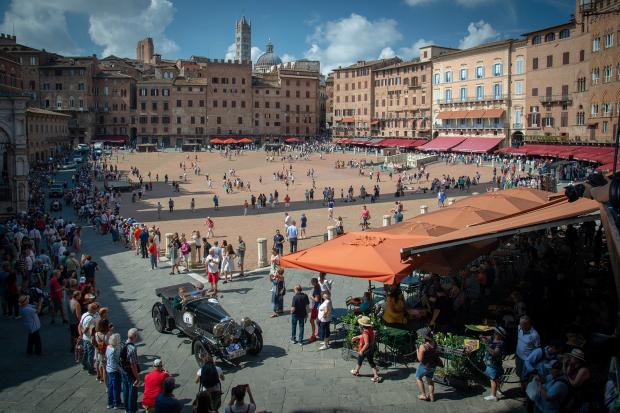 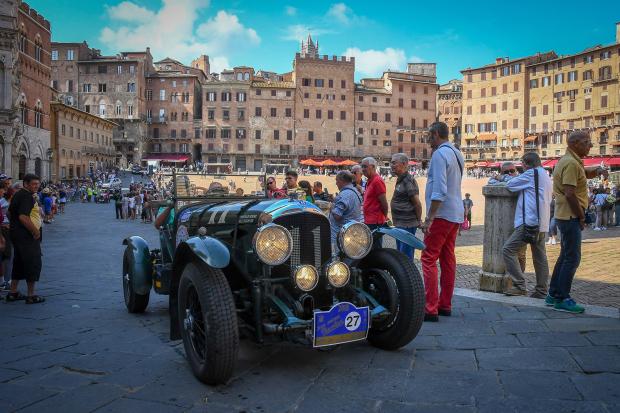 Siena was a highlight of Saturday's route

This event could only happen in Italy where crowds of happy people turned out to cheer the cars in the beautiful town squares, while others urged the crews on through the countless mountain villages.

Even the police got into the spirit of things. Motorcycle outriders set a cracking pace for the classics through the hairpins of the non-competitive transit sections, clearly relishing their role in proceedings.

The sounds and smells of the cars are intoxicating and it is amusing to watch a humble Fiat saloon from the 1930s not only keep pace with some moderns, but look for overtaking opportunities where even I thought twice – and I had 350bhp! 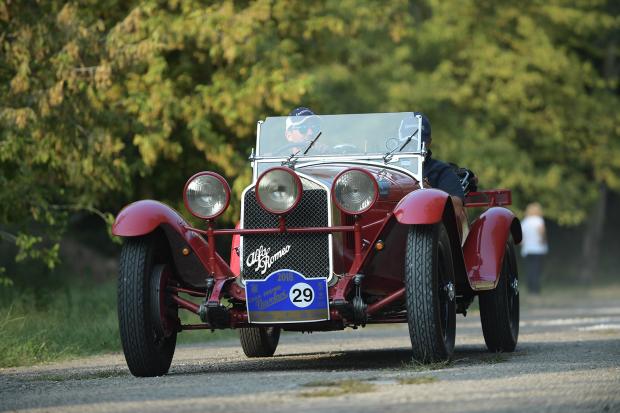 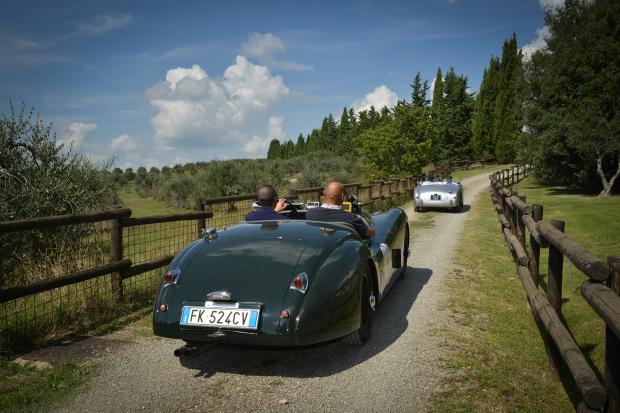 There was a fantastic early-morning buzz as the competitors tended to their classic cars after a night outdoors.

Despite missing one of the oh-so-comforting pink arrows provided by the organisers, we felt we’d finally got the hang of the roadbook.

We even had a basic grasp of the regularity sections although to paraphrase Winston Churchill (on golf), they still rather felt as if they were a way of spoiling a good drive.

The real fun was to be had between the tests, as modern car drivers looked on in bemusement at the enthusiastically driven classics.

Needless to say I did not cover myself in glory overall: our last place came after we accumulated 60,000 penalty points. The final indignity was to discover that a man who had only done the event for half of the final day had come higher in the rankings.

We returned to the square at Mantua as faux heroes, due to our last-place finish – the shame! But what an amazing event to be part of. 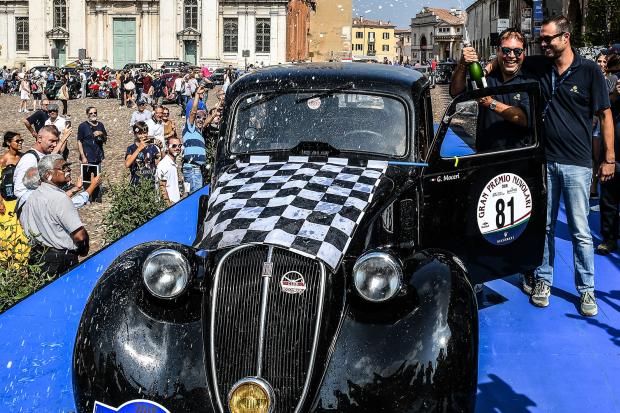