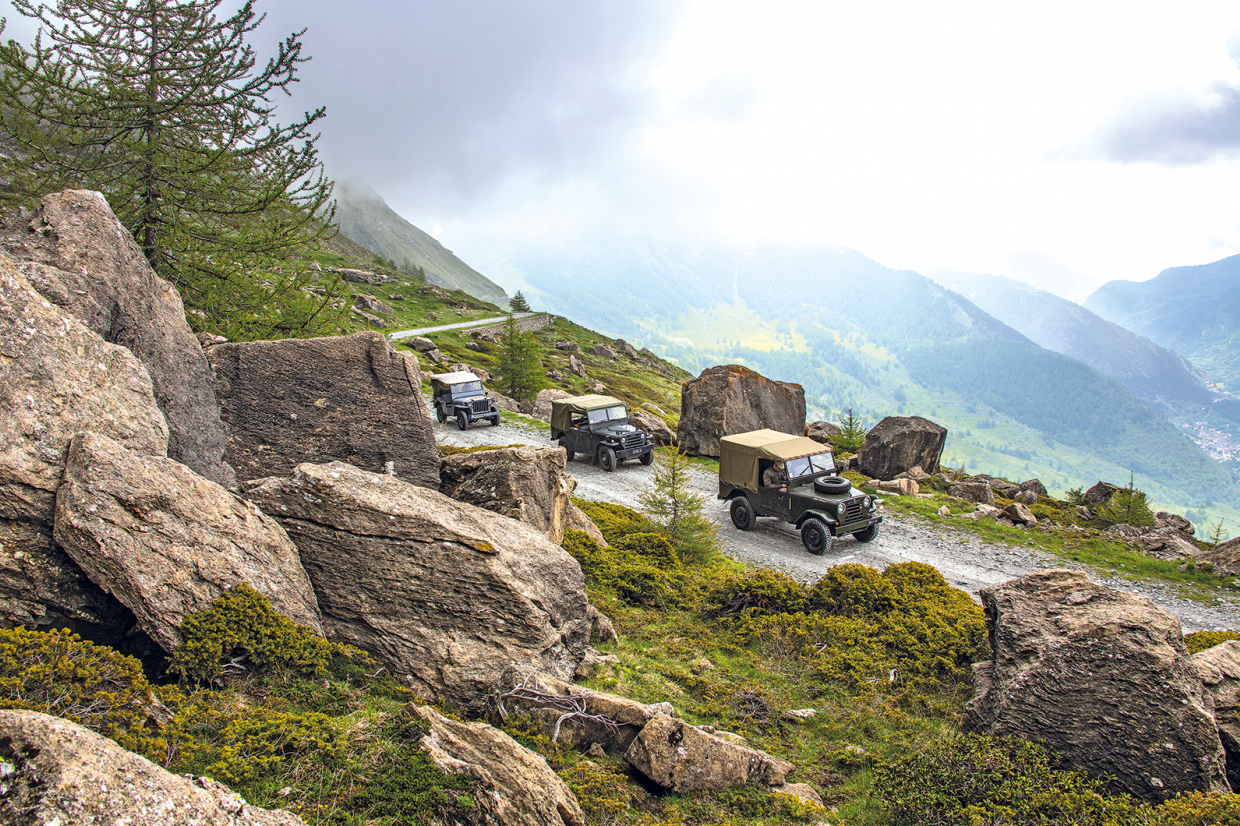 One of the harsh remnants of winter that has survived into the Alpine summer, way up here in a depression below the Colle dell’Assietta main ridge.

Would the XXL excavator of an Italian road construction team be suitable to push the modern Jeep out of the snowdrift?

Hectic argument ensues over the best way to progress, and after a good half an hour the noisy problem-solving debate – conducted in a mixture of rapid-fire Italian and dramatic hand gestures – appears to be edging towards a result. 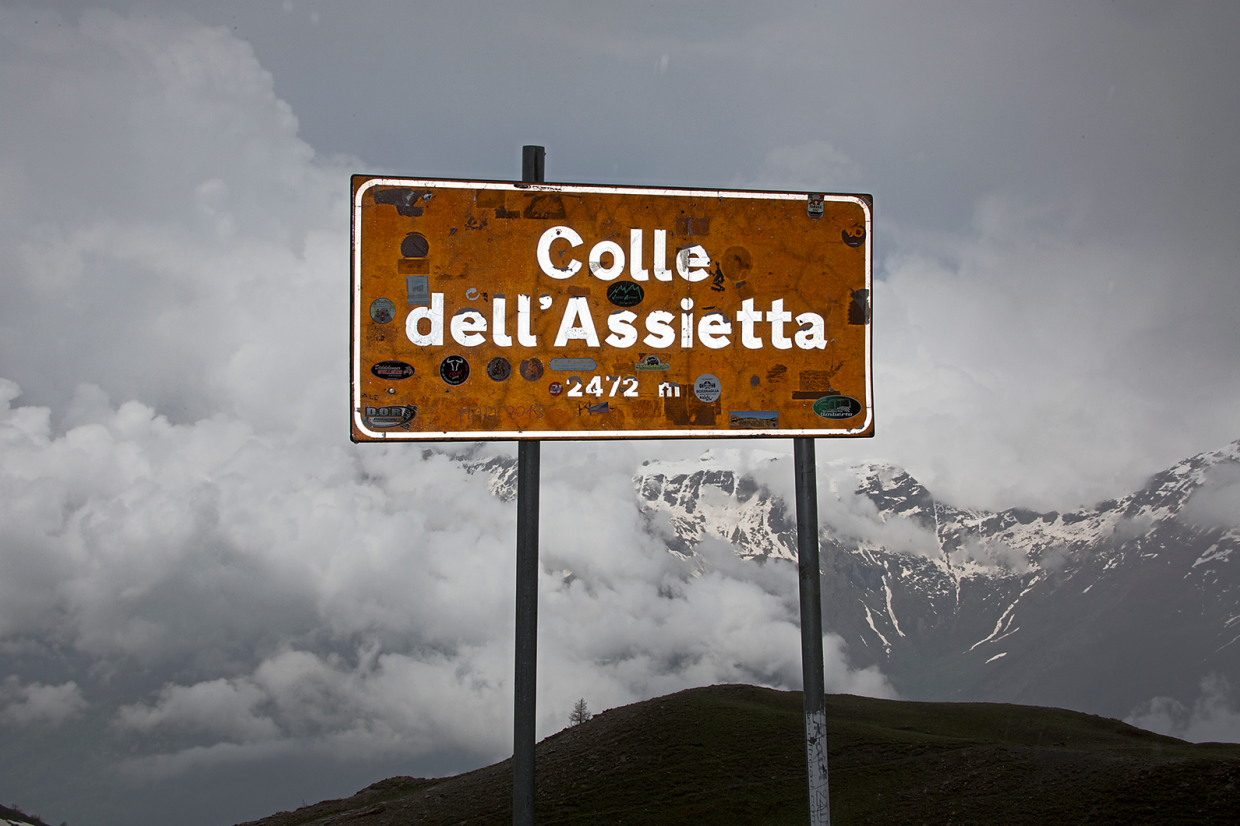 With a regretful shrugging of the shoulders, the conclusion is that there is simply nothing more to be done: the Cherokee will just have to stay where it is until the snow around it thaws, or until fate leads it to a freezing grave.

But one onlooker has been following this operetta very quietly, his head cocked and his face motionless.

Franco Melotti is one of the leaders of the Italian Alfa Romeo Matta Club, and was once a hard-hitting warrior in trials.

And right now he’s fed up. 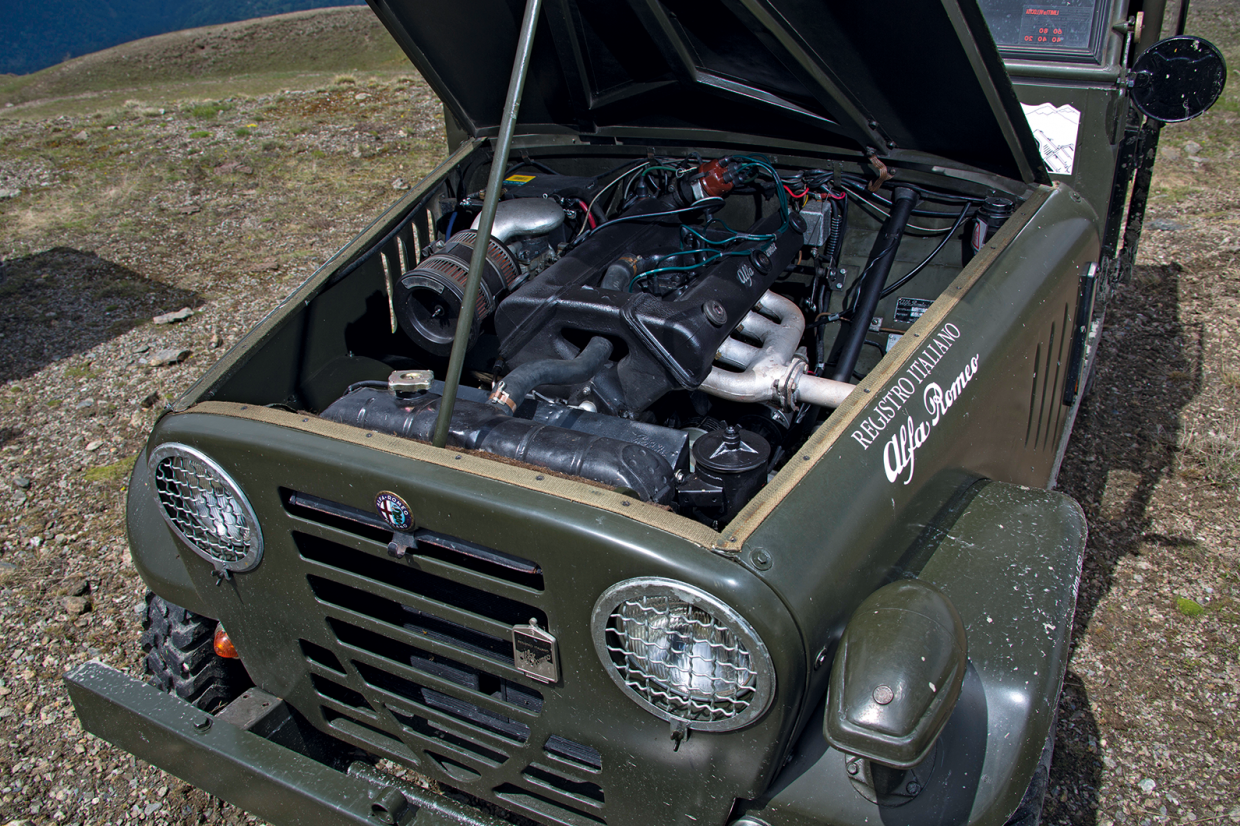 Behind him, two other classic off-road vehicles are waiting to climb the final few metres of the pass, but the stranded modern blocks their path.

Without a word, Melotti climbs into his 65-year-old Alfa Romeo 1900M AR51 ‘La Matta’ and, to the growing horror of his audience, crosses an avalanche of debris in the fall line before driving the ancient military machine over to the front of the stranded SUV, tethering the new to the old and finally hauling the 2020 Jeep from the ice, completely without spectacle.

Melotti’s ex-military AR51 was extensively used for trials in the past, with the corresponding modifications, but in recent years it has been lovingly returned to its original specification and condition, as first delivered to the Italian Army, complete with the classic Alfa Romeo shield just visible in the shape of its front grille. 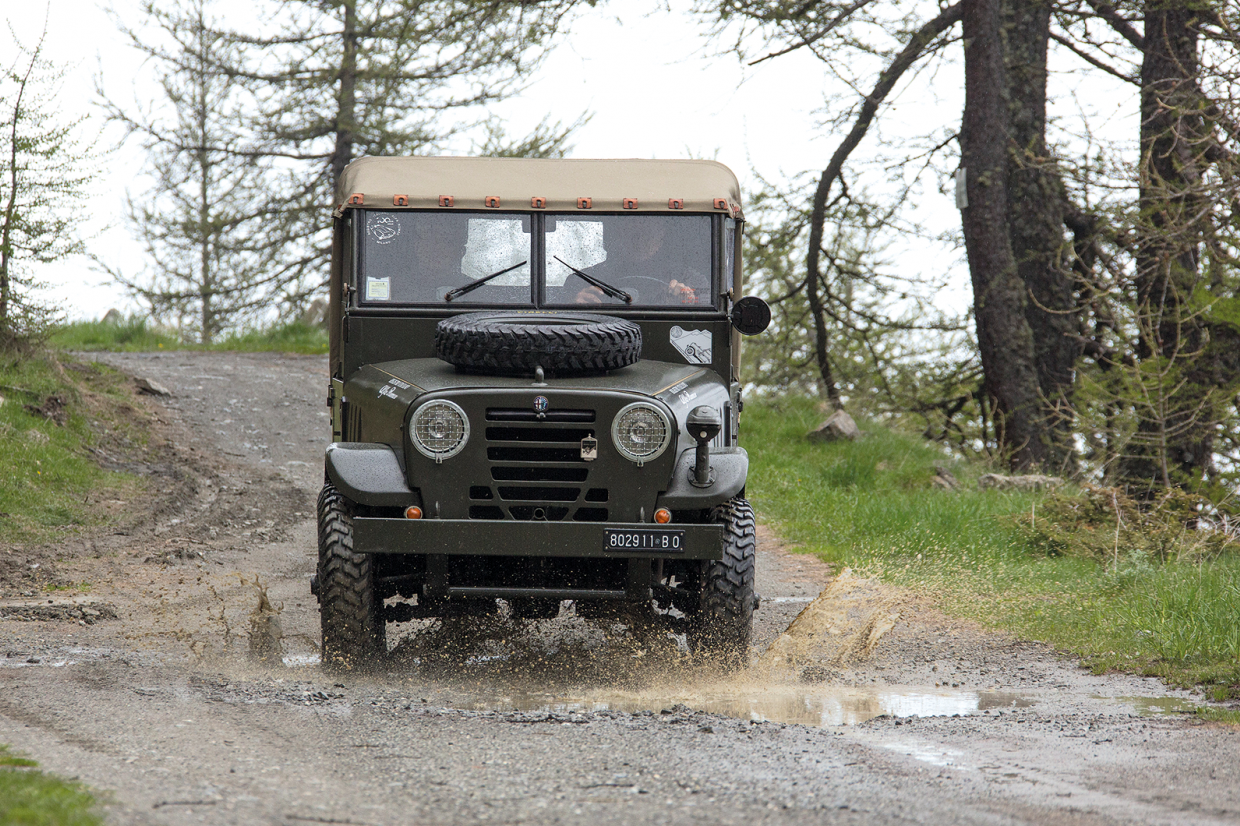 Yet it is still enjoyed in the manner for which it was created, and the successful rescue seems to have a positively euphoric effect on Melotti.

Having driven the AR51 with the strictest discipline for hours, in convoy with a Fiat 1101 Campagnola and a Willys MB Jeep up from the valley behind Turin to almost 2500m in altitude, he is now giving his Alfa the spurs.

And no wonder it is able to respond, because this four-wheel-drive workhorse shares its mechanicals with some of the most desirable GTs of the ’50s – which goes some way to explaining its nickname: La Matta, or ‘The mad old woman’. 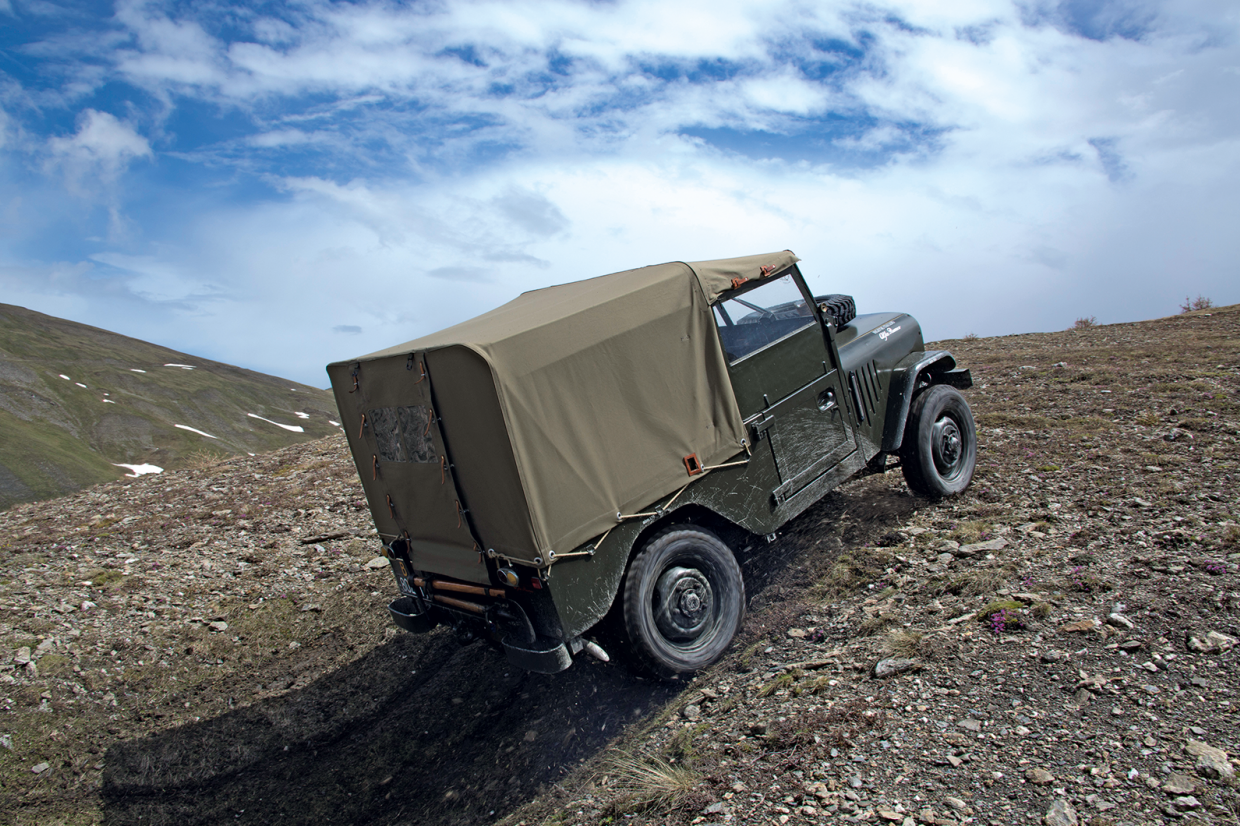 Alfa’s AR51 is a very versatile off-roader, although its lack of side windows in the tilt doesn’t help rearward vision

Commissioned by the Italian Ministry of Defence, it’s a remarkably capable machine as Melotti ably demonstrates by picking his way through the loose rubble, occasionally calling on the assistance of a crowbar over larger rocks, then accelerating out of a pit filled with mud and with a near-90º angle of ascent with an alacrity that has to be seen to be believed.

To illustrate its abilities, Alfa Romeo pitched a Matta up a church staircase at the pilgrimage site in Assisi during the new car’s first public appearance. 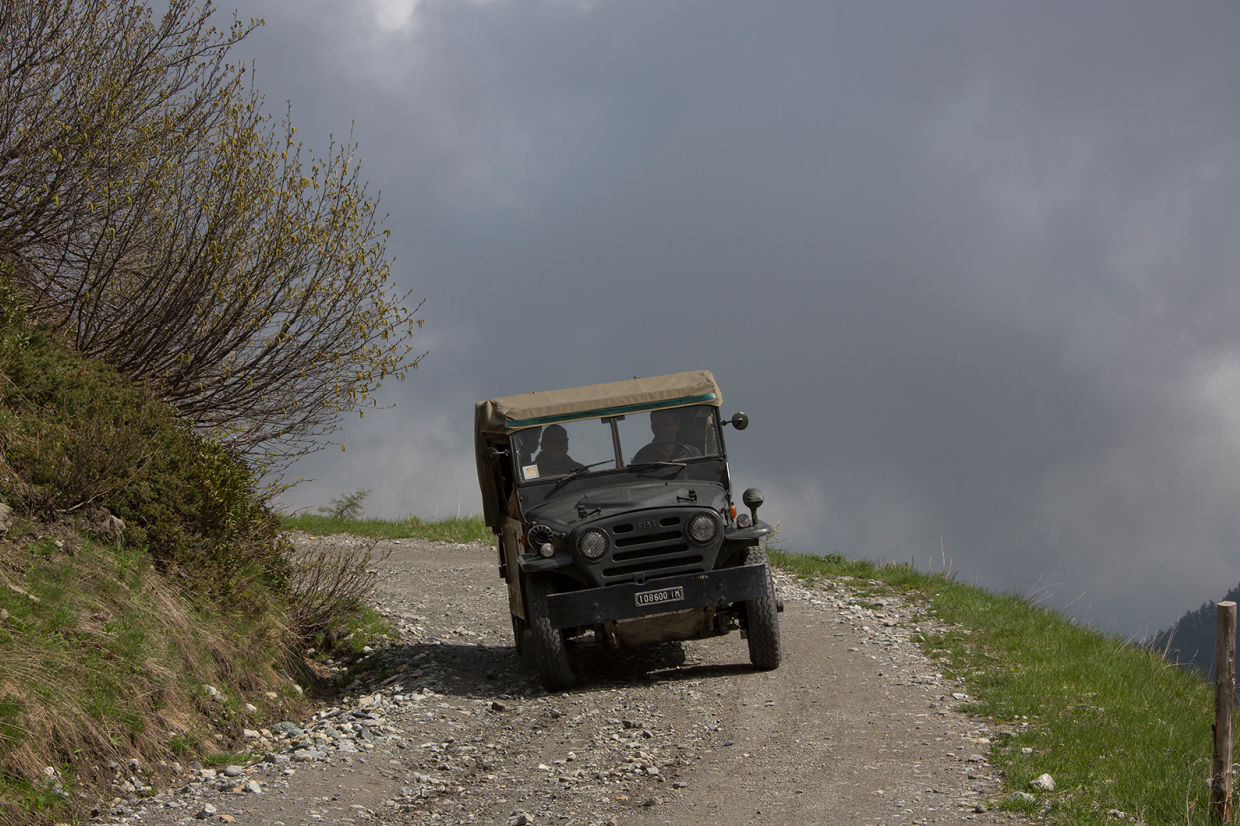 As well as proving that this Alfa could climb, it was a neat reminder of a similar stunt pulled a decade earlier in 1941, when a Willys Jeep scaled the steps of the Capitol Building in Washington in front of the assembled press.

This was to kick-start a legendary military career for the Jeep, one that the Alfa Romeo Matta was not able to emulate: between 1952 and ’54 the Italian armed forces only took a little more than 2000 AR51s, while the civilian variant – the AR52 – remained even more exclusive with just 154 cars built, finding use as everything from farm hacks to rugged State Police patrol cars.

Cost played a significant part in the Matta’s demise as a realistic proposition for the cash-strapped Esercito Italiano, still recovering from the devastation of WW2, and beginning in 1952 the Republic of Italy slowly replaced the Alfa with the much cheaper Fiat Campagnola.

‘The go-anywhere vehicle that doesn’t need a road’ was also much longer-serving than its compatriot, lasting from its launch at the Fiera del Levante show in Bari in 1951 until 1973, when it was succeeded by the 2-litre ‘Nuova’ Campagnola that would soldier on until 1987. 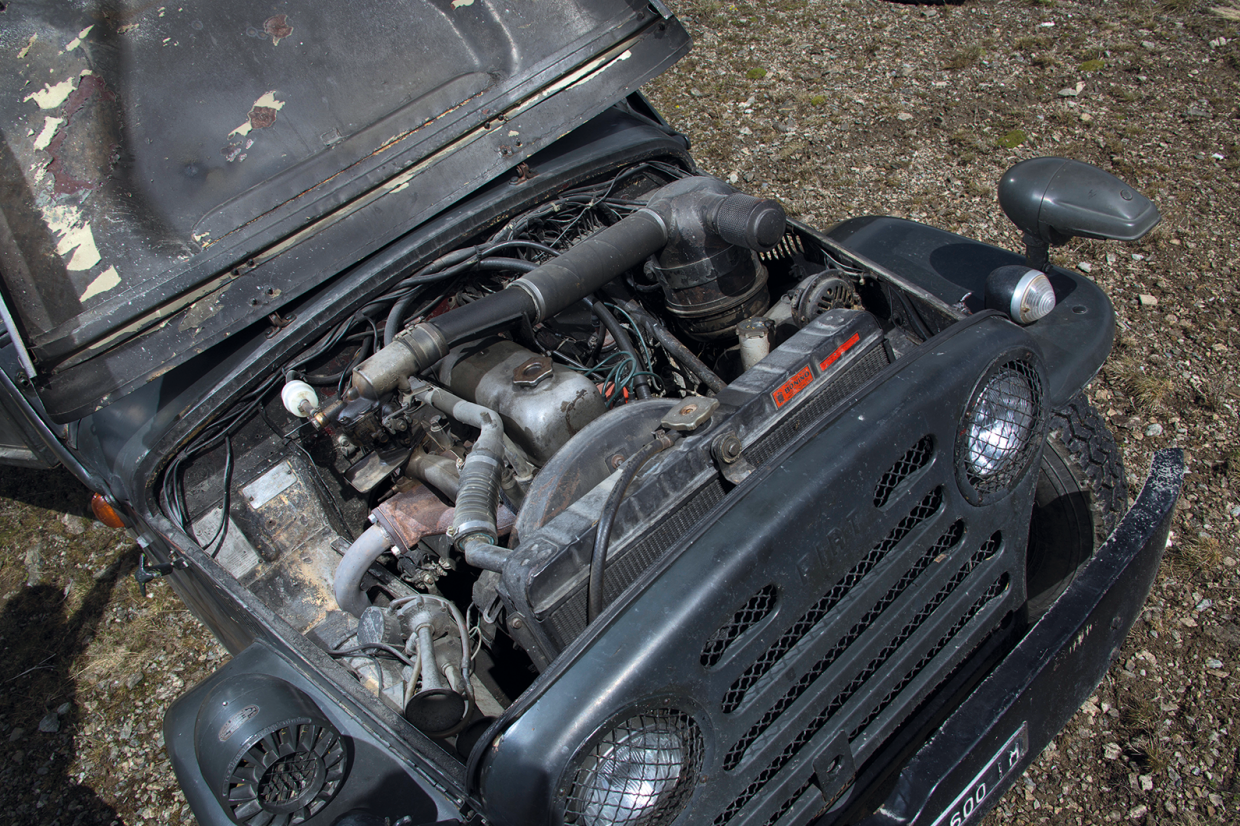 The pushrod ‘four’ made the Fiat more cost effective

First-series cars were offered in both petrol and diesel forms, each displacing around 1.9 litres and producing between 40bhp and 60bhp depending on tune, and the Campagnola developed a reputation as a long-suffering delivery donkey in both civilian and military use.

This 1950s example was originally employed by the Carabinieri, which shared the military version of the Fiat, and exudes utilitarian charm.

It was recently rescued from a scrapyard, and its new owner is planning extensive resuscitation measures to rid the Campagnola of its rather dramatic patination, hard evidence of its long years of service in the police force.

Until then, the brave Fiat will continue to toil, its 1901cc overhead-valve engine whistling a bit asthmatically but without complaint as the Campagnola steadily makes its way up the serpentine route to the top of the pass. 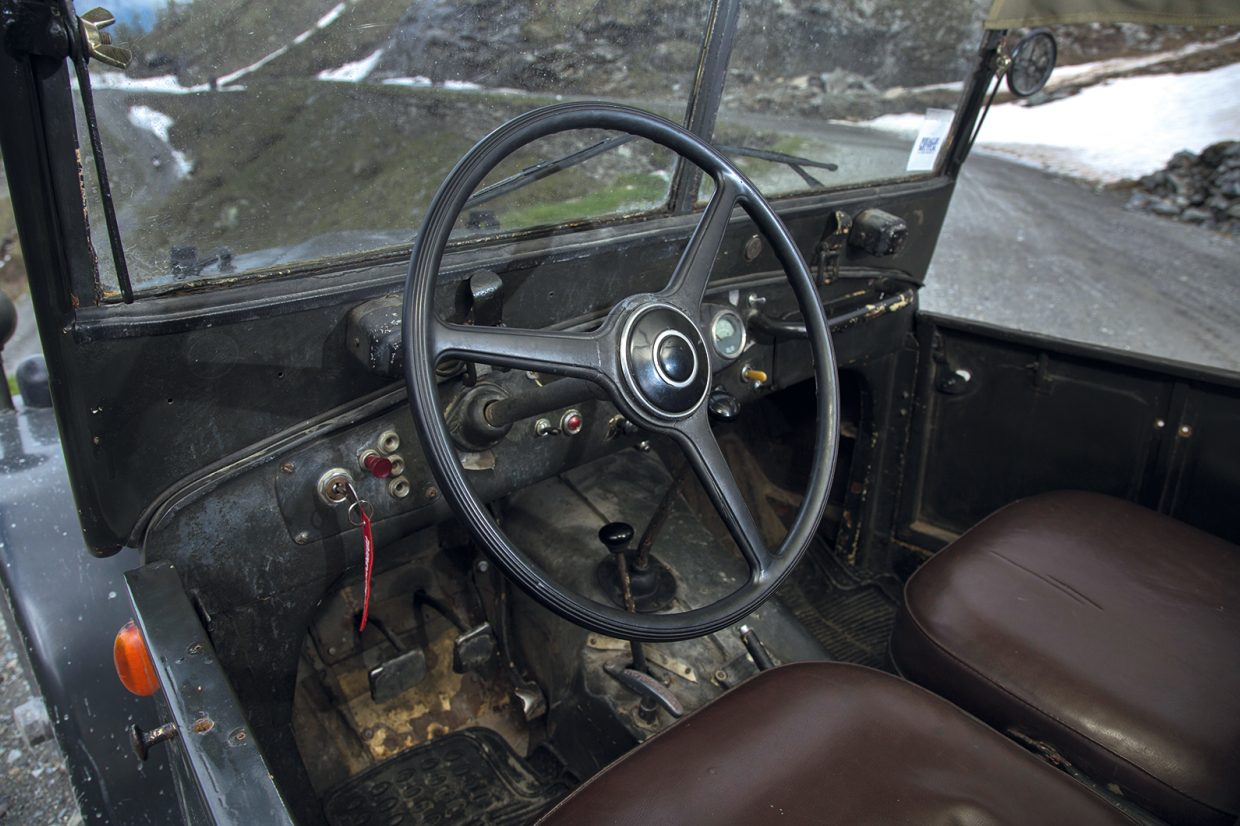 Unfazed by a flash thunderstorm at around noon, it splashes stoically on through the resulting deep puddles on the flooded path, plodding up drastic inclines with a cold-blooded resting heart rate.

This is its natural terrain, these stony roads up in the mountains having been originally laid out by the Italian military.

By the end of the day, the worn Fiat is ready for a rest in the veteran’s sanatorium.

The battered panelwork, the lurching steering, the crooked brakes, the burnished pedals, the cracked paintwork and the worn controls are crying out for care, but this tired soldier glows with a touching dignity. 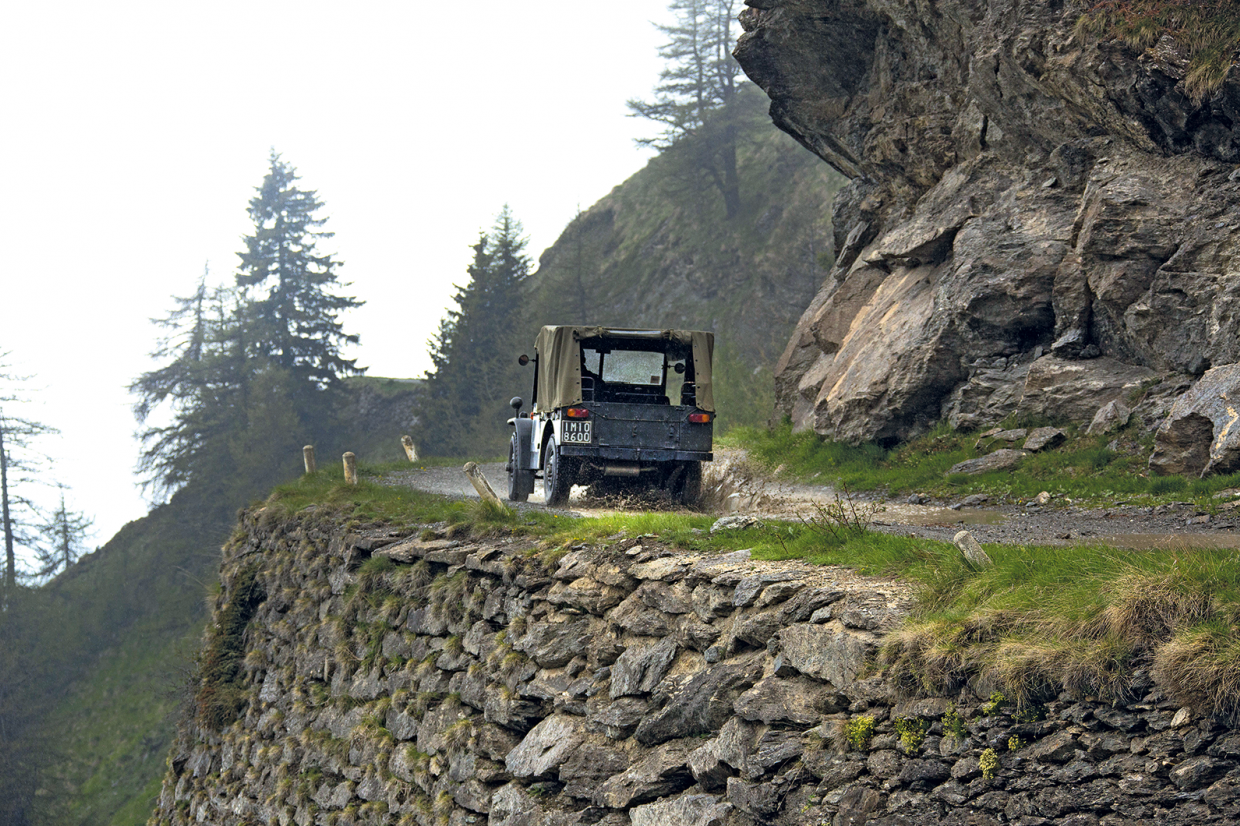 The Fiat is in its element on the mountain

Only late in the evening, on the final kilometres of the autostrada, does the Campagnola admit defeat.

Every detail of their design reveals the humourless pragmatism of procurement regulations.

It is about structures that are as robust as possible, that can cope with constant abuse, can be repaired by amateur mechanics out in the field – with a stone, if necessary – and that provide a solution instead of a problem for the soldiers who rely on them in the toughest conditions. 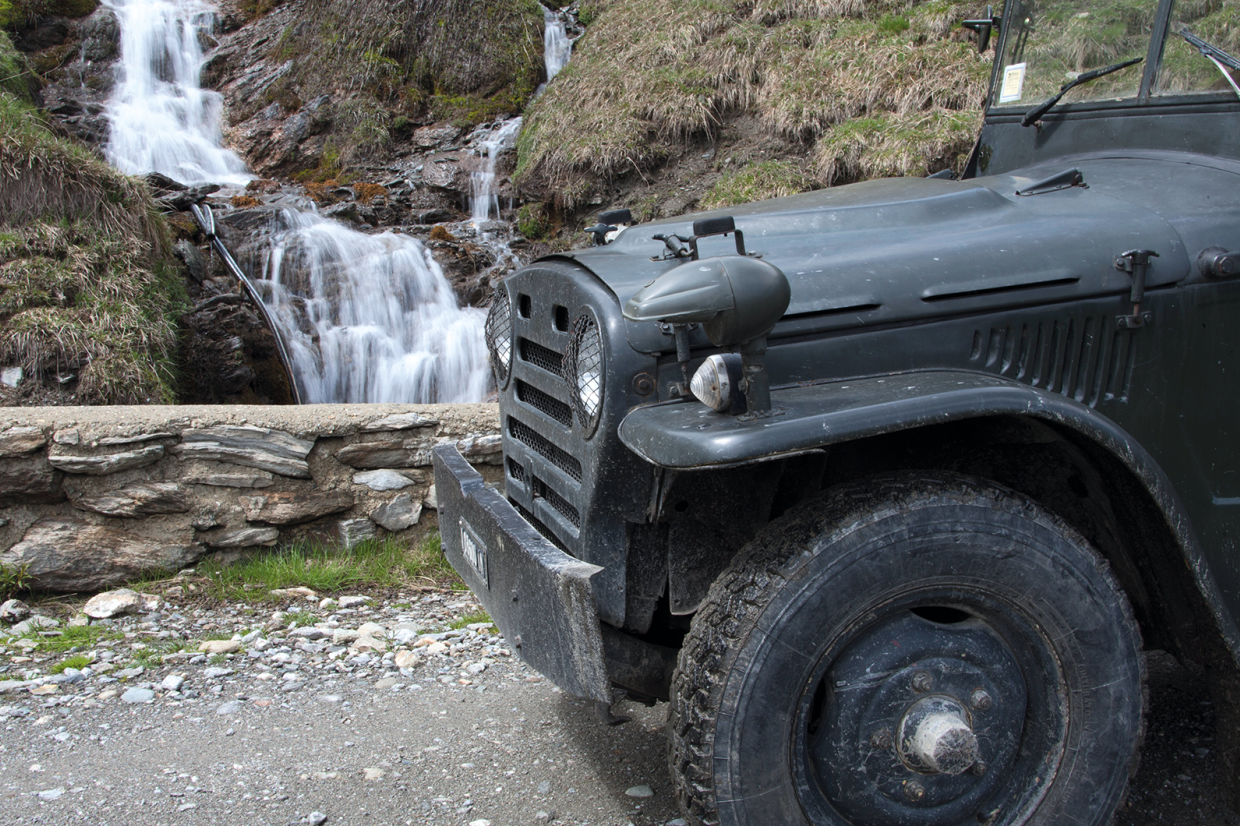 An anti-glare lamp sits atop the Fiat’s front wing

The fact that the mushroom-like anti-glare lamp on the front wing of the Matta sits alongside an Alfa Scudetto logo is perhaps a symbolic explanation for the extremely short service life of the Alfa Romeo: too much technology, too much identity, too much emotion for a machine that is all about purpose.

On the other hand, branded jewellery is a completely alien concept to the Willys MB.

The American original off-roader was born as a workhorse for the US Army and, in stark contrast to the cult status it has achieved today, was for a long time a forgotten utility vehicle.

Designed to take up as little space as possible on the transport ship when stacked on top of each other (hence the folding windscreen, which has absolutely nothing to do with summer driving fun); to be parachuted out of cargo planes; to run, crawl, climb, wade, maybe even swim – and, if in doubt, get by on just one cylinder. 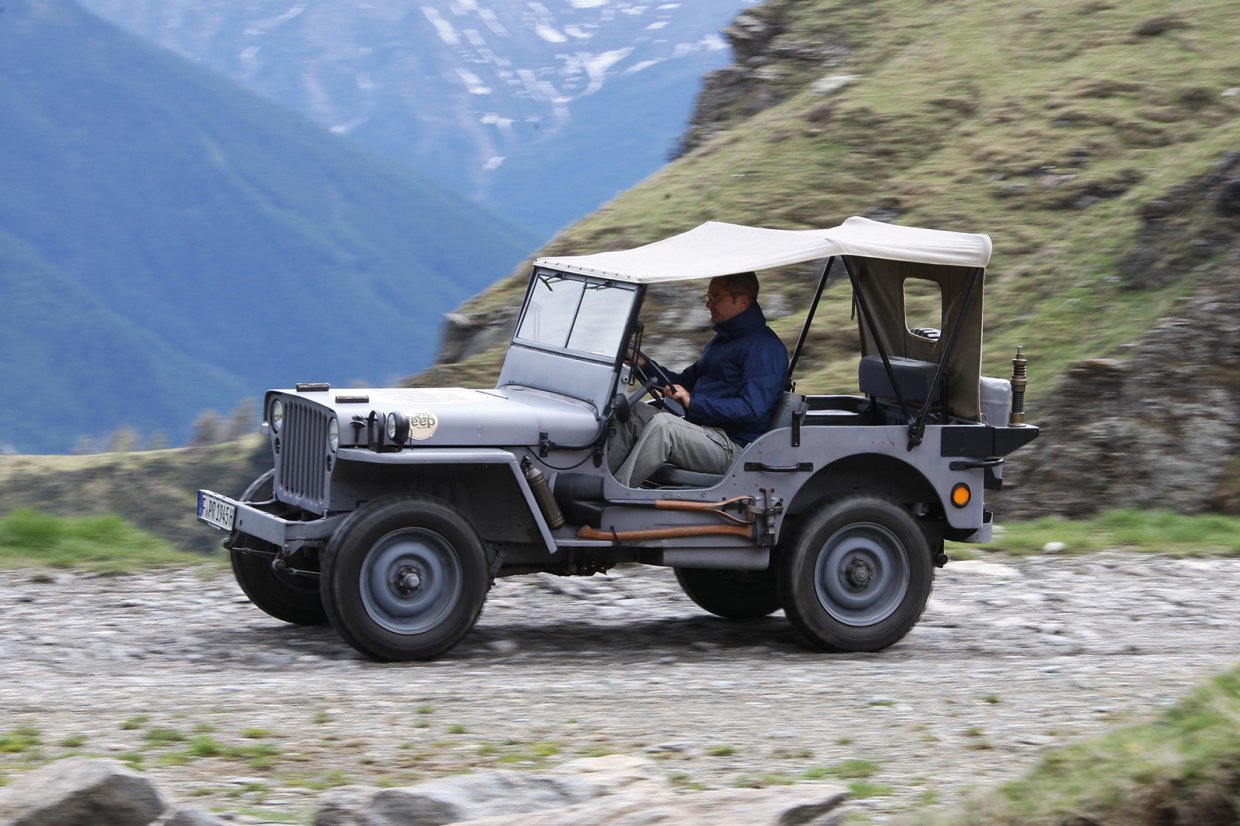 The Willys Jeep might not be much to look at, but it carries plenty of history

Yet to dismiss this pioneering machine as merely a military support act is to do it a disservice, as no lesser a man than General Dwight D Eisenhower said: “The Jeep, the Dakota and the landing craft were the three tools that won the war.”

Designed by American Bantam, the Jeep was mainly built by Willys-Overland and Ford – whose GPW is near identical to the MB – before Hotchkiss took over in peacetime with its M201, which carried on into the ’70s.

Back in 1940, when the US military laid out its requirements for a light, all-terrain infantry vehicle, surely no one could have suspected that the barren minimalism of the MB would be the foundations of a phenomenon, and its squat, functional features the trademarks of an automotive legend.

Elaborately restored like so many examples are today, this Willys MB has many stories to tell. 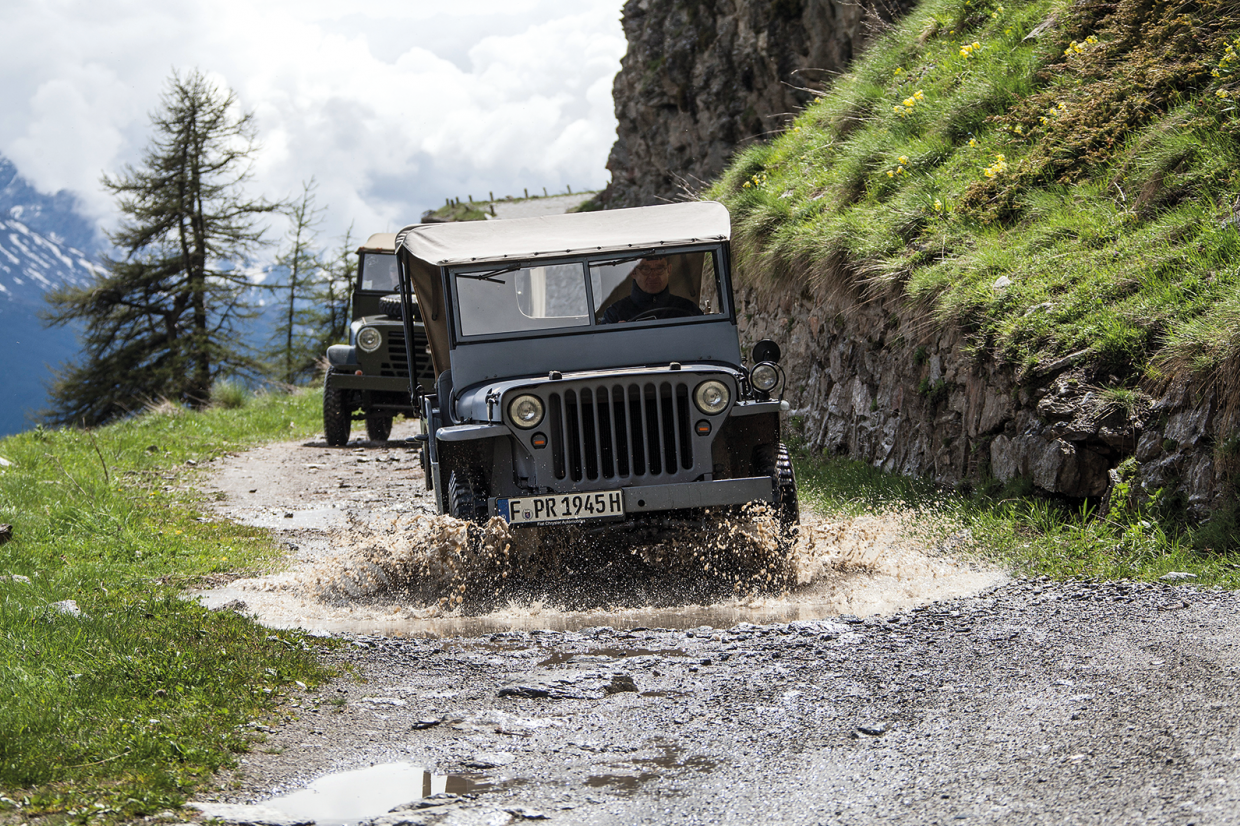 There was no such thing as ‘standard’ between 1942 and 1945, the Jeep instead being manufactured pragmatically and configured in a variety of ways to suit the tasks that lay ahead for each example.

Here, it’s painted in the matt grey of the US Navy and is authentic down to the last detail – only the rifle in the holder below the windscreen is missing, for obvious reasons.

Agile as a goat, faithful as a dog, the Jeep is up to any off-road challenge, but on the long drive back down into the valley Melotti sets a rapid pace in the Alfa.

The Fiat takes it easy, but the eager little MB is keen to learn a lesson in drivability. 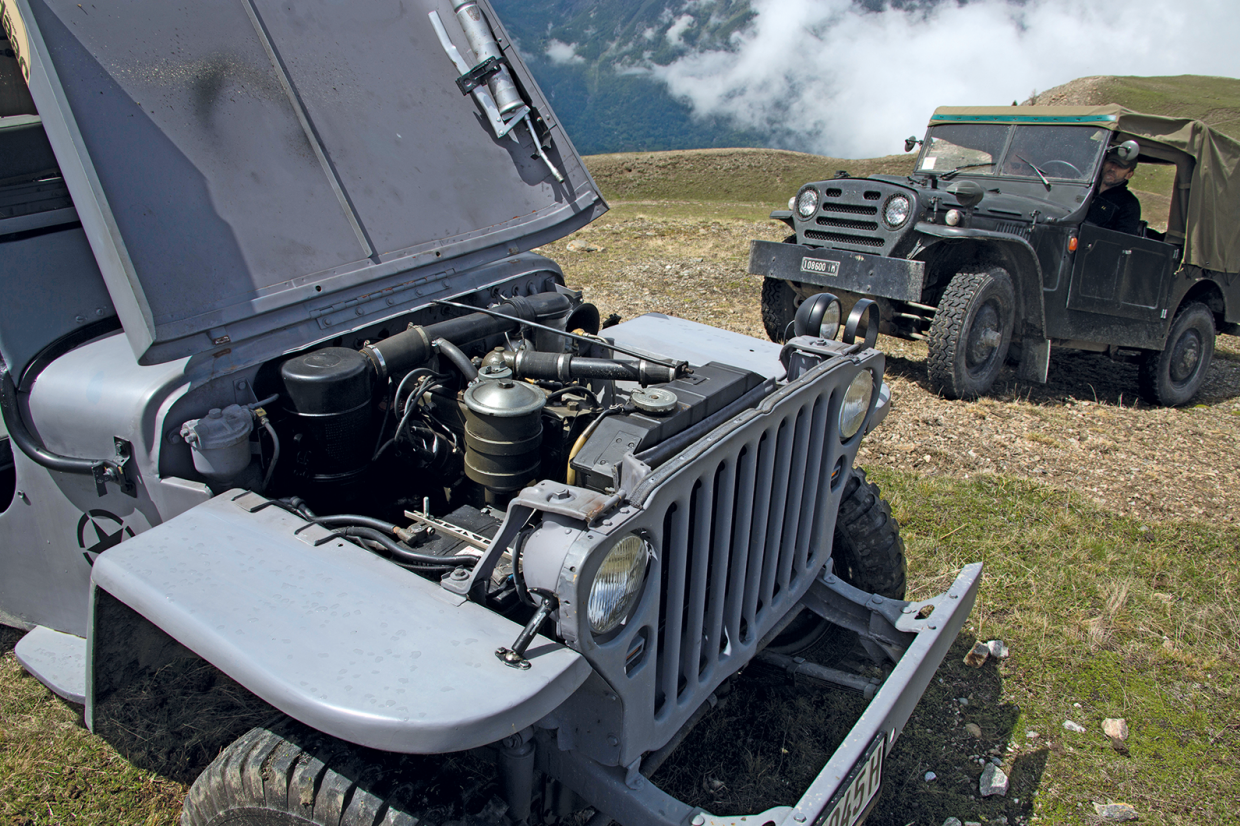 The 60bhp 2.2-litre ‘Go-Devil’ sidevalve ‘four’ feels remarkably energetic, its 105lb ft of torque ensuring that even in hairpins there is no need to trouble the three-speed ’box with a downshift.

The steering is indifferent, but easy enough to place, and the brakes have no trouble slowing little over a ton of car.

There is fun to be found in driving any of this trio, a joy in the very rudimentary experience that each one of them provides.

But while the Fiat is the workhorse and the Alfa Romeo is the choice of the sophisticate, this whole genre was invented and remains defined by the original Jeep. 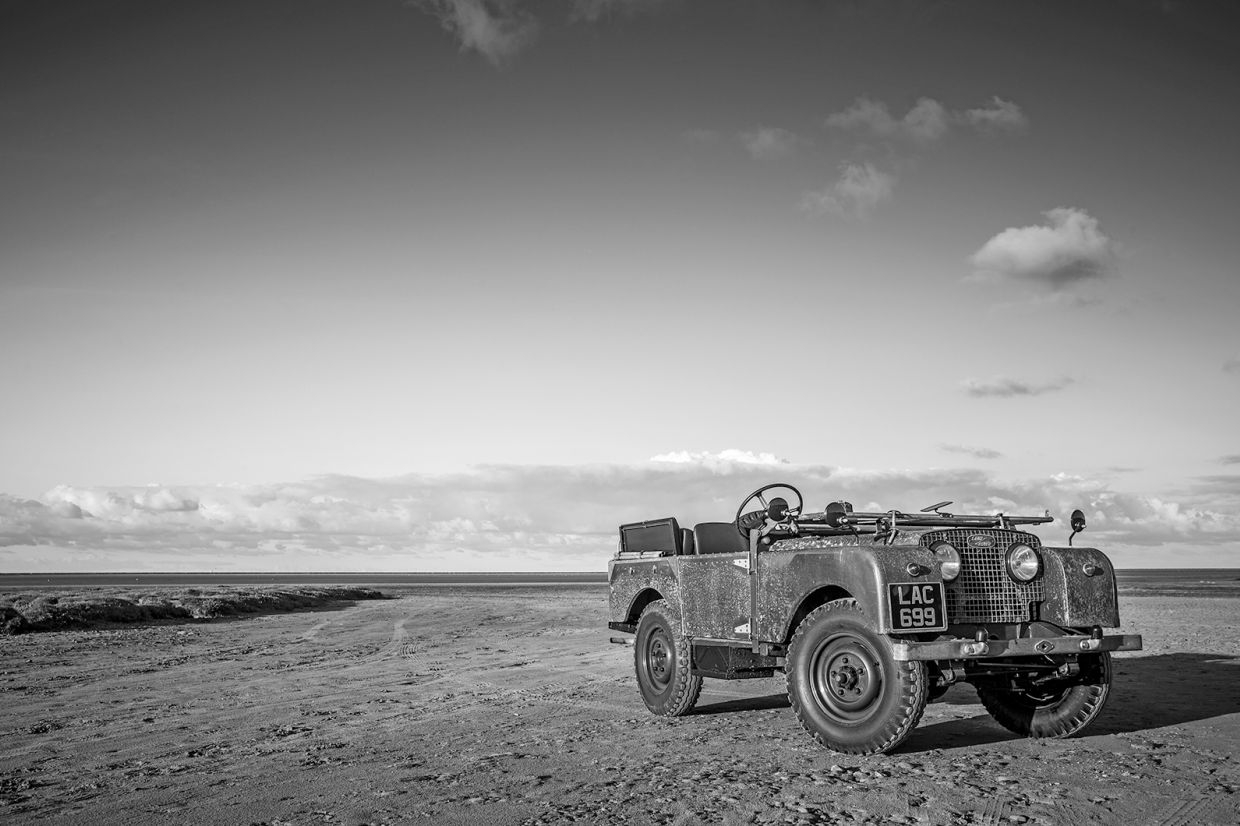 Not the original, perhaps, but arguably the best – so much so that it continued to be developed for nearly 70 years in production following its 1948 introduction.

The Land-Rover Series One begat SII, SIIA and SIII before the first major change with the Ninety/One-Ten in 1983, which in turn evolved into the long-serving Defender. 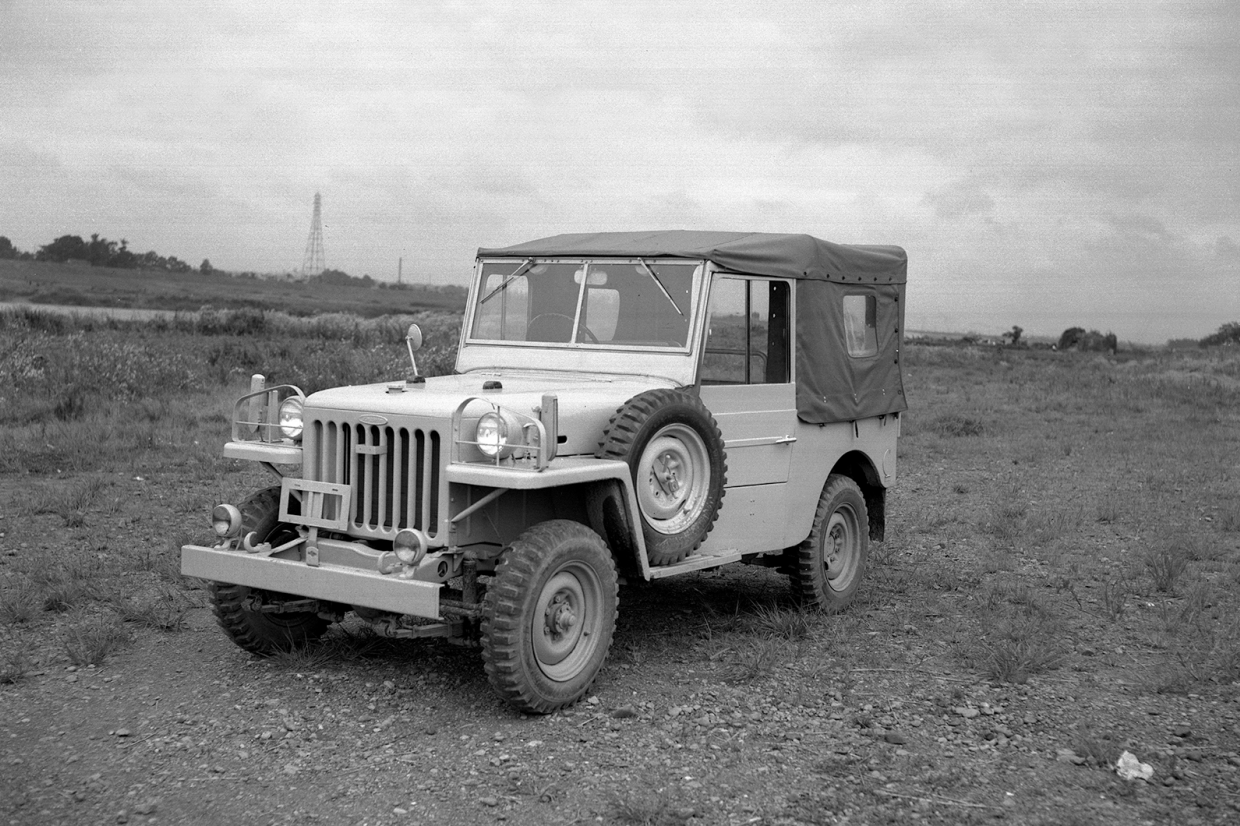 The Toyota has been almost as long-lived as the Landie

Another model to which a current incarnation can trace a direct lineage, and another that is developing cult-hero status with prices on the up.

First appearing as a Jeep clone in ’51, albeit with a six-cylinder engine, the Toyota Land Cruiser BJ was conceived for military use, but swiftly developed for civilian applications as Japan’s Land-Rover equivalent. 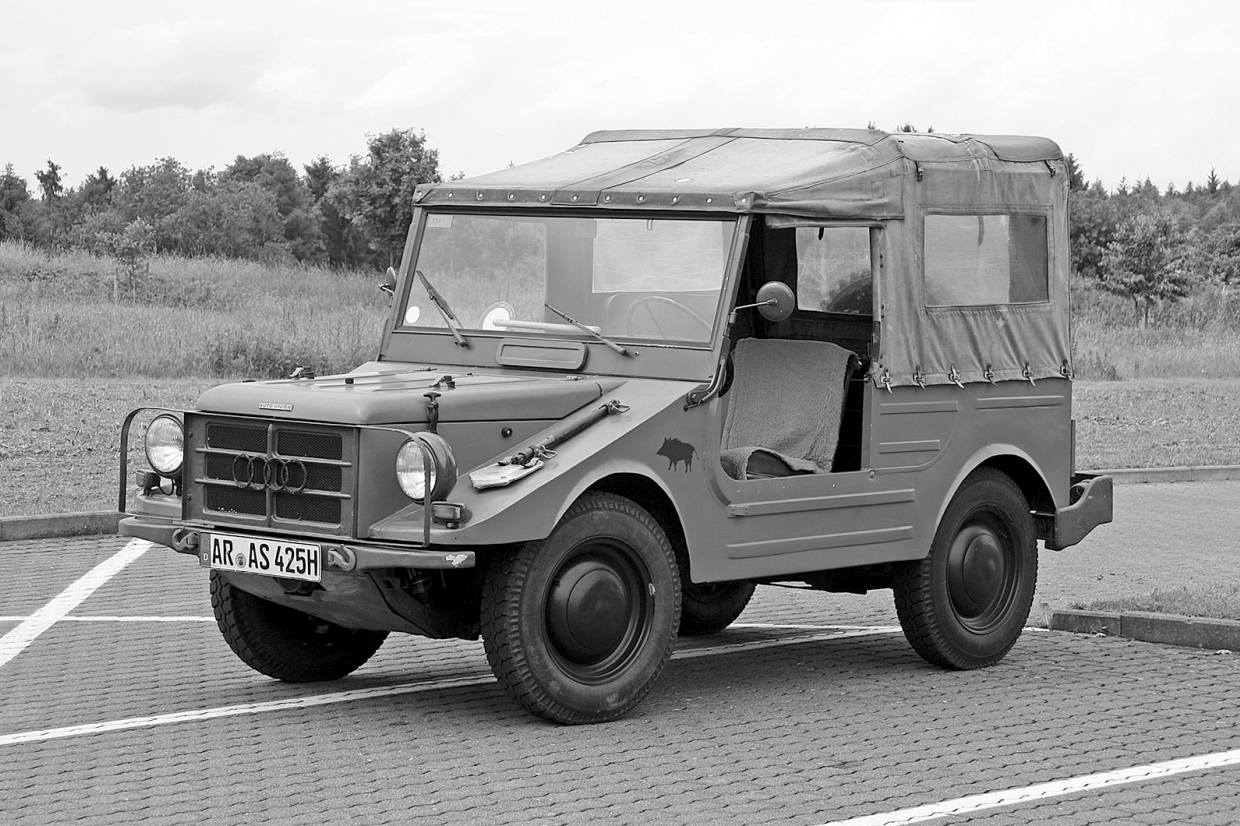 Auto Union’s answer to the Jeep, the DKW Munga was launched in 1956 and quickly found favour with the West German army, police and civilians after a rugged all-purpose vehicle.

It went out of production in 1968, but a decade later formed the basis of Volkswagen’s go-anywhere Iltis, whose 4x4 system would be adapted for the Audi quattro. 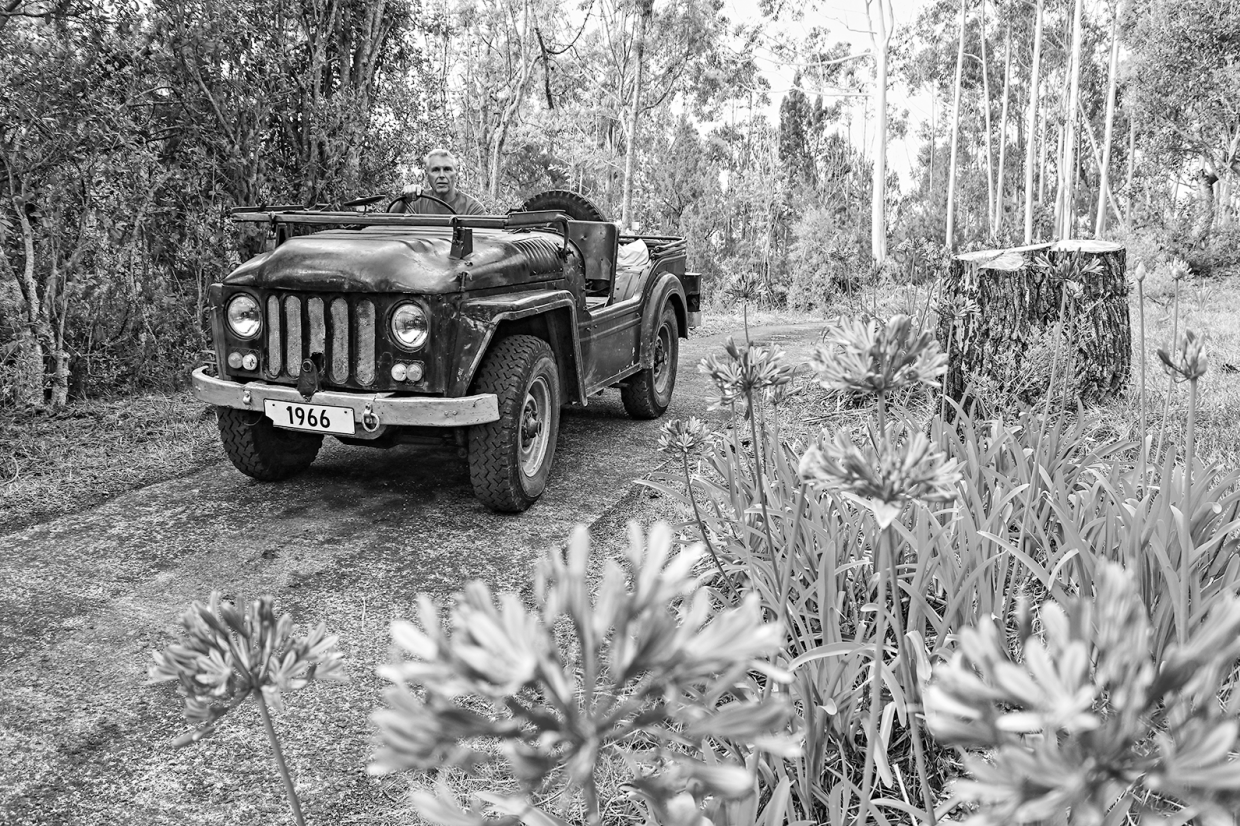 The Austin mostly saw military use, and had disappeared by the end of the 1950s

Mostly built for the British Army from 1951-’56, but with a few civilian exceptions, the Austin Champ was a cheerful-looking machine with plenty of power courtesy of the Rolls-Royce B-series engine.

Capable but expensive to build, it was phased out in favour of the more cost-effective Land-Rover-alike Austin Gipsy, launched in 1958. 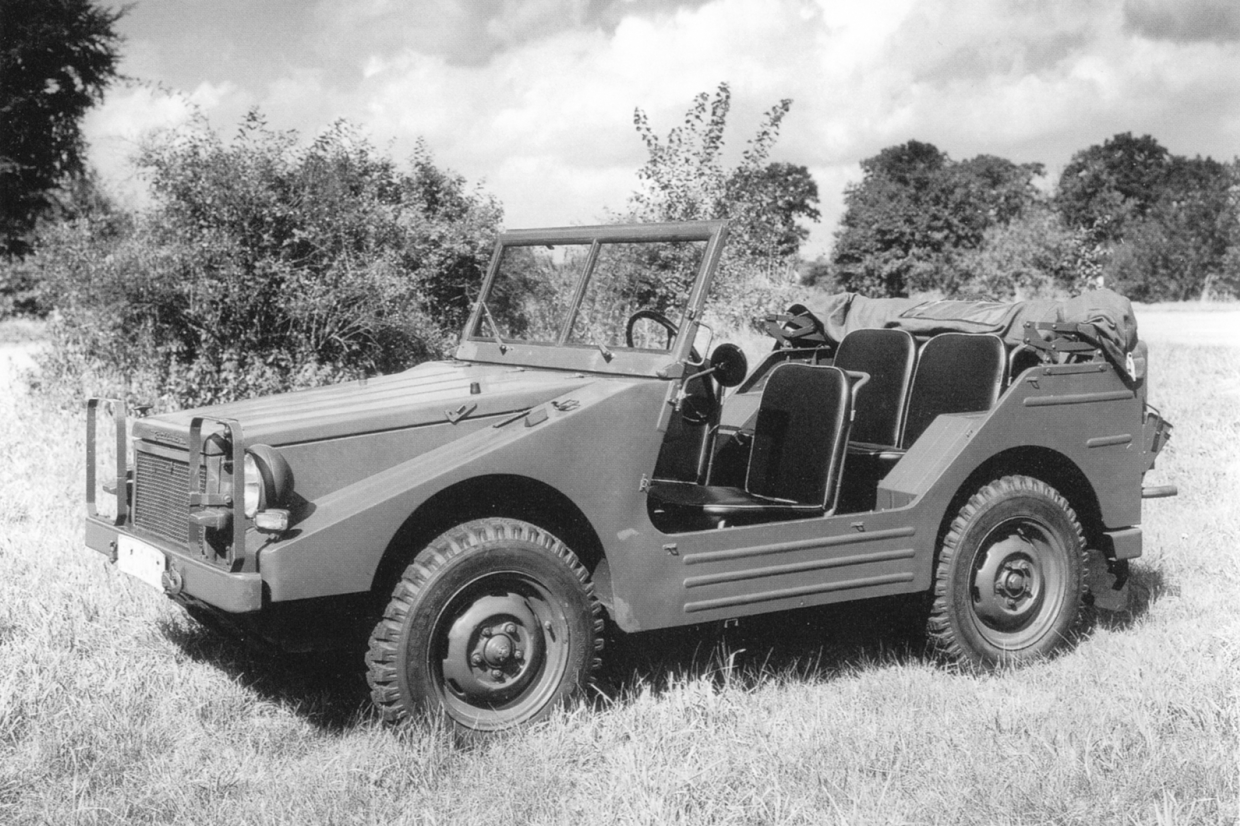 The Goliath had a fleeting lifespan of only three years

Competing alongside the Munga and Porsche’s short-lived 597 for a German military contract, the Goliath used a four-stroke 1093cc flat-four for the production Type 34 (in place of the two-stroke unit from the prototype Type 31).