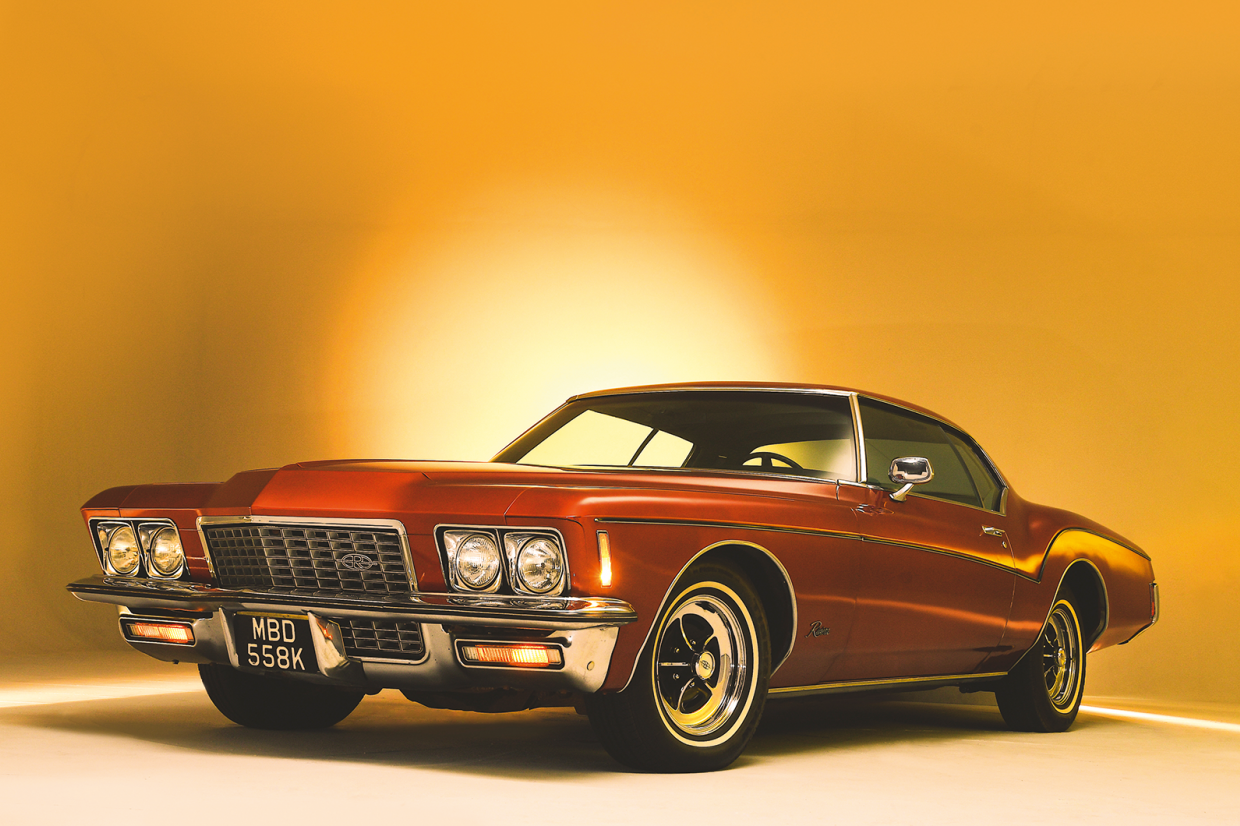 Some cars just end up tainted.

The 1963-’65 Buick Riviera is the darling of the American-car scene, and with good reason: its stunning shape, styled by Ned Nickles under legendary General Motors design supremo Bill Mitchell, is arguably the finest to emerge from Detroit since, well… ever.

Yet the 1971-’73 model that followed, the last of the truly bespoke Rivieras before the slide into bland GM badge engineering, sits in its shadow.

Too radical for buyers when it was new, this once-range-topping ‘Personal Luxury Car’ was swiftly relegated to the back row of the used-car lots.

That bargain-bin image can’t have been helped by its appearances on both the big and small screens. Where the ’65 even has its own critically acclaimed art-house movie dedicated to it, the 1971-’73 is invariably the transport for hoods, pimps and generally unsavoury characters, its fate more often than not the crusher after a violent pursuit with a fiery conclusion.

Its cinematic heyday was the 1990s, when a relic of the early ’70s was the perfect villain’s accessory – cheap to buy, with plenty of gangster chic.

Nicolas Cage’s bumbling hitman makes his escape in a ’71 in Red Rock West (1993); Kevin Kline drives another in dysfunctional drama The Ice Storm (1997); Bruce Willis blows up his ’71 in The Last Boy Scout (1991) – with the same car also appearing in Mel Gibson vehicle Lethal Weapon 3; and a ’72 outshines the future Mrs Tom Cruise in 1999’s drug-fuelled Go.

There are endless bad-boy cameos, too, but the 1971-’73 Riv achieved redemption, and its most famous role, in Canadian black comedy Due South (above), in which detective Raymond ‘Ray’ Vecchio (David Marciano) drives around Chicago in a ’72 that became as famous as the fish-out-of-water Royal Canadian Mounted Policeman Benton Fraser (Paul Gross).

Here, as in all of its celluloid appearances, the Buick spends most of its time lurching around on its soggy suspension in car chases, demonstrating the strength of its separate cruciform chassis with all manner of jumps and shunts. 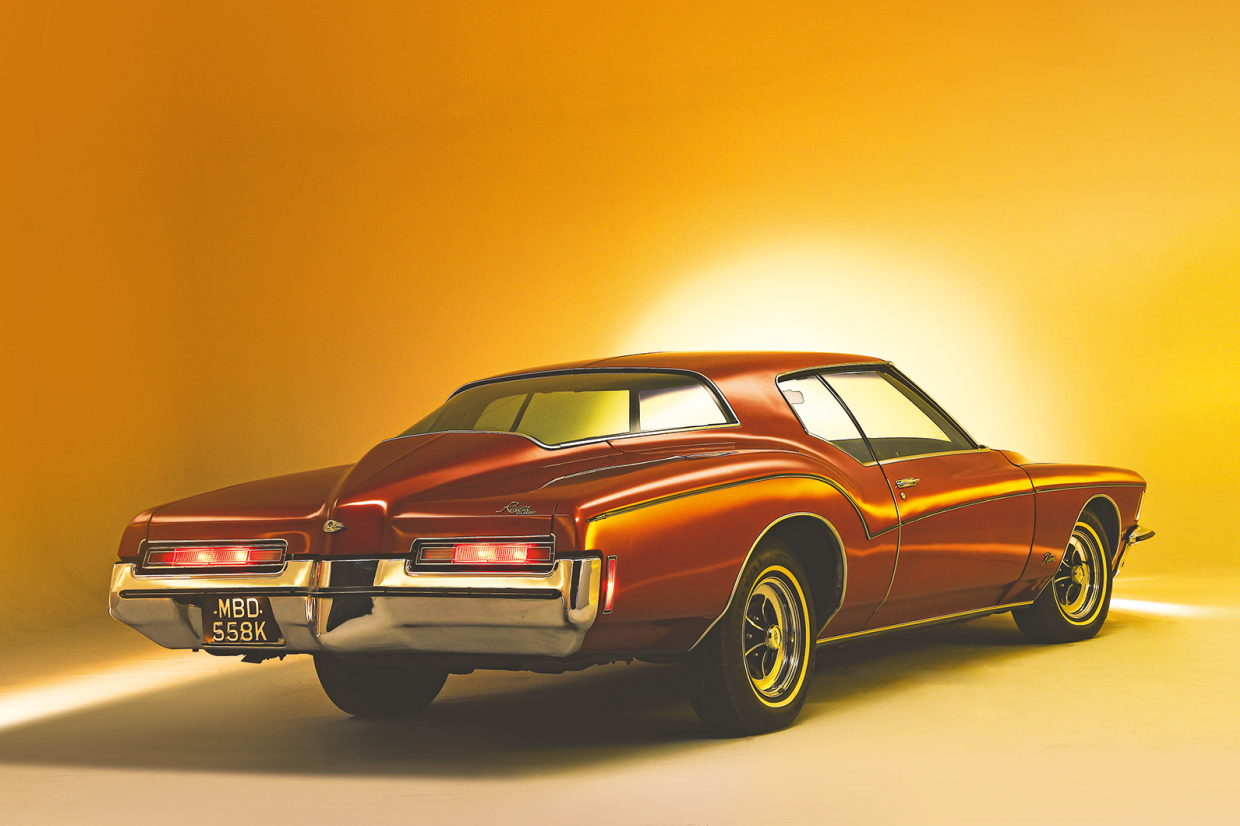 The Riviera’s elegant lines are enhanced by ‘Sweepspear’ trim

Although 1971 heralded only the third generation of the Riviera as a standalone model, the name – intended to conjure the glamour of the French and Italian coastline – had been applied to various Buicks for more than two decades.

Originating in the GM Styling experimental studio at 40 West Milwaukee, Detroit, it was used to denote a luxurious model with a distinctive ‘hardtop convertible’ style – the sporty look of a drop-top, but with a fixed roof – first appearing on the Roadmaster Riviera Hardtop Coupe at the GM Exhibition in New York in January 1949.

The key feature was the elimination of the central pillar to create, so the brochure claimed, ‘swift, greyhound lines that give sportive zip and zest’ – though this wouldn’t be carried over to four-door Riviera bodies until the 1955 model-year Century and Special.

In addition to the pillarless windows, another detail that would become synonymous with the Riviera body style – but one that, ironically, was absent from the original and most famous 1963 version – was the ‘Sweepspear’ chromed side trim, with its distinctive kick over the rear fender. This would make a dramatic return as a signature feature of the 1971-’73 cars, before disappearing never to be seen again. 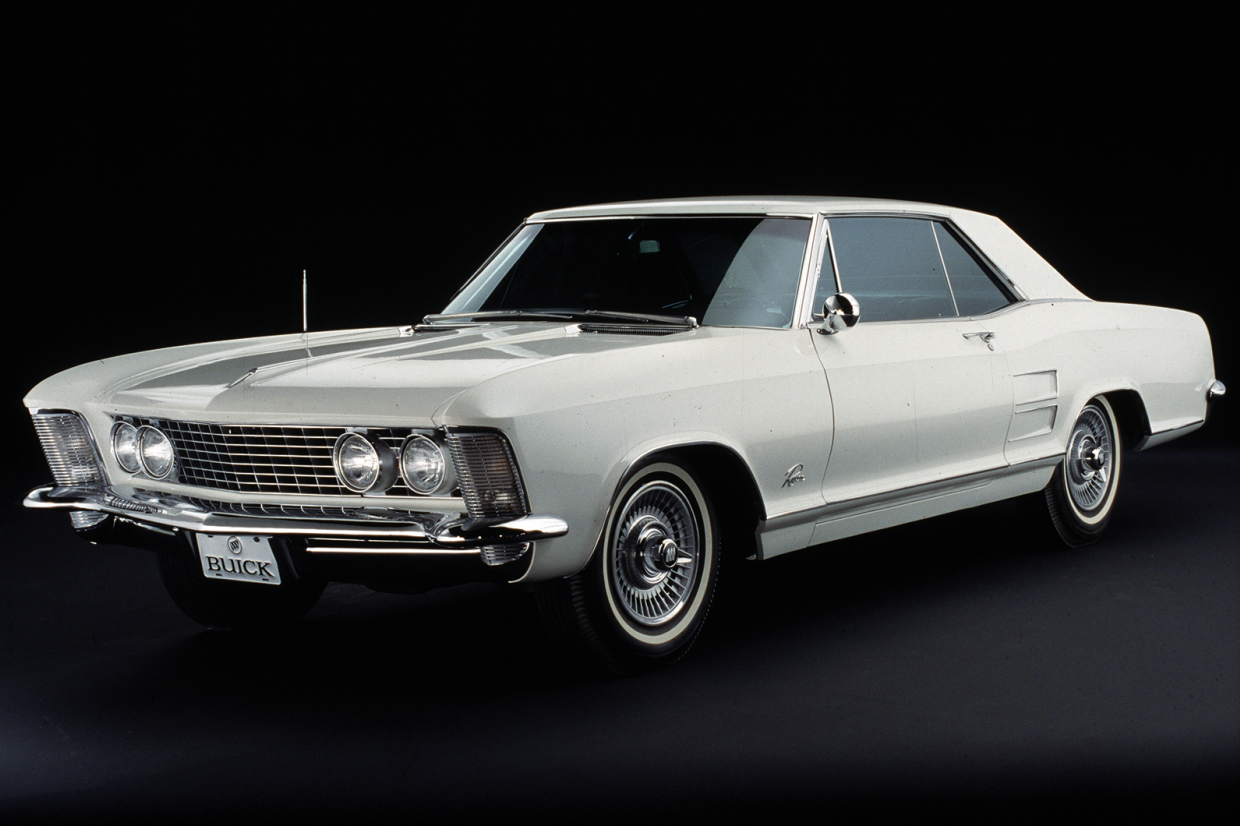 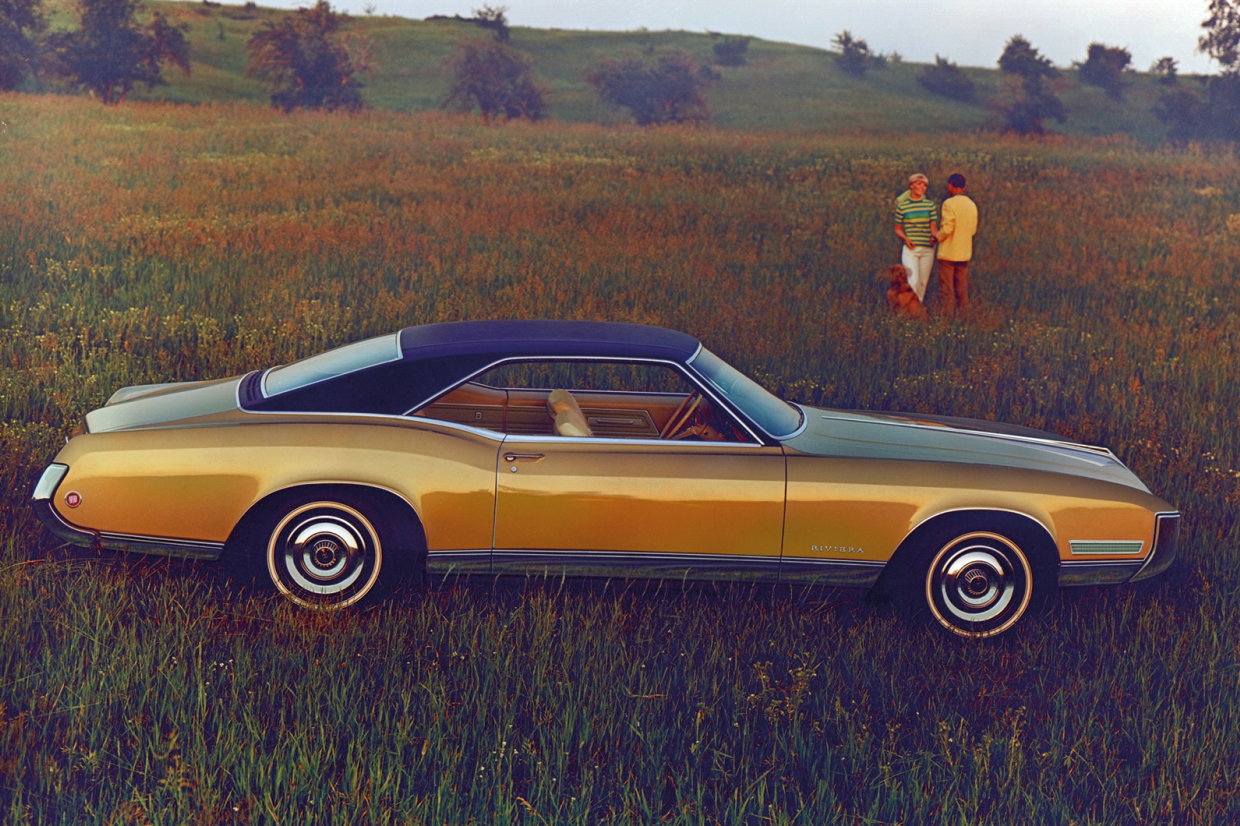 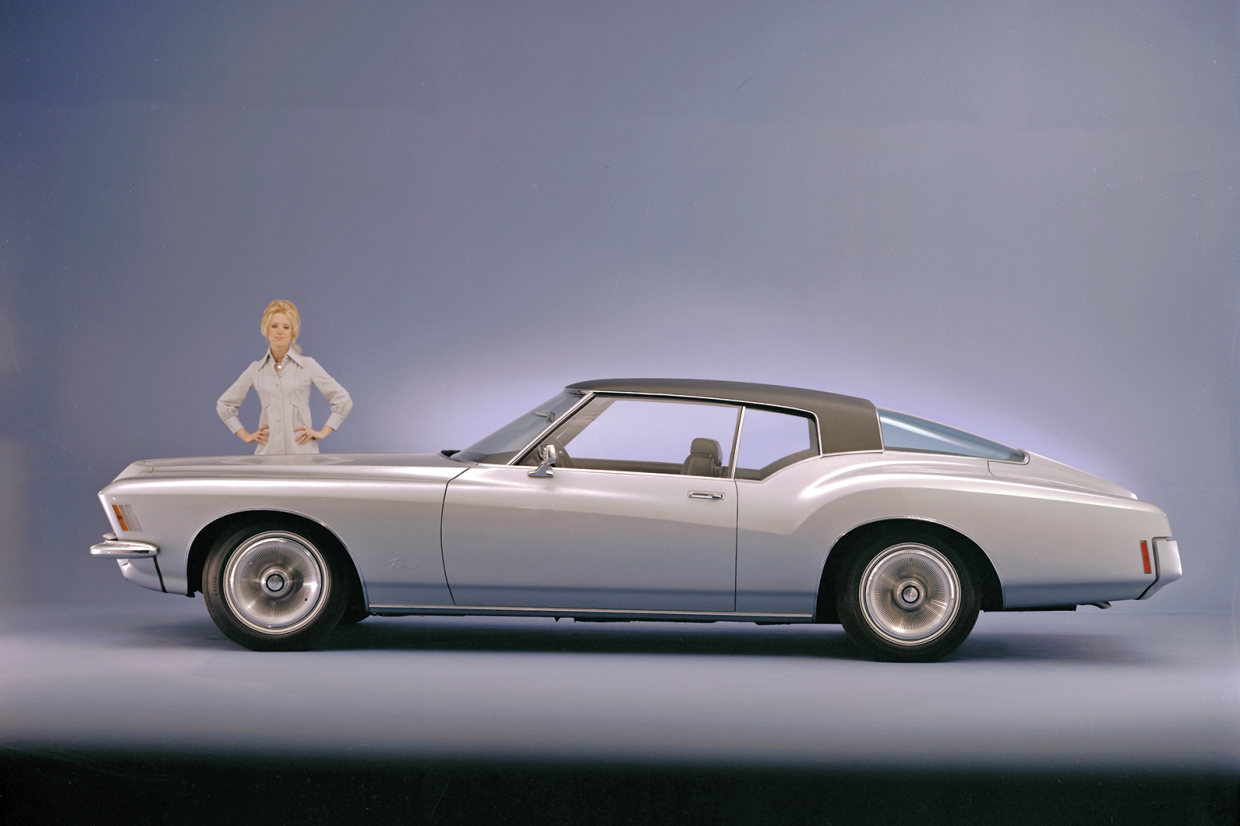 The 1963 Riviera nearly wasn’t a Buick at all, having initially been developed for Cadillac to be badged as the LaSalle II.

Project XP-715 – which was to remain remarkably similar to the production model – was rejected by Cadillac, however, and immediately snapped up by energetic Buick boss Edward D Rollert as the perfect rival for the Ford Thunderbird.

Its combination of clean, crisp lines and high performance were reportedly the result of Mitchell’s request for a car that blended the very best from Ferrari and Rolls-Royce… hardly the simplest of briefs.

Three years on, the Riviera was reborn and the 1966-’70 model remains an undeniably elegant machine, but it lost the original’s ability to stop pedestrians in their tracks and have car-mad kids peering into dealership windows before unleashing pester power on their parents.

That would return with a bang for the 1971 season, with one of Buick’s most controversial production models. The new Riviera was bold in the extreme, with a cliff-face of a nose fronted by huge moulded bumpers, and a tapering ‘boat-tail’ conjuring images of the greatest excesses from ’30s US car design, such as the iconic Auburn Speedster. 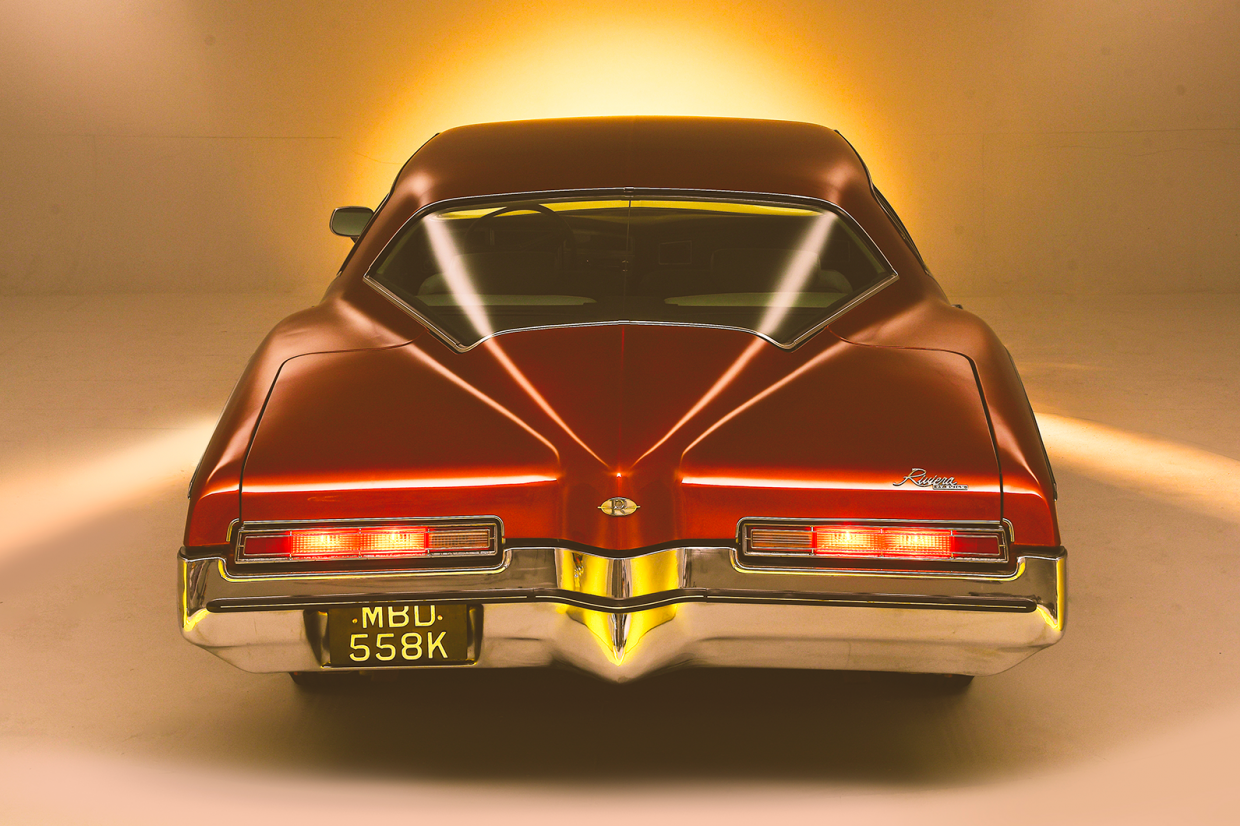 Inevitably with such a dramatic creation, the ’71 restyle owed its greatest debt to Bill Mitchell. Unlike the first-generation car, this design was to be a Buick from the start. It wasn’t, however, meant to be as big as it became – measuring a faintly ridiculous 218in from stem to stern, and a fraction less than 80in wide.

The initial plan was to build the third-generation version on the more compact GM ‘A-body’ platform, but cost constraints required that the stylists fit their shape to the significantly larger ‘B-body’ of the LeSabre. As Mitchell later explained: “It got so wide, a speedboat became a tugboat.”

The influence of the famous design boss is clear to see in the Corvette Sting Ray-style fastback, but instead of that car’s split screen the Riviera features a butt-jointed rear glass with a stress line down the centre.

And while Mitchell would be the face of the new design, the legwork was done by Jerry Hirshberg. A GM alumnus since 1964, and later chief designer of Buick Studio 2, he was tasked with turning his boss’ ideas into a roadgoing reality.

“The car looked slightly eccentric,” Hirshberg later admitted to Automobile Quarterly, “but so would a Corvette if it were the size of a Cadillac. I have taken a gentle ribbing around the office about it, but the car did have aspects I like myself. Mitchell wanted a classic. And to Bill’s credit, he liked a little controversy.” 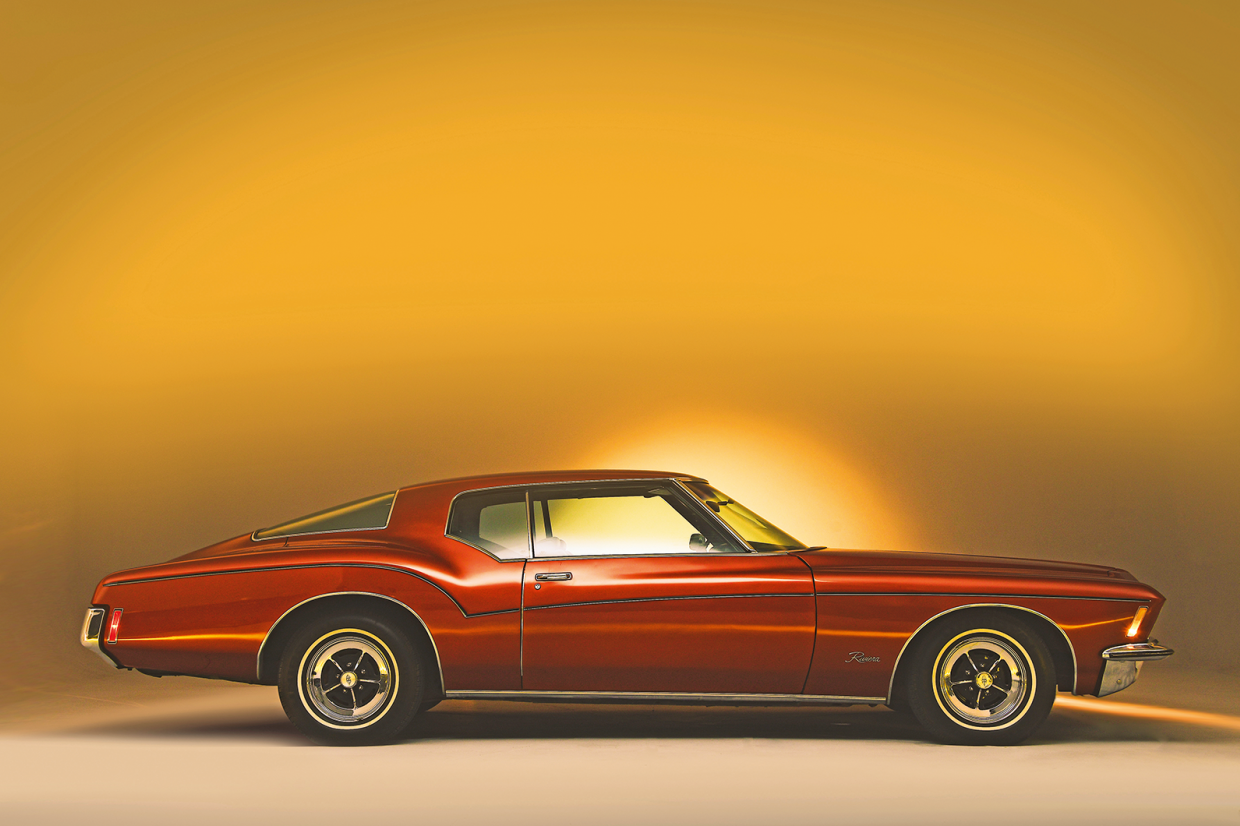 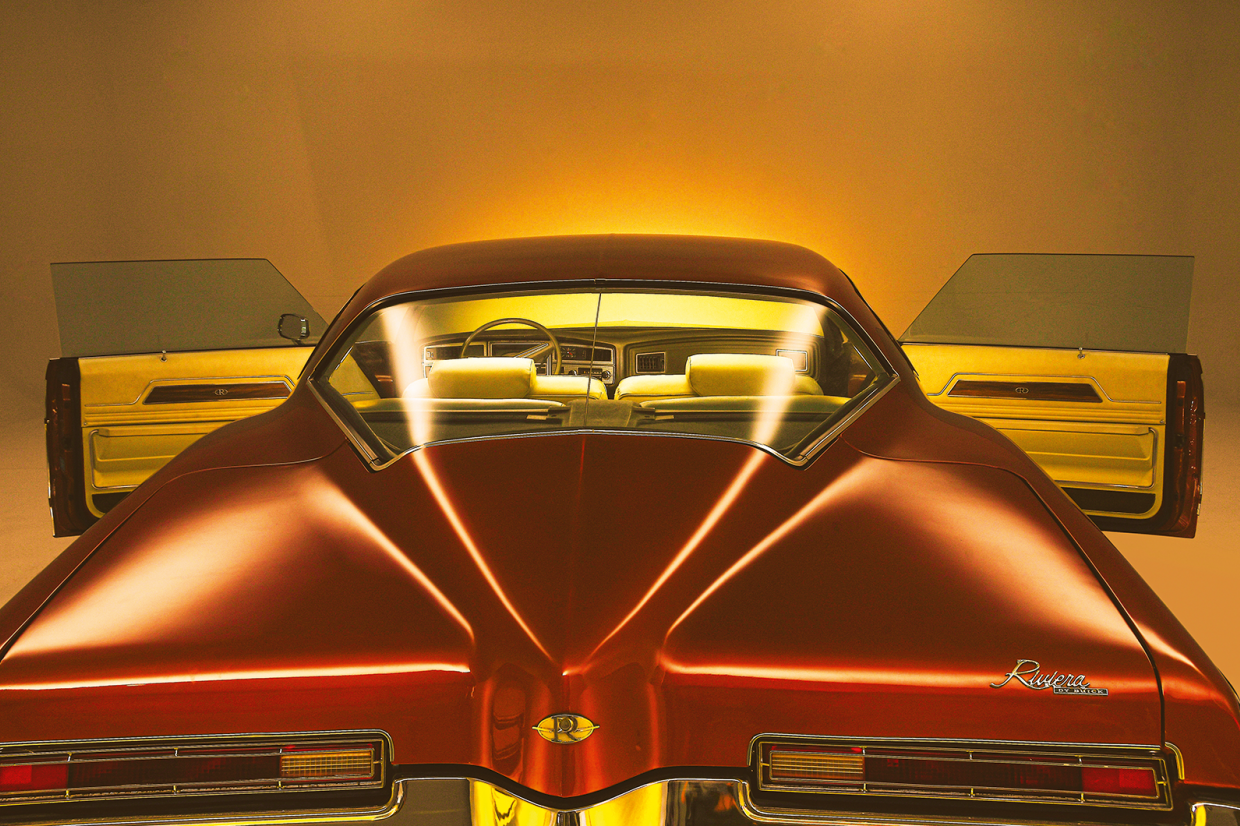 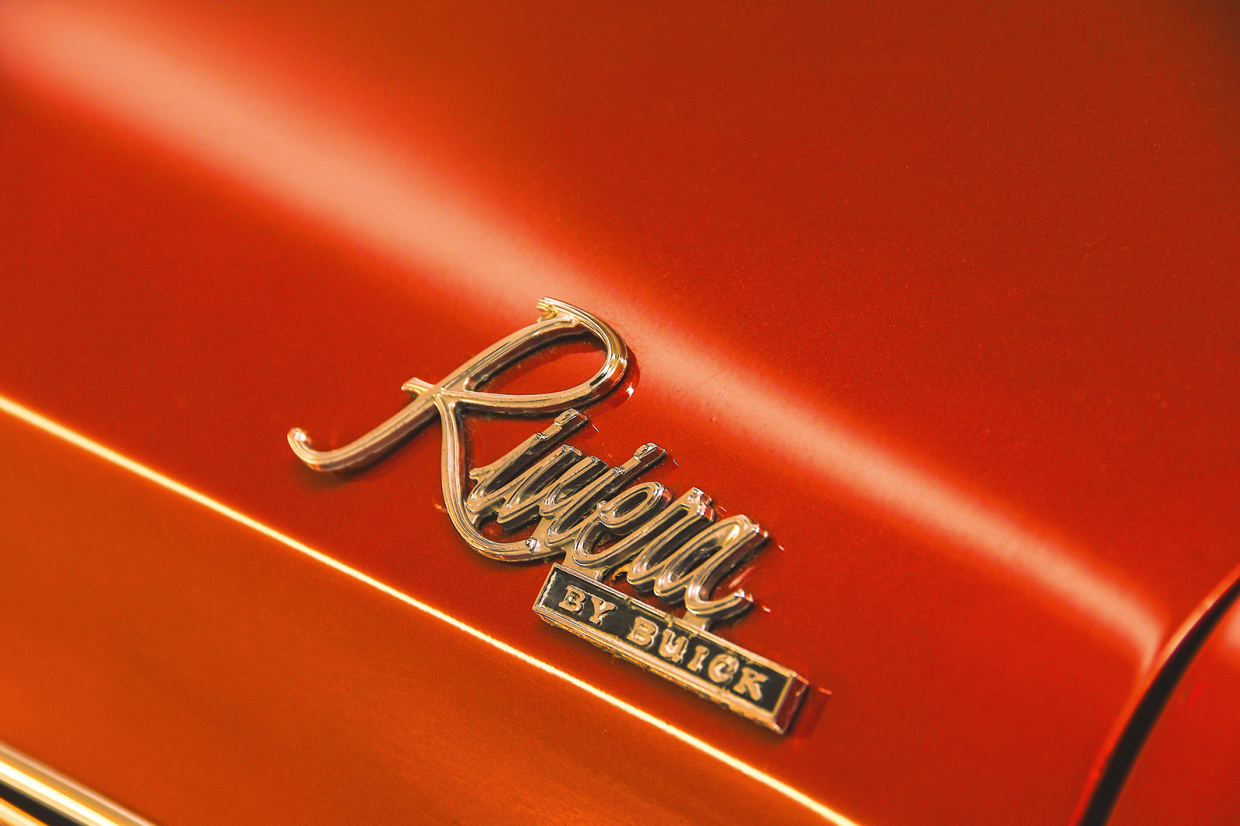 It’s a design that has aged well, in particular the tapering tail and extravagantly pinched waist, further accentuated by its reinterpretation of the ‘Sweepspear’ trim.

At the time, however, it was divisive to say the least. Buick’s press release called it ‘The most daring new car design in recent history’, but in private incoming general manager Lee Mays reputedly hated the car, and was the driving force behind the shape being toned down significantly for 1973.

He had a point, because the buying public was far from bowled over. Riviera sales for 1971 hit a new low at 33,810, and that despite plenty of positive press – in particular for its tidy cornering behaviour courtesy of revised ‘AccuDrive’ double-wishbone front suspension.

‘The Riviera is now a handling jewel, without losing too many of its former characteristics on the straight,’ proclaimed Road Test magazine. ‘There is much about the new Riviera that will now appeal to the enthusiast.’

Here, though, as in other publications, there was consternation about that pointy tail: ‘Riviera owners would be well advised to be aware of the lethal weapon in their hands.’ 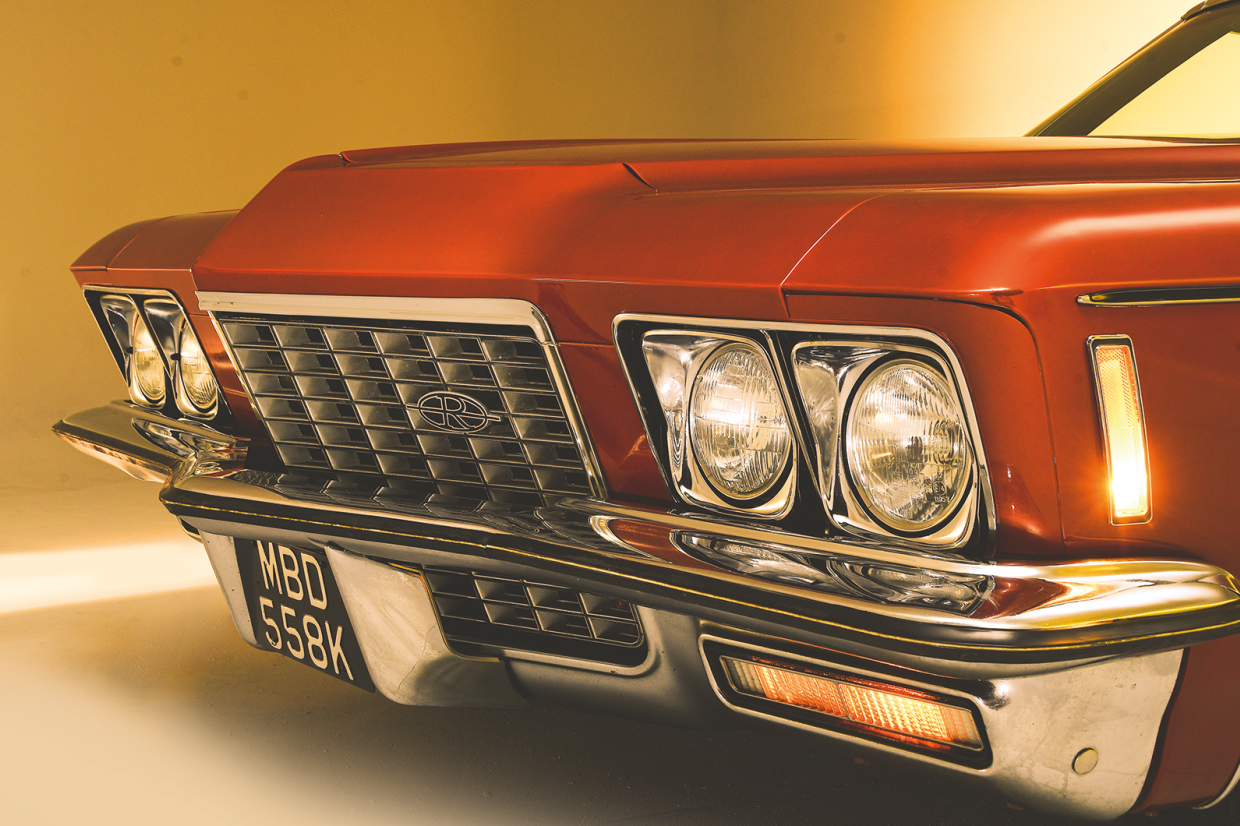 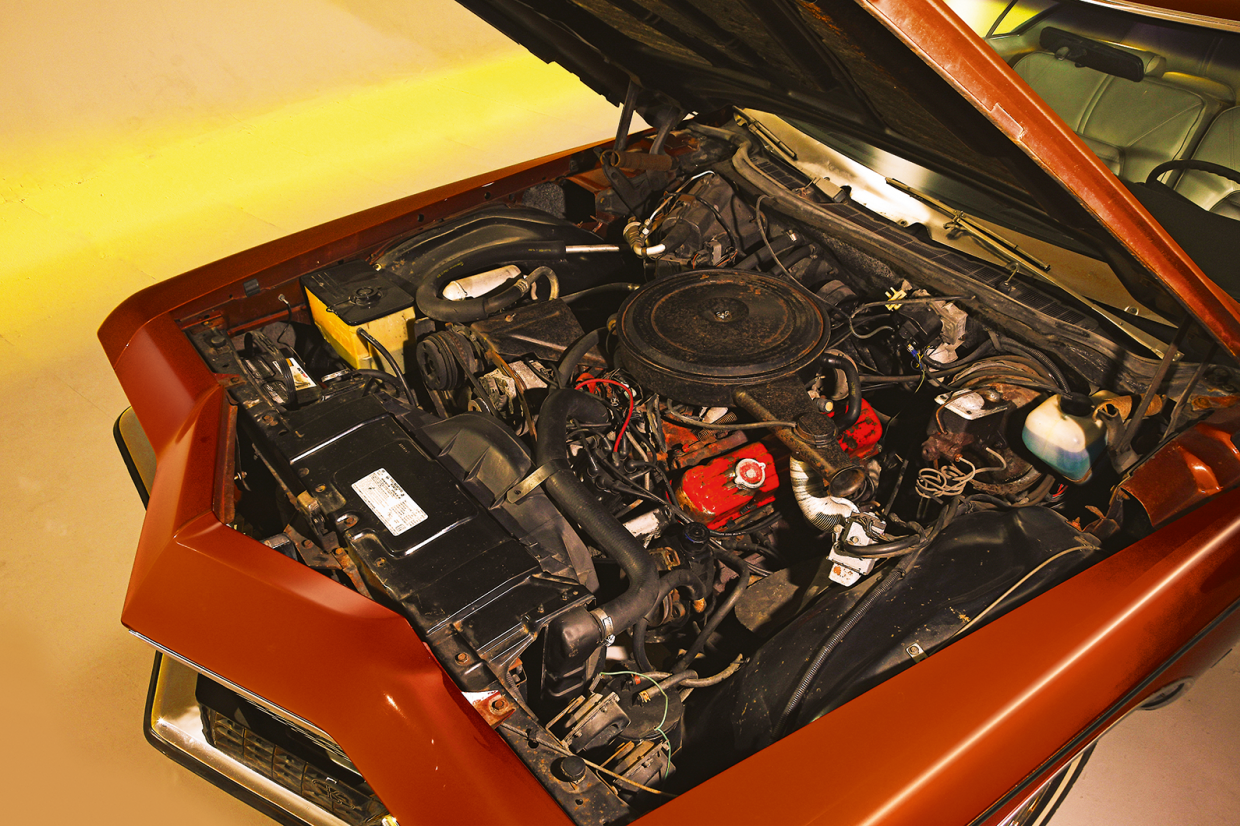 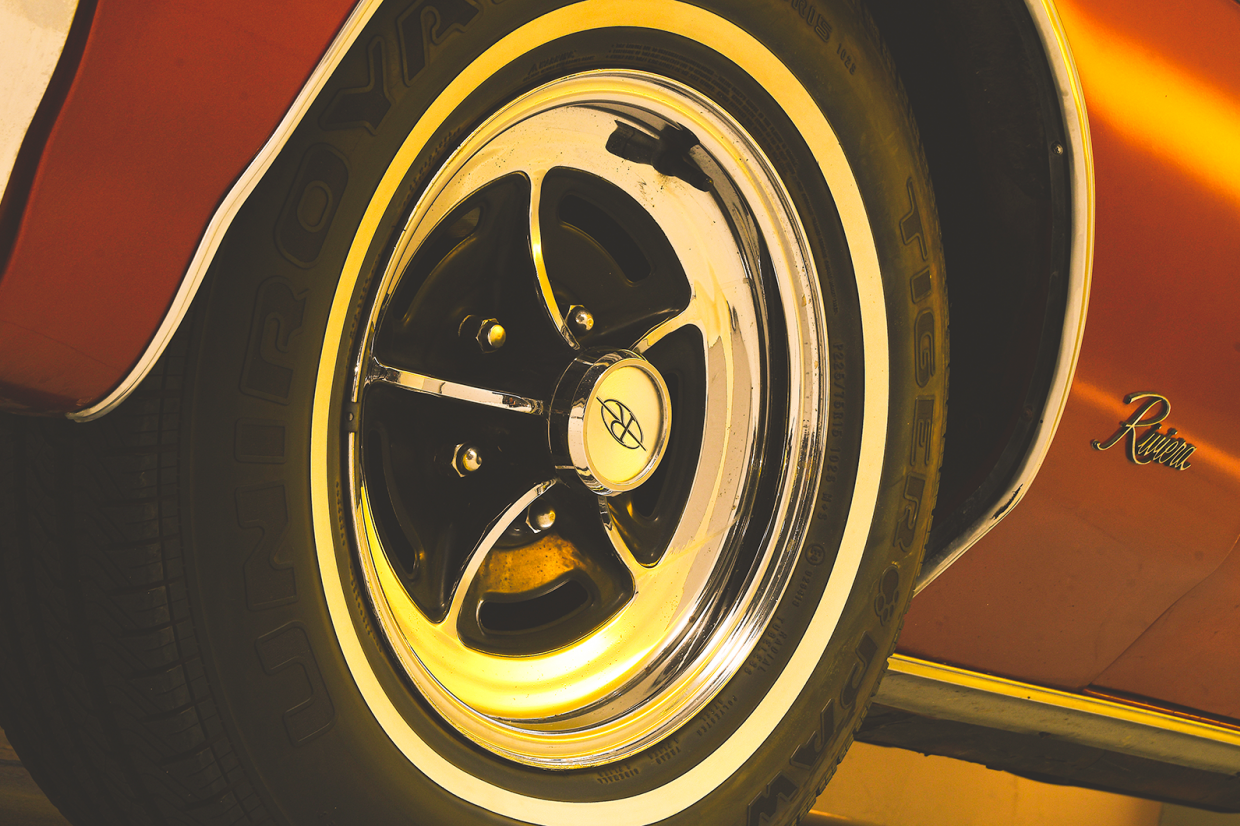 As befits a model that would continue to act as the flagship of the Buick range, the Riviera could boast an impressive specification. And although it still sat on an all-steel separate chassis, there was innovation to be found, too, not least in the optional MaxTrac system developed by GM’s in-house AC Spark Plug Division.

Essentially the forerunner to today’s traction control, it used a small computer and two sensors – one on the speedometer drive and the other on the front brake – to detect differences in speed between the front and rear wheels and regulate wheelspin. Clever stuff for 1972, as was the ‘Full-Flo’ ventilation that drew in fresh air and spat out the stale through louvres in the rear deck.

‘Our’ Riviera is a ’72, so does without those vents – which could on occasion suck exhaust fumes back into the car – and features a bold eggcrate grille, along with rubber inserts for the bumpers.

It’s testament to the fundamental success of the design that those were the only tweaks at a time when wholesale year-on-year changes were common, though under the skin there was a 5bhp drop in power courtesy of a lower compression ratio and the introduction of exhaust-gas recirculation – a taste of what was to come with tighter Federal emissions controls.

Not that there is anything remotely ‘green’ about a ’72 Riviera. Both the standard car, as here, and the 10bhp lustier Gran Sport featured a whopping 455cu in (7.5-litre) V8, introduced in ’67 to replace the aged ‘Nailhead’ unit, mated to a three-speed Turbo Hydramatic 400 ’box. 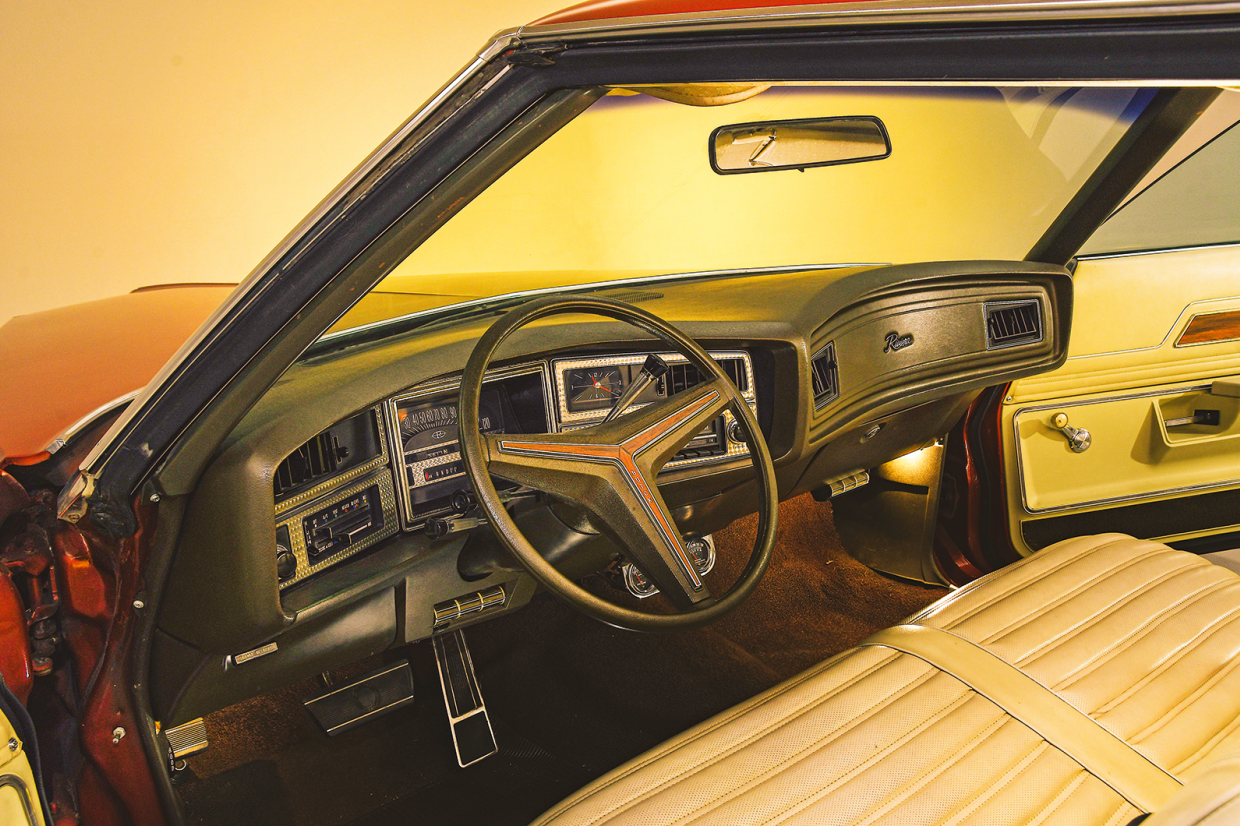 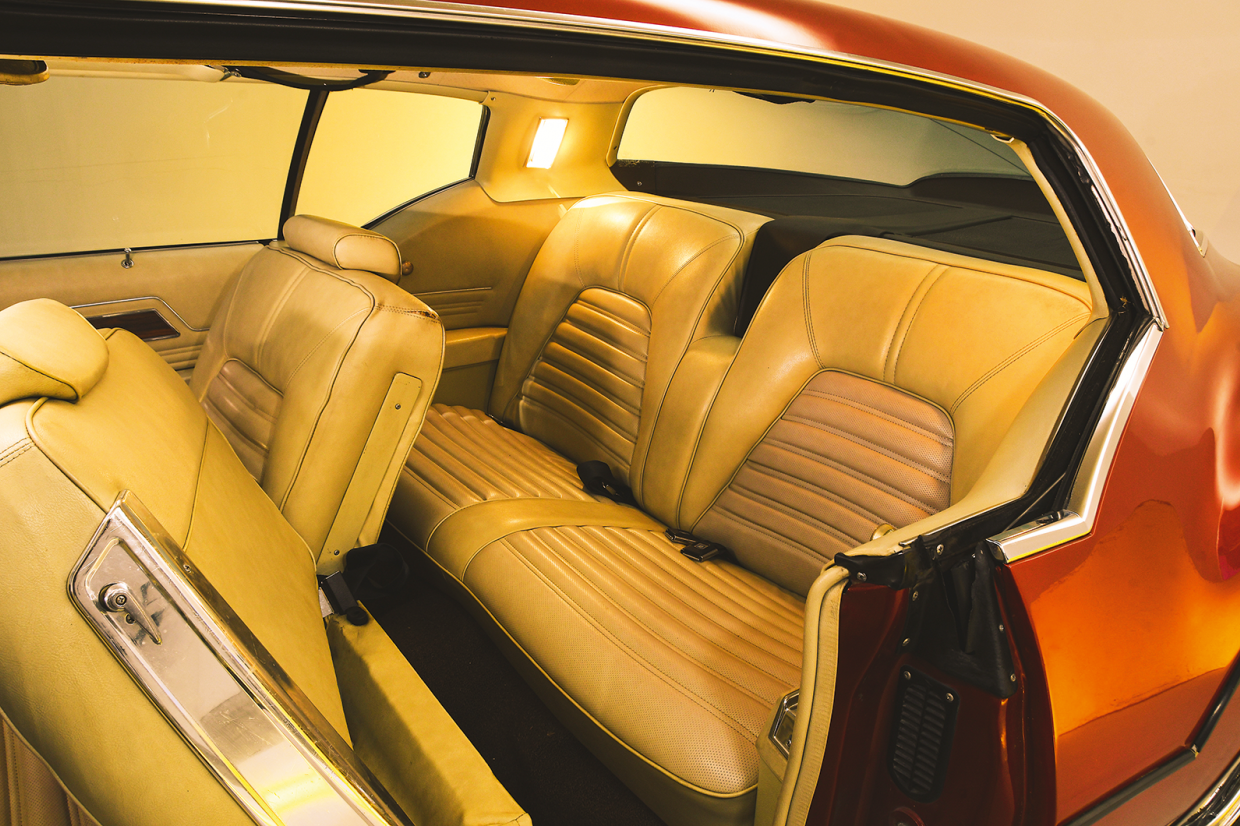 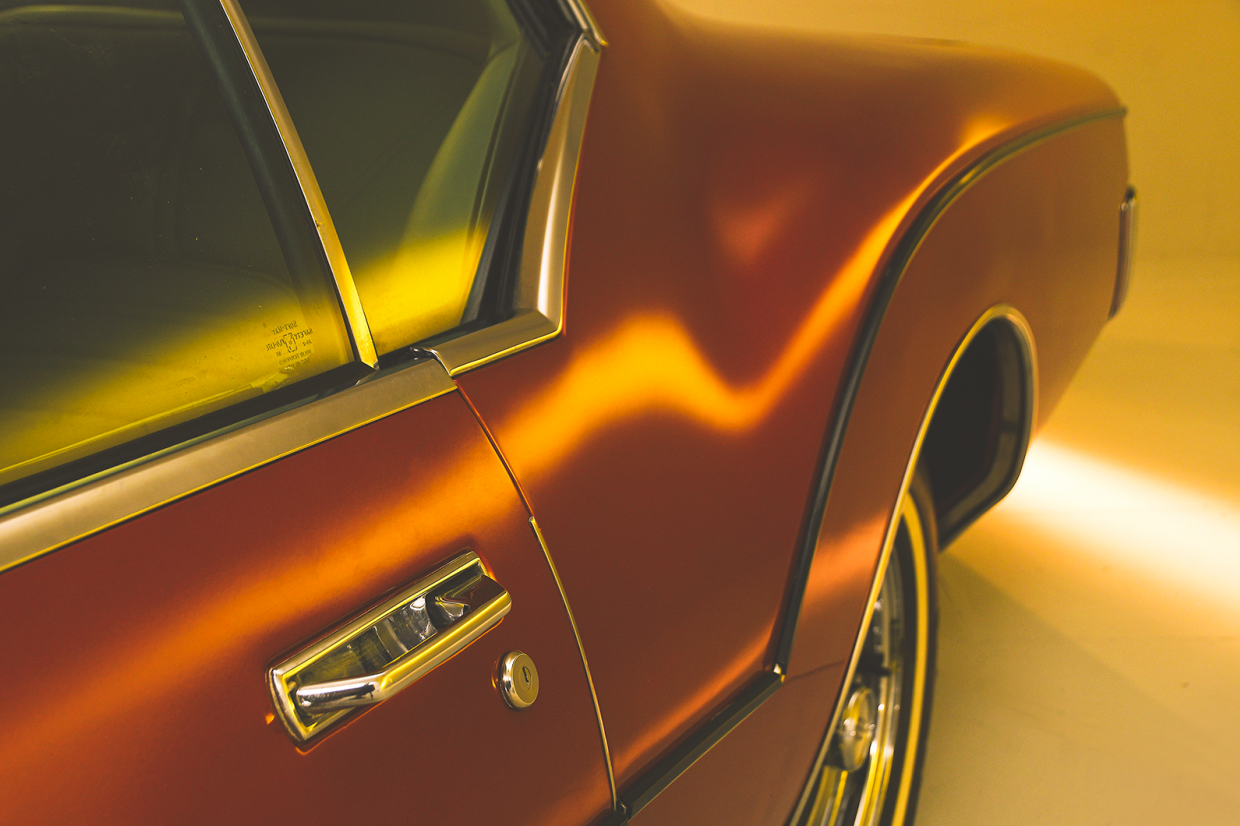 To drive it’s pretty much as you would expect: soft and shimmying, with a ride that batters road bumps into submission as effectively as a hydro-pneumatic Citroën, and feel-free power-assisted steering that’s sharper than you expect, with fewer than three turns from lock to lock.

For all its perceived sportiness in the American automotive press, the joy of the Riviera is cruising, all four windows down, with an elbow on the sill and a finger keeping the super-light steering in check. The huge, electrically operated and vinyl-covered bench easily seats three, and there’s little doubt from within that this was once an expensive machine.

The engine-turned facings for the dashboard – which reflects the exterior with a pronounced vee – has controls for the (optional) split-level air-con, plus there’s cruise control and an integrated radio. It’s a car that perfectly encapsulates the ‘personal luxury’ concept and imparts a satisfying sense of well-being, the muted rumble of the V8 just distant enough to forget how much fuel it’s drinking. 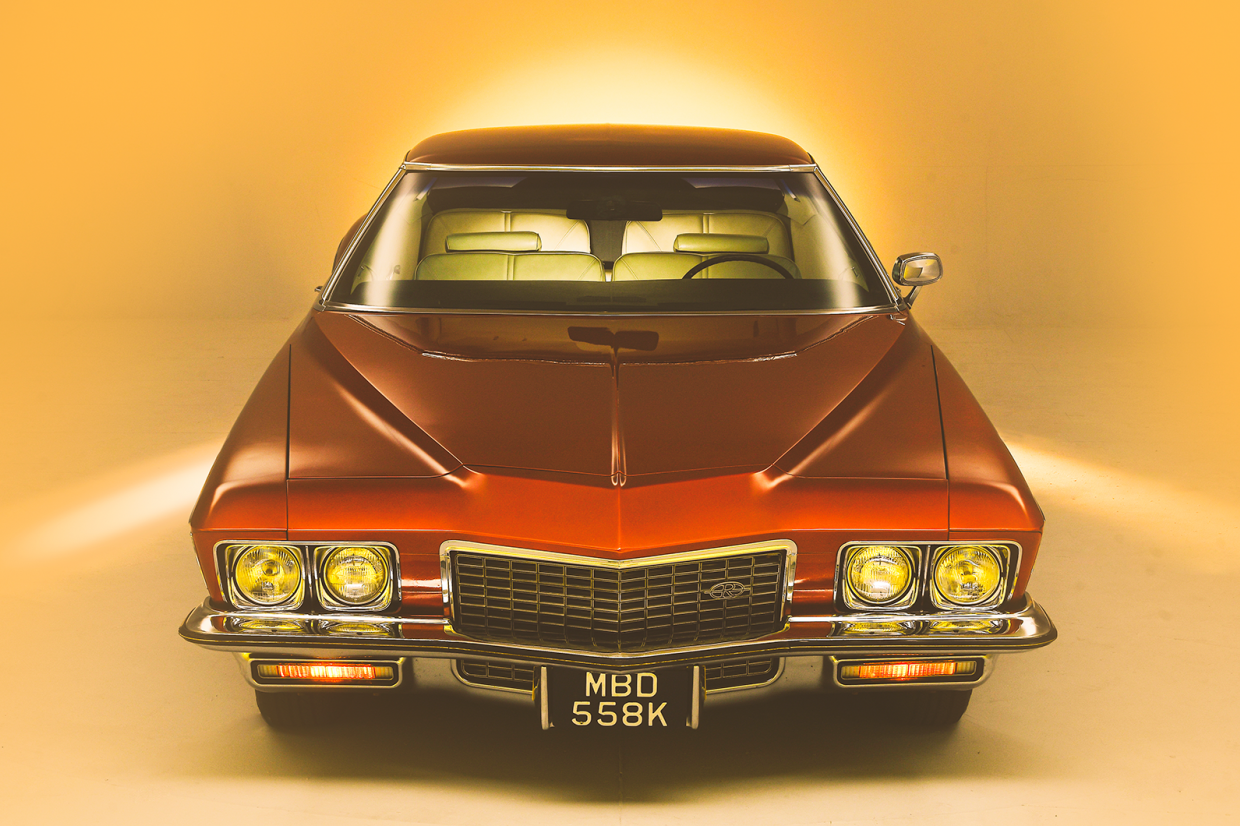 After 1973, and in particular following the 1977 downsizing, the Riviera name was progressively diluted and increasingly indistinguishable from lowlier Buick models, finally petering out in ’99 after more than a million had been built.

There have been attempts to revive it with a pair of gullwing-doored concept cars – revealed at the Shanghai Motor Show in 2007 and 2013 – but in a world where the Buick brand stands for rebadged Vauxhall/Opel models, and the kind of design bravery that singled out the early Rivieras is generally discouraged, it seems destined to remain a name from the past.

No wonder, then, that interest in the original cars is climbing. This by no means concours example – brought to the UK from its birthplace in Flint, Michigan, in 2013 and recently emerged from a private collection – was sold by Historics in July for a shade over £16,000.

Perhaps the underappreciated boat-tail is finally joining its illustrious predecessor, making a style statement in its own right rather than simply being a car for crooks and crooked cops to smash up in Hollywood blockbusters. About time, too.

Haunting images of cars caught in the California wildfires