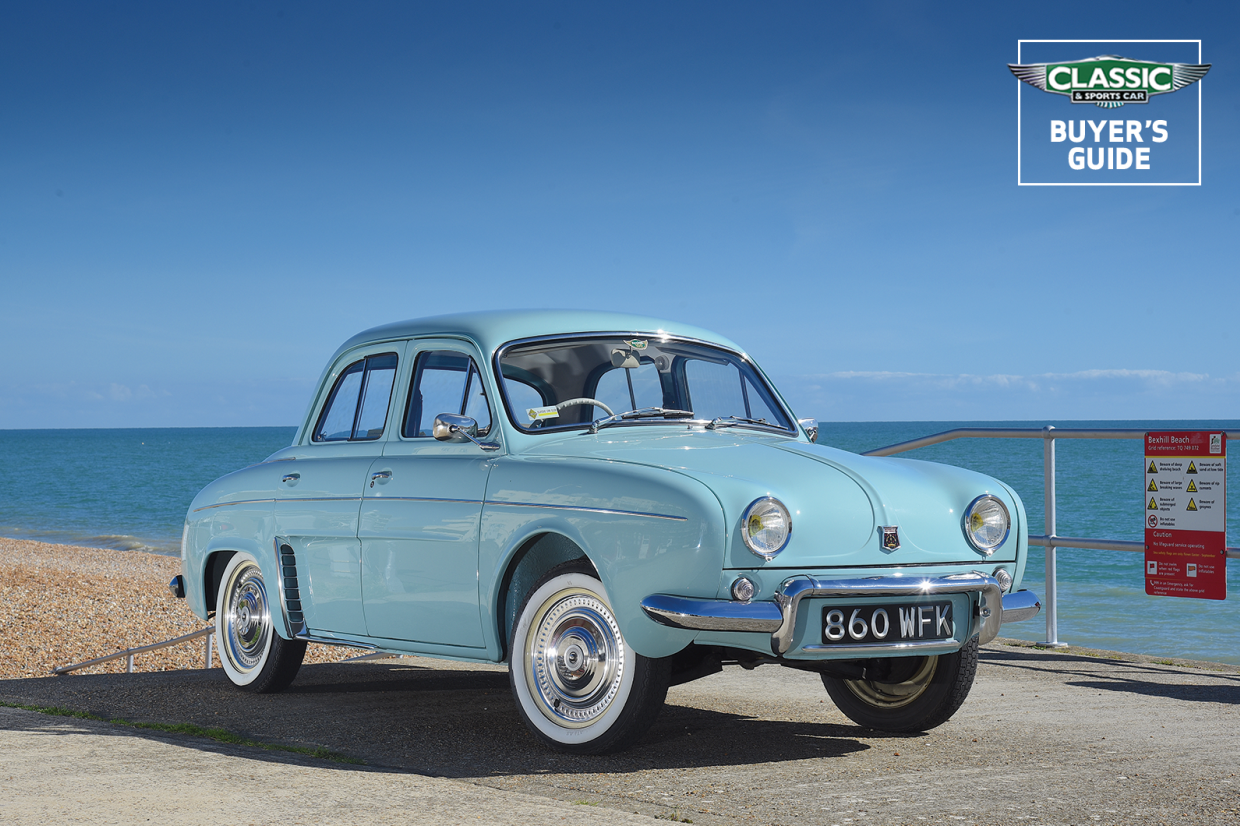 Why you’d want a Renault Dauphine

Pretty to look at and entertaining to drive, the Dauphine was a great global success for Renault. It catered for customers who could afford to spend just a little extra to get a car more ‘special’ than the base-model 4CV, and later Renault 4.

The tight turning circle, fuel economy, surprisingly spacious four-door interior and large front boot also made Dauphines ideal for use as taxicabs – and an Uber-style launch in London led some black-cab drivers to ram them when they saw them!

Lightweight construction was one of the Dauphine’s secrets, giving it great performance for its size and power – but the very thin steel (22/23-gauge on non-structural panels) rusted through in a few years – or less in severe environments.

Poor-quality steel, even more rot-prone than normal, afflicted 1959-’63 models; Dauphine survival numbers are low because of rust extermination and it should be top of your list of things to check when buying. Ask yourself: is rot present, has it been hidden and, if repaired, has it been done safely and correctly? 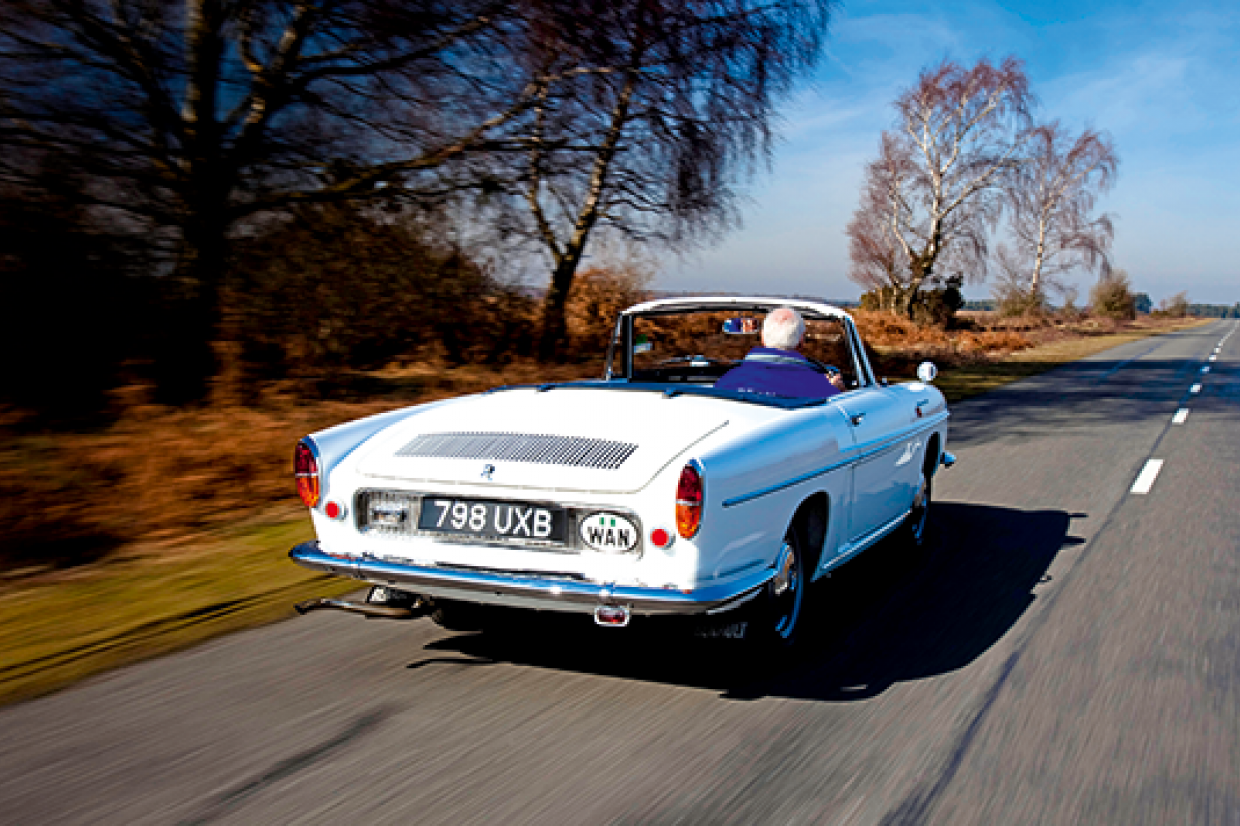 Renault’s later Floride was based on the Dauphine

Built in the world’s most highly automated car factory of the late 1950s, turning out more than 200,000 examples a year, the Dauphine’s advanced features included an automatic choke, steering-column lock ignition/starter, childproof door locks from 1961 and, on Gordini/Export models from ’64, all-disc brakes.

From the start, tuning parts were offered by Renault through the Gordini brand, to boost power and offer four-speed or even five-speed gearsets that fitted in the standard three-speed housing – although the tuned engine made the handling distinctly tail-happy.

Dauphines were assembled worldwide, including in Acton, London, but poor quality control contributed to the end of assembly there in 1961. Elsewhere production continued for longer, especially in Argentina where it remained into the 1970s; some current parts supply, especially panels, emanates from Argentina.

Meanwhile, Renault developed the stylish rear-engined theme with the Floride and Caravelle coupé and convertible, both of which were based on the Dauphine; while even more desirable, they are unfortunately equally rust-prone.

Renault Dauphine: what to look for 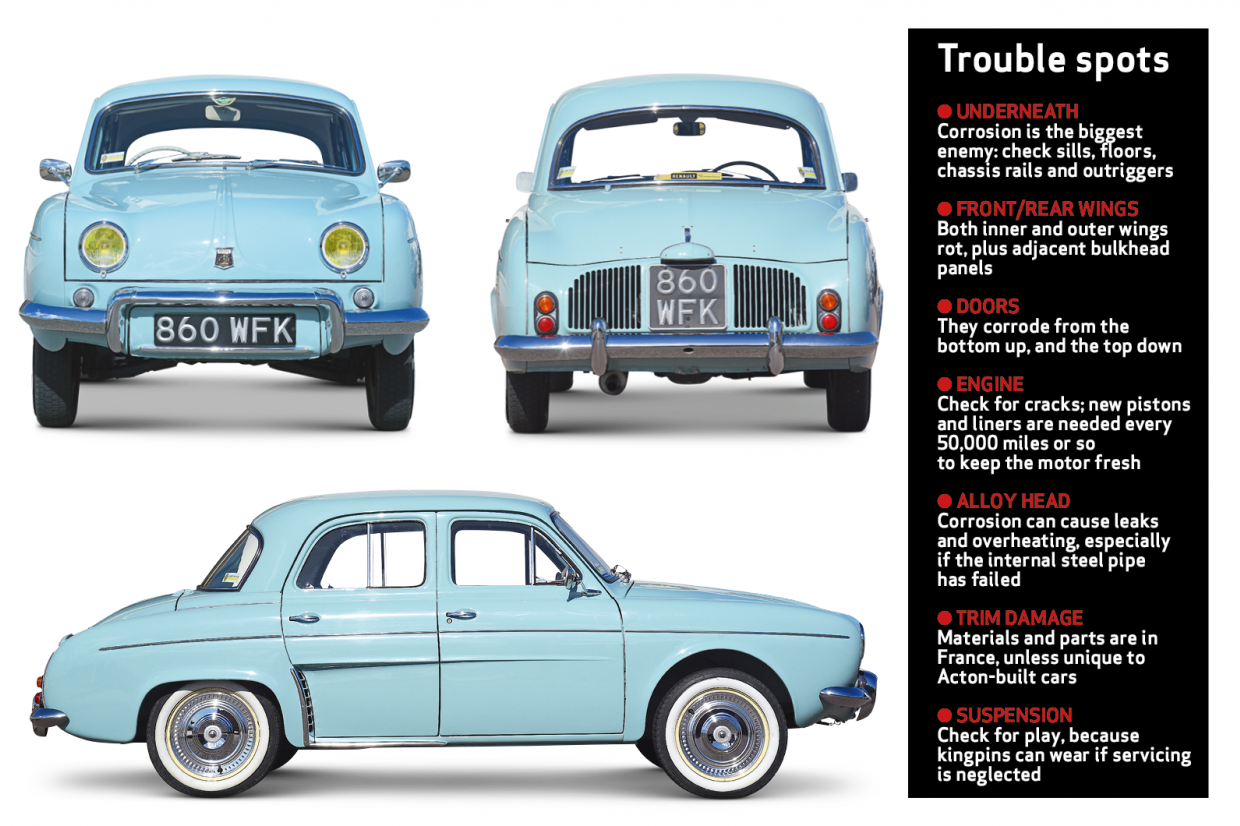 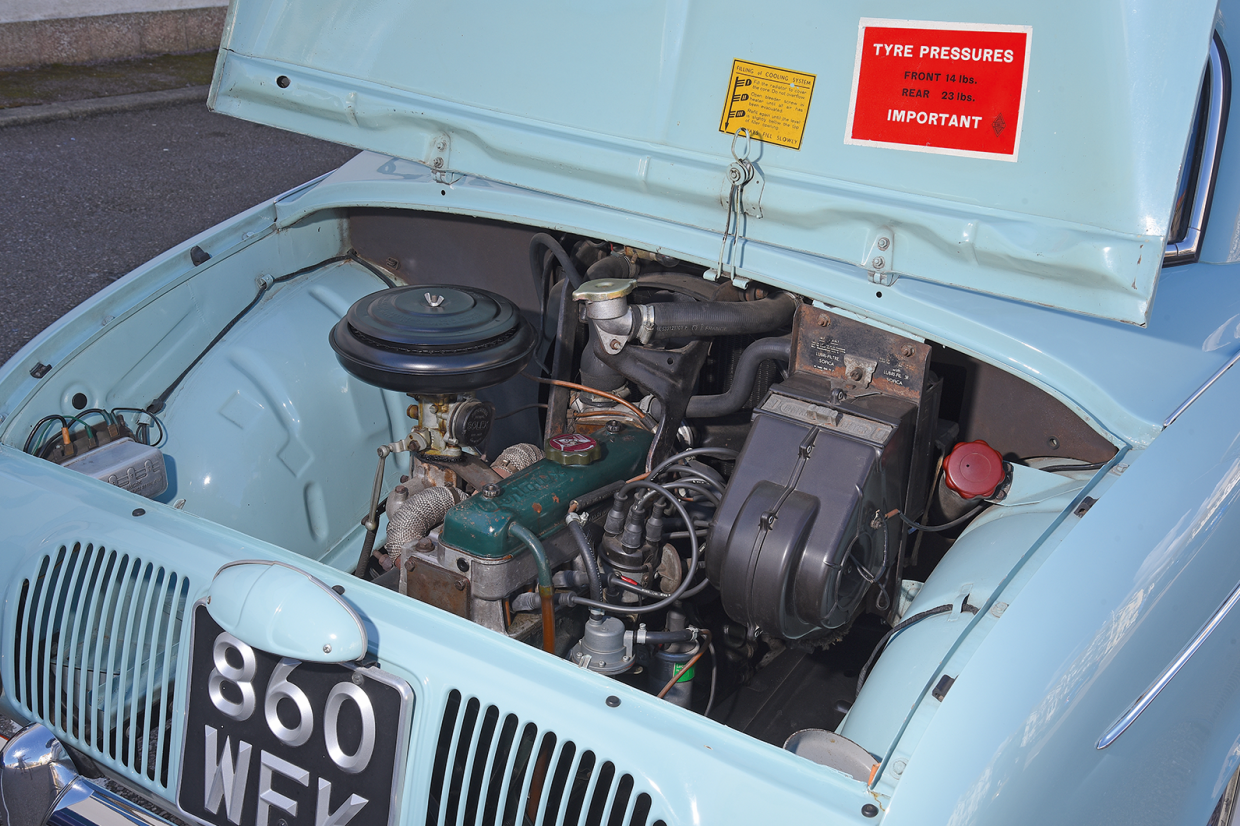 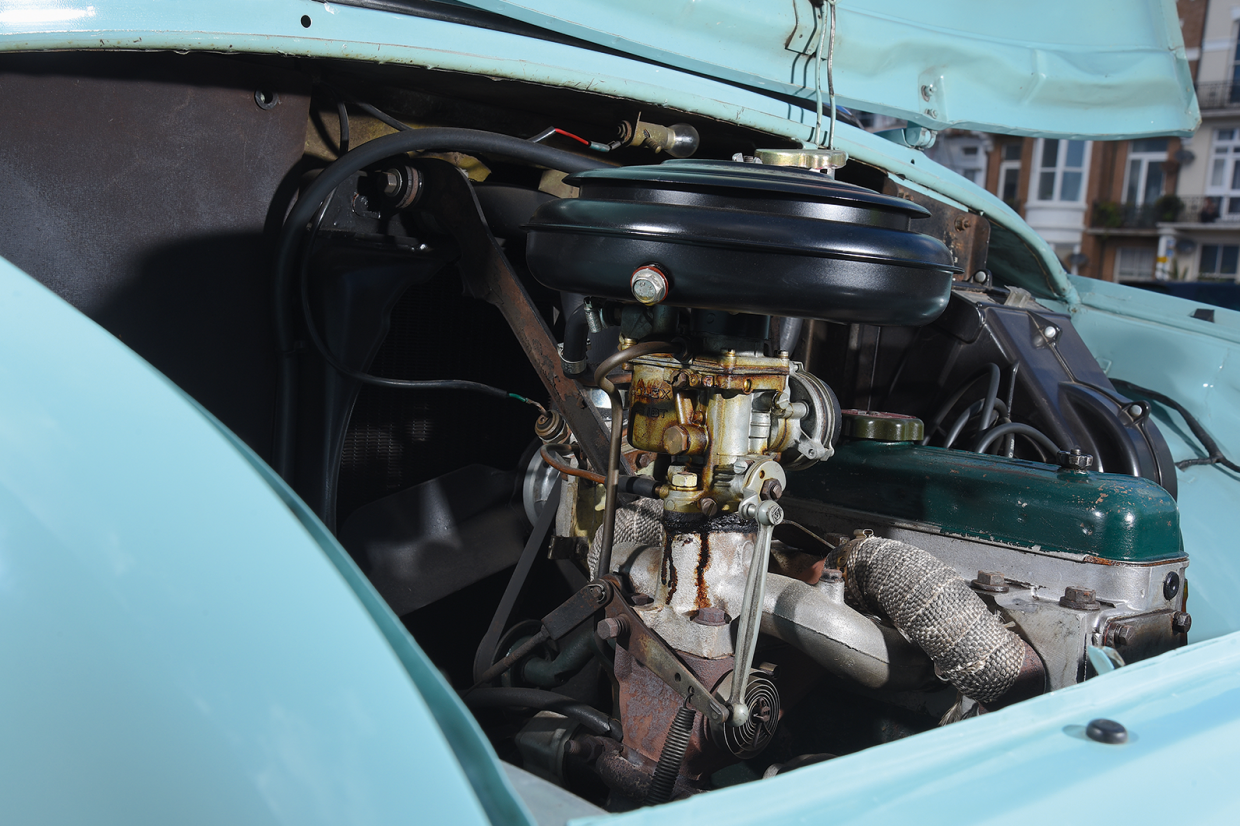 Look for excessive engine oil leaks and heavy breathing (or knocking) that can indicate the wet-liner ‘four’ is nearing rebuild time: new pistons and liners are still available and easy to change. Check the left side of the block, 3in above the sump, for cracks. The fibre gear in the camshaft drive gets noisy when worn.

Poor performance and economy are usually down to a worn carburettor; units are available, as are parts for the normally reliable automatic choke. 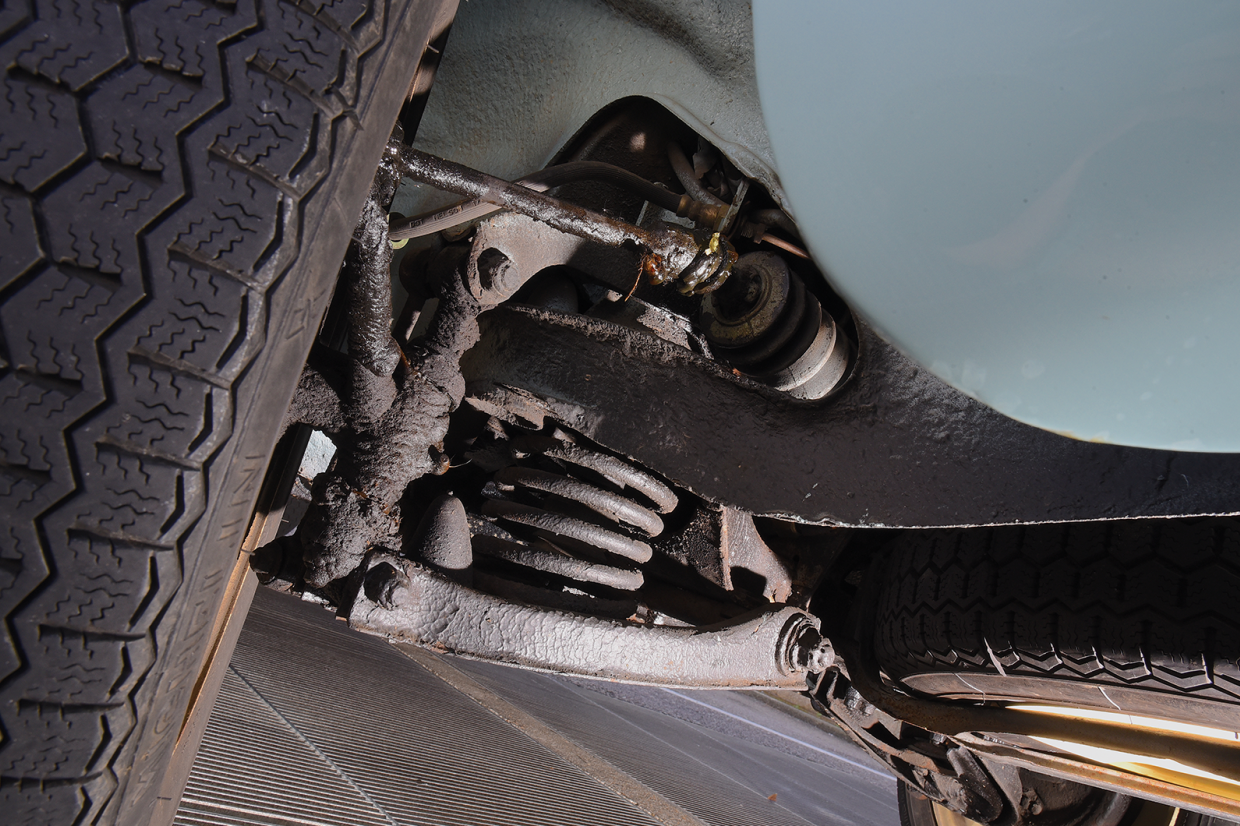 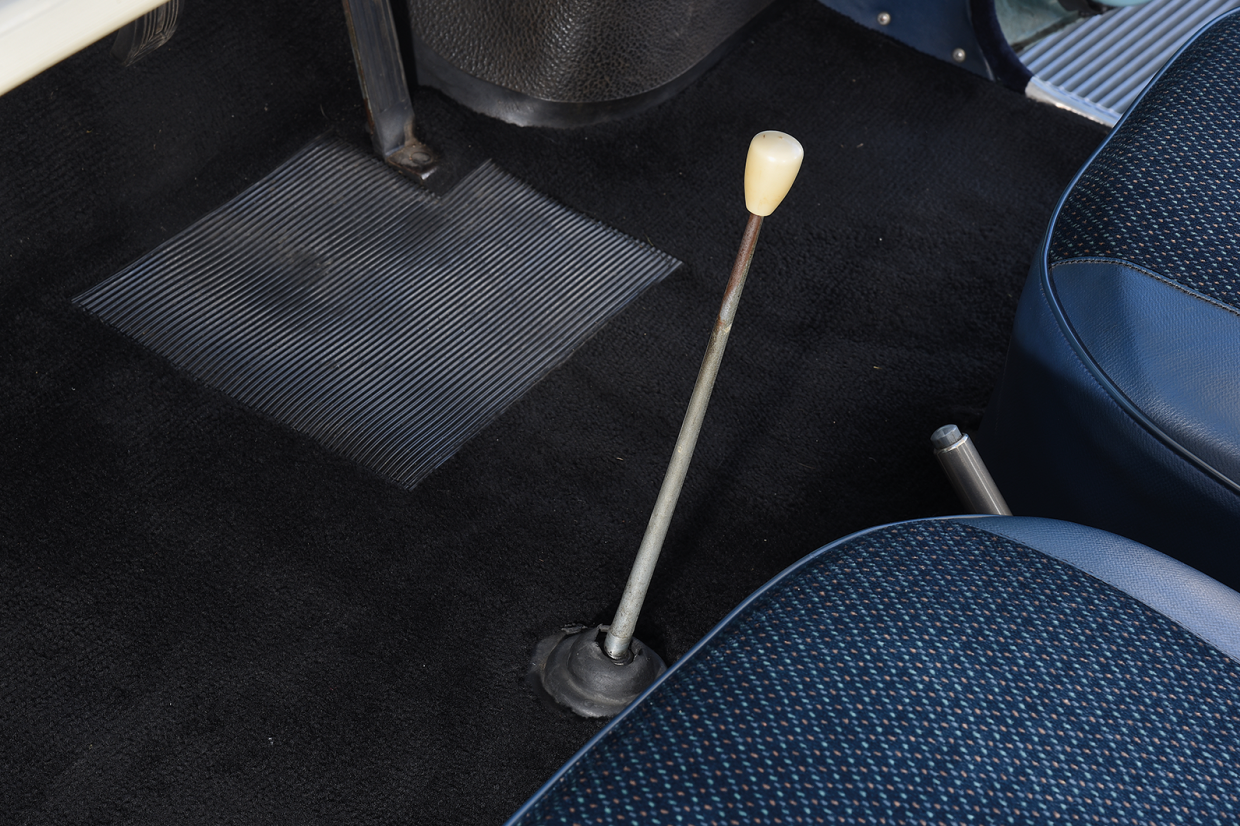 Michelin tyres are excellent but cost more than £100 each; Toyos or Nankangs are cheaper. Brakes seize if rarely used and kingpins wear.

Until ’62, most cars were three-speed with non-synchro first, so practise your double-declutching. Four-speed gearbox is well worth seeking out. 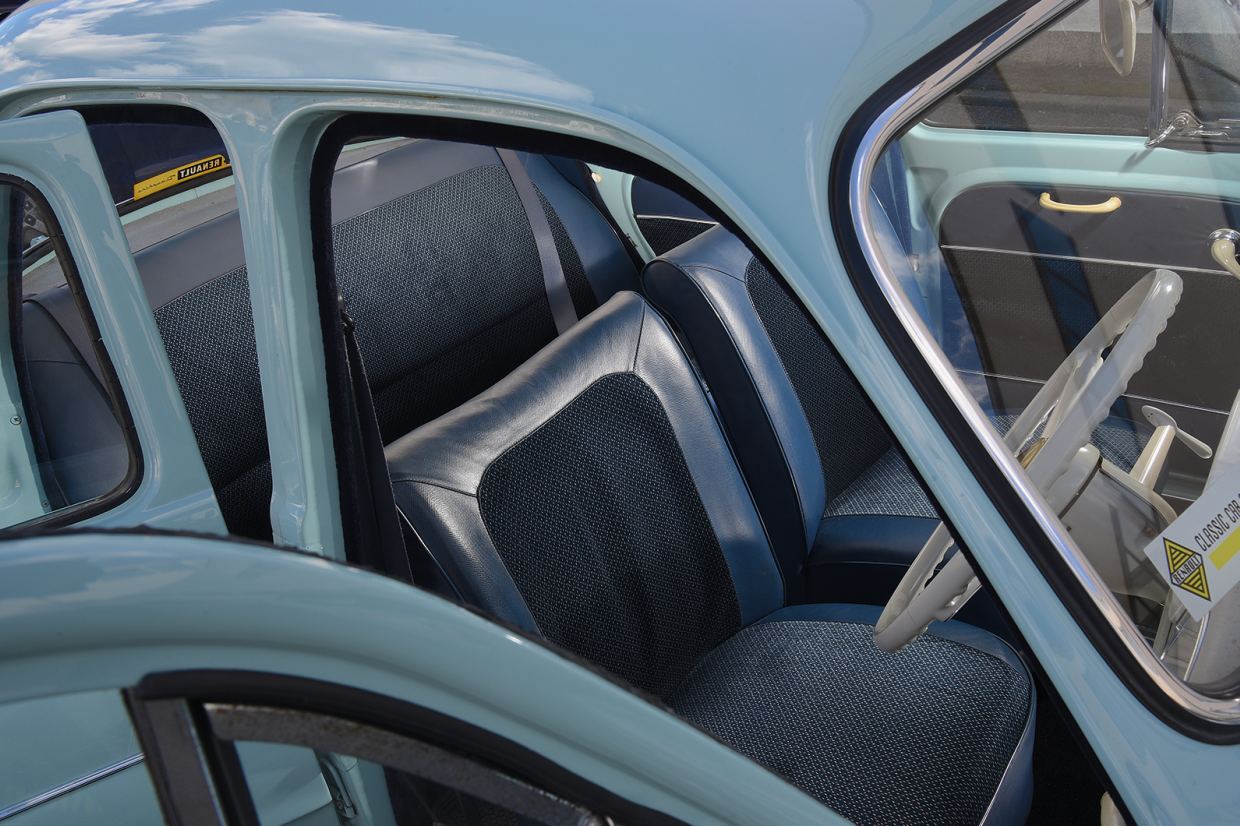 Seat materials or good used parts can be found at French autojumbles, although not for Acton-built cars; even so, body is more critical than trim.

Renault Dauphine: on the road 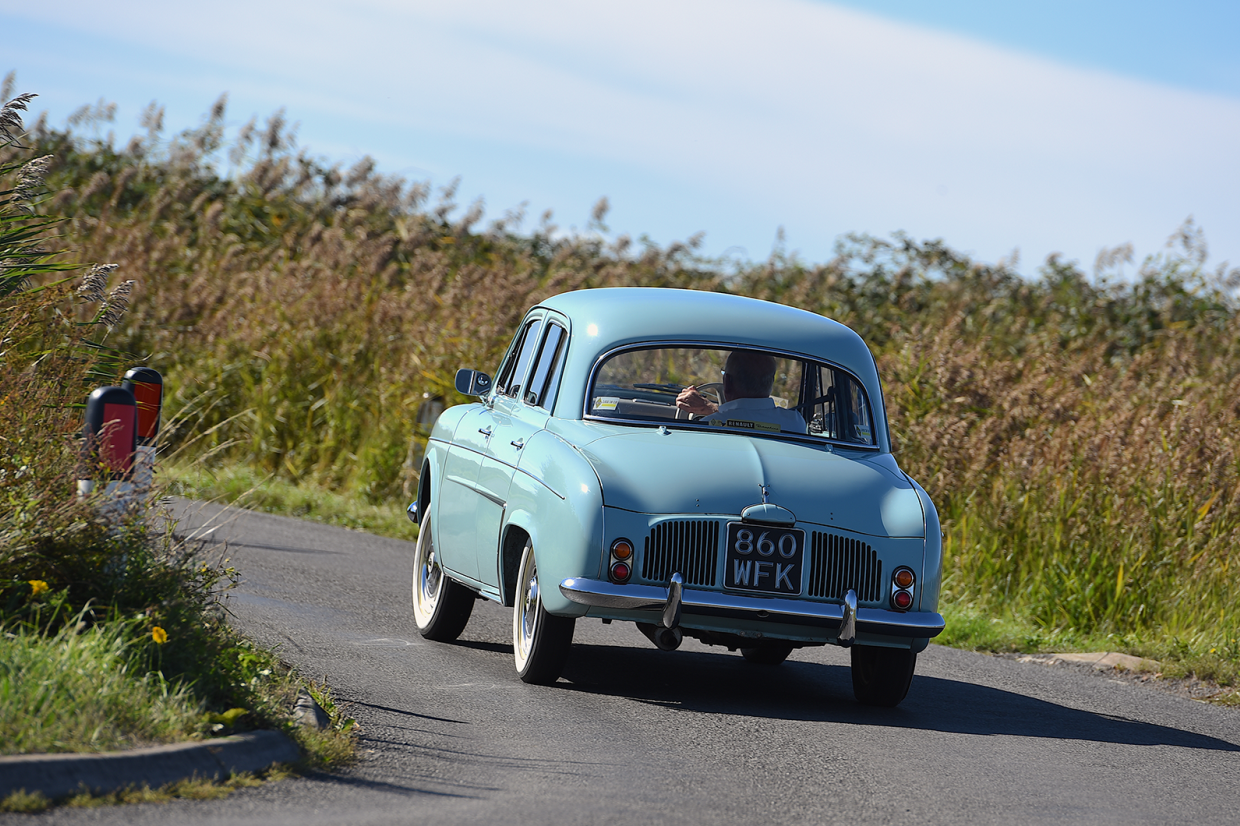 Find a good one with a four-speed gearbox, and maybe some Gordini fettling, and you’ll have great fun in the Dauphine

Low weight and low gearing give the Dauphine a lively feel if the engine is in good fettle; a worn engine and/or carburettor means lacklustre performance (check also for exhaust smoke and oil leaks).

The camshaft is driven by a chain of three gears, the middle one fibre to keep noise down – if the geartrain is noisy, the fibre gear is failing. A full engine rebuild shouldn’t cost more than £1500 and parts are readily available, but a cracked block is expensive to repair.

Transmissions improved significantly during production and you have to be a purist to like the original three-speed without synchro on first; four-speeds are much more usable. The optional Ferodo-made Ferlac electro-magnetic clutch is clever and there’s no need to avoid it; club experts know how to set it up. If engagement is abrupt, it needs to be realigned soon.

Electrics were 6V until 1962 and are perfectly adequate if kept in good fettle (low-energy LEDs can help), but later cars’ 12V systems
are better and cheaper to maintain.

Rubber-cone auxiliary springs (Aerostable suspension) were added in late 1959 on French cars, from mid-1960 on British-built ones, alongside softer coil springs.

This was meant to allow compliance for unladen and fully laden conditions (a full load of passengers and luggage weighs half as much again as the car itself), but was not a great success and was abandoned for 1962. The rubber cones are hard to find now, so conversion to standard suspension may be wise. 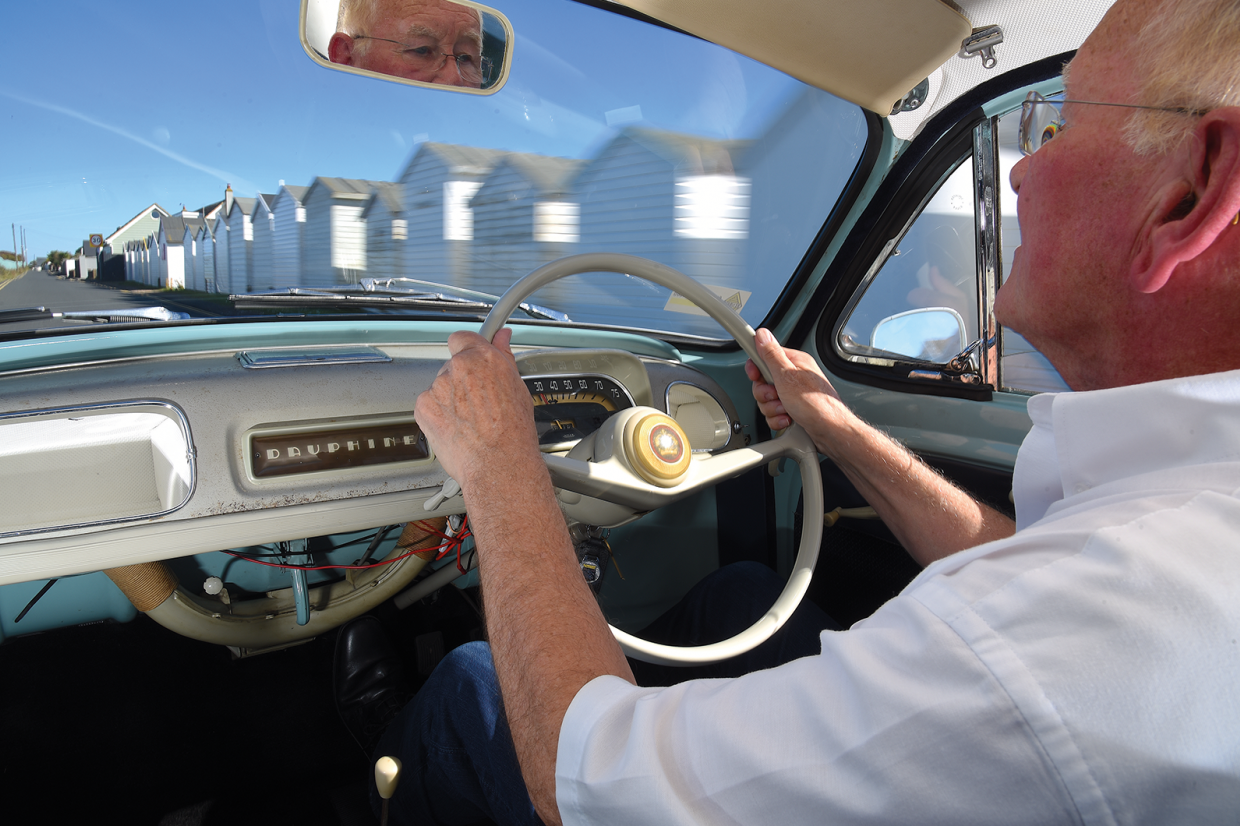 Owner Stuart Kitchen in his Dauphine

“When I was 18 my father bought a Dauphine,” recalls Stuart Kitchen. “It was the sexiest thing on wheels at the time, but he sold it after 18 months because my mother couldn’t cope with the non-synchro first – and it had already started rusting.

“Eighteen years ago I decided to relive that memory and my wife bid on this one for me at auction. It has led a sheltered life, covering only 46,000 miles in 58 years.

“It’s never been restored and I had the engine rebuilt just as a precaution at 45k, and had the radiator re-cored because it was running hot.

“Unfortunately, I now need to replace the original door seals – they went sticky last summer. It’s a 1963 French-built car with four-speed ’box and 12V electrics: we took it to the 50th-birthday gathering in France.” 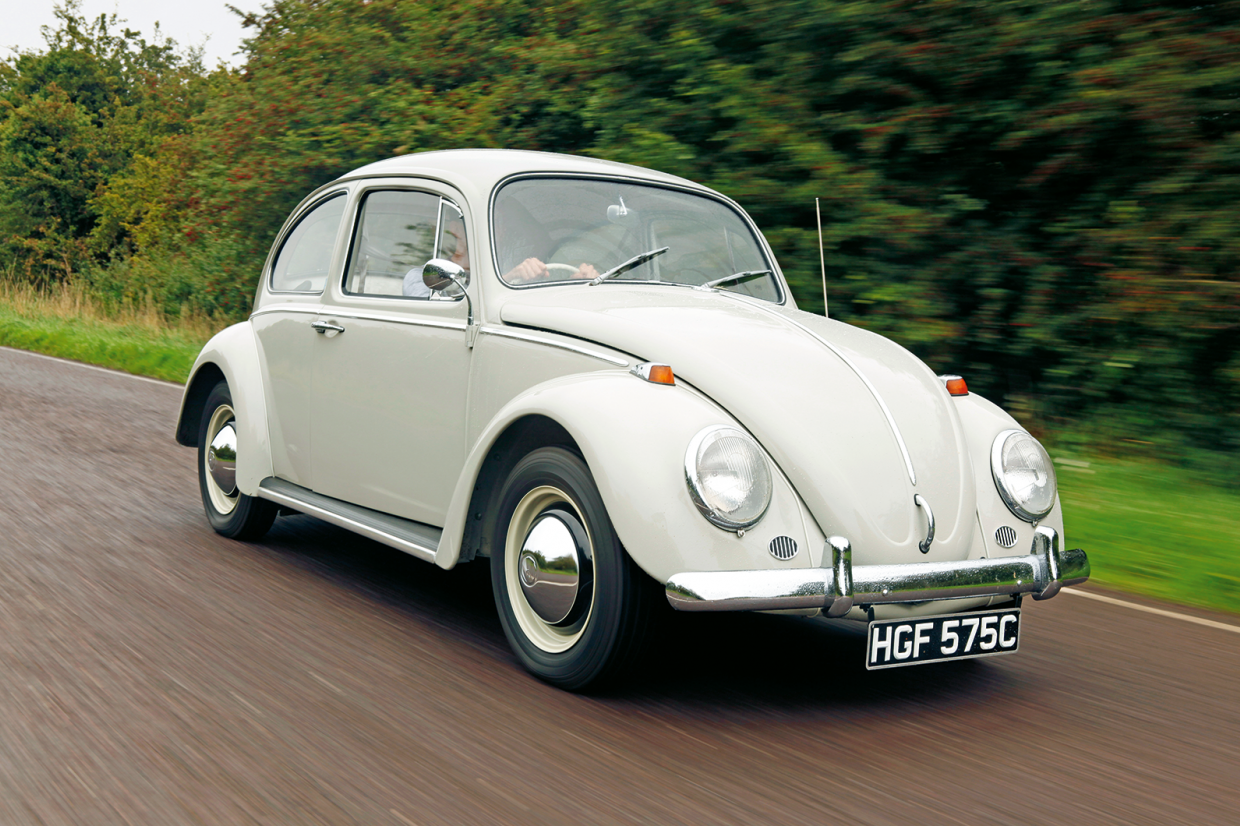 More torque but no more power from the unburstable air-cooled flat-four, with 6V electrics and a four-speed gearbox. 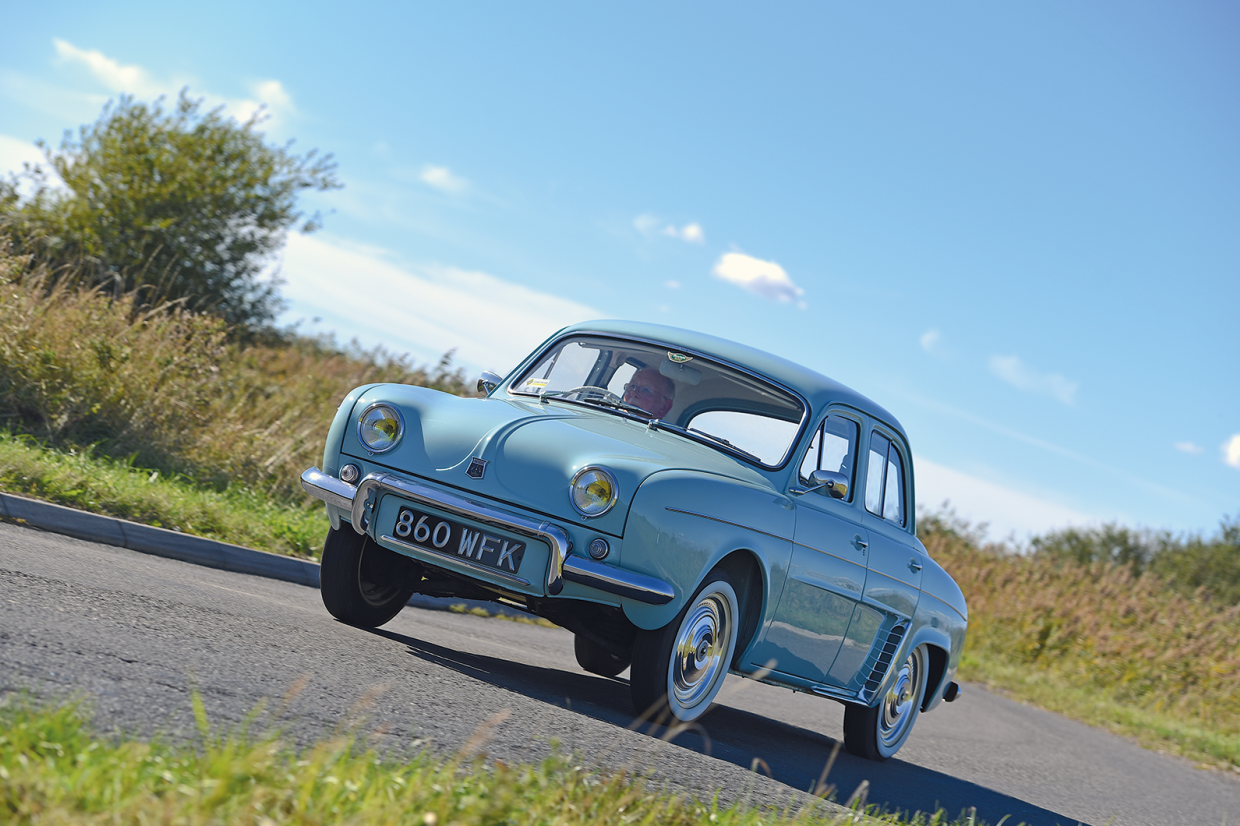 The Dauphine was the most fashionable small saloon to be seen in, thanks to attractive styling that concealed the rear engine location

Prices have gone a bit silly in France for verified examples of the rare Rally 1093 model, but Gordinis and regular Dauphines still represent good-value, usable classics – provided you keep on top of the rust bug.

Restored cars aren’t as light as originals – they may not be as lively, either. Make sure repairs have been done properly.

Great looking and surprisingly spacious; most parts are available and affordable 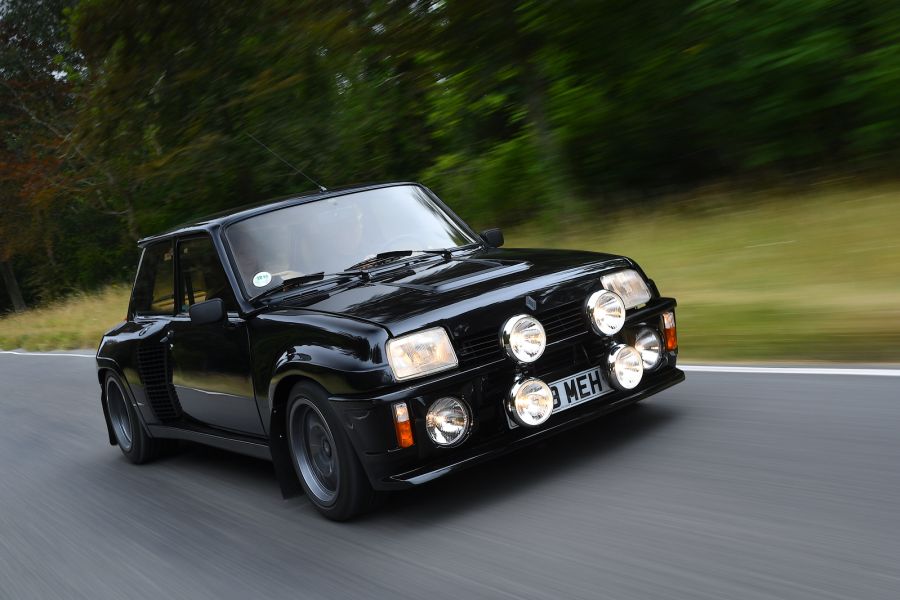 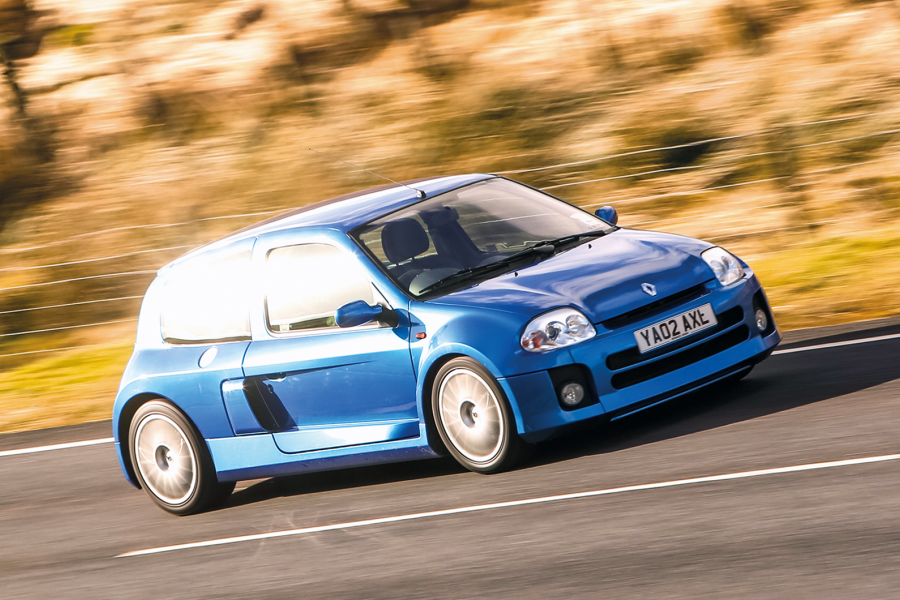 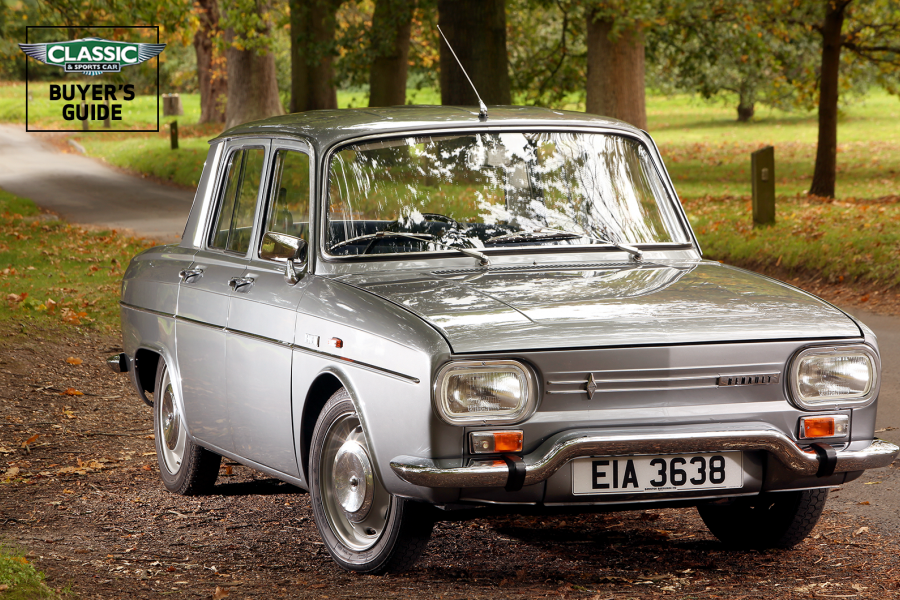 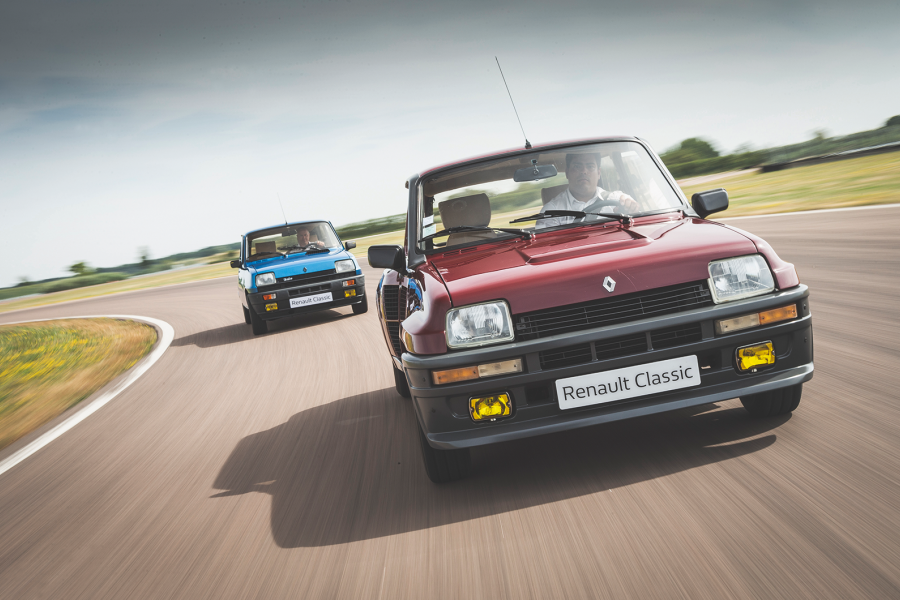