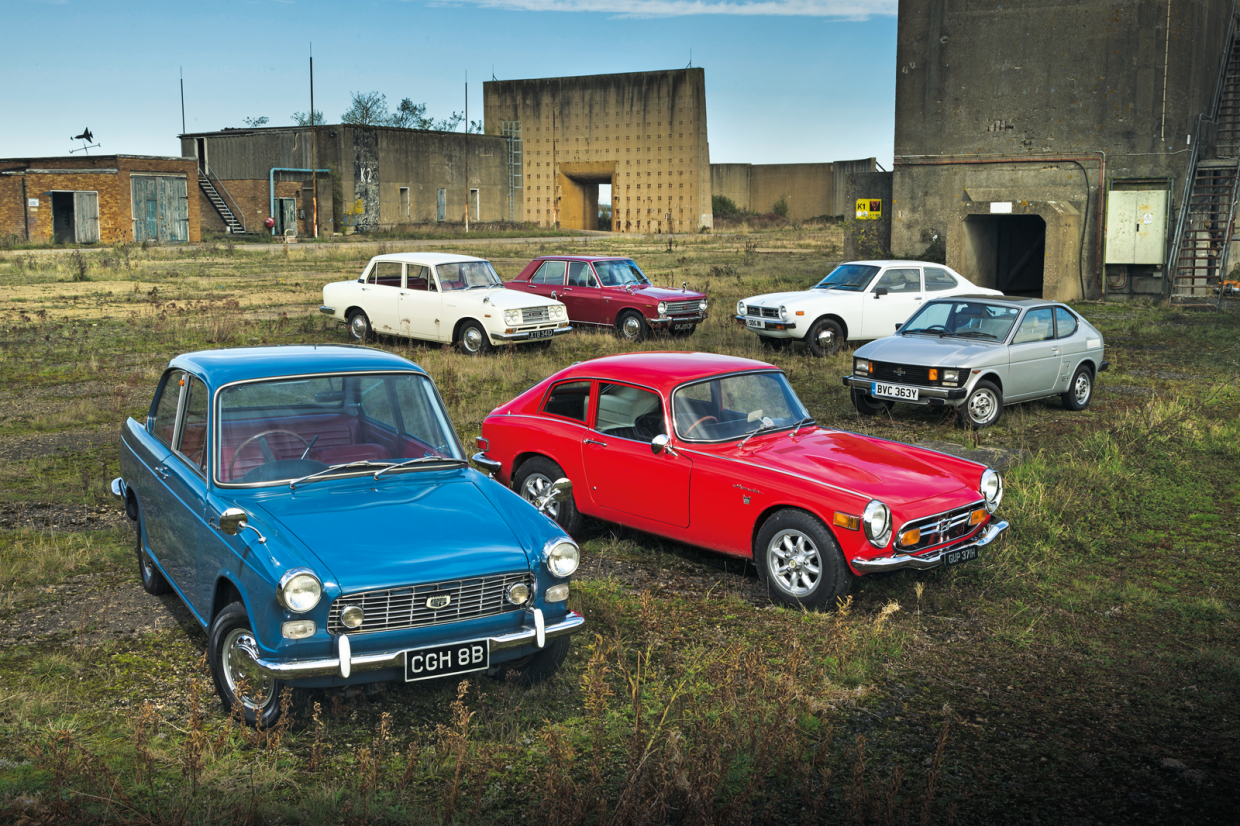 When Dufay Motors announced in 1964 that it was to sell imported Daihatsus, it quietly heralded a British automotive revolution.

At that time, the Japanese motor industry was producing 1,702,469 cars a year, but tweed-jacketed types regarded the Compagno as an interesting novelty.

Eleven years later, however, such was the success of automobiles from the Land of the Rising Sun that the Society of Motor Manufacturers and Traders negotiated a ‘voluntary restraint’ of imports from Japan.

So where better to start sampling a group of pioneer British-market Japanese cars than CGH 8B, the first official import and the very Daihatsu that was reviewed by Autocar in 1965. 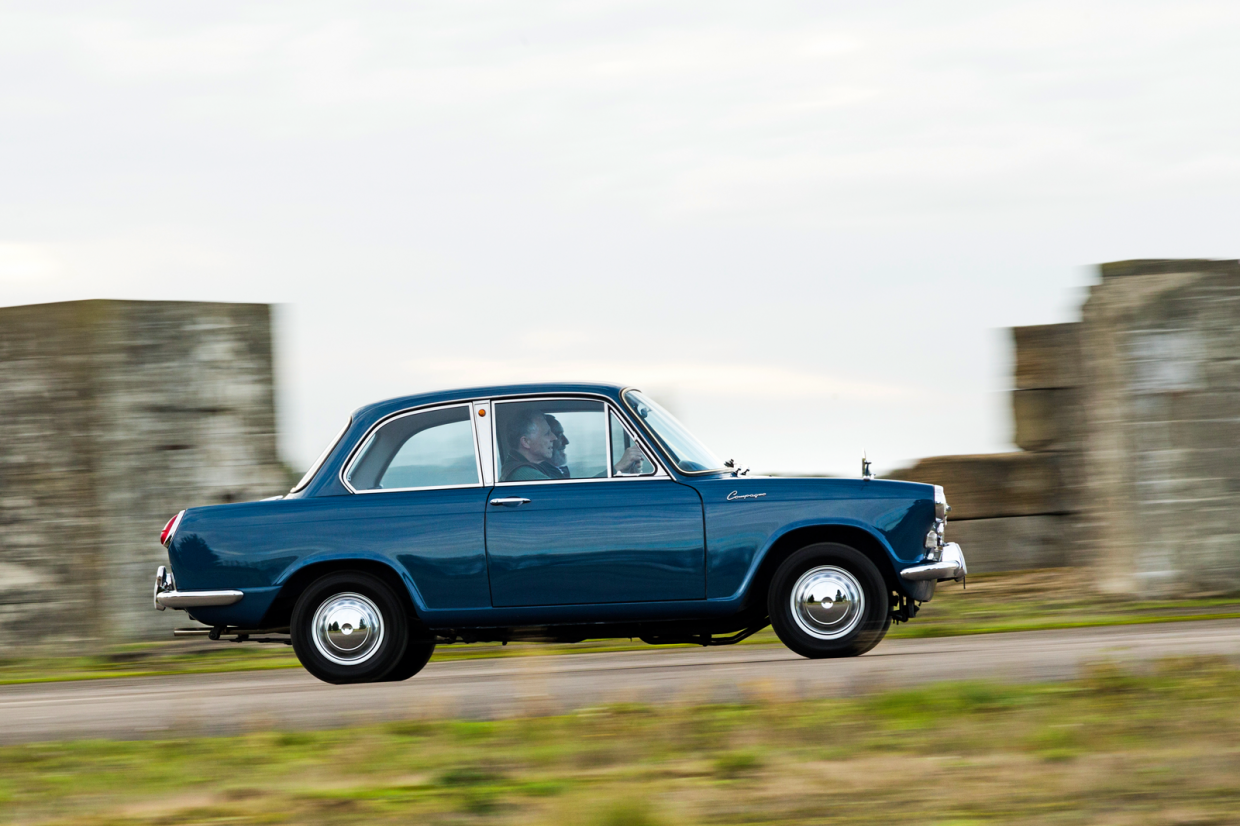 The UK’s first official Japanese import, this Daihatsu Compagno has a handsome profile

The tester thought the Compagno ‘well made but technically unadvanced’ – although the likes of the Vauxhall Viva HA were not exactly cutting edge.

He also complained that it wouldn’t reach 60mph on a one-mile straight against a strong headwind, but the Daihatsu’s main appeal was as a chic town car rather than M1 transport.

The first-ever Japanese car in the UK now resides at the headquarters of official importer International Motors in Solihull. 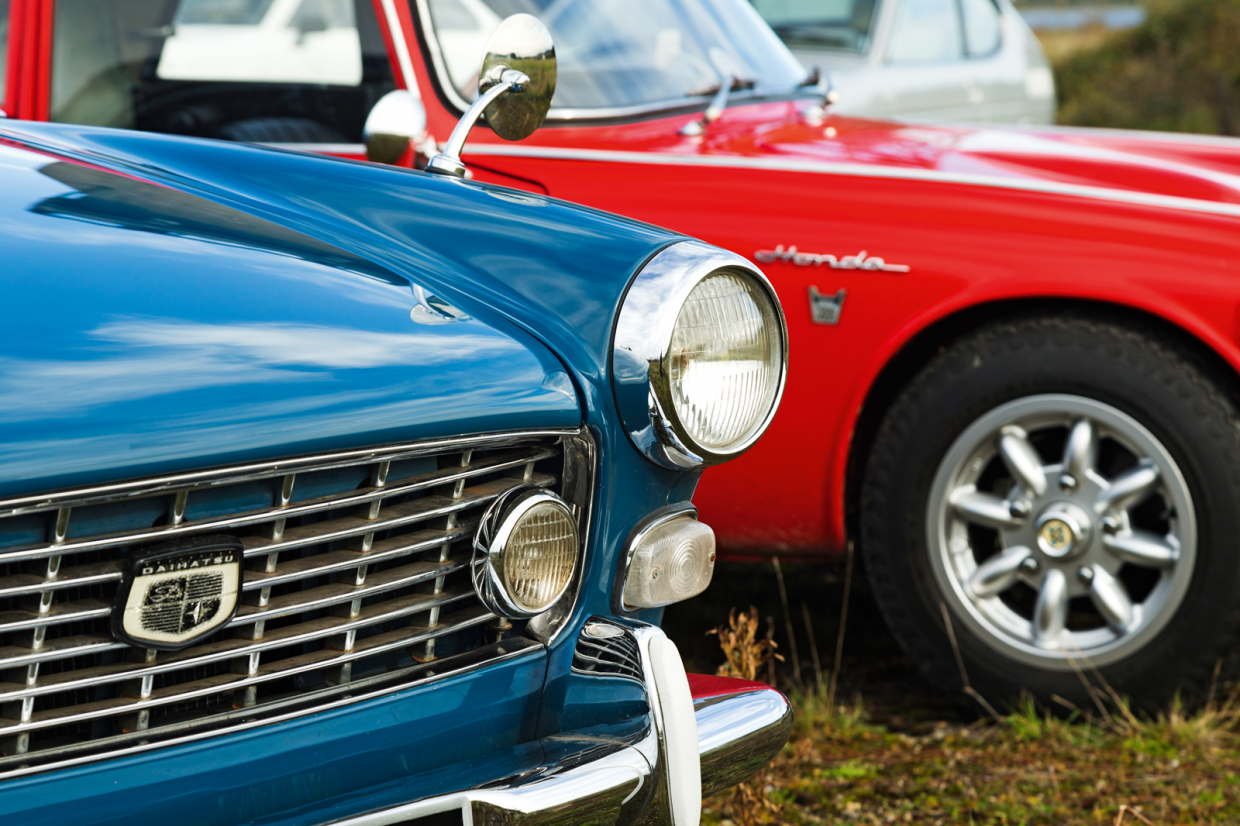 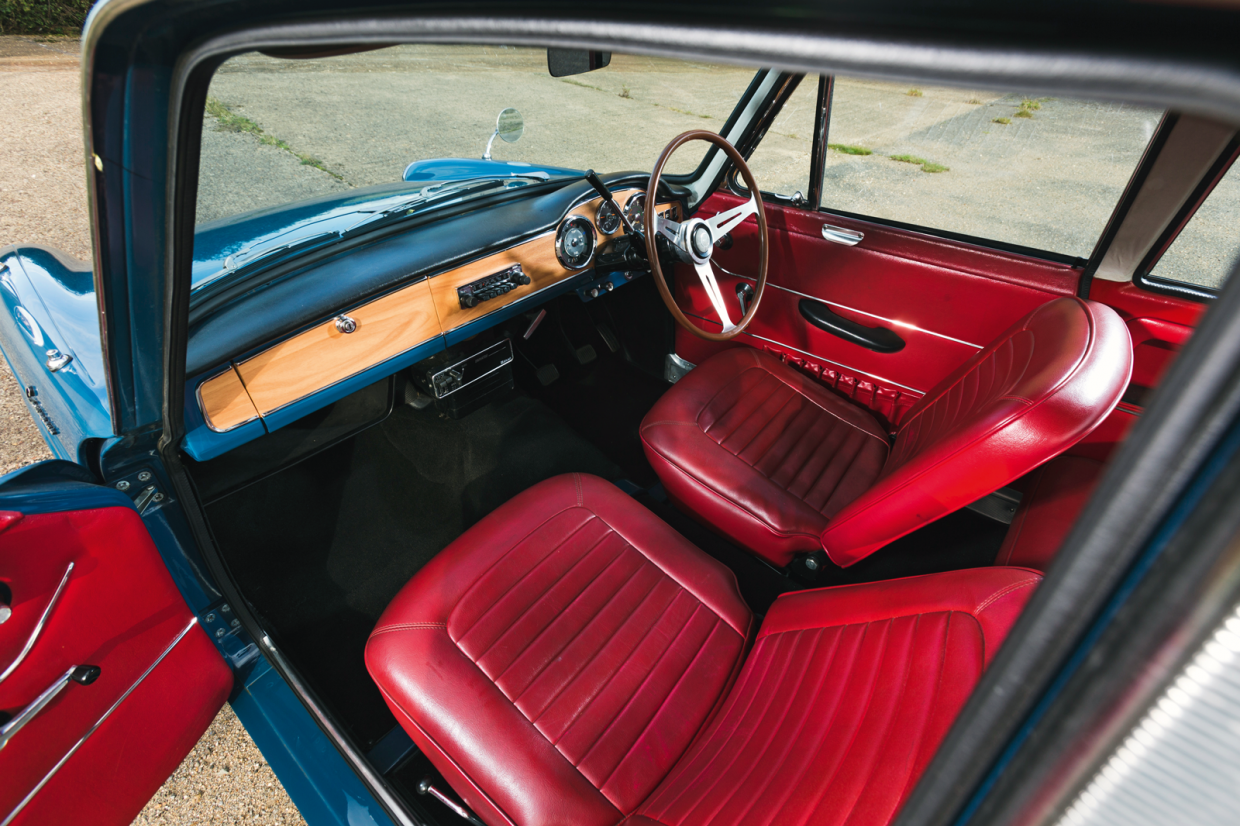 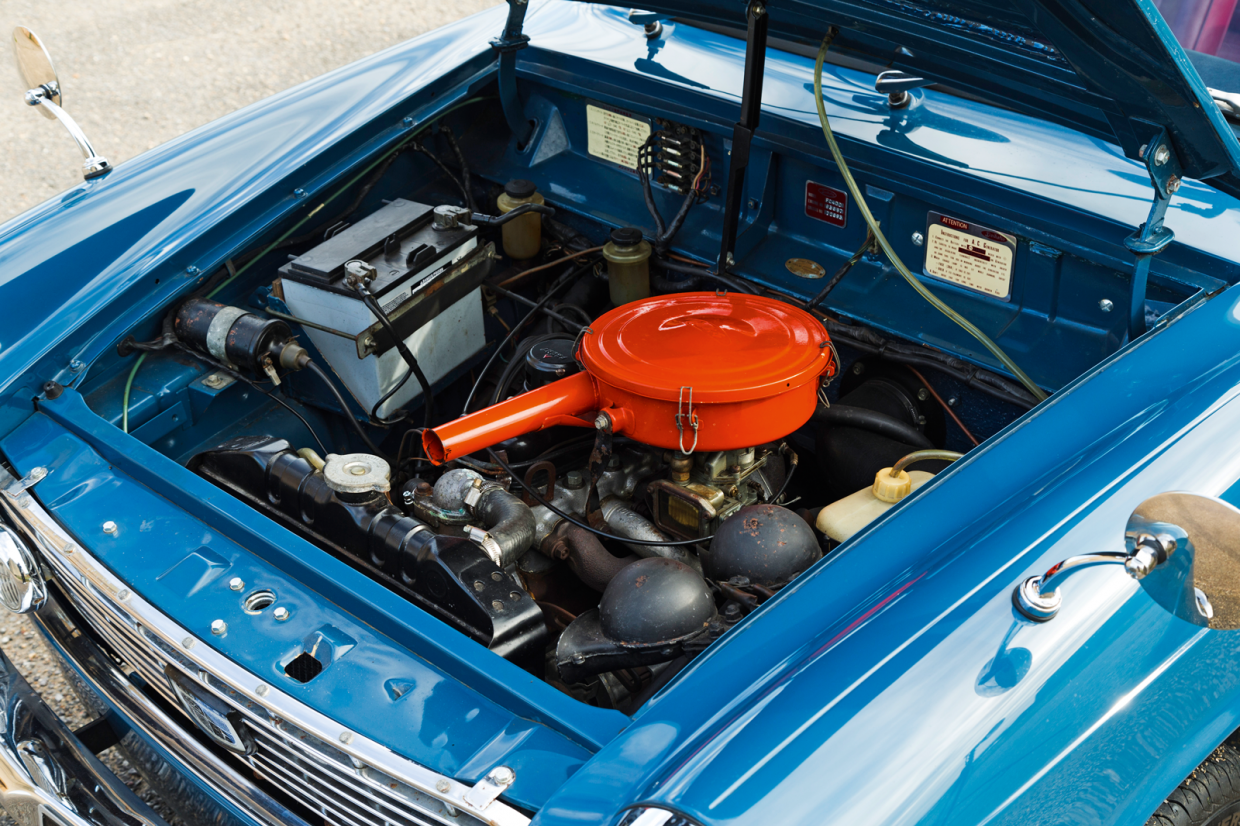 Clockwise from top: the Daihatsu has a Lancia-style grille; power comes from this sweet 747cc ‘four’; the Daihatsu’s well-equipped interior continues the Italianate theme

The Compagno took a bow in 1963, with the Fiat-like Vignale-styled body combined with a separate chassis.

The 800 range was built until 1970, but the average British motorist is most likely to have encountered one being consumed by Godzilla at their local cinema.

Aside from the challenges of selling a Japanese car 20 years after the end of WW2, a £799 price-tag meant the Daihatsu was considerably more expensive than a Ford Anglia 123E.

However, any dealer would be able to highlight its good looks and standard equipment that included fog and reversing lamps, whitewall tyres and even a radio. 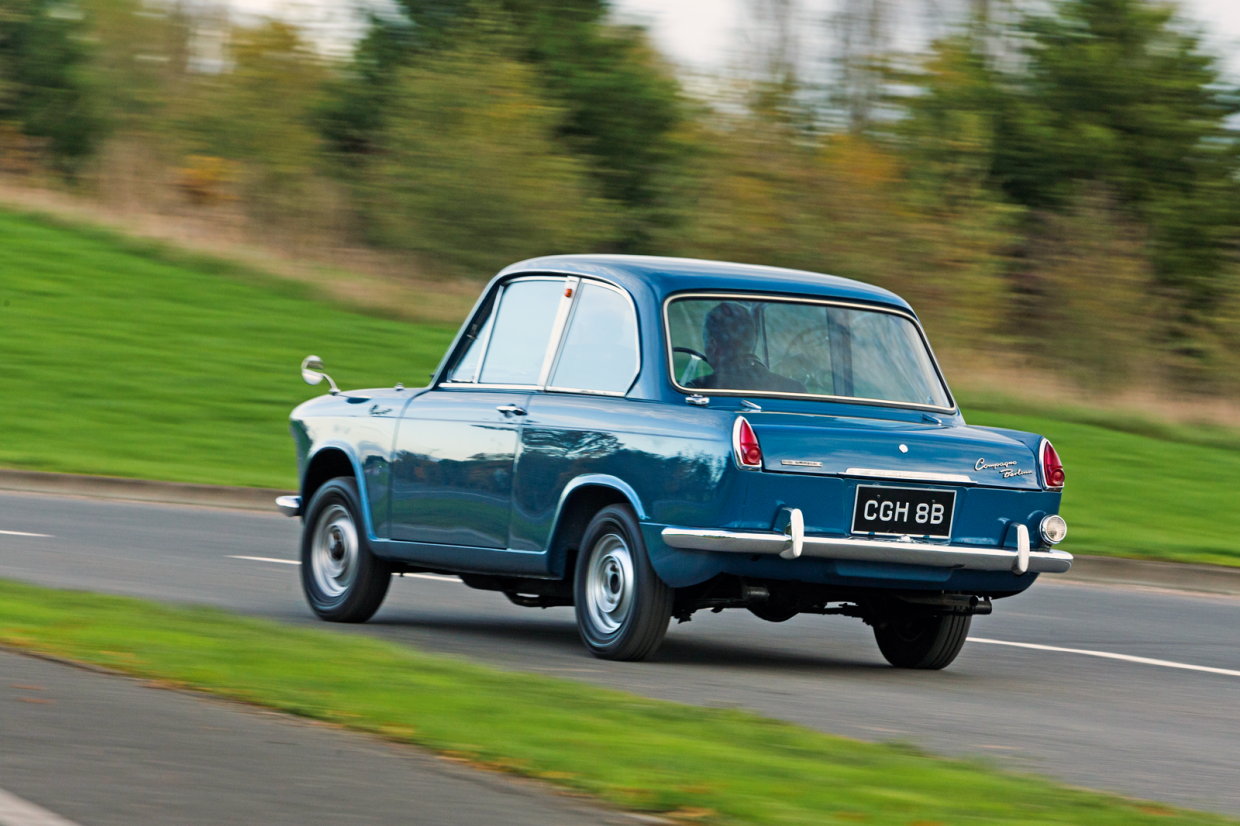 Eardley has no doubts that the Compagno could have been a success in the UK had it been properly marketed.

“Dufay only had eight vehicles to begin with, and couldn’t pay the manufacturer for them until they were sold. Daihatsu in Osaka thought its distributor would honour the debt, but having sold the cars Dufay went into liquidation without paying for them.”

Today, CGH 8B is simultaneously a reminder of a lost opportunity and a harbinger of the future. 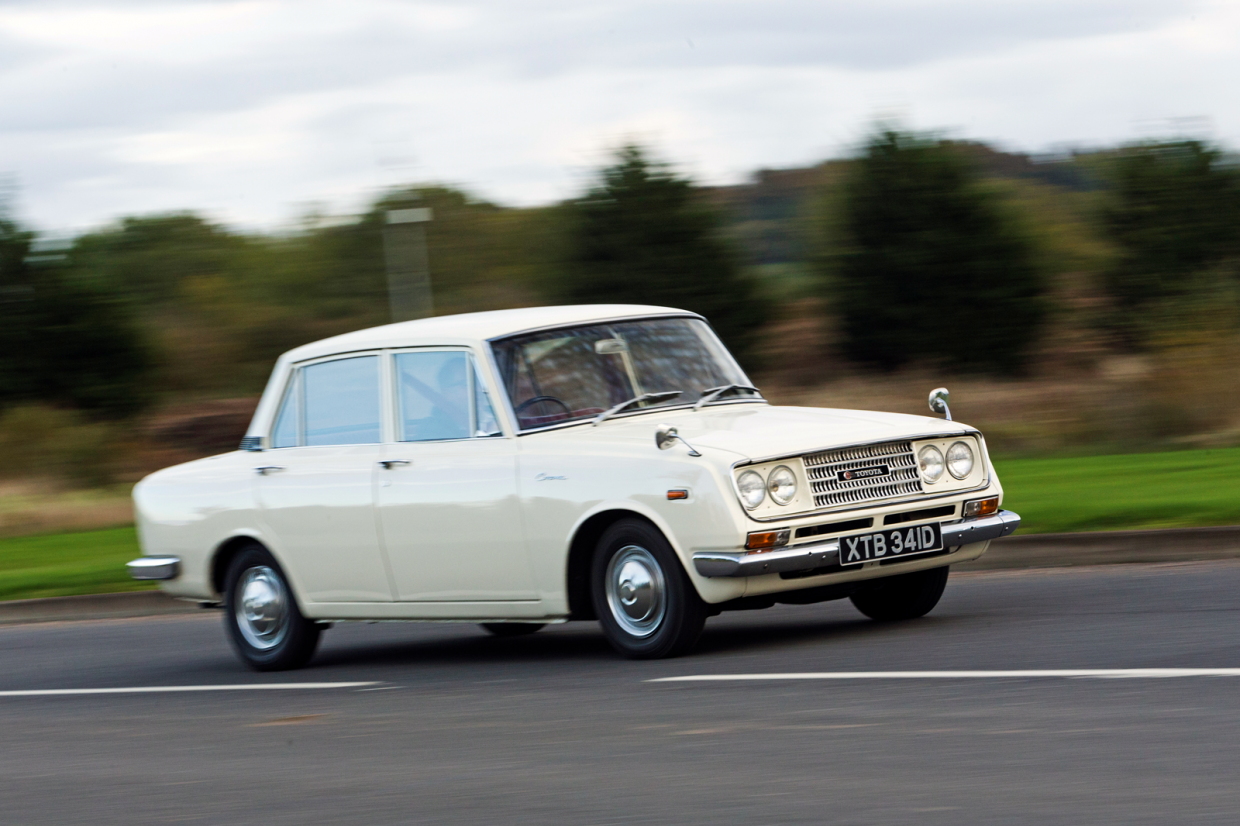 The next Japanese manufacturer to tempt the British motorist was Toyota, with a four-car line-up appearing at the 1965 London Motor Show, and the firm hoping that sales would reach 150-200 units per month by ’66.

Toyota unveiled the third-generation T40 Corona in 1964 and, while the outgoing T20 and T30 featured quasi-Detroit lines, the new model was styled by Pininfarina.

From a modern perspective the Toyota appears ornate rather than fussy, although the official term was ‘Arrow line’.

The entry-level model was tested by Autocar in 1966 and found to be ‘a well-made family four-seater with lively performance’. 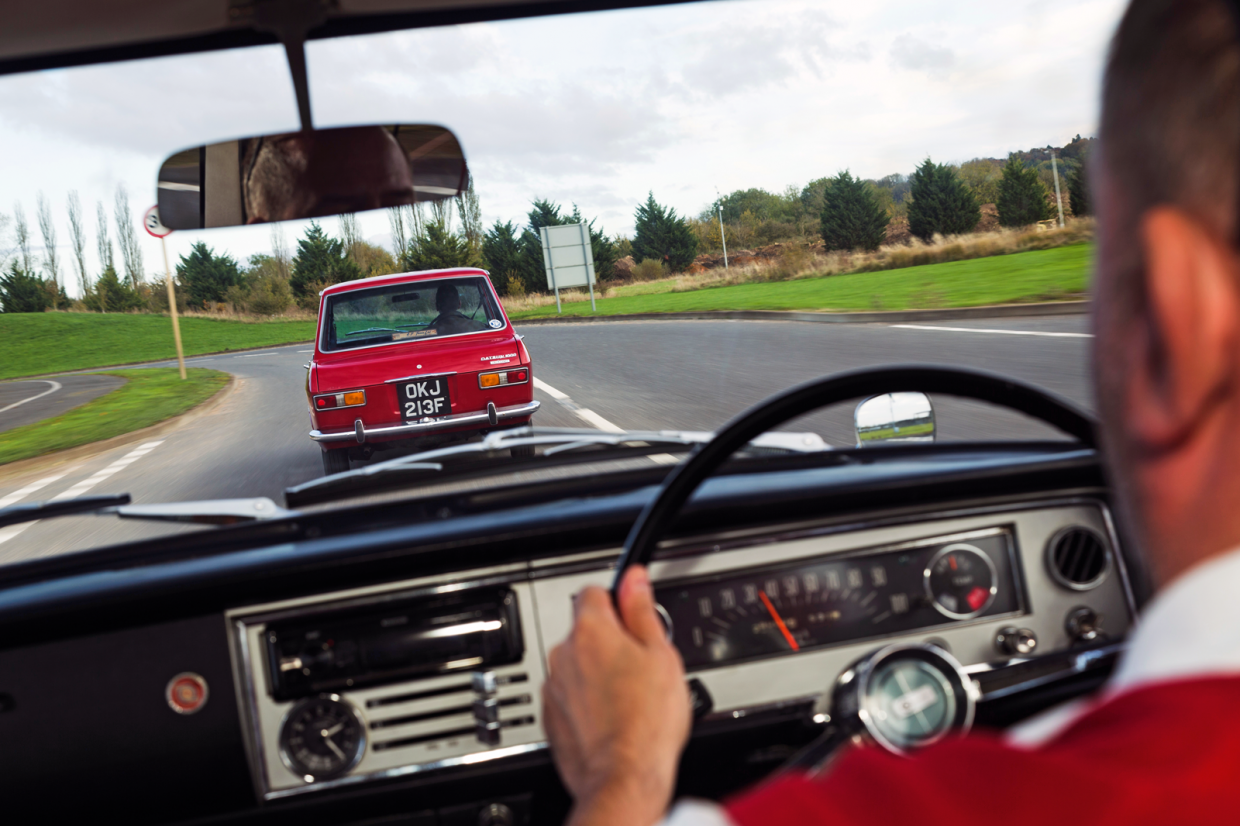 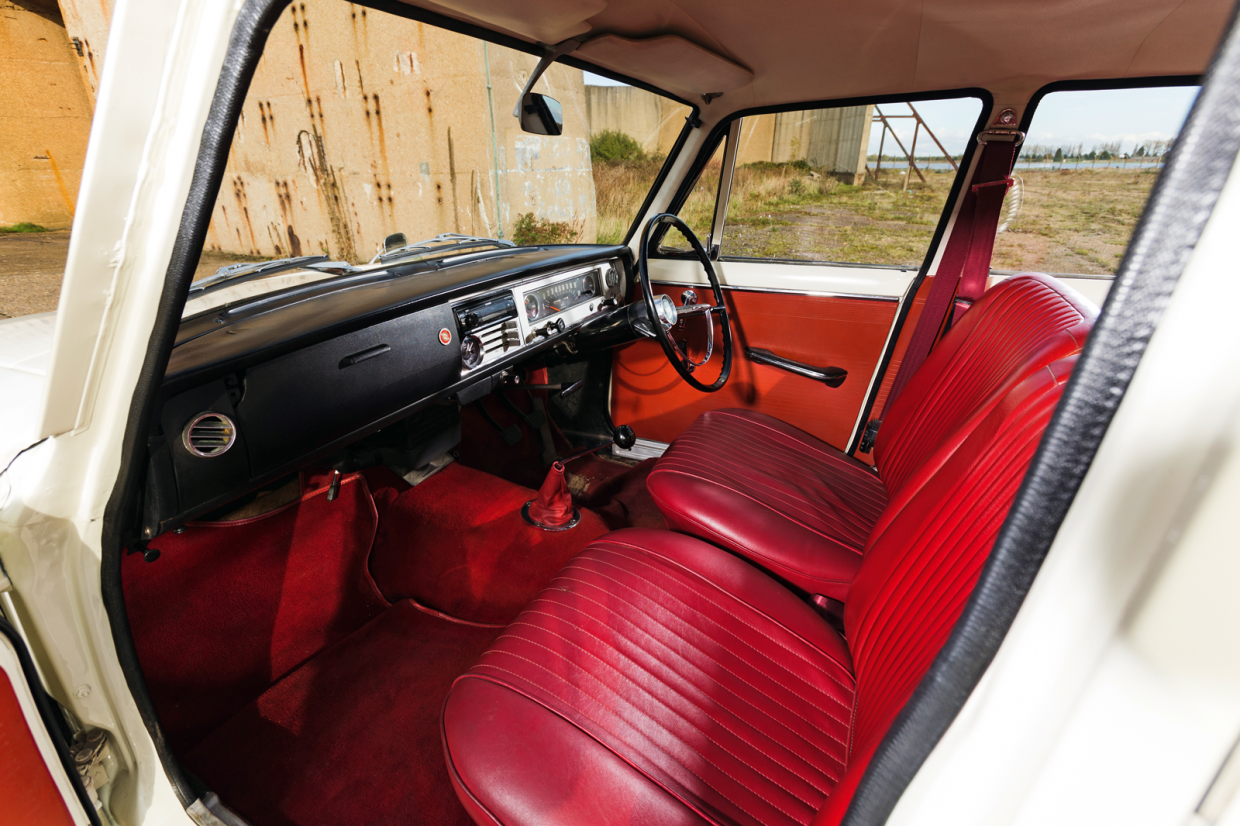 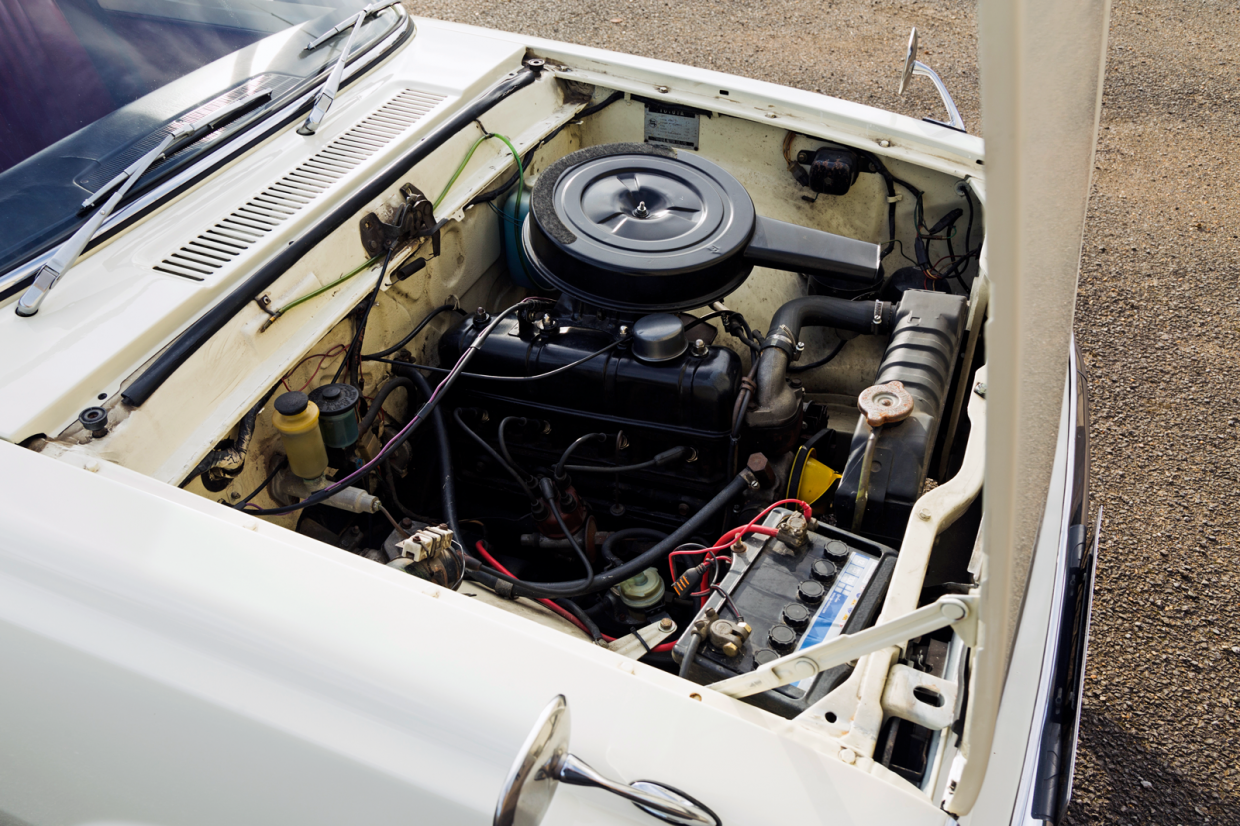 Clockwise from top: Toyota chases Datsun – the two would become arch rivals in the market and on the road; the 1.5-litre ‘four’ musters a handy 74bhp; the Toyota Corona has a spacious interior for a family

The T40 was also built in Australia, New Zealand and South Africa, much to the consternation of BMC’s overseas sales division.

‘Our’ Corona is a De Luxe version, with an enticing specification including a clock, heated rear ’screen and a radio.

Such luxuries enticed curious motorists to call Motor Imports to arrange a test drive, although there would be social consequences of opting for a Corona over a Hillman Minx.

The sight of a Toyota on the drive would prompt a formation bout of curtain-twitching and mutterings of “unpatriotic” from the neighbours. But by the time the T80 replaced the T40 in 1970, many Britons had already decided to ‘buy foreign’. 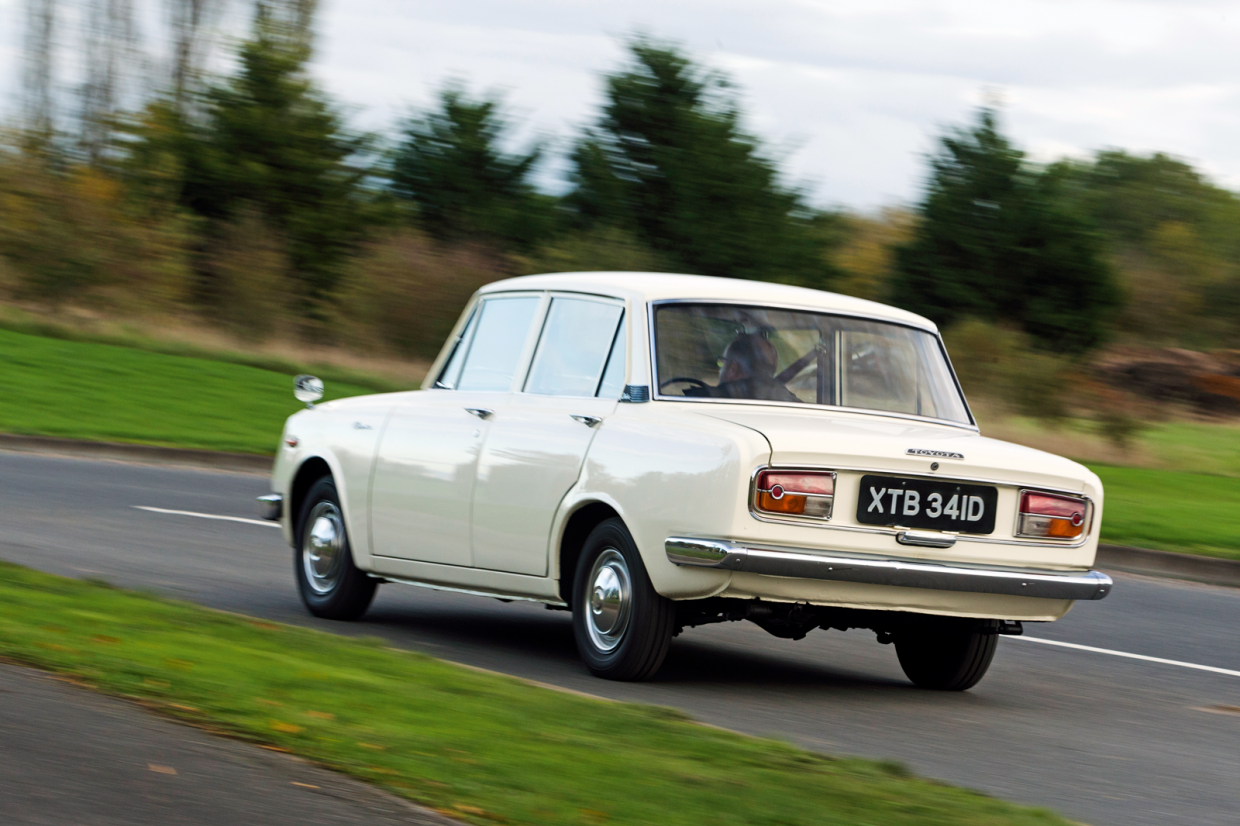 The brakes present a minor challenge because, while they are strong enough, they are “rather on or off ”.

That aside, however, this 54-year-old car remains a classic that could easily be used as a daily driver.

Around the same time that Toyotas were starting to appear in outer suburbia, Triumph, MG and Austin-Healey dealers were already becoming concerned about a Honda described by Autocar as ‘a little projectile’. 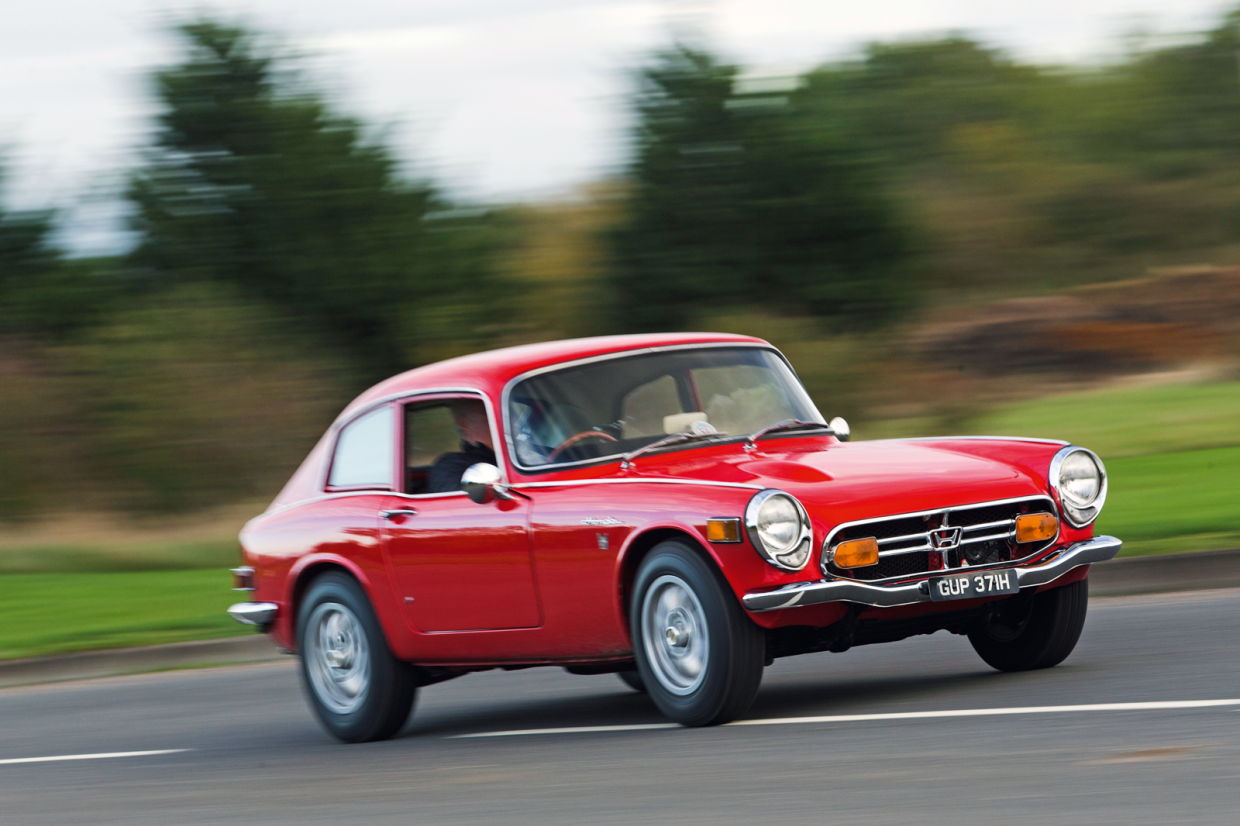 In the 1960s, more than a few ’bikers of the Gene Vincent School of Fashion would loudly opine to their fellow Ace Café habitués that Japanese motorcycles were sub-par (or words to that effect).

But as early as 1962, sales figures of the newly formed Honda UK had reached five figures, and in the following year the company introduced the S500 sports car. 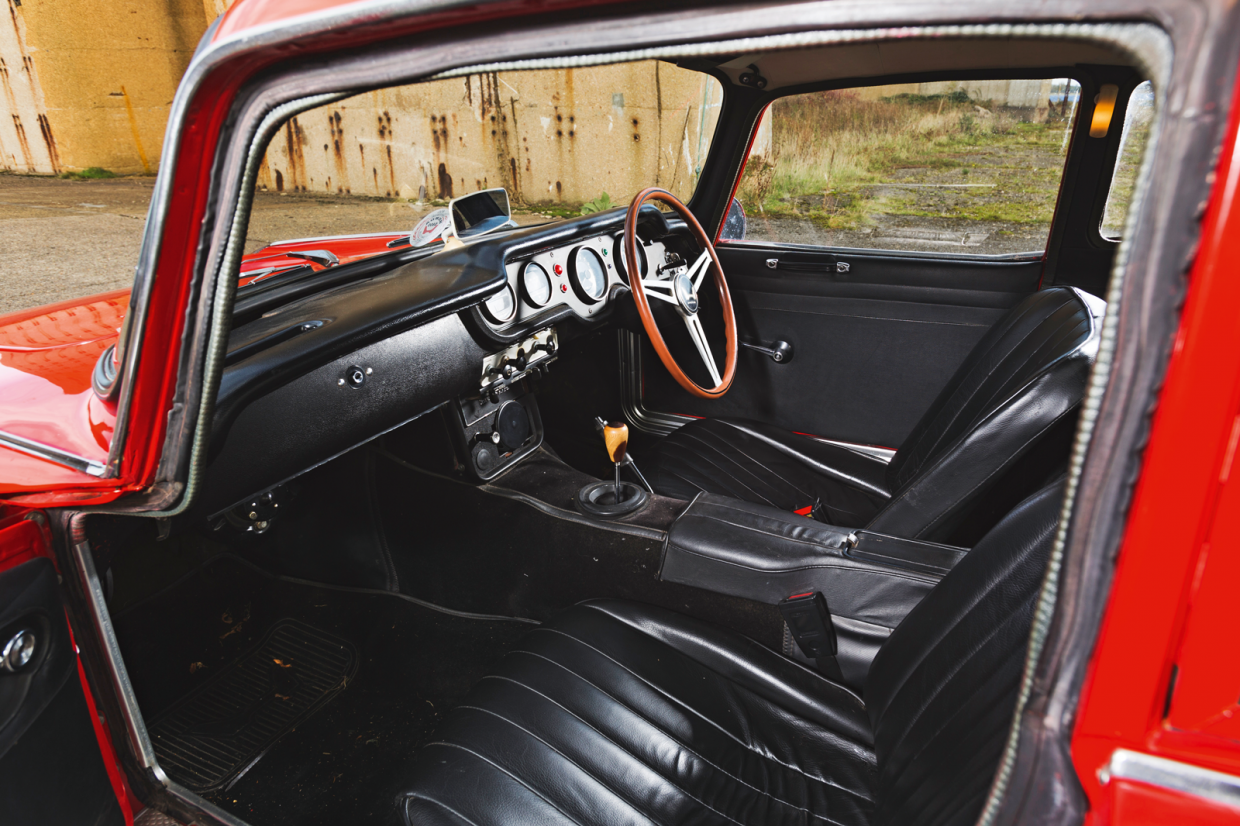 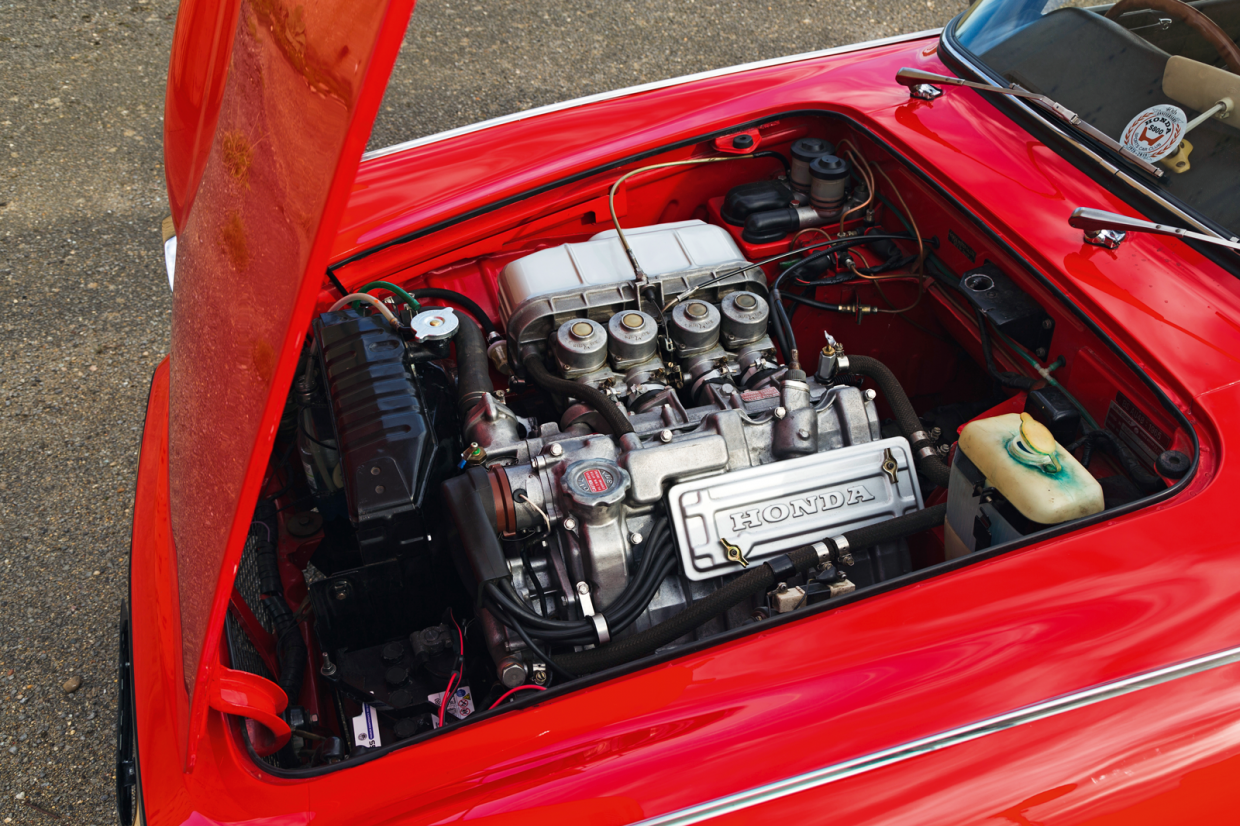 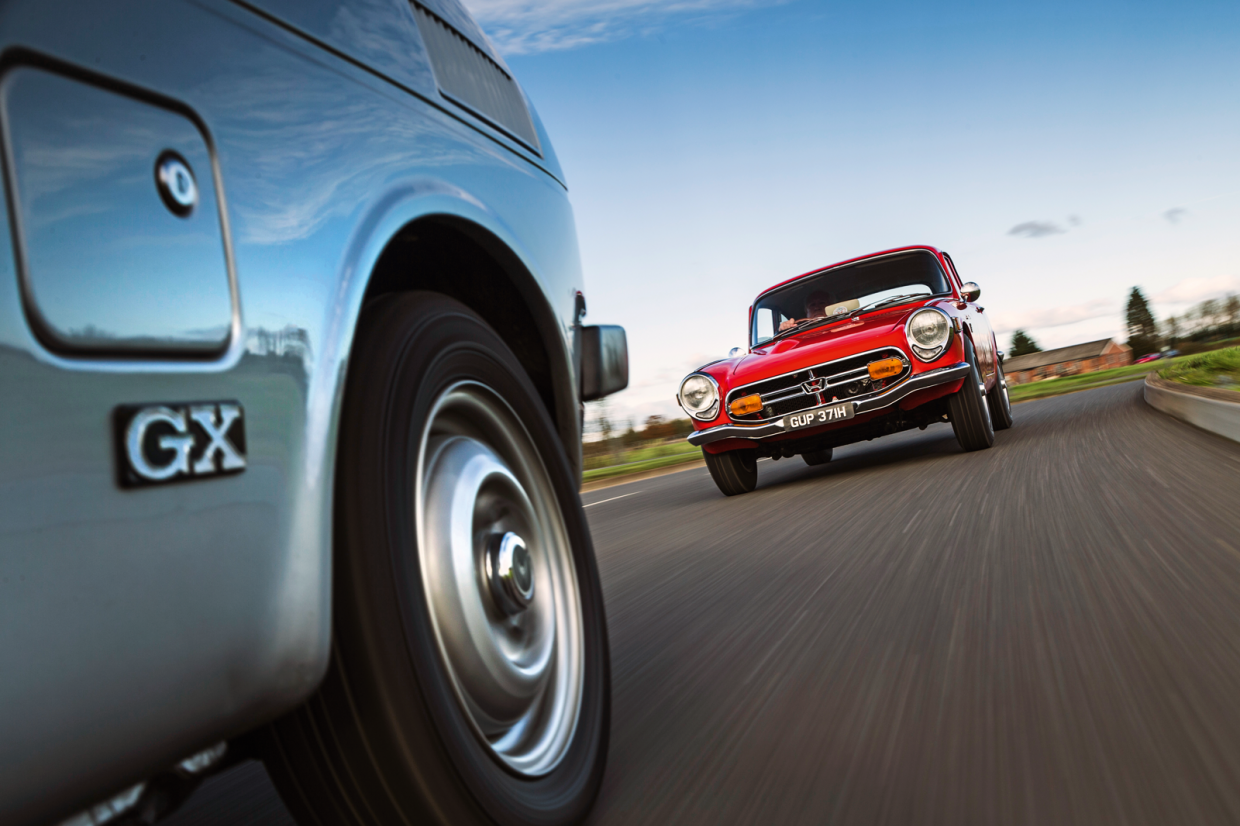 Clockwise from top: the Honda S800’s snug cabin; despite its youthful looks, the sparkling little Honda sits on an archaic separate chassis; the high-revving quad-carb motor dominates the character of the S800

An open car appeared at Earls Court in ’66, and British sales commenced the following year.

Motor Sport was impressed, suggesting that: ‘The exciting light-alloy, roller-bearing, twin-cam engine is much more attractive than an iron pushrod power unit.’ 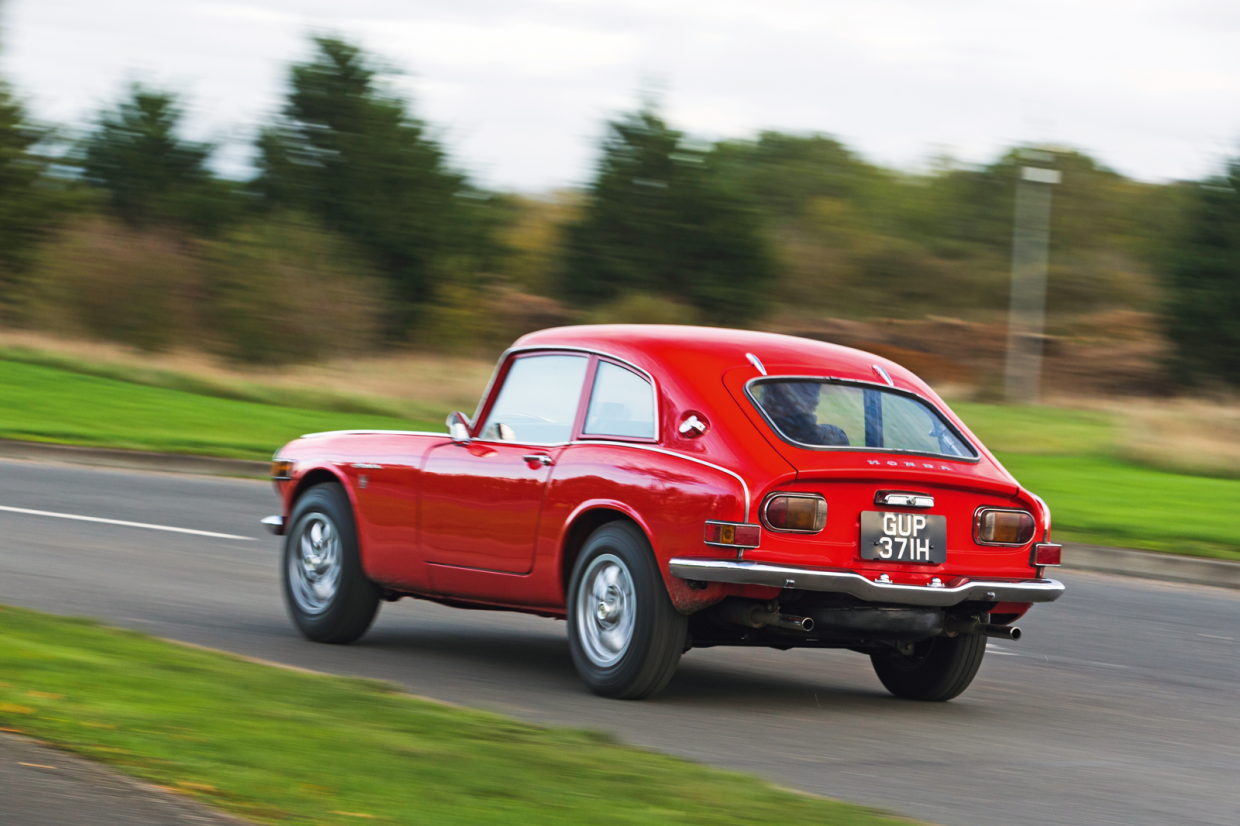 The neat rear styling of this Honda S800

Philip Joisce has owned his 1969 Coupé for four years. “One of the most common reactions is, ‘Wow! I’ve never seen one in the metal,’” he says.

Motor thought that above 6000rpm the noise changed from ‘slightly fussy to nearly hysterical’, and the Honda does sound almost permanently frantic.

The cabin is compact and bijou, with the emphasis on the former, but Joisce regards the Honda’s size as one of its many positives: “You can take a racing line without leaving your side of the road!”

Half a century ago, countless drivers held similar opinions, and the ‘world’s fastest production 1-litre car’ established the marque’s reputation with four-wheel transport. 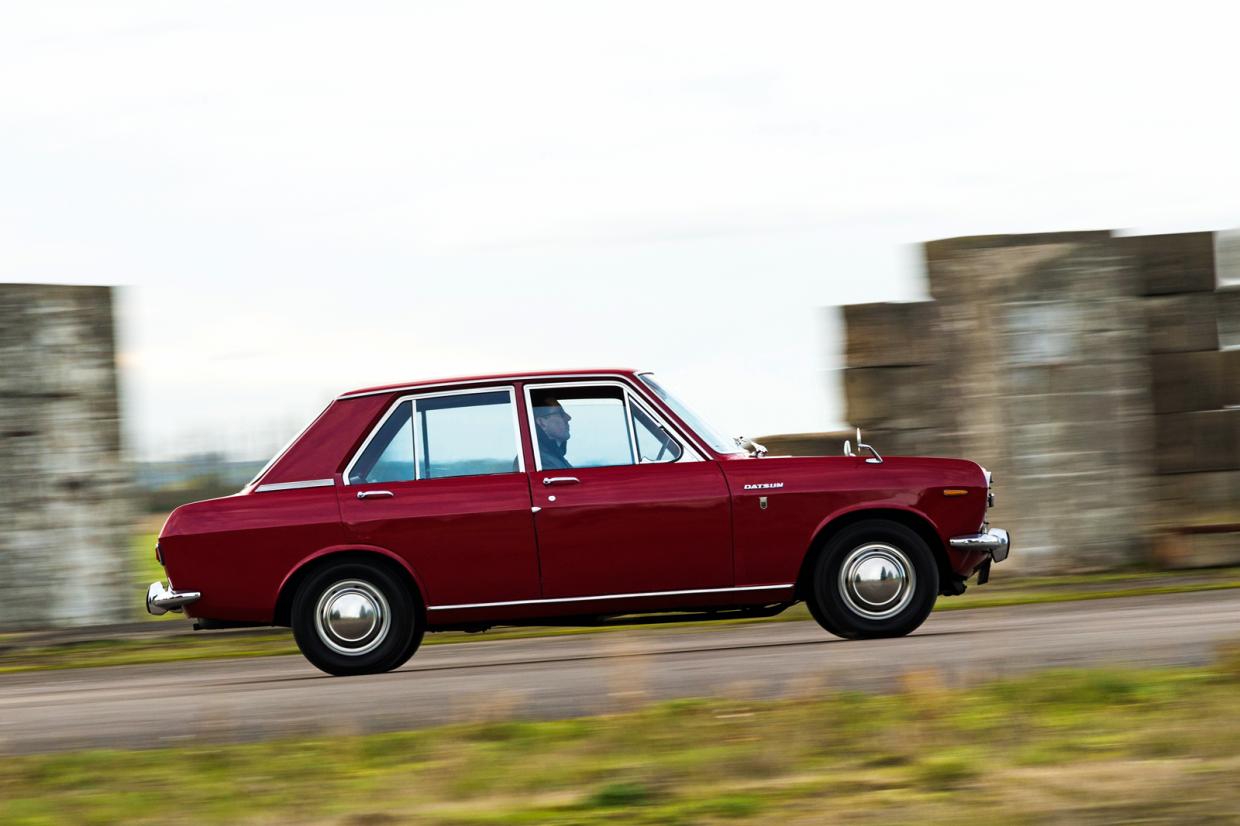 The fourth member in our group will be familiar to anyone acquainted with the Motor Road Test Annual 1969.

The British motoring press extensively evaluated this Sunny 1000 B10 including Car in December 1968, which tested the Datsun opposite the Mitsubishi Colt 1100F beneath the memorably awful headline ‘Some Orientals Analysed’.

There was further evidence that the late ’60s truly was another world in the main image, showing the cars being admired by Japanese tourists to the Tower of London.

The B10 was given its debut in April 1966 as Nissan’s rival to the Toyota Corolla E10; the ‘Sunny’ name was selected in a competition that attracted an amazing eight million entries. 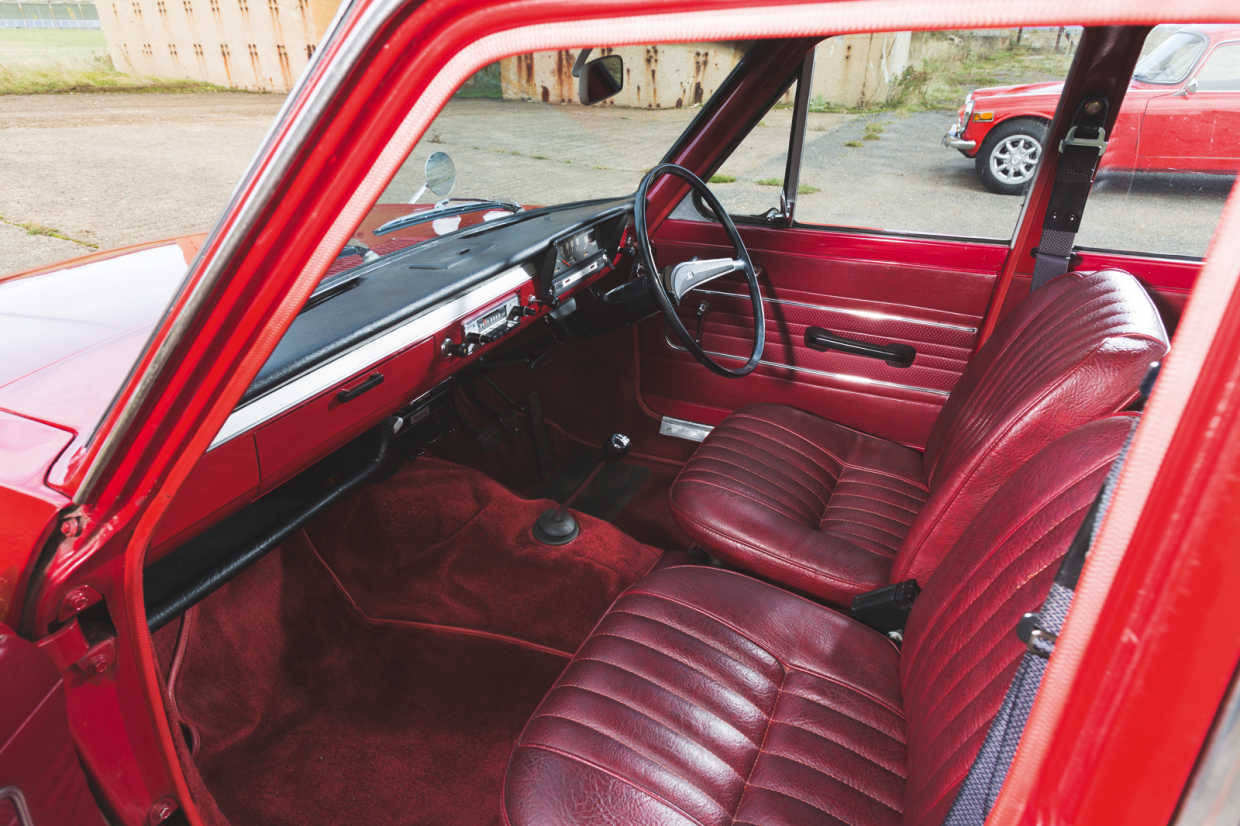 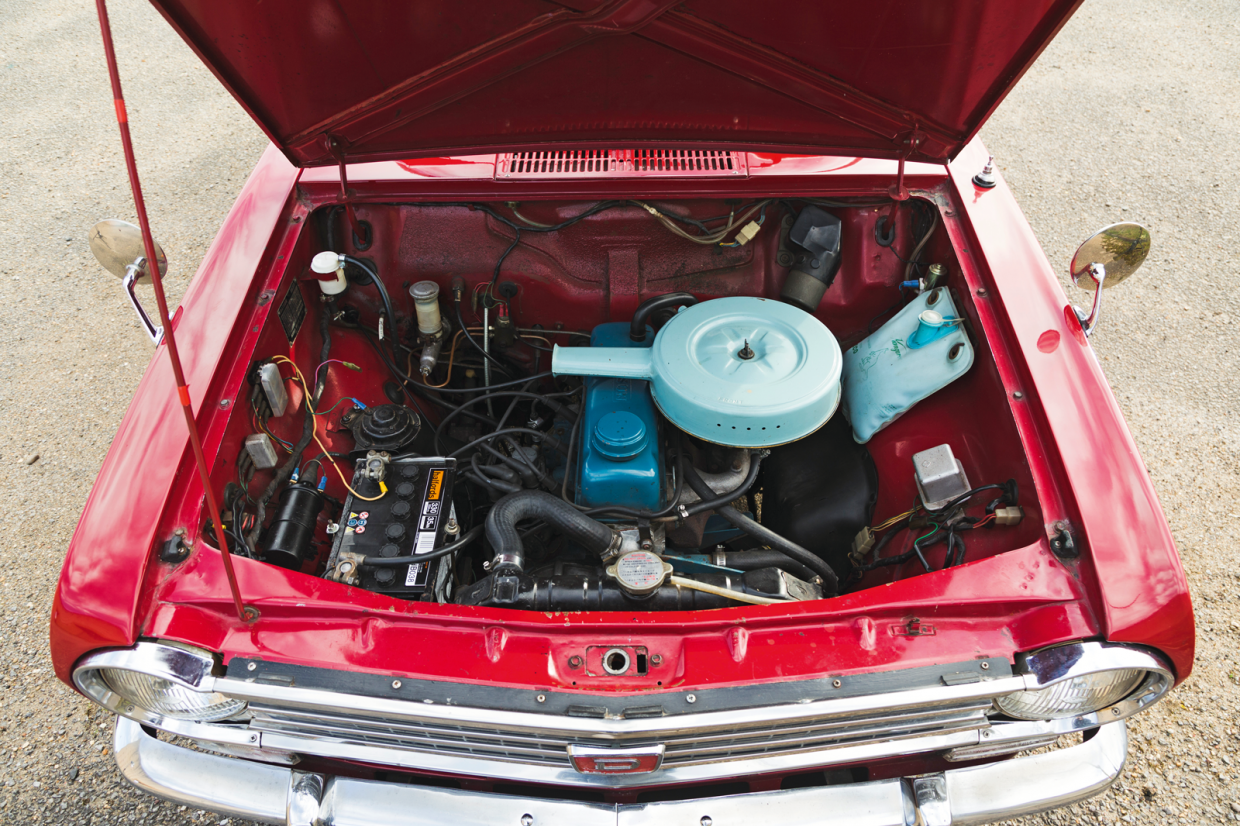 The Sunny has a roomy cabin (left); the efficient Datsun ‘four’ makes 61bhp from sub-1000cc

OKJ 213F is one of a six-car line-up to be imported in June 1968, when the marque was such an unknown that the logbook cites ‘Nissen-Datsun Concessionaires’ (sic) as the Sunny’s first owner.

It is believed to now be the sole British-market B10 saloon on the road, and after leaving the press fleet it was acquired by Rob Tann of AF Tann.

The Datsun remained with the dealership until 2000, when it was bought by the Nissan expert Eddie Rattley, and current owner Mark Ashbridge came by the B10 five years later.

“It has light controls,” he says, “and the gearbox is precise, as you would expect from a Datsun. The performance is quite perky thanks to the light weight and, while there is maybe a tendency to mild understeer, the handling is generally good.” 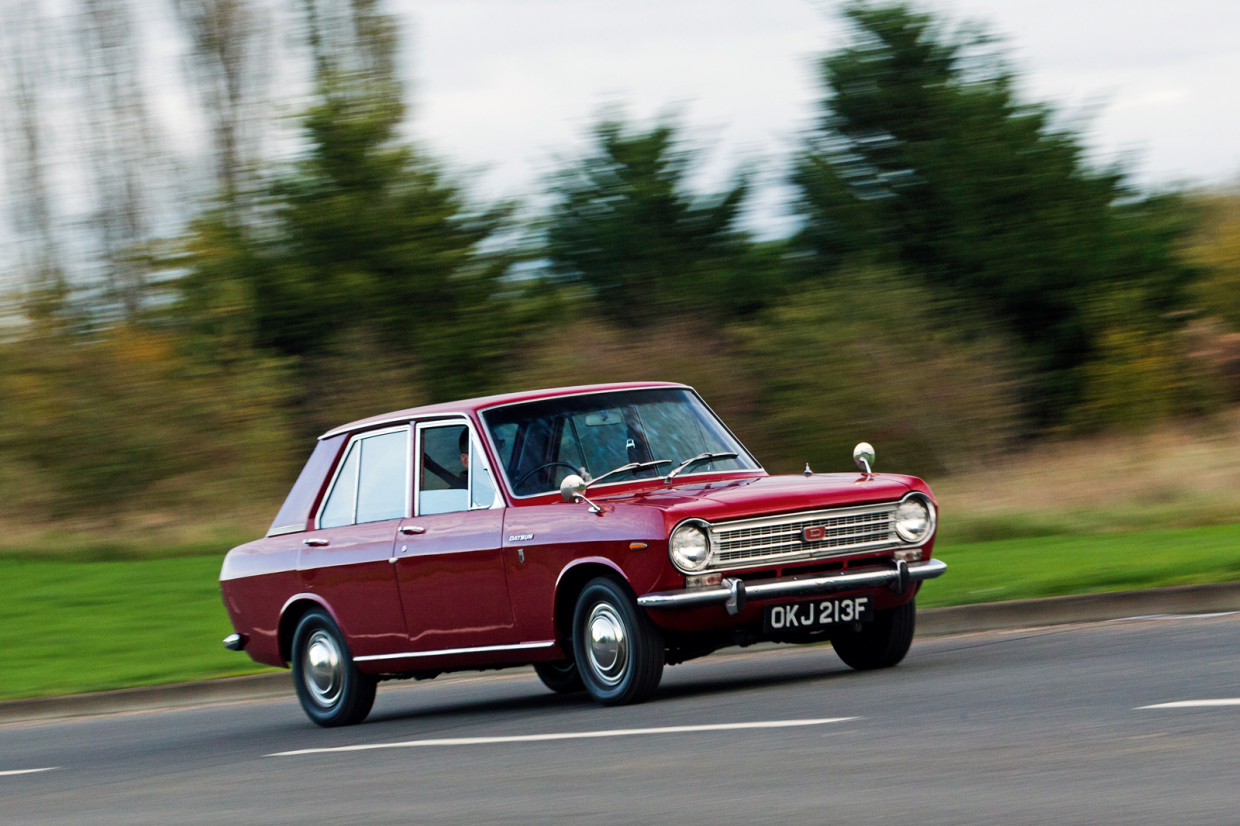 The 1000 is now fitted with radial-ply tyres, a modification recommended by Car to give the Sunny handling in the ‘Escort/Viva class’.

The PR bumf proclaimed the B10 to be: ‘A sturdy, comfortable and high performance “big car”.’

In the metal, the Datsun is a vehicle of remarkable charm. As with the Compagno, the Sunny almost revelled in its conventional engineering but, unlike the Daihatsu, it benefited from a cohesive marketing strategy.

British sales of ‘the £770 car that costs no more’ were around 900, but they provided a foundation for Datsun in this country.

Just three years after the B110-series 1200 superseded the B10, the marque was second only to Renault as a UK importer. 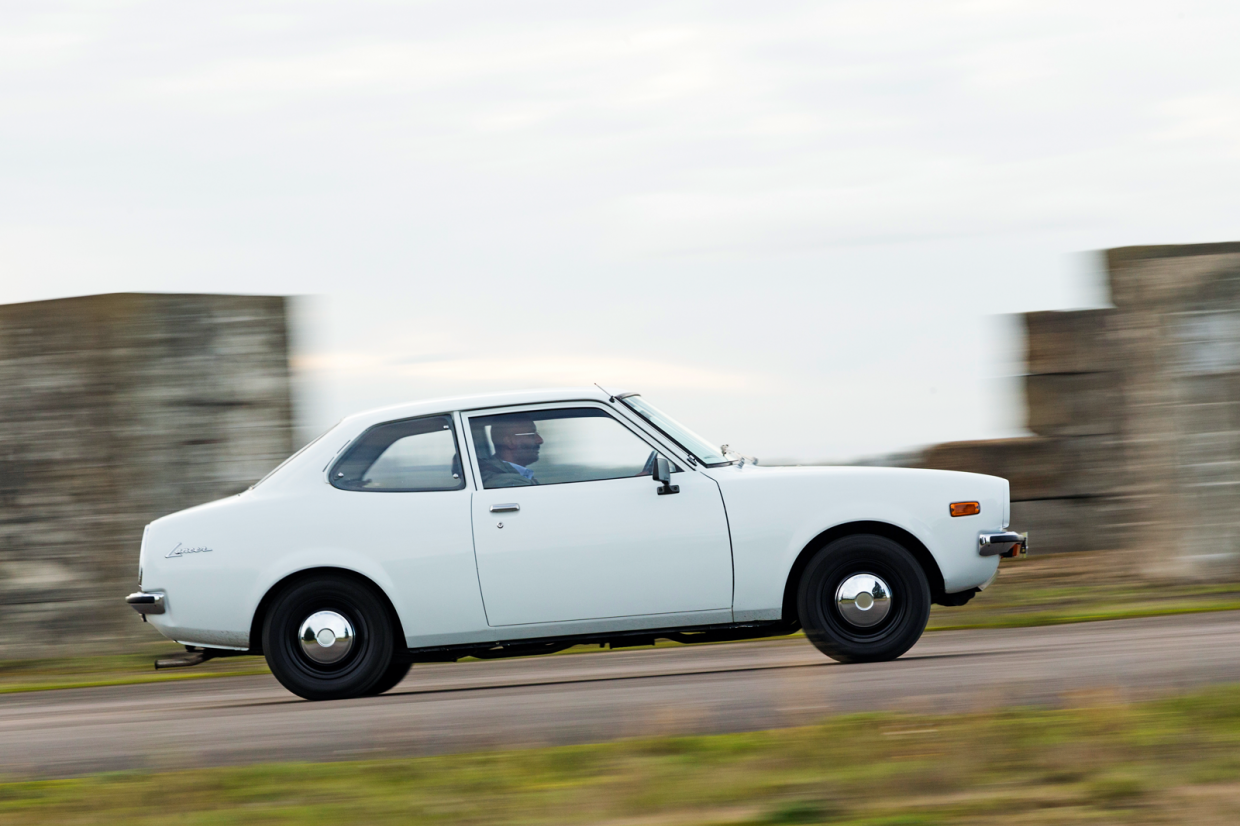 The Colt Lancer was available as a two- or four-door saloon, along with coupé and practical estate variants

Late to the party, Mitsubishi’s original press model dates from 1974.

The 1100F evaluated in the 1960s was only testing the water, but the A70-series Lancer was marketed under the Colt Car Company banner as ‘A Tough New Breed of Car’.

It first appeared in early 1973, and considerable publicity was derived from the Lancer of Joginder Singh and David Doig winning the Safari Rally in 1974 and ’76.

As for the humbler entry-level version, with its 1.2-litre overhead-valve engine, it impressed no less a writer than Car’s George Bishop. 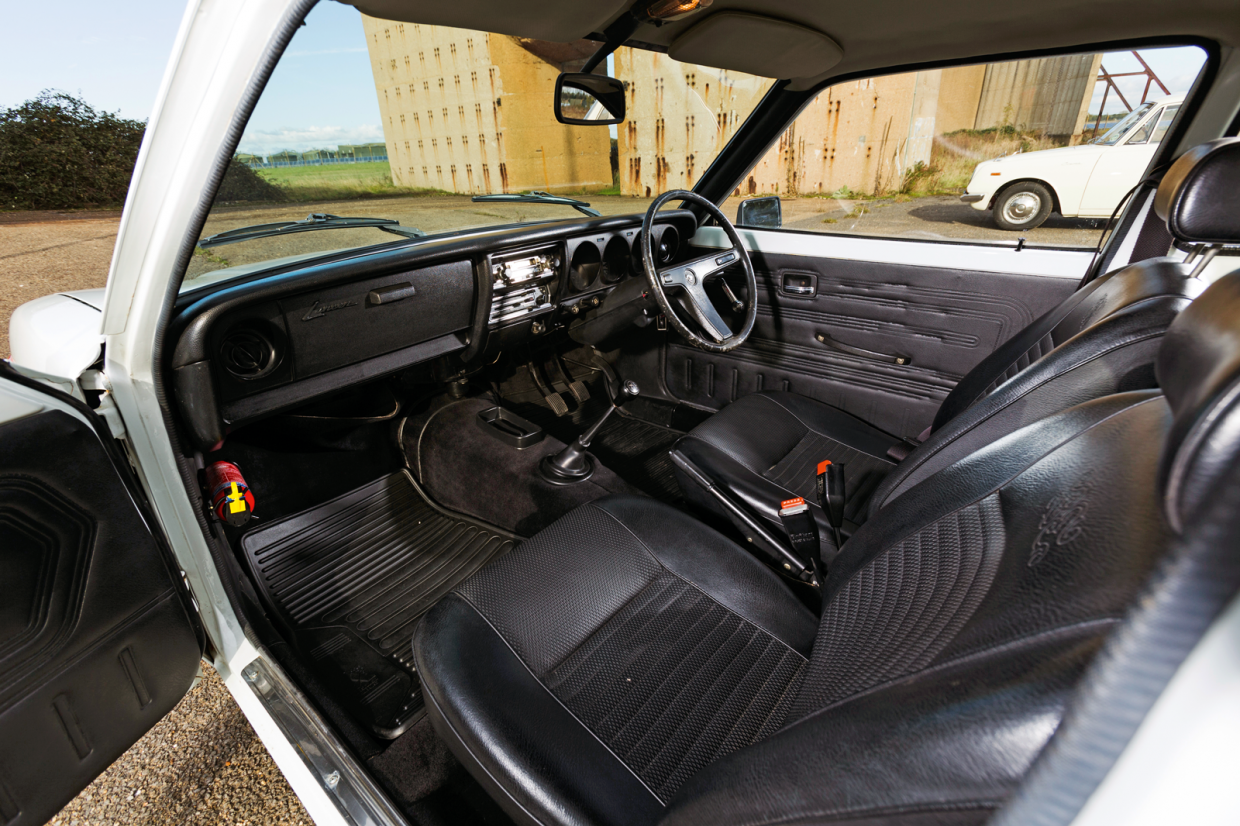 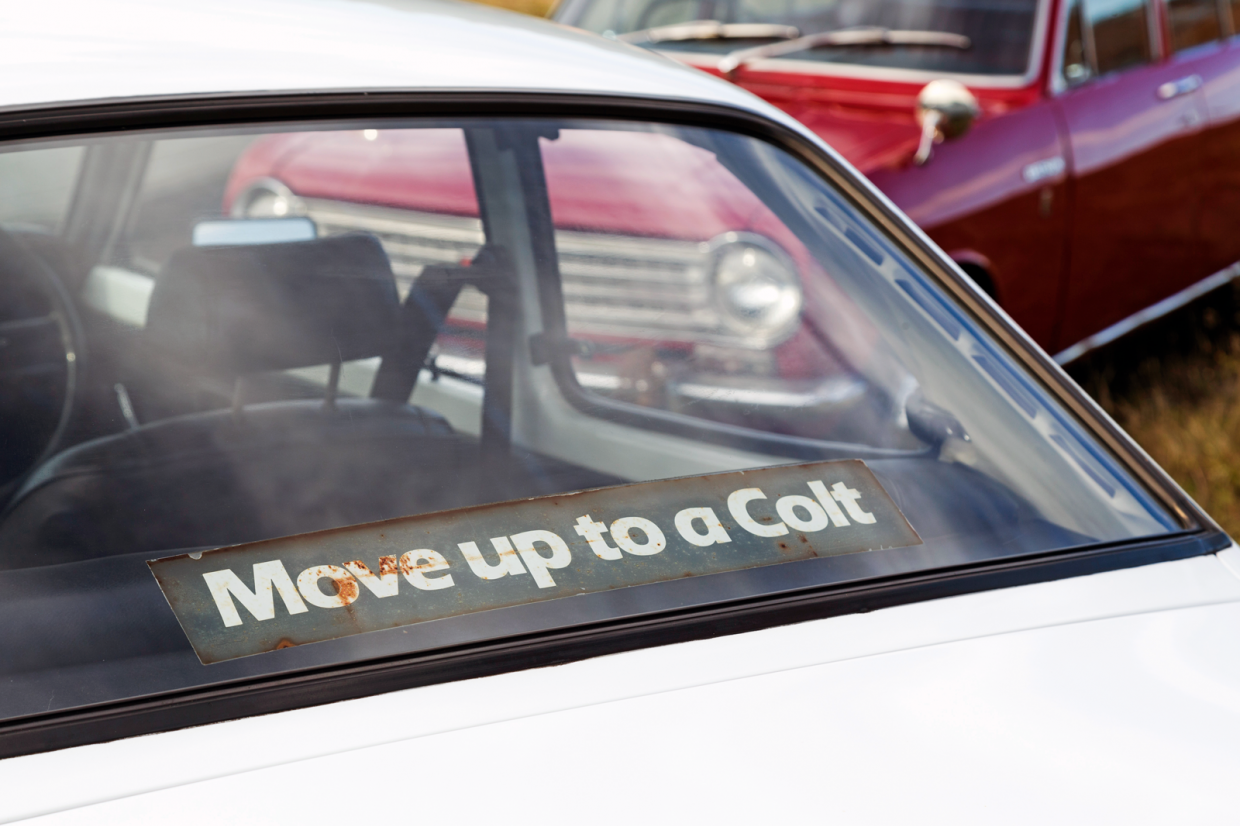 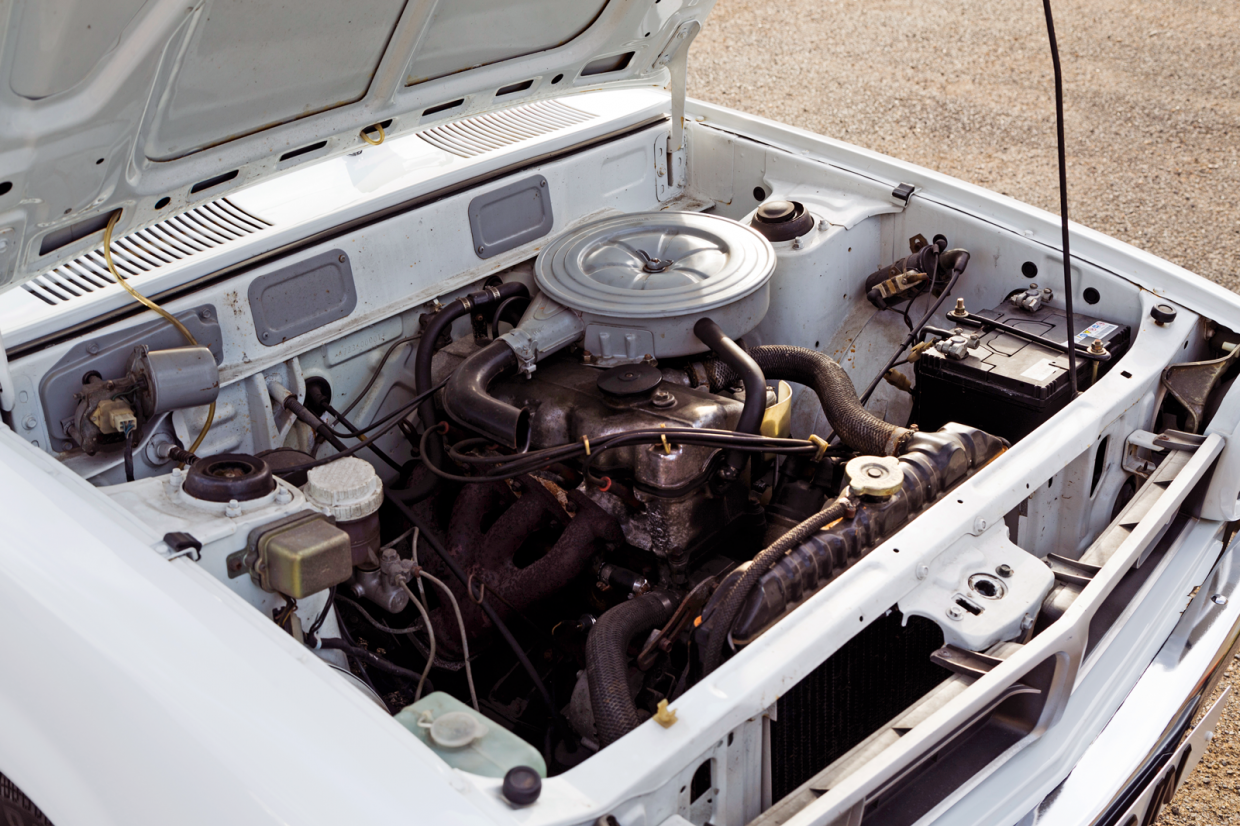 Clockwise from top: the Lancer’s unremittingly black cabin screams 1970s Japanese classic, but it is well equipped; the willing 1.2-litre engine; early Mitsubishis were marketed as Colts in the UK

He regarded the Lancer as demonstrating how: ‘The old way of doing things still works very well for the undemanding everyday driver.’

It was a formula that was guaranteed to appeal to a considerable sector of the motoring public, including those who had become jaded with the innovative (and spectacularly unreliable). 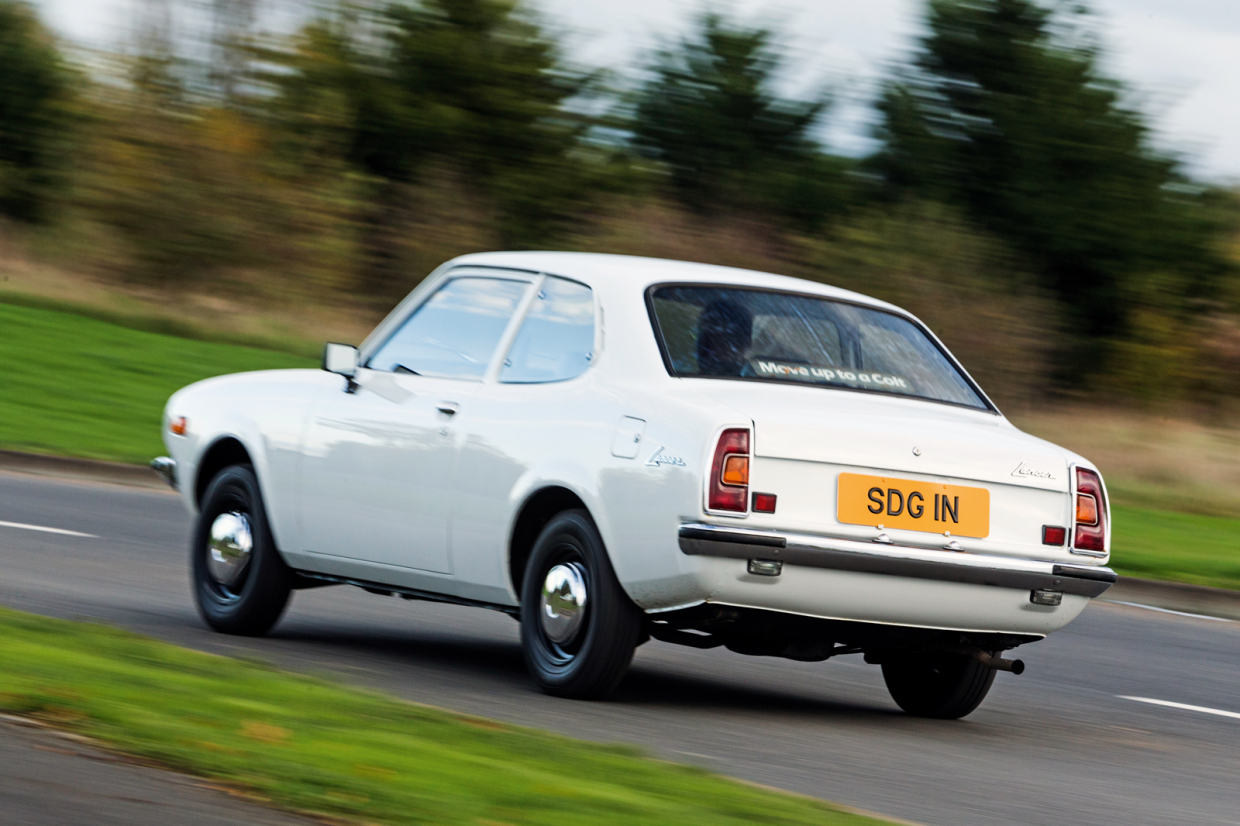 The Colt is quite cute, but lacks a little personality

“There is a remarkable amount to like about the Lancer.”

The coachwork conveys faint notes of Americana, especially around the C-pillars, and the brochure promised: ‘Rugged durability and road-taming performance.’

Most buyers would have been more impressed by the sweet gearchange and the array of fittings that included tilt-adjustable steering. Plus the fact that it would cut a mild dash in the Fine Fare car park. 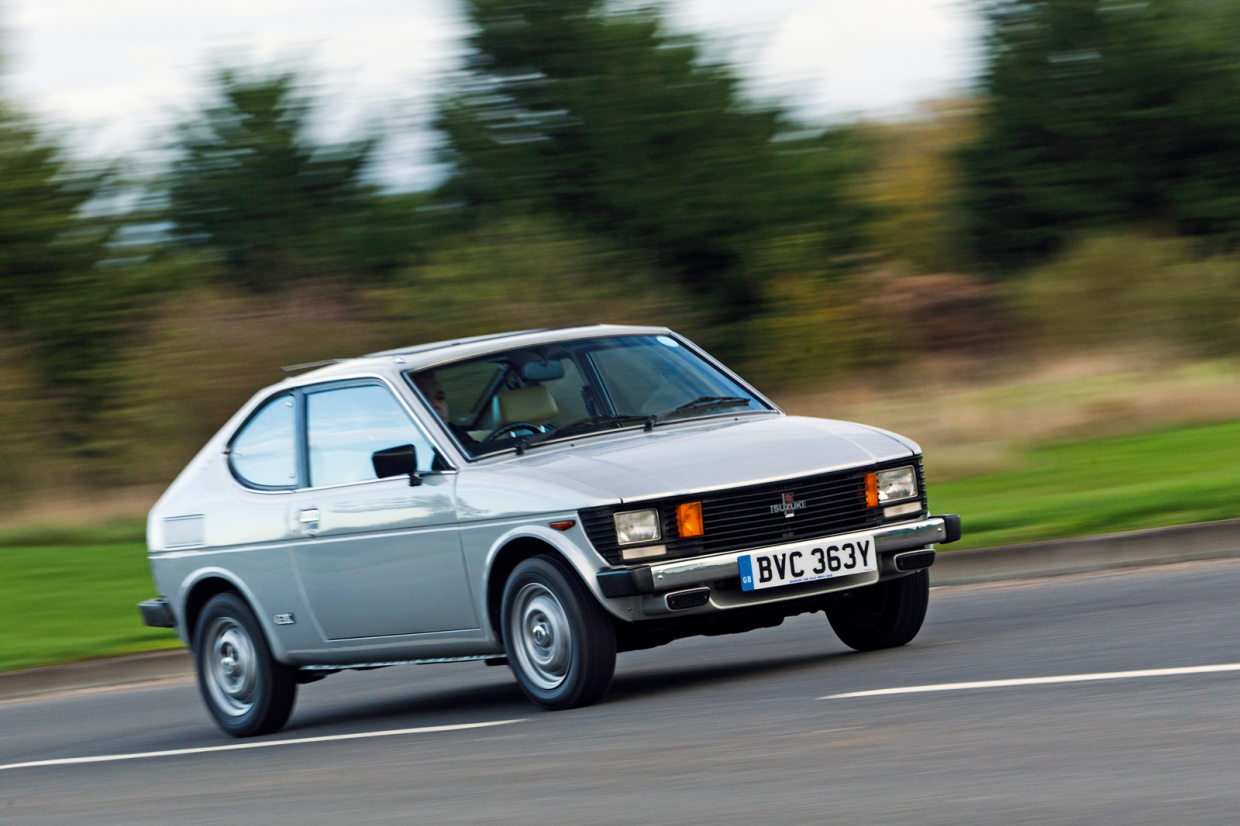 UK Whizzkids came in a limited colour palette with square (rather than round) headlights, shared with the De Lorean

But for sheer cuteness, the Colt can’t hold a candle to the youngest member of our group.

The tiny Suzuki SC100’s dimensions make the Datsun 1000 look Granada-sized – it seems to hover around your ankles.

As its 970cc ‘four’ reverberates across the Buckinghamshire countryside, its surprising turn of speed causes many a startled glance from Mondeo owners, the engine note drawing to mind the frenetic whirr of an out-of-control spin dryer.

Suzuki launched the Giugiaro-styled Fronte Coupé in late 1971, and the Cervo of 1977 continued with the same formula on a slightly larger scale.

British sales commenced in 1979, badged SC100, where the Suzuki was offered only in top-of-the-range GX guise – and marketed as the ‘Whizzzzzzzkid’. 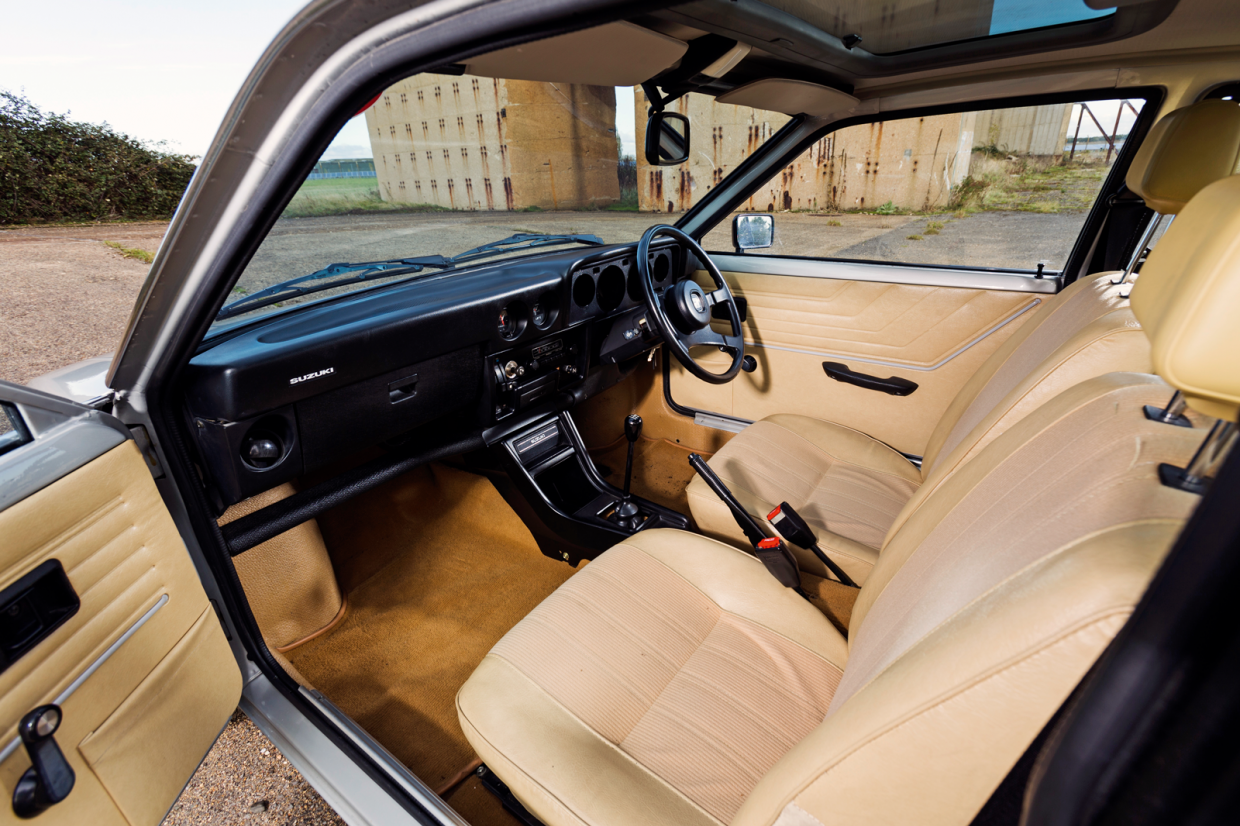 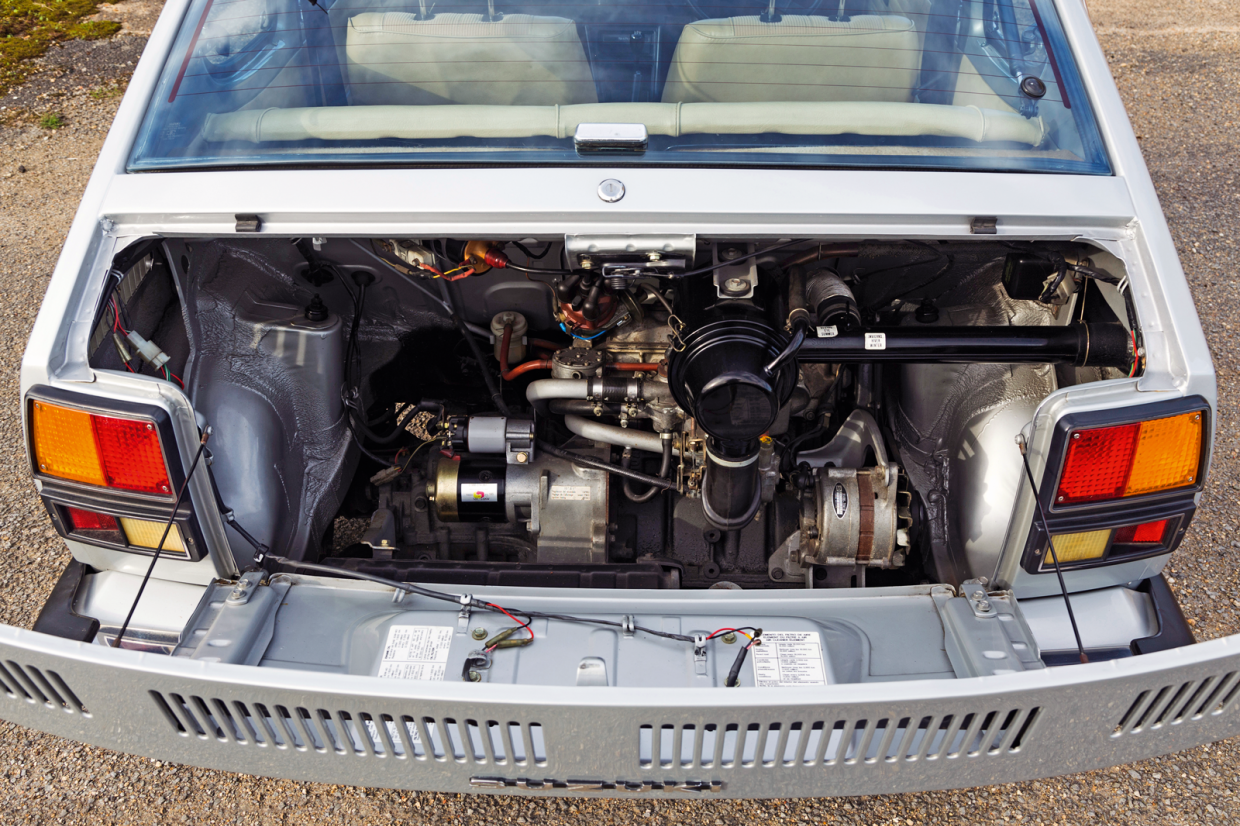 All Suzuki SC100s had beige interiors (left); the sweet-revving ‘four’ was also used in the Bedford Rascal van

To quote Motor: ‘No car we have ever tested has even approached this performance/economy compromise, especially at such a low price.’

The adverts claimed that the Whizzkid was fun, stylish and different, and for once this was not hyperbole.

It especially appealed to those who mourned the impending demise of the Midget, and to would-be 911 owners.

The Suzuki’s top speed might have been more modest than a Porsche, but the layout was similar and it was easier to justify to the bank manager.

Suzuki GB has owned this ex-C&SC Whizzkid since 2003, and head of press and PR Alun Parry enjoys driving it whenever possible.

“The engine loves to rev and the gearing is surprisingly tall. Other road users are often startled by how small it is, and how well it keeps up. I always drive it with the lights on, though, because it barely fills half a lane.” 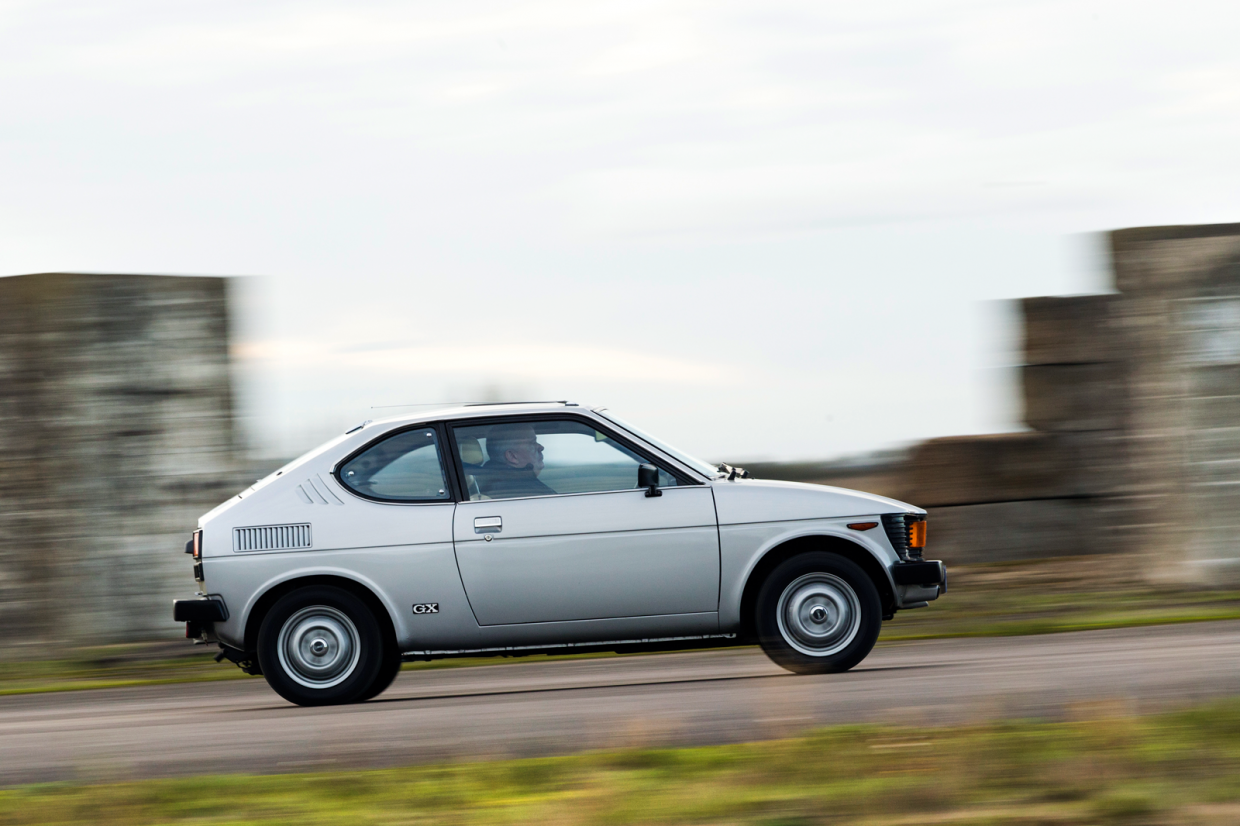 By that time, encountering a Japanese vehicle was as much a part of the daily routine as avoiding Crossroads on ITV.

The curiosity aroused by Daihatsu in 1964 slowly developed into a social revolution, as consumers began to judge vehicles on their own merits, rather than nationality. 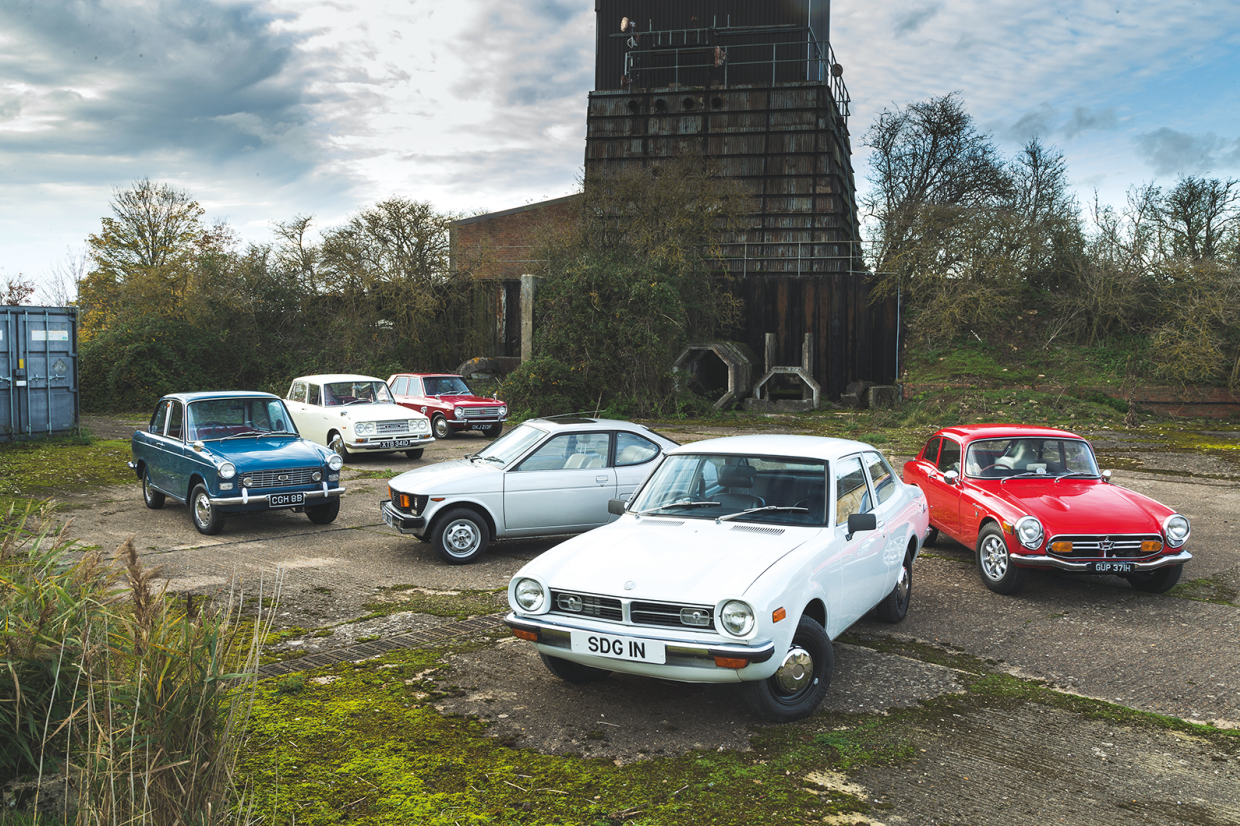