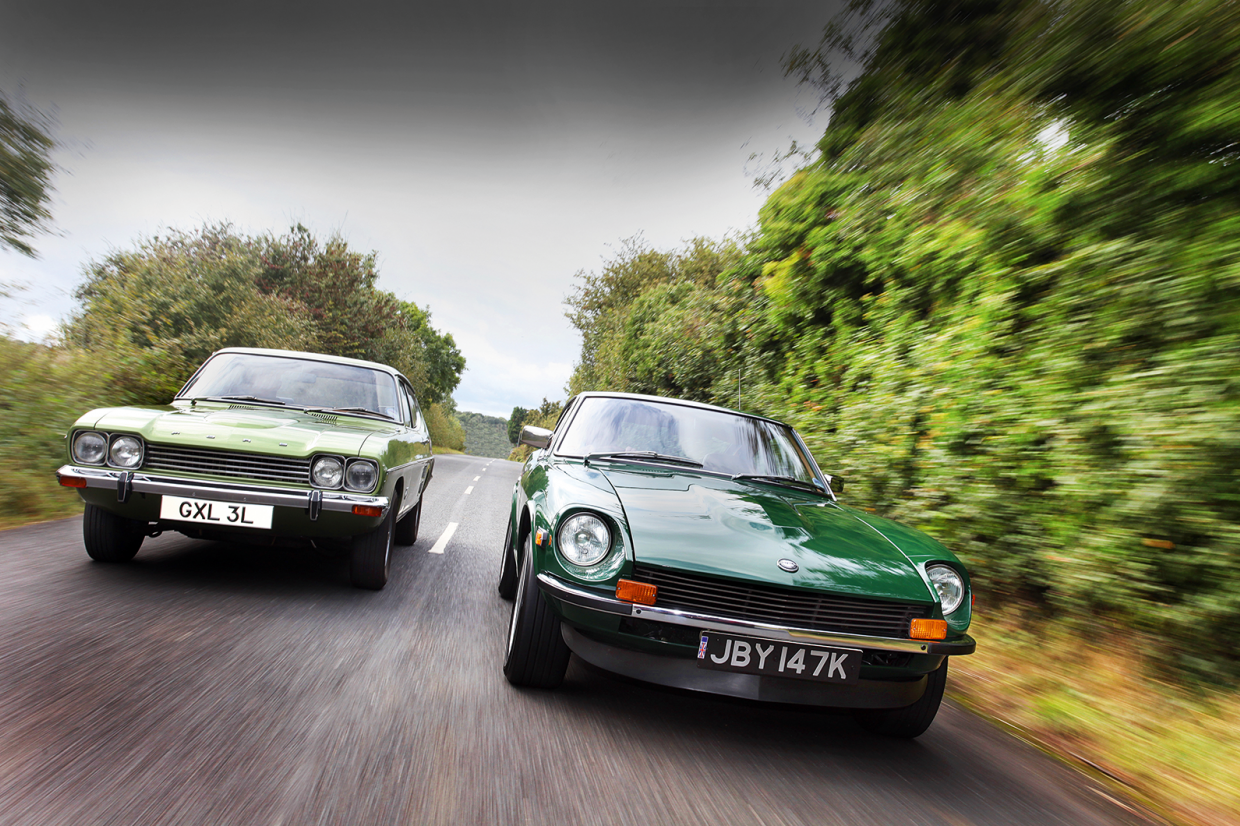 The Datsun 240Z and Ford Capri must have looked very attractive in the wilderness of 1969, two years after the Big Healey had ceased production and 12 months after the demise of the MGC.

By the time the ageing Healey 3000 MkIII gained wind-up windows, separate-chassis designs were passé and expensive to build, and car makers had successfully been getting more experimental with folded metal.

So you can have sporty looks, gruff six-cylinder power and a few creature comforts – including a steel roof? Go on, you know you want to. 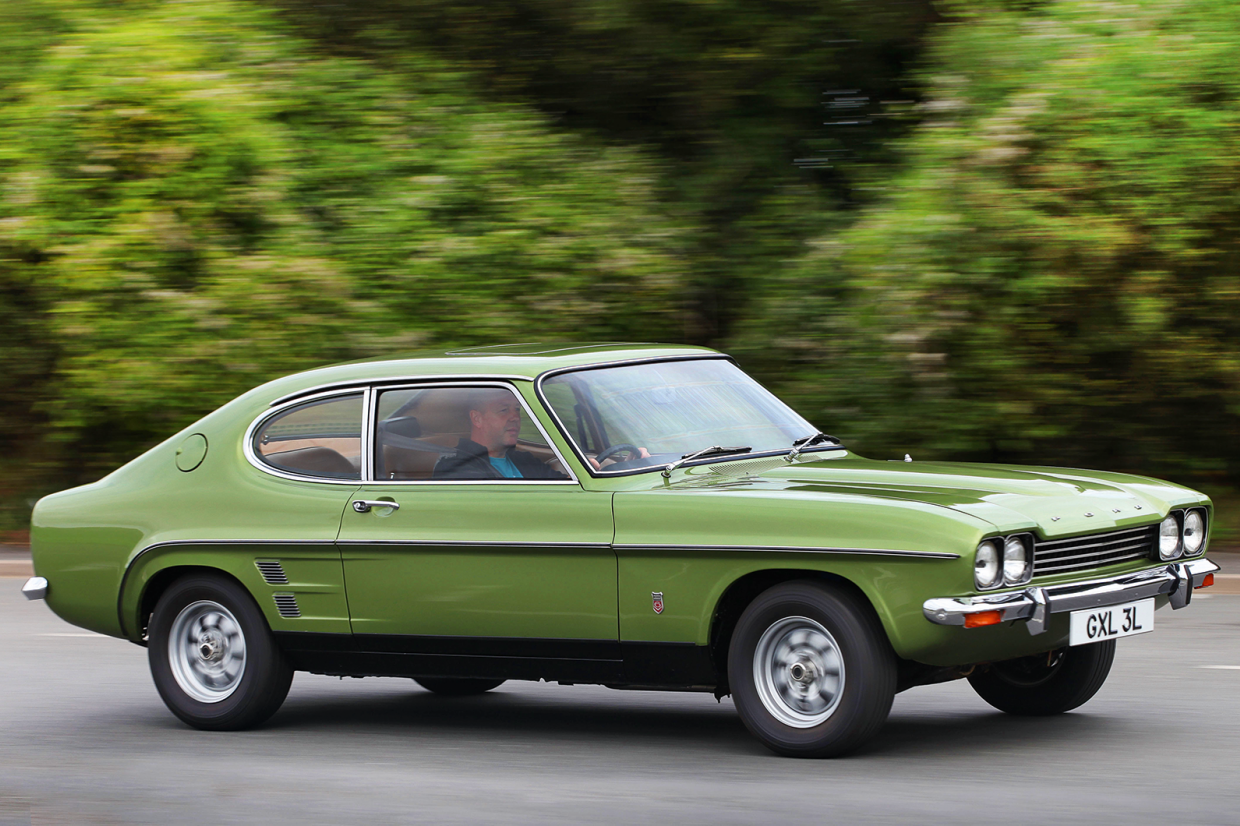 The Capri’s styling was an Anglo-American effort

Though the original Z was a two-seater, the Capri plugged the gap as a natural Big Healey replacement, succour for the middle-aged bloke who couldn’t keep it in his trousers, and for whom a hardtop was a bit of light relief.

With the exception of Peugeot, which has always offered elegant coupé versions of its saloons and hatches, few of the bread-and-butter manufacturers have attempted a standalone glamour model, a ‘personal coupe’ as the Americans liked to call it.

For Ford, the Capri was a no-brainer: an attempt to recreate the roaring success it had enjoyed with the Mustang on the other side of the Atlantic.

Nissan, too, could not ignore that market, for much of the Z’s production run went to North America.

After the men from Dagenham and Coventry had enviously watched the Mustang’s success, Sunbeam got there first with its Rapier, a sharp-looking pillarless coupé on Arrow (Hunter) mechanicals.

Even Reliant beat Ford in the sporty 2+2 stakes, using its own engine in the Scimitar. What would be the Blue Oval’s response? 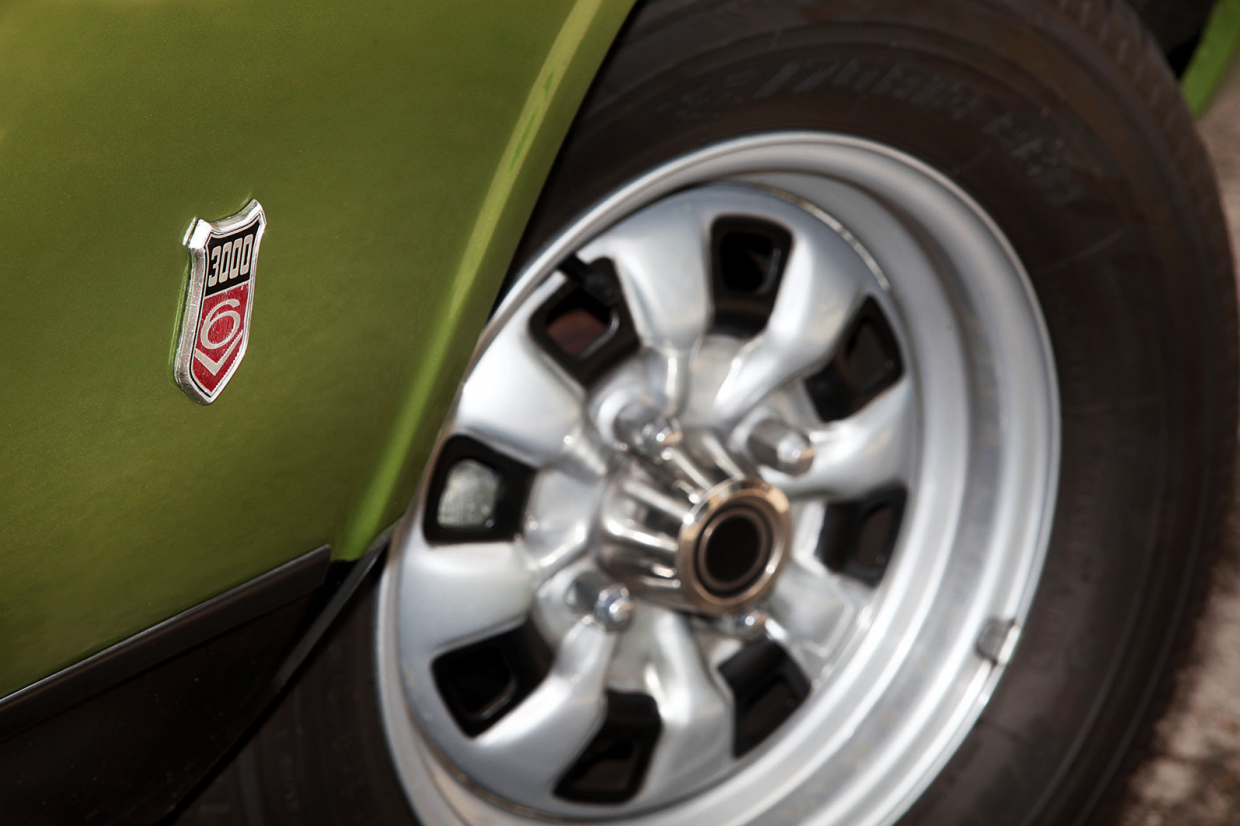 The Capri sought to replicate the success of its Mustang stablemate

The Capri was the first car to come out of a new, integrated Ford Europe, the closer co-operation ordered by Henry Ford II.

Its long-nose, trimmed-rump profile had been seen before on the big Harley Copp-styled Zephyr saloon, but this was more successful, its wild detailing pure 1969.

Yet it was definitely a British effort, under the watchful eye of the parent company. America sent sketches by Gordon Mackray, one of which translated almost unchanged into the frontal styling.

The recessed transom with Escort tail-lights was settled fairly early, but the rear window design with its rounded glass was finalised only at the 11th hour, giving the Capri its most distinctive feature that stayed with the model for life.

Basic styling cues, such as the length of the bonnet and the dummy side scoops, all suggested potency and power. Even the strange hockey-stick side moulding somehow didn’t look out of place, though it would never have worked on the slab-sided replacements.

But the Mk1’s weird uniqueness of conflicting curves suggests a raw muscularity that only the V6 cars can properly back up with their blaring, off-kilter buzz. 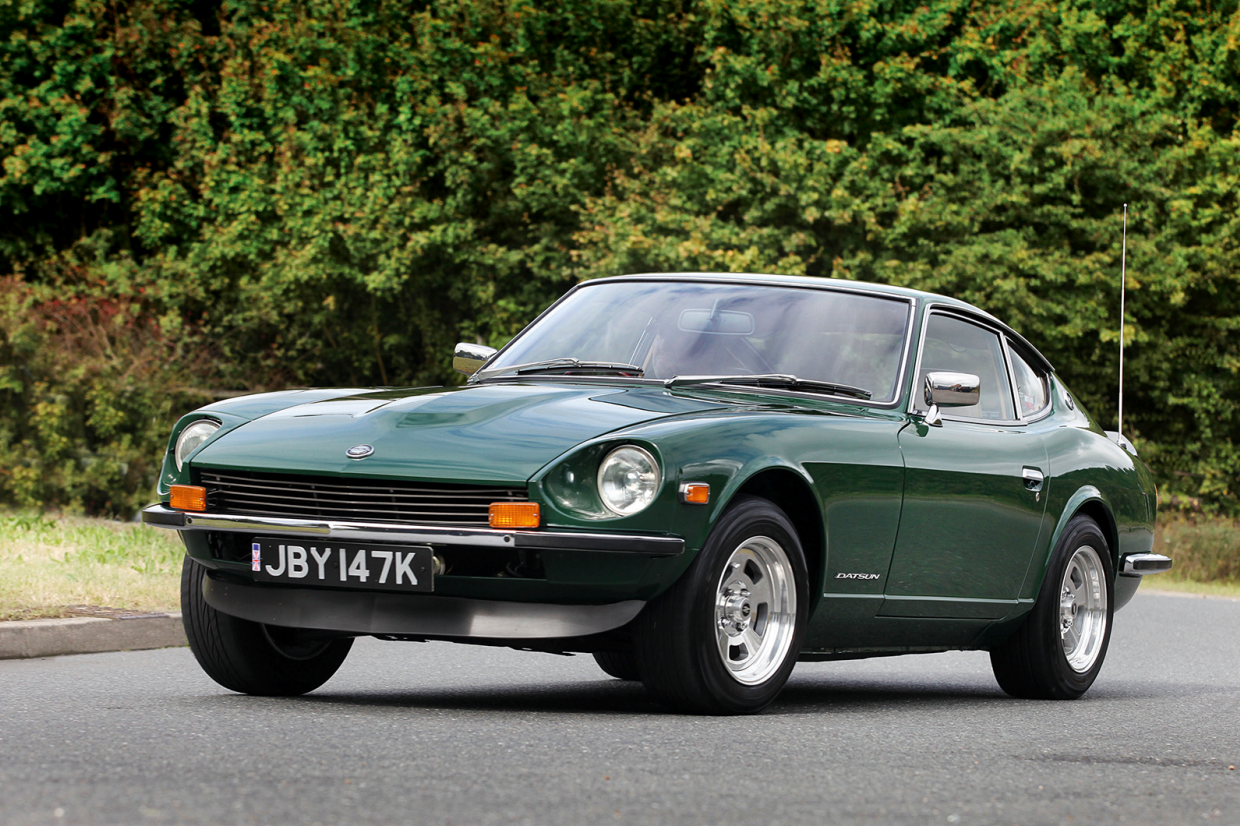 The 240Z feels more responsive than the Capri

The Z was a new departure rather than a straight replacement for the original Fairlady Roadster, which was, in effect, a Japanese copy of the MGA and B.

For years the design was attributed to Count Albrecht Goertz, then working for Yamaha, but in reality it was styled by a team led by Yoshihiko Matsuo, head of Nissan’s Sports Car Styling Studio.

The Z’s inspiration may well have been the Toyota 2000GT of 1965 – which it superficially resembled and which has also been attributed to Goertz – though that Yamaha collaboration was only ever made in small numbers.

Both of these cars look best from the rear three-quarter angle, though the Z has a shark-like sharpness
at the pointy end, in contrast to the Capri’s slightly bluff front.

And, while the latter runs a bit of good old Ford negative camber at the front, on the Z it’s the rear wheels that tend to lean inward at the tops.

The Capri’s a good 6in longer, too, despite its V6 being shorter than the Z’s bulky straight-six, which means there’s a lithe sleekness to the tightly wrapped Z that’s absent from the Ford, though it’s only 60kg lighter. 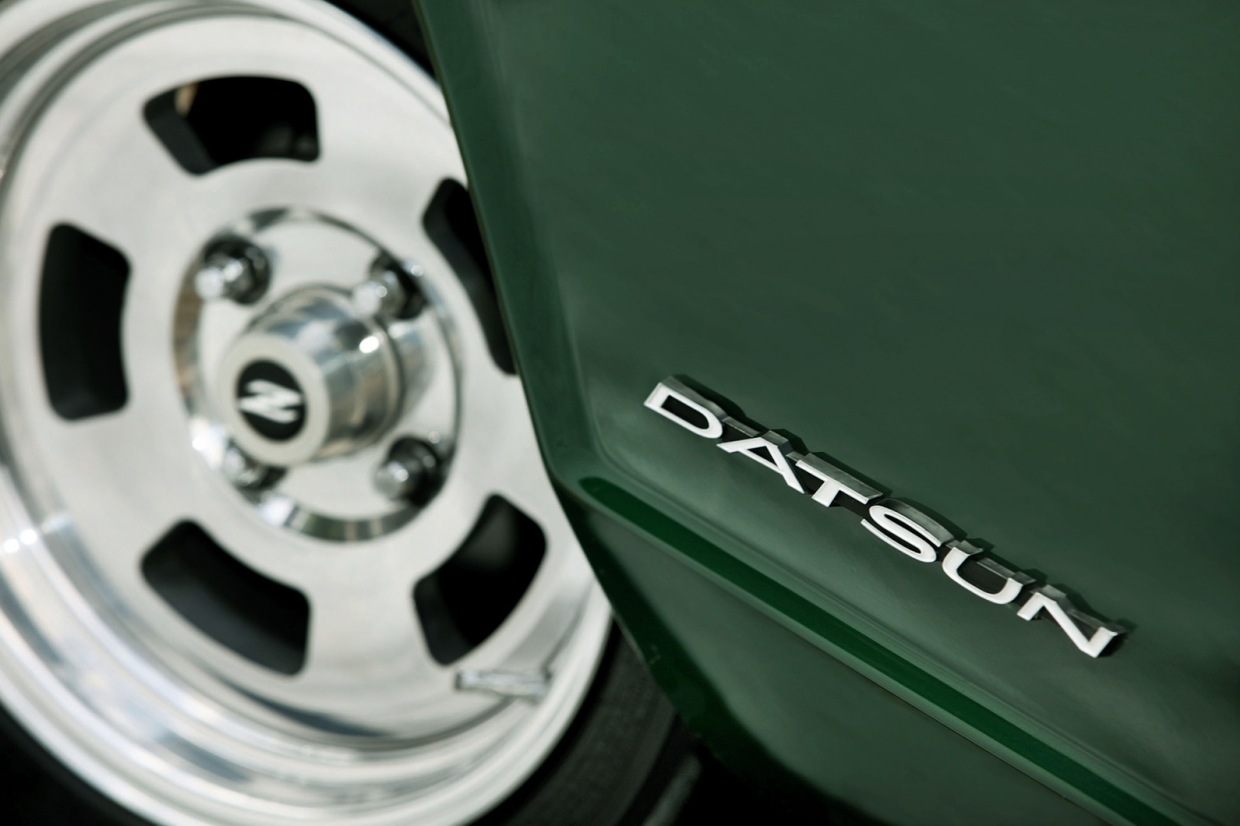 When new, many Zs found homes in North America

The Capri’s wheels are the sculpted steels that superficially resemble Minilites; earlier cars had Ro-Styles.

The Datsun always came with steels, covered in lurid silver-edged black plastic wheeltrims. Most owners discarded these and changed to alloys, though these period items are now highly sought-after.

There’s a lot of parts-bin engineering in both of these cars.

The Capri is mostly Mk2 Cortina underneath, but with clever staggered rear dampers to combat axle tramp, the same wheelbase as the Corsair and an Escort steering rack (and tail-lights on the Mk1s); the Z uses Laurel front suspension.

Both are powered by existing engines, the 240Z employing the seven-bearing lump from the Cedric.

This handsome and imposing alloy-head ‘six’ uses the Mercedes-Benz system of operating two rows of valves by rockers under the single central overhead camshaft.

The design was later copied by Ford for the Pinto, which eventually went into the Capri in 1974 to replace the V4 (itself more or less two-thirds of its bigger brother).

Ford’s pushrod V6 is so compact as to be almost invisible, buried well back in the spacious engine bay under air filter and ancillaries.

It first saw life as a 2½-litre unit in the MkIV Zephyr Six in 1966, an extension of traditional Ford practice. The only real innovation, apart from the layout, was the use of a fibre timing gear on the camshaft to reduce noise.

It’s heavy, though, a legacy of the plan to offer it as a diesel, which never reached the market place. 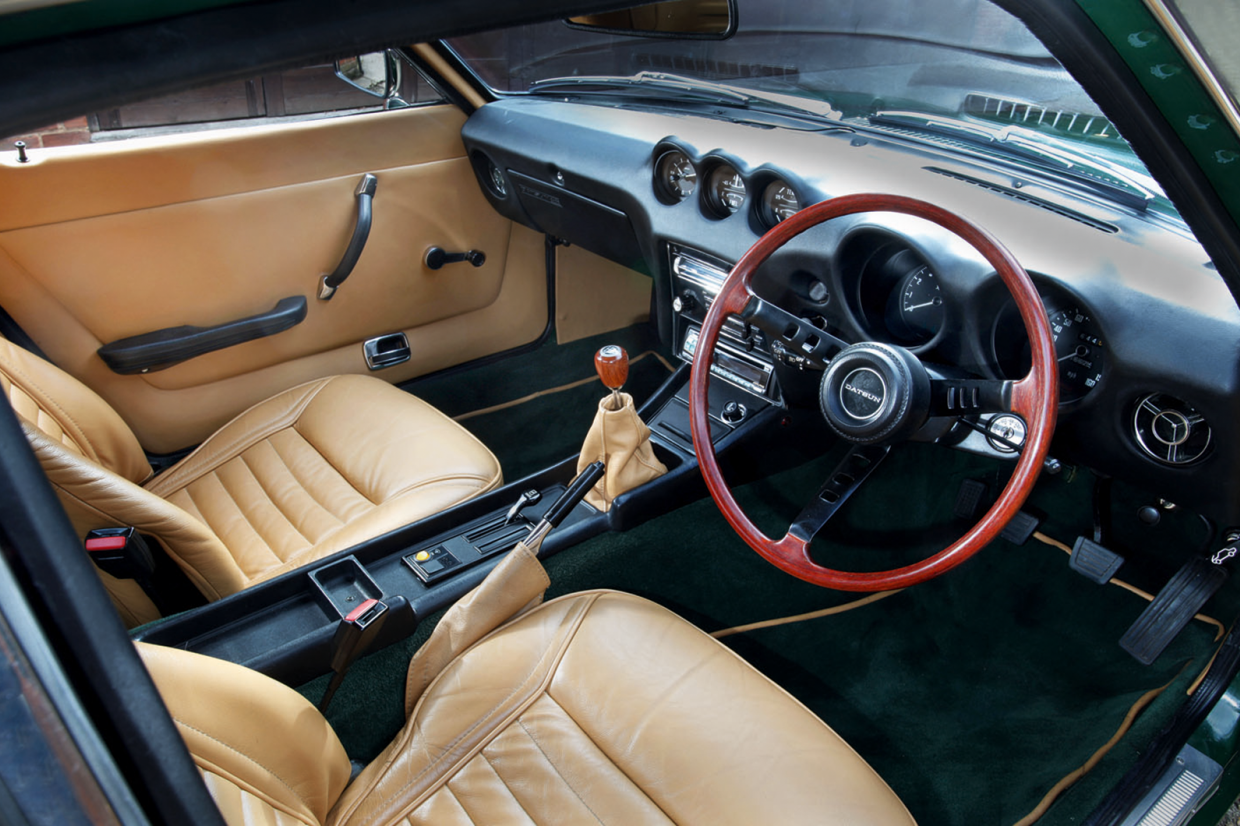 Both have claims to be ‘world cars’. The Capri was made at Halewood, Genk, Saarlouis, Cologne and Homebush, Australia, and sold in the USA as a Mercury.

The Z, though only ever manufactured at the Nissan Shatai plant in Hiratsuka and known in Japan as the Fairlady Z, was sold everywhere.

As befitted cars competing at the top of the prestigious coupé market, both are well equipped with, for example, six-dial dashboards – a carry-over from a time when people worried about oil pressure and expected their sports cars to give plenty of feedback.

Each has a big, clear rev counter and speedo, plus smaller gauges for water temperature, oil pressure, fuel level and an ammeter.

The last four are combined into two round double-dials on the Z in a three-row cluster at the top centre of the dash, Cortina 1600E-style.

The Capri still reads amps at a time when Ford was moving to battery-condition gauges on hot Escorts. There’s a 160mph speedo on the Z, a more realistic 140 for the Ford, and full marks for clarity on both. 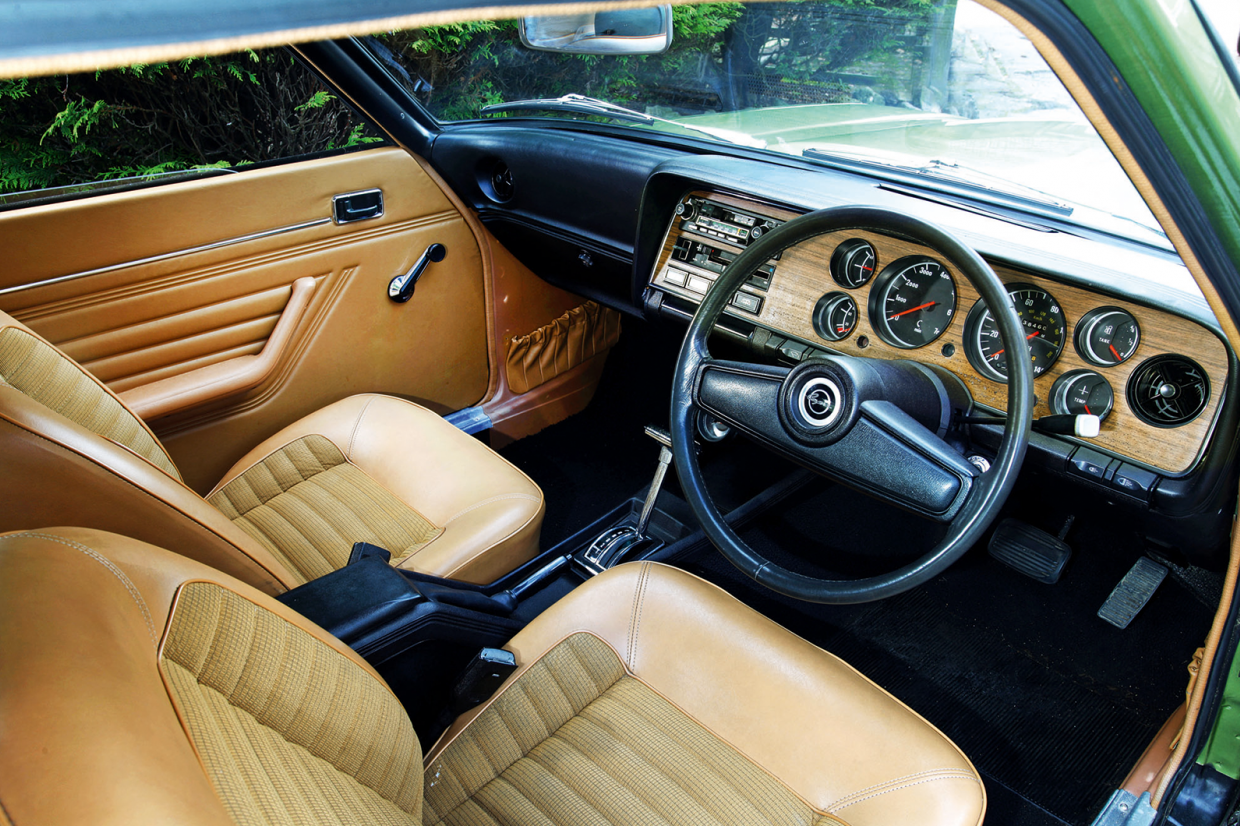 The Capri has a spacious and airy cabin

The facelifted Capri, however, is let down by a dull plastic-wood dashboard, the architecture of which was carried through to the last 280s.

They both, praise be, have the indicator stalk on the right, so you can indicate while changing gear, but secondary functions such as lights are on a row of push-switches on the Capri, where they’d already migrated to a stalk on the Z.

The Datsun’s cockpit is more intimate: you feel as though you sit deeper, more tightly hugged by both seats and doors, peering down tunnels to the deep-set instruments.

The choke is on the centre console, pre-dating the Rover SD1. And the view out is remarkably Stratos-like, with the top of the windscreen and roof intruding into your vision like a Bell helmet.

The Capri feels spacious and airy inside in comparison, but, however thick and heavy the Z’s rear pillars look, they’re not intrusive. 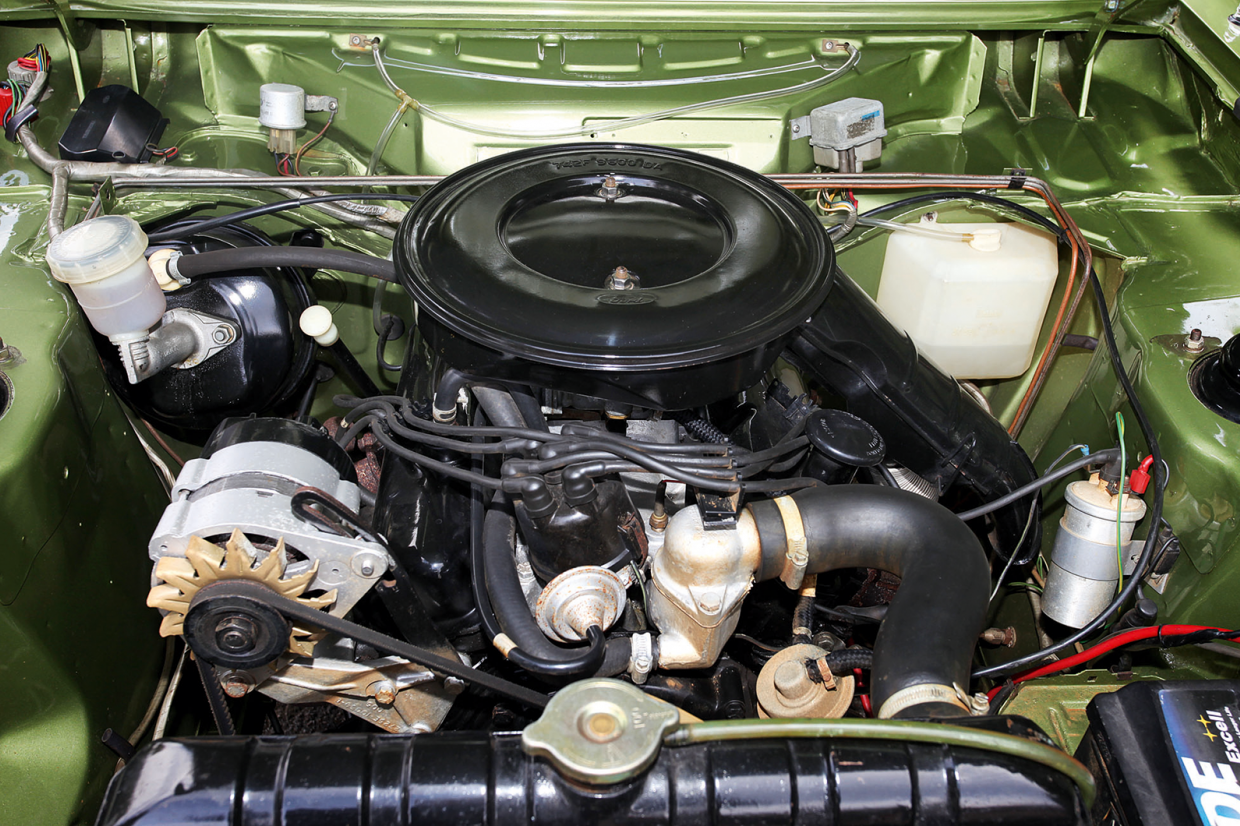 By 1974, after 1,172,900 Mk1s had been built over just five years, the Capri caught up with the Z, receiving an opening rear hatch for the first time – just as, in turn, the Datsun caught up with the Ford and offered occasional rear seats in the 2+2 version; both cars lost some of their looks in the process.

The Mk1 Capri makes do with less boot space than the smaller Escort (part of it is taken up by the fuel tank), and it’s accessed via a narrow slot.

The Z has a decent luggage volume that, though constricted somewhat by the rear strut towers, offers space for large squashy bags and comes complete with Ferrari/Aston-style hold-down straps.

Both have excellent access to the engines beneath long bonnets; on the Z the fluid reservoirs and battery are under separate secondary flaps, and a lead lamp comes clipped to the right inner wing as standard.

And with their muscular styling and eager-sounding powerplants, these coupés promise much. 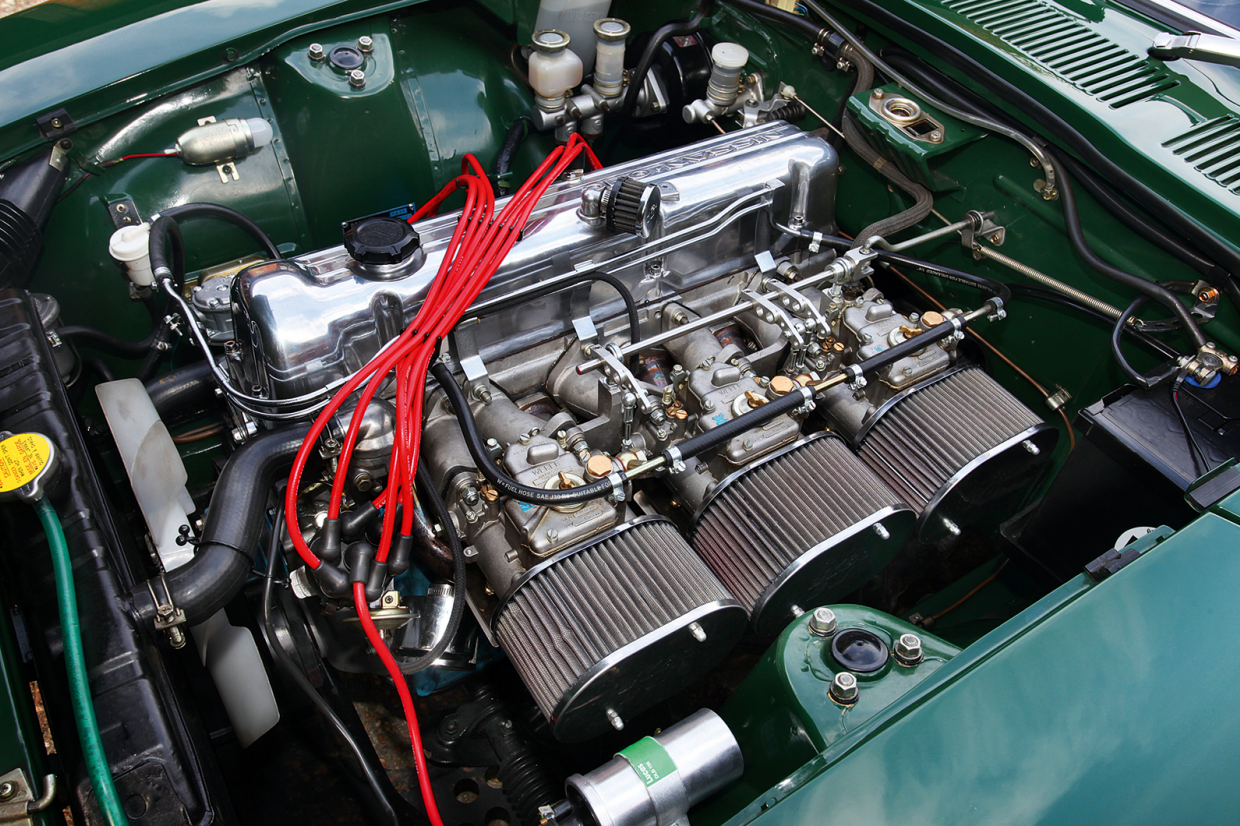 The Datsun wants to rev – the factory recommended a 7000rpm maximum. That would have meant rods in the sky for the Essex V6, a loose-sounding animal that doesn’t want to know much about anything over 5000rpm and is redlined at 5800.

The Datsun starts to pull hard at 4500rpm, and by 5000 its straight-six wuffle has been topped by a glorious yowl that gets sharper the higher you go.

The Capri rumbles, sounding more dangerous and deranged the harder you push it.

But its torque makes up for the lack of revs, more than the subsequent 2.8 injection models, and it’s faster than it feels, its taller rear-axle ratio compensated for by the Z having larger 14in wheels, which these days are easier to get decent rubber for.

It’s easy to wrong-slot the gears in the Datsun’s narrow five-speed gate – a four-speed manual was available, as was an automatic option.

The manual Capri suffers none of that, its rod-change four-ratio ’box having a longer, heavier throw than either the Datsun or the famed single-rail unit that you can find in Escorts, Cortinas and smaller-engined Capris.

On this automatic version, of course, you simply leave it in ‘D’, yet manually holding the gears shows that the V6 will rev past 4500rpm – even though it tries hard to convince you that it doesn’t want to.

There’s little point in exploring the upper reaches of the thrashy powerplant; you’re better off letting the torque do the work.

Being nose-heavy, they both have an initial tendency to push the front into corners, though they can be tightened up with a bit of throttle to make them bite better, the Capri needing more of a stab.

The Ford has a tendency to spin its inside rear wheel before the tail snaps sideways – a limited-slip differential wasn’t standard until the 2.8i Special – while the Z is more responsive, taking mid-corner attitude adjustments much better on its all-strut suspension and generally being lighter on its feet.

This particular car has received some engine upgrades so its reactions are more pronounced, but the chassis handles the extra power well. 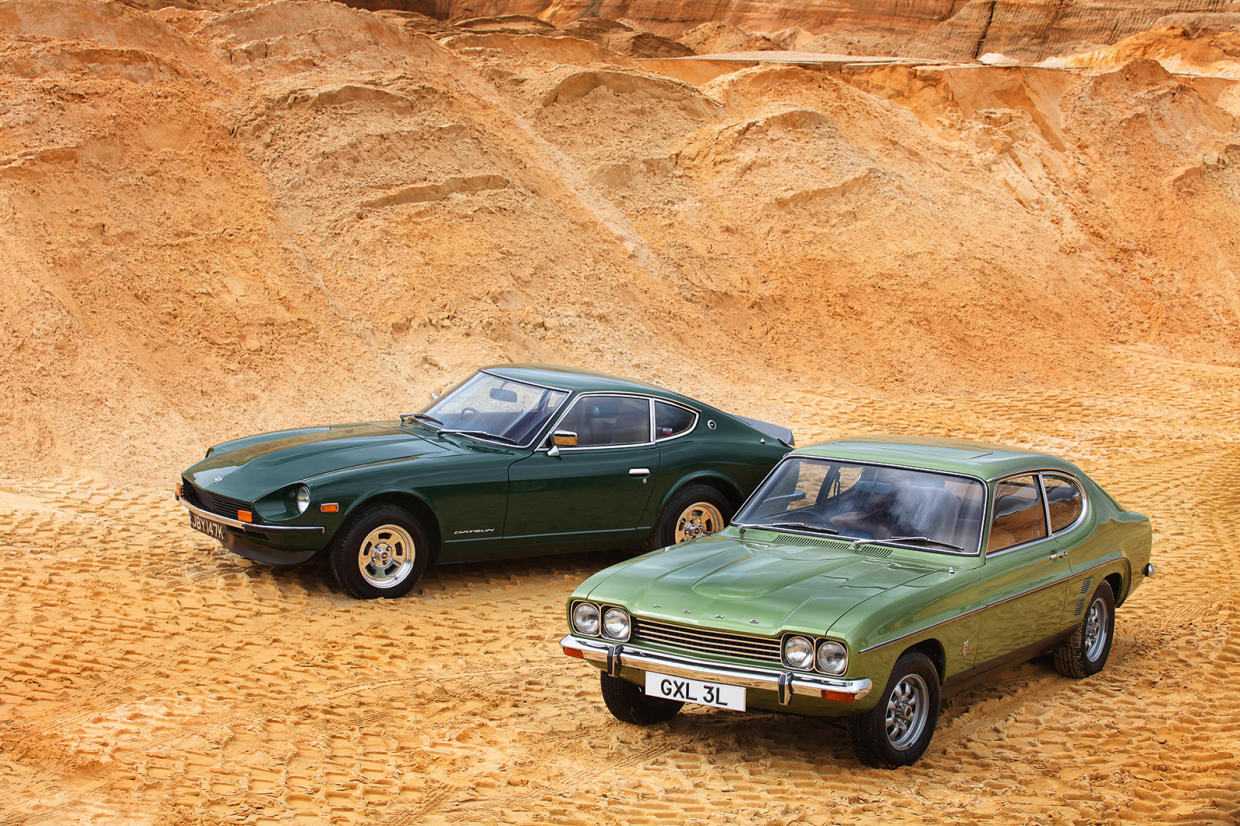 240Z or Capri? It is a six-cylinder conundrum

Overall, the Datsun feels the more considered piece of engineering, with a sophisticated make-up and thoughtful touches all round, while the Capri seems engineered to a price.

Nissan was feeling its way and needed to impress in an unknown new market; the robust Ford was built simply to do a job.

The British coupé is a solid institution but it’s the Z that stands out as the car that broadened the image of Japanese vehicles beyond their econobox models. 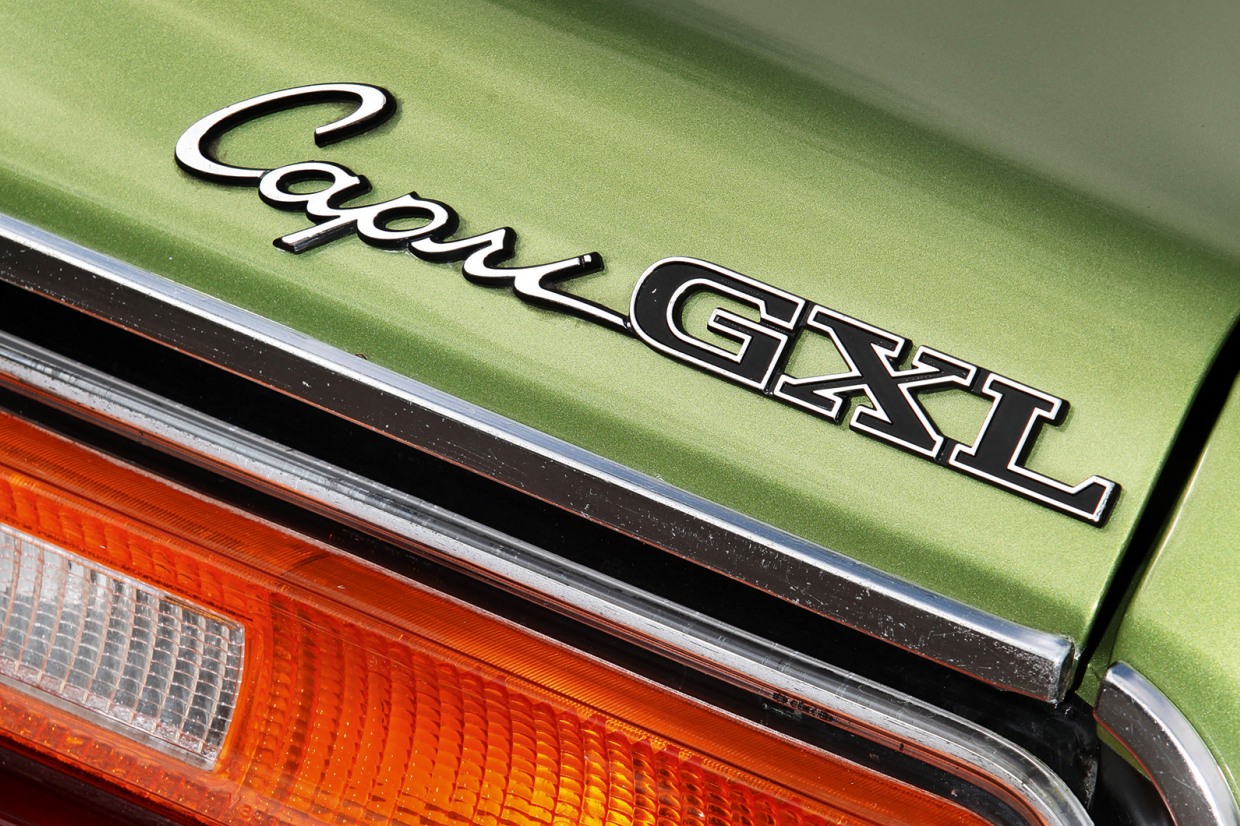 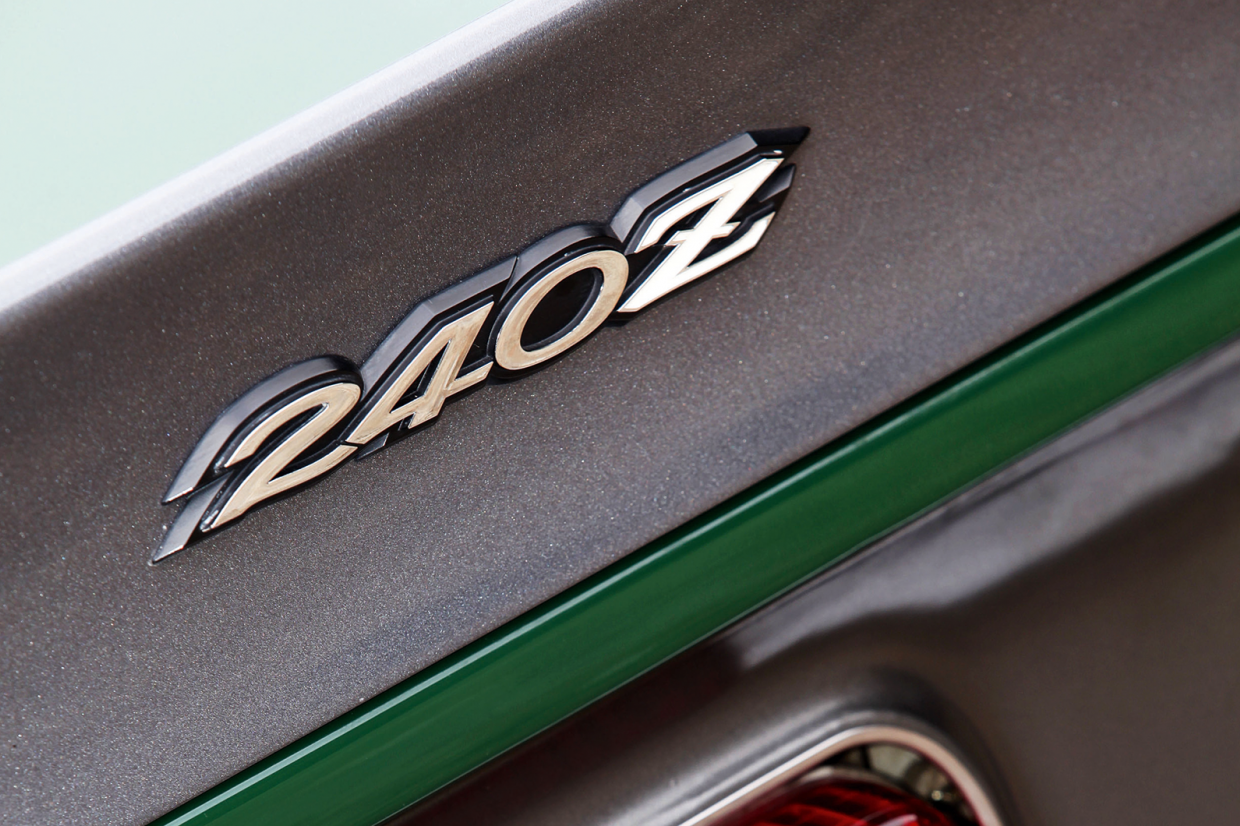