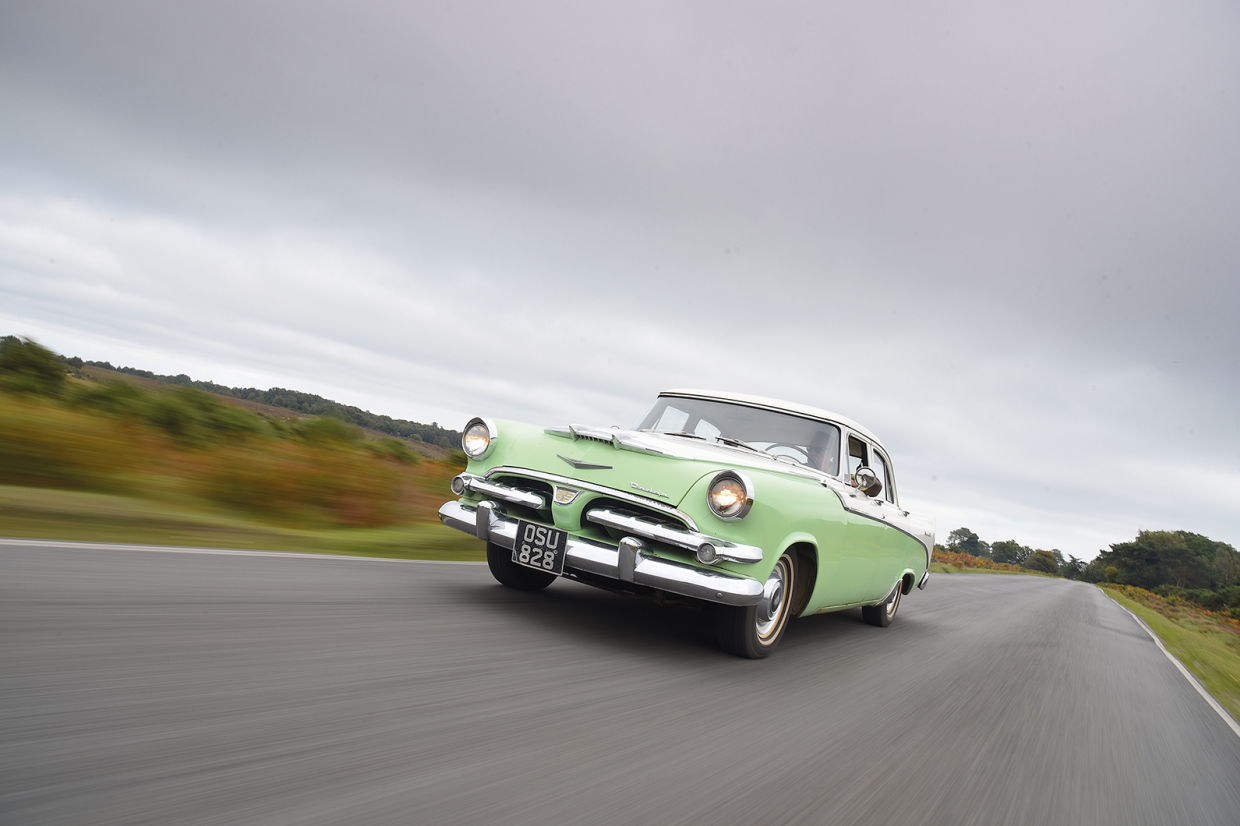 By its keeper’s own admission, the 1956 four-door Dodge Coronet is hardly remarkable in the pantheon of 1950s American automobile styling.

This example isn’t even in amazing condition, but for its owner, film critic and musician Mark Kermode, that’s not the point.

“Every time I get in the car, it makes me smile,” he says. “It’s almost become a mantra in the family – if I’m being miserable, my wife Linda will tell me to go for a drive in the Dodge.”

It’s well worn and far from pristine, yet has been a member of the Kermode family for more than a quarter of a century. 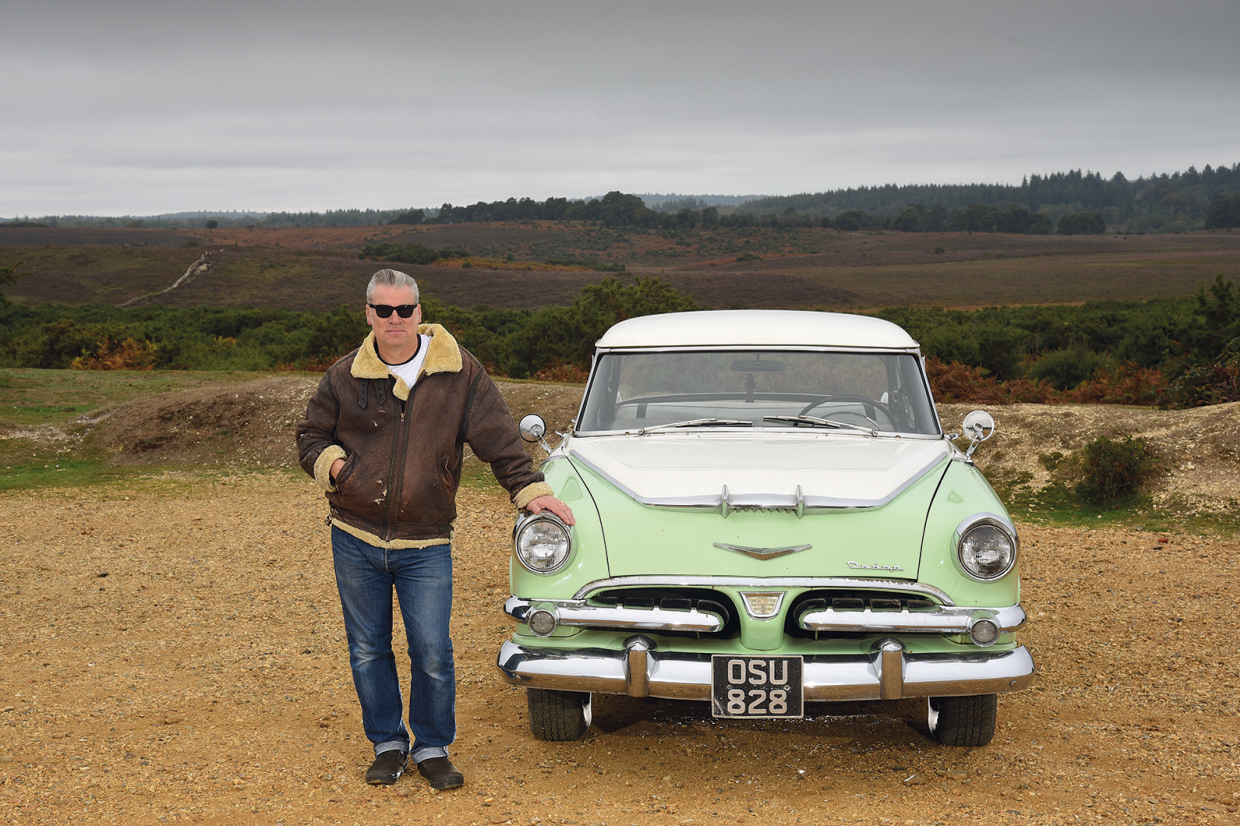 As was the way back in the 1950s and ’60s, American manufacturers tried to retain the basic style cues of their cars for two years rather than just one, hence the ’55 and ’56 Dodge look pretty similar to the casual observer.

Study them today and, with the advantage of hindsight, you can feel every bit of Chrysler stylist Virgil Exner’s frustration with the suits upstairs.

The 1956 version in particular is that halfway house where it is neither car nor spaceship.

Exner threw trim at the body to try to create the low-line look he was really craving, yet the roof is still high, a throwback to the days of a gentleman needing to be able to keep his hat on while driving, and the fins are apologetic compared to the ‘Forward Look’ that his team aspired to and achieved so brilliantly with the 1957 models.

There is, however, plenty to amuse the driver. Power comes from a 315cu in V8, known as the Super Red Ram and that, fed by a two-barrel carb, produces 218bhp and 309lb ft of torque. It’s coupled to an automatic gearbox with novel, dash-mounted pushbutton controls, referred to by Dodge as ‘the magic touch of tomorrow’.

Six decades later, the Coronet delivers enough performance to compete with modern traffic, even if its fuel consumption doesn’t. 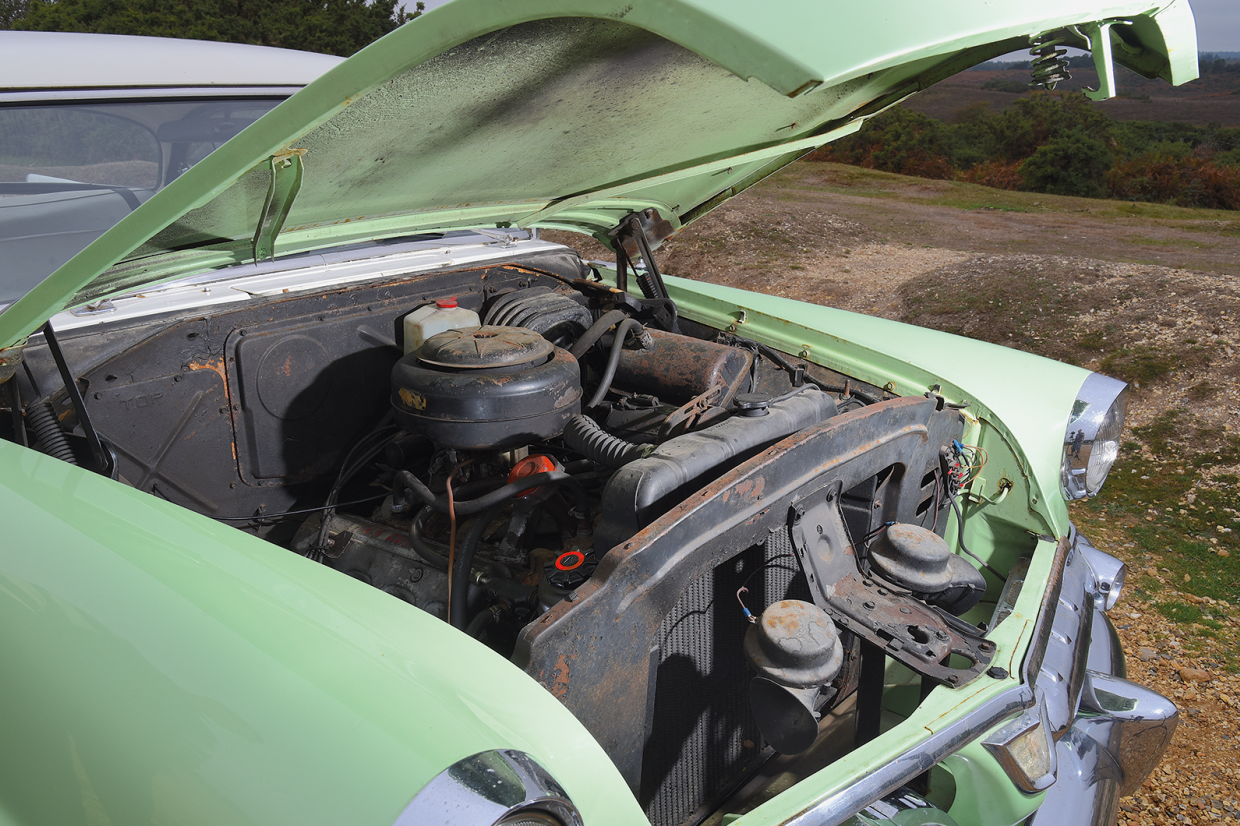 Car and driver were united in 1993: “Linda and I had just got married, I’d got a gig at BBC Radio 1 and we were living in Mornington Crescent. All we needed was a big old gas-guzzler to ride around in!”

The newlyweds didn’t have to wait long. As they were walking up Camden High Street one day with another couple, the Dodge wafted past.

It was love at first sight and the ‘for sale’ sign in the rear window was all the encouragement Kermode needed: “My mate Bob and I performed a pincer manoeuvre in the one-way system and managed to memorise the phone number. I rang the guy the next day and paid the asking price without haggling.”

The Dodge was part of the tidal wave of dry-state US imports flooding into the UK at the end of the ’80s, this particular example coming from an Arizona family.

Although impulsive, the £3500 purchase wasn’t entirely naïve. “I’d been reading American car magazines and had some idea of values,” Kermode remembers.

The car had been resprayed by the vendor – its first UK owner – who replaced the rather sickly yellow below the beltline with a peppermint green, the top half remaining white. 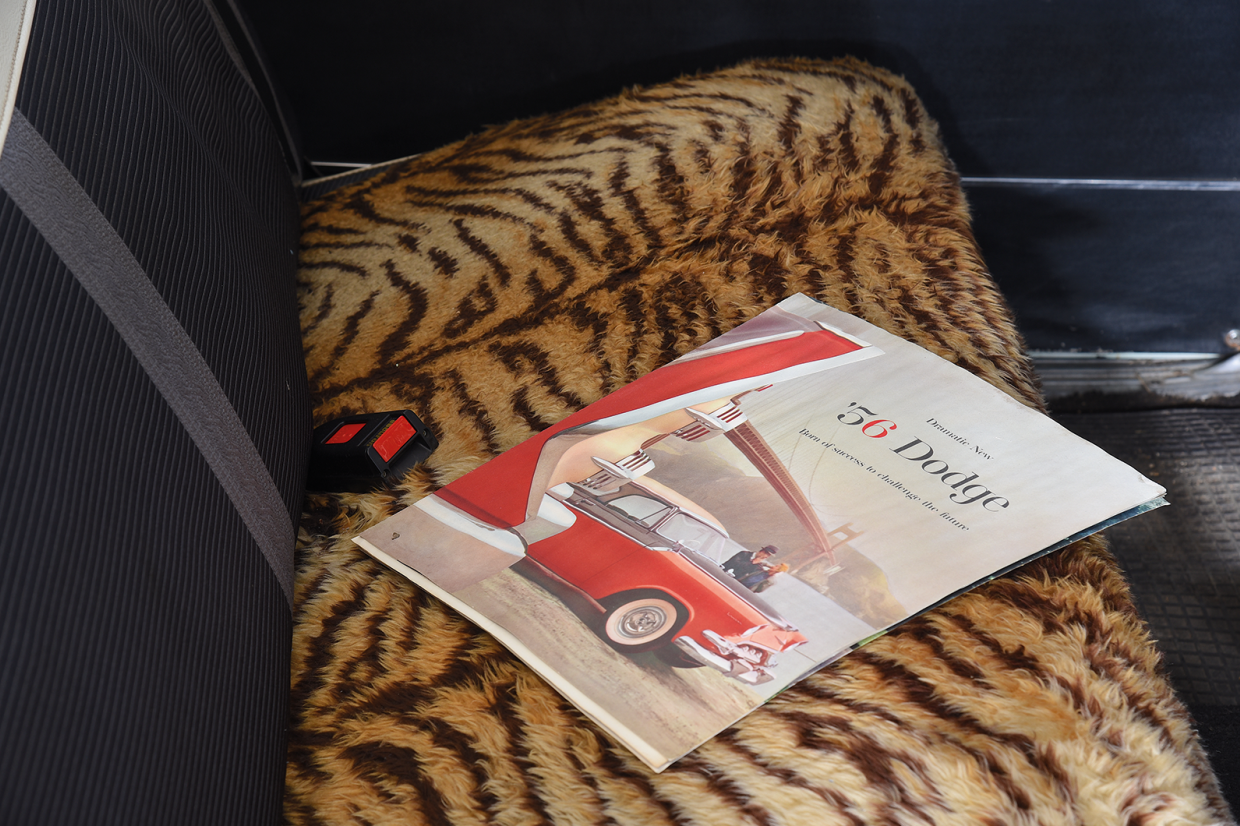 Being mechanically sound, it was immediately pressed into everyday service, but the first real lengthy test of faith was to Harrogate, Yorkshire, for his brother’s wedding: “After I offered to provide the wedding car, he secretly went and booked another car, thinking we wouldn’t make it. The Dodge didn’t miss a beat the whole trip.”

Within a year, Linda had landed a job at the University of Southampton and the decision was made to leave London and set up home in the New Forest.

The Dodge not being the most subtle of cars, Kermode soon attracted attention from the locals, who all wanted to know whether he’d heard of a character called Dave Dunford.

For the rest of the decade, Dunford would service the car: “I’m no mechanic, but Dave taught me not to be afraid of getting my hands dirty. He explained how relatively simple these cars are, and not to be intimidated by them.

“Back then, before the internet, getting parts was a bit of a challenge. We replaced the steering column because it had snapped in half under extreme lock. It was welded but broke again, so we phoned this guy in the States who had a hoard of old Mopars.

“I always remember him saying, ‘Yup, I’ve got one of those cars in the south field, but I won’t be going there again until February.’ It’s much easier these days.” 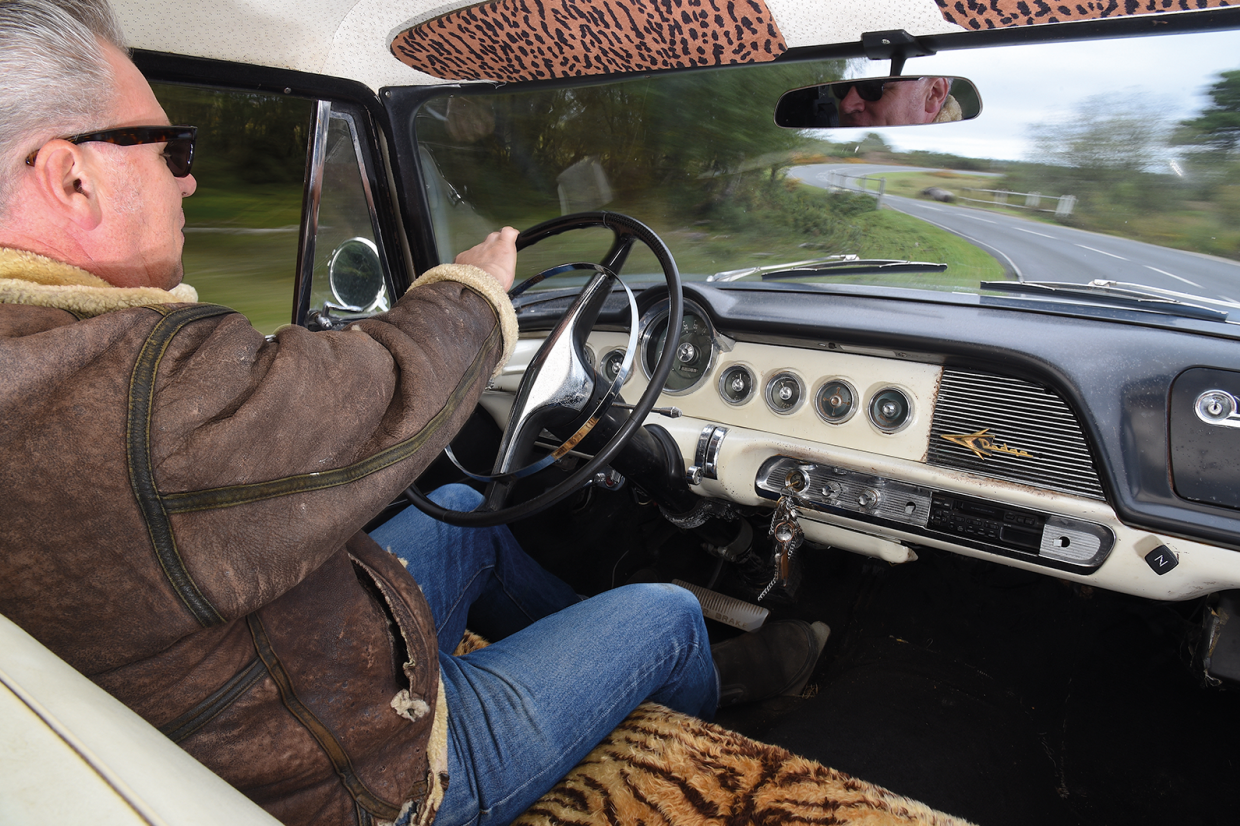 The much-loved Coronet inspired the name of Kermode’s band

It was Kermode’s neighbour (and garage owner) Derek Smith who convinced him to store the car rather than sell it when his daughter and son, Georgia and Gabriel, arrived.

But before it was laid up and alternative, family-oriented transport was acquired, the Coronet was rear-ended. The offside rear wing, although since repaired, still bears a small scar of the accident, the line of the fin curving slightly.

It was nothing compared to the modern, which was immediately condemned for scrap at the scene. No-one was seriously hurt, but as a result the Coronet was fitted with seatbelts.

The ‘Green Goddess’, as it had been christened, would remain in dry storage for more than 10 years. 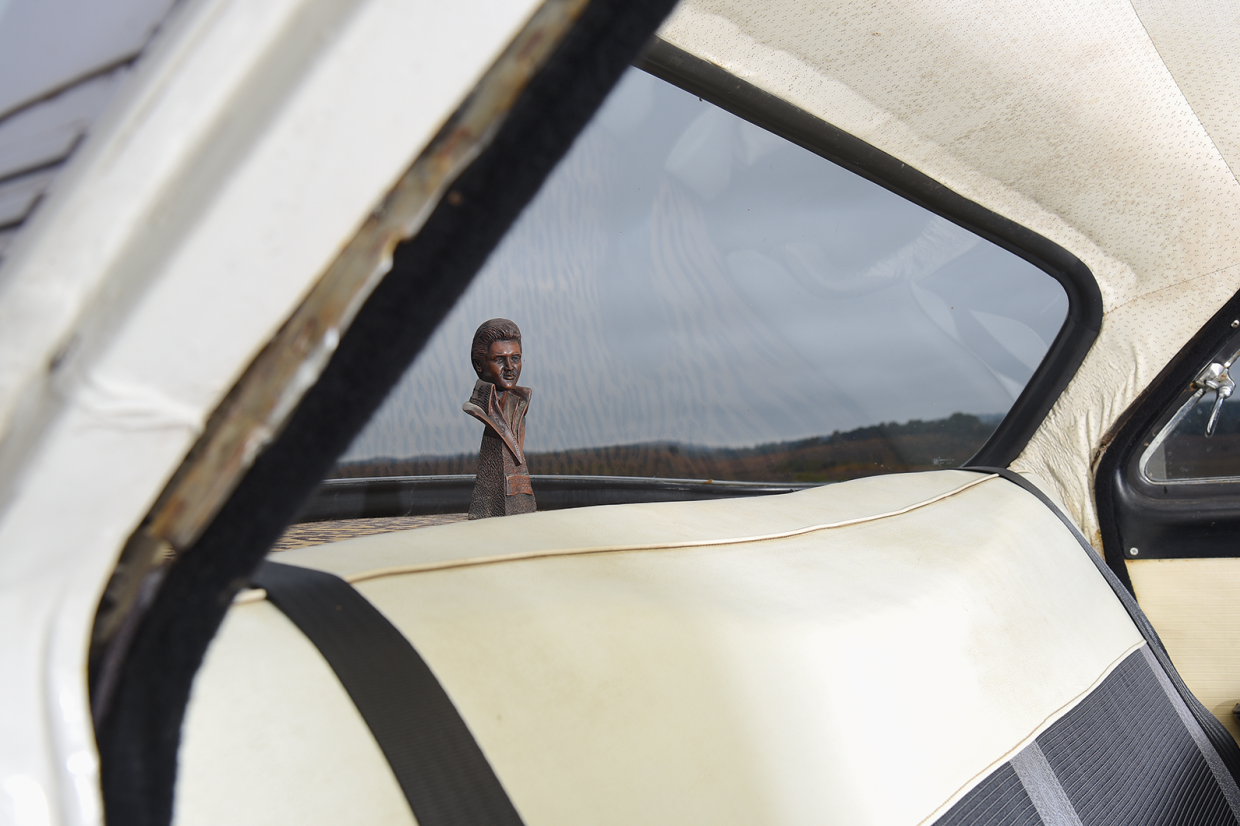 Despite being laid up for such a lengthy period, the car still managed to inspire its owner.

“Mike Hammond, who lectured in film with Linda at Southampton, and I had been playing music together – lots of traditional American songs from the ’30s. We were searching for a band name. I think we both liked The Louvin Brothers’ music, so I said why not The Dodge Brothers? I had no idea that’s what the company was called when it first started up.”

The band has gone on to record three albums. One particular track, Step Away From the Car, not only has lyrics about the Coronet, but also its engine noise.

Given the number of times Kermode has to sit in cinemas, I was intrigued to know if he looks out for ’56 Dodges in period films: “I do, in fact. What’s worse is I that know which films are made in the UK and have worked out there’s another ’56 like mine doing film work here.” 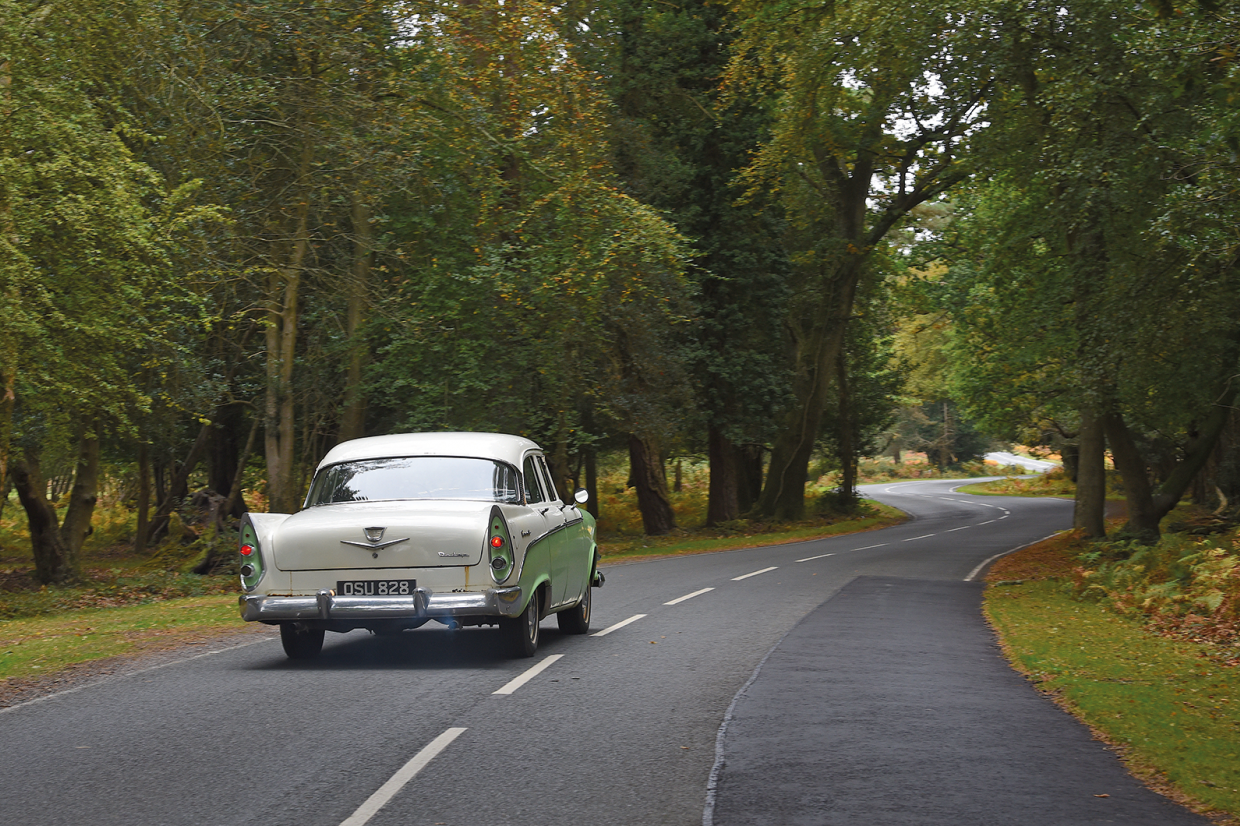 The Dodge Coronet is now back in regular use

During the Coronet’s hibernation, a 1959 Mini was acquired from a local garage for Linda’s commute and Kermode ended up buying his father’s ’79 Capri to take the kids to school.

Both cars are still with the family, but they are now waiting their turn to be returned to the road.

Sadly, Dunford died unexpectedly before the Dodge was disinterred, so the task of getting the car roadworthy again was given to New Forest Classic American in Lymington. Smith then became a more than willing accomplice once the Coronet was back home.

Since it hit the road once again, both Georgia – who, as the oldest of the siblings, has staked her claim on the Green Goddess – and Gabriel have been driven in it to their respective proms.

It has served once again as a wedding car for a close friend but, more importantly, the Coronet has continued to entertain its owner nearly 30 years. So what would Kermode do if he had enough money to buy any classic he wanted? “I’d get the Dodge restored.”

20 American classics for less than £20k 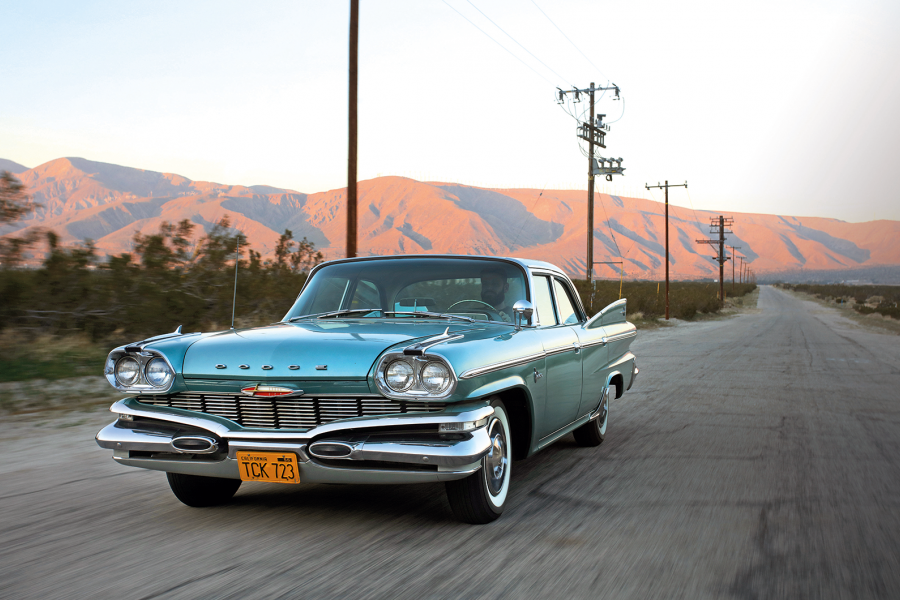 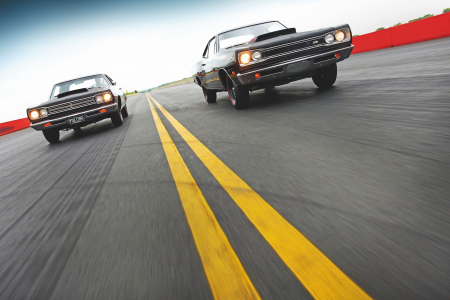 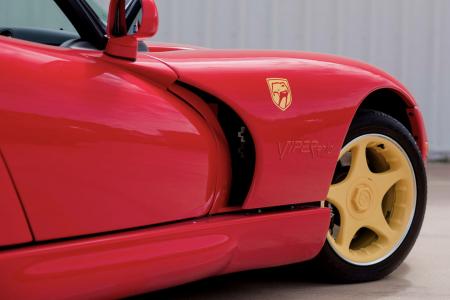