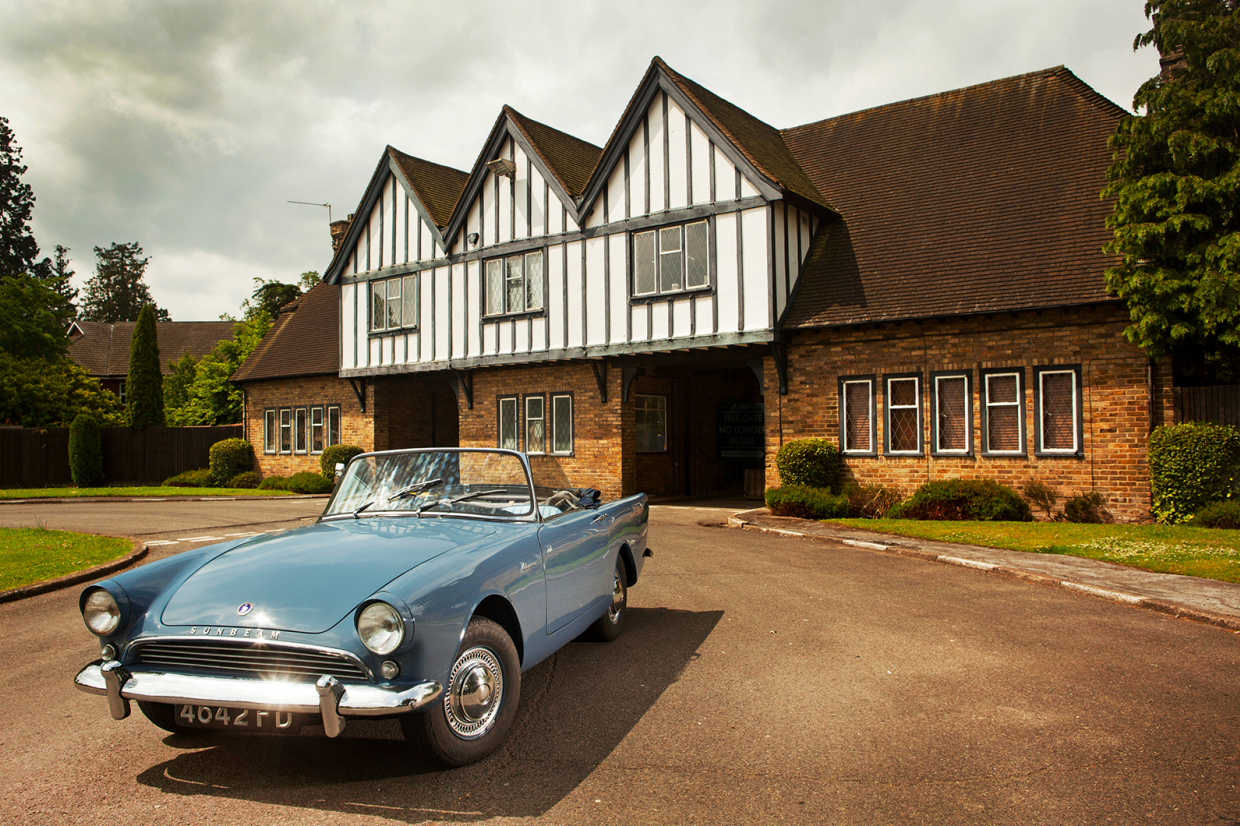 If you entered the famous Pinewood Studios in the first half of 1962, you would have witnessed a number of films in production that stood an excellent chance of commercial success.

On one stage, Billy Fury, ‘The British Elvis’, was being directed by Michael Winner in Play It Cool, while the familiar Pinewood ship set was in use for Carry On Cruising, the first of the series in colour.

Most industry watchers would have predicted that Pinewood’s main box-office hit of the year would star a figure of international renown – Norman Wisdom in On The Beat.

Also being shot at Pinewood between 26 February and 30 March was the first cinematic adaptation of the Ian Fleming novel Dr. No, due for release on 5 October.

The star was up-and-coming leading man Sean Connery, who had recently portrayed an Irish heavy with a very odd accent in black-and-white crime drama The Frightened City. His boss was played by Bernard Lee, better known as Supt Meredith from the Edgar Wallace mysteries, and the director was the respected Terence Young.

Among the scheduled scenes were the close-ups for a car chase shot on location in Jamaica earlier that year. 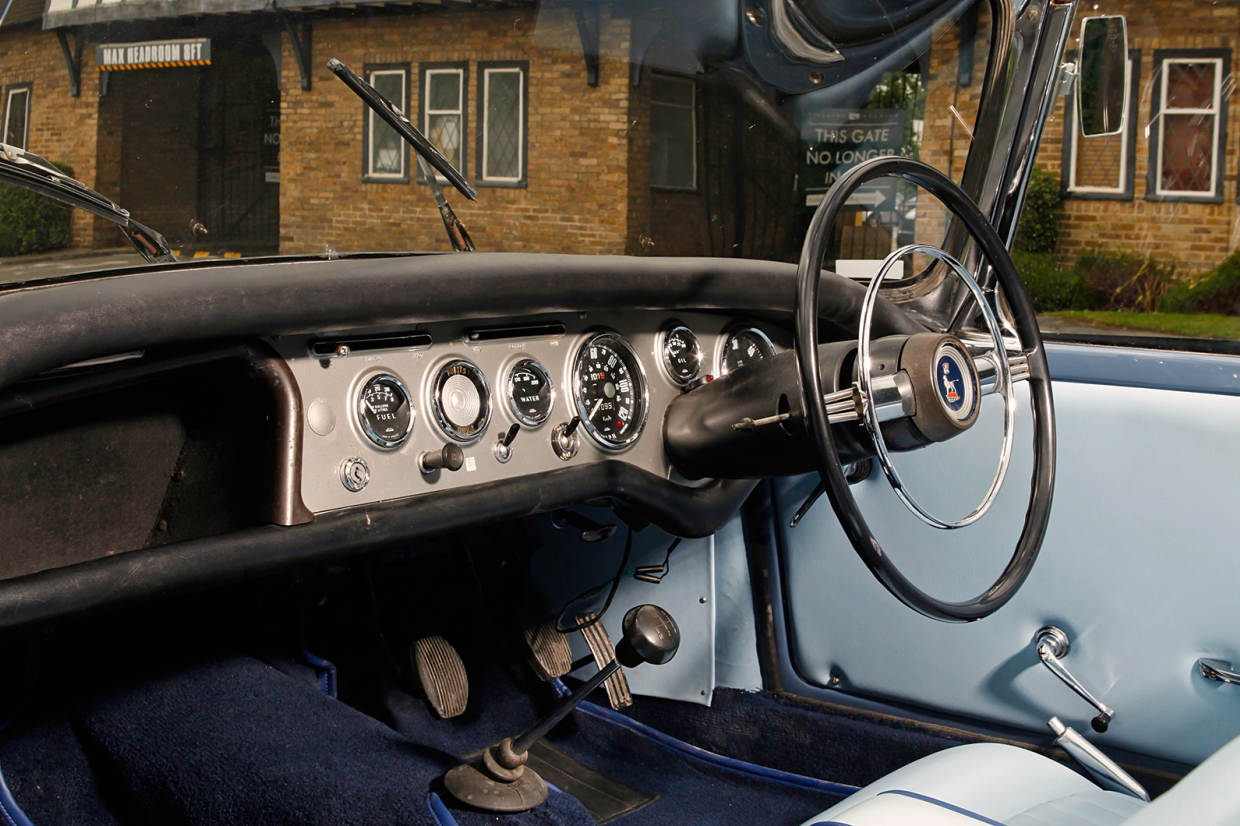 The view that greeted James Bond

Today, Dr. No needs to be seen and appreciated for its truly 1962 values – the chain-smoking and ultra-Brylcreemed extras on the Les Ambassadeurs set, the earnest-looking cypher clerks in their Hank Marvin glasses and local intelligence officers driving Ford Anglias.

Plus a Commander RN and international man of mystery behind the wheel of a Series II Sunbeam Alpine, evading the evils of back-projection.

The first James Bond book, Casino Royale, was published in ’52 and turned into a TV play two years later.

The rights to the rest of the books were acquired by Canadian producer Harry Saltzman, who formed Eon Productions with Albert ‘Cubby’ Broccoli, a UK-based American film-maker who specialised in ’50s comedies starring Anthony Newley and Bernie Winters, or African epics in which Victor Mature’s stunt-double boldly wrestled with stuffed lions.

United Artists provided Eon with a budget of $1.1m – c£350,000 – which, although not the parsimonious sum all too familiar to the makers of the Hammer Horrors and the Carry On series, was not especially lavish, even by the standards of 1962.

If Dr. No does manage to achieve a look of opulence, this is almost entirely due to the genius of designer Ken Adam – the man who invented the concept of the Nehru-suited supervillain’s underground lair, with guest rooms for any kidnapped VIP and air vents large enough to accommodate a tall Scottish actor. 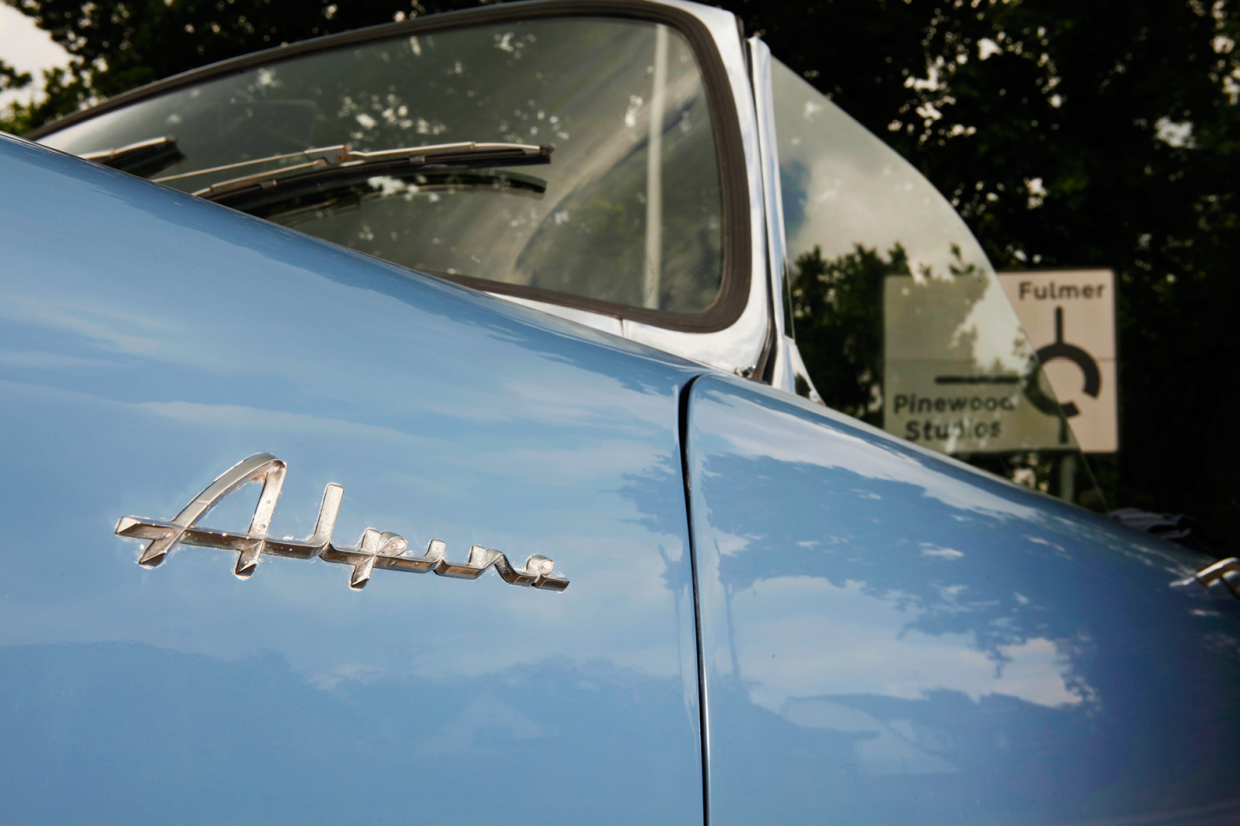 The budget did, however, allow for five weeks of filming in Jamaica. In doing so, Young’s camera captured a world that is possibly the nearest to the original novels.

Dr. No used several amateur and semi-professional actors, such as Jamaican solicitor William Foster Davis, who played Supt Duff with such an authentic air, sweeping up in his black Ford Consul Mk2 staff car to arrest duplicitous ‘Eurasian’ Jezebels.

The original Bond film is set in a Jamaica of ceiling fans lazily turning above gin-sling-quaffing remittance men, and of Austin A55 ‘Farina’ and Standard Ensign taxis. Sadly, little of the limited budget was spent on the car-chase sequence...

The first car driven by Bond on-screen was a 1957 Chevrolet Bel Air Convertible, 007 taking the wheel after defending himself against the evil Jones the Chauffeur, a swarthy employee of the eponymous villain (rugged bit-part actors in 1962 British cinema who scowled a good deal were almost invariably bad lots).

In the book, Bond drives a variety of cars, from Hillman Minx to Austin A30 hire car, but for the screen version he takes the wheel of a Lakewood Blue Sunbeam Alpine Series II, one of the few sports cars available in Jamaica that was deemed suitable for 007.

The Bond Alpine was provided by Syd Hirst, Lord Rootes’ representative in the then-British West Indies and Central America, via Kingston motor dealer HE Robinson & Co. 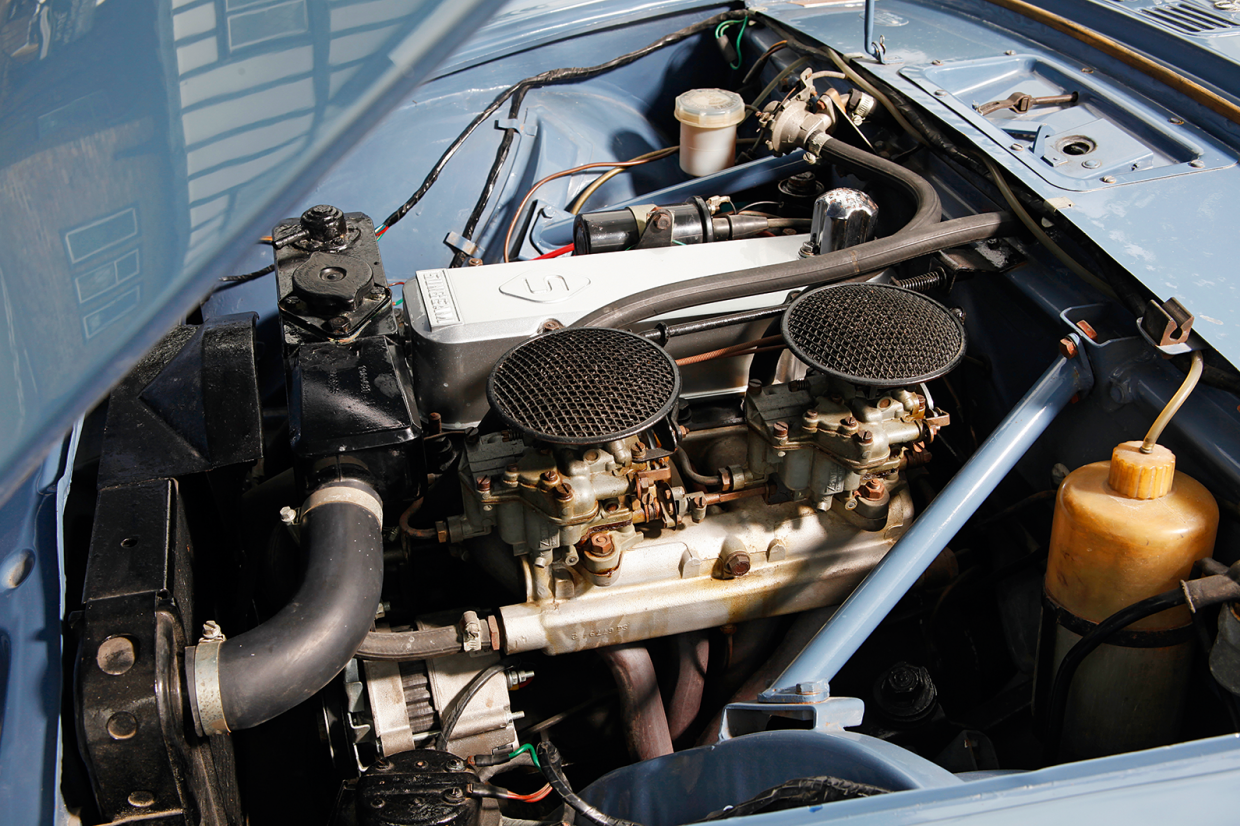 Hirst’s son Michael remembers the Alpine as being “absolutely standard”, but the Sunbeam’s 100mph top speed was more than enough to deal with 1962-vintage cinematic villainy.

Dr. No is a rare example of a Bond film in which 007 has to rely on his driving skills rather than gadgets – he doesn’t actually drive the Bentley in From Russia With Love or the Toyota 2000GT in You Only Live Twice, while the toy-packed DB5 stars in Goldfinger and Thunderball. In the first Bond film, all 007 has to rely on are his wits.

Post-war British cinema is fertile ground for aficionados of dire automotive pursuits and, although Dr. No is not quite on a par with the Austin A35 van chase in The Deadly Bees, it is not so far above this masterpiece either.

The sequence of Bond driving along the A3 coastal road near Ochos Rios to the Kaiser Terminal bauxite mine, only to meet a trio of Dr. No’s assistants in their 1939 LaSalle Funeral Coach, had to be doubled in Pinewood.

It proves beyond all reasonable doubt that it was Connery rather than Roger Moore who introduced the concept of ‘eyebrow acting’ to the 007 franchise.

As the back-projection of the hearse on the gravel roads of the Caribbean Cement Company grows ever closer, Bond is forced to take action, spinning the prop steering wheel of the Sunbeam studio mock-up.

These skills are sufficient to, a) prompt the Alpine’s tyres to make Tarmac-squealing noises on a dirt road and, b) cause the LaSalle to transform into a Humber, just prior to cannoning off a convenient cliff. 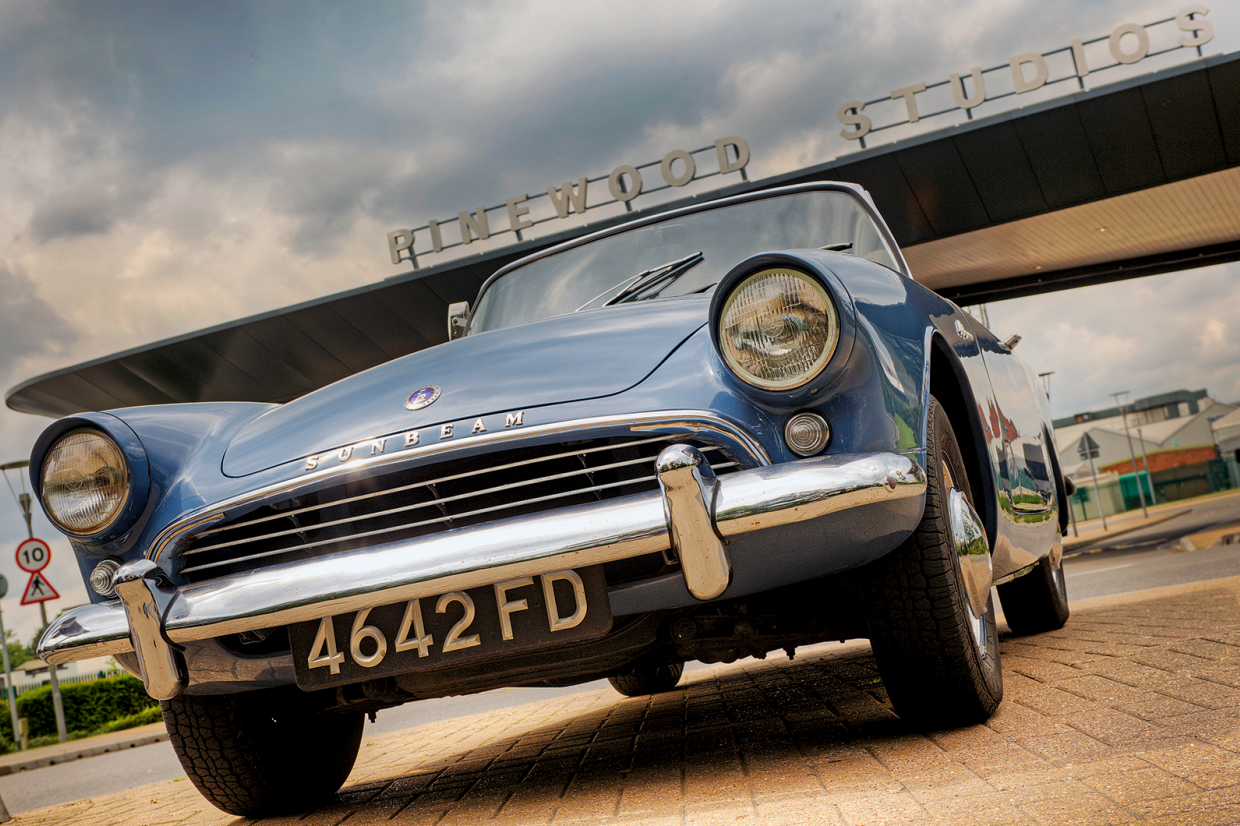 The face that launched a thousand wannabe Bonds

Fortunately, not even this delightfully inept sequence can detract from the inherent charm of an Alpine.

According to Nigel McFarlane, president of the Jamaica Classic Car Club, the ‘Bond’ Sunbeam is believed to have survived, and still lives on the island in a less-than-immaculate state.

Looking at Tony Whiteside’s Lakewood Blue Series II, which is in rather finer fettle, it is hard to believe that beneath those sleek lines sits the floorpan of the unglamorous Hillman Husky.

This was the car breathlessly described by The Daily Telegraph as being able to: ‘Climb with the agility of a young goat, sit all square through bends and corners, and descend passes in safety at speeds which would be impossible in the average car.’ An ideal Bond car, then.

But when the Alpine was launched in 1959, many blazered enthusiasts needed a therapeutic cold shower.

No British sports car should have aspirations of comfort and civility, yet the Alpine featured wide-opening doors; a sensible hood mechanism with a permanently attached, three-piece, body-coloured metal cover; and, worst of all, winding windows.

For a car with sporting pretensions, the brochure’s claims that the interior was ‘superbly designed’ and that the ‘driver and passenger are surrounded by generous comfort’ was just not on, old boy. 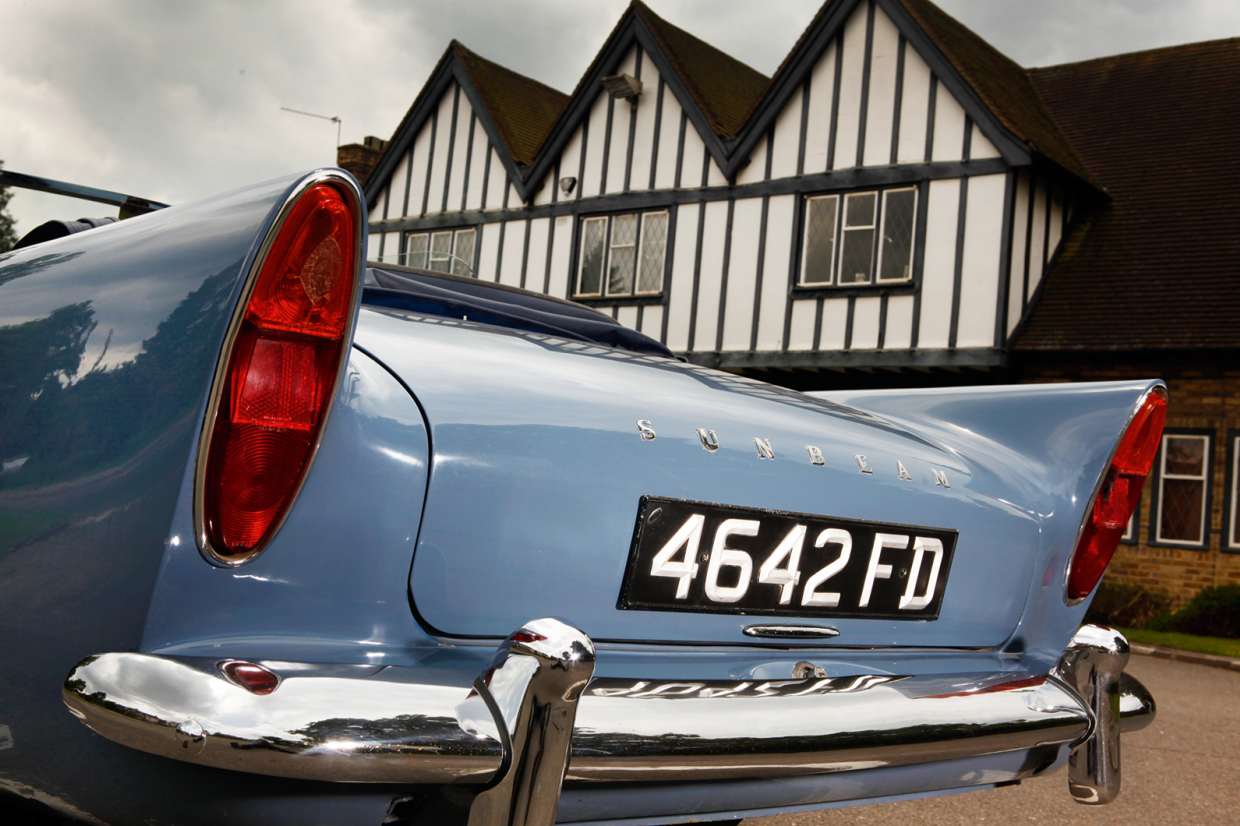 The American-inspired fins were clipped for later series of Alpines

The first Alpines were powered by a 1494cc ‘four’ and built by Armstrong, but when the Series II was introduced at the 1960 Motor Show, the engine was bored out to 1592cc and production shifted to Rootes’ Ryton plant.

The interior was even more accommodating, with such thoughtful touches as adjustable pedals, and Rootes publicity did its utmost to combat the Alpine’s somewhat unfair reputation as a ‘ladies’ car’.

Indeed, a contemporary advertisement in Jamaica’s The Gleaner claimed that the Sunbeam was ‘very popular with unattached males’ – possibly due to the fact that: ‘The girls just love the Alpine... the thrill of driving along the highway with the wind through their hair.’

Elsewhere in the narrative, a standard Bond automotive trope had also been established. If Dr. No was the picture that set the template for Bond girls speaking with the dulcet and overdubbed tones of Nikki Van der Zyl, it also set forth another central Bond rule: subsidiary villains who drive mundane cars will not live beyond the sixth reel.

The character of Professor Dent was played by Anthony Dawson and few – with the possible exception of Denholm Elliott – could utter the words “old boy” with such honeyed menace.

Yet the fiendish doctor’s sidekick drives a mere Vauxhall PA Velox and, with such a choice of car, is as doomed as the polo-necked thug driving a Triumph Herald in Thunderball, the over-acting extras aboard a Toyota Crown for You Only Live Twice and the fist-waving, Peugeot 504-driving assassins of For Your Eyes Only

Perhaps if the Professor had invested some of his illicit earnings in a Cresta he might have survived until the credits. 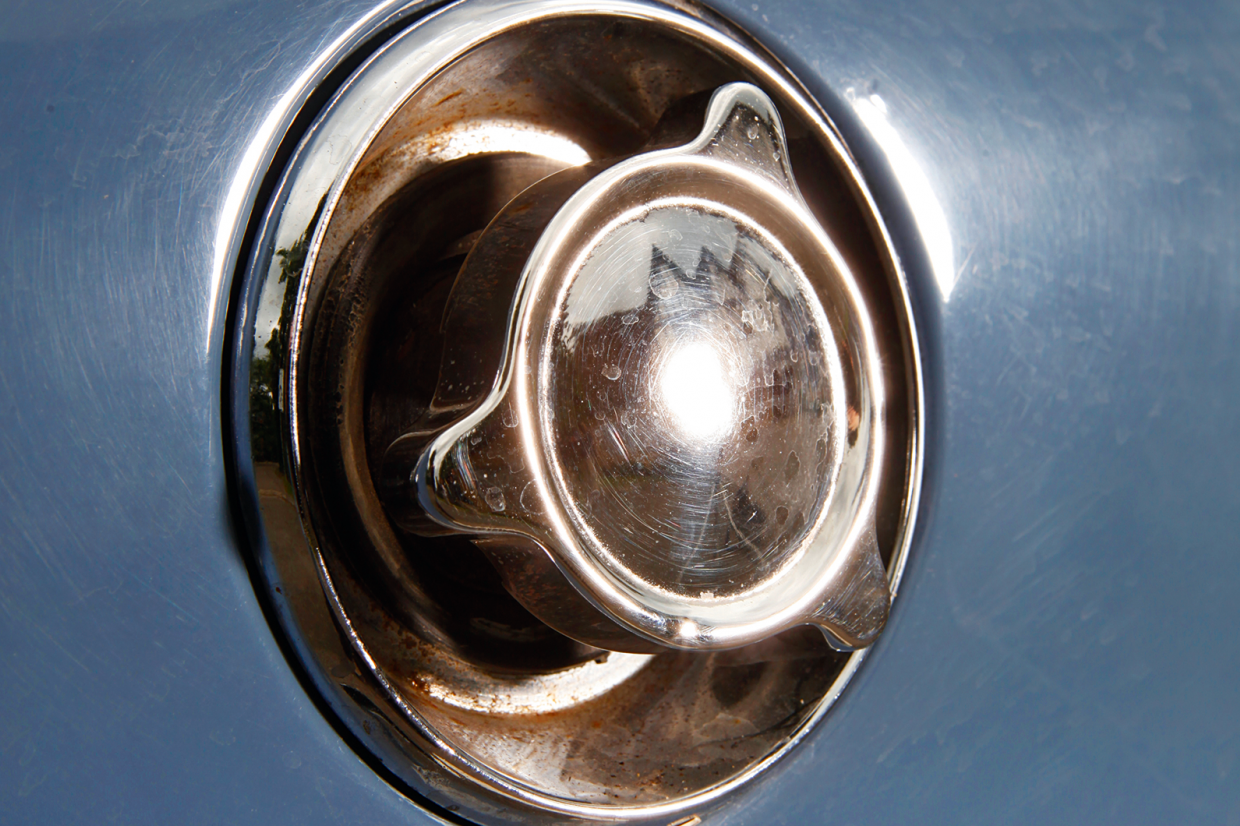 Another Dr. No feature that would become familiar in the 007 movies was the uselessness of Bond’s US counterpart Felix Leiter, played by Jack Lord.

Apart from cruising around in a 1961 Chevrolet Impala Sport Sedan with an overdubbed V8 engine note, his sole duty is to be ordered about by 007.

But when Dr. No entered production, Britain’s programme of decolonialisation was in full spate – Jamaica would gain independence before the end of the year – so Bond’s superiority over a CIA man was welcome to occupants of the 1s 9d seats at the Odeon.

Dr. No grossed nearly $60m worldwide, due to chaps of all ages – lost in the thrills of Ursula Andress emerging from the sea, the music of Byron Lee and The Dragonaires, and Connery’s immaculate taste in hats – envisaging themselves as the 007s of suburbia.

With such dreams of international intrigue, they could overlook the entertaining continuity errors of a Bel Air with a Ford Fairlane’s dashboard or the Impala changing model from shot to shot, and ignore the appalling dialogue given to Bond’s Jamaican sidekick Quarrel (John Kitzmiller).

And the film’s mass appeal is precisely why the Alpine – a glamorous yet accessible sports car – was ideal for Dr. No. 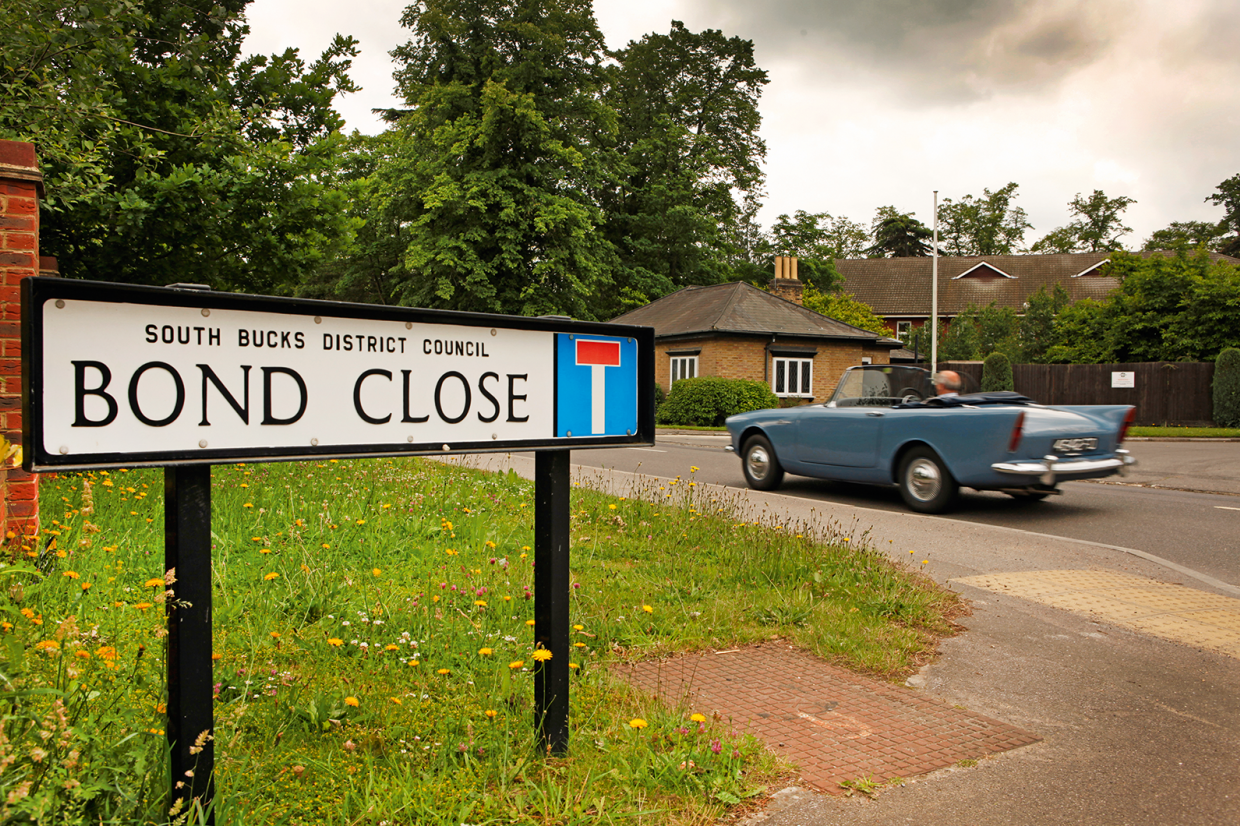 Passing by an aptly named cul-de-sac near Pinewood

A vehicle that cost £1100 was still a fairly expensive proposition for the average British cinemagoer in 1962 but, unlike the Bentley Continental of the Fleming novels, it was not entirely unattainable.

Just as the Alpine transcended its mundane Hillman origins to become one of the most elegant sports cars of its generation, Dr. No disguised its budgetary limitations to become a worldwide smash.

All that was needed on leaving the picture house was an HP dinner jacket from Montague Burton, friends who were prepared to don white labcoats and shout “countdown in 5 seconds” at regular intervals, and a new Alpine.

In terms of 1962 cinema, Dr. No is not the greatest spy film – try The Manchurian Candidate – or the best car-chase picture (The Fast Lady), but for £50 down and £10 per month, an Alpine was within reach of those transfixed from the moment they saw Maurice Binder’s ‘gunshot’ opening.

With a new Sunbeam the dream was complete, and a bikini-clad maiden singing in the voice of Diana Coupland could be yours.

This was originally in our September 2012 magazine; all information was correct at the date of original publication

A touch of class: Sunbeam MkIII vs Singer Hunter

Greatest Bond cars: inside the October 2021 issue of C&SC 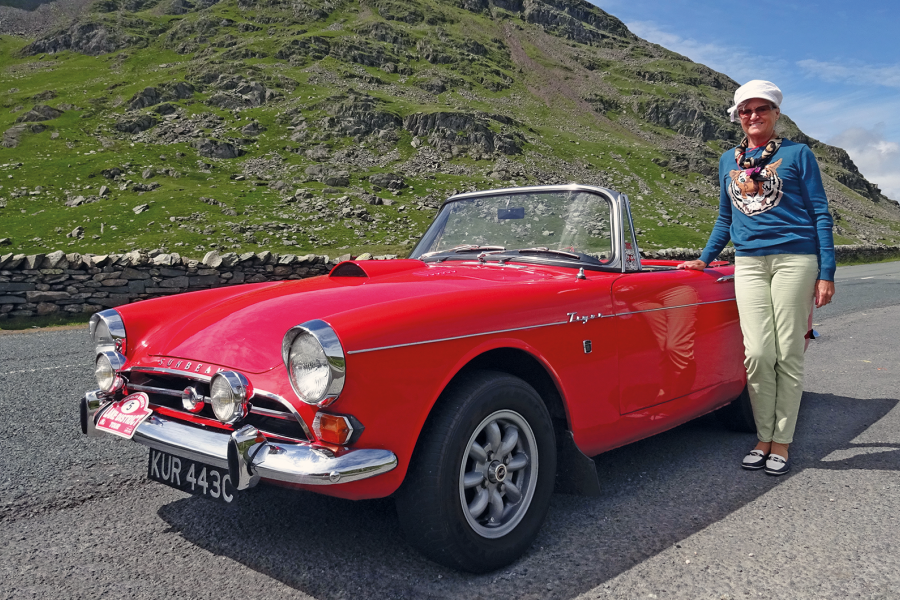 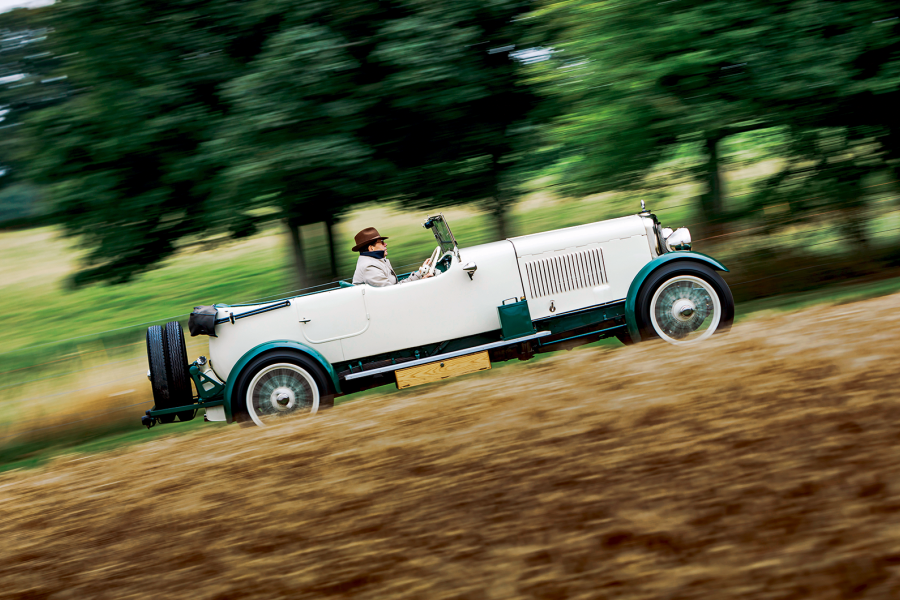