The generation game: racing with the VSCC 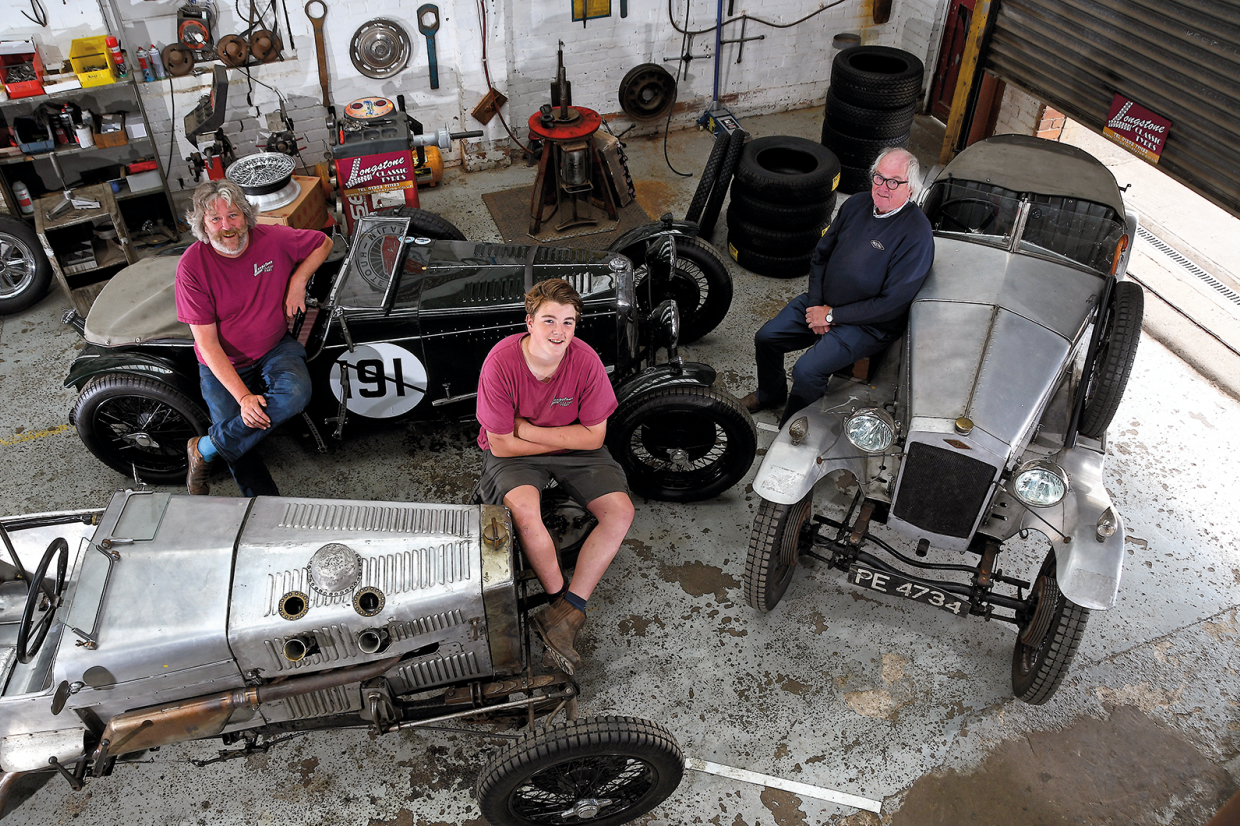 The fact that competition-starved vintageants could return to the track at all during the COIVD-19 pandemic, with even a few spectators permitted, made the Vintage Sports-Car Club’s visit to Mallory Park on Sunday 23 August 2020 exciting enough for most.

But for one family the event at the Leicestershire venue provided an extra frisson, as grandfather, father and son took to the circuit for the Frazer Nash Challenge Race in the ultimate battle for breakfast-table bragging rights.

Up towards the sharp end of the grid for Race Seven, exclusively for GN and Frazer Nash machines, was a familiar sight, as Longstone Tyres supremo Dougal Cawley (51) lined up in his (in)famous 1929 GN/Frazer Nash/Ford hybrid, ‘Piglet’. 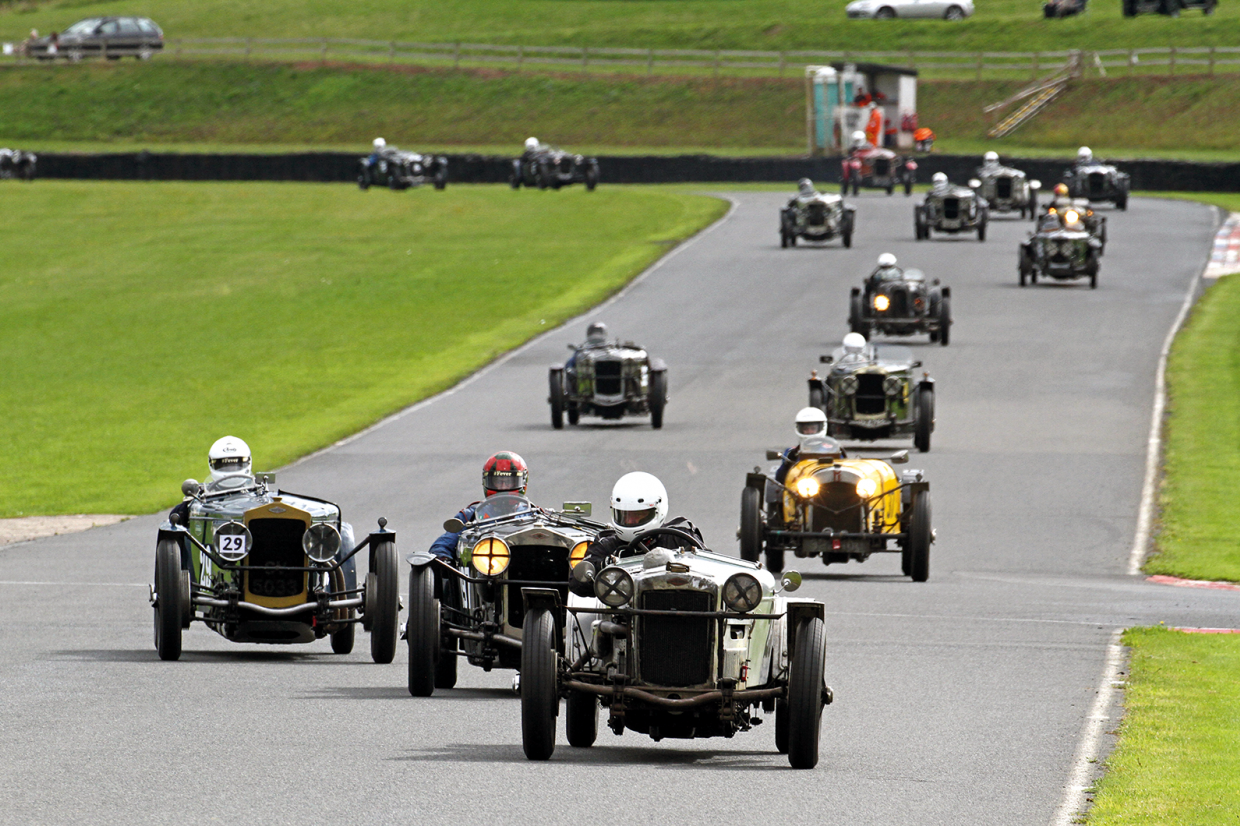 Dougal raced into the lead on the opening lap in the powerful ‘Piglet’, but Patrick Blakeney-Edwards fought from last on the grid to win © Pete Austin

“It’s as old as the newest bit, which is the 1929 Frazer Nash radiator,” says Cawley with pride at his highly competitive ‘bitsa’.

It features a GN chassis and bevel ’box, Nash radiator and axles, plus a 3.3-litre Ford Model A engine with Miller-Cragar overhead-valve conversion, mustering around 120bhp and a thumping 150lb ft of torque.

Sitting in the midfield on the fifth row was his 17-year-old son Wilf, aboard family friend Jonno Fenning’s 1936 Frazer Nash Emeryson Special, originally put together by future F1 team boss Paul Emery and based on a shortened Frazer Nash TT Replica chassis with a Meadows engine.

“Jonno lives in our village and when he was 14 he had a Saturday job at Longstone,” says Dougal. “We were all titting around with old cars and I guess he just caught the virus.”

Finally, propping up the grid in one of the oldest and most original cars in the race, was 77-year-old grandfather Andy Cawley aboard the 1500cc Anzani-engined 1925 Frazer Nash Super Sports that he has owned for a quarter of a century. 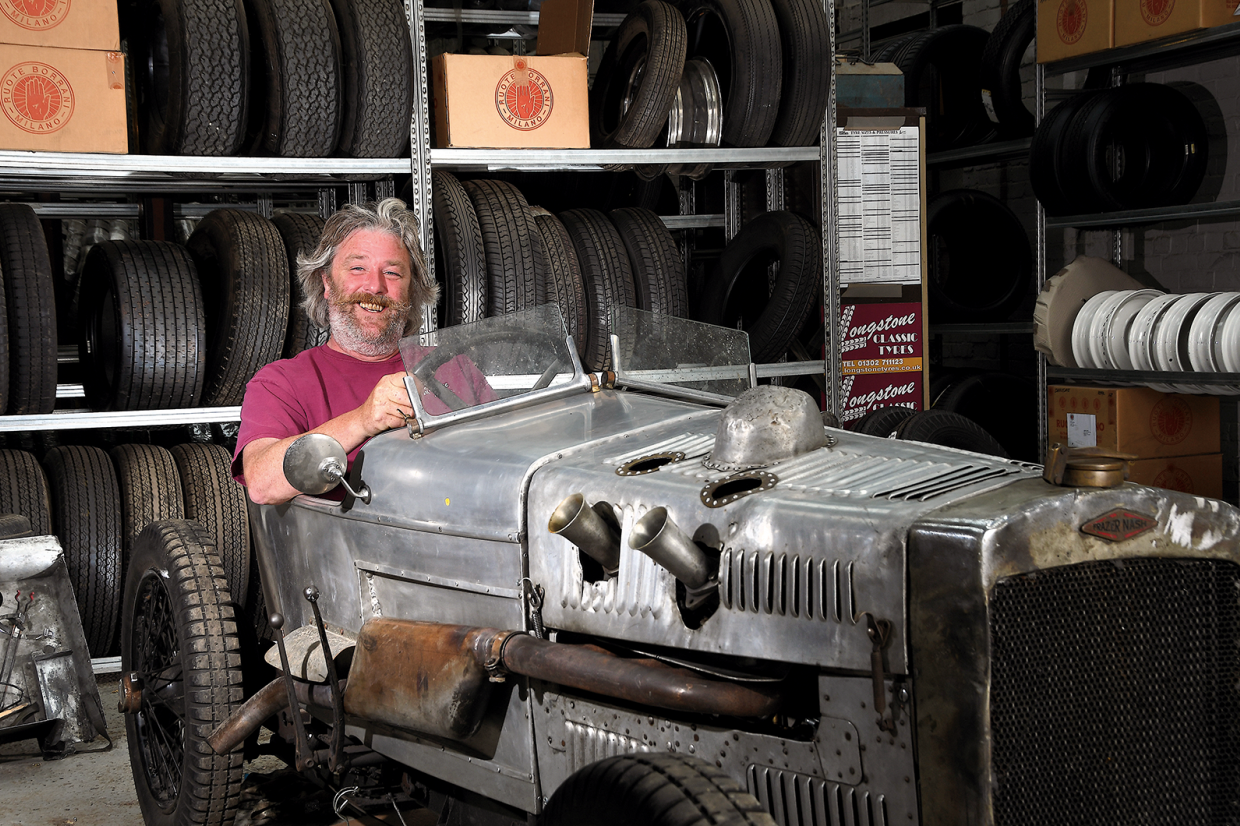 “The idea of the three generations competing together came up when Wilf first got his race licence,” says Andy.

“I had always fancied racing a quick car and Jonno said,‘ You can race mine and Wilf can use yours.’ Then somehow Wilf ended up in the Emeryson – I’ll never forgive him for that!”

“Wilf was old enough to race, Dad was still driving, the Nash race is the highlight of the vintage calendar and the whole year was falling apart, so it seemed like a good time to do it,” notes Dougal.

“Remarkably, Dad and I had both of our cars working at the same time, and then we got Jonno’s kind offer so we were away.”

As you might expect, the passion for early machinery began with the family’s elder statesman, and it was clearly in the blood. 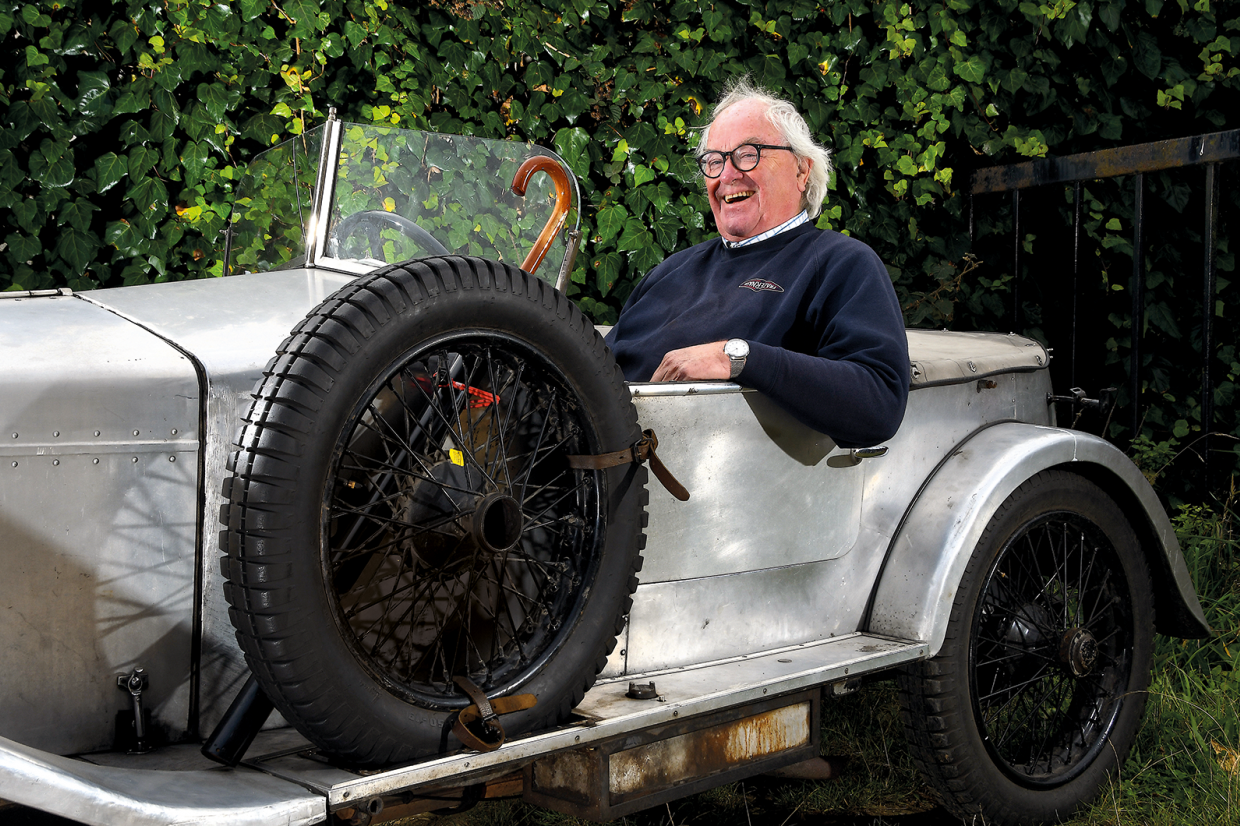 Andy Cawley: “I started racing at 65 and was always last – it must be the slowest car out there – but I’ve had a lot of fun along the way”

“I’ve been in the VSCC for 55 years now,” explains Andy. “The club was formed in 1954 and before that the term ‘Vintage’ had only really been used to describe port.

“I had always been interested in vintage vehicles, and my first car was an Austin Seven Ruby. I was desperate to buy a VSCC-eligible car so I picked up an MG with a Ford engine… then promptly crashed it.

“When I lost the end of my finger in an industrial accident I got a £126 payout and immediately bought a Riley Kestrel for £80, before moving on to a Lagonda 2-litre.

“After marriage then children and later taking up yacht racing I had no spare cash left for cars, but I came back to the VSCC when I was in my 40s.

“My wife and I were at Drumhouse watching the Lakeland Trial and she turned to me and said, ‘We could do this. We could have a Frazer Nash.’ That started a two-year hunt for a car and we bought this, our first, 25 years ago and still own it today.” 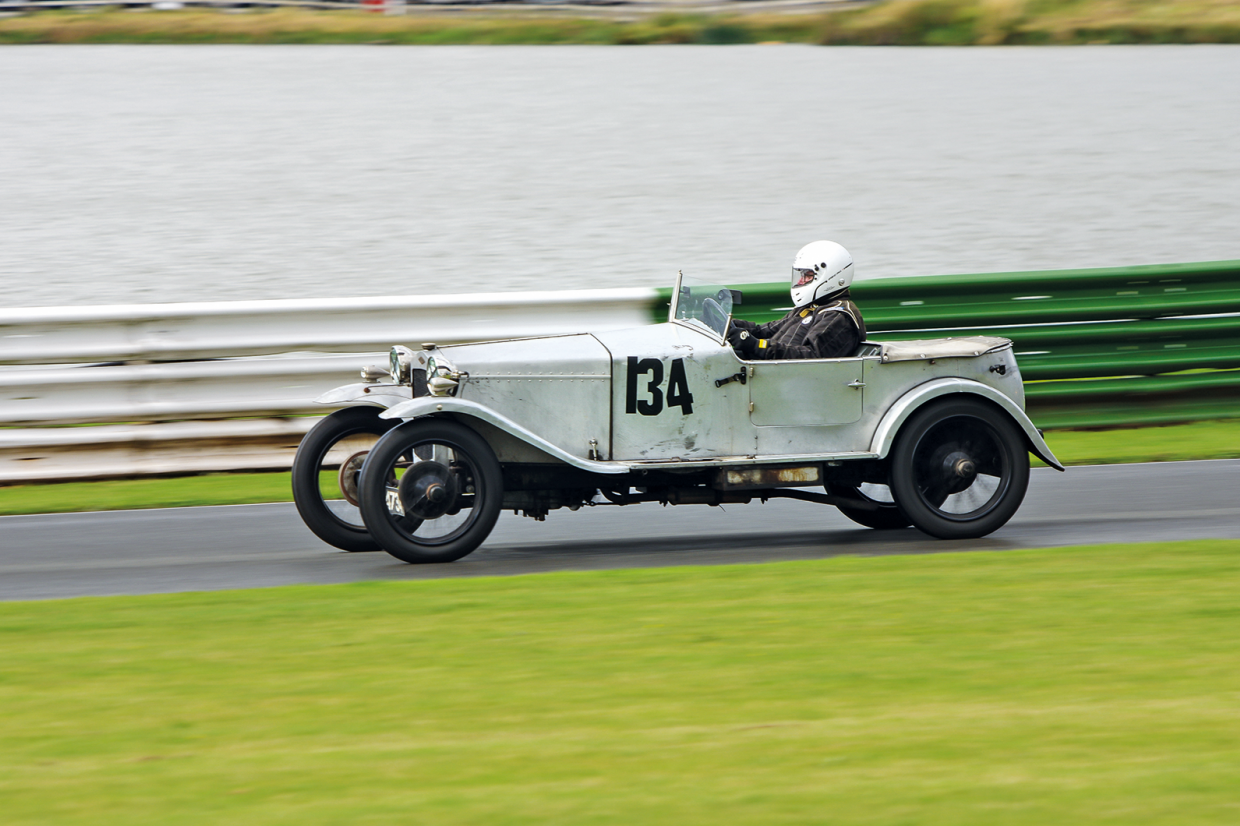 Twice rebuilt since, the Super Sports remains true to the specification with which it left the factory, despite a muddy 15-year trials career before Andy first took to competition on hard surfaces, starting out with sprints and hillclimbs.

“As soon as I got the Super Sports I joined the Frazer Nash Car Club, but when I became Club Captain I thought I had better get a race licence,” he recalls. “I started racing at 65 and was always last – it must be the slowest car out there – but I’ve had a great deal of fun along the way.

“When I first got my driving licence, a vintage sports car was a better car than the stuff being sold new at the time – MGAs, TR2s and the like. And it was an inexpensive way of going racing.”

“It still is,” interrupts Dougal.“Probably the cheapest way into motorsport. Wilf’s Austin Seven cost less than £6000 and it’s been down to him to make it competitive. You don’t even have to be a great mechanic.”

In many ways, Wilf’s debut in the Emeryson Special was an extension of the Cawley family philosophy, with dad Dougal putting his money where his mouth is by pioneering an initiative to help the club bolster thinning grids by encouraging the young enthusiasts it needs for the movement to survive into the future. 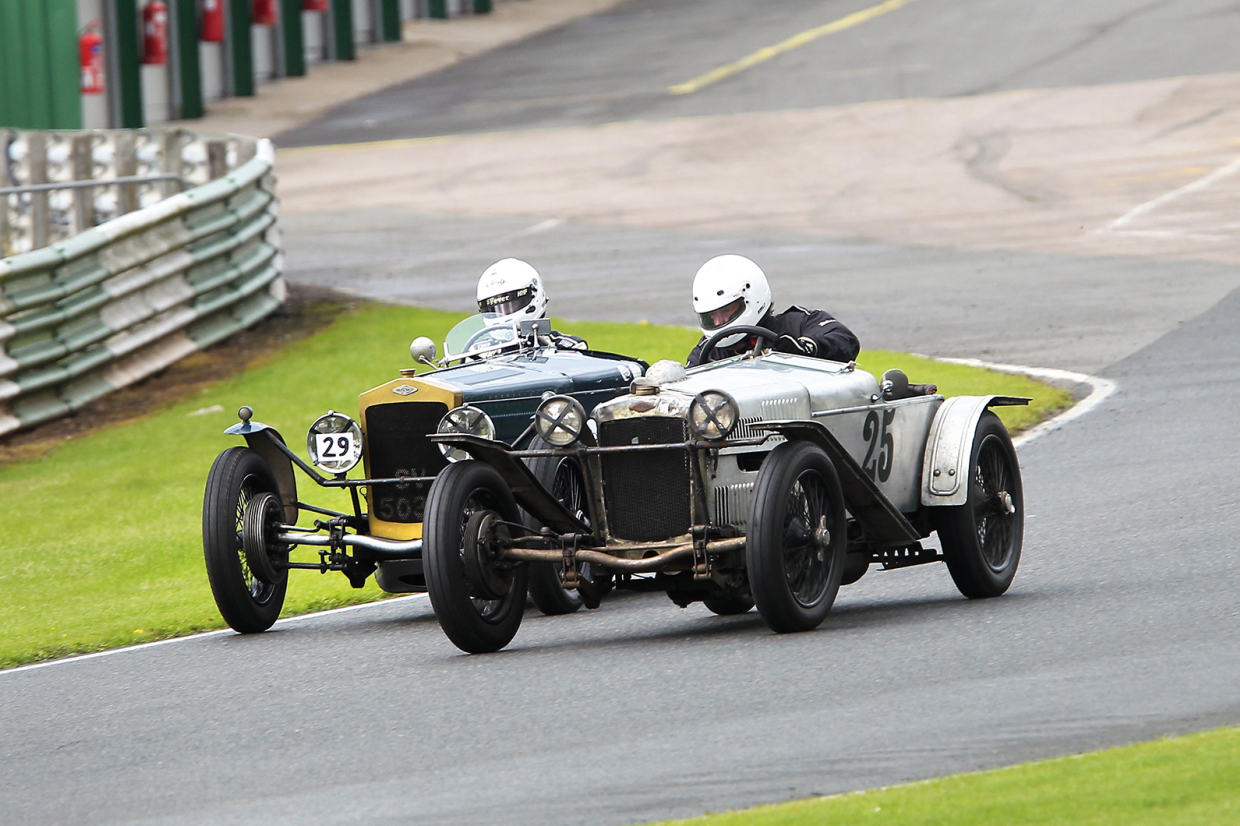 “We’ve been struggling to get full grids, so the club has started a brilliant scheme whereby under 30s – what we call the youth in the VSCC – get their racing for half price,” he explains.

“At Mallory, Longstone Tyres sponsored an extra race for under 30s so they got to race for free. The VSCC is full of old buffers with these treasures and they are now letting their grandkids get out and drive them – it’s epic stuff because otherwise they would just end up as dusty old relics. Manky old specials such as Piglet need to be raced to be alive.”

Just like his father and his son, the former tree surgeon’s first forays in vintage vehicles were aboard the venerable Seven – and all three Cawleys still own an Austin today.

“I went to VSCC meets when I was a child and grew up with a Lagonda in bits in the garage,” says Dougal.

“My first car was a VW Beetle and everything I drove, I drove recklessly, so I started doing some trials in a Seven in 1997-’98.

“I began going to proper race meetings as a spectator, then we were in the VSCC paddock in 2002 when I saw a sheet of A4 paper hanging up on the tyre tent saying ‘Business For Sale’. I spent that summer working at Longstone to learn the ropes, then bought it.”

Having to work at vintage and historic race meetings most weekends, Dougal was soon itching to give it a go. 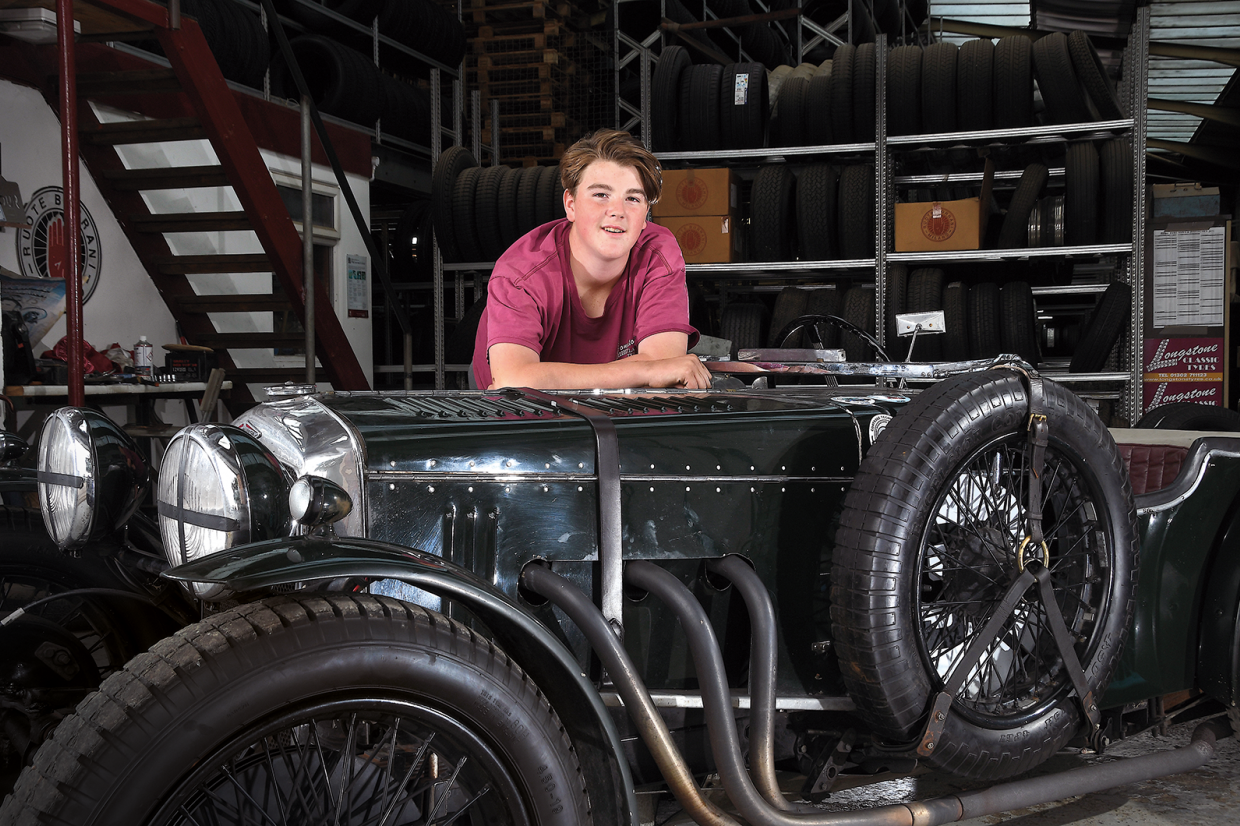 “I first did the ‘Pom’ [the Pomeroy Trophy at Silverstone] in my Ford Cortina 2-litre and the rot set in. Then in 2004 I sold a house in Doncaster, made some money and bought Piglet from the late James Diffey.

“I just drove it round the block and thought ‘I need this’ – because it’s a hotchpotch hot rod it was the right car for me: not as expensive and reasonably fast. I drove it home and immediately started racing it, but for my whole first season my best result was one lap of practice!”

“When they change hands these cars sulk,” explains Andy. “It takes a year to sort them out. You’ve got to find your way with them, to learn how to make them your own.”

Eventually Dougal started winning, and he remains a front-runner among the Nash/GN group. And an inspiration to his son, who was indoctrinated into the ways of the VSCC at a tender age.

“I was always going to race – I was born into it,” confirms Wilf. “Dad bought me the Seven – the ‘Penetrator Special’ – when I was 13 and I’ve been fettling it ever since.”

“It should be called the Rotavator Special,” interjects Andy, as both older generations berate the youngster for his slightly overenthusiastic agricultural excursions – a natural part of finding your feet in historic motorsport.

“I’ve had to do lots of bits to make it VSCC eligible,” continues Wilf, undeterred. “I began doing events with the VSCC Light Car Section for sub-1500cc cars when I was 14 years and three weeks old – which is as young as you can do them.

“My first proper competition was the Chateau Impney Hill Climb in July last year [2019], and my first race was at Cadwell a month later.” 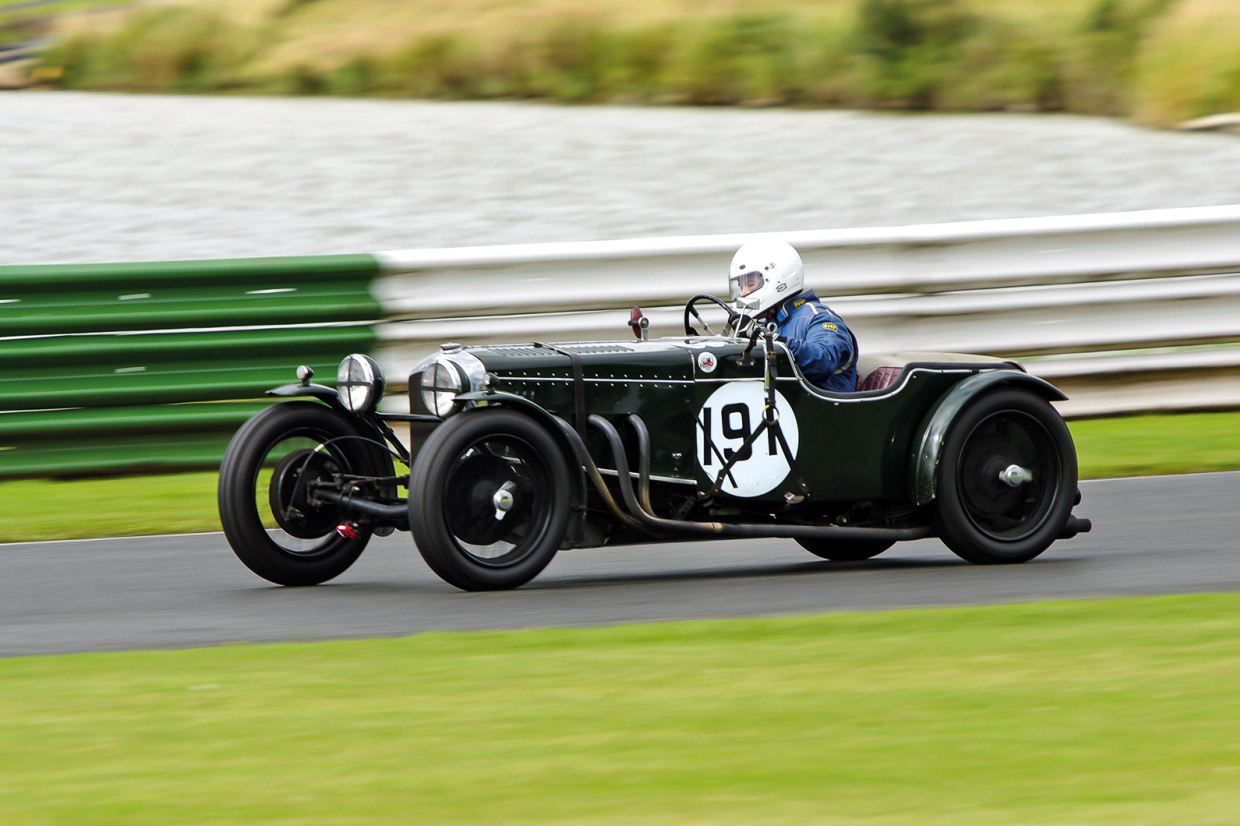 Back to Mallory Park in August this year and the trio endured an eventful 12 minutes as the highlight of the nine-race programme got under way.

“It was epic,” says Wilf. “I got a rubbish start because I jumped it then had to back off, but it was really good fun and Jonno’s car was great – a lot quicker than anything I’d driven before.”

While the youngest member of the family came home a creditable 11th, his grandfather remains cheerful despite finishing plumb last. “I even got to overtake another car,” he smiles.

“My car’s only got a three-speed ’box and at last there was someone else with a three-speeder. I managed to get past before breaking down after two laps.

“It was a shame, because we were fairly evenly matched so we could have had a real race.” 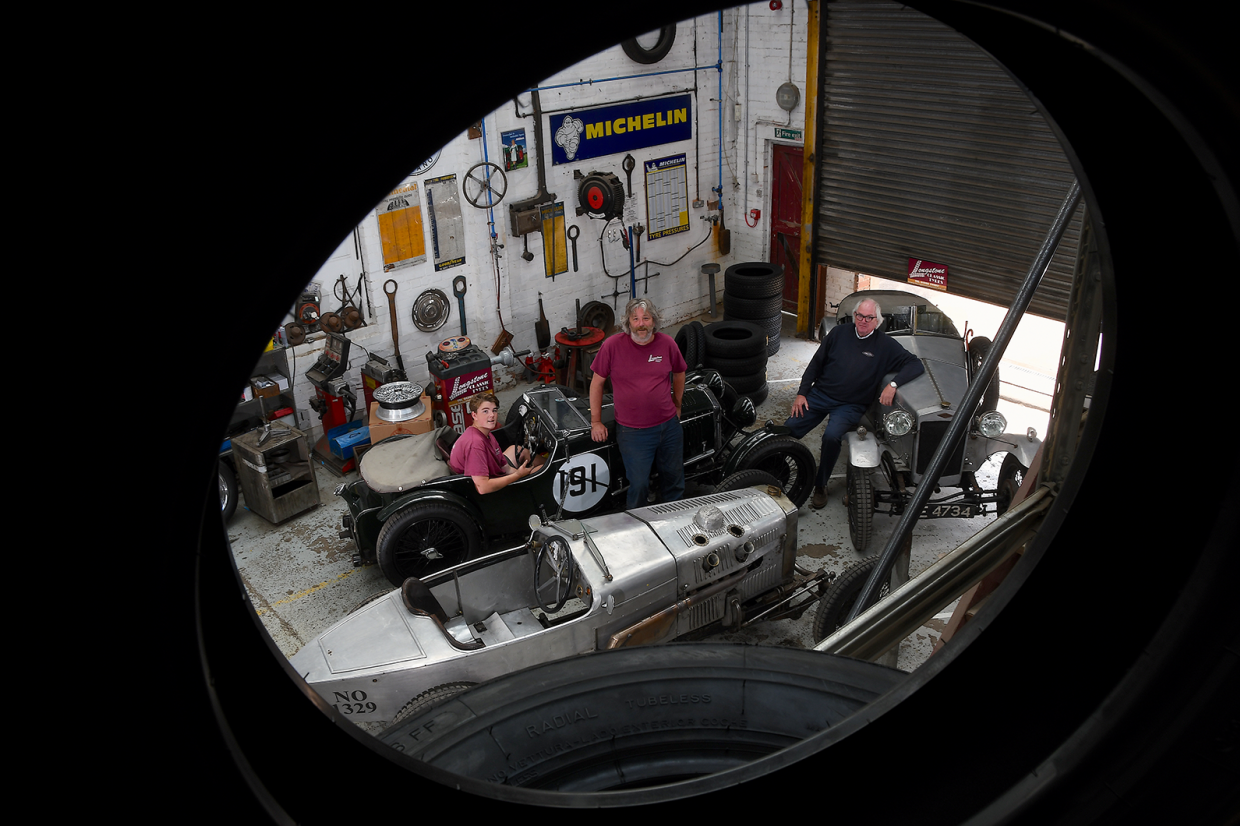 Expect more racing from this family

Dougal, meanwhile, used Piglet’s significant capacity advantage to roar into the lead from the star – “heroically,” he points out – before the demon-quick Patrick Blakeney-Edwards worked his way to his familiar place at the front in his Super Sports.

“It was ace,” says Dougal. “I remember coming up to the hairpin while trying to hold on to the leaders, thinking ‘I’d better let that car in front of me have space’ – then I realised it was Wilf, and he saw me and let me through, which was wonderful. I ended up finishing third, but drove it home afterwards.”

With their first family competition out of the way, is it time to settle down to a quieter life? Not likely…

“I’ve just thought of something,” exclaims Andy.“We’ve now got the opportunity to do a three-generation ‘Pom’!”

“Can I do it in the limo?” chimes Wilf. Truly a chip off the old block, just like his dad.

Thanks to Longstone Tyres; the Vintage Sports-Car Club

Mercedes-Benz 540K: the gift that keeps on giving