The HRG 1500 that has finally come full circle 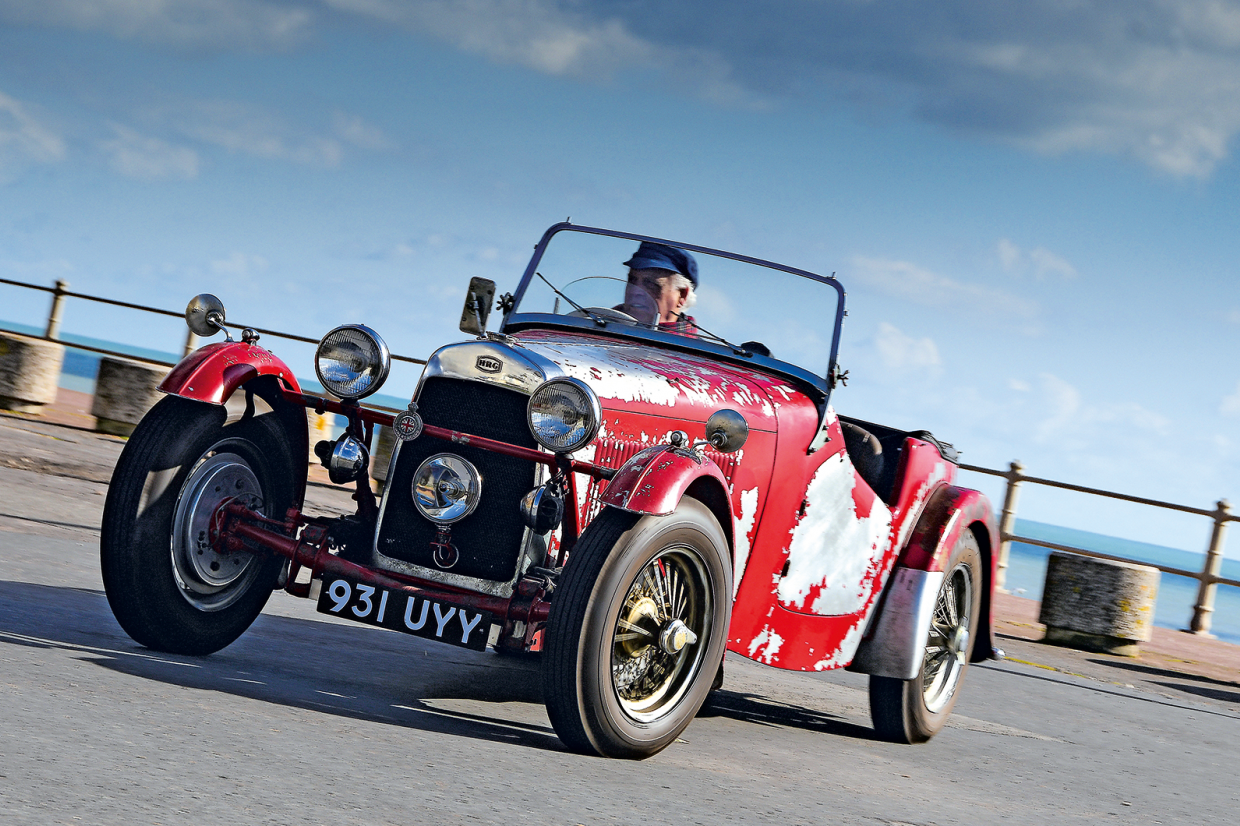 Open the centre-hinged engine cover, careful not to disturb the irreplaceable patina of the flaking 65-year-old paint, and scroll past the overhead-cam 1496cc Singer ‘four’ to the bulkhead.

Had we not run out of phone numbers long ago, you could dial the ‘Hastings 539’ that’s written beneath the words Moore & Tye on the coachbuilder’s plate and still reach Ian ‘EJ’ Jenner today.

Not too long ago his dad, Alan, would have answered instead. 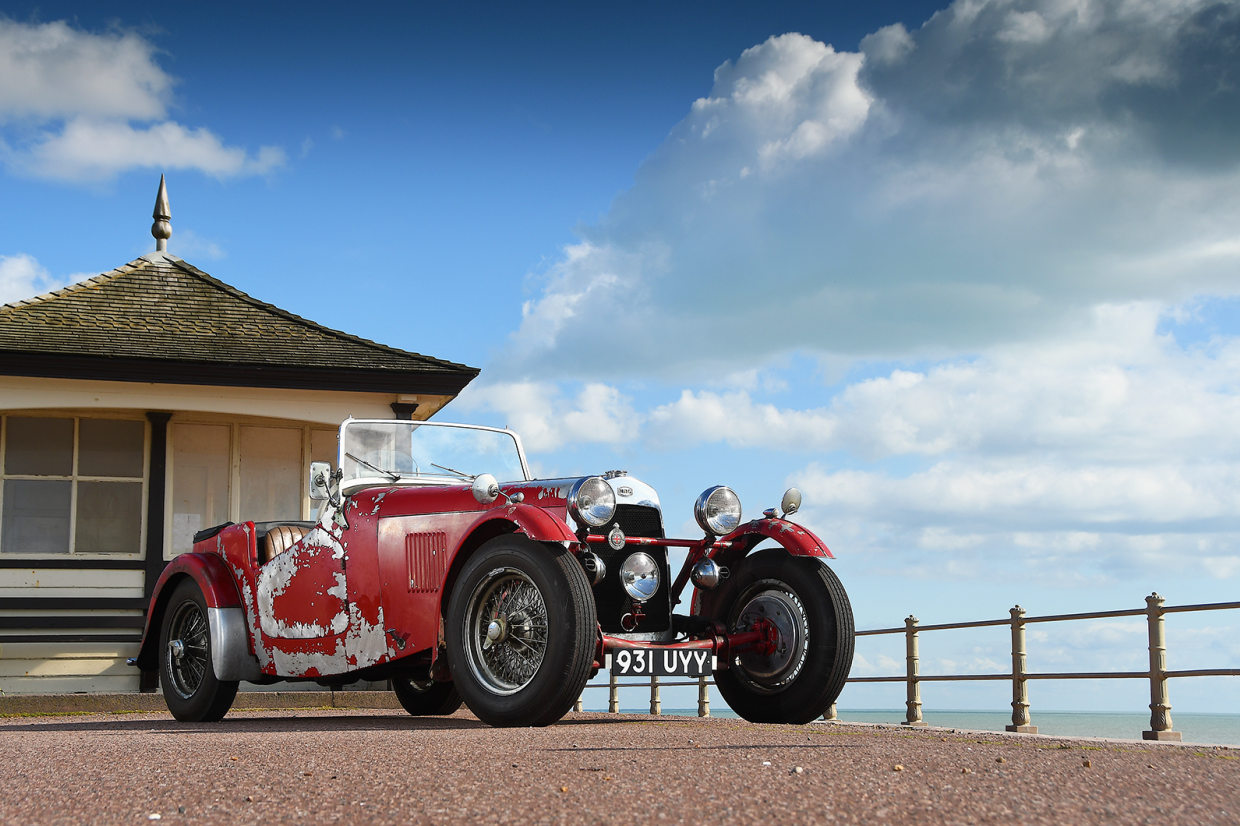 Back where it belongs

The company’s name has changed, but the 539 remains in the phone number for Hastings Motor Sheet Metal Works.

Which is a handy reminder for Alan because, after his son’s long and secret on-and-off search, the HRG bodied down this secluded street off Hastings seafront is now Alan’s to use and enjoy as much as he wants.

The sports car is an example of the marque’s most numerous model, the 1500, and is one of the last built by the now-defunct ‘Hurg’. It is also one of the final six bodied by Jenner Snr and the small team on Caves Road. 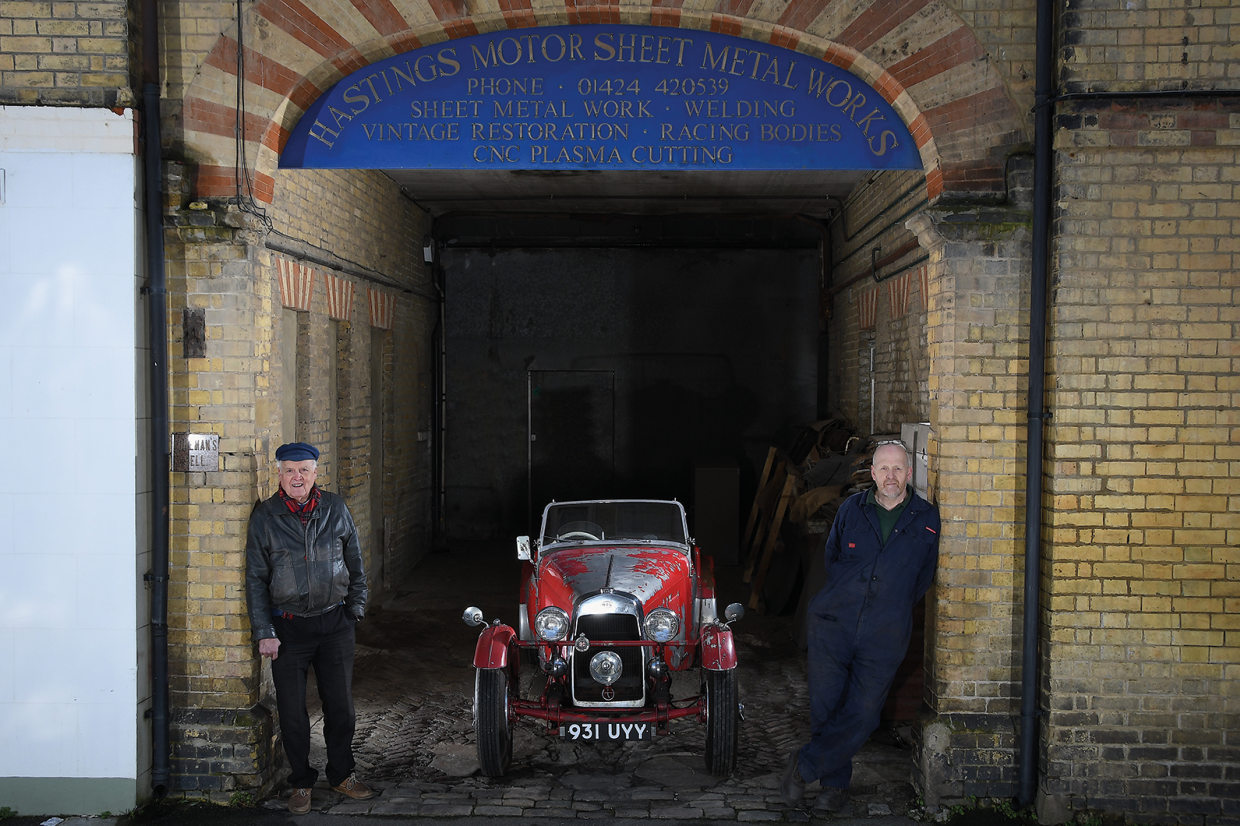 The HRG 1500 with Alan (left) and ‘EJ’ Jenner, two generations of metalwork wizardry

“I don’t know what’s happened to the paint,” says Alan. “It was done there,” he adds, pointing to a gable-roofed building across the road next to the old workshop.

The Carnation Red’s ongoing campaign to part from the aluminium is half won, revealing its bodymaker’s handiwork to be good as new: tight gaps, even curves and welds unnoticeable.

This is a genuine survivor with fewer than 30,000 miles beneath its thin wheels. 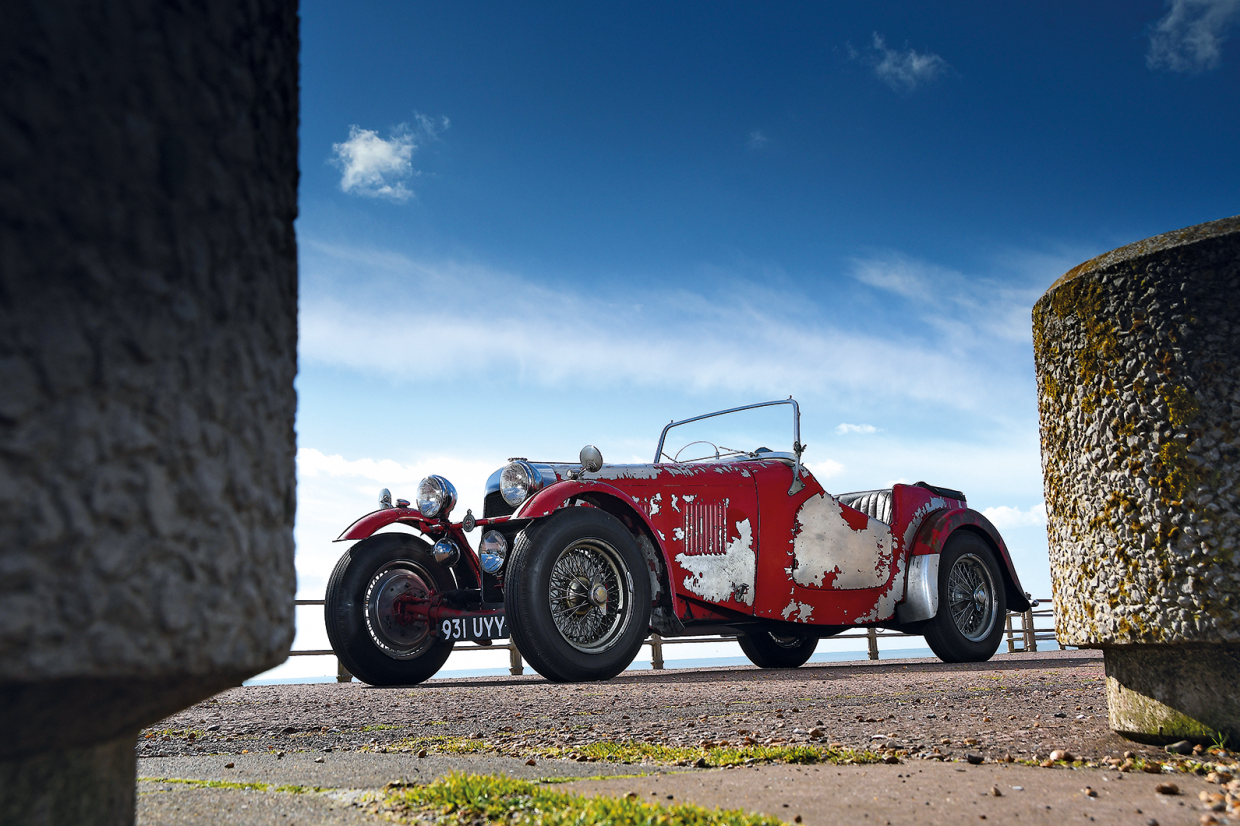 “We used to go and get the chassis from Tolworth – that was the best part, driving back with just a bucket seat on the chassis”

“We used to go and get the chassis from Tolworth,” 88-year-old Jenner recalls. “That was the best part of the job, driving back with just a bucket seat on the chassis, in all weathers.

“You can imagine it, can’t you? We only had two trade plates, so the first car had one on the front and the other bloke had the rear one on.

“One day I was sitting in a cafe halfway up Riverhill, near Sevenoaks, having a cup of tea and a bun. This motorcycle cop pulled up and started going around the car park; when he came in the door I thought, ‘Oh look out, he’s going to have me here,’ but he didn’t notice me!” 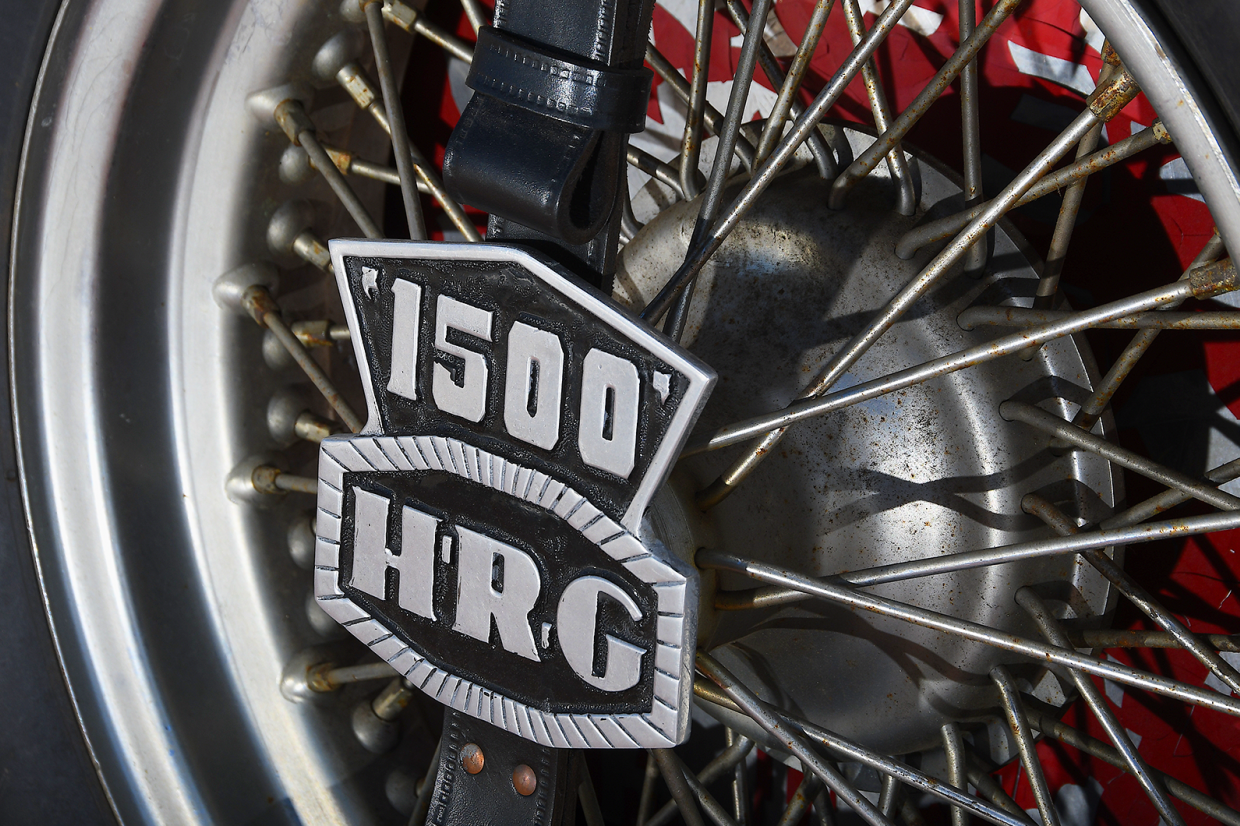 This example is a late HRG 1500, the firm’s most numerous model

These last Hurgs had been Jenner’s way back into coachbuilding.

“I served my time as an apprentice on HRGs at St Leonard’s Engineering,” he says. “National Service was supposed to be at 18, but if you were an apprentice you could have it deferred until you were 21. That happened to me and, funnily enough, HRG Engineering didn’t produce any cars while I was away in the army!

“I was serving out in Malaya and my mate airmailed me saying, ‘There are six more HRGs to do – are you interested? It’ll give you a chance to get your hand back in.’ I jumped at the opportunity, and I’ve been here ever since.”

That Jenner was just three years old when the 1½ Litre – renamed 1500 when a Singer engine replaced the Meadows unit from 1938 – was first produced and began working on them two decades later goes some way to explaining this late 1955 car’s dated appearance. 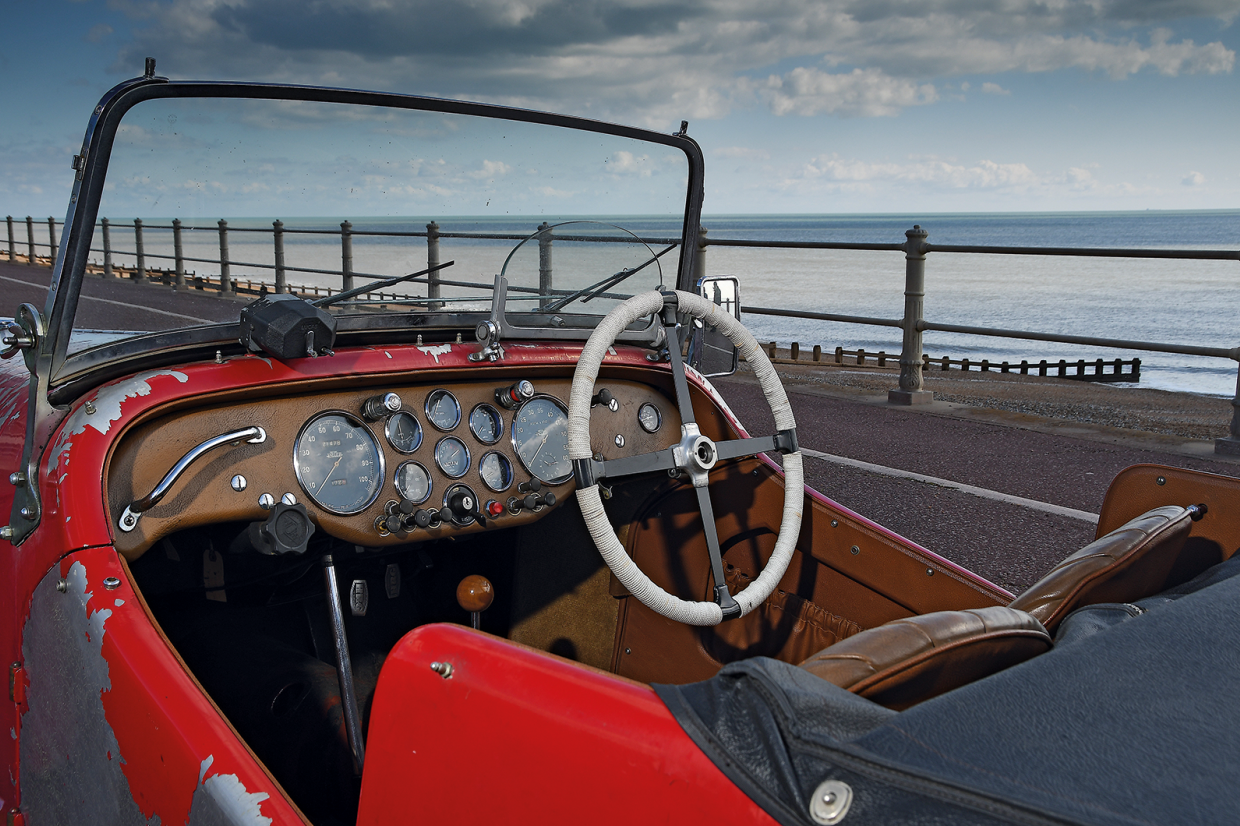 The large four-spoke wheel dominates the cockpit, and the aeroscreen comes into play when the main glass is folded down

Aerodynamics are not even an afterthought to its barrel body, indicating is still very much a job for the driver, and any suggestions of there being a brake servo are quickly dismissed by its owner.

But remember that HRG – its name derived from those of company founders Major Edward Halford, Guy Robins and Henry Ronald Godfrey (who also provided the ‘G’ in GN) – was a tiny firm, only expanding to 80staff for the war effort, rather than car demand.

Limited parts supply slowed production after WW2 – Jenner remembers having to barter and bribe for stocks of aluminium, and getting his eye in on smaller panels such as stone guards – and the finishing of HRGs became a very Hastings concern based around Leslie Tye’s coachbuilding firm, Moore & Tye. 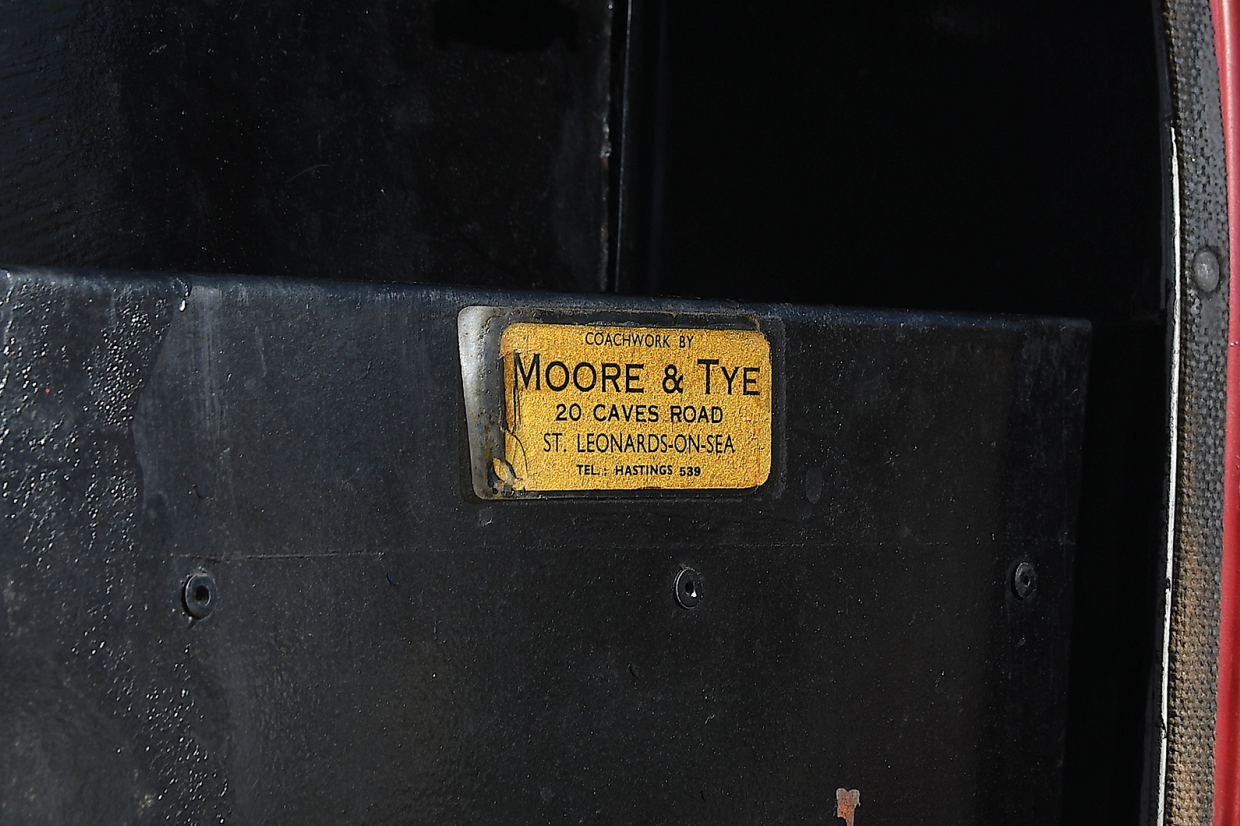 The original coachbuilder’s plate reveals the address to which the HRG has returned, some 65 years later

“We’d build the bodies here and put them on the chassis,” Jenner recalls. “Old Arthur Rothon made the frames and did such a good finish on the wood that you could just bend the metal over it and the panels would be perfect.

“A local bloke, Uptons, used to do the trimmings and the firm is still there; he was brilliant. The cars would go back almost ready for the customers – all HRG had to do was put on the wipers and the headlights.

“One day I took one back in the pouring rain, with no wipers yet, and water was coming in through the floorboards. This nice new car, with anew carpet, it was disgraceful really.

“I missed my turning near Redhill and asked an old boy how I could get back on the Purley Way. ‘Go back through there,’ he said, ‘through the field to the five-bar gate and you’ll come out on the main road.’ In this brand-new motor!” 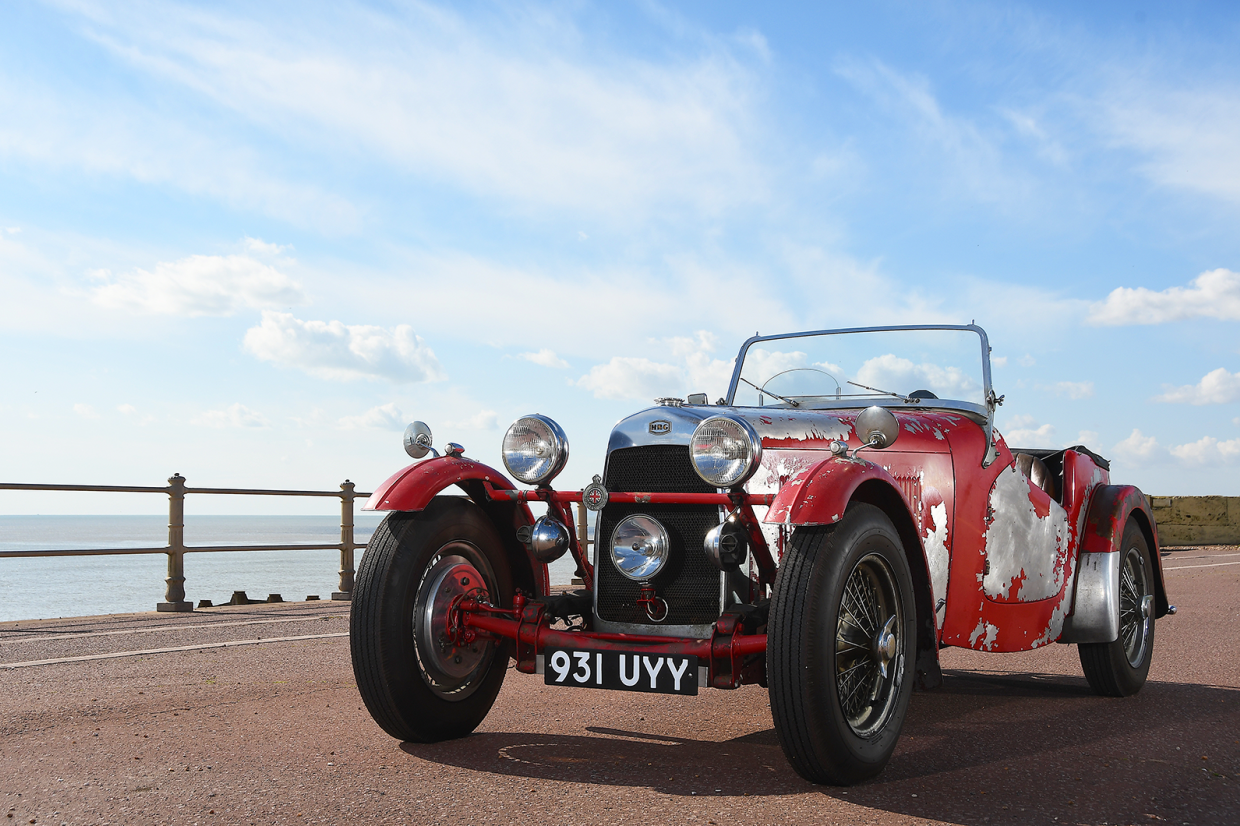 In 1956, the year the final six 1500s were shipped to America and HRG was wound down, Jenner found other local work filing its way through the building when Frank Nichols formed Elva nearby.

“We did a lot of bodies for Elva,” he says, “up to the MkV, I think. We were seldom given a drawing. Elva used to produce a new chassis and Frank would say to me, ‘Can you come up? I need you to fashion a body.’

“So I’d go up to Sedlescombe Road, and once he said, ‘Just make it flow tight to the wheels and radiator, and see what you finish up with.’

“He and my mate were shaping the back end, faffing about, so I went round and Frank said to me, ‘You look as if you could spit.’ I said, ‘Well look at the bloody thing, it looks like an Austin Chummy. This is a new racing car!’” 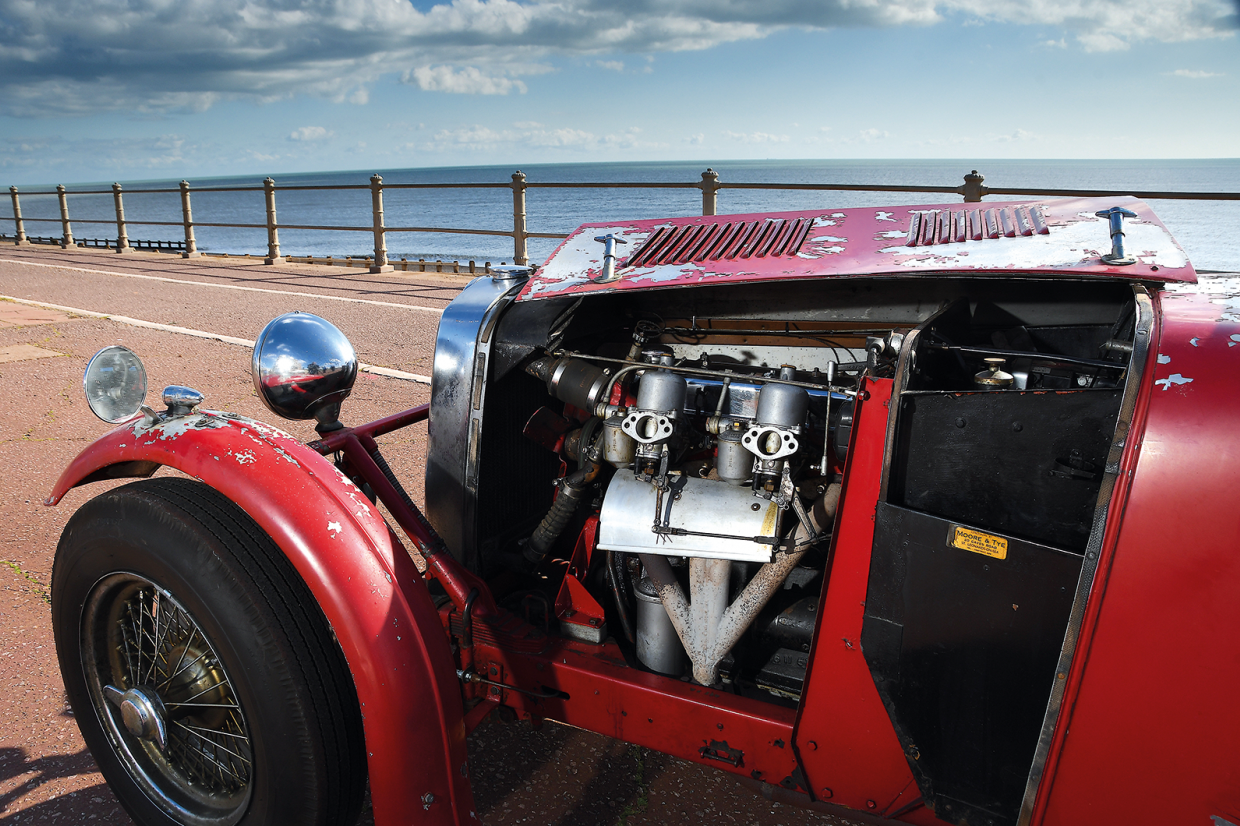 Still not really retired, as recently as 2009 Jenner built the body for the Elva MkIII that’s in the Bexhill Museum by eye – and muscle memory, presumably.

“It was a very nice-looking body, like a Bluebird Land Speed Record car,” reckons Jenner.That connection with Terry brought in some BRM Formula One bodies, too: “We went to Goodwood once, but it was that wet we would have done better with a boat.”

The Ford GT70 was also built on the top floor of the firm’s old workshop, just over the road: “They had to lower it out of the window on to the street. We didn’t do too much because it was glassfibre, but I made the bumpers and things.

“Ford’s people were in this yard when it didn’t have a roof, and if you moved from your spot someone would jump in. It was absolutely mad.

“There were only about four or five of us; Ford brought an army. There was one bloke who, if any of them needed something – even one bolt – would know where to get it, although he was in a strange place.” 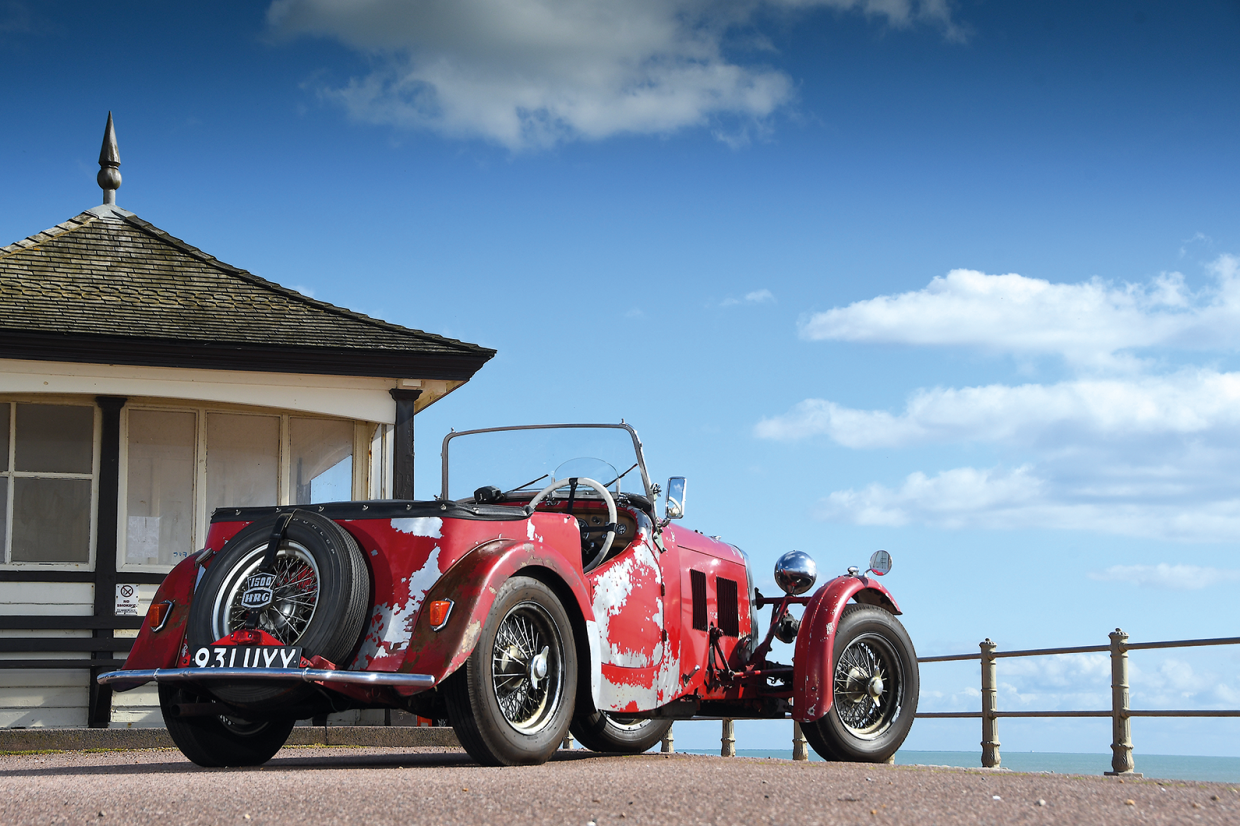 American-spec wheels and bumper on this car

Soon a partner in the business and then owner, Jenner’s firm took on the personal projects of wide-eyed believers, such as the man who wanted a Lamborghini but owned a Jensen, and one Colonel Rixon Bucknall, who was after an old-fashioned MG-style body to wrap a Jaguar XK140 chassis and C-type-spec engine (C&SC, September 2006).

“These top-line craftsmen turned out exactly what I wanted,” the Colonel told a newspaper.

A four-seater MGB followed, and all sorts of repair work continued to fill the shop – literally in the case of the huge Merlin-engined Handlye Special – as the Jenners kept alive the precious art of coachbuilding in the area. 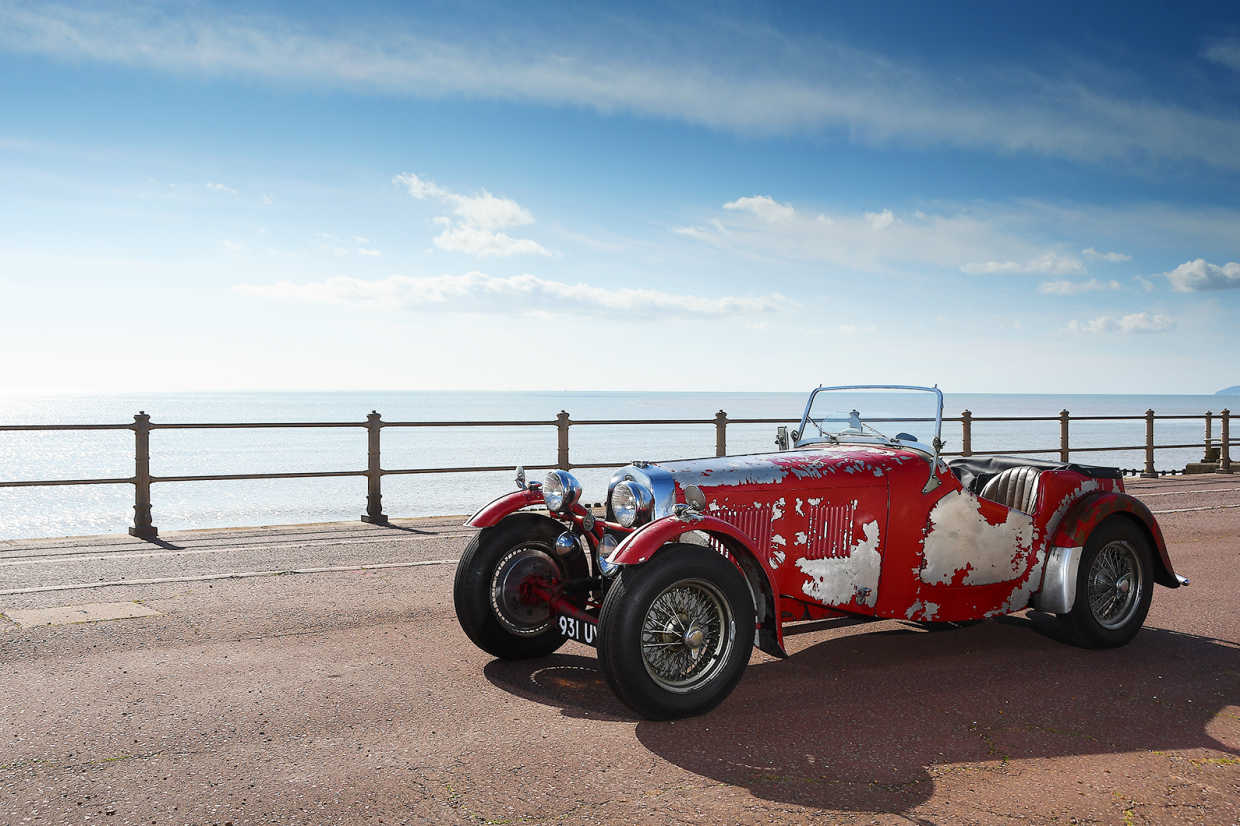 “I’d been trying to get an HRG for 30 years,” he admits, “just periodically checking. Then one day I thought, ‘Let’s go and have a little look online…’ And – bingo! – there was one of Dad’s cars.

“The seller wanted a lot, and came back asking for my best offer. He dropped it a few thousand dollars, and then he cottoned on to me. He said, ‘You know something about this car, don’t you?’

“I explained, and he told me to offer again because he was selling it on behalf of someone who’d died. It was well out of our price range, but this was just meant to be. I was going to surprise Dad but I was too excited.” 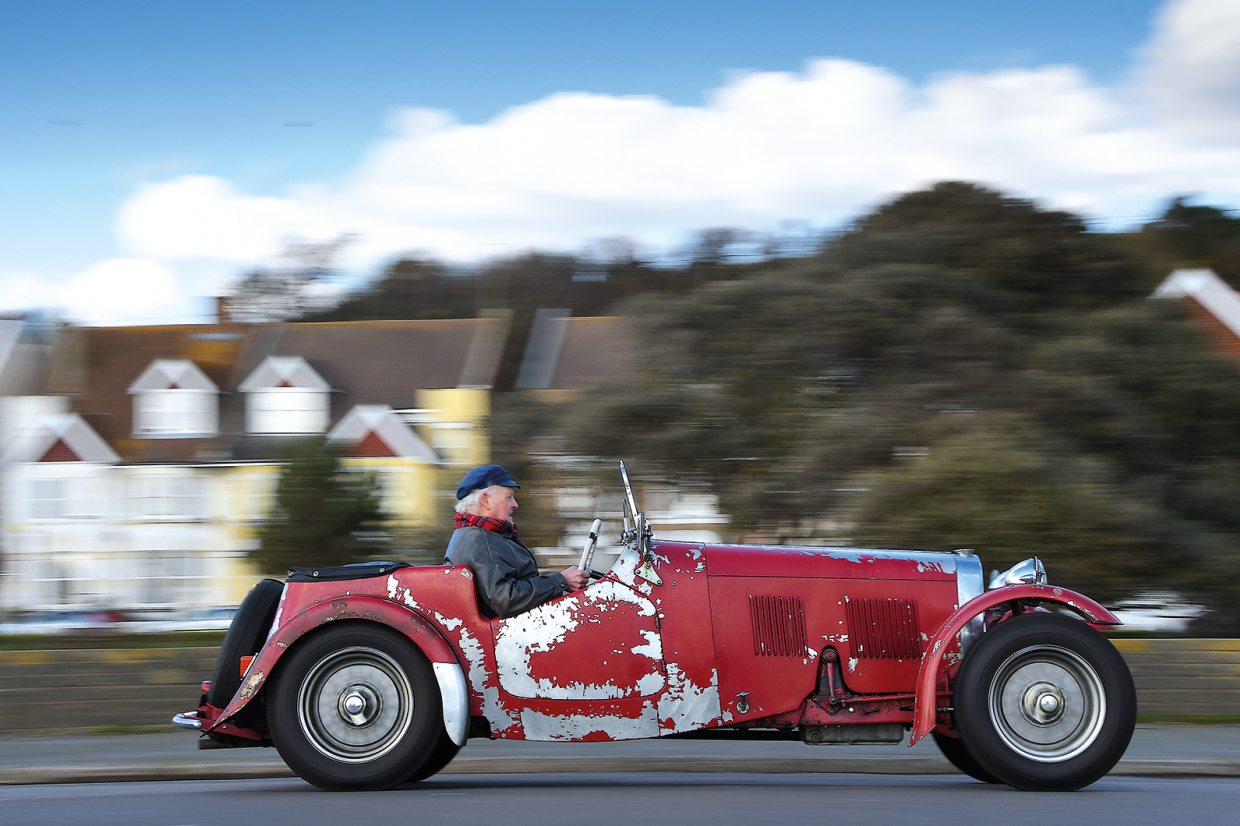 Jenner back behind the wheel of the ‘Hurg’ – this time wearing bodywork!

“We put new master cylinders on, fuel lines, cleaned everything through and it fired up. A float in one of the SUs had a hole, so we soldered that up and it was as if it had been running all this time; I was astounded.

“I was gobsmacked by the originality of it. All we’ve added are the aluminium seat bases, which were missing, and we’ve had them retrimmed by the grandson of the original trimmer.

“He’s going to remake the hood, too, and he’ll then age the bases. The rear bumper was for the American market only, but we’ve left it on for now.

“If we restored it, Dad wouldn’t get to drive it and I’d sooner he has as much fun as he wants. I like it like this, anyway.

“He’s going to make some front wings – the patterns are still here and so are the rears, which is how I was able to make a new set to go to an owner in Ireland. We’ve got them for the radiator shell and bonnet, too.” 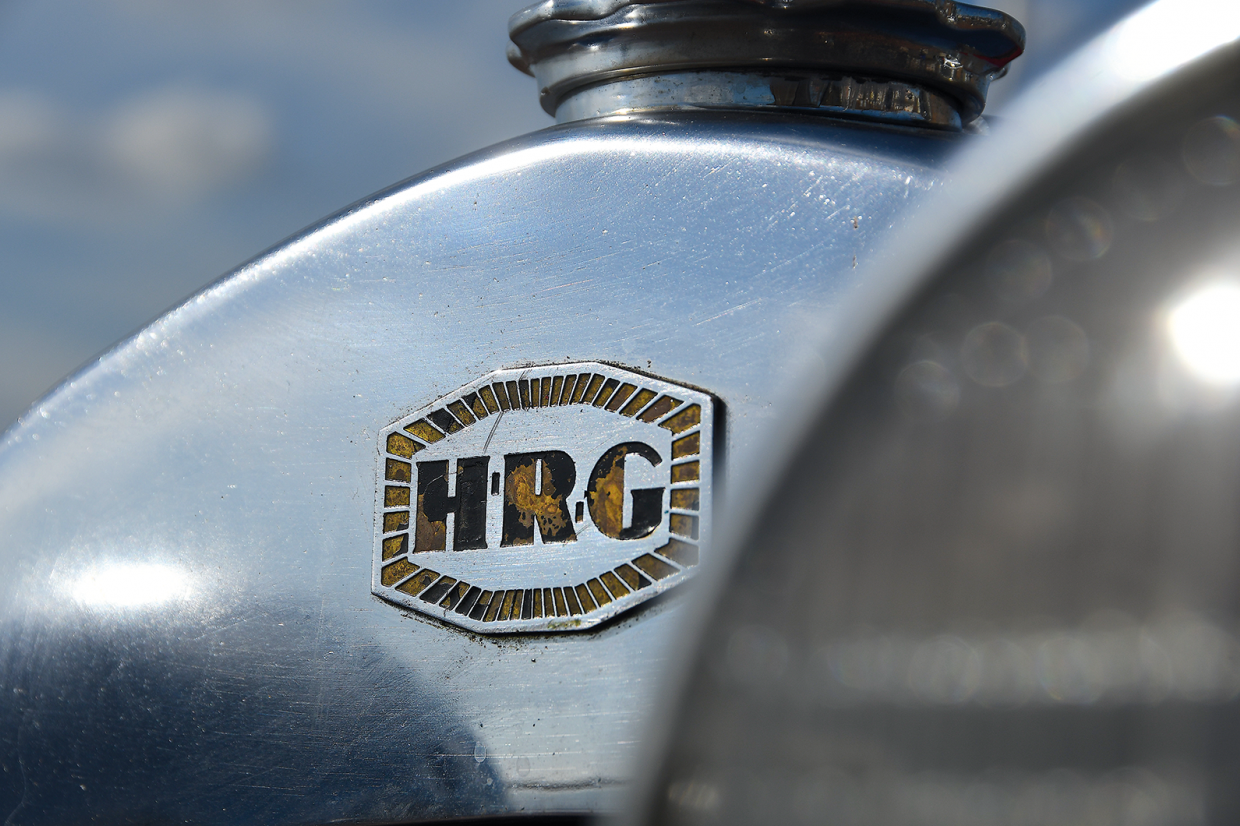 On the front lamp-bar is a badge from the American owners’ club, beside a period-correct spotlight found in a local junk shop.

Happily, the HRG Association had documented the car’s history.

Charles Glore of Chicago bought it new from the importer, Jack Wherry. Robert Collins came next in 1961, and sold it to fund a Bugatti T57C – but not before fitting a grabhandle on the dash that remains today.

Peter Kean was the third owner, for more than half a century. 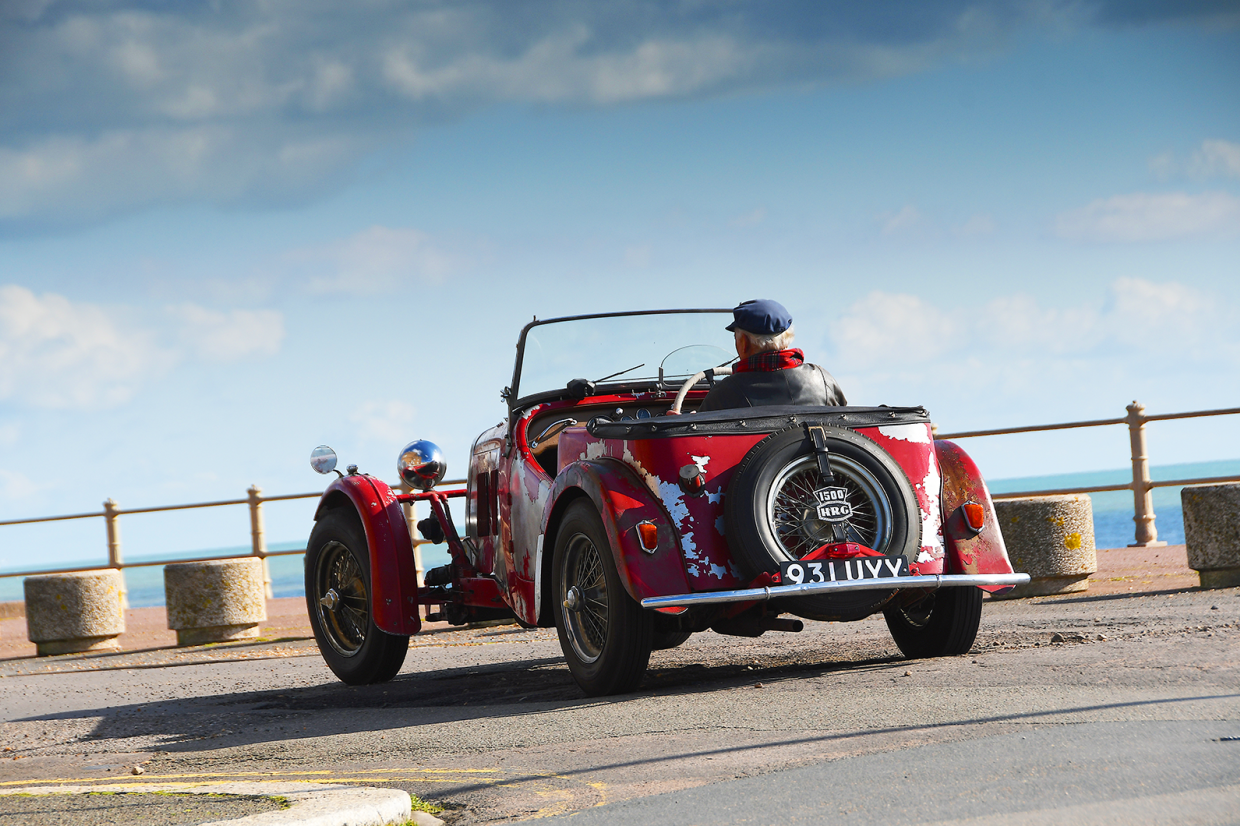 The HRG 1500 continues to be enjoyed

When it fires on the seafront, where many of the cars that followed it were photographed, the Hurg soon settles to a smooth idle.

“Like a B,” says Ian of its warm tone.“It struggles a bit at low speeds, and prefers to pull away assertively.The SM engine has a short stroke, making it revvy, and some owners are getting up to 120bhp.”