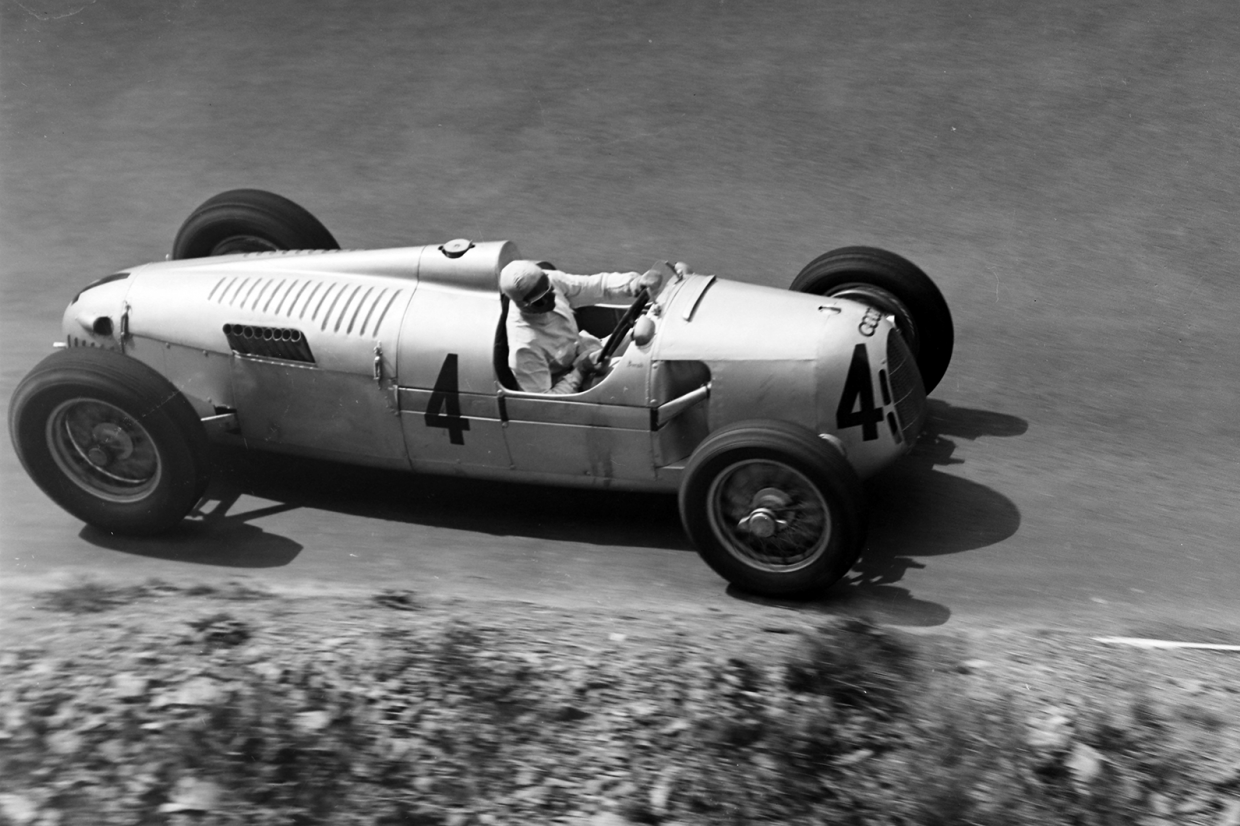 By nine o’clock on the bitterly cold morning of 28 January 1938, Rudolf Caracciola had broken Auto Union’s mile and kilometre records.

The Mercedes-Benz ace had reached 270mph on the two-lane autobahn between Frankfurt and Darmstadt, but noticed that a strong crosswind was developing and, not surprisingly, admitted to being unnerved by the experience.

Caracciola advised his great rival Bernd Rosemeyer against running, but the Auto Union team was keen to strike back so Rosemeyer climbed aboard the streamlined car and set off. 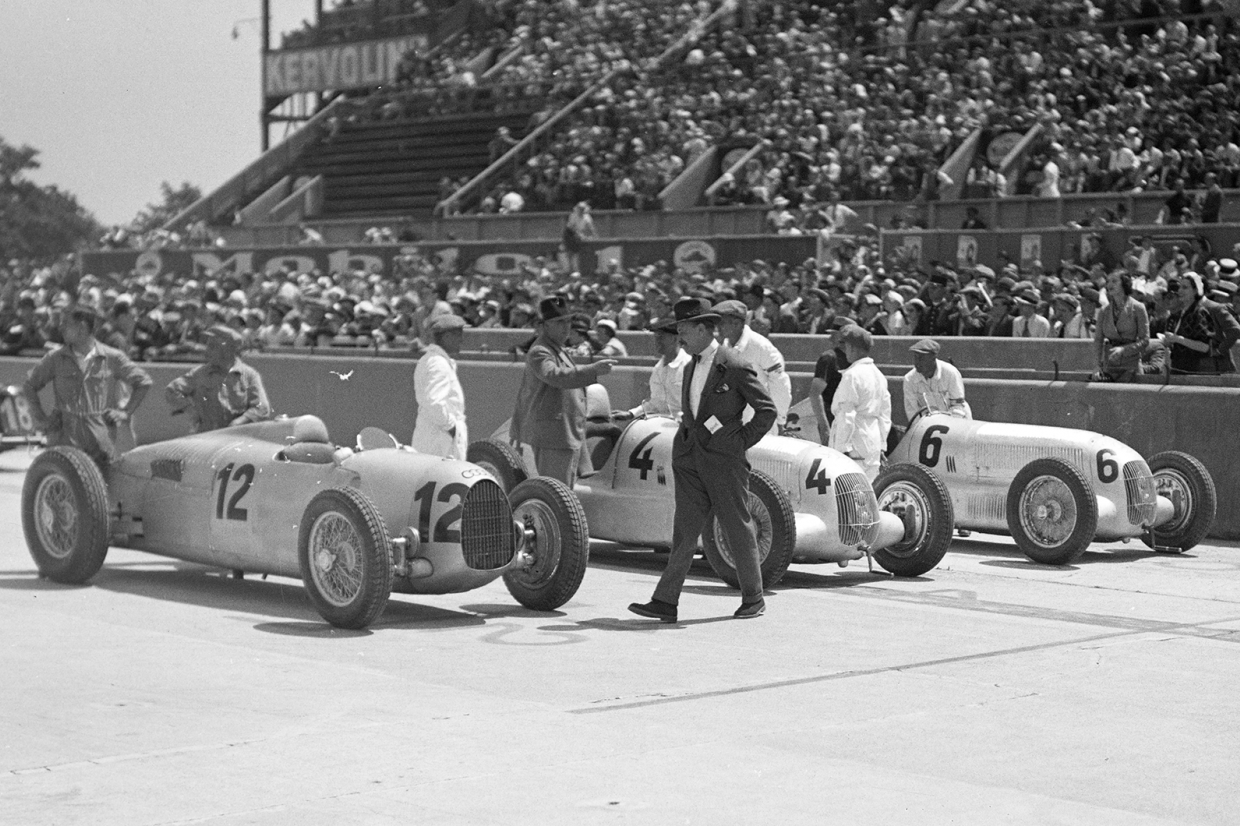 He was timed at 268.7mph on his return run but noted that the engine was not fully coming up to temperature. The mechanics blanked off more of the radiator and he went out again.

Shortly afterwards came a report from an official at the 9.2km marker – the car had crashed.

Running at maximum speed near the Morfelden Crossing, it had apparently been caught by the crosswind that Caracciola had warned him about.

The wreckage was strewn over several hundred yards and Rosemeyer had been thrown out. He was found in the forest alongside the road, on a spot that is now marked with a memorial stone. 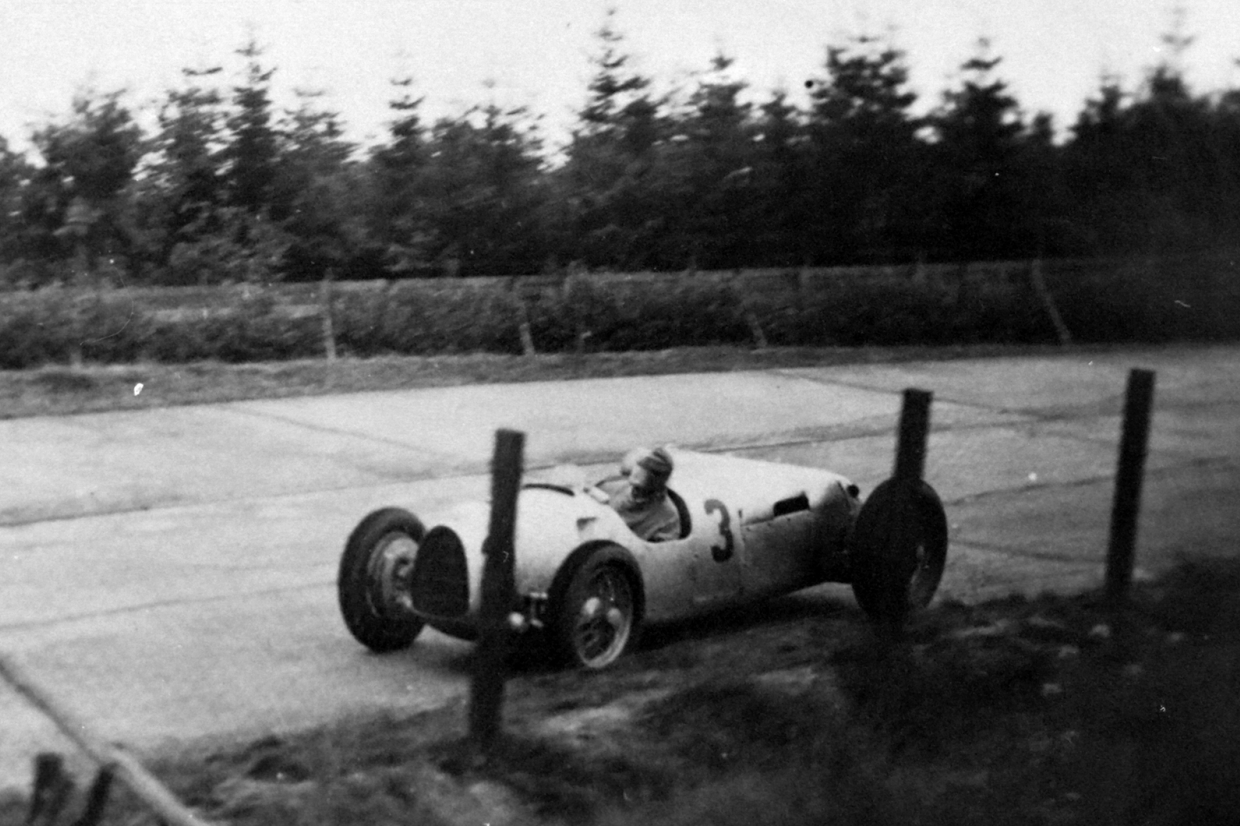 Rosemeyer was 28 when he died and had been a Grand Prix driver for only three seasons, but even in that short space of time his speed and his personality captured the imagination of countless enthusiasts – and have continued to do so ever since.

The Mercedes and Auto Union teams dominated Grand Prix racing between 1934 and 1939, and while the latter also employed the likes of Hans Stuck, Achille Varzi and the great Tazio Nuvolari, it was Rosemeyer who delivered many of its most significant wins and memorable moments.

All of which is even more remarkable when you consider that the first time he drove a racing car was during trials that Auto Union held at the Nürburgring in October 1934.

Until then, he’d been a successful motorcycle racer, riding for the works NSU team in 1933 before switching to DKW. 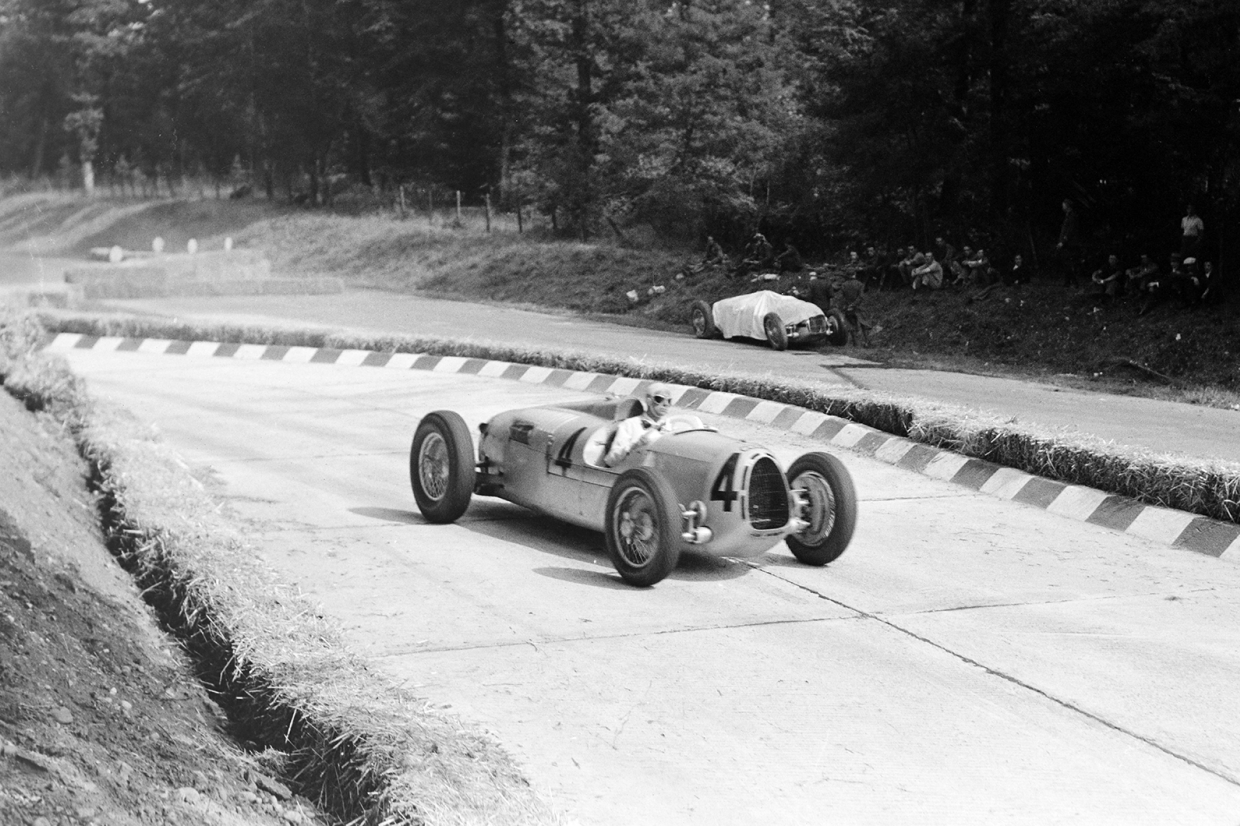 Rosemeyer en route to victory at Monza in ’36, teammate Hans Stuck’s Auto Union covered by a sheet after crashing, is seen in the background

His two-wheeled adventures had started while he was still in his teens and his antics around his hometown of Lingen eventually led to the police confiscating his licence in late 1929.

In response, Rosemeyer wrote a letter that was addressed to Father Christmas but delivered to the local police station.

‘Just as a bird needs the air and a fish needs the water,’ he wrote, ‘so Bernd Rosemeyer needs his motorcycle… In future I will always be well behaved and will never again upset the police. I therefore ask nothing more from you this Christmas than the licence in the name of Bernd Rosemeyer.’

It worked, and his licence was returned. 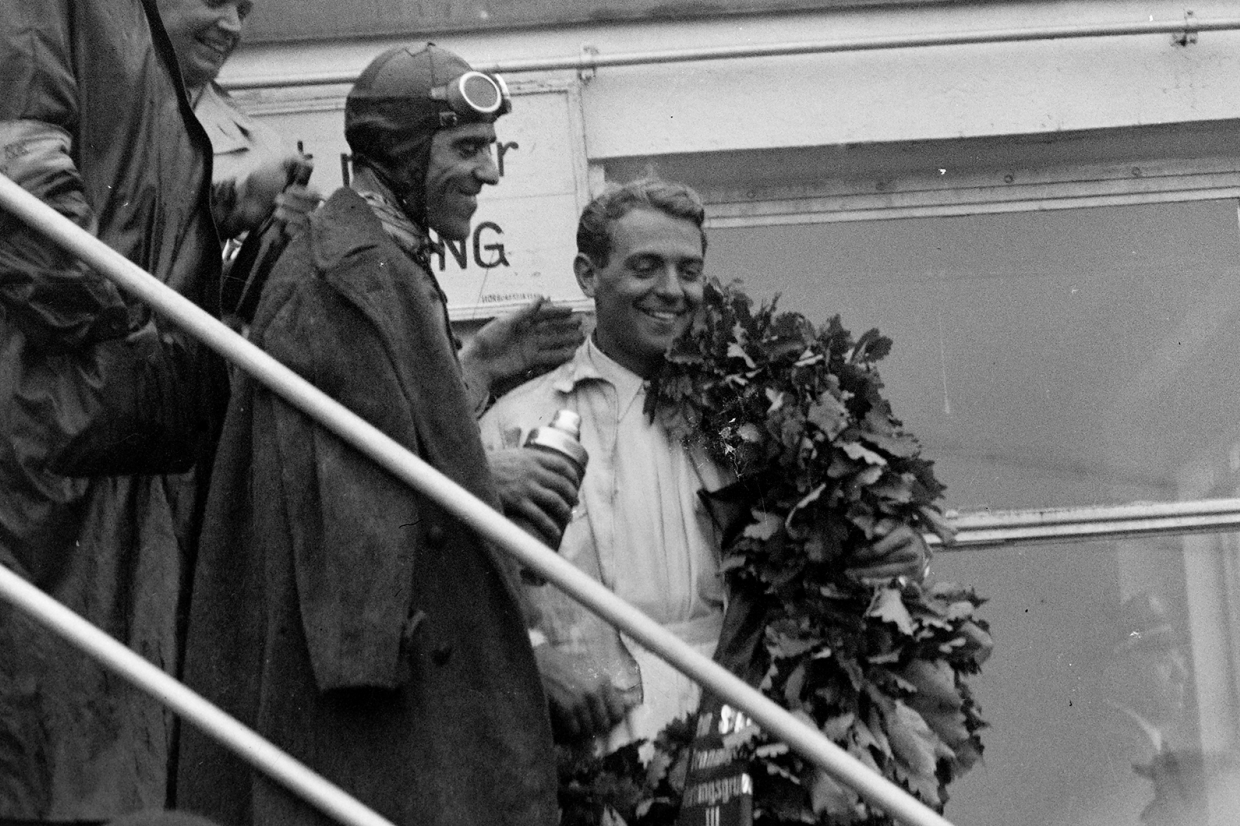 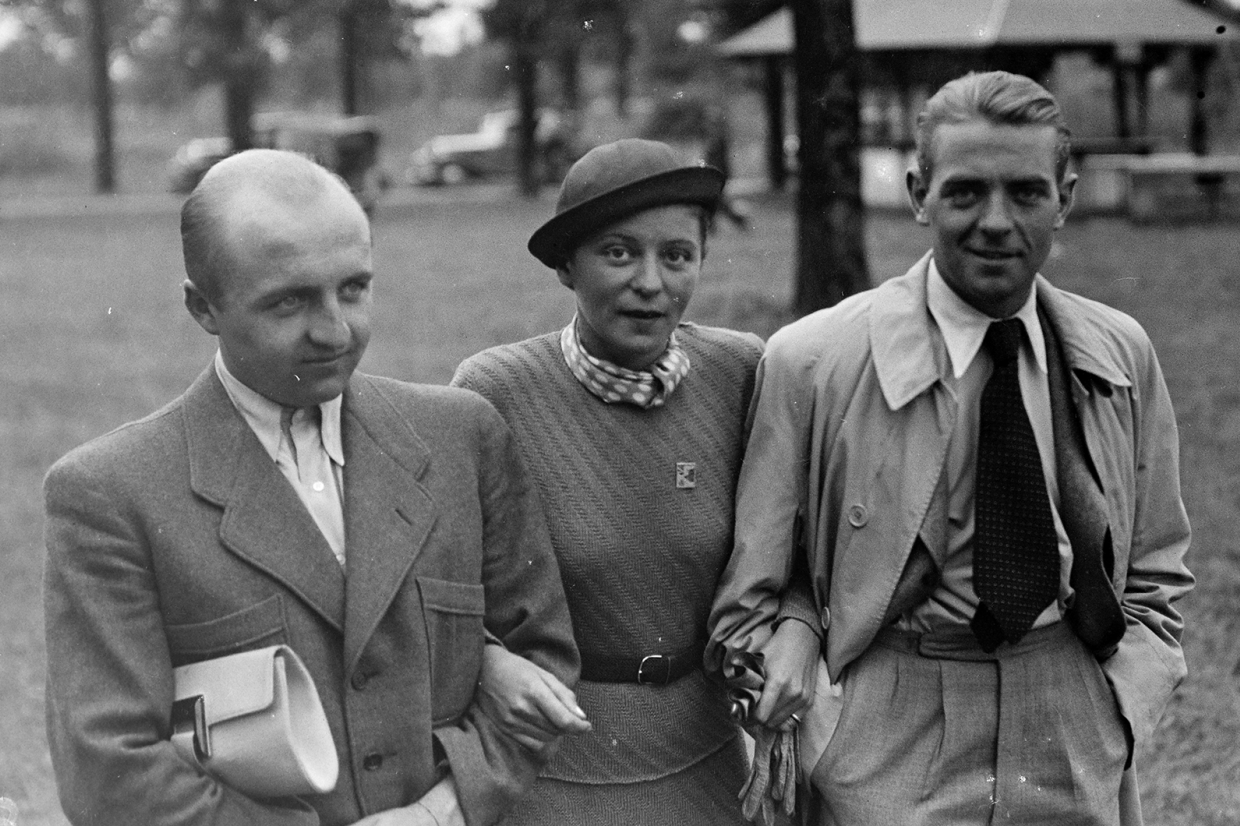 After performing well at those Auto Union trials – he was second fastest of the 12 hopefuls around the Südschleife and third fastest around the Nordschleife – he was offered a drive for 1935, initially in a support role for regular drivers Stuck and Varzi.

He made his debut in the Avusrennen, where he retired, but next time out at the Eifelrennen he finished a sensational second to Caracciola’s Mercedes. Auto Union had found a new star.

Rosemeyer was smitten and they got married in July 1936. Their son – Bernd Jnr – was born in November 1937 and was only 10 weeks old when his father died. 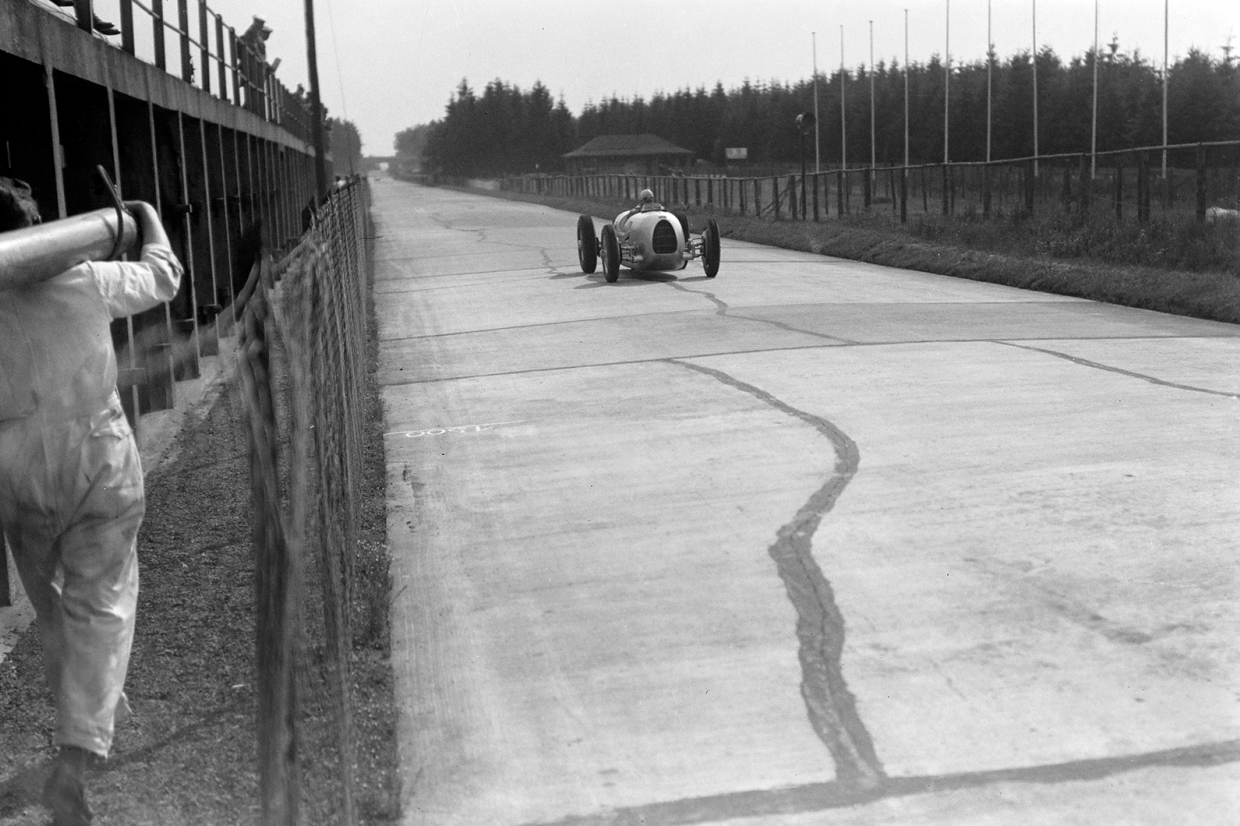 In terms of outright success, 1936 was Rosemeyer’s finest year.

Mercedes had struck back with its formidable W125 and assembled a stellar driver line-up, but Rosemeyer refused to accept defeat.

Driving the rear-engined Auto Union at ten-tenths all year, he was the only person capable of offering any resistance. 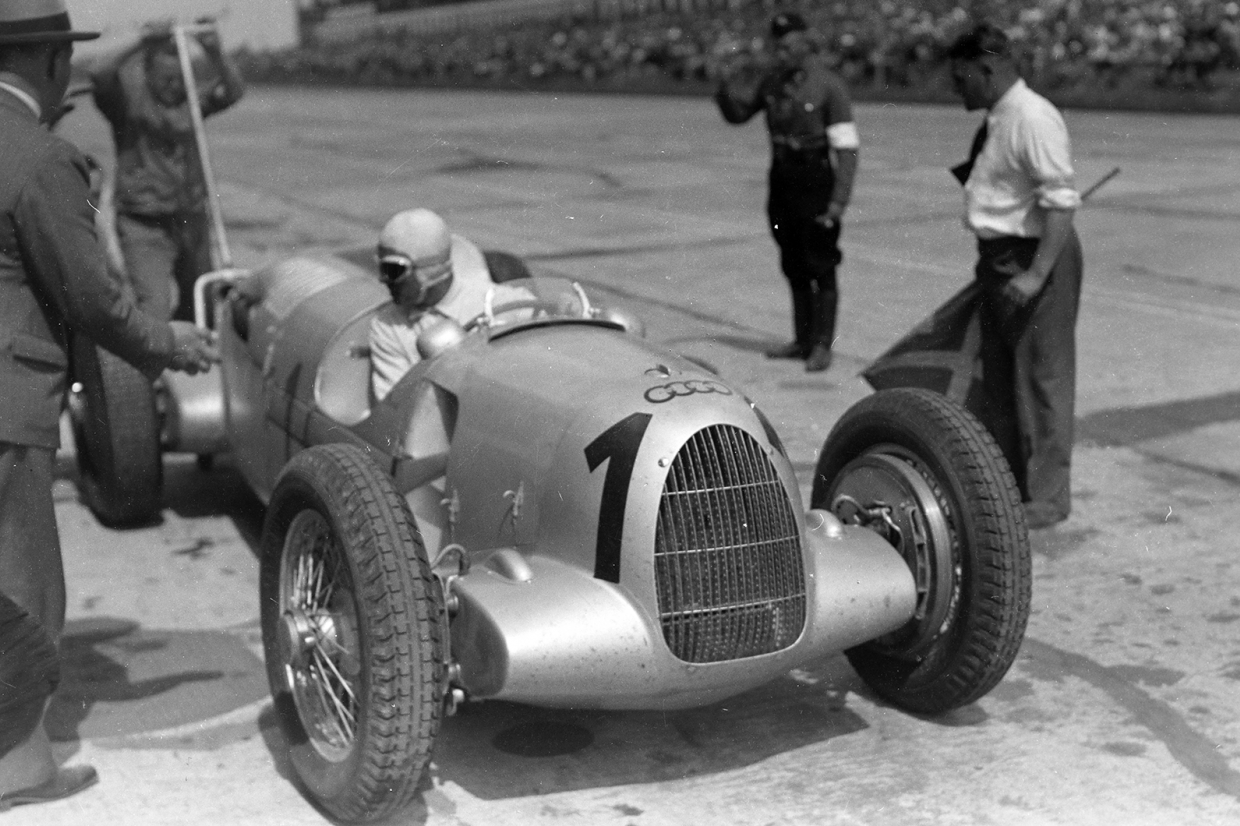 Pitting at the 1937 Eifelrennen, which he also won

At Pescara during the Coppa Acerbo, he struck a kilometre marker with a rear wheel while trying to make up time after a pitstop.

Not long afterwards, the wheel disintegrated completely and Rosemeyer drove to a fortuitously sited tyre depot on the brake drum.

After it had been replaced, he overhauled Caracciola – whose Mercedes eventually dropped on to seven cylinders – to take victory. 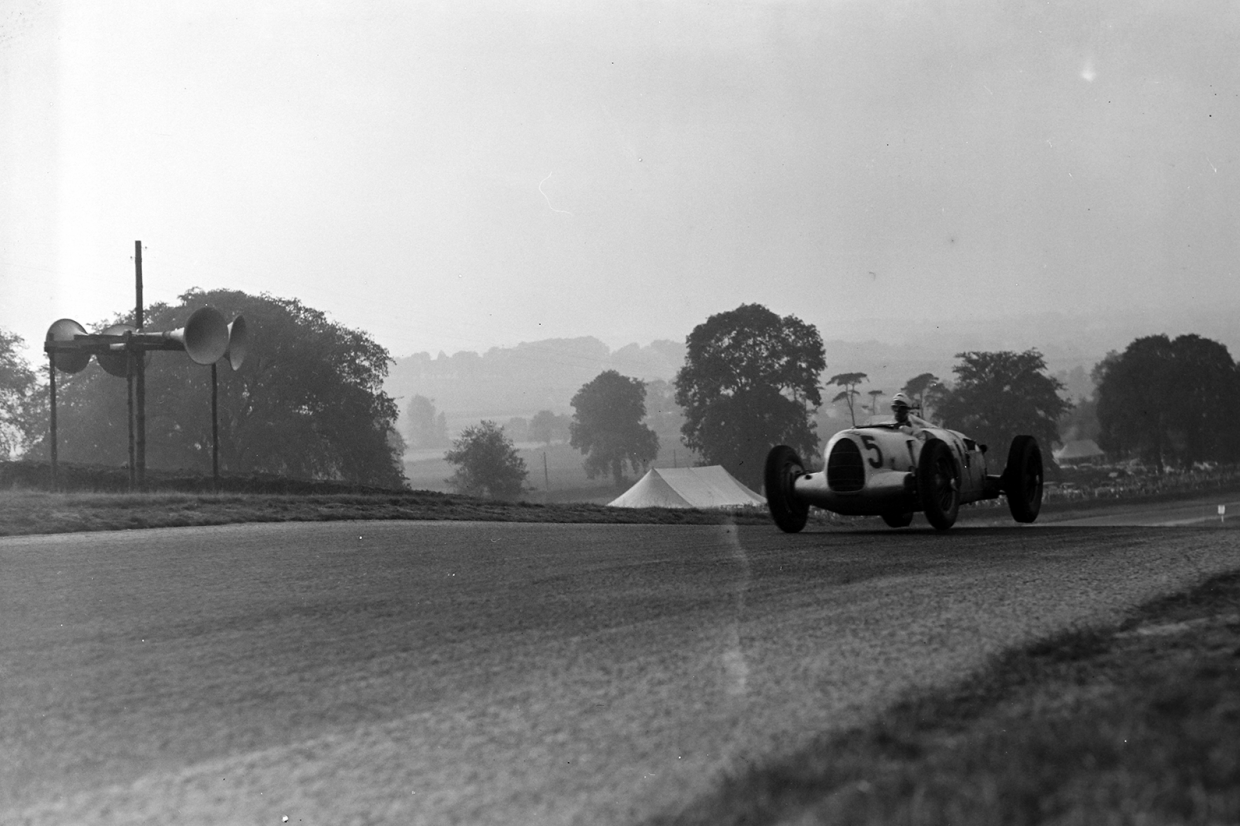 Rosemeyer and Auto Union won at Donington Park in October 1937

He won again at Donington Park in October after a long dice with Manfred von Brauchitsch that was settled only when the Mercedes had a late tyre failure.

On race day, the bookies had given the two men odds of 5:1, the same as ERA driver Raymond Mays. Blind patriotism might have been in play – Mays’ best practice time had been 2 mins 26.2 secs; Rosemeyer’s best was 2 mins 11.8 secs…

After the race, it was discovered that the bookies had done a runner and it was left to the Derby Club to pay out the winnings to those Auto Union mechanics who’d heavily backed Rosemeyer.

To cap it all, there was no playing of the German national anthem to honour the victor. 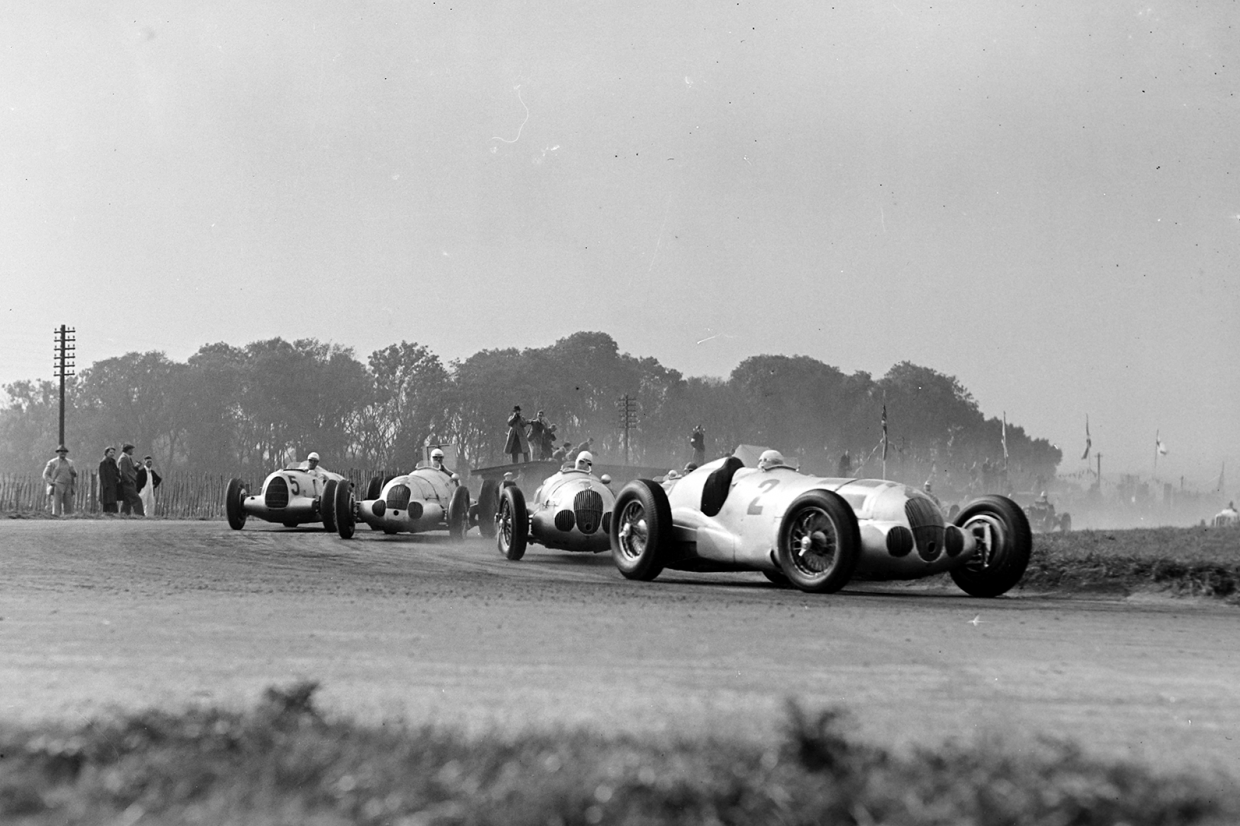 Some measure of his superiority over his Auto Union teammates can be gained from looking at the practice times from Donington Park – Hermann Müller and Rudolf Hasse were both four secs in arrears.

‘Playing the lone wolf is all very well,’ wrote George Monkhouse in his wonderful book Motor Racing with Mercedes-Benz, ‘but it must have been a terrific strain, and Rosemeyer has my greatest admiration for the game way in which he always drove…

‘The risks he took, sometimes bordering on the reckless, were unbelievable, with the Auto Union on the verge of leaving the road the whole time.’ 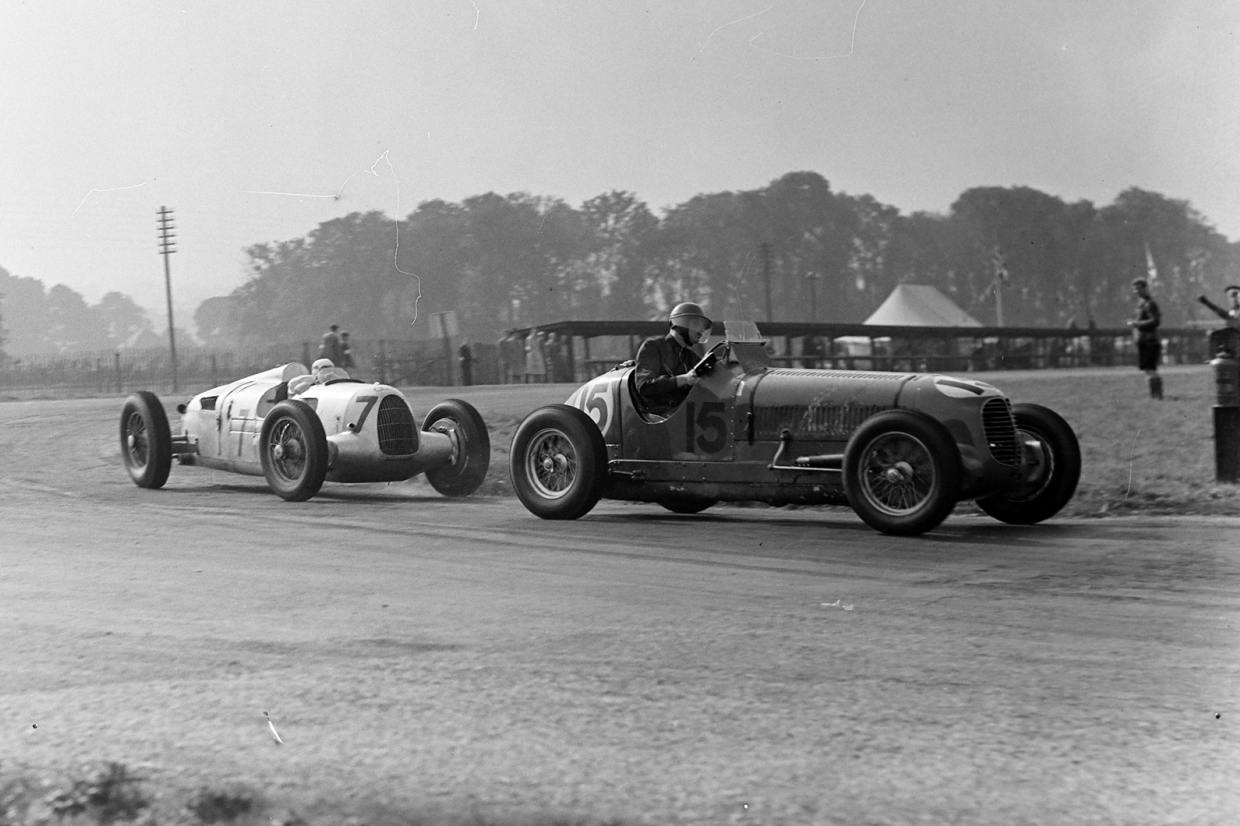 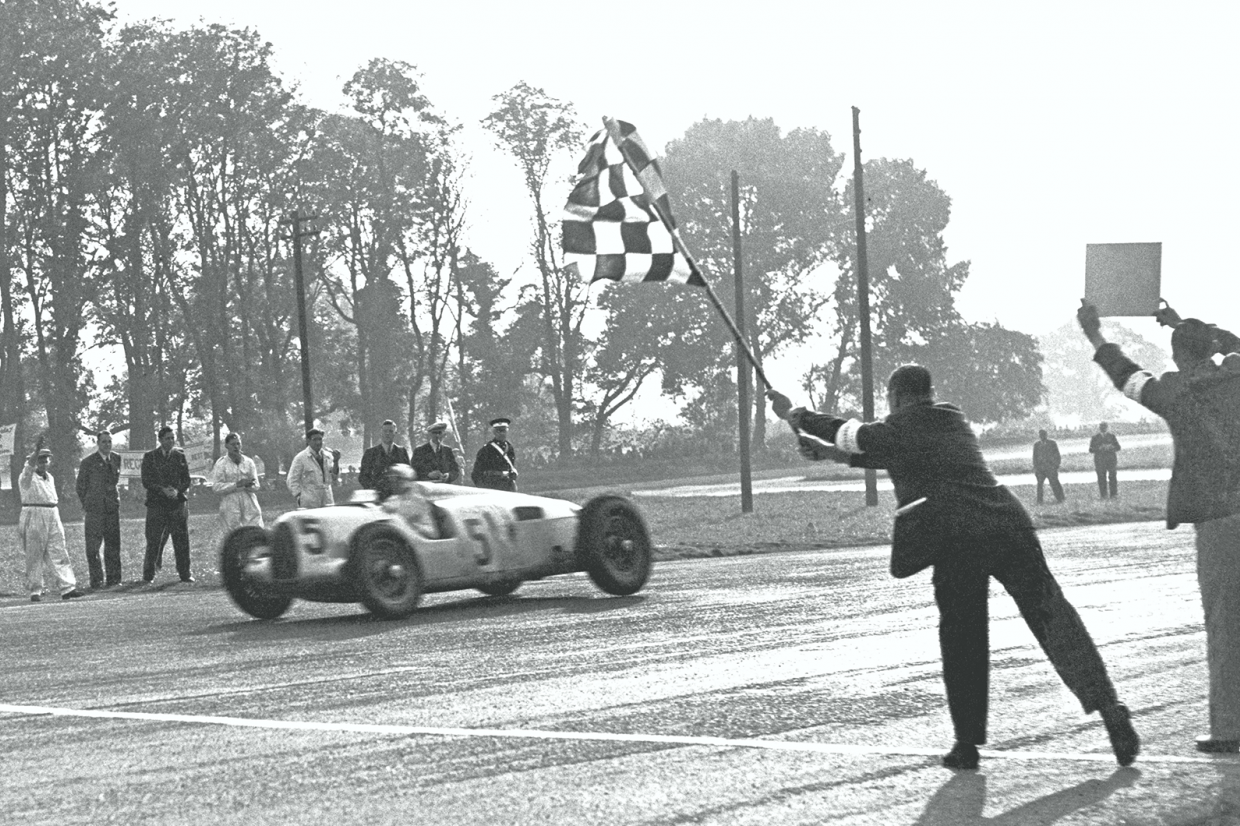 Then there were the record runs – a source of much prestige to both Mercedes and Auto Union, but perilously dangerous.

Incredibly, the autobahn was closed on only one side. On the other, separated by just a grass strip, normal traffic continued via a contraflow system. A barrier was put in place to mark the spot where drivers had to cross to the other side.

Luckily that barrier was manned, because on his first run Rosemeyer had forgotten all about it. Realising that he wasn’t going to be able to stop in time, the officials dragged the barrier out of the way and the Auto Union streaked past.

Now running against the flow of traffic, Rosemeyer calmly carried on to Darmstadt, which was the first place he could turn around, then headed back. 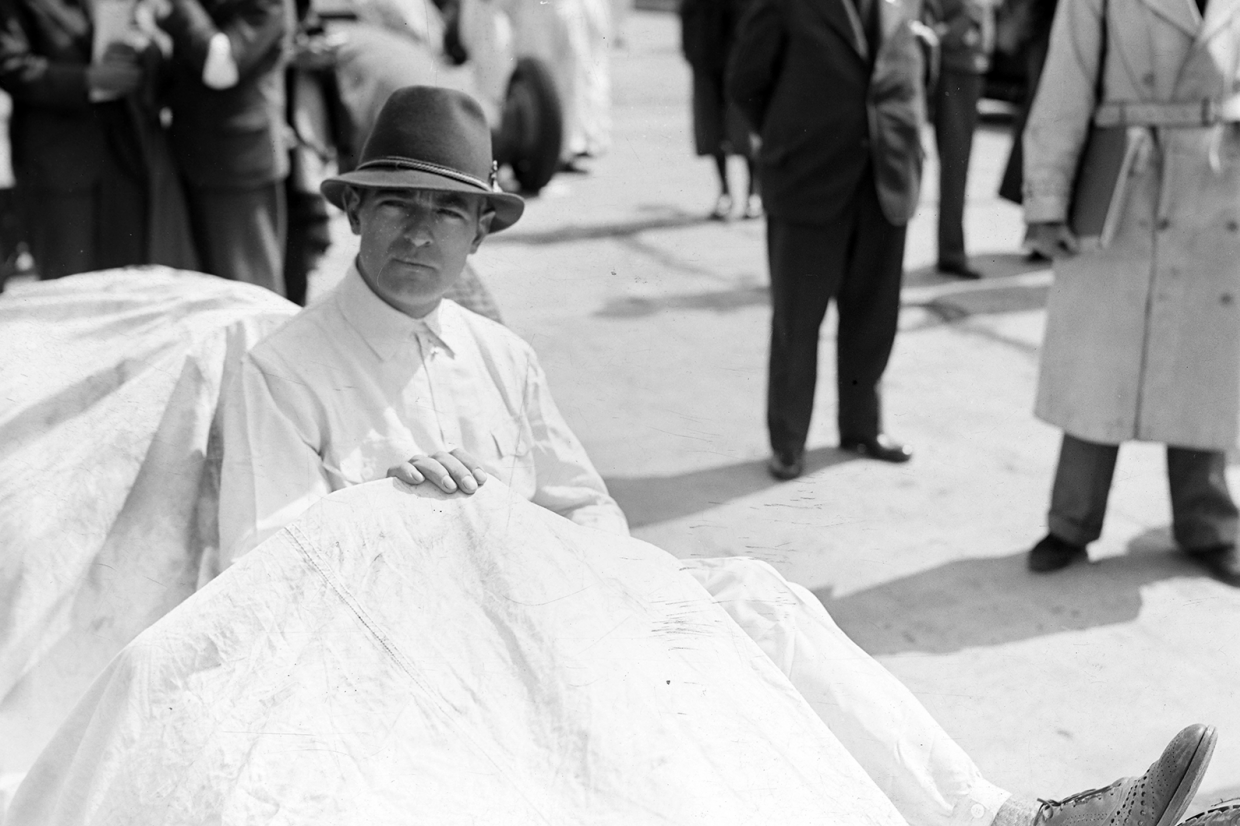 Rosemeyer sitting in his car, protected by a sheet, at the Nürburgring in 1937

In the car, both shared the same ‘never say die’ attitude, immense natural speed and an apparent fearlessness. Out of it, too, they seemed remarkably similar.

‘As an individual he was ever the same boyish, sunny-natured man,’ said Auto Union’s Dr Feuereissen of Rosemeyer.

‘He was entirely without guile and said exactly what he thought of all men, no matter whether it might profit or injure him.’

‘He had the most likeable and dynamic personality,’ concluded Monkhouse in his book, ‘and was exceedingly popular with the crowds, being young, good-looking, dashing and carefree… He was probably the fastest road-racing driver the world has ever seen.’