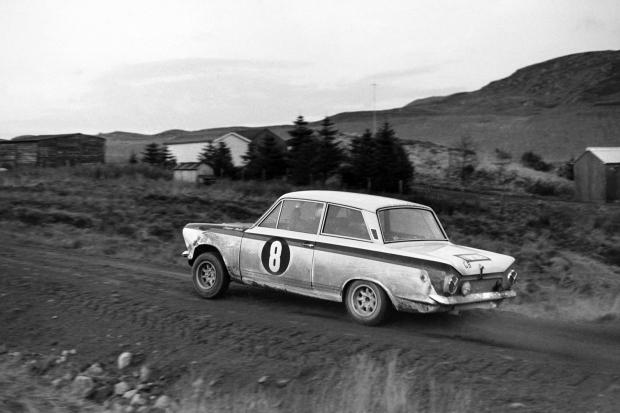 Even the Scandinavians were impressed.

If they’d thought that the presence of Jim Clark in a works Lotus Cortina on the 1966 RAC Rally was merely a publicity stunt, a bit of off-season fun for the Formula One superstar, they were swiftly put right.

The Super Swedes and Flying Finns had to concede that the quiet Scotsman was the real deal.

Clark’s willingness to drive anything – and his ability to drive it well – has often been documented over the years. 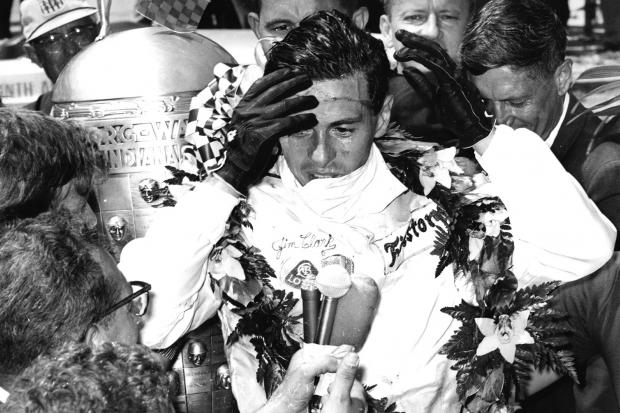 Clark's victory in the 1965 Indianapolis 500, in a Lotus-Ford, was further proof of his skill and versatility behind the wheel

He famously tried ‘Remus’ at the 1964 French Grand Prix meeting and, despite never having sat in the ERA before, was soon lapping faster than its owner, the Hon Patrick Lindsay. He even impressed in a Ford Fairlane during a one-off NASCAR outing at the 1967 Rockingham 500.

Then there was his appearance – as the Formula One World Champion – at the wheel of a twin-engined Mini Moke in a televised Autopoint in late 1963.

This off-road event pitted the London Motor Club against the British Army Motoring Association at a military training base near Aldershot. Clark, competing for the London MC, got bogged down in one of the heats before winning two others.

Most of those outings were simply for fun – Clark was never happier or more expressive than when he was behind the wheel.

But his appearance on the RAC Rally was different. He knew the Lotus Cortina well, of course – even if his experience of it had been on circuits rather than stages – and he went into it determined to show well against the Scandinavian stars.

There are folk who rank his performance as highly as anything he did in Formula One. 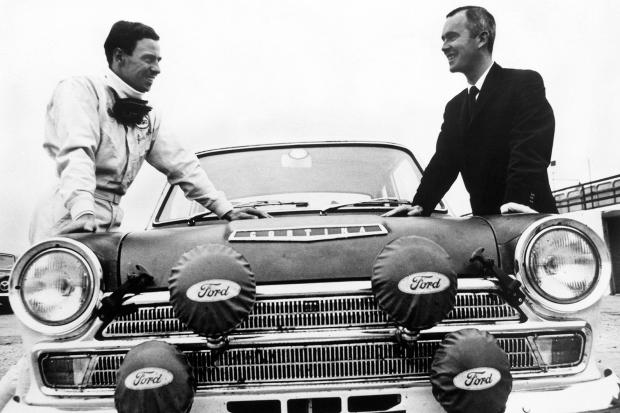 Clark and co-driver Brian Melia with their works Lotus Cortina

In those days, it was an event unrecognisable against today’s tightly packaged Rally GB. It covered 2400 miles, for a start, including 63 special stages across five days and three nights – there was only one overnight halt.

From a ceremonial start at Heathrow, the crews travelled south west, through Hampshire, Dorset and Devon before swinging up to Bristol and driving across the newly completed Severn Bridge.

They went up through Wales and back across the border to the Lake District. Then it was up into Scotland for a brief rest at Aviemore before heading south once more via Yorkshire and Silverstone.

Pathé News summed it up in a manner that was rather more 1950s than Swinging Sixties: “For the driver who thrives on the challenge of hard going, the RAC Rally is the very thing!”

Clark certainly took it seriously, testing extensively at Bagshot with his rallying namesake Roger, and having alongside him Brian Melia – a hugely experienced co-driver and a fine driver in his own right.

The two Clarks would be part of a stellar field. Pat and Eric Carlsson had a works Saab apiece, Pauli Toivonen was there for Renault, and Rootes entered four cars – the leading one of which come the finish would be the Hillman Imp of Rosemary Smith and Valerie Morley.

BMC, meanwhile, entered Minis for the star quartet of Tony Fall, Paddy Hopkirk, Timo Mäkinen and 1965 winner Rauno Aaltonen, and there was also a Cooper for the man who would become Clark’s Lotus team-mate in 1967 – Graham Hill, who would have alongside him Sunday Times correspondent Maxwell Boyd. 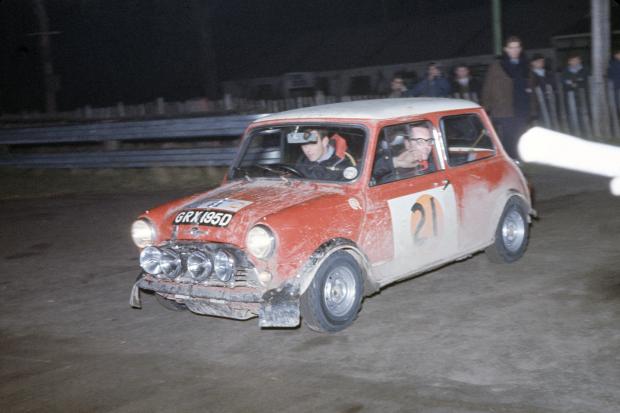 The Englishman was waved away from Heathrow by his family, with newly crowned World Champion Jack Brabham performing starter’s duties for the 146 entrants.

When the rally proper got under way with a three-miler at Bramshill, Clark was immediately on the pace. He was fifth fastest on that first stage – ahead of both Aaltonen and Mäkinen – and fifth again on stage two.

On the fourth stage at Puddletown in Dorset, he was third quickest, behind only Mäkinen and Toivonen. When Roger was forced to retire after going off the road on that same test, all eyes turned to the other Clark.

At the end of the first day, Jim was keen to play down his performance, saying that Melia should have been driving because he’d have been far quicker.

But he did say that he was “getting used to it” and, tongue firmly in cheek, took a friendly pot-shot at Graham Hill: “He’s playing at it. What does he mean coming on the RAC Rally in a works Mini Cooper and bringing a bloody journalist?!”

As it turned out, Hill didn’t get any further than the Lake District on day two, his Mini retiring at Grizedale with a broken gearbox and a cracked sump.

Clark maintained his impressive pace. At the halfway stage, Mäkinen had a comfortable lead over Bengt Söderström, but the Scotsman was still comfortably within the top 10.

As he crossed into his homeland, however, things started to unravel. His first setback came when he went off on a downhill corner on the Loch Achray stage, damaging the front suspension and seriously rearranging the offside bodywork.

The service crew repaired everything as best they could in Aberfoyle before Clark set off once again.

Jackie Stewart was among the spectators who watched him come through the next stage – Loch Ard – with the driver’s door barely hanging on. 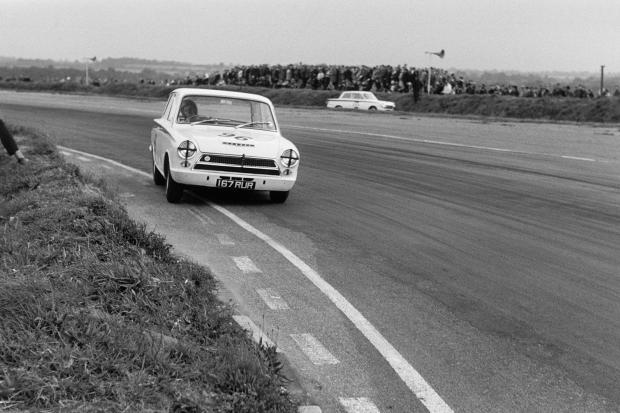 Five stages after his first ‘off’, Clark did it again, and this time in style, rolling the Lotus Cortina at Glengap. There was no way of recovering. The car was buried in the undergrowth and Clark’s rally was over.

The crew in one of the following cars – a Mini Cooper – saw Clark and Melia sitting on a bank by the side of the road and, in those days long before mobile phones and instant communication, recognised an opportunity to break the major news of Clark’s retirement.

The driver therefore stopped at a phonebox in a village on the next road section and called the BBC, which immediately broadcast the news on the radio.

The late Nigel Raeburn was the co-driver in the Mini Cooper. The man who actually provided the scoop will be familiar to those of you who’ve read Classic & Sports Car for long enough. Even now, he still provides the auction results that appear in the magazine each month – his name is Richard Hudson-Evans.

“Apart from breaking the news to the Beeb,” recalls Hudson-Evans, “I can also claim to have been overtaken in a sonic cloud of dust and rocks by the great man several times on several preceding stages – almost certainly more than any other competitor. Although I did have the satisfaction of regularly repassing them again on the road sections, giving a celebratory blast on my air horns as the Boreham service crews carried out running repairs to the increasingly battered Lotus Cortina.”

Another brilliant footnote to the story is that Hudson-Evans’ service crew comprised Will Sparrow and Russell Brookes – both future works rally drivers. 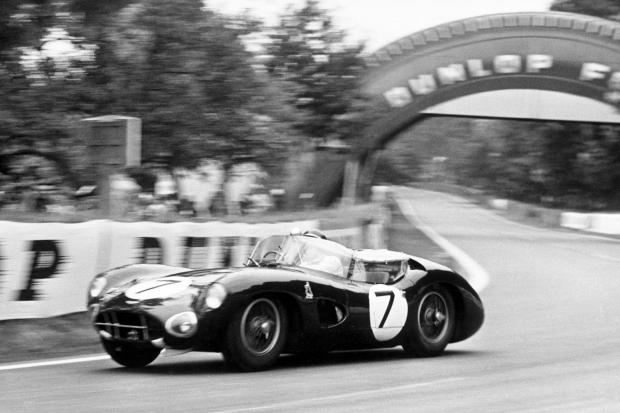 Clark also achieved a podium finish at the Le Mans 24 Hours in 1960, with Roy Salvadori in an Aston Martin DBR1

When he was finally forced to call it a day, Clark had recorded three stage wins and was in the top four on a further 16.

By any measure, it was a remarkable performance in this most specialised of disciplines – but what really endeared him to the team was what he did next.

Rather than disappearing at the first opportunity, he borrowed another Lotus Cortina and followed the service crew for the rest of the rally, helping out where he could.

When it was all over and Söderström had taken a hard-earned victory – Mäkinen had retired with gearbox problems – Clark then treated everyone to dinner at a hotel near Heathrow.

Less than 18 months later, he was gone, killed in a Formula Two race at Hockenheim. Even in an era that contained the likes of Stewart, Hill, Brabham, Jochen Rindt, John Surtees, Chris Amon and Dan Gurney, he was the acknowledged benchmark, with a rare talent that could be expressed in the Welsh forests just as well as it could at Spa or the Nürburgring.

Don't miss our Jim Clark special, 50 years after his untimely death, in the July 2018 issue of C&SC