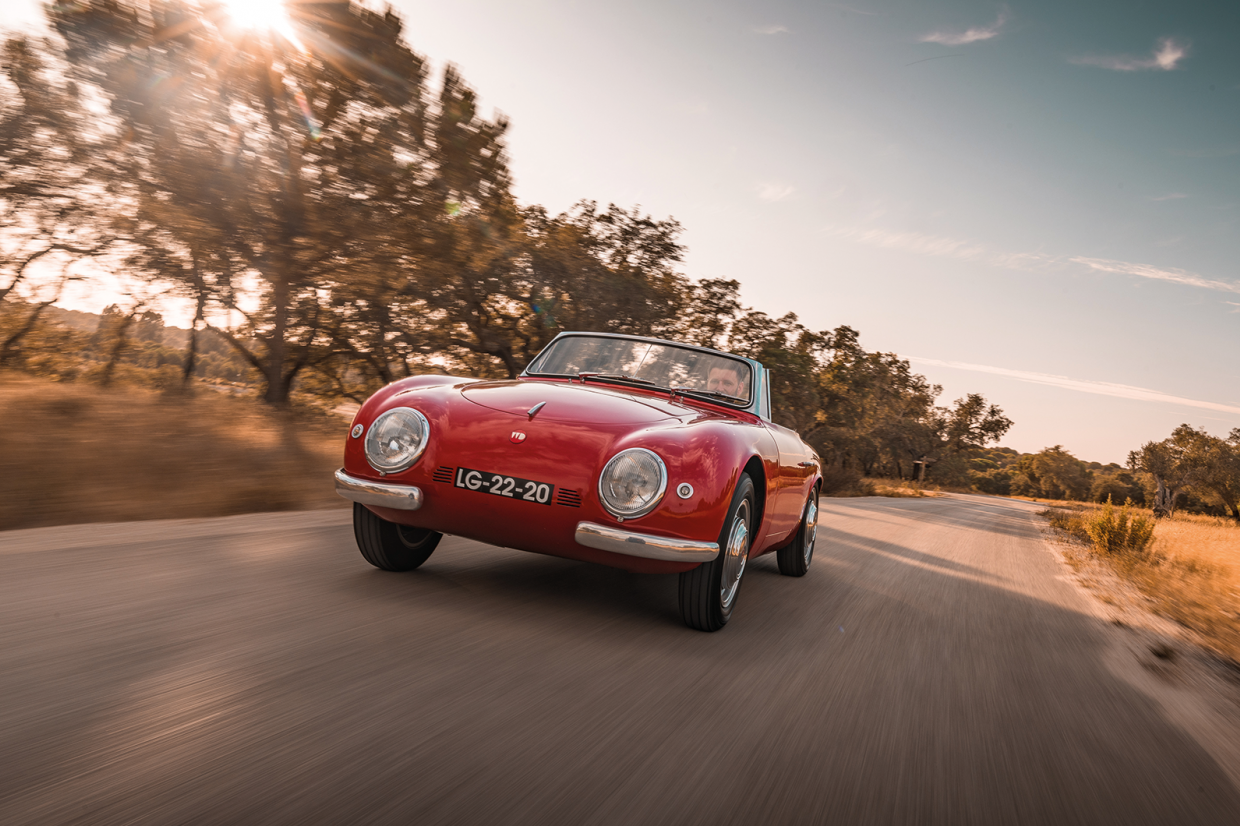 Few marques are so intimately tied with the history and image of Southern California as Porsche.

Just the mention of the name conjures images of Aviator shades and cigarette packs tucked into T-shirt sleeves; a Kodachrome world of sun-drenched race tracks, James Dean and blue jeans.

But, while history remembers the Speedster as a cult icon, an exotic and overlooked Teutonic racer was giving the 356 a run for its money throughout the ’50s, from Santa Barbara and Pomona to the street circuits of Europe.

As Ferry Porsche was beginning construction of his 356 in a scruffy sawmill in Gmünd, an Austrian rival by the name of Wolfgang Denzel was embarking on an automotive journey of his own in Vienna. 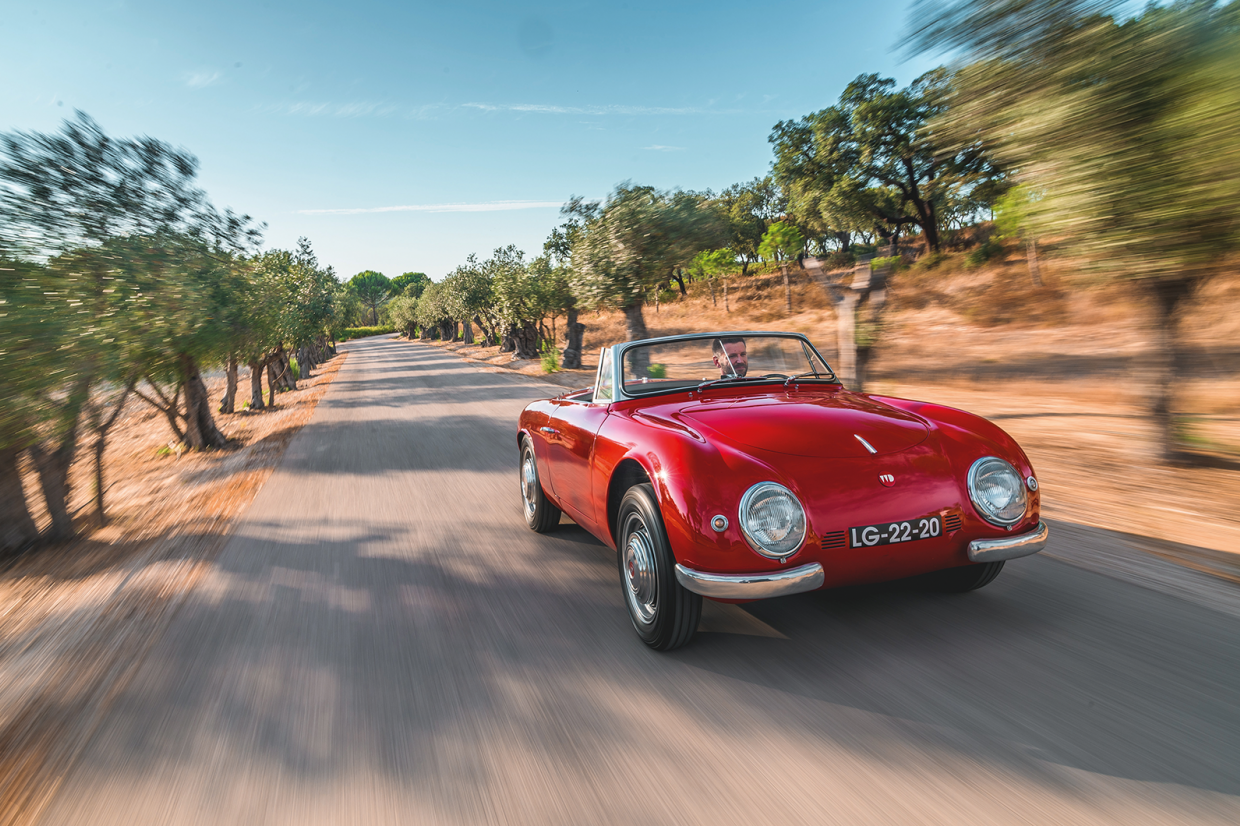 Denzel was a gifted engineer who, like Porsche, saw great potential in the Volkswagen Beetle, and the military Kübelwagen variants that flooded the post-WW2 market.

Denzel began work on a prototype, using the chassis, 1100cc flat-four engine and underpinnings of the People’s Car, but with a lightweight body of his own design constructed from laminated wood and textiles.

Denzel’s creation came face-to-face with its rival at the 1949 Austrian Alpine Rally, which ran for 800 miles along the Katschberg, across the Pötschen Pass and through the mountains surrounding the Porsche factory. 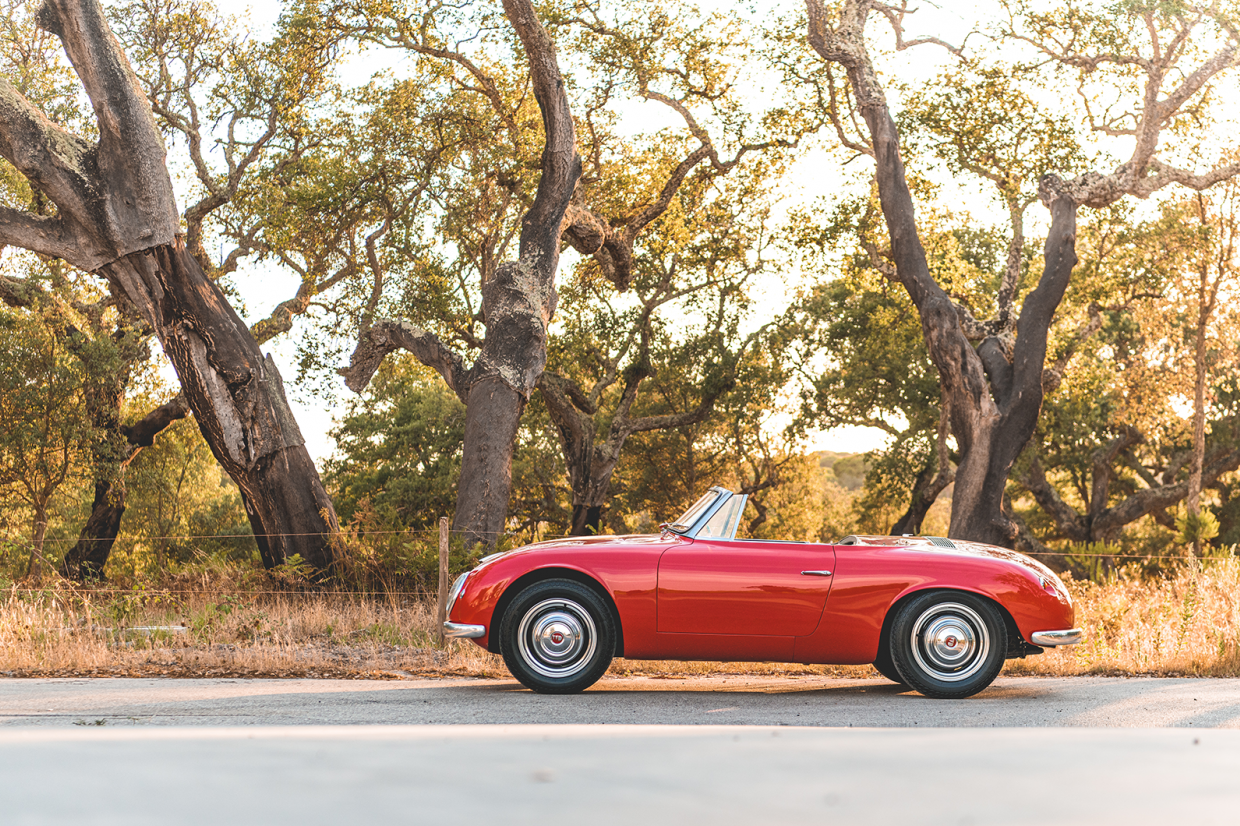 The sole surviving Type 64 – forefather of the 356 – took to the mountains with its owner, the eccentric one-armed privateer Otto Mathé, while Denzel competed in his then-dubbed Volkswagen WD Equipment.

The futuristic Porsche streamliner retired from the rally, but Denzel posted a clean sheet and finished top of the 1100cc class.

As well as category honours, the lightweight roadster offered a glimpse of its future potential with impressive pace during the timed stages. 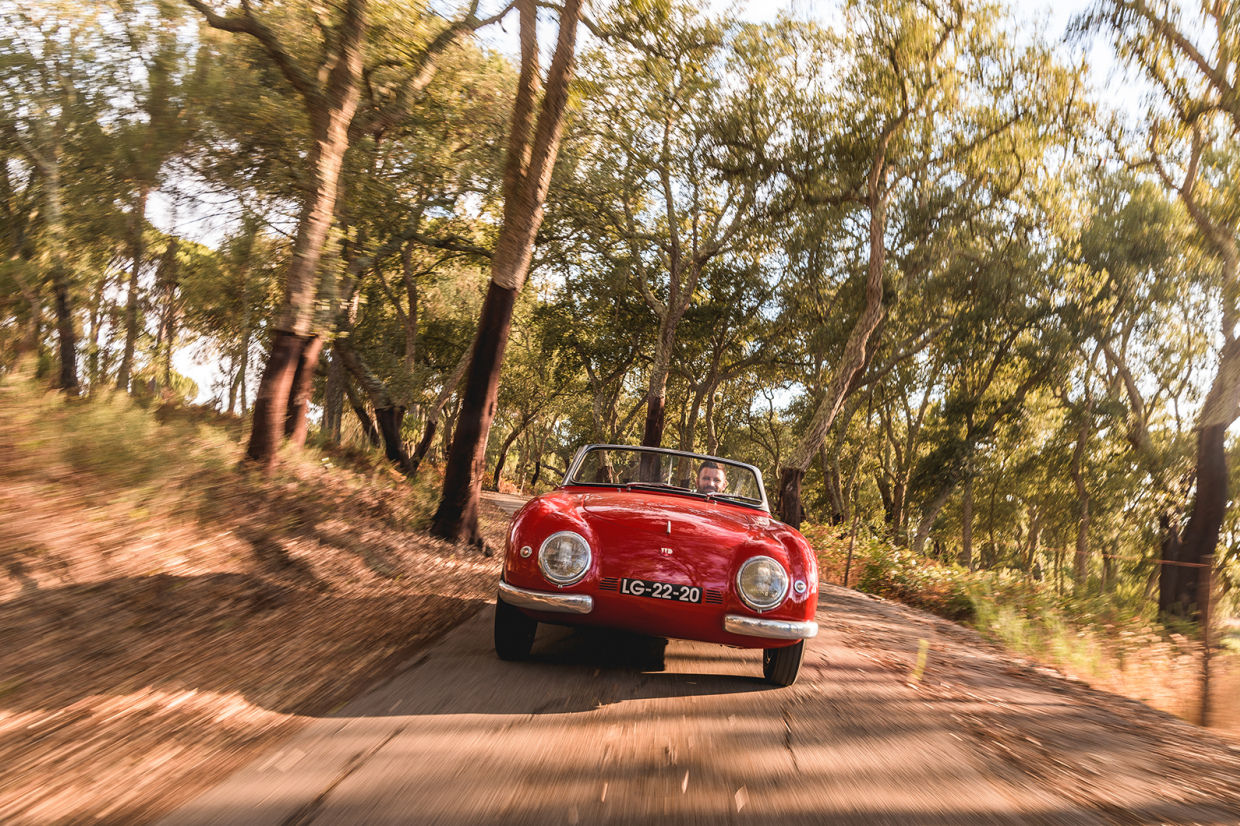 Production of road cars followed, with early examples built on Beetle chassis, bodied first in plastic and then, by 1950, in steel, and in 1952 the brand-new 1300 Sport joined the line-up.

Now clothed in aluminium and sitting on a bespoke box-section chassis due to difficulty in procuring parts from Volkswagen, it was more powerful than its predecessors and tipped the scales at around 650kg.

While the engine’s internals also relied on Volkswagen mechanicals, they were significantly uprated.

Denzel developed a counterbalanced crankshaft and even experimented with aluminium conrods, with pistons and cylinders made by Mahle, plus his own cylinder heads (identifiable by their aggressive plug angle and additional fins for cooling) with bespoke rocker arms and pushrods, all the while retaining the simple VW Beetle crankcase.

Scintillating performance was the result, and by the middle of the decade Denzel had managed to double the Beetle’s modest 36bhp power output.

Road & Track hailed the car as ‘a little jewel to the real enthusiast who wants to have a reasonable chance of success in 1300cc sports-car racing’, concluding that it ‘is extremely easy to drive and control, in competition or on the city streets’. 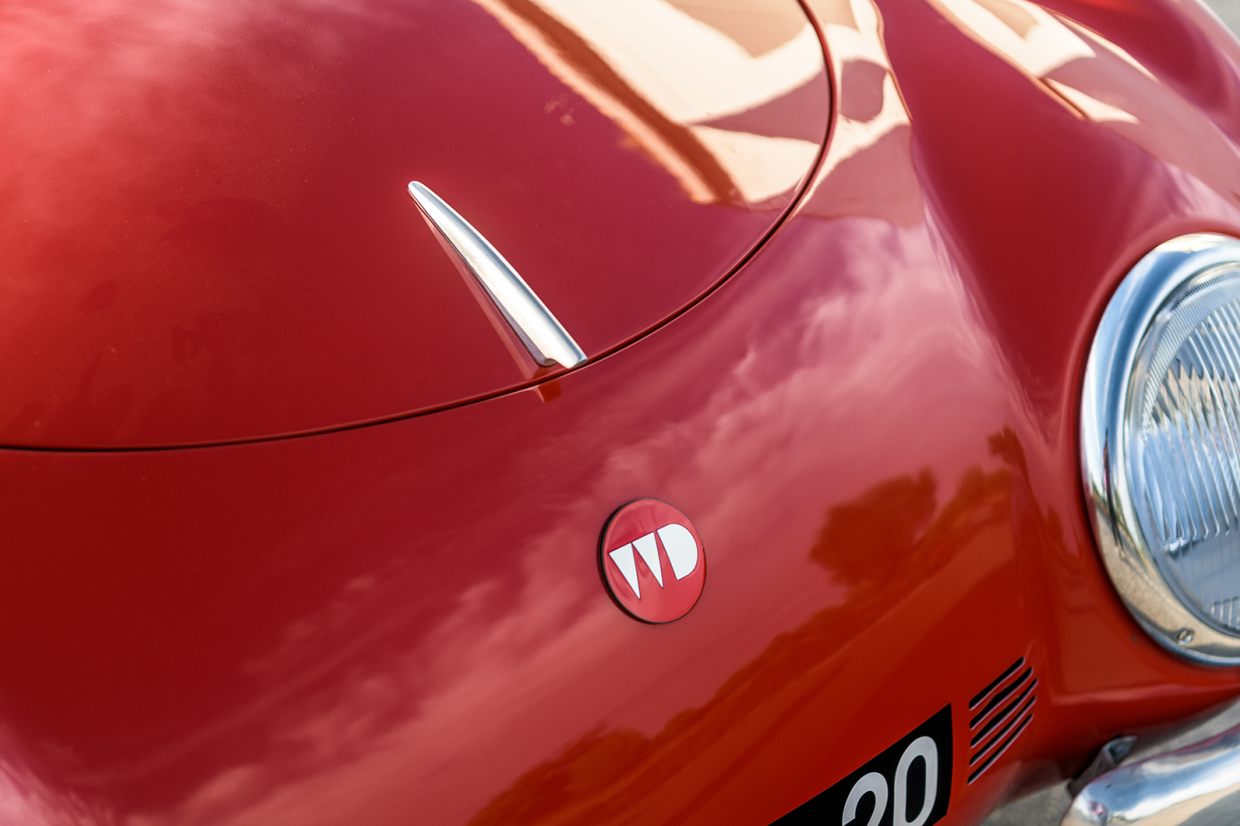 The lineage of the Denzel is clear to see, the attractive roadster screaming ‘Beetle’ from its slanted, recessed headlamps, with a curved, aerodynamic bonnet that bears more than a passing resemblance to the 356.

Look closer and you’ll see a wide-rimmed three-spoke steering wheel and stubby mushroom-shaped gearlever – also borrowed from the VW parts bin – while the deep sills of the box-section chassis will seem familiar to anyone who’s spent any time in a Bug.

The fuel tank, battery and spare wheel are all mounted in the front compartment, with the air-cooled boxer engine slung out back behind the rear axle to give 44:56 weight distribution.

With few creature comforts, there isn’t much room for luggage – but the Denzel was a machine focused on competition rather than touring. 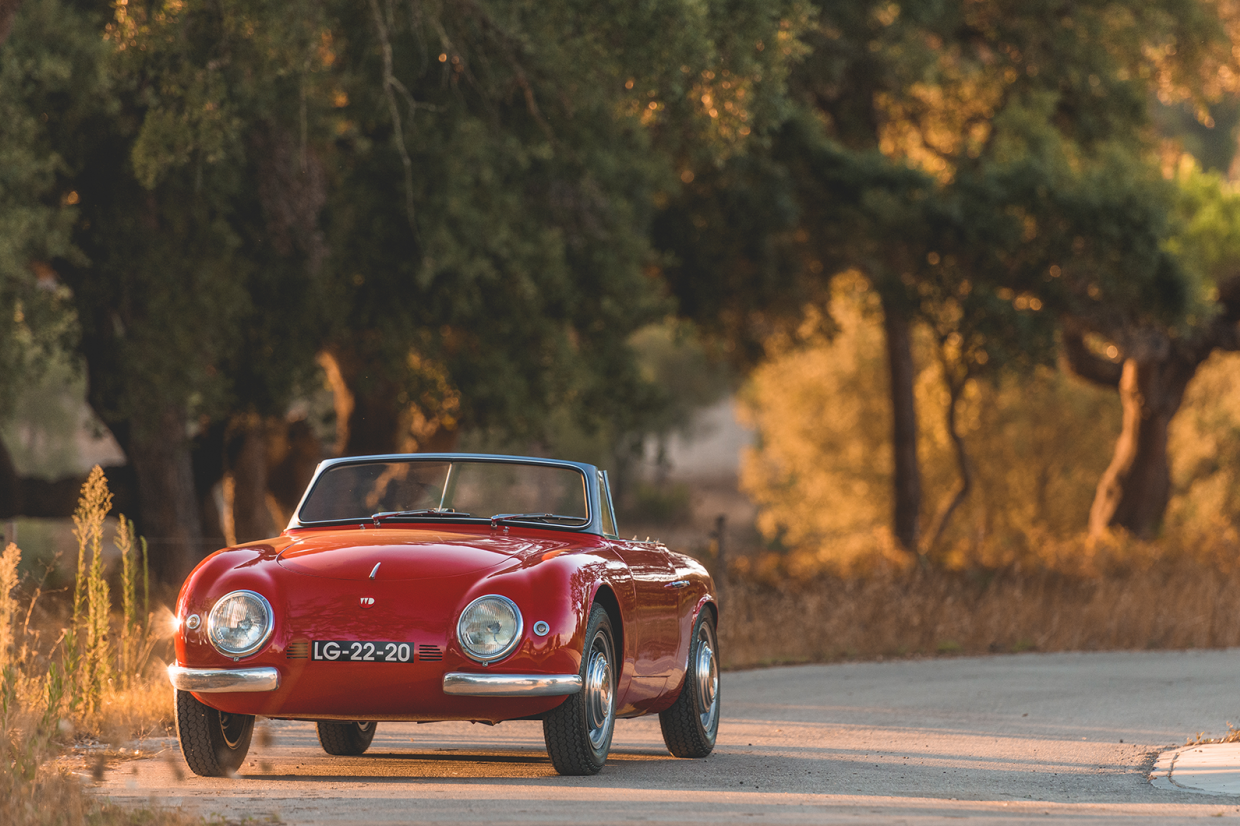 That chance encounter led to Herédia becoming the sole Portuguese importer of Denzels, with the first 1300 Sport arriving in the country in 1953.

DK32 followed a year later, fitted with a larger 1500cc engine, and was pressed into service almost immediately.

It’s easy to imagine the Portuguese’s enthusiasm for his new business, and he surely wanted to demonstrate the Denzel’s capabilities to drive interest in the car.

A number of races and rallies followed, including a class win and second overall in the Rallye a São Pedro de Moel in August 1956. 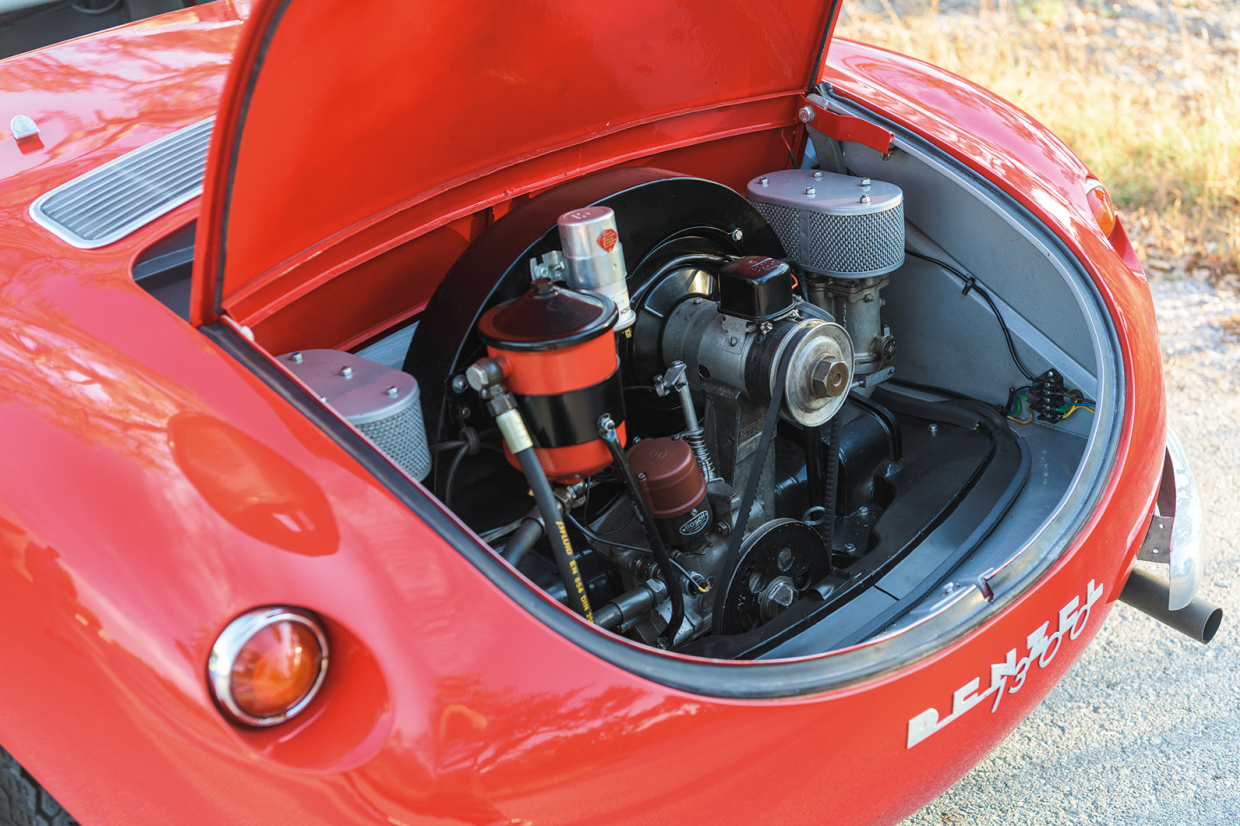 Development of the model continued as the decade wore on, and Herédia’s close relationship with Denzel allowed him to return his car to Vienna for a number of upgrades in 1959.

The now-rare 1500cc engine was replaced with a 1300 Super Sport unit, while the chassis was rebodied in line with an updated design introduced in 1957.

Similar in style to the original body, it was narrower, with flared arches front and rear and attractive, weight-saving split bumpers.

Rather than the conventional three-man bench seat, the narrow body necessitated lighter individual seats comprising little more than a frame and fabric. 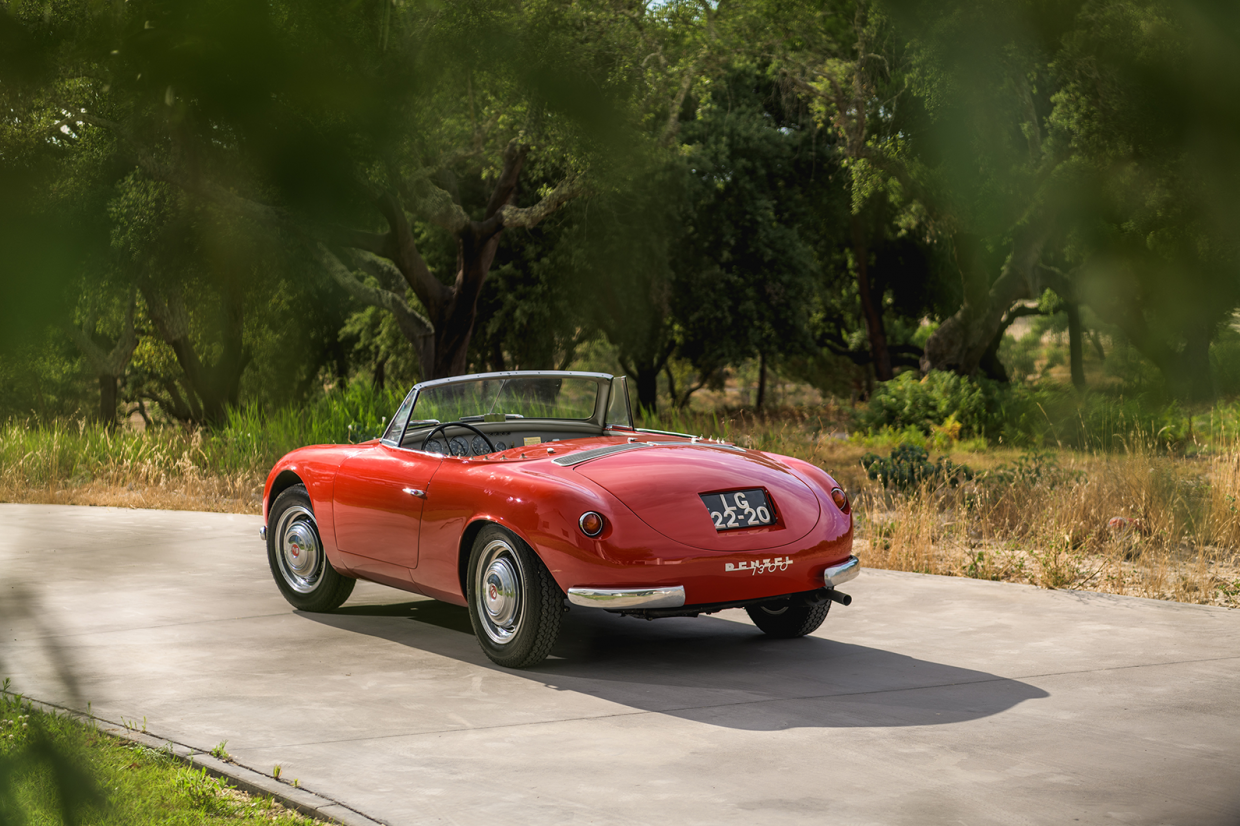 In its original form, tearing around Monsanto in 1955, DK32 bore a more striking resemblance to its 356 rival, its wheels lost in the cavernous arches of its bodyshell.

The addition of the narrower, racier body in 1959 gave it a more purposeful stance that better suits its short wheelbase.

It’s a remarkably small car and pretty from any angle, with a rounded boat-tail and minimal overhang complementing its Porsche-like front end.

That big wheel doesn’t help when climbing aboard, but once you slip yourself beneath it you find seats that are simple yet comfortable, with a driving position that offers a commanding view of all four corners. 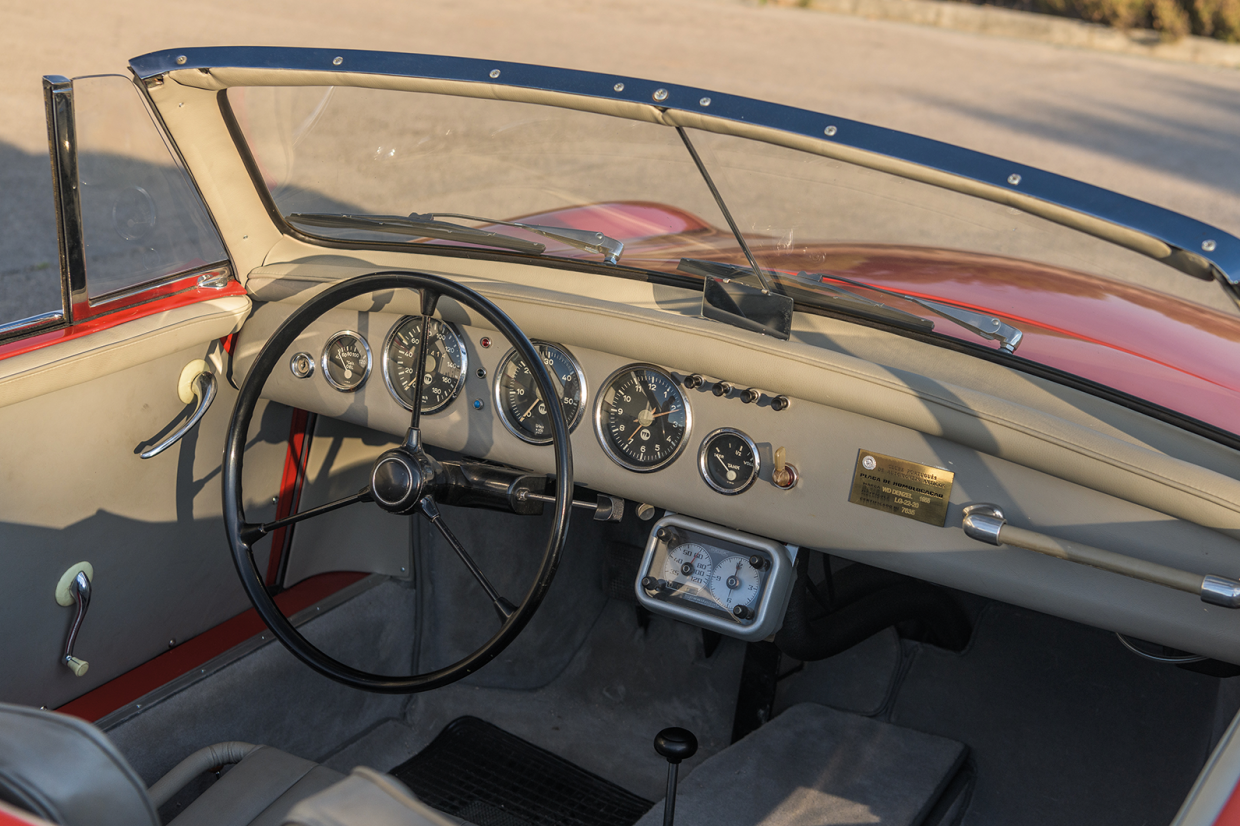 The stunning João Teves Costa restoration included a retrim in grey leather of both seats and the simple dashboard, but that’s where the comfort ends – the rest of the cabin is spartan and utilitarian, with a grabhandle for the passenger and a small, low-mounted rear-view mirror.

Sitting beneath the dash is a Halda Speedpilot rally timer, a nod to the car’s competition heritage.

Everything is dainty, from the delicate exterior doorhandles to the window winders.

The pedals follow suit, being light and easy in operation, though the organ-type accelerator seems something halfway between MDF and cardboard.

It almost makes the Denzel feel like a mail-order kit, the sort of thing you might buy as plans and construct in your garage.

Elsewhere, the attention to detail is impressive: the bonnet hinges are an elaborate trestle of aluminium, each drilled for lightness, while the WD logo adorns both the speedometer and rev counter. 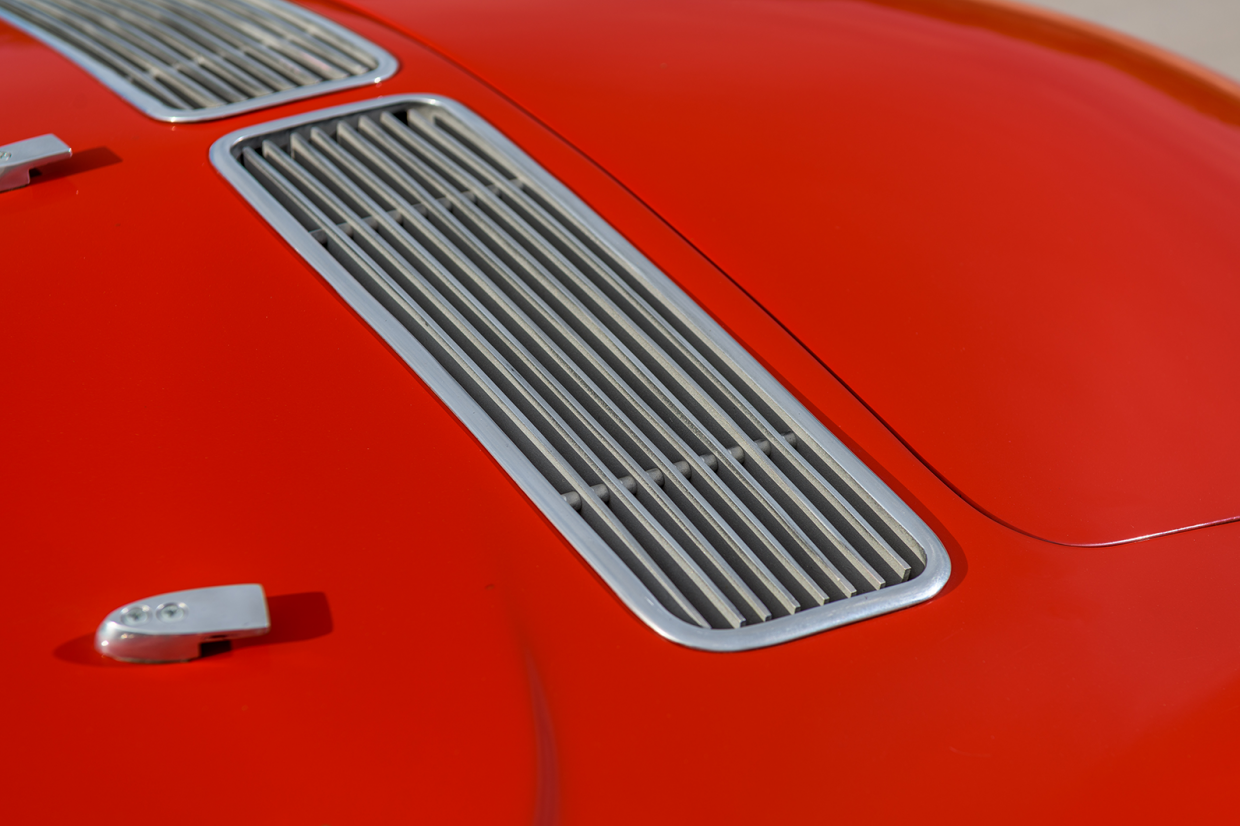 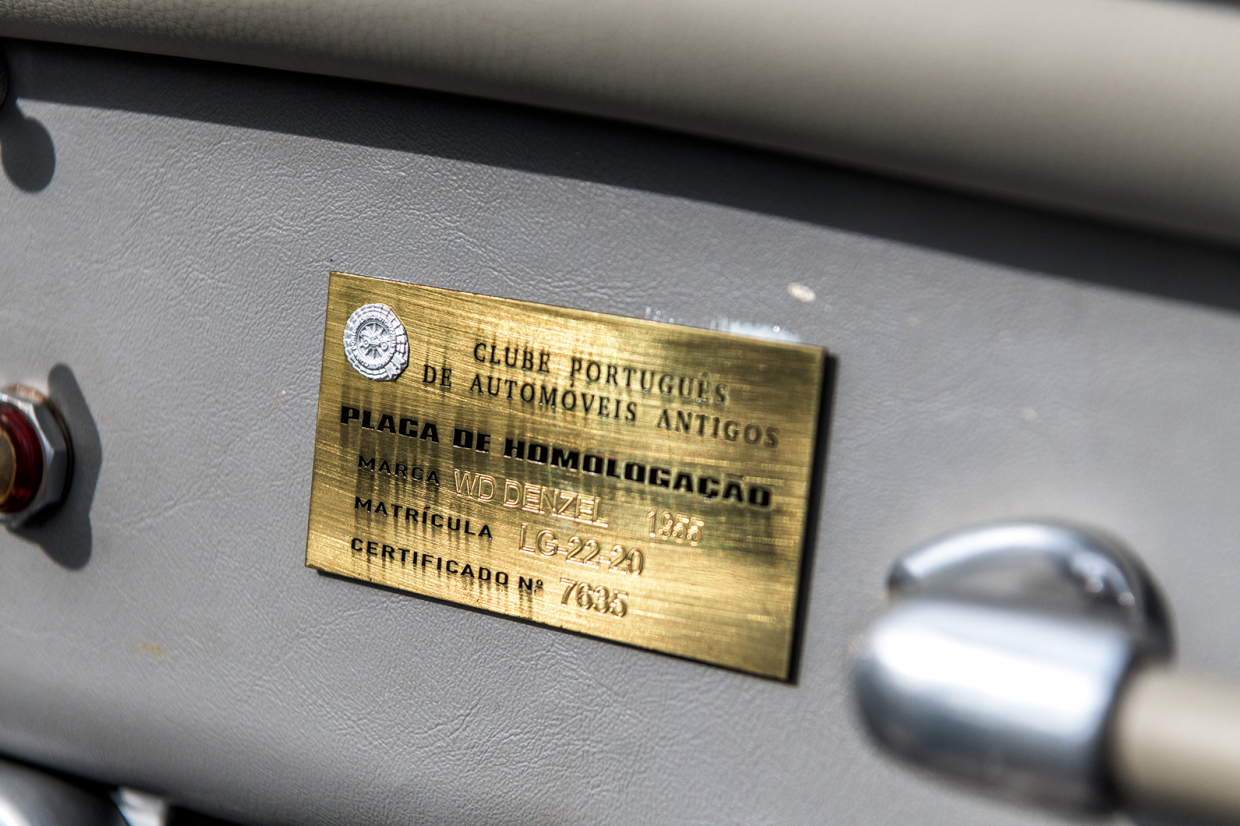 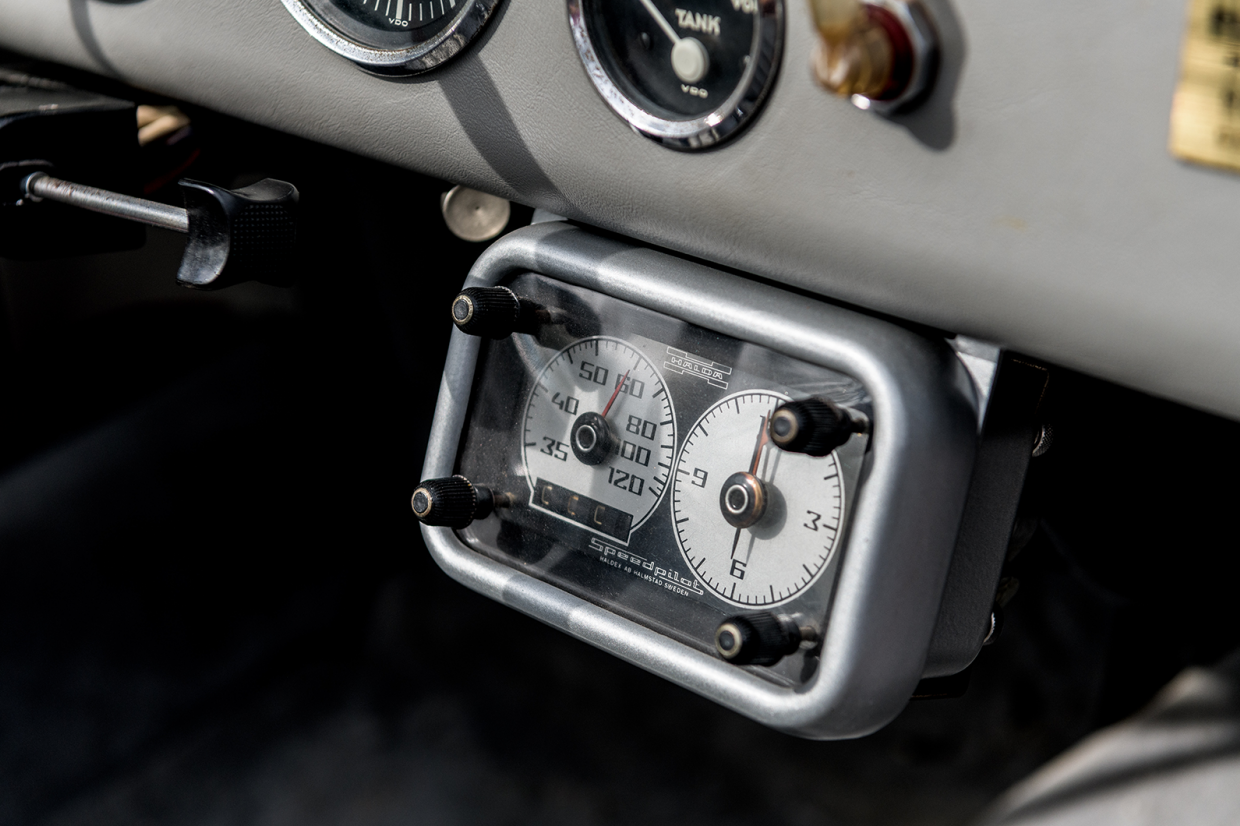 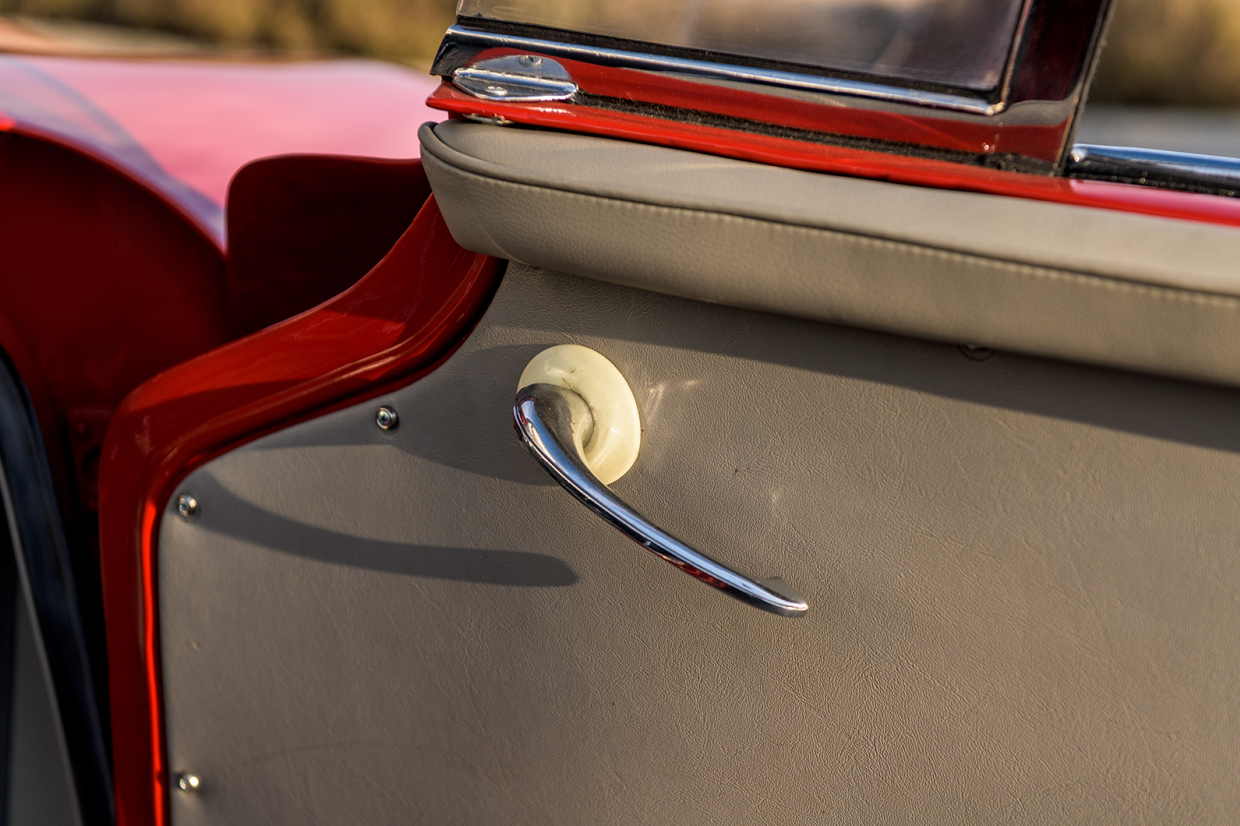 After a couple of pumps to prime the twin downdraught Solex carburettors, the little Denzel fires at the second crank, filling the air with the unmistakable sound of Volkswagen’s flat-four song, tinged with a baritone body that hints at its performance credentials.

You have to keep on the accelerator while the engine is still cold, but once warm it settles to a more relaxed, gruff idle.

Looking around the dry, sandy landscape, you could almost be outside Willow Springs in 1955.

Instead, we’re about an hour south of Lisbon, long after the busyness and bustle of the city has given way to rolling hills dotted with cork trees, whose dark leaves contrast with the yellow ochre of the parched terrain. 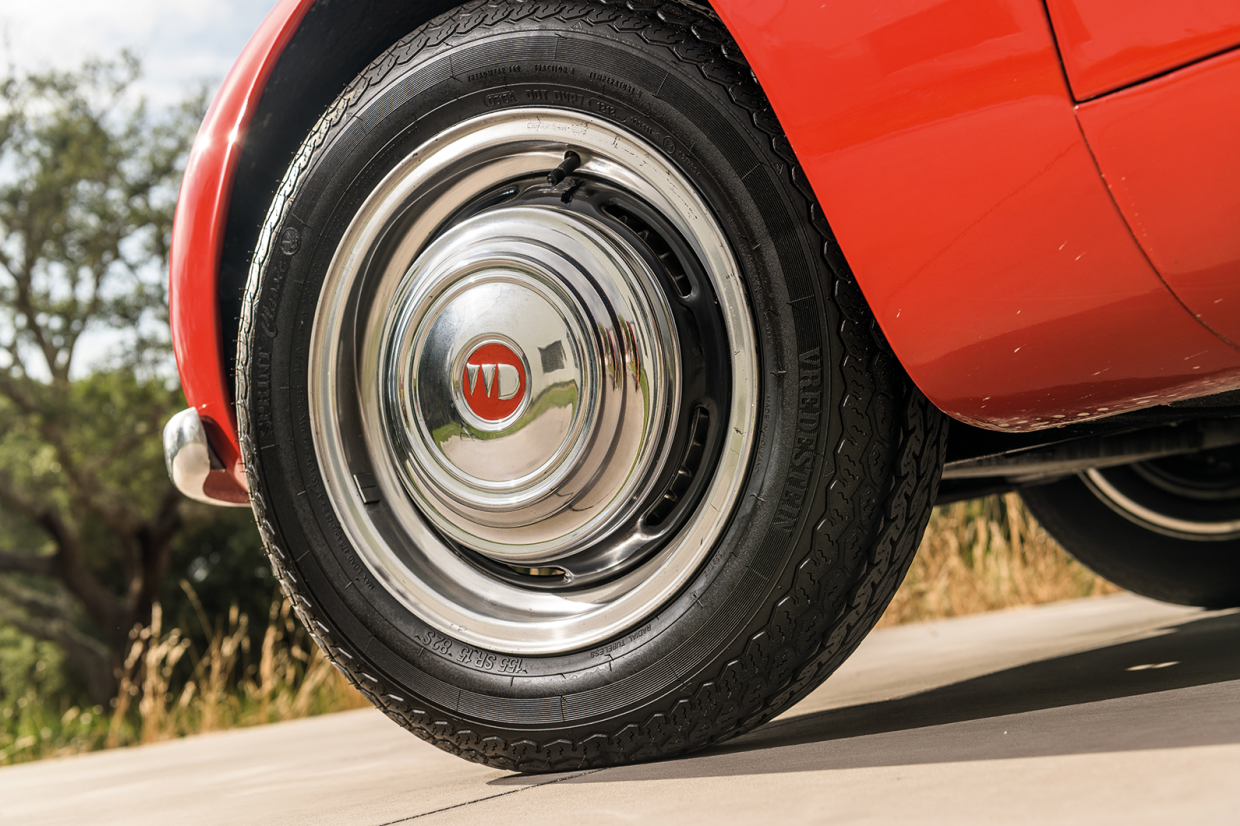 We’ve got the run of the ranch, which, though not enormous, features a network of narrow, winding roads laced over the undulating countryside.

There’s no traffic, so it’s a great chance to see what the racer can do.

The gearchange is unsurprisingly Beetle-like, though much less vague. Whether by design or as a result of the recent restoration isn’t clear, but the action is tight and positive with a very short throw.

Everything is light in the Denzel including the clutch and, despite the car’s racing pedigree, setting off smoothly is a breeze.

As the revs rise, the air-cooled thrum becomes a roar; little more than a thin engine cover separates you from the gurgle of the twin carbs, while every bump and rut in the road is transmitted directly through the floor. 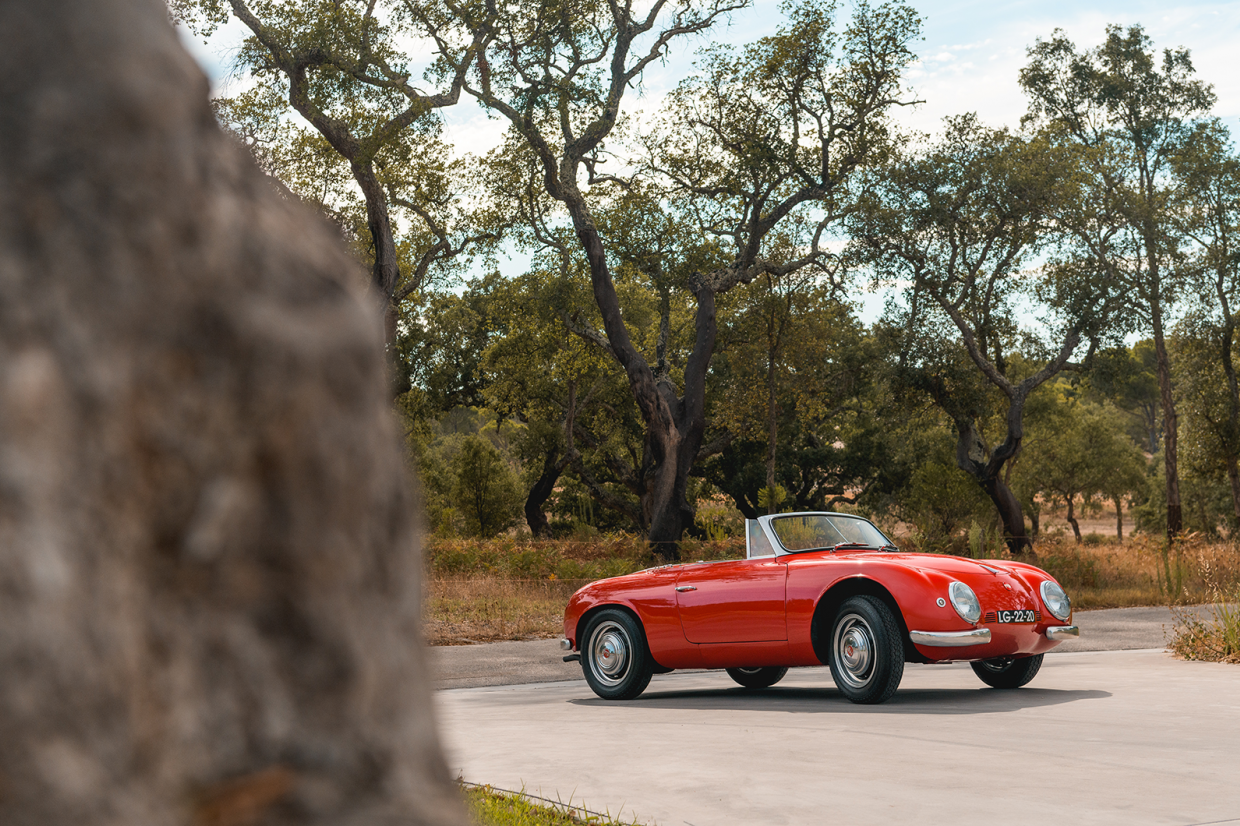 Combined, there’s a sense of occasion that few cars can match.

With such little weight over the nose it’s unsurprising that the steering is feather-light, aided by narrow 5J wheels and the large steering wheel.

More surprising is the level of feel the Denzel delivers, with almost Alpine A110 directness and just 2.6 turns lock-to-lock; despite being very aware of both the car’s biscuit-tin construction and the rows of olive trees lining each side of the road, it gives you the confidence to press hard into corners.

Beautifully balanced, with an understandable lean towards oversteer, the 1300 seems much more than the sum of its parts.

And while RM Sotheby’s headline-grabbing upper estimate of €450,000 holds us back from really testing its limits (it sold for €314,375 on 21 September 2019), there’s a feeling that the Denzel won’t quickly get you into trouble.

Brisk acceleration, a fantastic soundtrack and lively performance are the hallmarks of the Denzel, and the longer you spend behind the wheel the more capable it becomes. 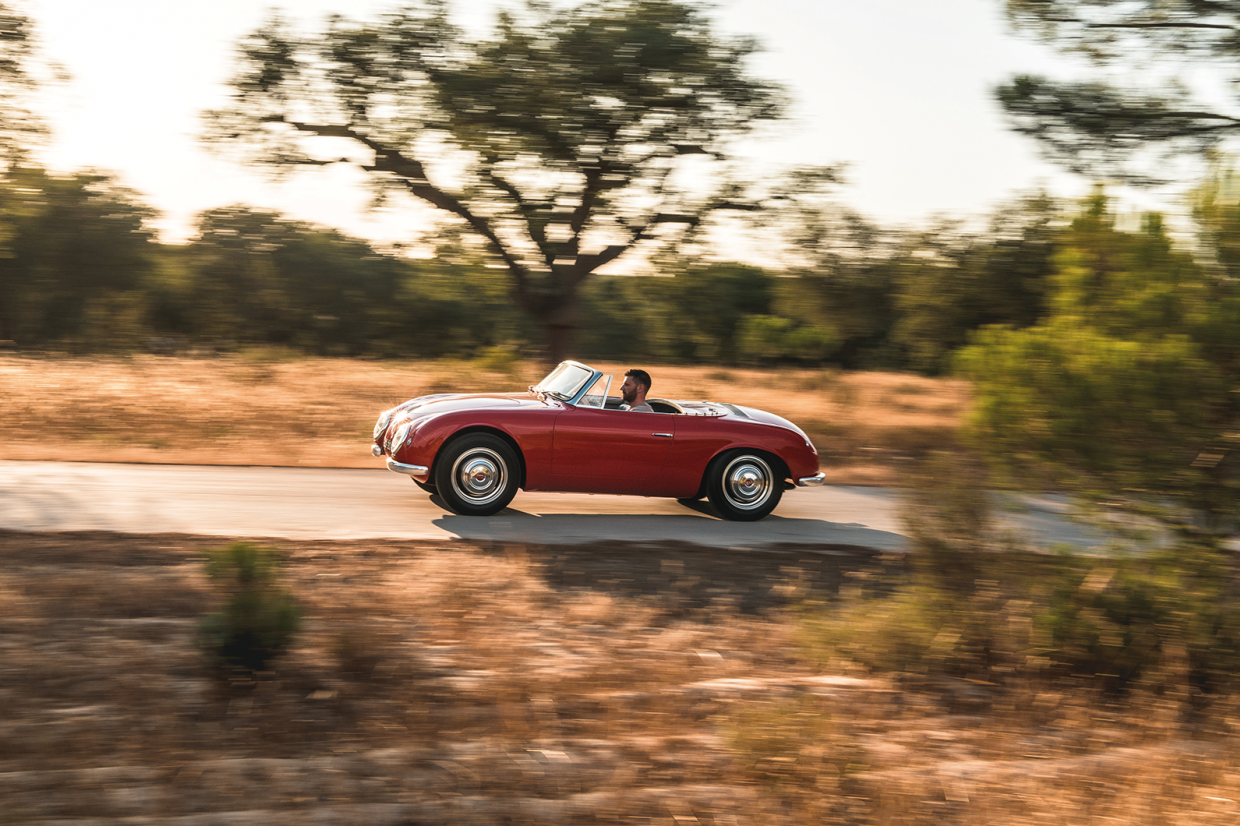 Driving into the low sun on a balmy summer’s evening, it’s easy to imagine what it must have been like to campaign the roadster in period, and clear to see why the short, lithe sports car proved so effective on tight street circuits and rallies.

Given its competition success, impressive performance and adorable looks, it’s perhaps surprising that you don’t see more in historic motorsport – until you consider just how few left the Vienna workshop.

Precisely how many Denzels were built is a mystery lost to time, with estimates ranging from as many as 350 to just 65.

The latter is more probable given the number of survivors, which is estimated to be around 35, roughly divided between Europe and America. That makes this a true rarity compared with the 356 Speedster, produced in its thousands. 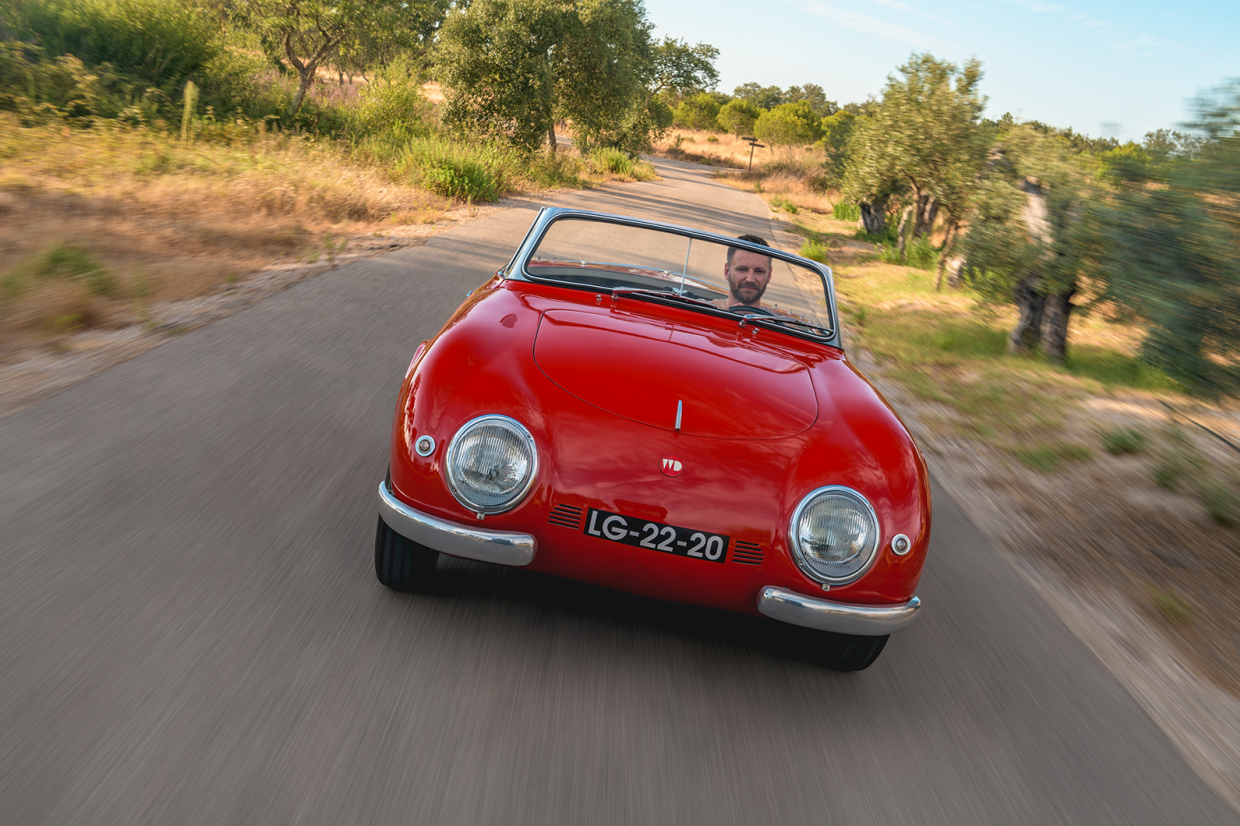 Denzel never achieved the success and global recognition of its Austrian competitor, but it would be wrong to write off the firm as an also-ran.

The cars stood up to scrutiny, proving time and time again that they were capable of taking on and beating the best the competition had to offer.

So convincing was the project that it readily gained backers such as Herédia, supporters who didn’t just place single orders but who had the confidence to become importers. 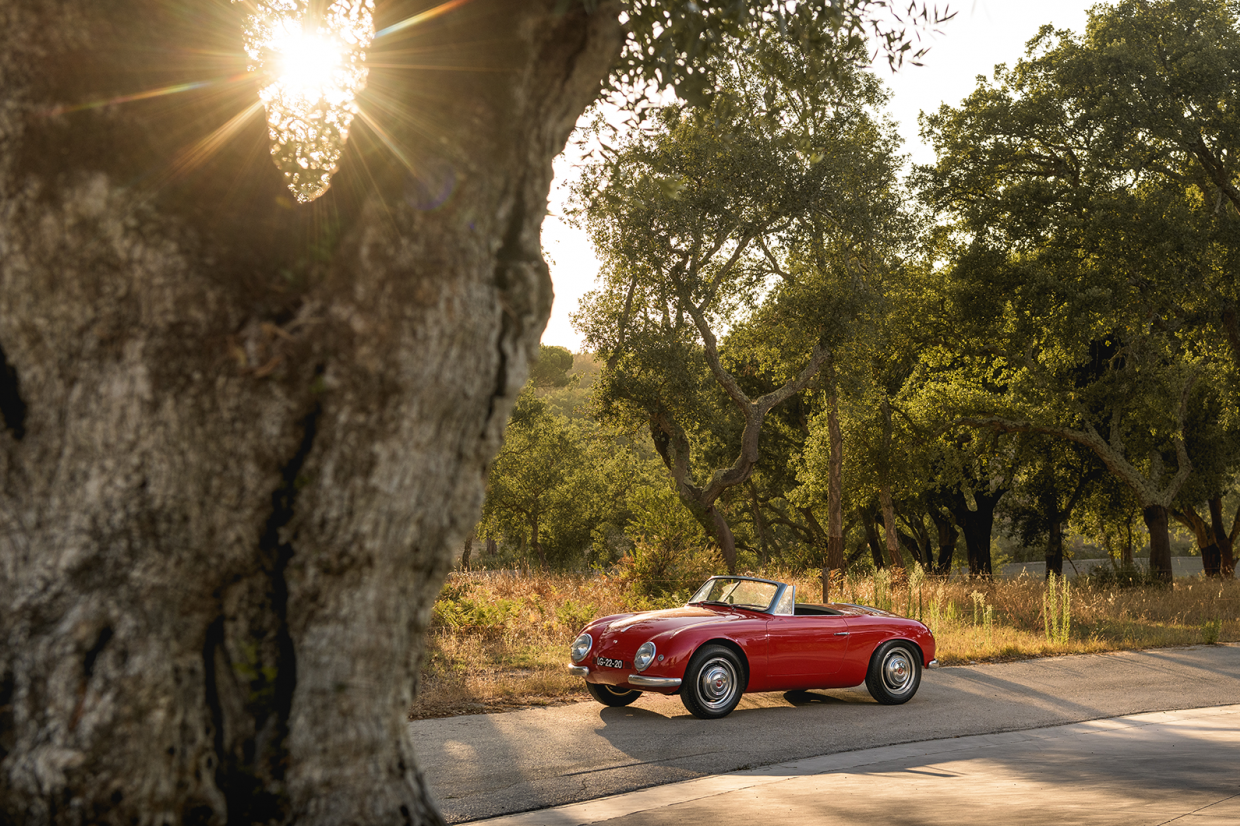 Ultimately, the project stalled. In part due to the limitations of the Beetle engine having long been reached, but perhaps more importantly as a result of Wolfgang Denzel’s divided attention.

By 1952 he had become the official Austrian importer for BMW, and his close ties with the German firm would lead him to design and produce the BMW 700 – a model that saved one marque to the detriment of his own.

Thanks to RM Sotheby’s 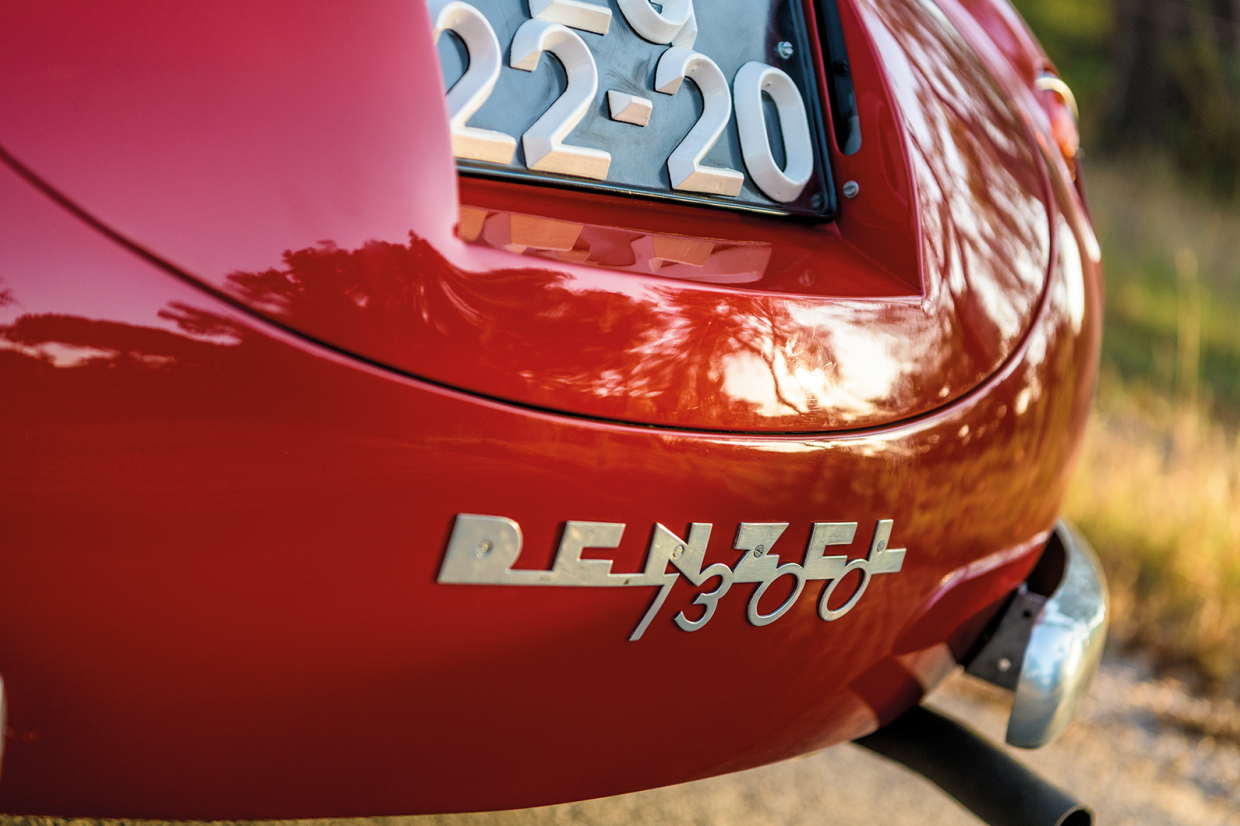 Why the Volkswagen Kübelwagen deserves its classic status

Why this charming Moretti 2300S leaves us wanting more