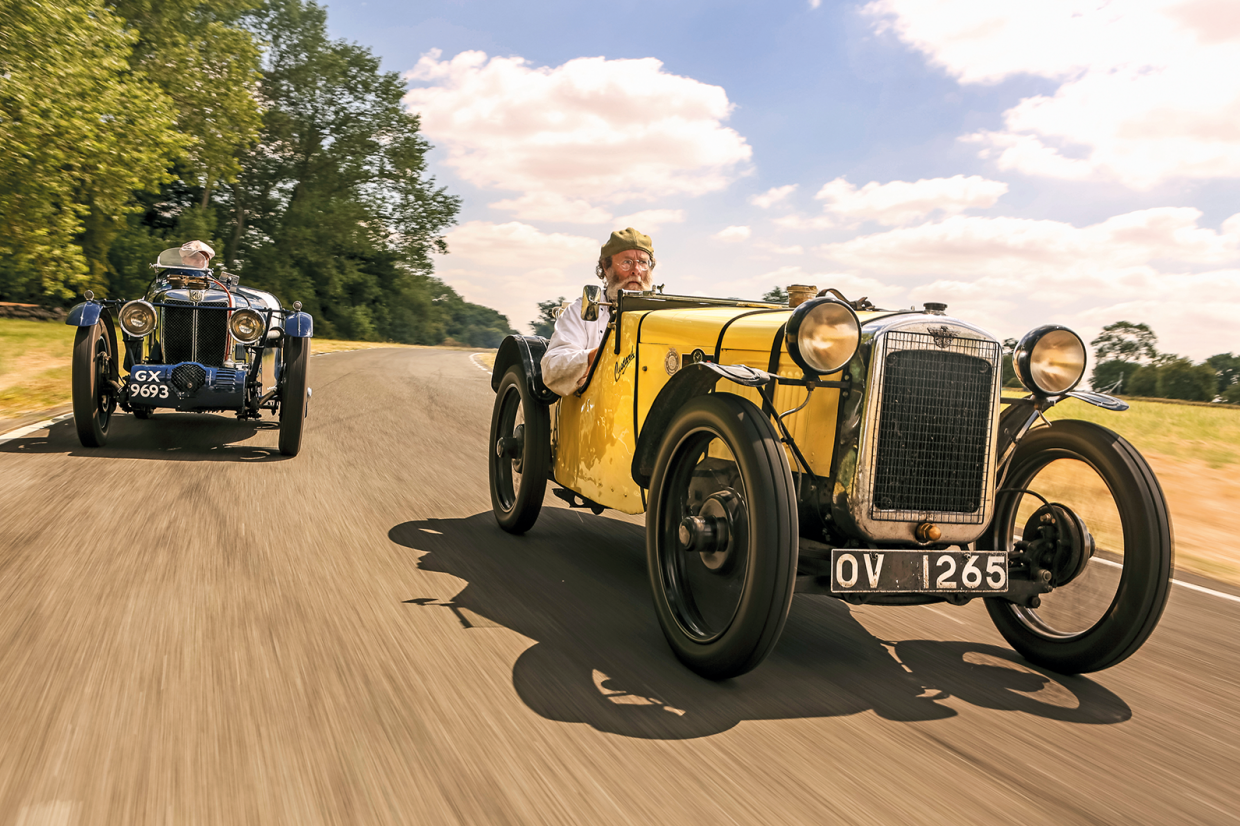 You might expect that a rivalry ignited in the 1930s would have perhaps calmed down by now.

Yet, despite the passing of decades – along with the people who originally built and raced these cars – it’s clear that the age-old quarrel between Austin Seven and MG Midget owners is one that still holds plenty of breath in its lungs.

Just as the Seven fathered sporting derivatives, such as the supercharged £225 Ulster, the Minor notably sired the 1929 MG M-type Midget.

A three-car team of M-types entered the Junior Car Club’s Double Twelve Hour Race at Brooklands in 1930 – the very year that had resulted in a busy time for the Ulster’s trophy cabinet. When the chequered flag fell at the filthily wet Surrey circuit, only two of the eight teams that started were still running – Austin and MG. 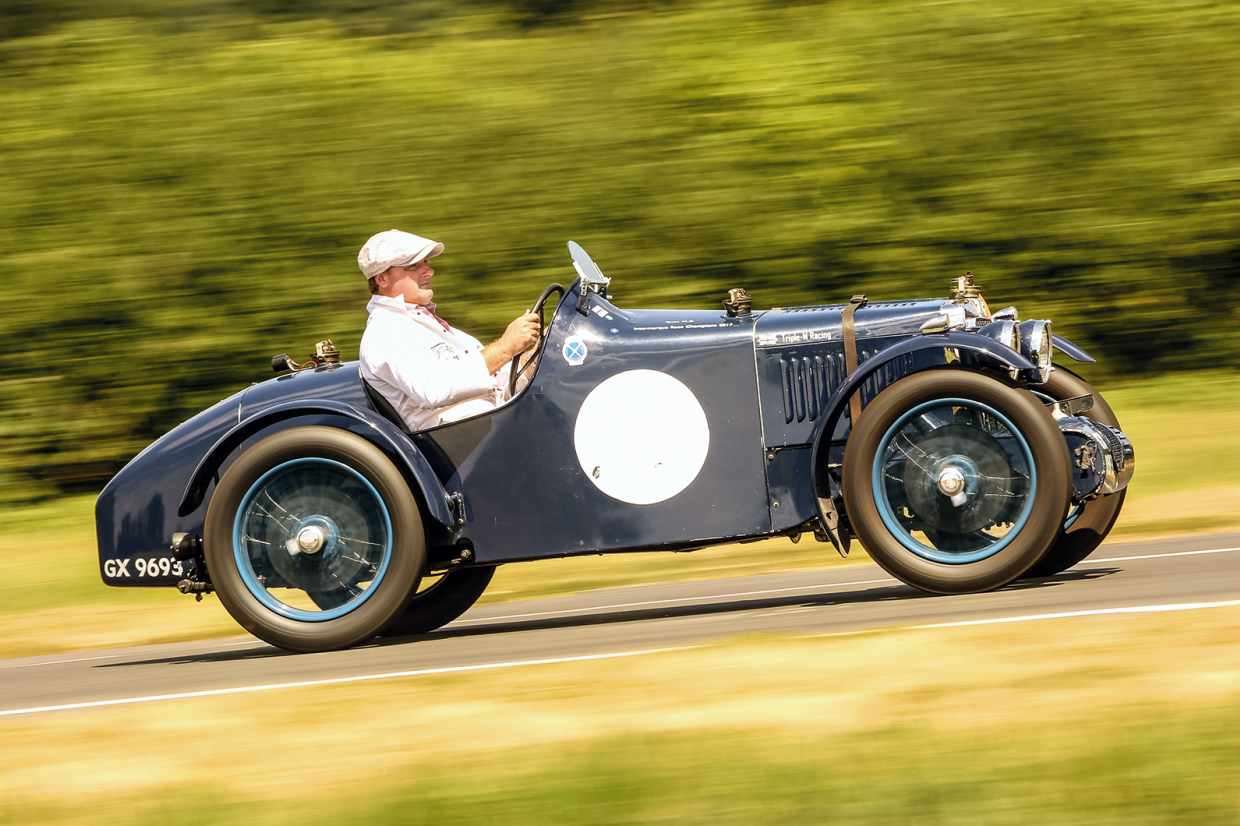 Ultimately, Randall and Edmondson’s Abingdon equipe would pip the supercharged Sevens – driven by the likes of Herbert Austin’s son-in-law, Arthur Waite, and the Earl of March – to the coveted Team Prize.

However, the Ulsters claimed first and second in class, and won The Autocar Trophy for performance based on price.

As if to underline the nascent rivalry, the race report in Motor Sport was sandwiched between a pair of boastful manufacturer adverts.

This was merely the start of the rivalry, because apart from Austin and MG, other marques scarcely got a look-in when it came to 1930s Class H (sub-750cc) racing and record-breaking.

As speeds were ratcheted up and competition intensified, the big prize was soon identified as being the first to crack 100mph – a feat scarcely imaginable when most ‘baby’ cars could just about reach 50mph. 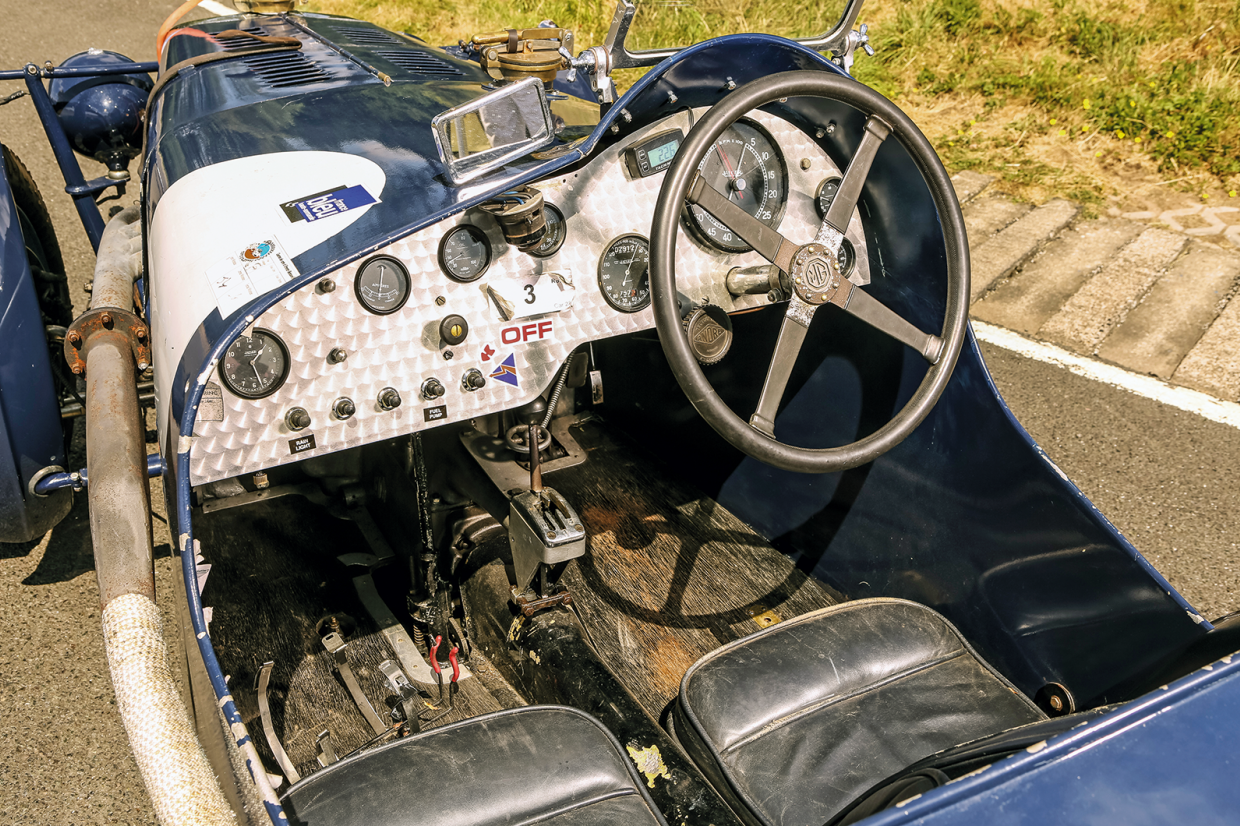 Waite, who established Austin’s racing department, had been determined to take a Seven to 100mph since 1925 – when some supercharged versions were capable of exceeding 90mph – but the magic ton had so far eluded the model.

The French had come closest at Montlhéry in 1928, when a Grazide clocked 96.57mph for the five-mile and 96.22mph for the 10-mile records, before the money ran out.

However, with a new supercharged monoposto Ulster, Waite saw the potential to not just set a record, but also to write a new chapter in motoring history.

Although Austin insisted that a production-based Seven with a sidevalve engine would do its record-breaking, the same attitude was not taken by MG.

The M-type’s overhead-cam 847cc unit placed it at the uncompetitive end of Class G (750-1100cc). Abingdon, though, was developing a new racing Midget that shared little with the M-type save its suspension track; this became the £575, 88mph C-type or ‘Montlhéry Midget’.

The prototype, EX120, would be used by George Eyston and Ernest Eldridge in MG’s quest to beat the Seven to 100mph. 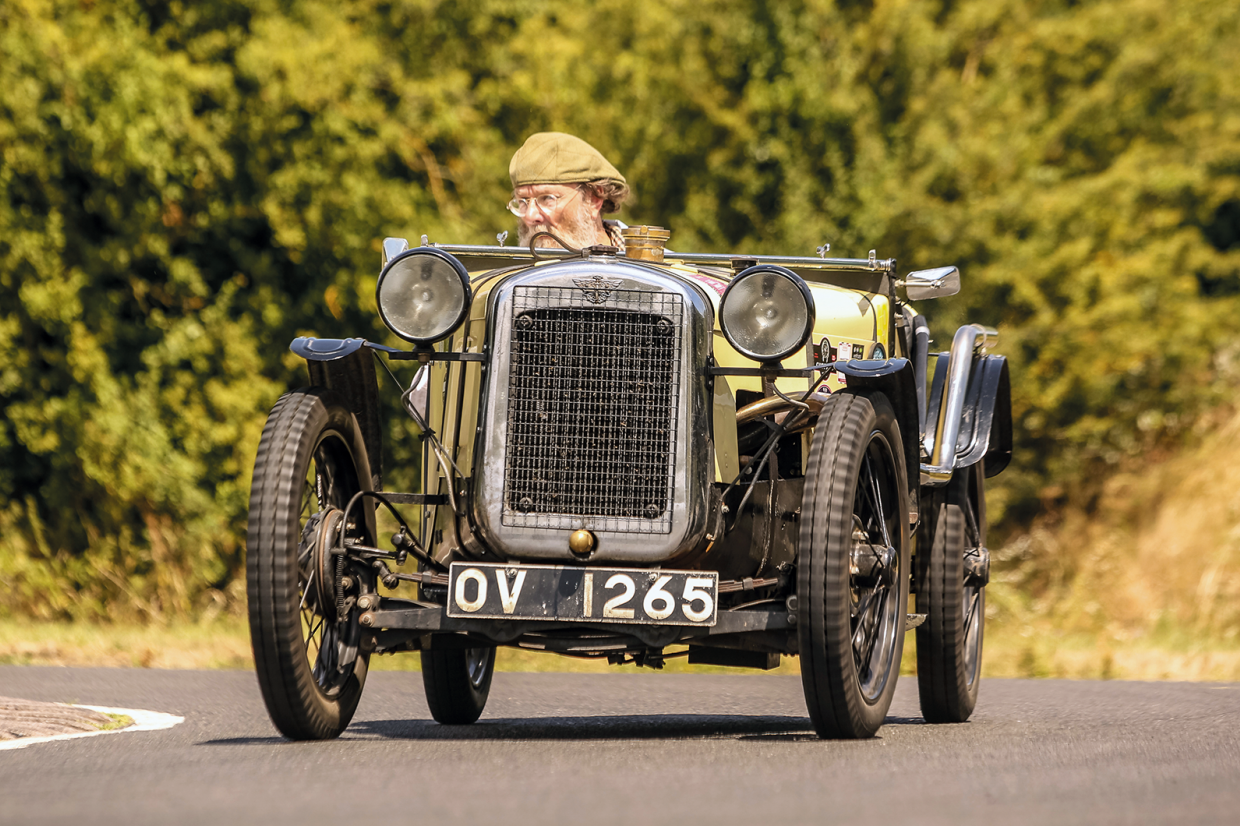 Nearly 85 years since official works competition ceased between Austin and MG, the owners of our two featured cars, Andy Storer and Duncan Potter, are firing volleys of chit-chat and mockery back and forth, a tennis rally of repartee – albeit with the smiles and winks of bonhomie.

Both cars’ histories feature a healthy dose of competition. Storer’s supercharged Austin Seven Ulster TT was built in 1930 and registered in 1931.

“There are far fewer Ulsters in blown TT spec than in unblown form,” he says. “As a TT, this was a works-supported car with a big fuel tank. It was exactly this spec that was used for the 1930 TT and 1931 Mille Miglia.”

“There is a gap in its history – we don’t know what happened to it after the mid-’30s,” Storer continues. “I bought it in 1975 as a wreck – it had been rolled – and restored it, which took 25 years! There isn’t any filler – it’s all metal, which is why it looks ripply. It is part of its history and I bought it with the intention of racing.”

Peering under the bonnet, the cylinder head appears to be more stud than head: “It has a 25-stud head and the only Seven with more than that is the one at Gaydon, which has 32 studs. The 25-stud engines were works units but they were made available to privateers, while the 32-stud ones were works-only – and they’re a very different kettle of fish.” 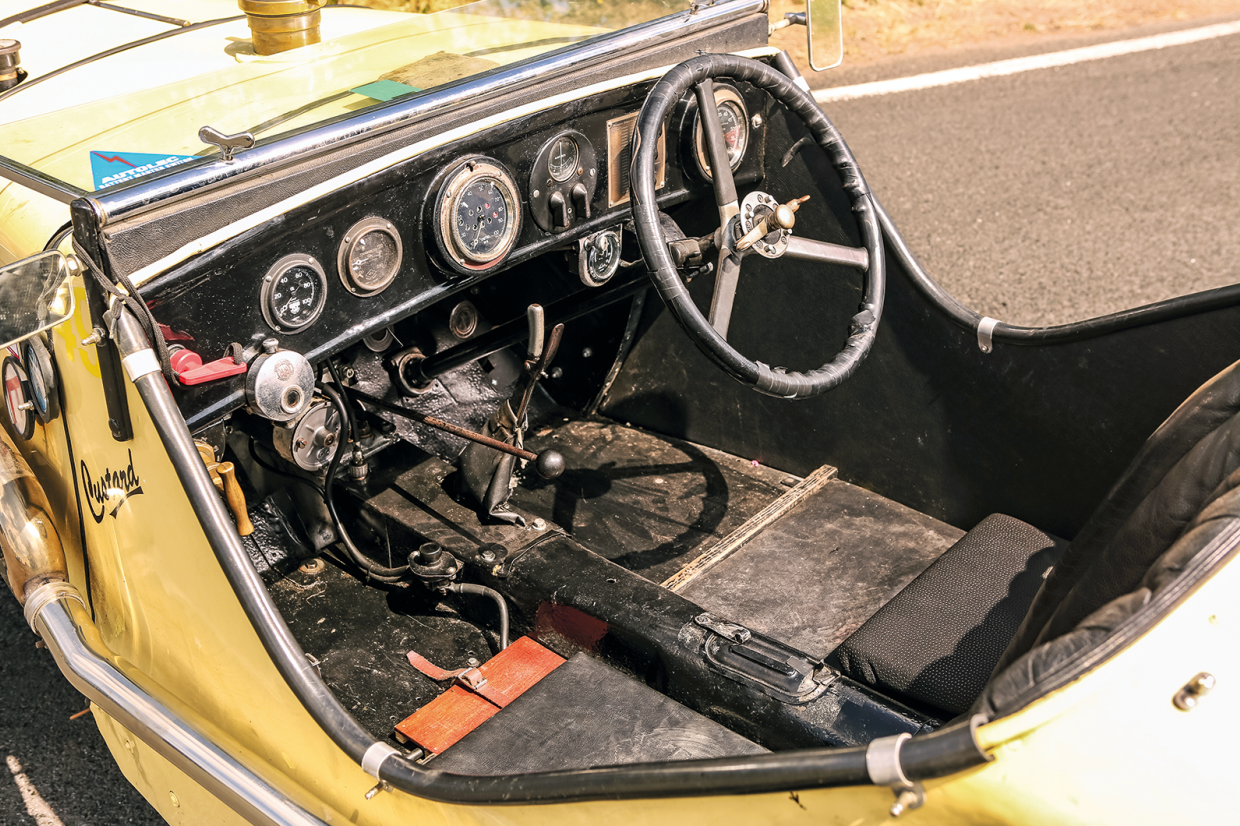 The MG C-type, chassis number 287 (the 36th of 44), comes with an extensive history, which reveals several changes during its life.

It was delivered to University Motors at the end of August 1931, but wasn’t registered until May the following year.

It is believed to have been used as a demonstrator – a tantalising prospect given that one of the salesmen was the talented driver Hugh ‘Hammy’ Hamilton, so there must have been some rather startled customers.

Potter’s father, David, bought the car in the mid-’90s from Northern Ireland, where it had been since the war.

“It still had its mid-1930s Q-type body on it,” he recalls, “which had come from GP Harvey Noble’s single-seater record-breaker. This C-type body was hanging on the wall of wizard engine-tuner Robin Jackson’s shed at Brooklands and was 10 quid! So the Handley brothers [who owned the car at the time] bought it while Jackson was organising a new crank – David Handley had broken it and he was waiting for a new Laystall item. He told us it was very expensive – it cost him £17 10s!

“He grafted the body onto the car over the winter, and fitted these brakes and so on. The steering gear came from MG’s competition department, when it was selling spares after the factory stopped racing.”

It’s a J4/Q high-ratio Bishop Cam steering box in place of the standard Adamant unit. “It also has a stronger front axle – probably from a J4 – with Q-type brakes,” adds Potter. “The car has a magnesium-bodied pre-war Marshall blower, too, which is thought to have come from another racer.” 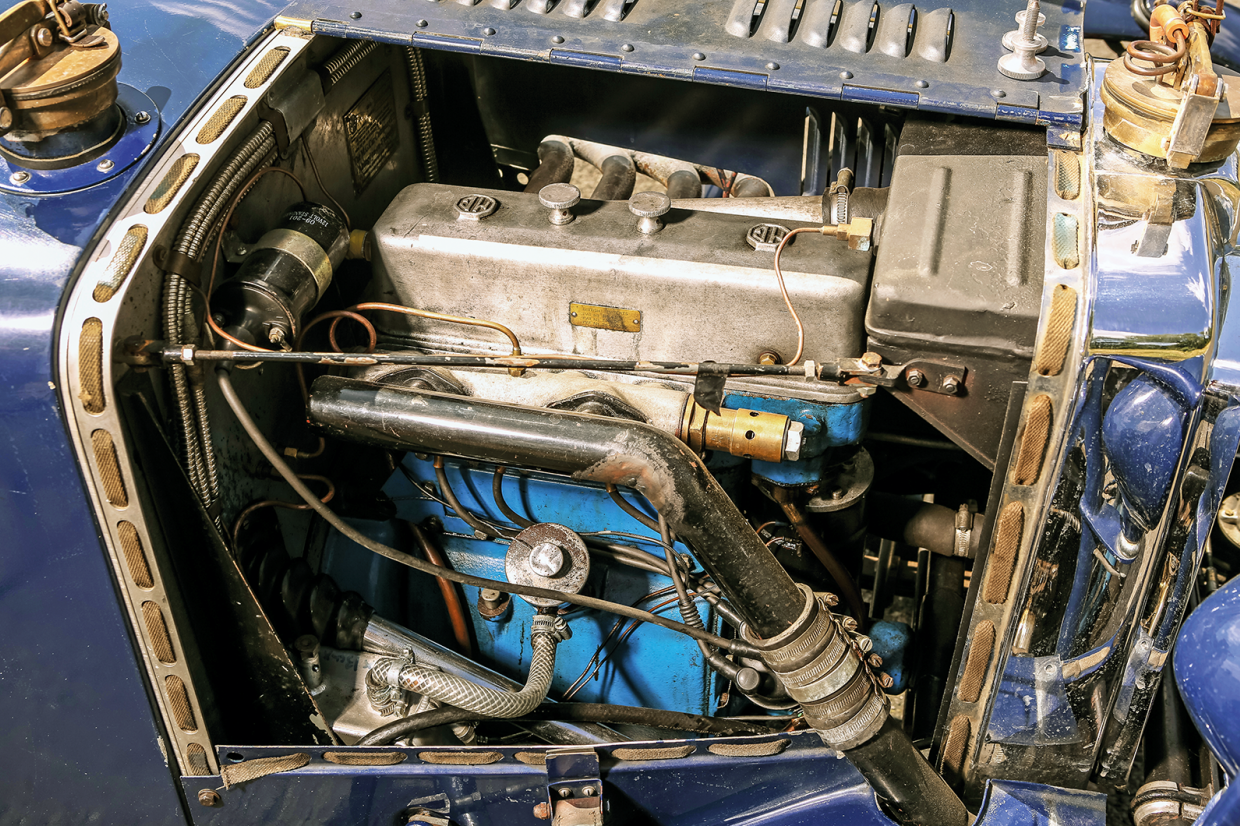 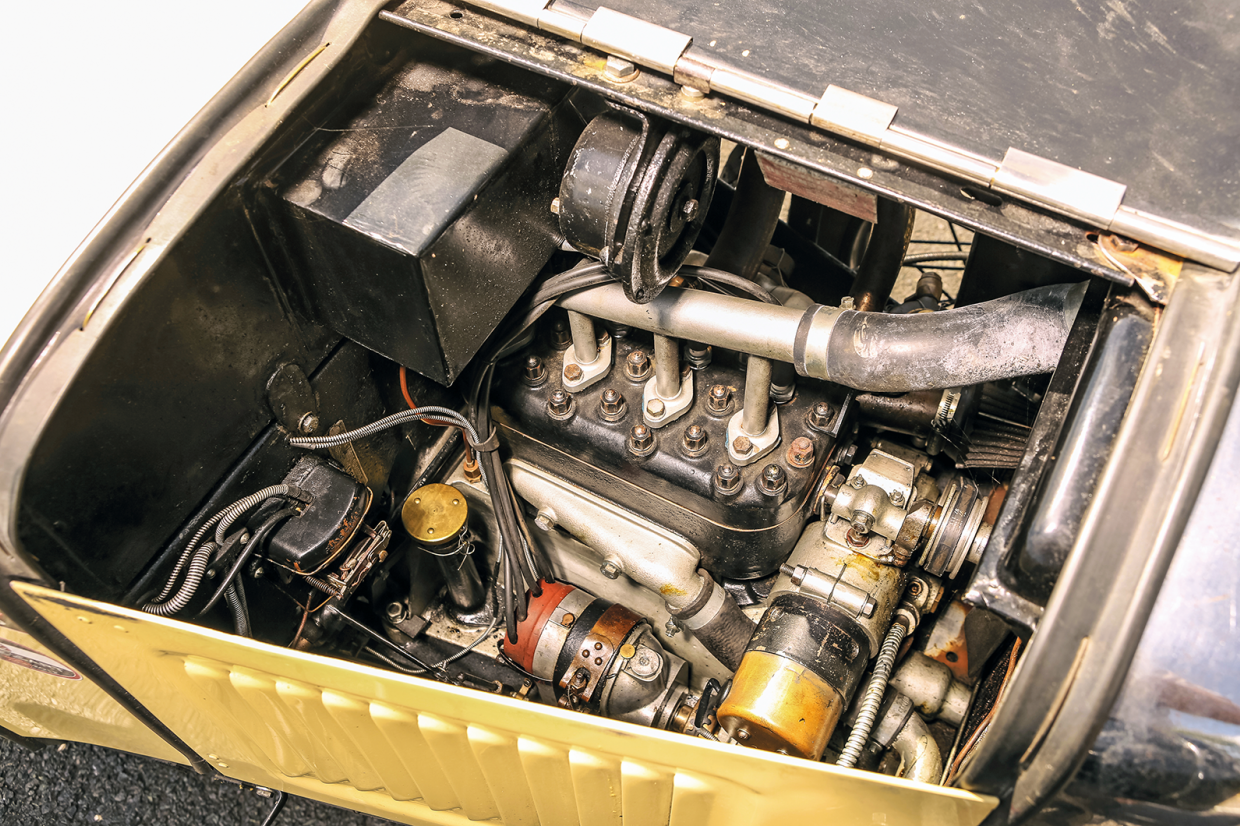 Taking to the track, the Midget looks more serious, focused and determined, like a K3 Magnette in miniature.

The Ulster has an almost cartoonish levity and cuteness to it – even if it didn’t bear the name ‘Custard’ on its flanks.

The photography session soon turns into a race. “I’ll try and keep behind you Andy, but it’ll be a struggle,” shouts Potter.

The gap shrinks. Revs are held for longer, gearchanges become quicker – until our photographer intervenes. 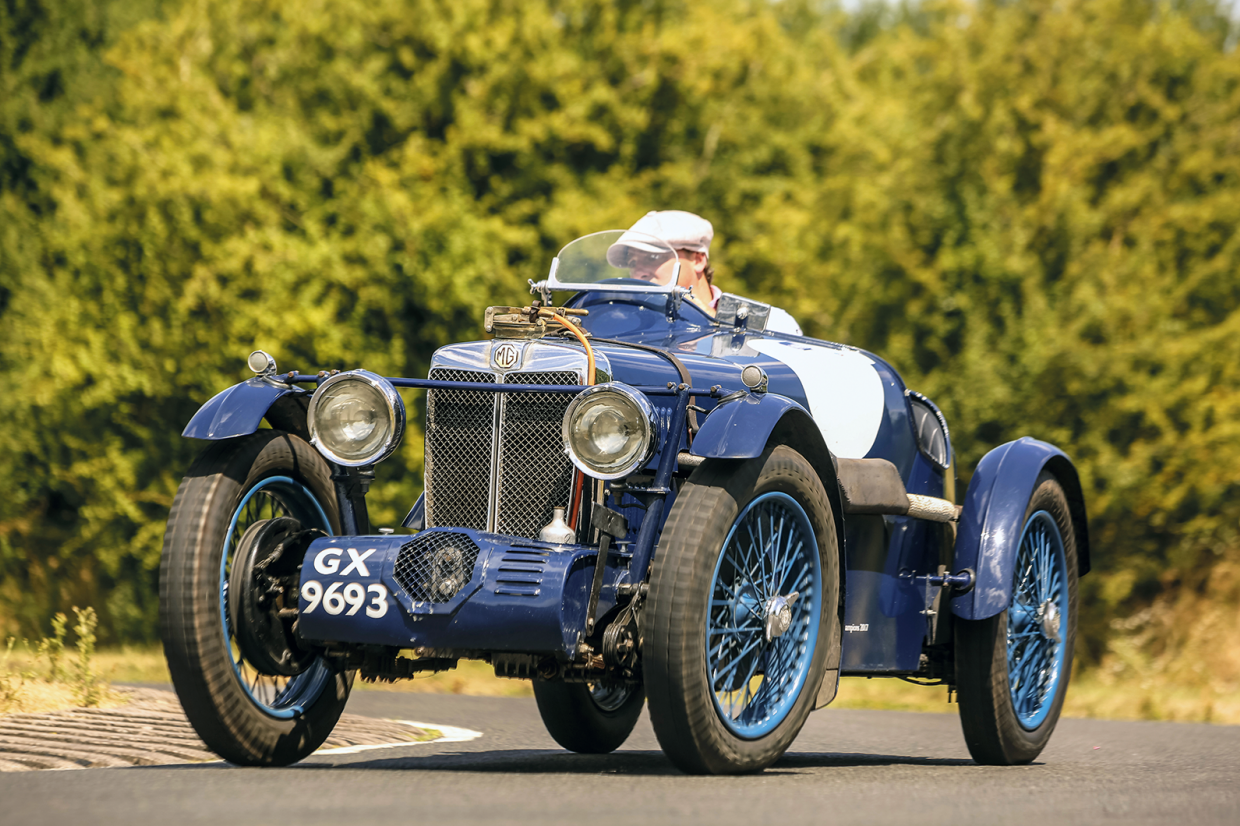 Now it’s my turn for a blast. In the MG there is plenty of room, and lots of familiar ‘Triple-M’ traits.

What there is of the Austin’s utilitarian interior is more strewn out, compared to the MG’s appealing layout and detailing. Even the C-type’s gearchange pattern – which it would give to later competition Midgets – takes but a couple of reassuring glances.

There is no need to reach for the handbrake because the Q-type brakes have plenty of power, but the Bishop Cam steering is not great: it’s well geared, but straight ahead is rather vague.

Through corners, however, it weights up nicely and complements the MG’s strong front-end grip and stability. On song between 5-6000rpm, the invigorating performance from that little supercharged 746cc ohc screamer belies its considerable age. Cars in period were rated at 50-53bhp at 6200rpm.

The remote gearchange is so wonderfully precise and mechanical that changes up the ’box seem to happen before your digits make contact. The rear dampers have gone on strike, so the ride gets choppy as undulations reverberate through a chassis that is designed to flex.

This only adds to the frenetic experience as speeds and noise swell, and there’s enough turbulence to blow your grinning cheeks around your ears. 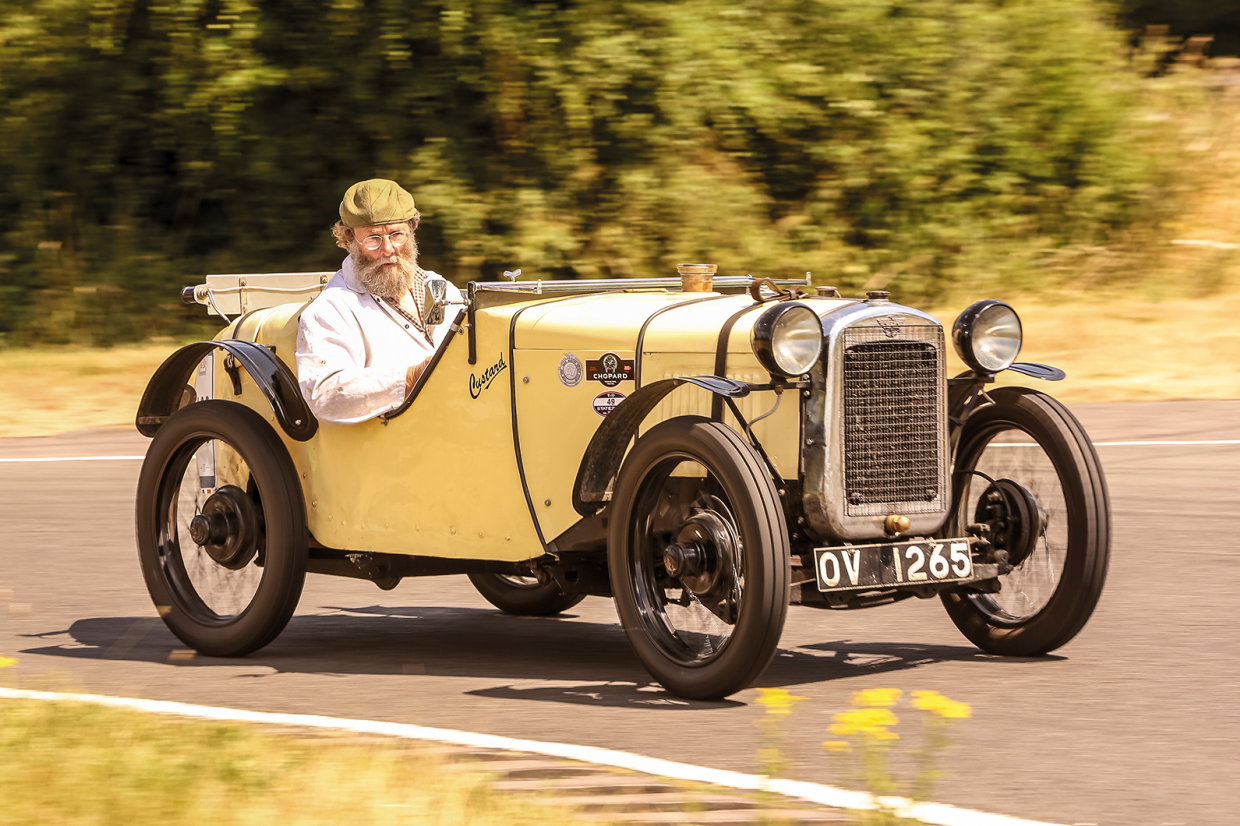 Getting my poundage into the Ulster is not so simple: I have to sit on the floorboards. Legs and feet are contorted into the footwell and on to the close pedals with the sort of determination required to stow uncooperative jump-leads.

Its 6ft 3in wheelbase is half a foot shorter than the MG’s, and I’m missing every inch. The seating position still feels higher, because the Ulster does without the Midget’s underslung rear axle.

The Austin feels lighter, more immediate. Power from the 747cc unit – peaking at over 50bhp in TT spec – is more linear and progressive in its delivery, which is just as well given the slow, wand-like three-speed gearlever and the reversed, dogleg shift pattern.

The Ulster’s Austin steering box, though, beats the MG’s. Free from slop, faster and more accurate, it’s very bright-eyed and bushy-tailed; the slightest input elicits a waspish response from the front end. Be too ham-fisted and you sense the Ulster would at best cock a wheel, at worst the sky and ground would swap places, due to its lower lateral grip than the MG.

Acceleration isn’t as impressive as in the Midget, maybe a product of my twisted limbs and unfamiliarity. Progress is not so frenzied; with 12psi of boost it’s on song at 4000rpm but, as in the MG, exhaust and wind noise drown out the Cozette blower.

The ride is smoother and there’s less buffeting behind the ’screen than in the MG. Its braking – thanks to its lower weight (784lb against 1456lb) – equals the Midget’s, too. 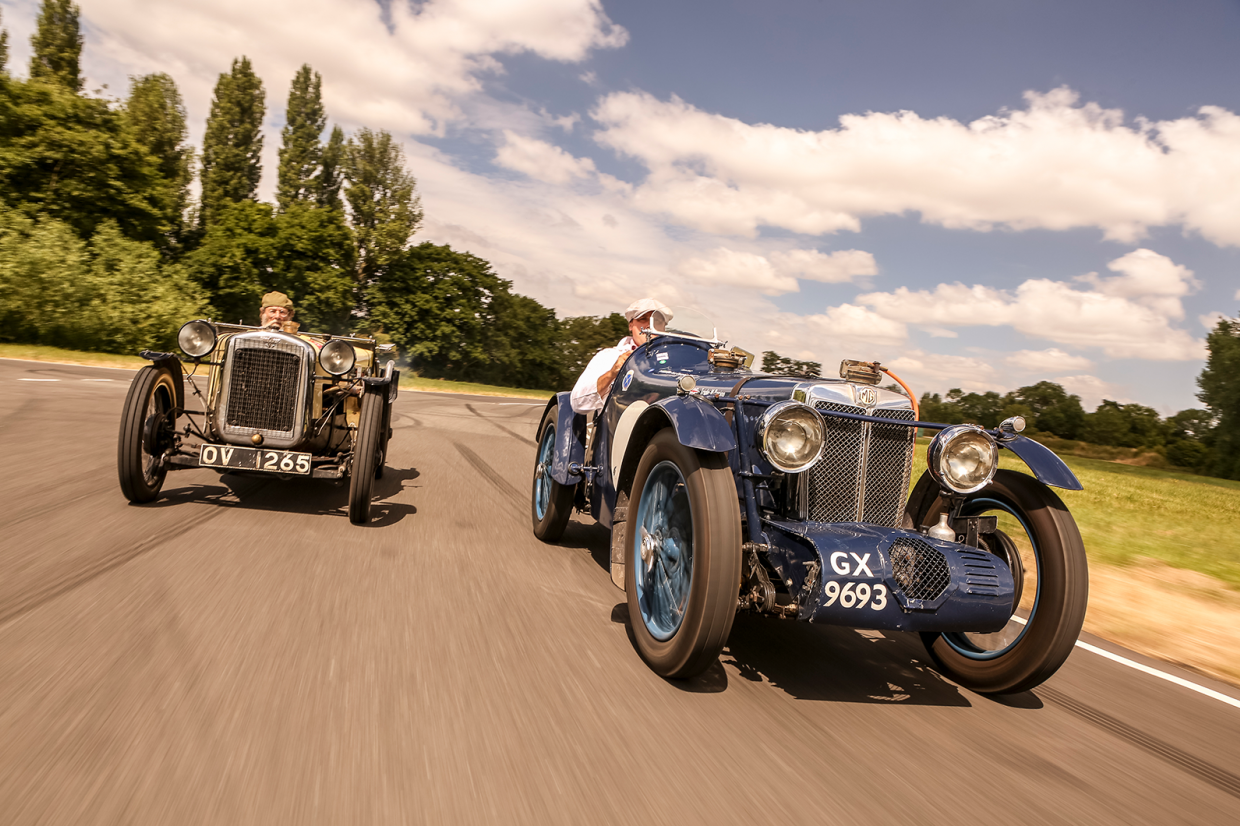 “The MG’s more advanced four-speed ’box gives you that extra ratio, which gets you away quickly,” says Potter. “At the immediate start the Austin would beat the Midget off the line, but then I think the MG would come through and fly ahead.

“By the time the Austin has hit second gear, the MG has already gone through two. You’re up into third at 6500rpm, then into top. As we both hit top gear, however, I think you’d reel in the C-type and overtake it with the Austin’s extra power and lighter weight.”

“Well, I was catching you along the straight once I got it into top,” agrees Storer. “The Seven’s first-to-second gearchange is lumpy compared to the MG, and that’s the real difference. As soon as I get into top, I’m after you!”

“You’ve probably got about twice the weight in the MG, so it only works when you wind it up to 5500-7500rpm,” ventures Potter.

“Whereas we seldom take the Austin above 5000rpm,” counters Storer. “That’s what makes the Seven so tractable for road events such as the TT and Mille Miglia.

“When Charles Goodacre took this car to the Mille Miglia, he said it was capable of 95mph – that’s 6000rpm in third! The MG would be better for the track – for a Brooklands-type event. You just get it into top and keep it going.” 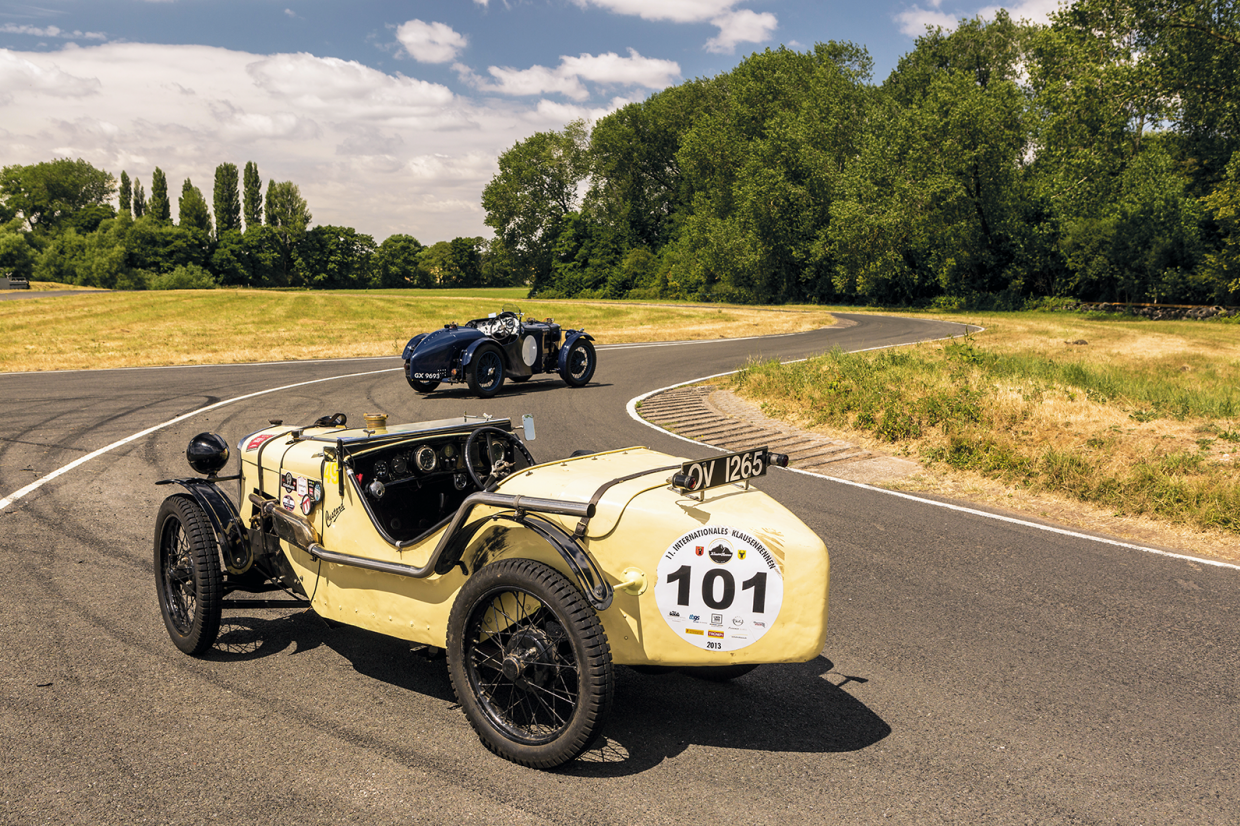 As Potter confirms, those were exactly the competitions in which the Midget excelled.

“They won their fair share of Ards TTs and such, because you were using the revs all the time,” he says. “I’ve hit 95mph in this car at Snetterton without the wings and lights, so I guess that it wouldn’t be too far from 100mph if you kept it running.

Dream drop-tops: Aston vs Mercedes vs Citroën vs Jensen vs Rolls