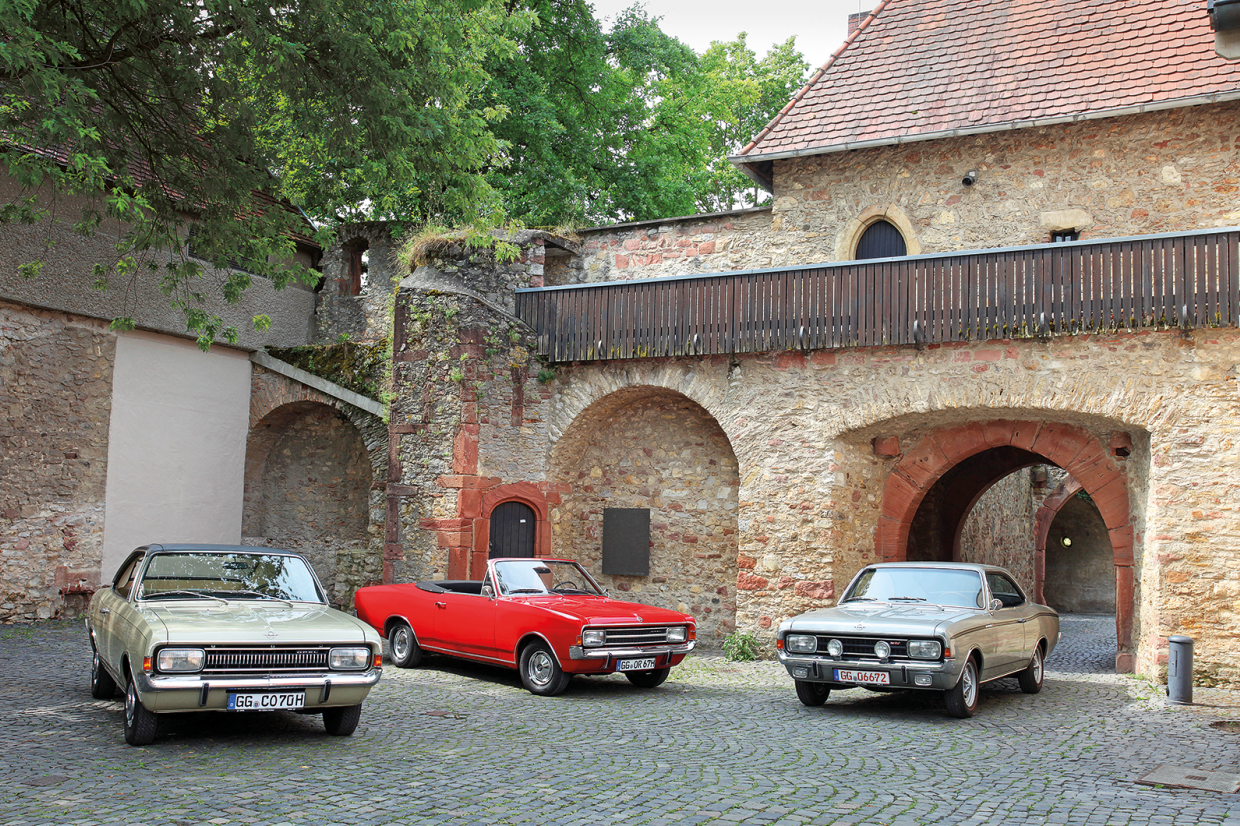 Projecting American tastes and proportions onto European-sized cars has not always delivered happy results, but it was an art that General Motors had mastered to near perfection by the mid-1960s at its German outpost in Rüsselsheim.

Thus, there is an elegant confidence about the Rekord C range – built between 1966 and ’71 – that is as easy on the eye as a Herb Alpert tune is on the ear.

The world has rather forgotten these competent, unpretentious yet stylish middle-range Opels with their curved hips and neatly resolved detailing.

In West Germany, the Rekord C and Commodore A were so ubiquitous they became mobile street furniture – produced to the tune of 1.2 million examples for a home audience that wanted something more glamorous than a VW but couldn’t stretch to a Mercedes-Benz. 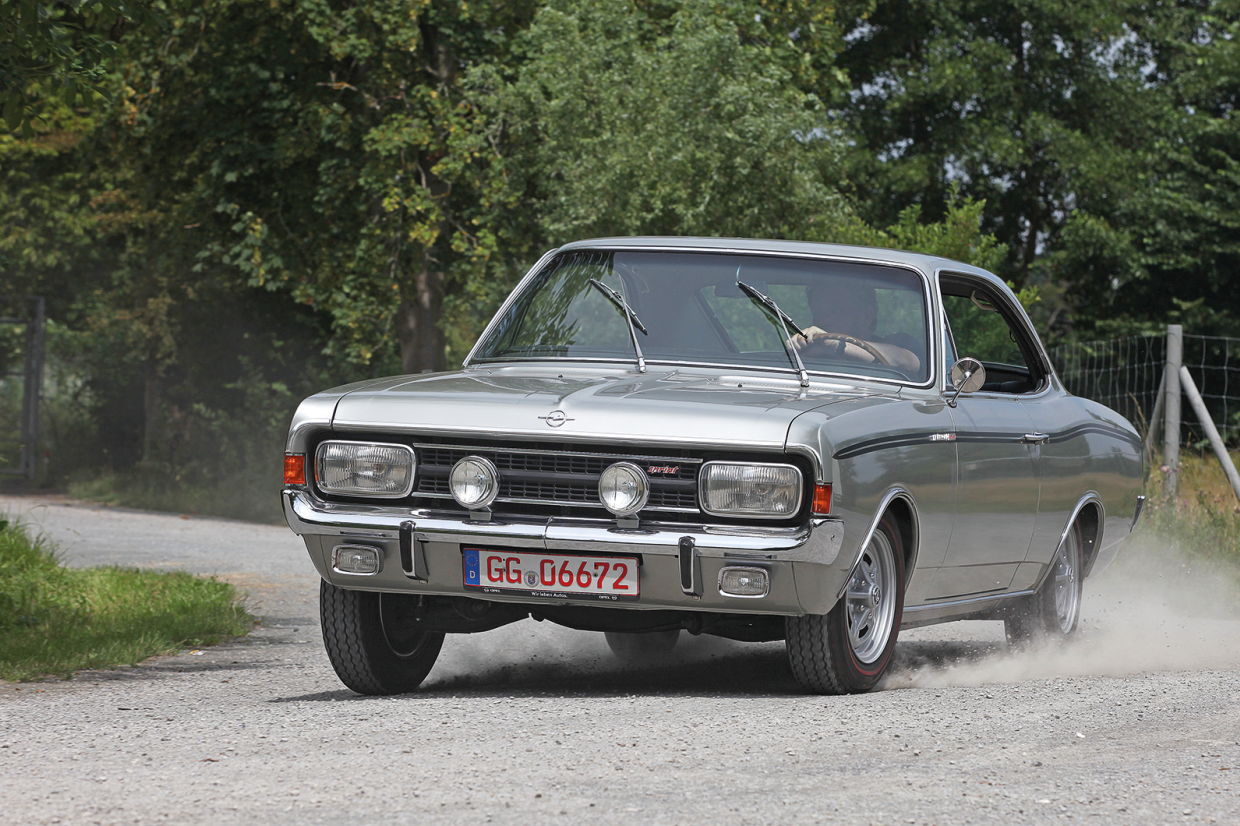 The Sprint handles tidily on its well-located live rear axle

In the UK, they represented most people’s first awareness of the Opel marque, and come from a long-forgotten time when almost any foreign car was seen as upmarket.

When GM started importing the Rekord C in 1967, it carefully picked variants that wouldn’t harm sales of the superficially similar Vauxhalls.

Instead, it aimed them at the posher ‘young executive’ 2-litre saloon sector that was dominated at the luxury end by Rover and Triumph, and aspired to by the flashy Ford Corsair 2000E at the other. 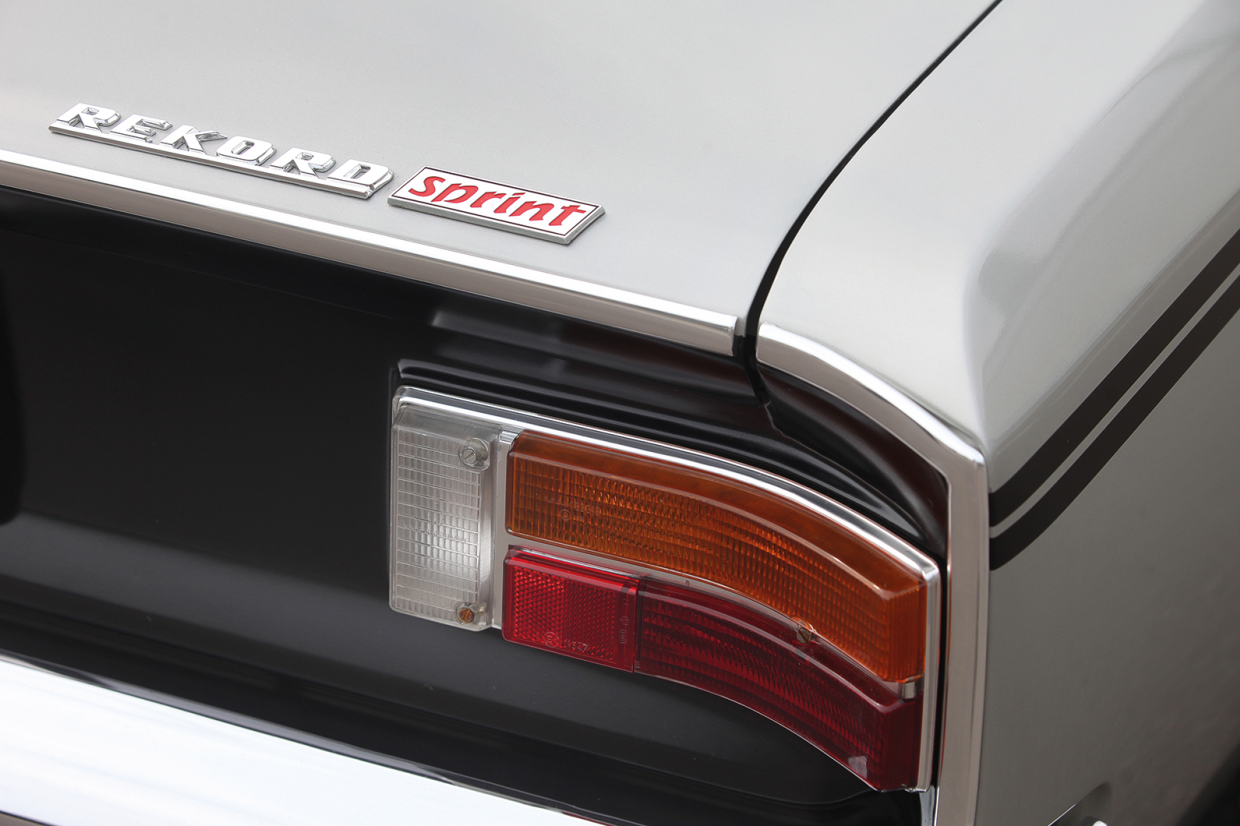 This Sprint Coupé was found in France

It sold not only on its equipment, such as reclining seats, but on an image of West German quality and reliability that was already gaining credence.

Behind the glitzy looks, there was an aura of sensible, practical durability about an Opel that distanced it nicely from Vauxhall’s well-earned (and hard to shake off) ’60s rust-bucket image.

Its products echoed the Detroit idiom of variety, being produced and sold on a Stateside model that encouraged endless options of trim and specification. 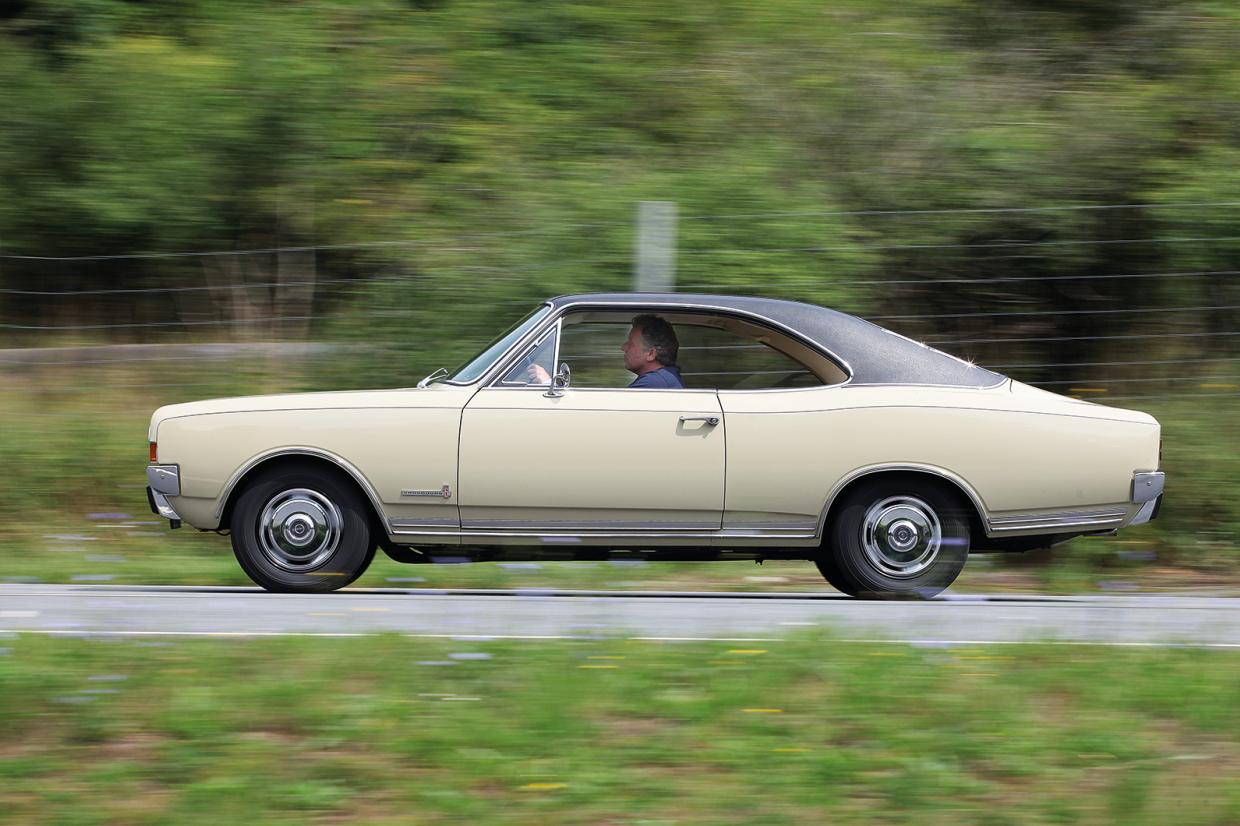 The bodyshell is the same on both the coupés, but the Commodore has more brightwork

The Rekords and Commodores formed a range that embraced 31 different versions, and no fewer than nine distinct body styles if you factor in the two- and four-door saloons, the ‘CarAVan’ estate and not forgetting the panel van.

Commodores were always straight-sixes while four-cylinder Rekords spanned 1.5-, 1.7- and 1.9-litre engines – as well as the option of a 2.2-litre ‘six’ – all with Opel’s rugged cam-in-head architecture.

The Rekord and Commodore coupés you see here reflected the West German love affair with two-doors in the 1960s and ’70s – remember the weird Granadas they sold in Germany? – and it is the fastbacks that most people seem to recall, if they recognise these Opels at all.

So that’s what we have assembled here. The bonus car is a Rekord cabriolet that you will perhaps be less familiar with – a low-volume oddity based on the two-door saloon bodyshell and built by coachbuilder Karl Deutsch on behalf of Opel. But more on that later. 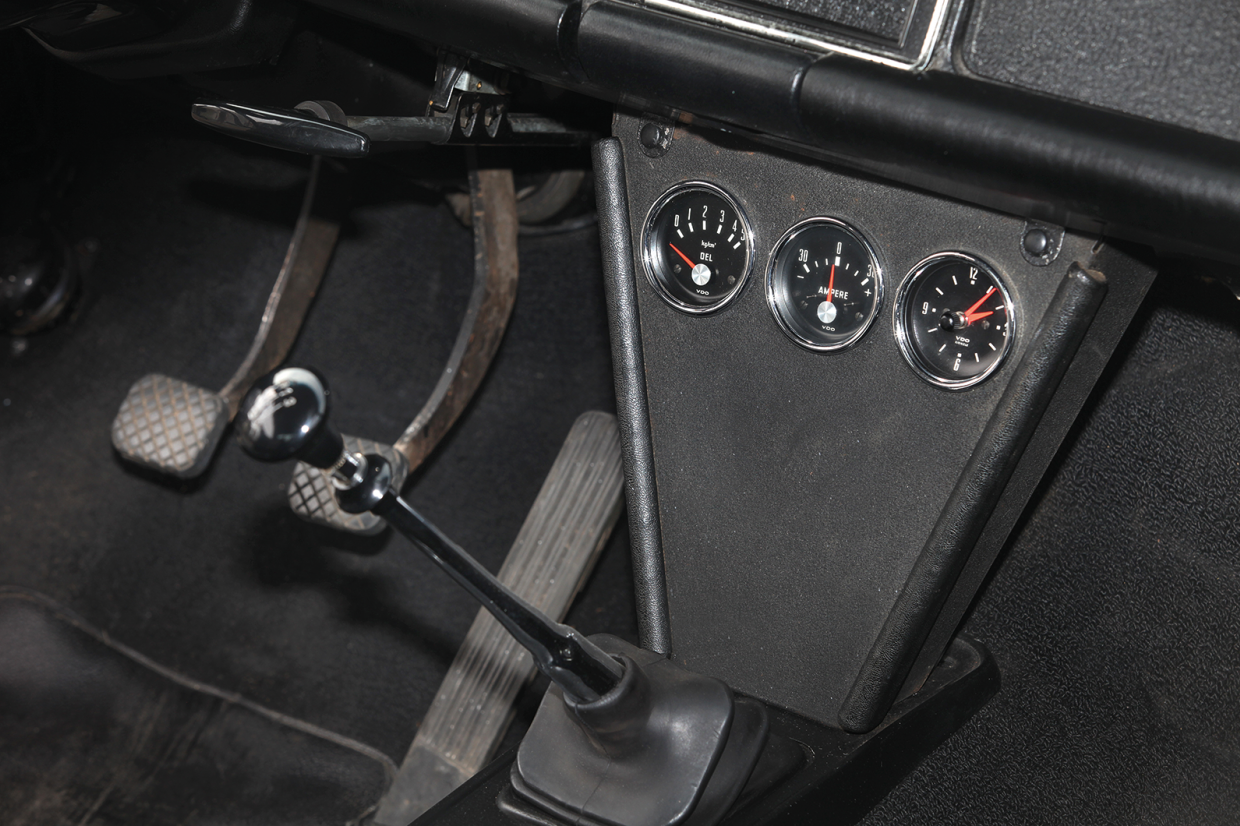 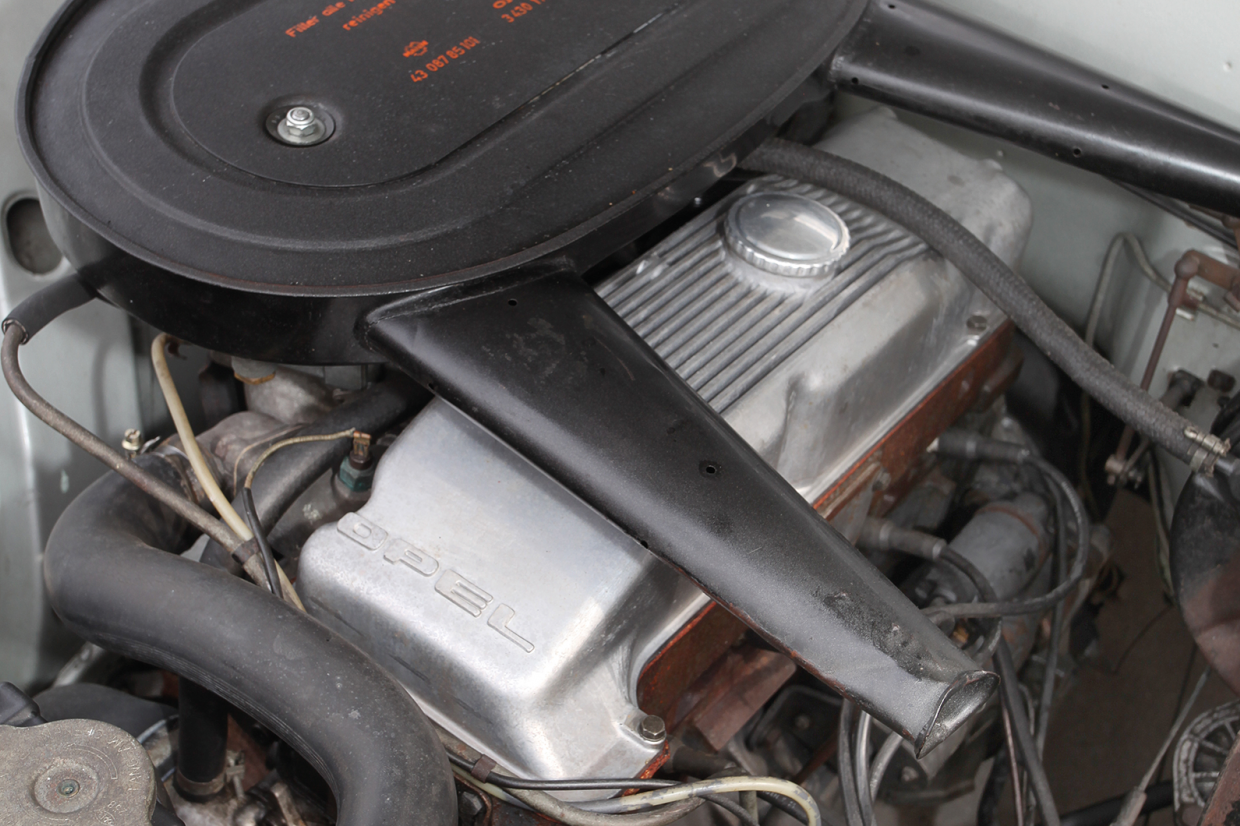 Once everyday fodder, these cars are now rare and collectable in Germany.

This all-original Rekord Sprint Coupé was discovered in the south of France, where the drier climate had allowed it to survive.

Experts say that most of the Rekord and Commodore coupés in their home country were lost to rust in the 1980s, but luckily Opel was able to acquire the featured gold-beige Commodore 6 in similarly near-perfect condition around 20 years ago, with only 12,000km on the clock.

Both the Sprint and the Commodore 6 cut handsome pillarless profiles, with sweeping fastbacks that flow nicely into the rear wings.

They share identical sheet metal all round on a fully stress-engineered, load-bearing structure, and ride on a longer wheelbase than the previous Rekord B. 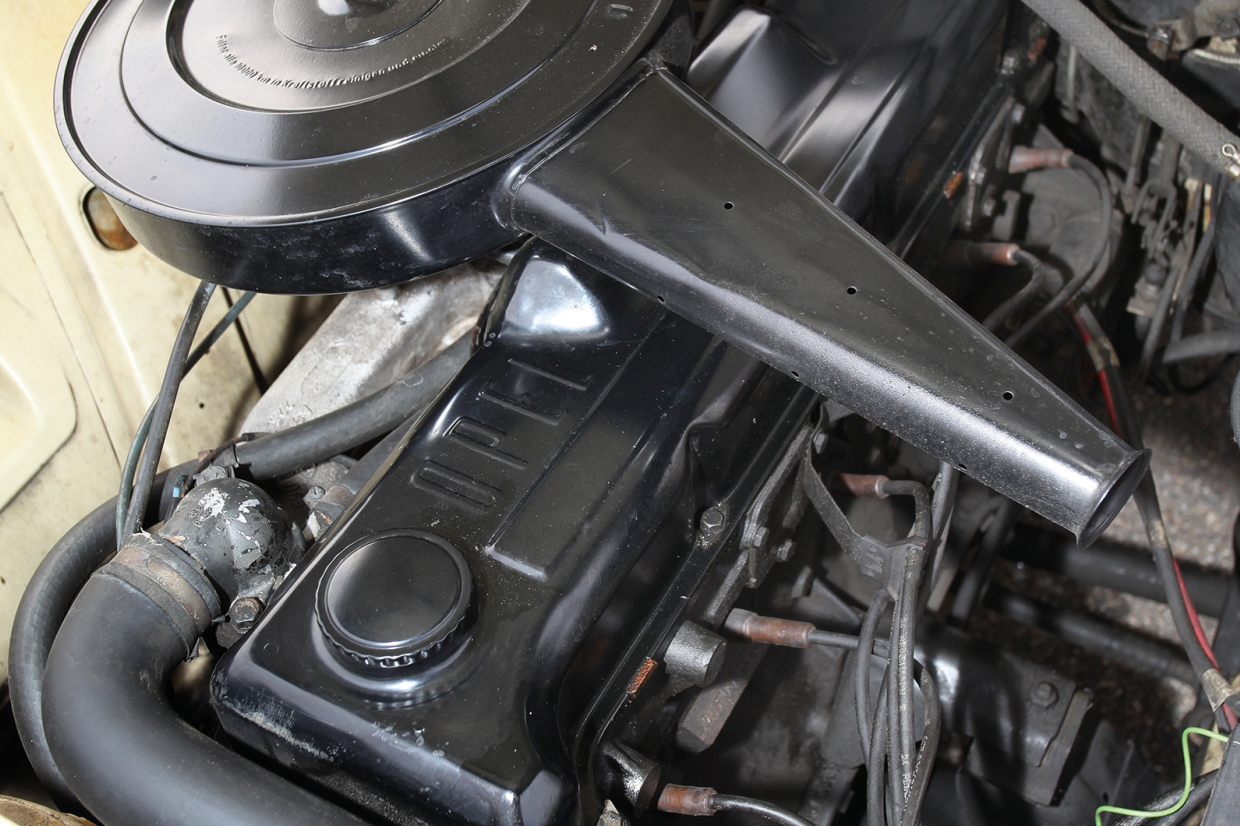 There’s a smooth straight-six for the Commodore 6 Coupé

Beyond the long frameless doors, they seat four easily – five at a pinch – so they were clearly more of an American concept of what a coupé should be, complete with massive 13cu ft-plus luggage capacity.

The engine bays offer a workmanlike presentation with an agricultural painted finish rather than a sense of engineering pride.

The Commodore 6’s deep cast-iron straight-six is non-crossflow with a miserable-looking inlet manifold for the single Solex carburettor. The Sprint’s twin Solexes look slightly more promising although they are not particularly easy to set up properly.

The Commodore’s interior is about middle-of-the-road comfort. There’s lots of crash padding, a half faux-wood dashboard behind the deeply dished wheel and a basic medium/long wave Blaupunkt Bluespot radio for tuning into James Last and Klaus Wunderlich on those long autobahn trips, but a clock rather than a tacho. 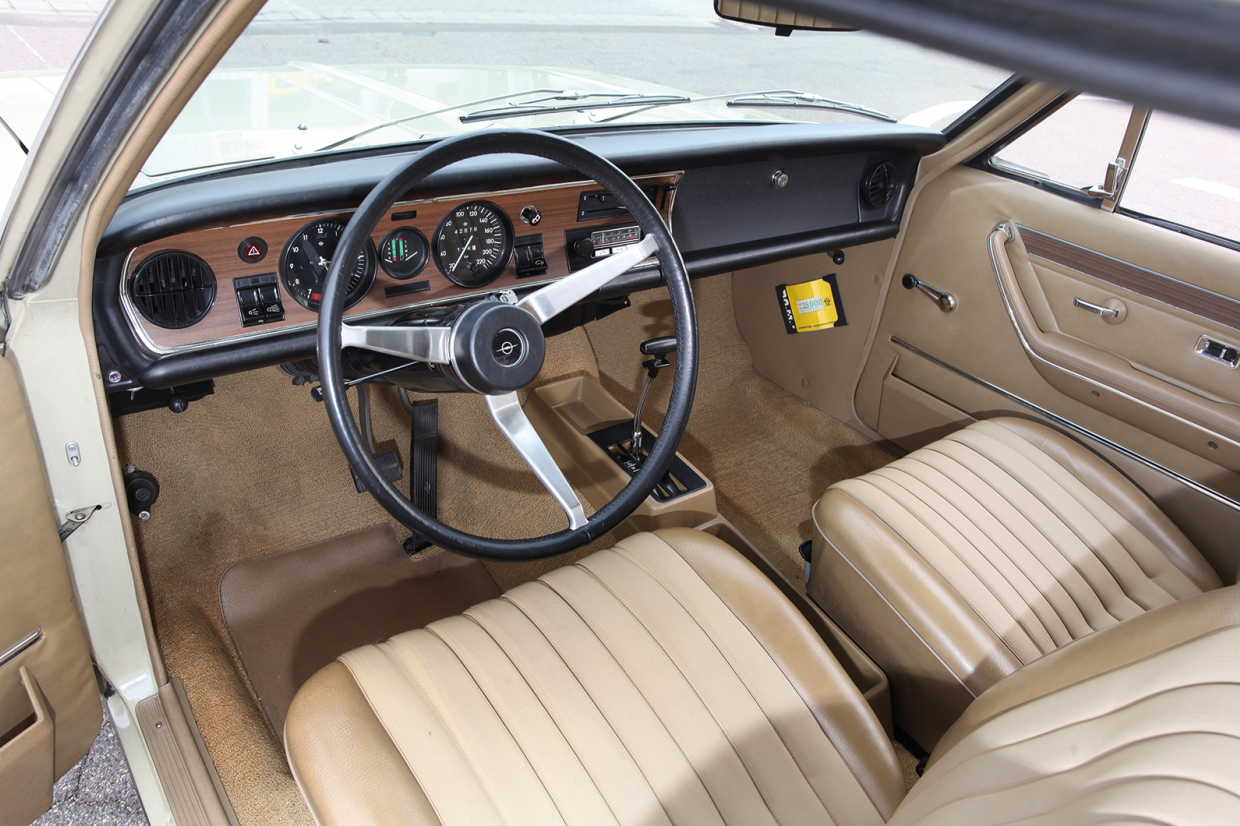 The Commodore 6 Coupé is plush inside, with cloth inserts and fake wood

The Sprint does have a rev counter, as befits its sportier pretensions, plus amps and oil-pressure gauges and a wood-rim steering wheel.

Both have generously dimensioned front seats – half-cloth, half-vinyl in the Commodore – dainty pedals and a solid, pleasing sort of finish that’s a subtle blend of German and American tastes.

The fat, sweeping C-pillar provides a predictable blind spot but still looks dramatic all these years on.

The six-cylinder car has a leather-rimmed steering wheel through which you can sense the heft of the engine as you turn in.

It would definitely be a better drive with power assistance – which was an option – to mask the understeer.

The original owner of this example opted for the three-speed automatic gearbox, so the 2.5-litre’s performance is smooth rather than exciting. 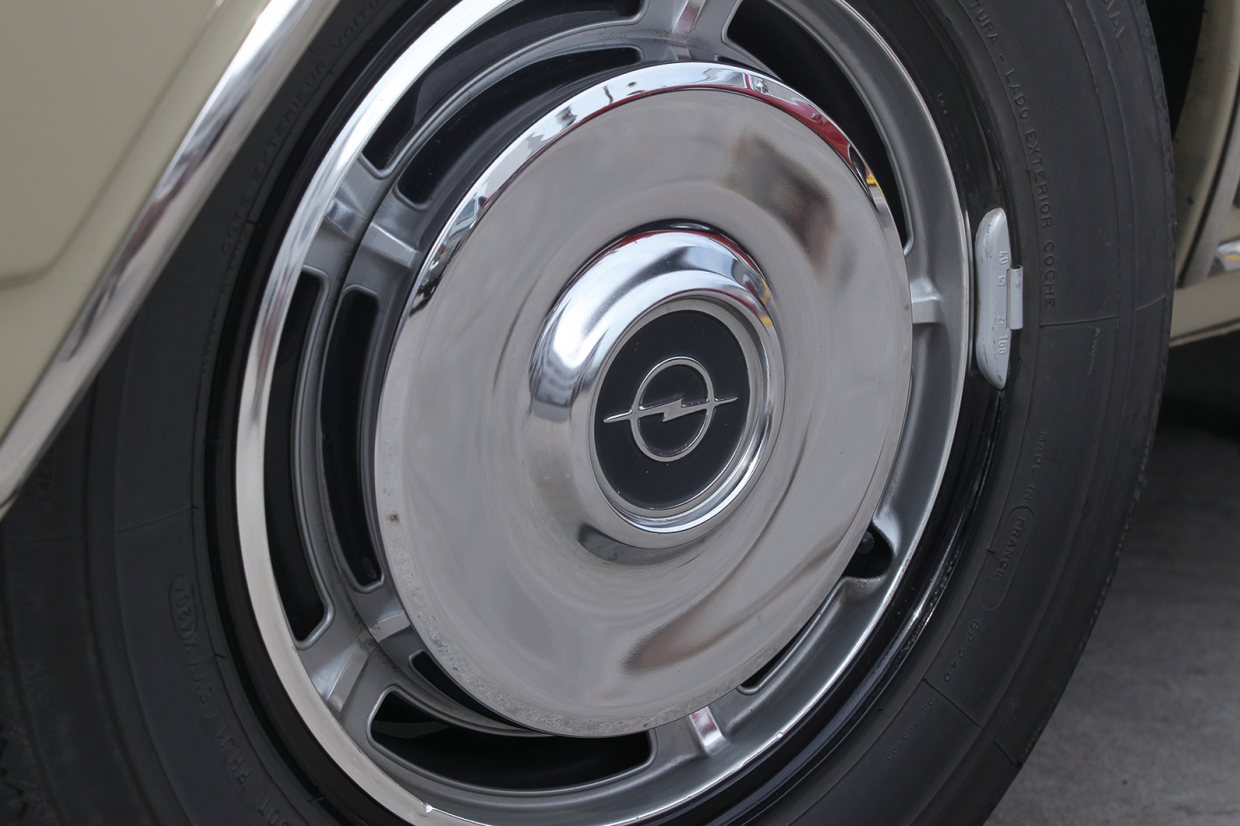 The Commodore’s hubcaps are posher than those on the L

That said, there is a useful surge of acceleration in kickdown between 40 and 80mph – accompanied by a determined, raspy sound from the high-camshaft, short-pushrod top end.

By 105mph, it feels as if it is pretty much all over. Anyway, if you wanted a really quick Commodore you bought a twin-carb 130bhp GS or an injected 150bhp GS/E.

Surprisingly, Opel’s own collection, from where these come, doesn’t have an example of either of those, which probably indicates how scarce they have become – even in Germany.

In the UK, where they were heavily pushed as a racy continental alternative to a Triumph 2.5PI or a 3-litre Capri, they must be all but extinct. 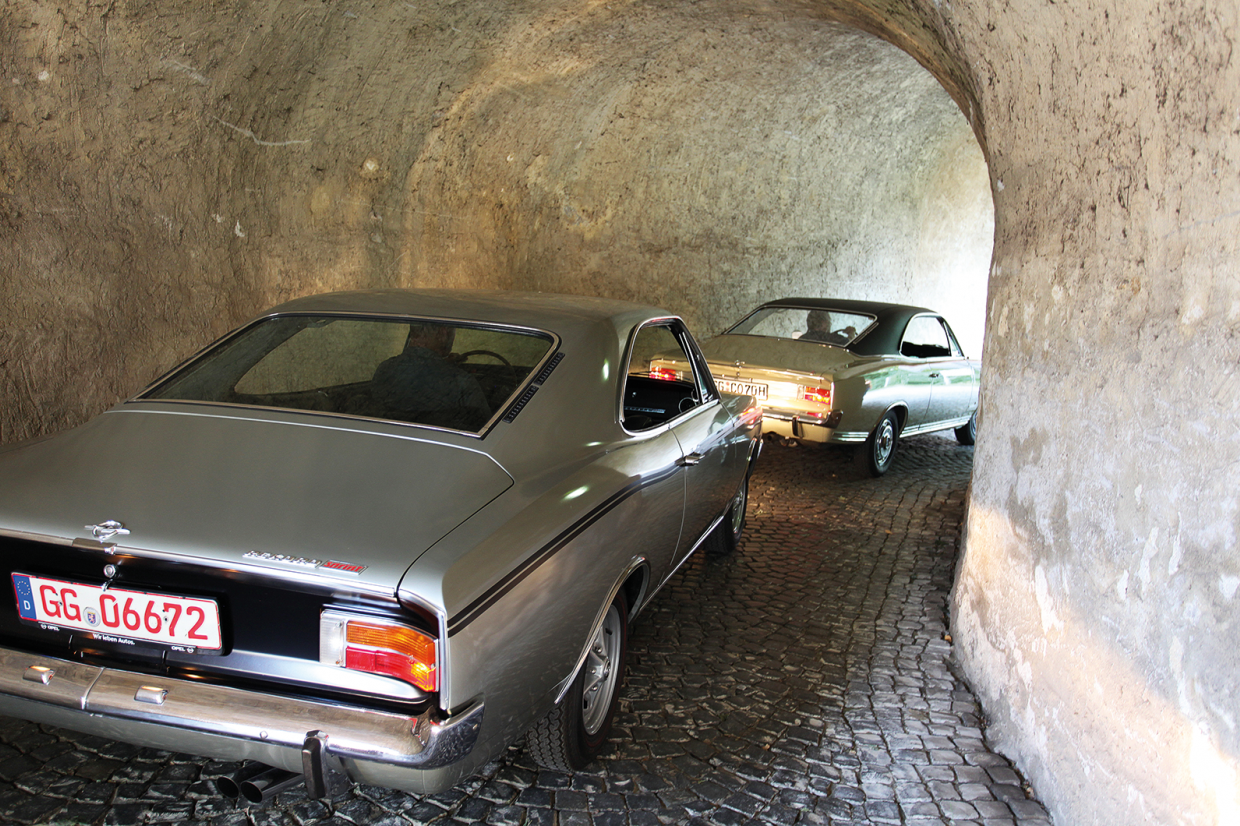 This 1970 single-carburettor model in subtle Sierra Beige metallic is a swish and dignified town carriage – albeit a slightly thrashy motorway car – but one that handles better out in the country than the initially heavy steering leads you to expect.

With its properly located coil-sprung live rear axle and anti-roll bars at both ends, progress is surprisingly tidy.

You can happily drive it near its limits without ever feeling that it will bite and, somehow, that live axle rarely betrays itself even on bumpy surfaces. It is certainly a cut above the Ford Cortina, if not quite in the Peugeot 504 class. 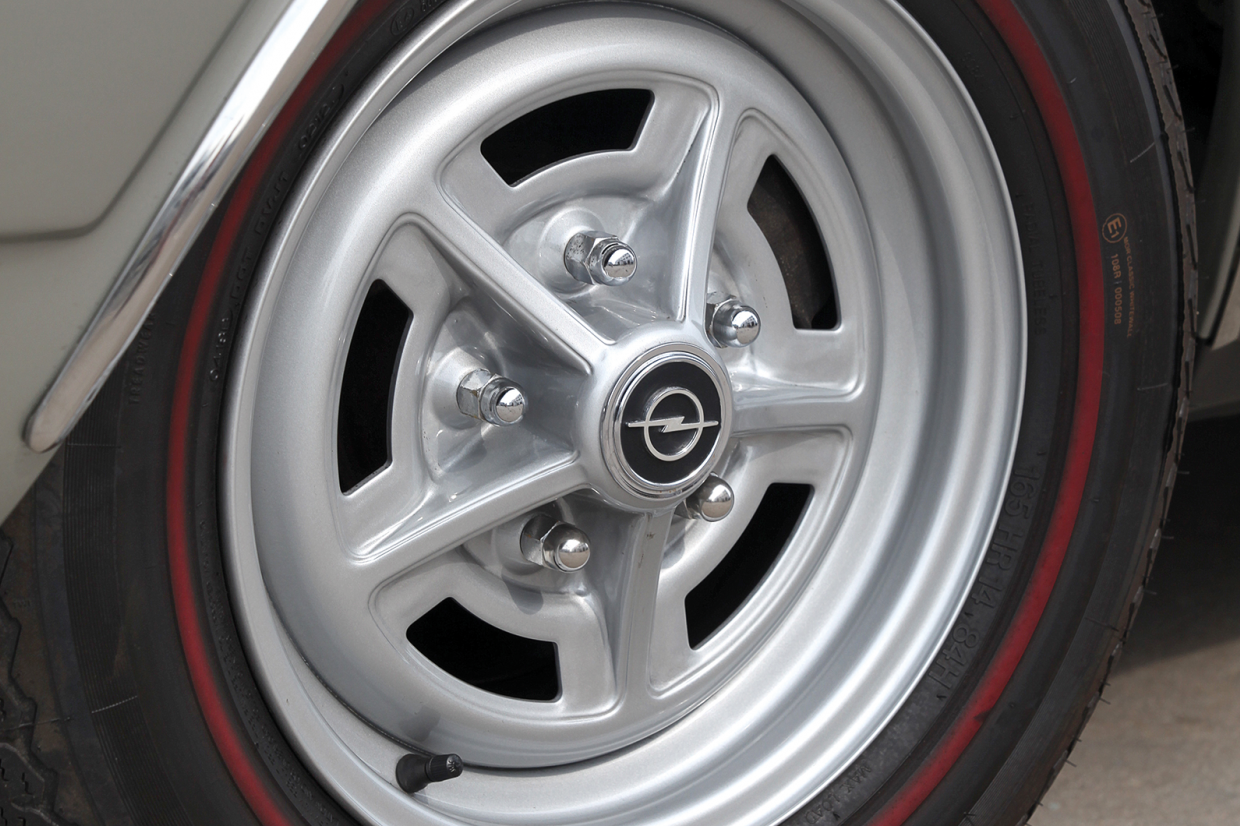 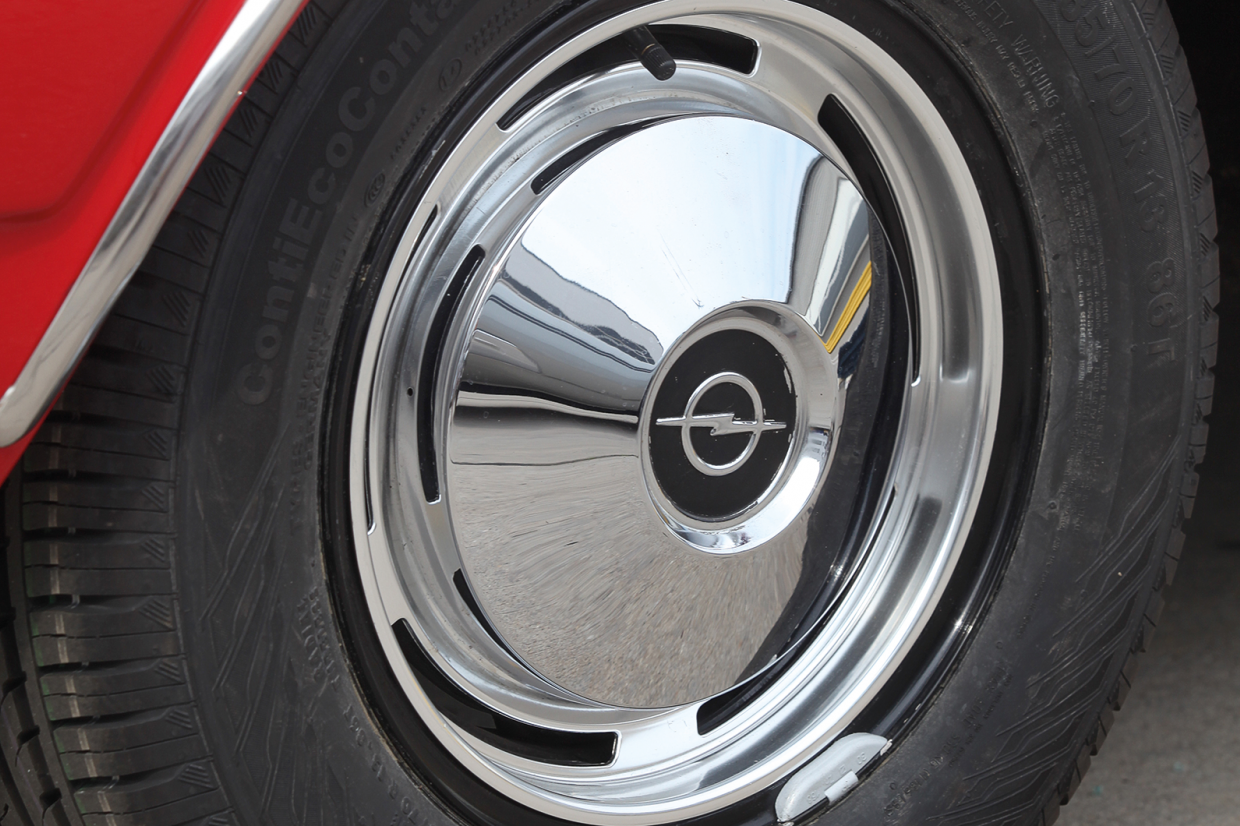 Sculpted steel wheels on the Sprint (left); basic hubcaps for the L

The Sprint is much lighter to manoeuvre and has less understeer than the Commodore, thanks to its shorter, lighter engine.

If you care to use an uncouth 6000rpm (500 over the power peak), it will do a handsome 85mph in third and feels like a faster, more aggressive car, getting there with quite a lot of throaty boy-racer intake roar from its twin carbs.

In fact, the figures show that the Sprint’s straight-line urge is about on par with a manual Commodore. It is the sort of a car that encourages you to don your nylon rally jacket and do a lot of superfluous throttle blipping between gears.

There is no romance about this 1900H engine, though it just feels unburstably lusty. 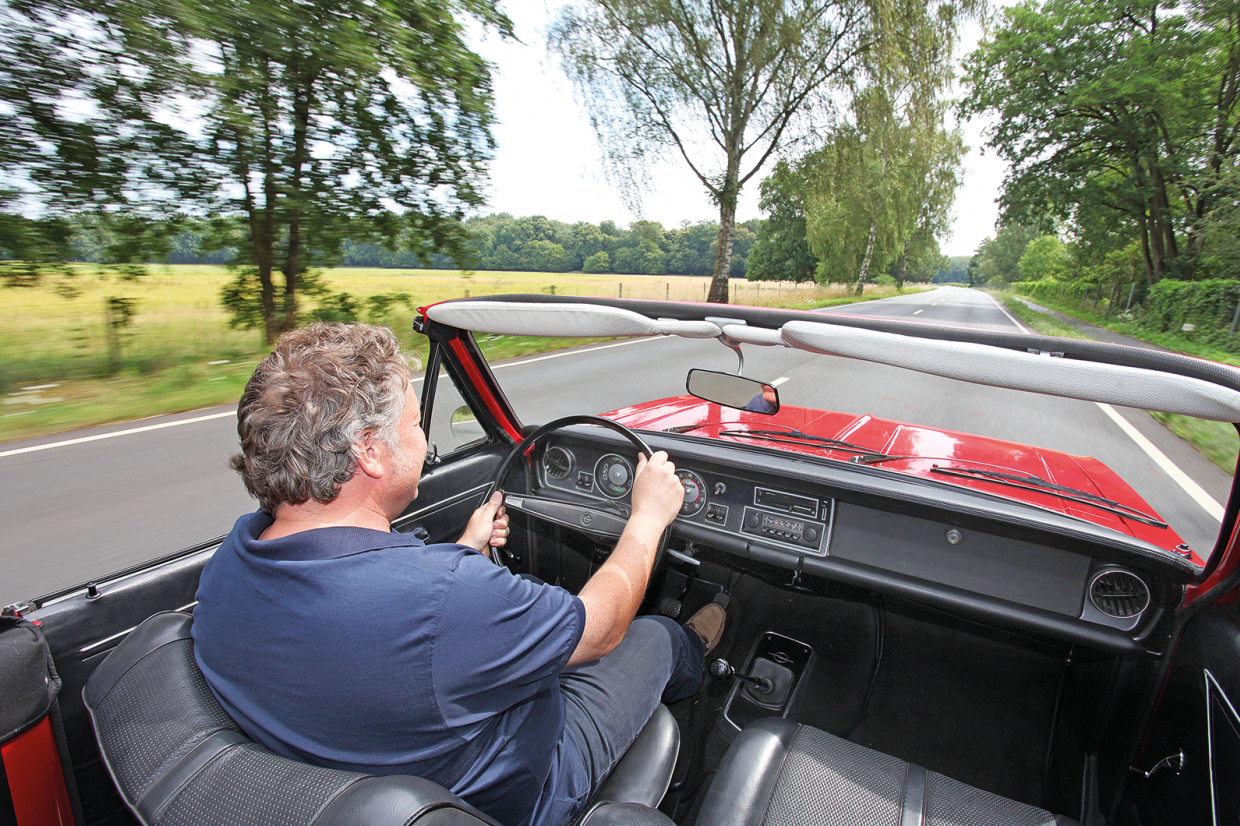 This super-rare cabrio, built by Karl Deutsch, was based on an L, hence the basic but well-made trim

In some ways, the Rekord soft-top is the nicer place to be on a hot, sticky day.

It is based on a two-door 1700L saloon and is one of only 50 built by Karl Deutsch of Cologne on the Rekord C/Commodore A platform. The Opel Museum also has one of the firm’s earlier cabriolet efforts on the Rekord A in its collection.

At DM4000 on top of the DM8000 base price of the Rekord C saloon, they were rare but undeniably pretty – with the roof chopped 2in above the ’screen rubber and a hood that stows flat behind the back seat.

That robs some shoulder room from the rear passengers and leaves the impression of a long slender rear deck not unlike a Corvair convertible.

But it is a genuine four-seater drophead, an increasingly rarefied type of car in the world of family motoring in the 1960s. 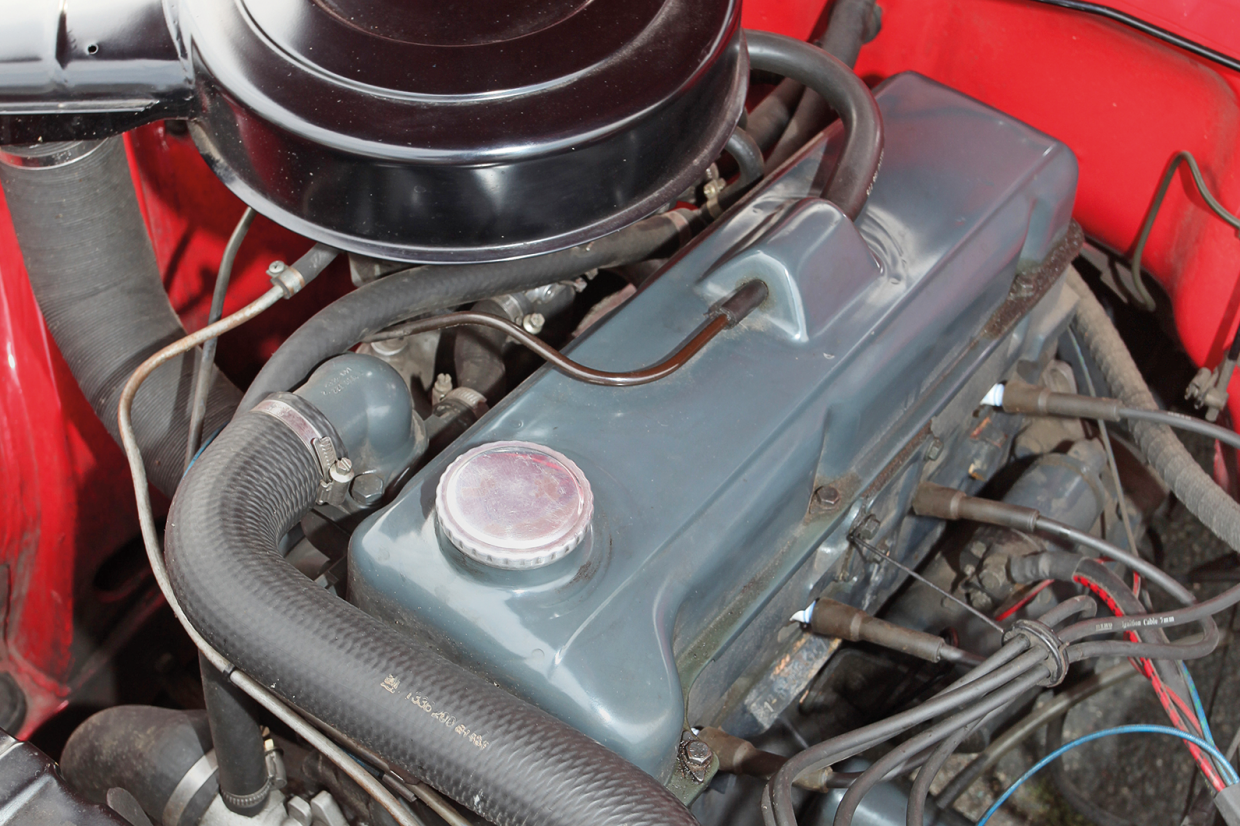 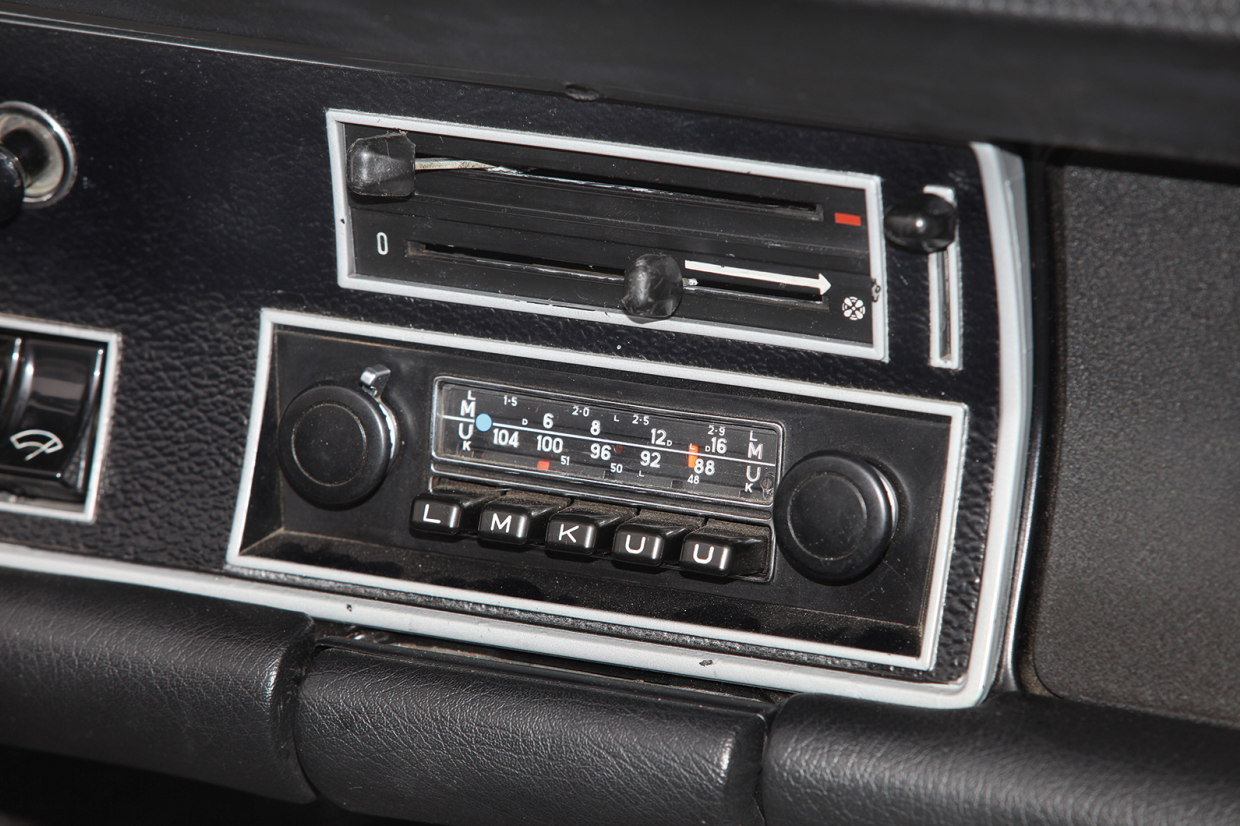 Deutsch built the last of its ragtop Opels in ’71 and then promptly stopped trading.

This 1967 example has a cheerful demeanour that gives an insight into the flavour of lesser Rekords.

It is smooth and flexible, with a prosaic exhaust note and the sort of performance that gives bystanders plenty of opportunity to admire the shape.

The Rekords and Commodores were among the first products of Opel’s Design Centre, a styling facility modelled on the GM set-up in Detroit and headed by American Clare MacKichan.

They are not great cars but are certainly very good ones that did all that was asked of them and looked good doing it. 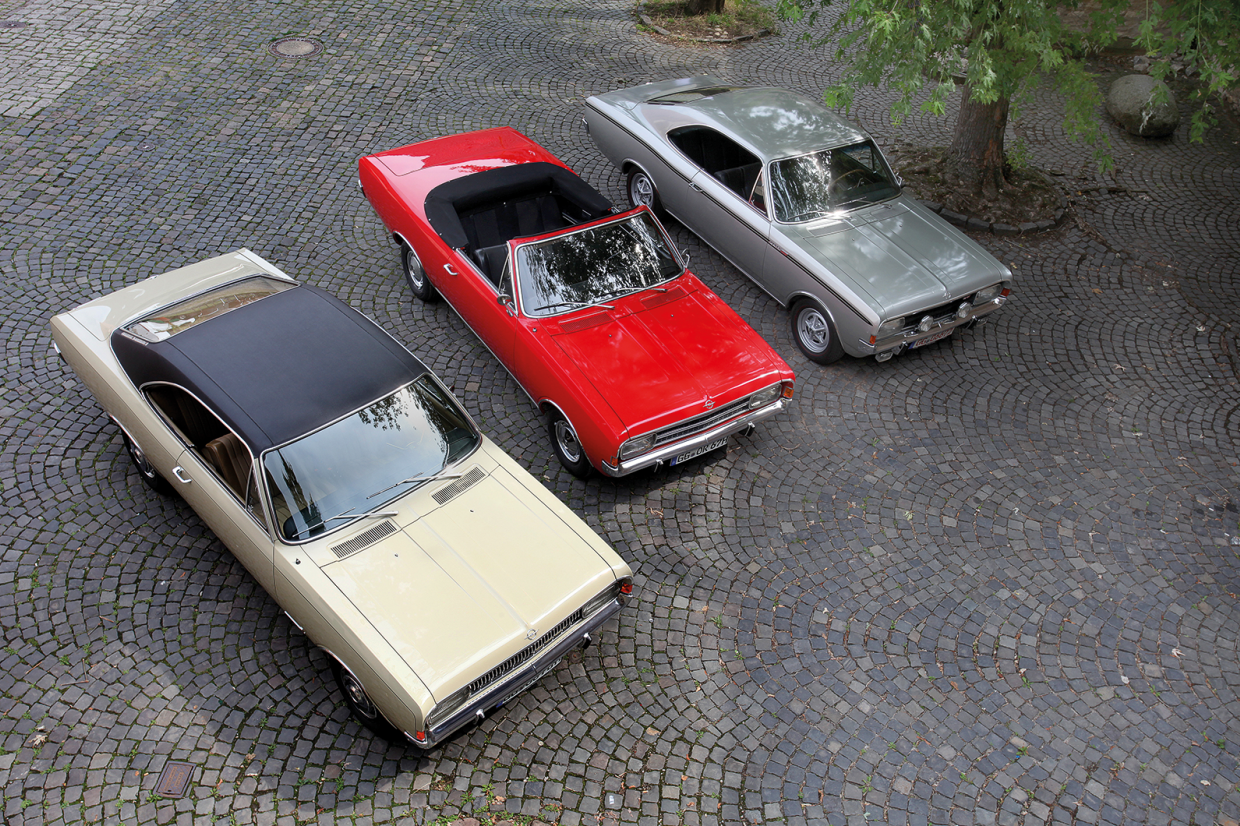 These Opels represented a perfect exercise in generic international good taste that was at home in any situation, be it as a taxi, executive express or competition car.

The famous 180bhp ‘Black Widow’ campaigned by Erich Bitter (and a youthful Niki Lauda) was based on a two-door Rekord C saloon.

Built under different marque names in South Africa (Ranger) and South America (Chevrolet Comodoro), they were familiar vehicles around the globe and probably did more than any other single design to change Opel’s previously dour image for the better in the ’60s.

Thanks to Uwe Martin and Jens Cooper of Opel 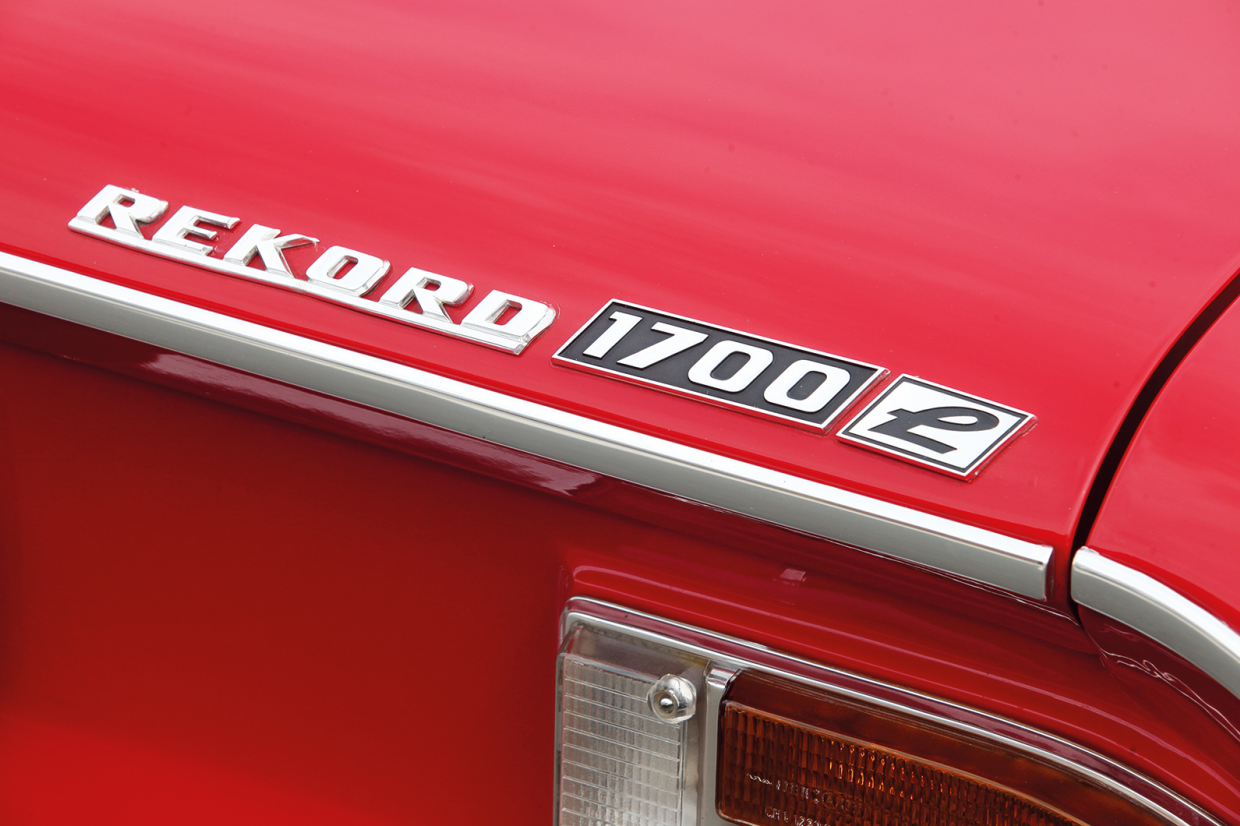 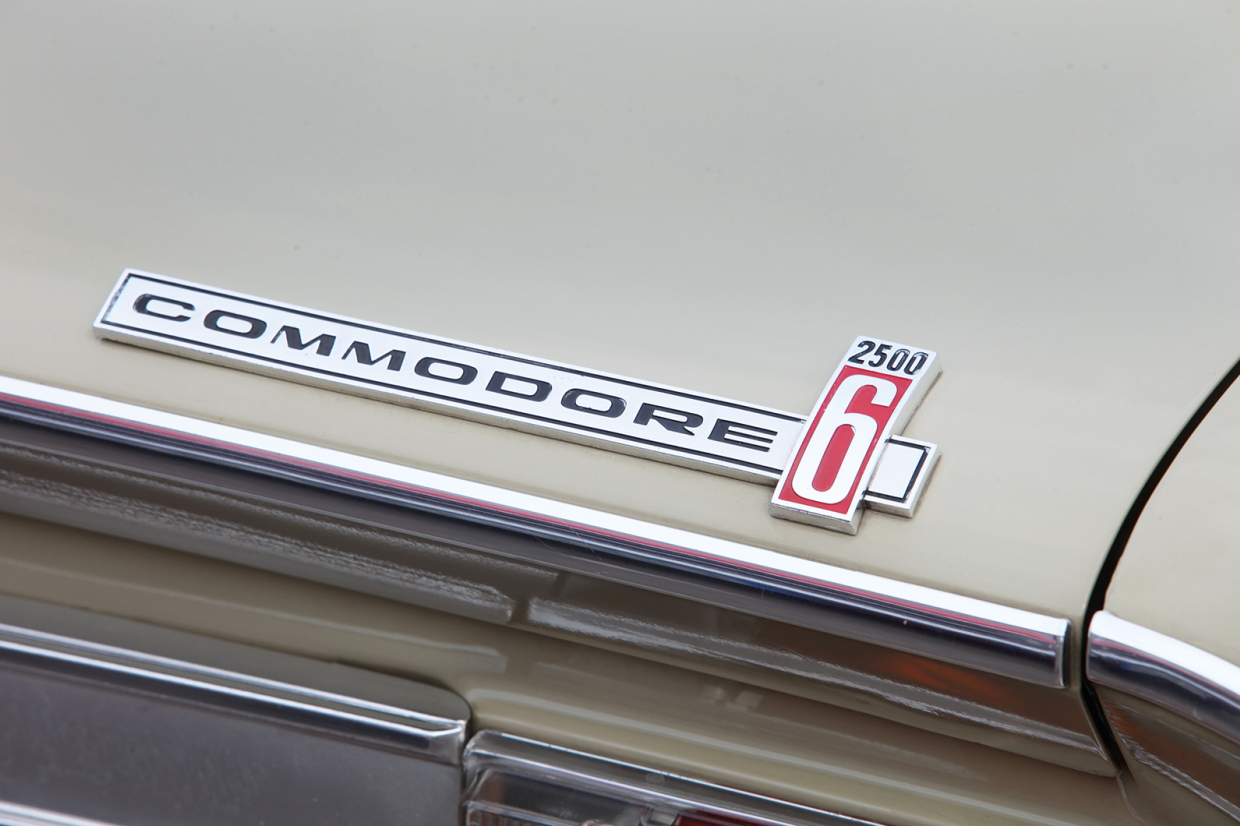 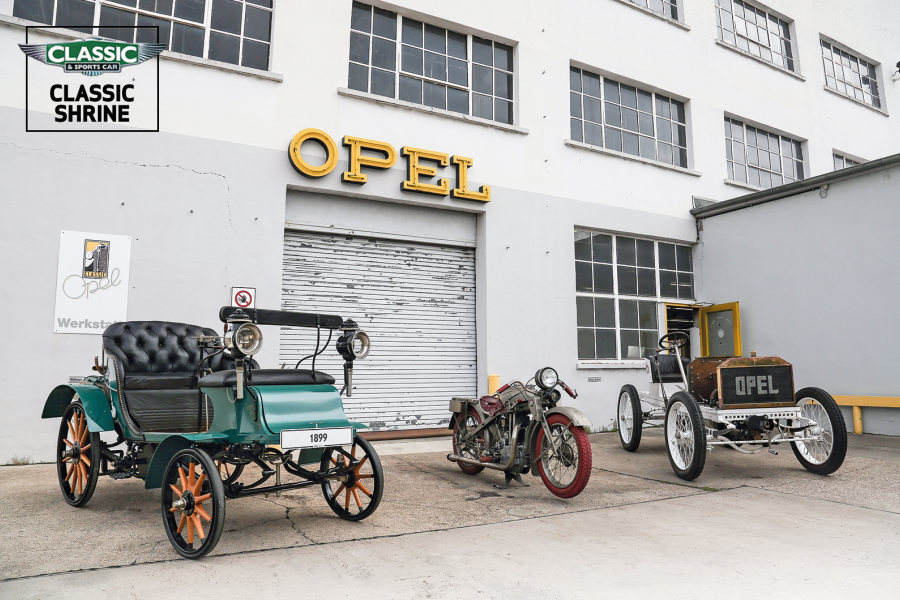