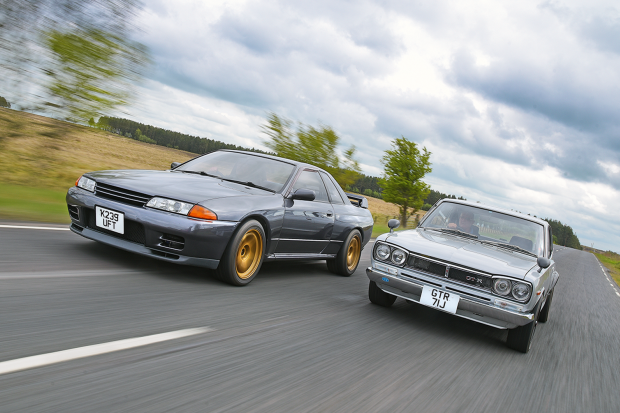 For a performance car usually namechecked in the same breath as a games console, it’s perhaps surprising that the Nissan Skyline GT-R marks its 50th anniversary in 2019.

Only 1945 of the seminal, original GT-Rs were produced, and just a handful have been privately imported into the UK, so it’s understandable if the earliest cars have made little impact beyond Japan.

Known to aficionados as Hakosuka (hako meaning box in Japanese, suka shorthand for Skyline), the first GT-R does have pedigree, racking up more than 50 Japanese touring car victories in less than three years. 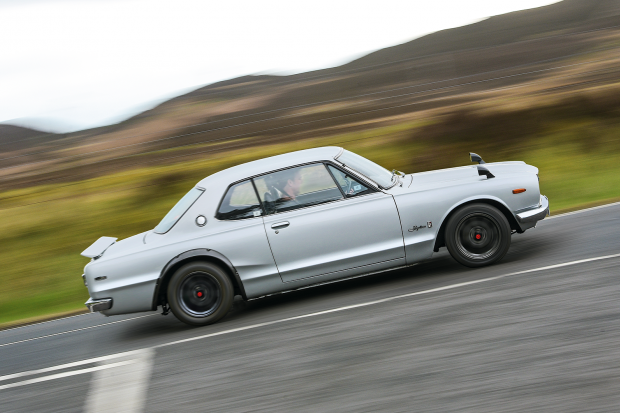 The BNR32 Skyline GT-R – or R32 for short – is more familiar to Westerners, and also celebrates a landmark birthday as it turns 30 in 2019.

Again no examples officially came to the UK, but a production run of 40,000-plus units, coupled with the grey-import boom of the late 1990s, means that you will occasionally see an R32 on British roads.

Wheels magazine dubbed the R32 ‘Godzilla’ following the Japanese import’s controversial dominance (and later ban) in Australian Touring Cars, and a starring role in the Gran Turismo series of PlayStation games, conferred the icon status that the R32 still enjoys today – the GT-R’s futuristic technology made it a perfect fit for computer simulations.

Evocative as it is in other markets, the Skyline name is merely a mainstream nameplate in Japan, much like Sierra or Mondeo.

It’s the GT-R suffix that’s key, and the story really starts with the second-generation Skyline that arrived in ’65, produced by Prince Motor Ltd.

Nissan’s subsequent merger with Prince, following government pressure for the two companies to consolidate, laid foundations for the Skyline 2000GT-R. It contested a domestic touring car programme from its launch in 1969.

The attractive coupé entered production in 1970, establishing the template for every future GT-R.

The saloon’s wheelbase was shortened by 70mm, 20kg came off its kerbweight, and a ‘K’ was added to the codename, for KPGC10. 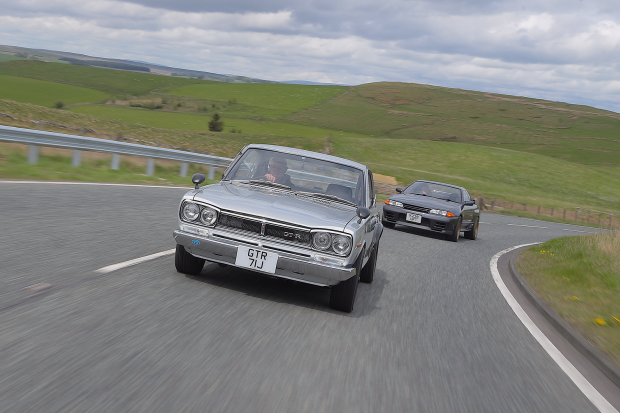 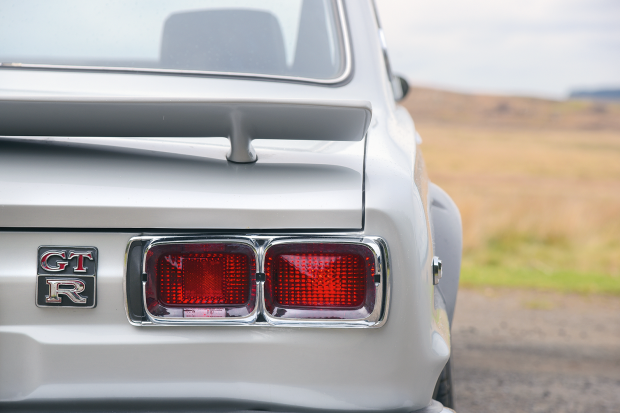 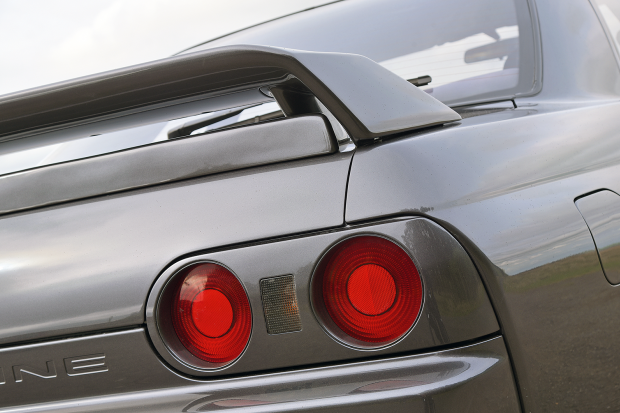 Power was rated at 158bhp through the rear wheels, helped to the ground by a limited-slip diff. Suspension was by MacPherson struts up front, semi-trailing arms at the rear.

Importer Torque GT sourced Ian Griffiths’ car from Japan a few years ago, and it’s thought to be one of only four Hakosukas in the UK.

Buyers typically pay from £130,000 for a usable car requiring some TLC, up to more than £200k for a perfect, unmodified example. 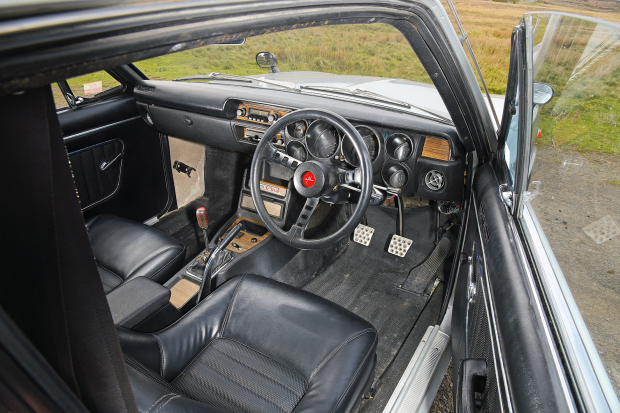 At first it’s hard to reconcile the design of the early Hakosuka and the far more futuristic R32, and you’d be forgiven for guessing there was more than two decades between them.

But you can see the echo down the ages: the strong horizontal lines, including the roof, which make both such usable two-plus-twos; the pillarless doors; the elongated bonnet and boot; and the beginnings of the signature quad rear lights in the Hakosuka.

The older car is certainly more elegant, with a kind of déjà vu Italian style. As is common, its standard steel wheels have been switched for 15in alloys, though the bolt-on wider rear arches were factory fitted.

You sit low in bucket seats, behind a vestigial strip of dashboard angled upwards at 20º or so, its wood-grain trim leavening the black plastic and vinyl upholstery.

There’s a thin three-spoke wheel and a delicate gearlever, like an unopened tulip, an easy reach away.

The unassisted steering is butch at very low speeds (exacerbated by this car’s larger rubber), but it limbers up on the move, and the steering box’s much faster ratio than a standard Skyline is designed to lend a fleet-footed responsiveness to the GT-R’s handling.

It’s an eagerness matched by a relatively light clutch, a gearshift that flicks across the gate with a precise little click, and supple suspension as standard (though most have since been lowered and stiffened). The instruments are recessed down tubes like binoculars, the redline strikingly high at 7500rpm. 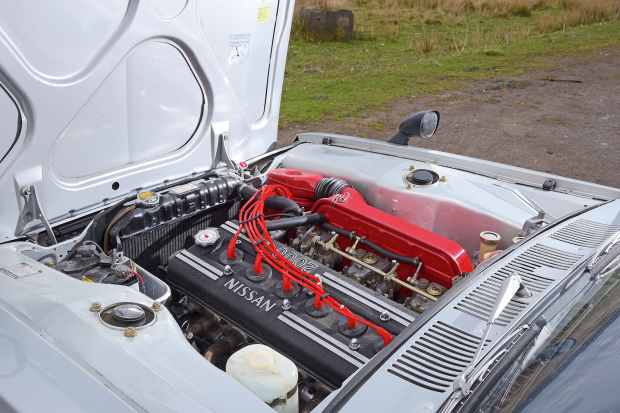 We won’t be troubling that today, however, because the engine has only recently been rebuilt by The GT-R Heritage Centre in Durham.

Boss Dave Warrener describes performance as fairly unremarkable below 3500rpm, at which point the exhaust note changes to a howl and races towards 7000rpm with real enthusiasm.

“Get a Hako on song and they still properly fly,” he grins. With the GT-R body being no different to other Skylines, it’s this extraordinary SR20 engine that accounts for the bulk of the Hakosuka’s value: tall units without ancillaries but requiring a refresh start from £50k!

There’s certainly enough performance to give the GT-R’s chassis a workout, with power winning the battle over mechanical grip. “It’s an oversteery car if you push it hard through the twisties,” confirms Warrener.

If the handling is lively, the brakes are best described as deadly, with single-piston calipers gripping discs on the front axle, drums on the rear, and a tiny master cylinder that pushes very little fluid down the brake lines. 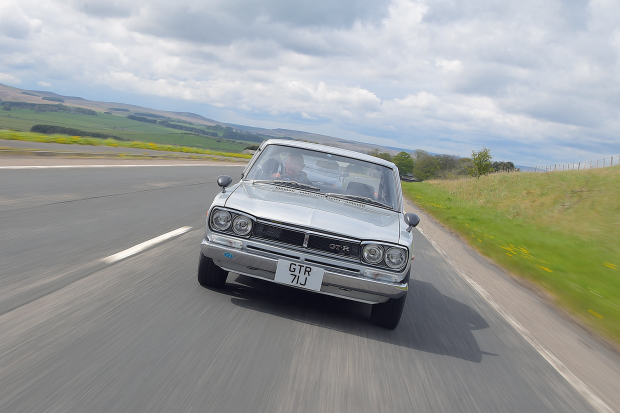 The even rarer KPGC110 was produced briefly in 1973 before the oil crisis snuffed it out, and other high-performance Skylines followed, albeit without the GT-R badge.

But nothing could have prepared the market for the technological shock of the R32 Skyline GT-R in 1989.

More brutal than beautiful, the R32 brings to mind fighter jets with its afterburner rear lights, animated Gundam robots with its angular shape.

There’s even hints of a musclebound pick-up in its silhouette, but it absolutely speaks of a country at the peak of its technological dominance.

The straight-six continues the bloodline from 1969, though this time there’s a pair of parallel turbochargers – astonishingly, Nissan produced a separate twin-turbo V6 for the 1989 300ZX – plus ATTESSA E-TS all-wheel drive and Super-Hicas rear-wheel steering, the latter two mechanical systems electronically controlled.

The R32 was a high-tech masterpiece, Nissan’s Porsche 959 at a time when the 911 turbo was an air-cooled, rear-drive anachronism. The racer dominated everywhere, from Spa to Bathurst. 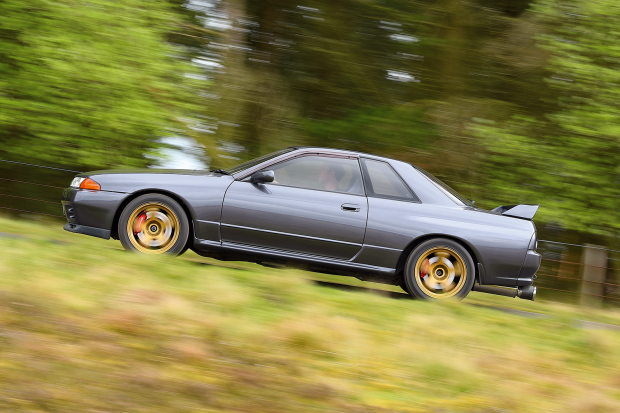 The driver’s door closes with a baggy clang and the low-grade black plastics inside betray its mass-market saloon DNA, but there’s a likeable, no-frills air to the cockpit, which instantly feels focused around driving hard.

The sports seats are low-set, gripping both torso and thighs with perfect contours and suede-effect fabric. There’s a small-diameter steering wheel (aftermarket in this car, but the standard item is a similar size), a gearlever barely a handspan away, and pedals set up by people who know how to heel-and-toe.

The RB26 ‘six’ settles to a deep, sophisticated idle that’s close in spirit to period BMWs; the clutch is friendly, the hydraulic power steering fingertip-light in the car park, the tyres scrunching over the gravel as the tight rear diff binds.

The R32 is far more nuanced and mechanical in feel than its ‘digital supercar’ reputation suggests, and confidence builds quickly.

The steering remains light at speed, the generous assistance complemented by a pacey ratio, but there’s also a progressive rate of response and weight as you ease through corners to clearly telegraph loading through the tyres and suspension. 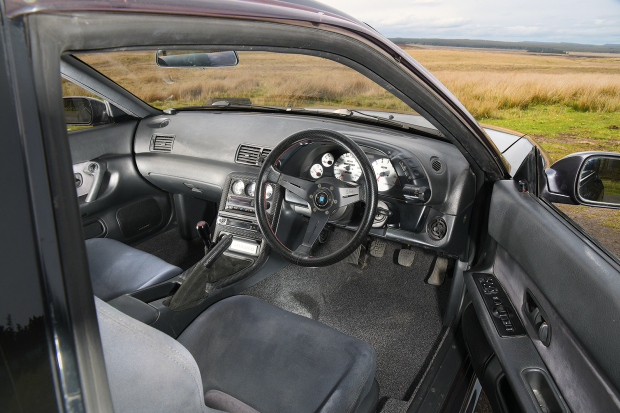 The steering doesn’t tug on cambers: the GT-R can be placed accurately, and feels out the surface with a delicacy that encourages you to hold it lightly, the better to decode the messages that tingle between thumb and index finger.

It makes the R32 feel agile and constantly in touch with the road, reassuring you that this is no hulk to hustle should you want to push harder.

The RB26 unit was rated at 276bhp from the factory, owing to a gentlemen’s agreement between the Japanese manufacturers, though the reality is usually 320bhp or so.

Like most, this car also has a few Nismo (Nissan Motorsport International) tweaks taking it up to c380bhp, which is still pretty modest given that the racers were good for 500bhp, and drag and show cars have been tuned to beyond 1000bhp.

Power delivery feels very turbocharged, if without the drawbacks you expect. Nothing dramatic occurs below 2000rpm, but a certain muscularity pervades and the straight-six purr is overlaid by a loud hiss under full acceleration as boost builds like a storm.

By 4000rpm the GT-R has hit its stride but there’s no sudden kick, it’s all incredibly progressive, the linearity partially masking an indecent rate of progress. 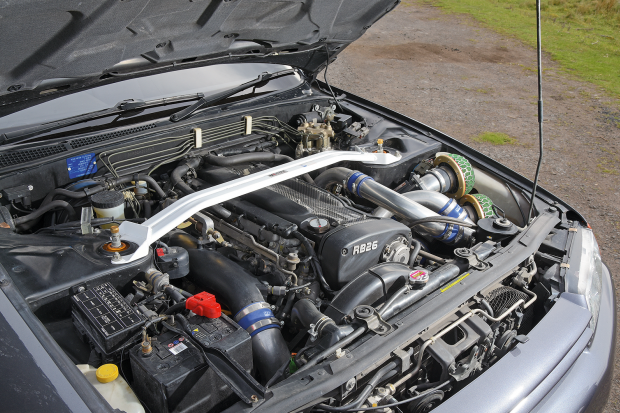 The real surprise is how urgently it continues to pull right up to the 7500rpm redline.

Change gear – with a deliciously light and precise snick – and there’s a sudden exhalation of boost pressure like the crack of a whip, then the next ratio lands you smack in the action at 5000rpm. It feels wrong not to revel in the visceral urge of it all, squeezing the slightly squishy-feeling accelerator back to the floor.

All-wheel drive ensures that the chassis isn’t overwhelmed, but far from dulls the R32’s edge. It turns in keenly, feels adjustable off-throttle (and therefore completely crashable, no matter what legend suggests), and corners with a resolutely rear-wheel-drive stance as you feel for grip under power.

The GT-R is, in fact, designed to be 100% rear-drive whenever possible. Push harder and torque bolts for the front axle as if someone’s flicked a switch, the electronically controlled torque split reacting quickly to send as much as 50% forwards.

The limits of traction are far higher than first impressions suggest, but it’s always with a hint of oversteer in the Skyline, rather than the understeer of an Audi quattro. 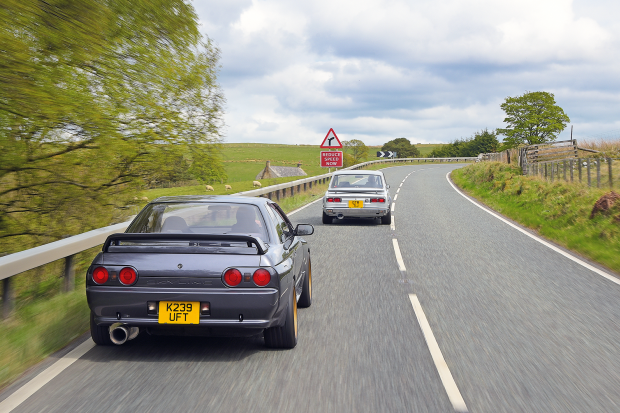 In this recently restored example, those limits are even higher courtesy of 17in Nismo alloys (an inch larger than standard) and huge Brembo brakes taken from the later R33 GT-R that give a keen pedal feel and robust stopping power.

It’s a potent combination, one that still feels quick and capable today, never mind 30 years ago.

No wonder values are on the up. Warrener reports that R32s could be had for £6-8000 only a couple of years ago, but today even a car in need of restoration will only just dip below £20k, and those in the mid-to-high 20s bracket typically still need light work. You’ll pay £60-£100k for the most desirable Nismo versions.

Five decades since the birth of the GT-R, it seems that Nissan’s high-performance spaceship has finally come of age.

Thanks to The GT-R Heritage Centre and Torque GT

19 undervalued classics from the 1990s

Ben Barry is a contributor to Classic & Sports Car 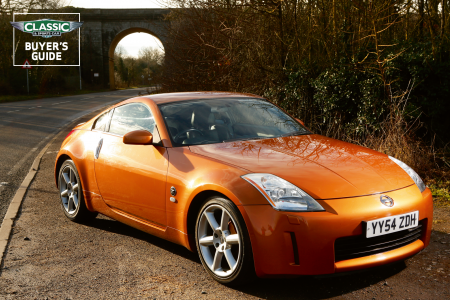