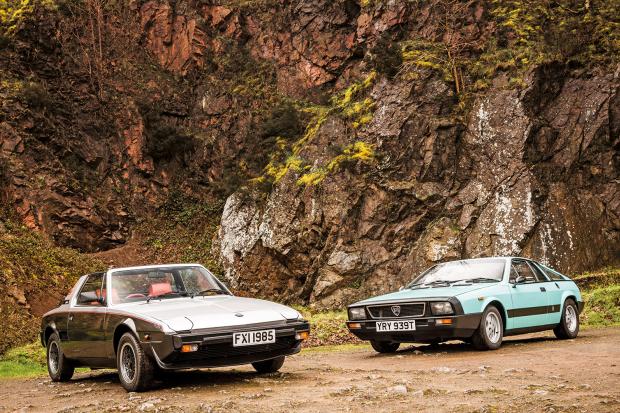 The Fiat X1/9 and Lancia Beta Monte-Carlo (née X1/8) should have been bosom buddies, but fate had other plans...

The 1970s are often regarded as the culprit responsible for the demise of the affordable sports car.

This may be true of Britain’s mass-produced roadsters – which failed to follow the lead of low-volume specialists such as Lotus – but not so of Europe’s other great sports car nation, Italy.

Originally designed to replace Fiat’s 850 Spider and 124 Coupé, these sportsters turned away from familiar drivetrain layouts and opted for the very latest in chassis configuration.

Inspired by Formula One, and the subsequent 1960s upheaval in sports car racing, the Fiat X1/9 and Lancia Beta Monte-Carlo were among the first to democratise the sleek sensuousness of the mid-engined sports car.

Their gestations, though, are as straightforward as a redneck’s bloodline. Although both started life as neighbours in Fiat’s prototype register – the Lancia was initially designated X1/8 (becoming the X1/20 in 1972), while the X1/9 kept its name for production – a lot happened between the initial styling doodle and showroom reality. 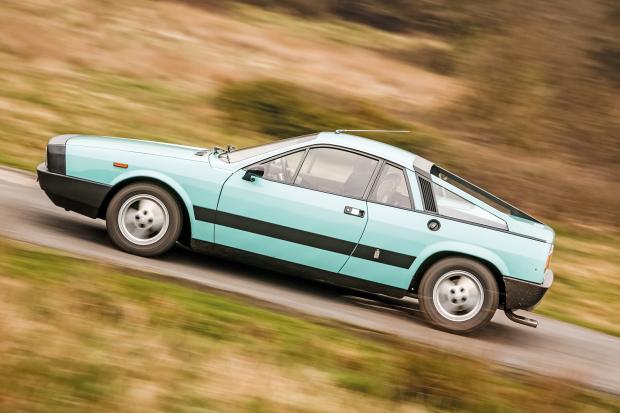 The X1/20’s development started in 1970. Intended as a mid-engined, rear-wheel-drive Fiat styled by Pininfarina, it would be the first car that the carrozzeria conceived and built from scratch.

Powered by a unit derived from the Fiat 130’s V6, one of the two prototypes was entered on the 1974 Giro d’Italia to whip up publicity. Named the Abarth 030 Pininfarina and entered as the Abarth SE030, this 2000lb machine boasted 3.5 litres and a whopping 285bhp.

The SE030 finished second in the Giro, but the project was cancelled. Crucially, it had been beaten by a Lancia Stratos so, taking into account this Fiat SpA conflict and increasingly common energy crises, it was decided that the new X1/20 would be a four-cylinder. 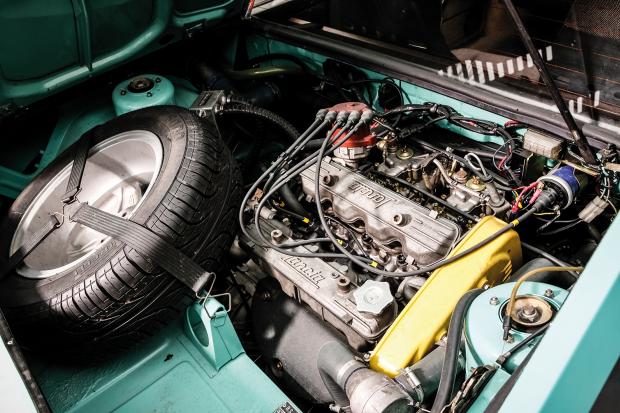 The X1/20 was launched a year behind schedule as the Lancia Beta Monte-Carlo in 1975. Available as either a coupé or targa-topped spider, it filled the hole in Lancia’s range that had existed since the Fulvia Coupé and Sport had ceased production.

The X1/20’s Lancia defection also addressed the issue of its expensive manufacture – as a premium badge, Lancias were priced above mass-market Fiats.

The Monte-Carlo was powered by the Beta’s Aurelio Lampredi-designed 118bhp 2-litre twin-cam ‘four’ and equipped with a five-speed gearbox, independent suspension and disc brakes. So while this Paolo Martin-styled model was more economical than its V6-engined predecessor, it packed plenty of poke and fizz. 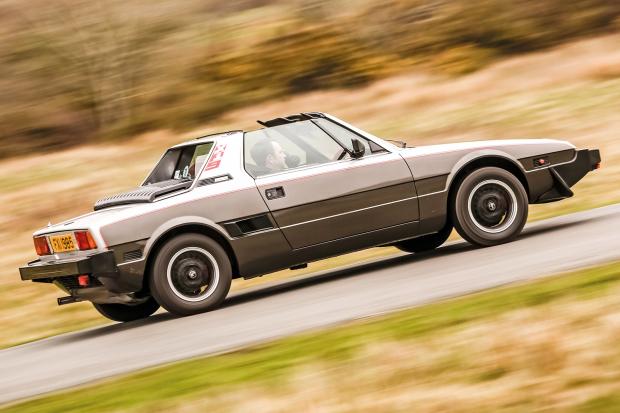 What it lacks in power, the Fiat more than makes up in cornering and braking ability

The origins of the X1/9, meanwhile, were sired by another member of the growing Fiat SpA family: Autobianchi.

This company had been acquired in 1968 and, at the ’69 Salone dell’Automobile di Torino, had unveiled an ultra-modern two-seater concept called the Runabout.

Part Gerry Anderson prop, part powerboat on wheels, this futuristic sliver of whimsy came from Bertone and father of the wedge Marcello Gandini. Compared with the fantastical Runabout, though, the diminutive production X1/9 gained roadworthy niceties and a trimmer, tauter appearance.

Sitting in the class below the Monte-Carlo, the equally mid-engined, all-independently sprung X1/9 was powered by a transverse drivetrain derived from the Fiat 128-based, front-drive Autobianchi A112. 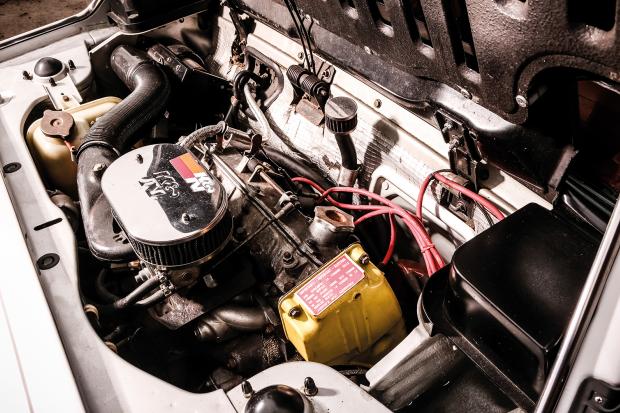 Another Lampredi design, this 1290cc sohc ‘four’ was in similar single, twin-choke Weber form to the 128 Coupé unit, producing 75bhp with 73lb ft at 3400rpm. The X1/9 had a taller fourth gear to exploit its better aerodynamics. Its launch was planned for the 1972 Salone dell’Automobile di Torino, but it was postponed so that it wouldn’t steal the limelight from the 132.

Abarth turned to the X1/9 as a rally car to replace the 124. Again, like the SE030, the prototypes showed considerable promise, winning three events (the Alpi Orientali, Coppa Trabucchi and the Laburna Rally), but after one season and before the car gained Gp4 homologation, the project was axed in favour of the 131. 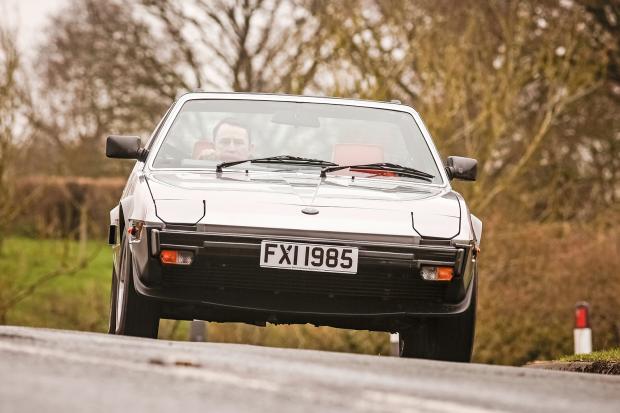 The X1/9's steering is sublime

To the chagrin of enthusiasts, neither the Lampredi twin-cam nor the 1985 Uno Turbo ie engine would officially be offered. A few years later, in 1982, Bertone took over building the X1/9 following Fiat’s decision to discontinue production.

Compare an X1/9 with something like a Triumph Spitfire and it’s little wonder that Fiat’s small sports car earned the nickname ‘Baby Ferrari’. Its mechanical spec and bold, invigorating style reduced Canley’s seasoned campaigner to the status of a four-wheeled Corporal Jones.

Yet during our photoshoot, between the rain showers and all the cleaning, it is Pininfarina’s work rather than Bertone’s that attracts more admiring onlookers. We’re in the Malvern Hills, not a million miles away from a certain renowned manufacturer of sports cars that refuses to acknowledge age. 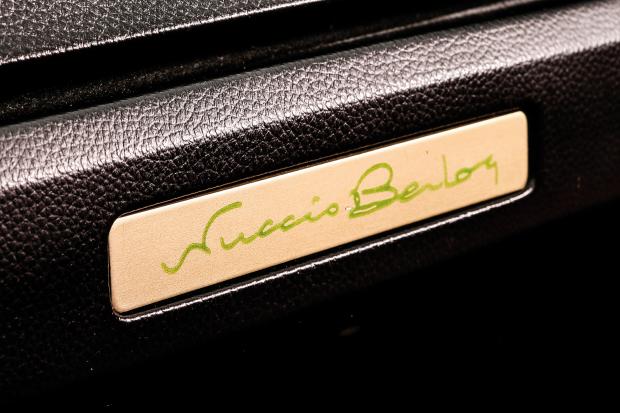 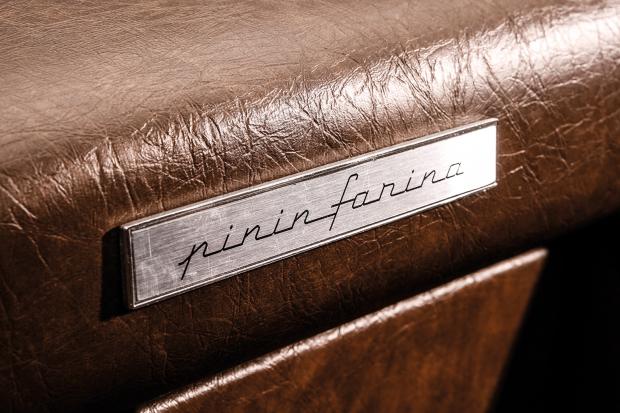 Nuccio Bertone nameplate in the Fiat (left), Pininfarina in the Lancia

Sadly, the same cannot be said for our test route – for although it is familiar, it has not aged well. Cut into a hillside, the brown, slimy, snaking roads are heavily potholed, and where you might expect a wall or barrier, there isn’t any form of defence against trees and gravity. Not unless you count the foreboding sight of fluttering police accident tape.

Thankfully, both of our owners have braved filthy weather with their wonderfully original, low-mileage cars. Starting in chronological order, Chris Clarke’s 1978 S1 Lancia Beta Monte-Carlo is one of only six UK cars to have been painted in splendidly bright Verde Beta.

“It was really good when I got it, but I wanted to make the engine bay immaculate, so I removed the engine and had it resprayed and detailed it to make it look nice. I’ve only had the two sides resprayed and that was because the sills had gone at the front – they were never going to blend new and 40-year-old paint.” 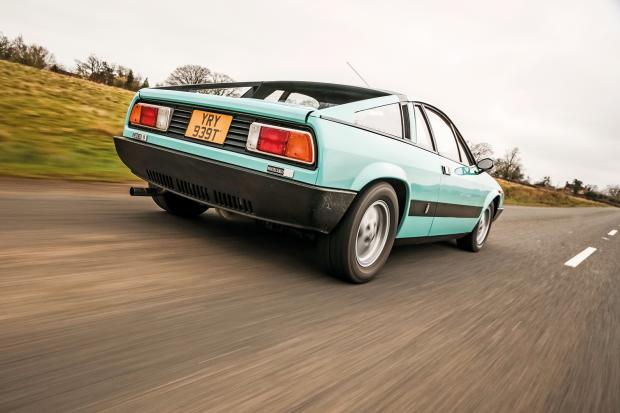 The brakes need a bit of thought before applying, but the Lancia is a fine choice for threading along a twisty B-road

So what is it that draws him to the Monte-Carlo? “It is the shape and the styling that really appeal to me. The first one I had was a Beta Spider, and it just sparked off a devotion to the marque, really – particularly the Beta family.

“Monte-Carlos are great to drive, though people always say the brakes are bad – especially the S1 – but I’ve disconnected the servo and upgraded the brakes to Tarox. As long as you behave yourself and leave a reasonable distance, it’s fine.”

Between February 1978 and March 1980 production of the Beta Monte-Carlo took a sabbatical to address the front brakes locking up due to excessive servo assistance. Post-1980 S2 Montecarlos lost the hyphen – and the ‘Beta’ nametag, the 13in Pininfarina alloys, the brake servo and the front anti-roll bar – while gaining larger, 14in Beta-style alloys to fit over larger front calipers, plus engine tweaks, quarterlight-mounted mirrors and Lancia’s family grille.

Only the very early cars had solid rear buttresses, so this Monte-Carlo’s interior is roomy and airy, if somewhat oatmeal-hued and tweedy. The dash – with its biscuit-coloured padding, Pininfarina badge and Jaeger clocks – is user-friendly and errs on the conservative. The small pedals are offset to the left but the footwell is fine for slender shoes – and the driving position is comfortable, with plenty of legroom. 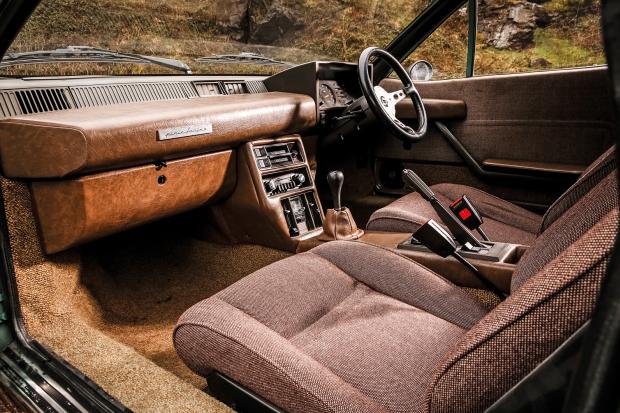 The Lancia has a very ’70s cabin

The interior of Steve Farrall’s snazzy two-tone 1985 Bertone X1/9 VS, meanwhile, is anything but shy and retiring, thanks to its red leather, funkadelic door-trim and anti-clockwise Veglia tacho.

Room is more restricted in here – be it the cabin’s width or that of the footwell, the narrow pedal box or rationed legroom inches – so Steve relishes any chance to enjoy roofless motoring.

“This is my third one on the road,” says Steve. “I just love the shape, the styling and its cleverness [the roof is stored in the front boot]. I went around Scotland in it a couple of years ago and we did 1500 miles. It’s surprising how much you can get in them and they’re very comfortable. They’re pretty lively to drive – they’re not fast but the cornering is great. I’ve loved them since I was a young lad.

“This Versione Speciale has 35,000 miles on the clock – it’s had a mother and daughter as owners. The mum bought it new in 1985, ran it for a few years and bought the Northern Ireland numberplate for it. She became ill in 2000, when she passed it on to her daughter, who didn’t really drive it – but she kept it road-legal for the following nine years. She only covered a mile a year in it, to and from the MoT test station!

“When I bought it, the car had only 24,000 miles on it. I’ve still got the original bill of sale and every single MoT certificate. Apart from the different wheels, K&N filter, electronic ignition and electric fuel pump, it’s largely original. It’s had new lower panels fitted – lower rear quarter panels and the doors replaced – but it hasn’t had any welding done underneath.” 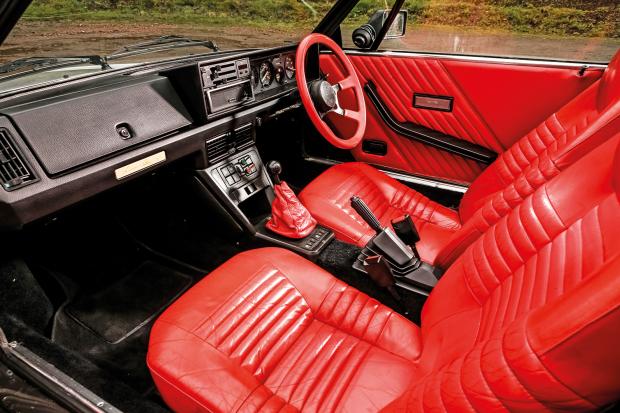 The Fiat's red leather trim isn't for the shy and retiring

You would expect great similarities when comparing two mid-engined stepsisters, and you’d be right. Both have 8000rpm tachos that turn amber then red in the 6000s and are housed within rectangular binnacles.

At 4000rpm, the Lancia’s twin-cam starts to really pull and get into its stride. Alas, what was subsequently found to be a dodgy coil connection is stopping sorties higher up the rev range, which is a shame given how these engines love to perform.

The Lancia’s gearchange is marginally quicker, narrower of gate and stiffer in action; ratios are changed with a sharp jab of the fist.

The lack of brake servo does mean that the approach to corners and general anticipation has to be honed to almost psychic levels, because the brake pedal is long of travel and short on action. 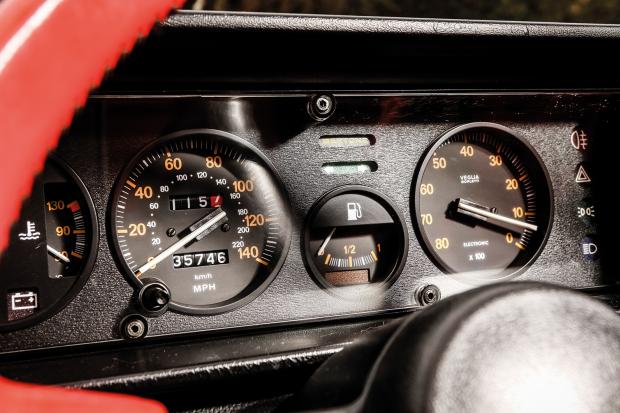 The ride is firm, but the Lancia flows through corners with minimal fuss and is forthcoming about where its dynamic limitations lie. Aside from the brakes, the Monte-Carlo isn’t just a friendly thing, it’s a rarity – an early, mid-engined machine that won’t try to spit you into the scenery with an evil glint in its headlamps.

As its smaller dimensions would suggest, the Fiat feels lighter and more nimble – something that is underlined by its steering, which matches the Lancia’s for feel and deliciousness of weight, yet it is quicker-geared.

The single twin-choke sohc motor revs freely around the clock with a merry hum, but you do get the sense that the X1/9 is not so ultimately communicative or as forgiving as the Lancia when its low moment of polar inertia decides to bare its teeth.

However, the Fiat counters with a better ride and brakes, which allow you to buzz through unexplored bends without pessimism about stopping distances curdling the experience. 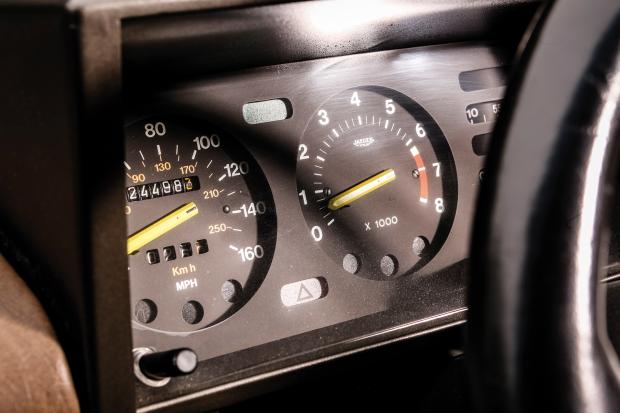 The Lancia's dials sit within a very square housing

There isn’t a clear winner here. A few niggles – of the mechanical, geographical and meteorological varieties – mean that ultimate limits remain untouched and out of view.

Yes, the Monte-Carlo has more presence and menace compared with the slight X1/9 – and until they perfect a shrinking potion, it is only the lack of interior room that prevents me from picking the effervescent Fiat.

Ultimately, though, comparing these two Italians with their different yet complementary characters is almost like comparing golf with gravy because they start with the same letter.

The Lancia, as a faster, more polished and roomy GT, is the more able ground-coverer; while the more intense, concentrated Fiat makes more of the ground it covers.