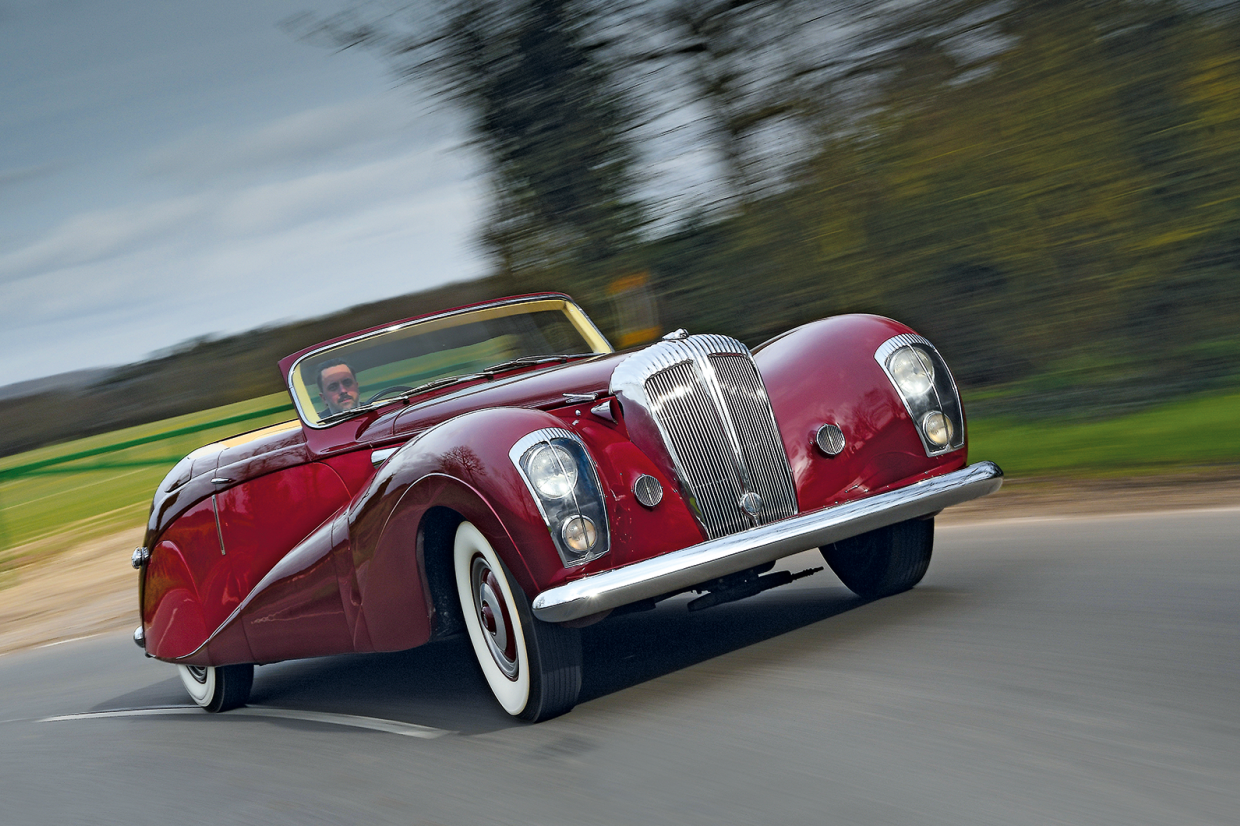 The epic scale of this outrageous Daimler will always draw crowds but seldom, I fear, buyers.

After all, what exactly can you do with a near 20ft-long, 6000lb, six-and-a-half-foot-wide convertible with a 50ft turning circle?

A misplaced statement of optimism from a grand old English marque struggling to find its way in the post-war world, the seven ‘Green Goddess’ DE36 straight-eights invite comparison with Bugatti’s Royale in the white-elephant stakes.

Only five are known to survive: this car, chassis 51724, was the second built. 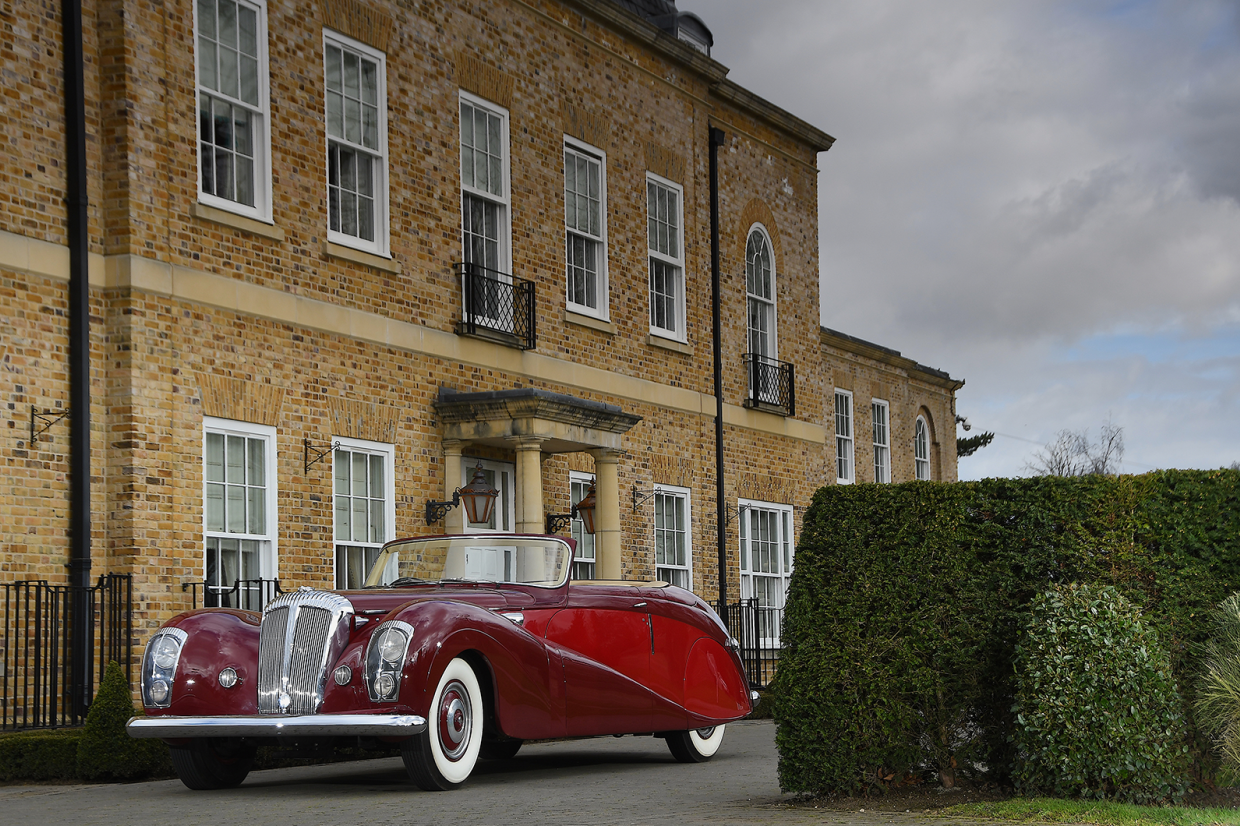 The first Hooper Drophead Coupé, the true Green Goddess, got Daimler all the publicity it could handle, its turquoise coachwork earning it the famous moniker.

The British press dubbed it ‘Chariot to the Sun’, the perfect car in which to escape the restrictions and privations of post-war Britain to the warmer, less austere playgrounds of Europe.

Although you wouldn’t have got far on your monthly 10 gallons of rationed pool petrol in this 12mpg monster. 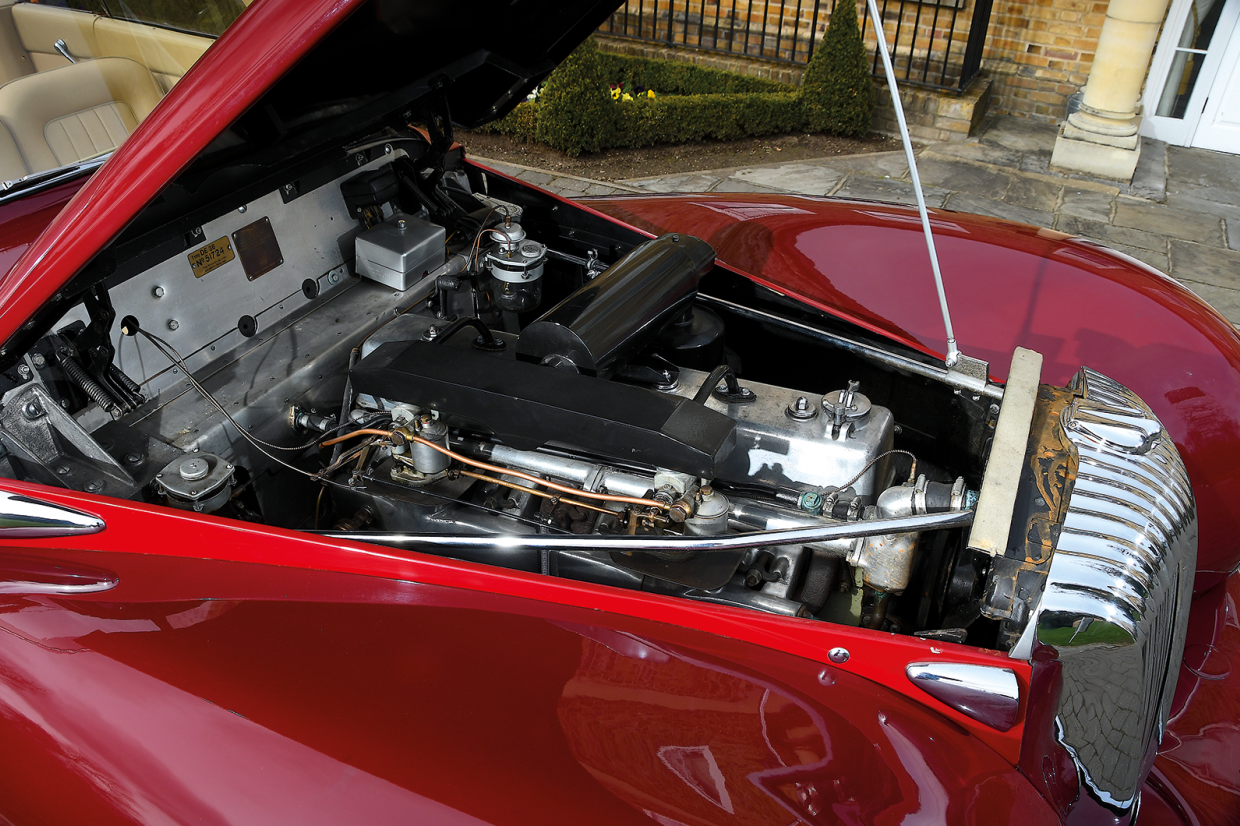 Yet as a statement motor car for those who could afford to buy and run such a thing it should have been unbeatable, the perfect ride for a late-’40s heartthrob such as Stewart Granger to squire around town in.

Or maybe Diana Dors; after all, she famously owned a Saoutchik Delahaye.

In the end, the big Daimler’s closest brush with big-screen glamour was a cameo role in the 1953 Norman Wisdom comedy Trouble in Store.

At £7001 (£250,000 or so today) the prototype, built for Daimler chairman Sir Bernard Docker, was the most costly vehicle at the 1948 Earls Court show and probably the most expensive car on sale anywhere in the world. 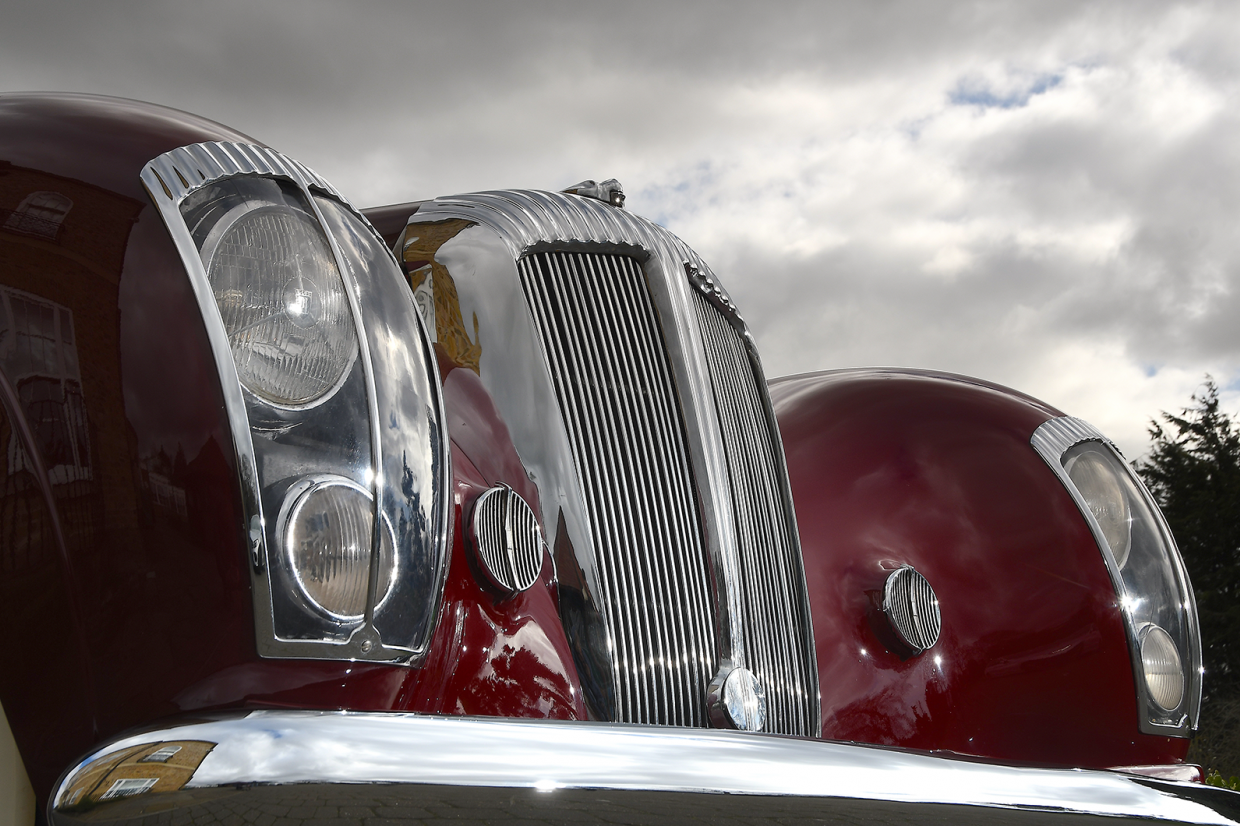 Tellingly, Daimler’s chassis, with its hypoid rear axle, independent front suspension and Girling hydro-mechanical drum brakes, accounted for only 29% of the cost.

The remainder was split equally between Hooper’s invoice for the bodywork and the government Purchase Tax on luxury goods.

From a conservative manufacturer best known for its royal limousines, the Green Goddess was a shocking change of direction, though not without precedent for those whose recollections went back to the early 1930s and the raffish Double Six Sports. 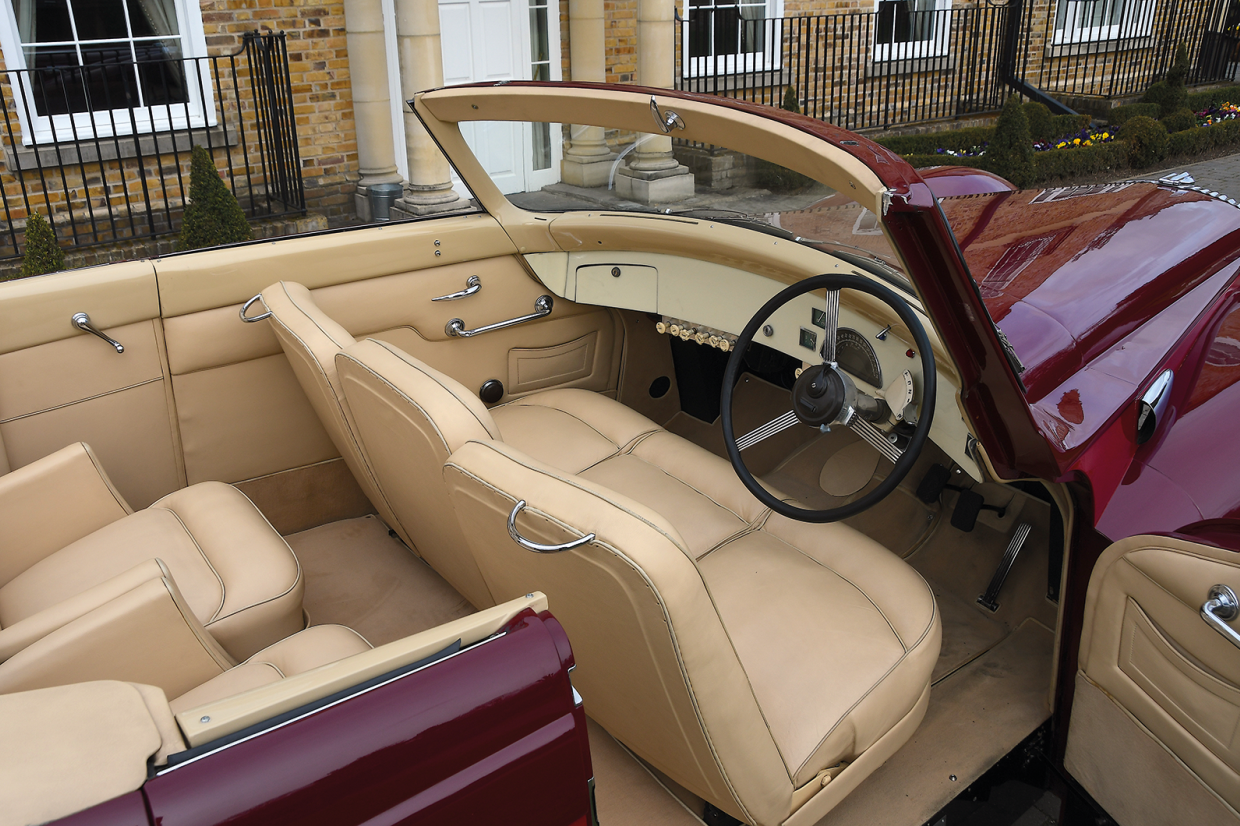 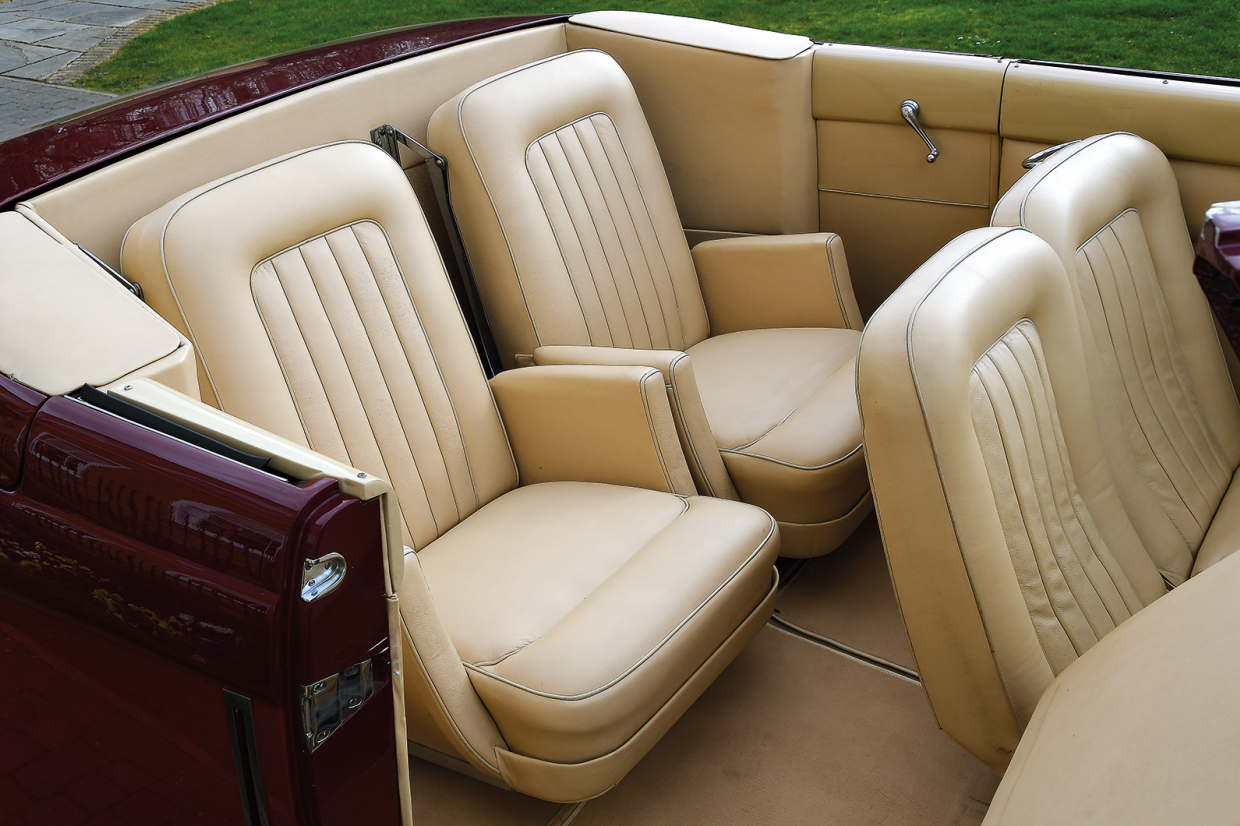 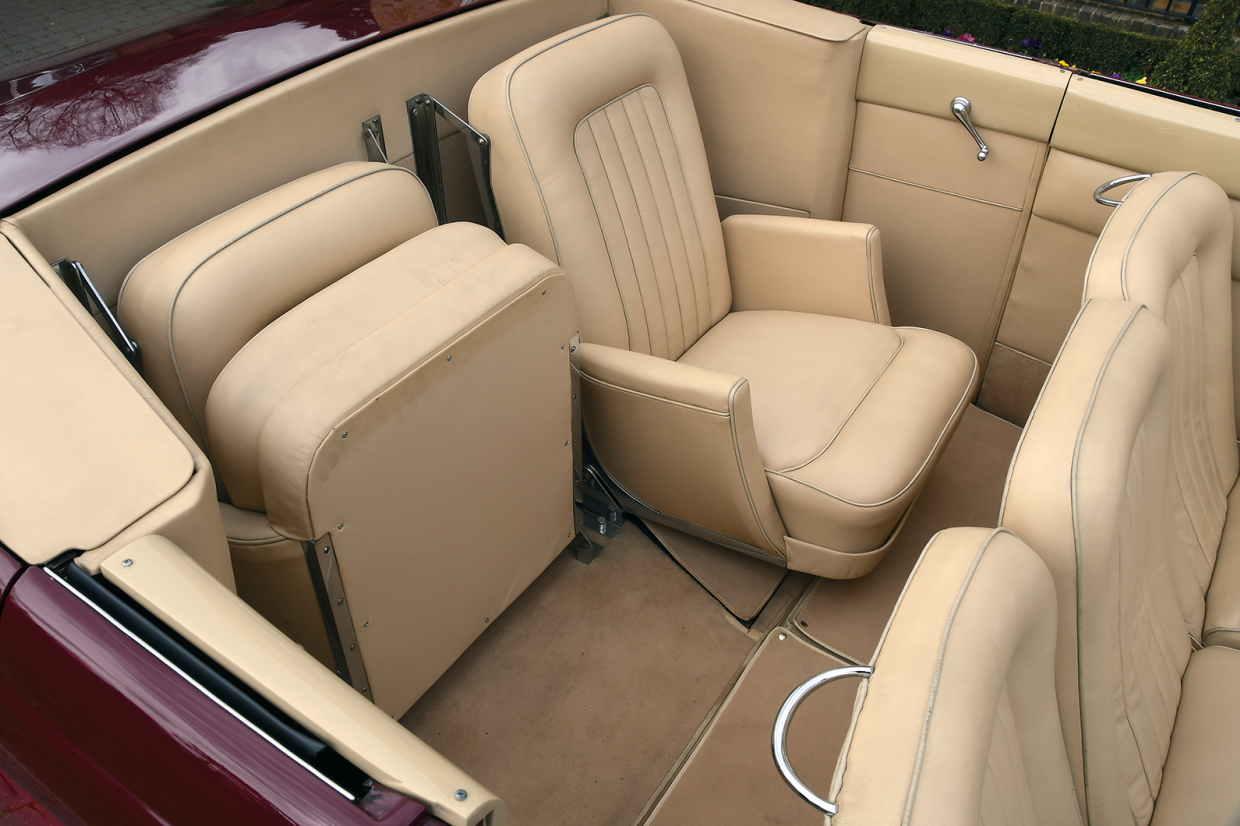 The fact that the Goddess was powered by a 5.4-litre straight-eight (Britain’s last production ‘eight’) seems almost incidental, although it must have needed every one of its 150bhp to push this three-ton five-seater along at the claimed 90mph.

Daimler had built its first in-line eight in 1933, but this post-war edition had an easier to service detachable cylinder head.

What stopped showgoers in their tracks was not these technical niceties but the sheer grandeur of the thing.

Built around Daimler’s largest 12ft 3in-wheelbase DE36 chassis, it was constructed on a scale that appeared out of proportion to its surroundings, with a length of bonnet that promised to turn up half a minute before the rest of the car. 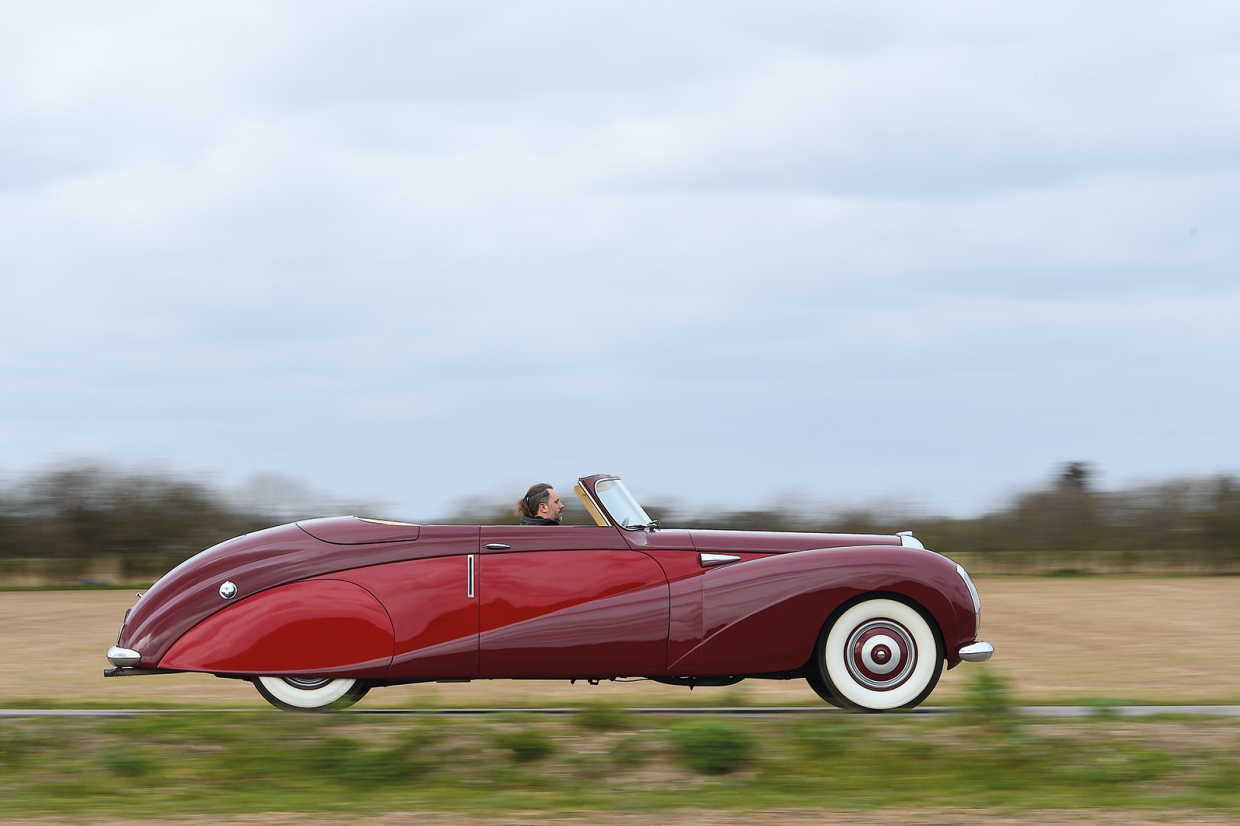 Featuring a futuristic Triplex curved windscreen – with three wipers! – and stacked Lucas lights behind newfangled Perspex fairings, each topped by a Daimler ‘crinkle’, it must have seemed impossibly alluring and unapproachable.

Its hood and windows were power-operated, there were built-in hydraulic jacks, and the chrome-plated toolkit included hand-washing facilities.

The Goddess was not a Docker Daimler in the gold-plated, Zebra-skin-trimmed meaning of the term that got this glamour couple into so much trouble. 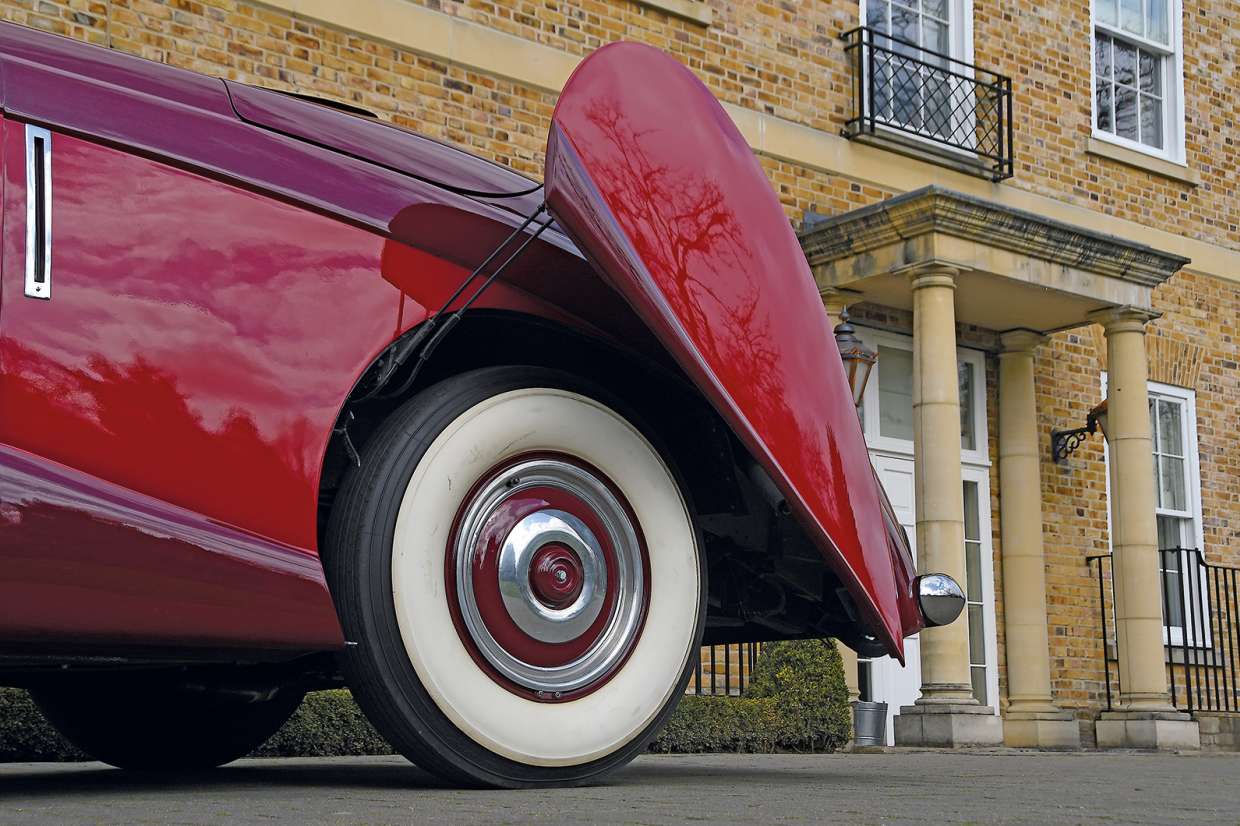 Hooper’s Mr Osmond Rivers had created ‘The Chairman’s Car’ as a vehicle to complement the famous Docker gin-palace yacht, Shemera.

This vessel was later dismissed by potential suitor Henry Ford II as being too expensive to run, so we can assume Sir Bernard lived in grand style way before Naughty Norah turned up.

The Green Goddess pre-dates their 1949 nuptials, anyway, although she would certainly have spent time in the car, mostly in the south of France; her crocodile-skin luggage was famously sprayed with hydraulic fluid when one of the pipes for the hood burst.

Hooper worked flat-out to get the first Goddess, with its English ash frame and hand-beaten aluminium panels, ready for Earls Court in October ’48. 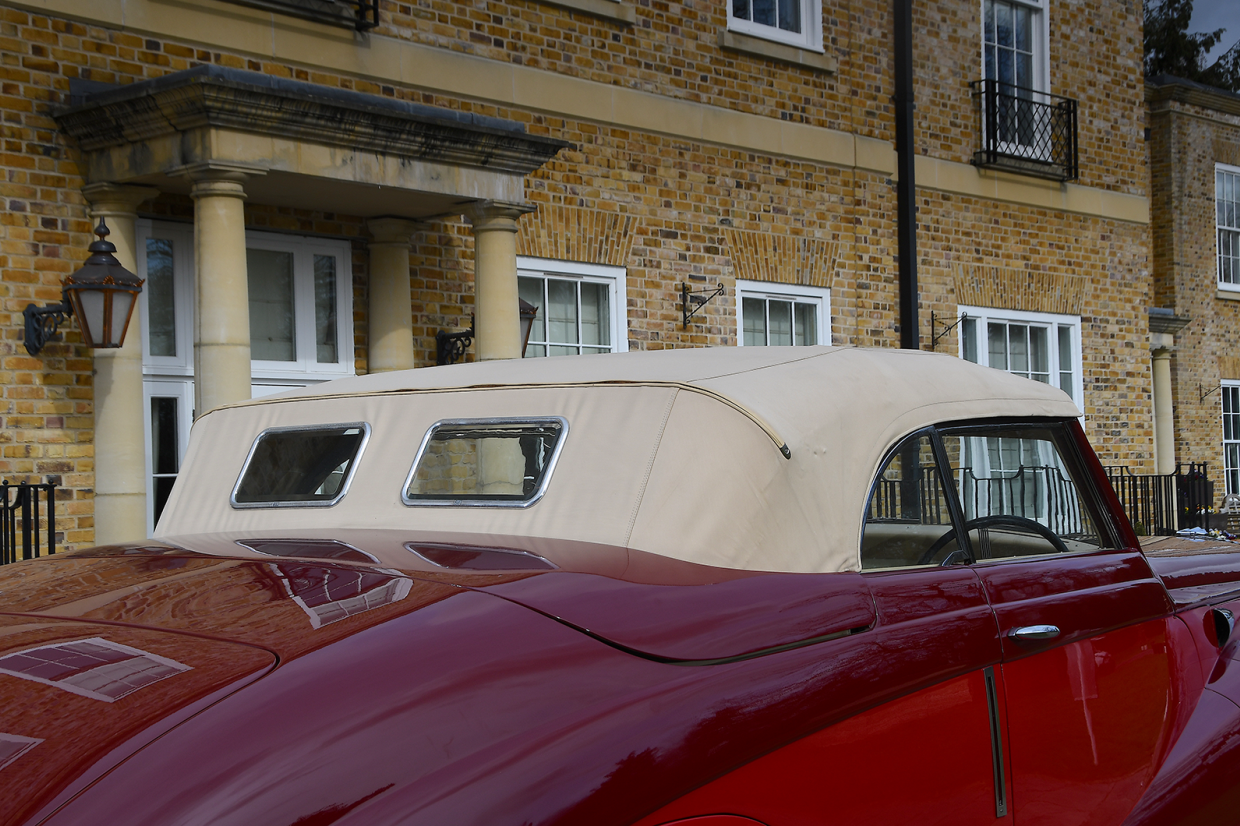 It subsequently required months of modifications before being sent out to meet Sir Bernard and his yacht for a tour of Europe.

It was then the Dockers’ personal car for some years before being returned to Hooper to be ‘rebodied’ in 1953 and sold off as an ‘as-new’ car.

Given that it was written in the company books as a ‘demonstration car’, this may have been to get around some kind of tax implications.

It seems it was not rebodied but simply modified, acquiring a conventional exposed headlamp treatment used on all but three of the Hooper DE36 dropheads.

It kept its LJJ 11 number and was last heard of at the Quail Lodge sale in 2009. It is currently thought to reside in Massachusetts. 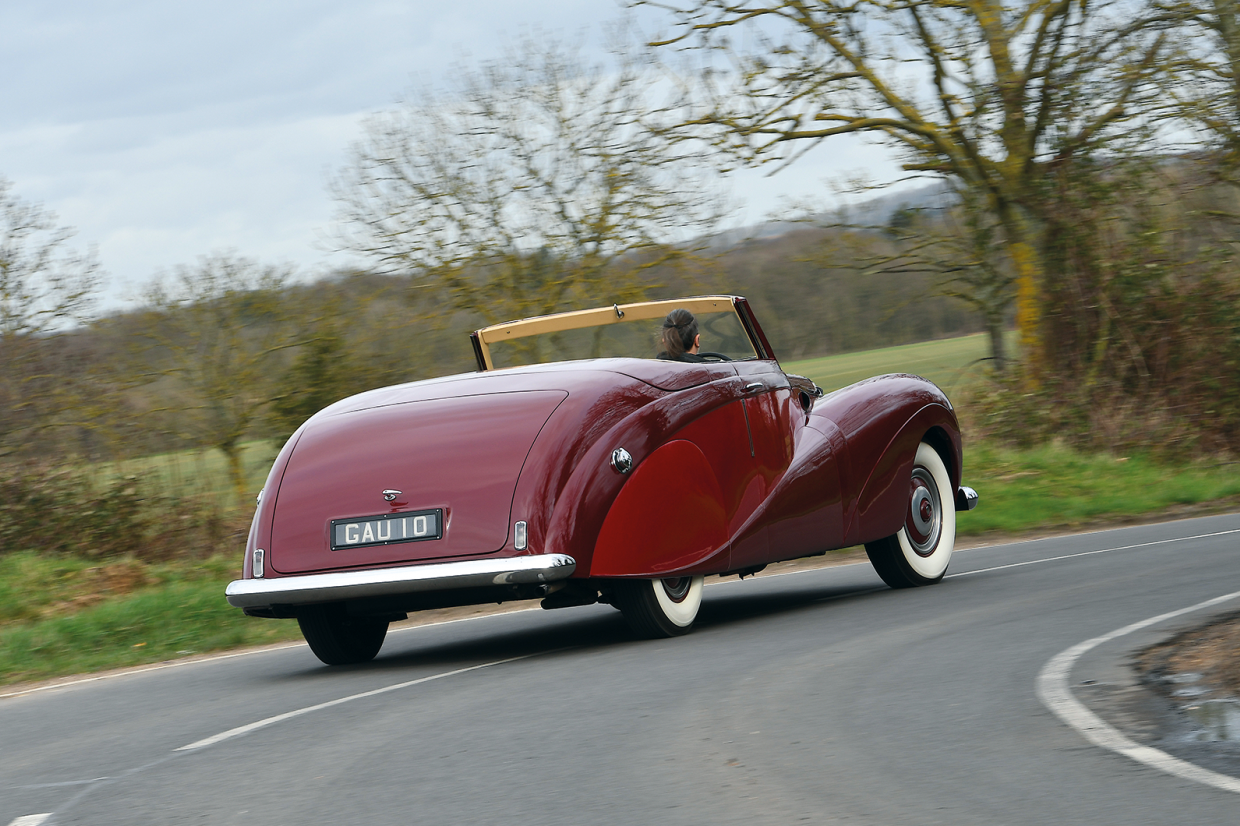 ‘Our’ Goddess is the second, built on chassis 51724 for ‘F Nield’ according to the Hooper records.

This chap was Frederick Nield of contractor Thomas Nield & Son Ltd of Gatley, near Manchester, and his order was taken in late 1948, the car ready for dispatch the following May.

Nield had already bought two Hooper Wraiths and was a keen customer of Jack Barclay Ltd.

Three UK owners later, and by 1979 this car was residing in suburban Windsor with a Mr Cullingham.

In 2000, registered GAU 10, it was sold to an American who commissioned a restoration in the Czech Republic that took an epic 14 years.

Chris Kishtoo of Vintage & Prestige, where the Goddess has been on sale since 2018, has done his homework on the early history: “There is a handwritten note in the Hooper archives that says ‘2nd built of seven – built for King Farouk – Never took delivery. Sold to England F. Nield 51949’.

“The King of Afghanistan had also ordered a limousine at the same time, which was the next chassis number.” 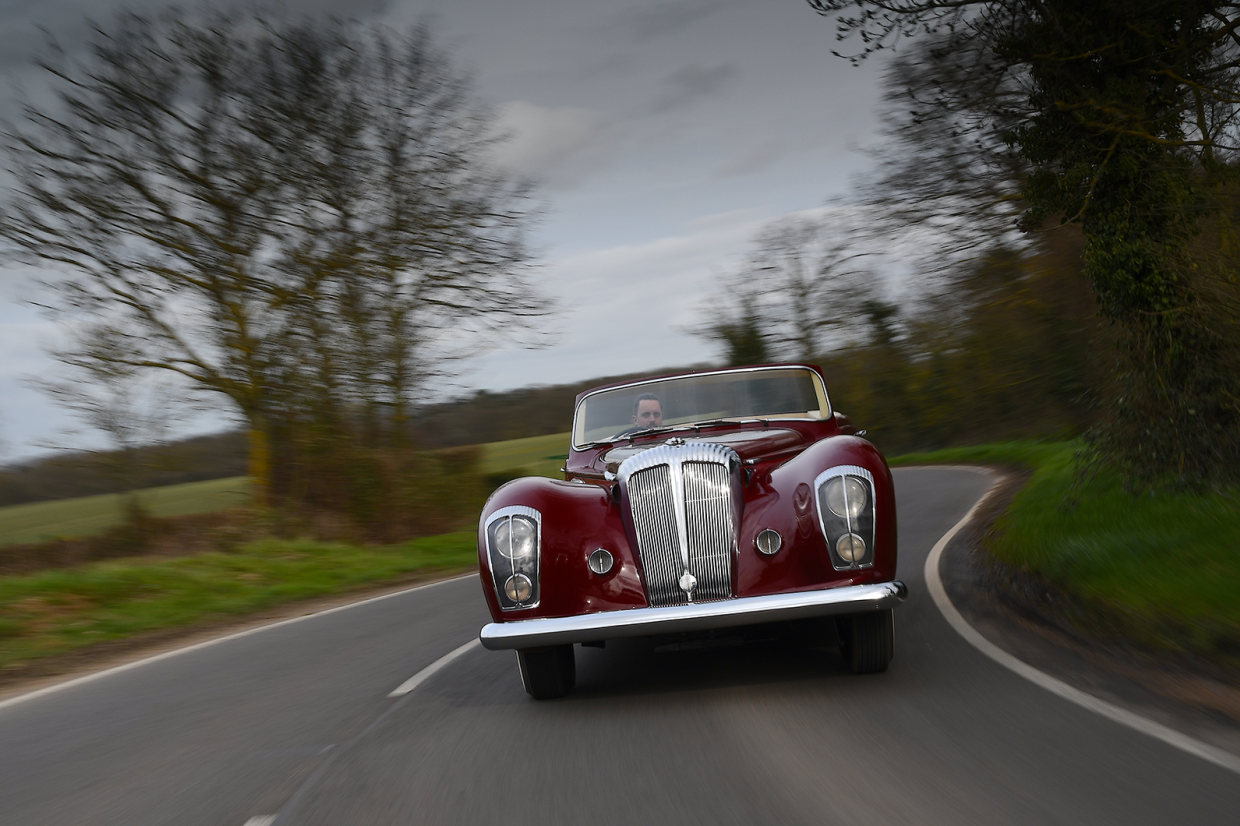 But nothing should detract from the importance of the car, which is the only one of the surviving DE36 Hooper Drophead Coupés to bear the original ‘Green Goddess’ design number 8183.

The other of the five remaining cars, including the original ’48 Earls Court Goddess, received changes in design.

Only two of the five survivors have been offered for sale in the past 20 years.

The Jaguar Daimler Heritage Trust DE36 was one of the five sent to America, chassis 51753, sold to opera singer James Melton via Fergus Motors in New York.

Author Clive Cussler had a Goddess with the faired-in lights in his collection, but it’s not clear which chassis. 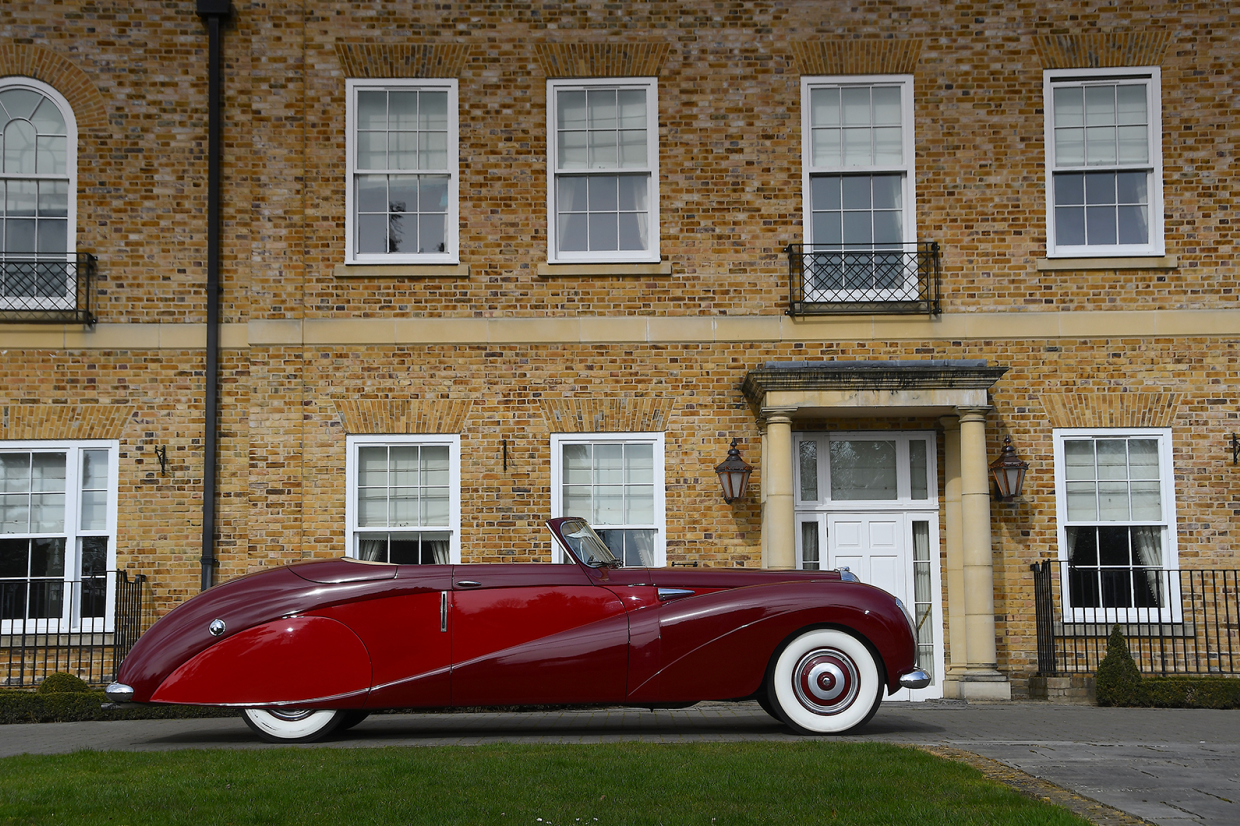 Without question, the Goddess is a beautiful car; Hooper design number 8183 is flowing and graceful, with hardly a line out of place.

It stands aesthetic comparison with any of the exotically clothed French Grand Routiers of the Delahaye and Talbot-Lago persuasion that it sought to emulate.

The flowing sides are interrupted by slots for trafficators and twin fuel caps, while the rear wheelcovers pop out on counterbalanced springs when a lever next to the back seats is released. The tail-lights are uniquely tiny in relation to the acreage of rear end they define.

Its full-bodied curves and bold but well judged proportions – appreciably wider at the front than the back – wouldn’t look out of place on the lawns of Pebble Beach: chassis 52802 won its class at the famous concours in 1994.

Like most of the cars you will find on those manicured expanses of green it is a machine for looking at rather than driving.

The doors are massively deep, the bonnet and bootlid – with its train carriage-style lock and visible wooden frame – hefty enough to need two hands. 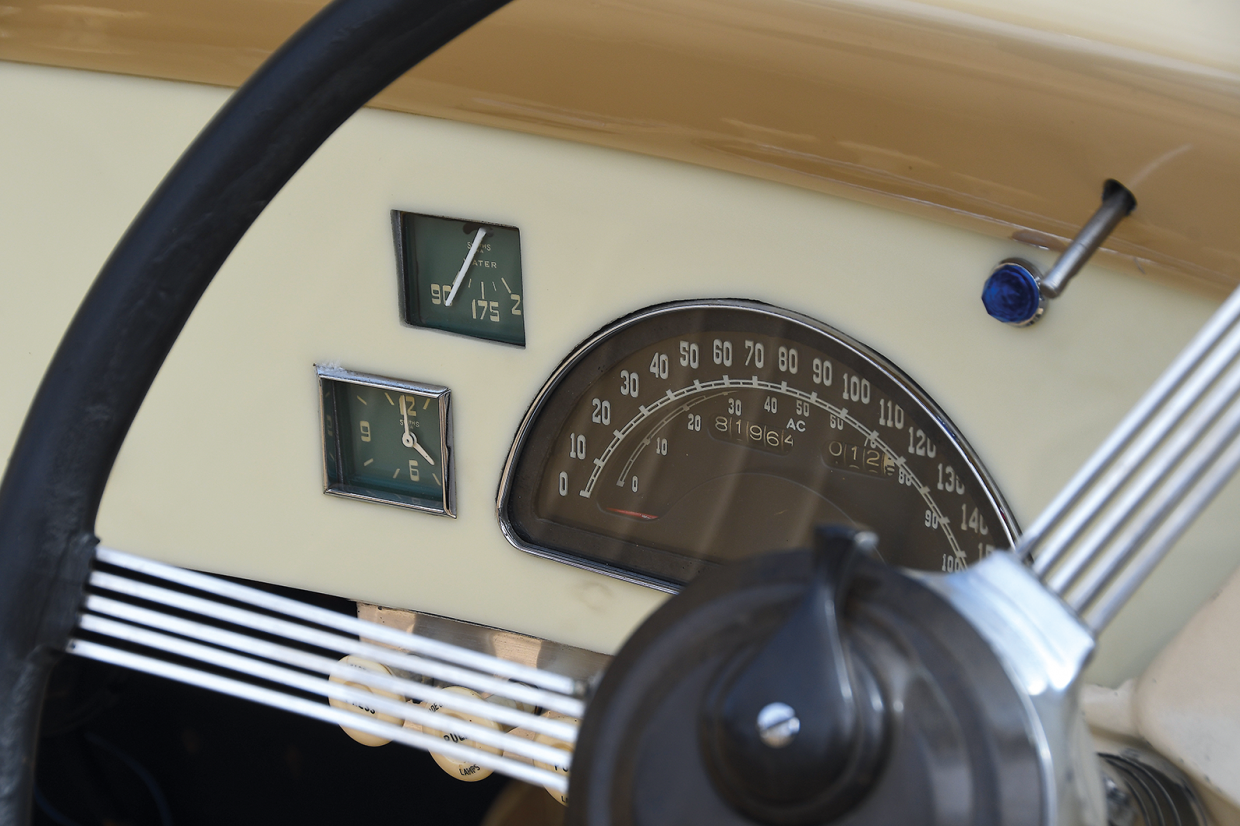 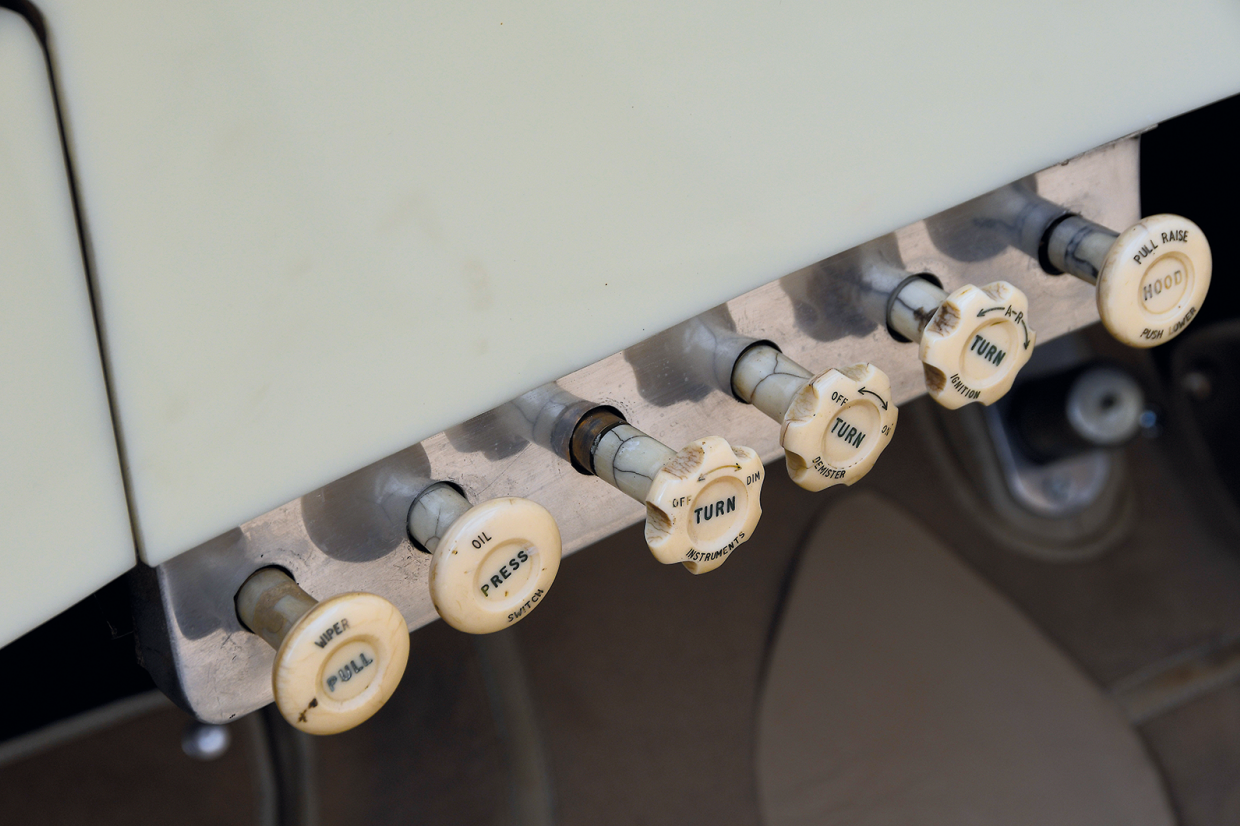 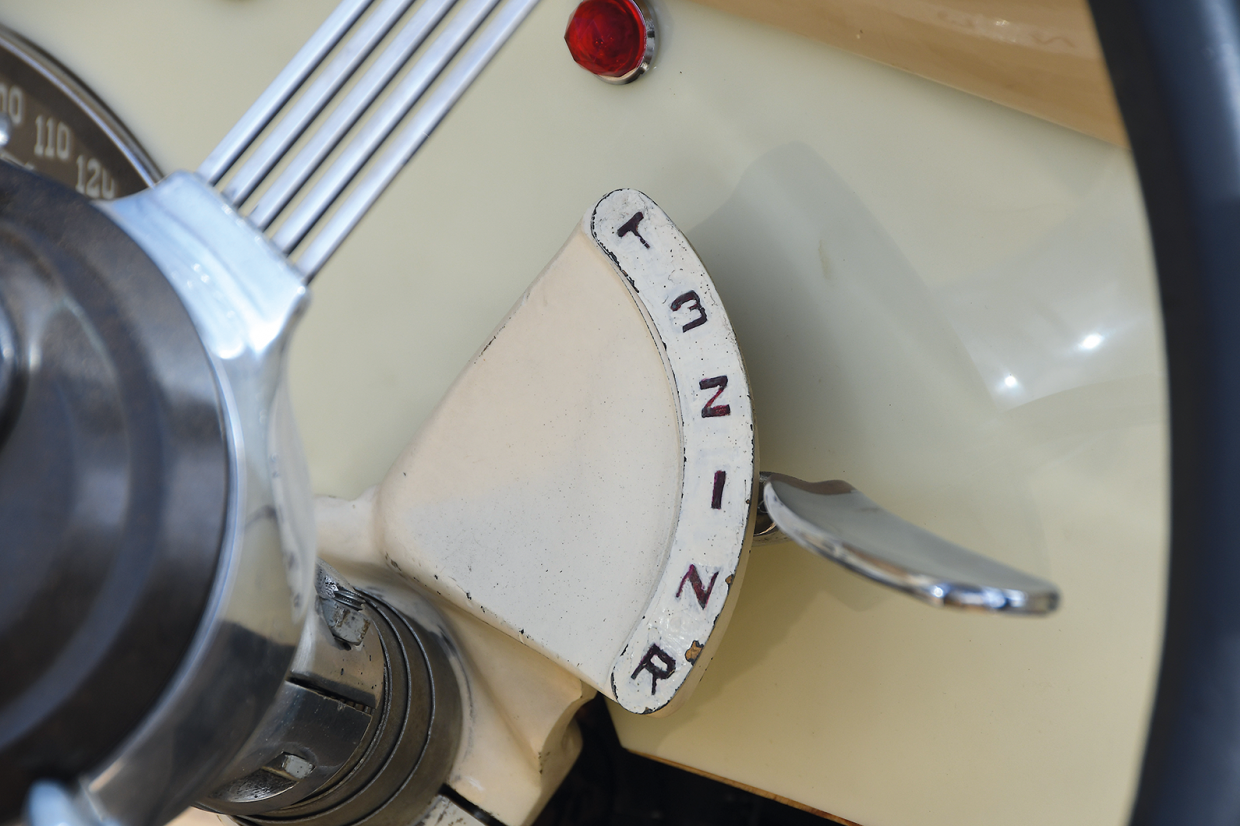 The long, deep engine looks like something you would find in a trawler or a bus, and is fed through tiny carburettors.

It is just a functional, refined means of power, not the Bugatti-style art that the idea of eight in-line cylinders conjures.

It is almost easier to get into the rear armchairs than slide behind the huge wheel and, once inside and peering down the massive bonnet, you feel like one of the small people from the beautiful brochure illustrations of the period.

The dash looks like something from the Aga cooking range, creamy and austere (later cars had wood, but I like this stripped-back post-war look), with matching Bakelite switches poking from underneath to work the lights, demister, hood and starter, plus some mystery functions such as ‘petrol pressure’ and ‘ignition’.

Delightful cream buttons perform separate up and down operations for the drop windows in the doors. 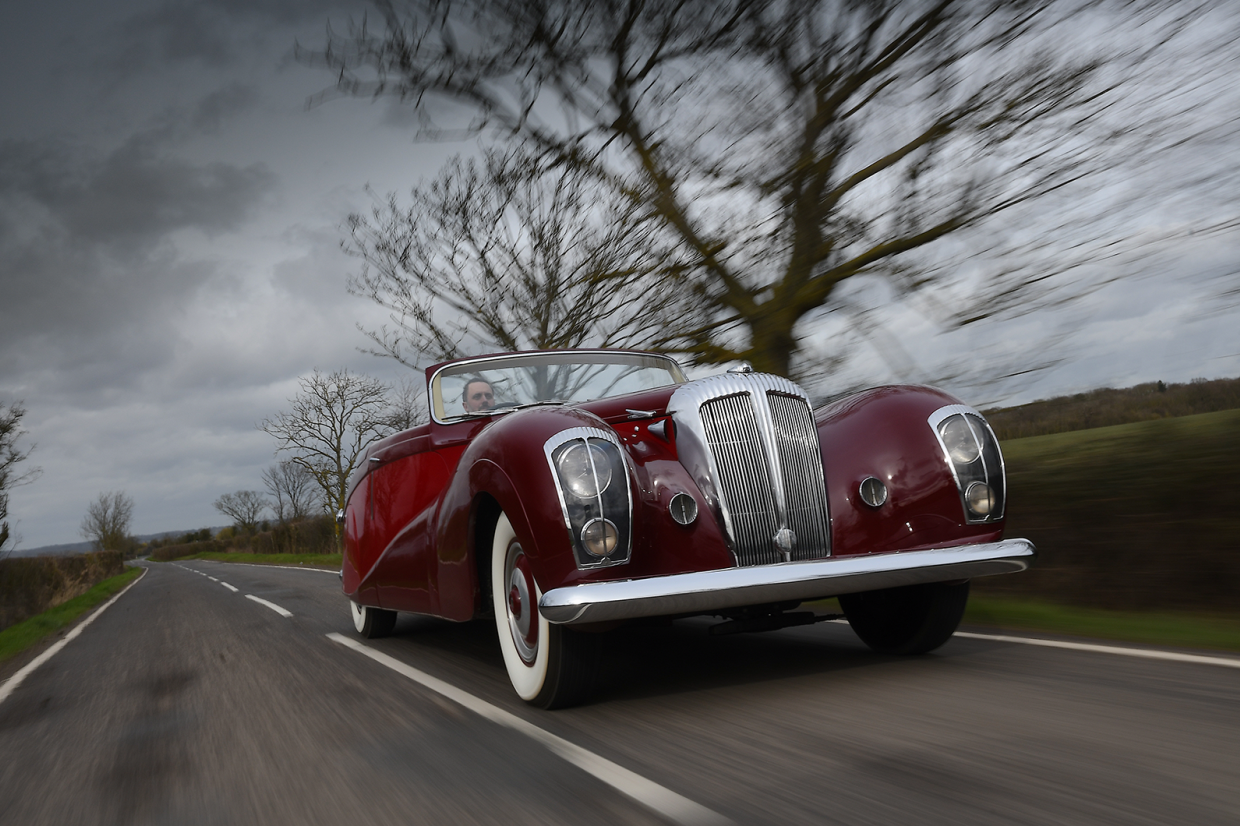 The Goddess has a rather sinister look out on the road, filling a rear-view mirror like nothing else.

It proceeds rather than accelerates, with a muffled hiss from under the bonnet and remote churning noises from the preselector ’box that allows you to change with your fingertips.

You can run down to very low speeds in the high ratios without having to control the clutch, which is really a ‘kick pedal’ that gives you your chosen gear once you have selected on the quadrant.

Steering and stopping the car might well be the sort of chore you would pay somebody else to do. Yes it understeers, but it doesn’t wallow; certainly not as much as it weaves, anyway.

The steering isn’t quite as hefty and vague under way as stationary investigations suggest. And while it isn’t a joy to handle, the sheer weight of the Goddess at least assures a luxurious ride. 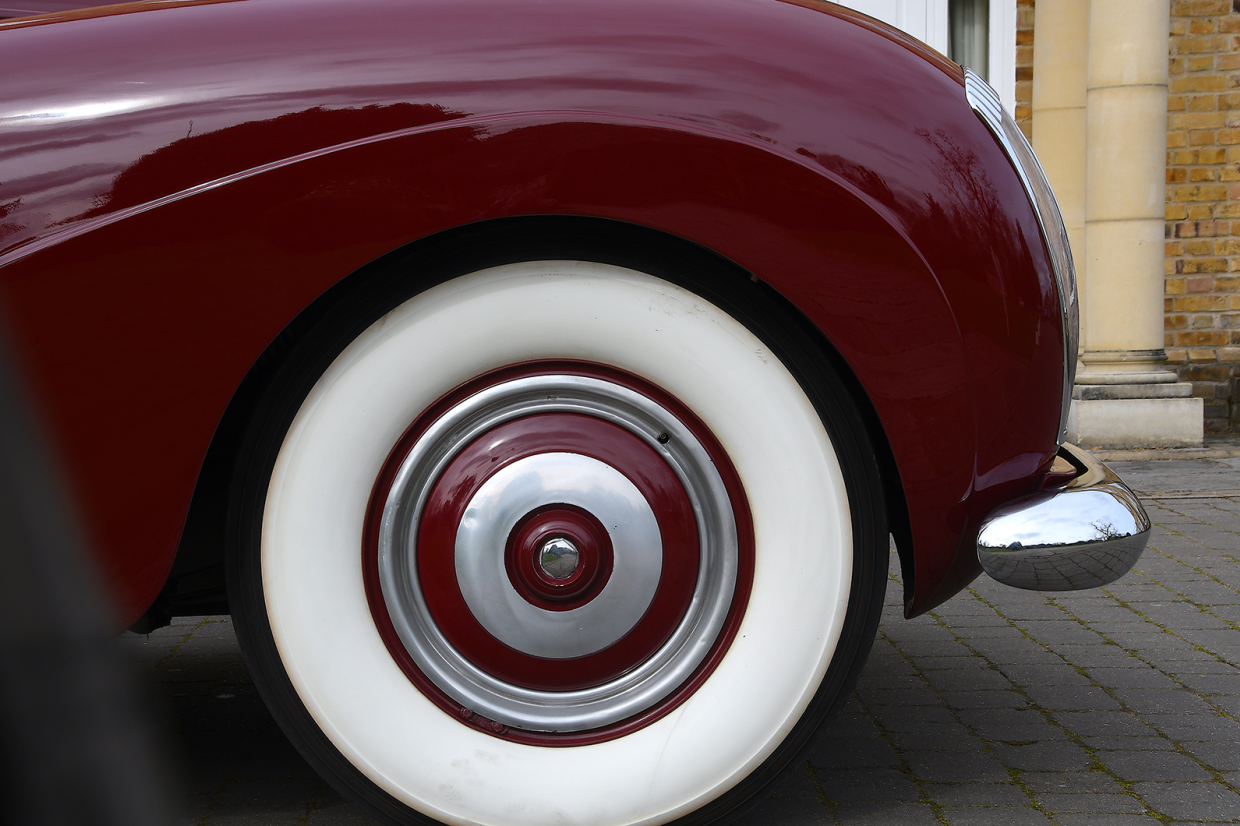 It doesn’t really matter what it drives like. The point is to celebrate that it exists, a grand flourish of traditional British coachbuilding skills, at the height of their creativity, combined with epic scale and lavish luxury.

Imagine it, fresh off the air ferry at Le Touquet and bowling through the towns and villages, a whispering giant of a car that possessed in spades what was in the shortest of supply in those post-war years: glamour.

It may be the greatest Daimler of all. Although I can’t help thinking that, were it anything other than a Daimler – with all the dreary municipal pomposity the name tends to imply, at least in this country – suitors would be forming a queue outside the Essex-based premises of Vintage & Prestige, where its £550,000 price-tag looks almost routine. 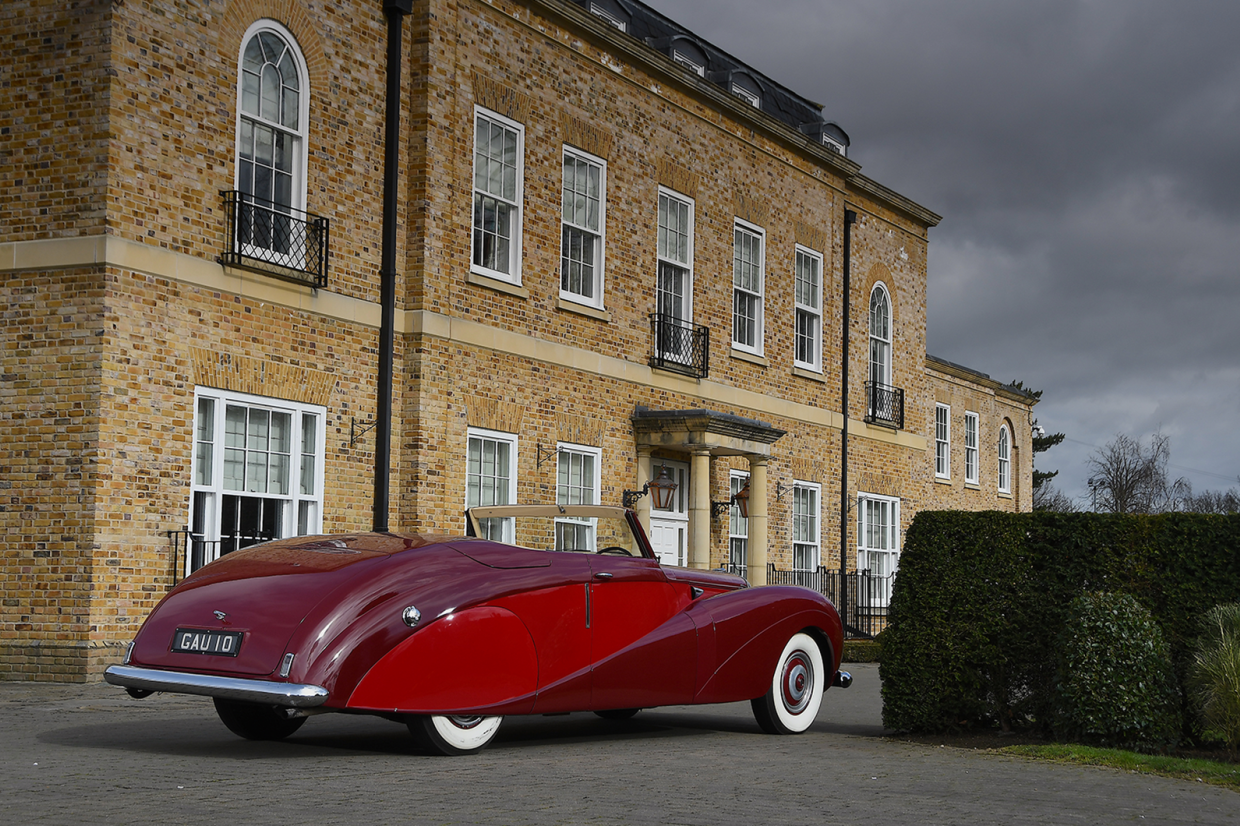 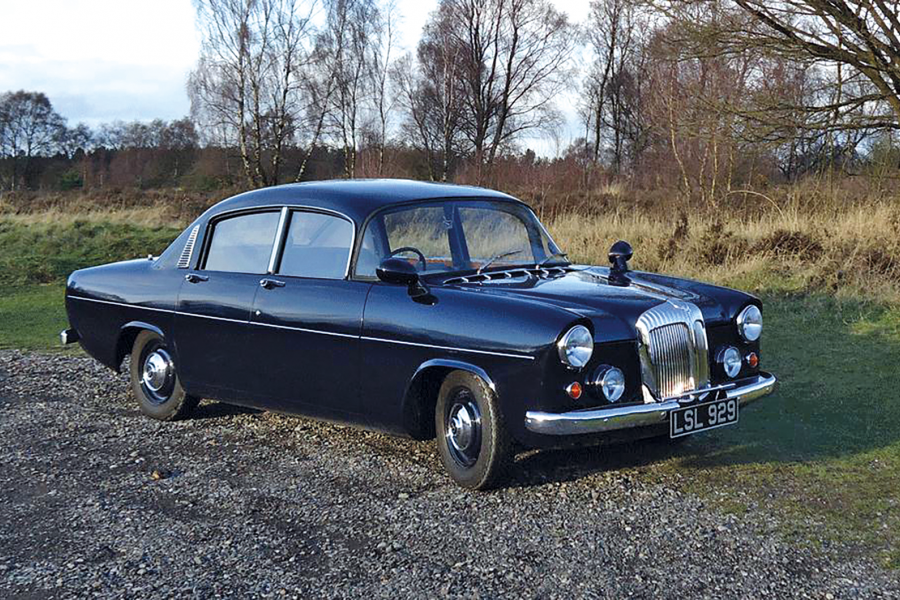 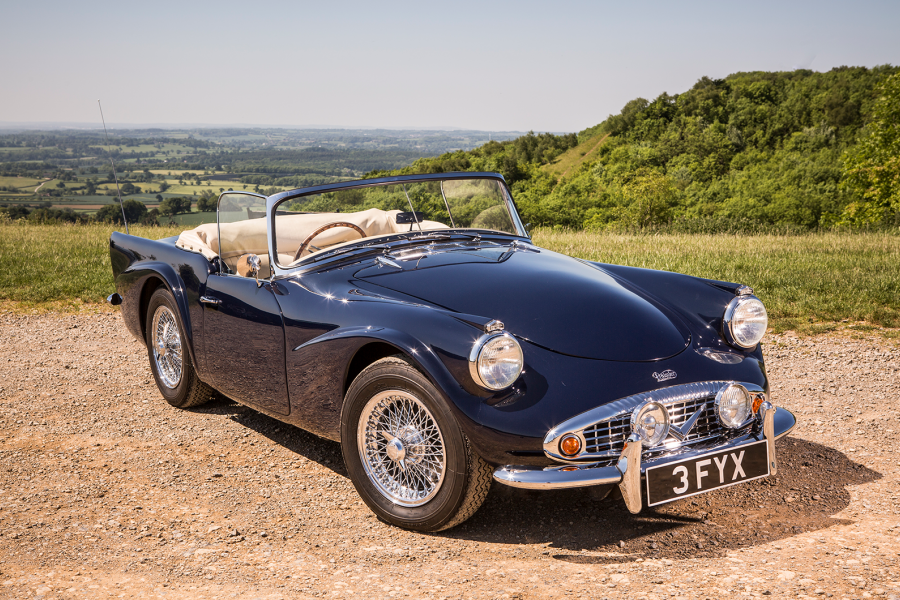 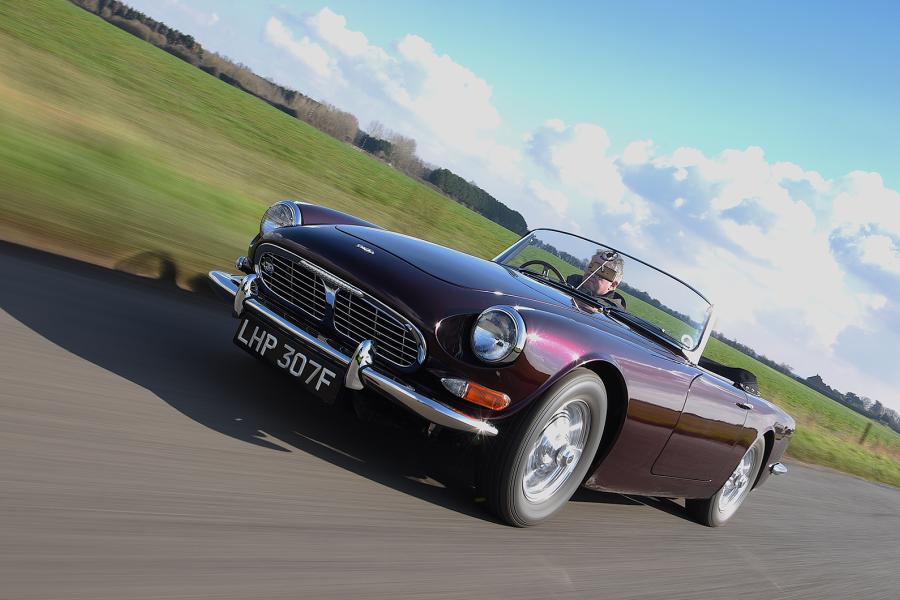 The Daimler Dart that never was – and the earliest SP250 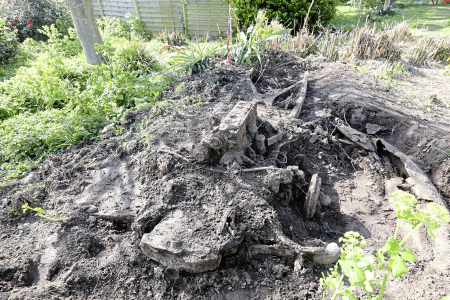