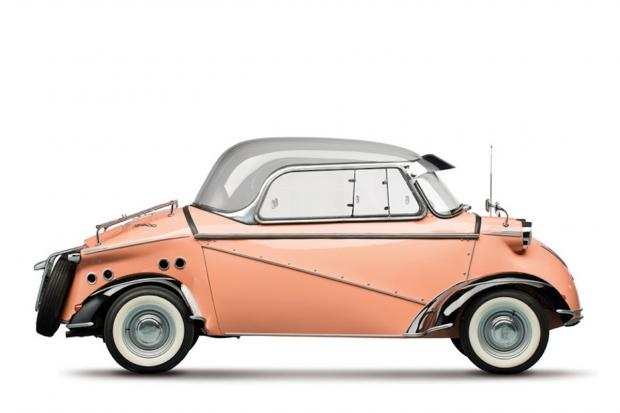 The much-hyped no-reserve sale of the Bruce Weiner microcar collection lived up to its billing with a raft of extraordinary and World Record prices racked up over two days in Georgia, USA.

As well as a wealth of memorabilia, almost 200 mini machines, some so obscure that they made normally leftfield cars look mainstream, went under the hammer at the RM event.

The auction house clearly had high hopes, having created a hardback book as a catalogue and built a dedicated website for the Microcar Museum collection.

Its efforts were rewarded with some astonishing results.

One of our favourite lots from the first date was the one-of-three 1957 Jurisch Motoplan Prototype (above), but even that made $90,000, $20k more than the rather better known 1957 Voisin Biscooter C31.

All of which made a mere $50k shelled out for a 1959 Frisky Family Three look rather a bargain!

Top seller on Friday 15 February was the 1959 Goggomobil TL-400 Transporter pick-up in Coca Cola livery that sparked a bidding war and eventually settled at $120,000.

At $80,000, the much vaunted 1959 Isetta Whatta Drag was one of few lots that didn't smash expectations, though. Given the way things were going, we were also surprised by the comparatively sane $66k raised by the 1953 Fuldamobil N-2.

All were dwarfed for the sale's top-seller, however, which nearly doubled its already healthy $150,000 estimate.

Based on a Messerschmitt KR200, the four-wheeler four-speed two-stroke Tiger had a top speed of touching 80mph and is one of only 320 built.

Datsun 240Z vs Triumph TR6: the battle for America