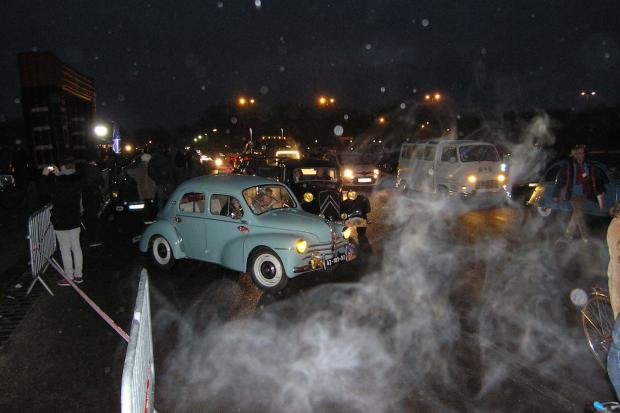 More than 700 classics of all varieties converged on Paris for the 17th running of La Traversée on 8 January. Everything from bikes, mopeds and motorcycles via cars and tractors to vintage lorries and coaches gathered at the magnificent Château de Vincennes royal fortress to the east of the city in time for an 8am start.

The route is altered every year and, for 2017, went via Place de la Nation before heading down Boulevard Voltaire into Place de la République. This year’s event celebrated the 1970s, so the massed classic convoy went past one of the French capital’s best-known landmarks – the Pompidou Centre on Rue Beaubourg.

From Beaubourg they headed up to Montmartre and the Sacre Coeur cathedral before heading back towards Place de la Concorde and Les Invalides. Both the latter are regular stopping points on the event, with an amazingly diverse range of machinery out for the day. This evocative G7 Citroën Traction Avant looked spot-on (here at République); it was one of several retired taxis taking part and brought back happy memories for many spectators.

Traversée regulars included illustrator Thierry Dubois, who brought the fabulous 1926 Ford Model T Doctor’s Coupe that he bought three years ago and his Peugeot 404. All of his vehicles are in regular use along his beloved route nationale 7 – the famous old trunk road from Paris to the Côte d’Azur, also known as the route des vacances, depicted in many of his brilliant cartoons. Dubois also produces the inspired artwork for La Traversée.

Nearby was the delightful 1969 Fiat 500L of Miguel Chessa, who’d had a great run in from in Rambouillet about 50km out of Paris. “I’m more of an Alfa man, but I also love the Fiat,” he explained. “I have the Giulietta 1800 in which I Iearnt to drive, a GT 1600 Junior and a 75 Turbo, and I try to drive them all every week. Fortunately, though, there are classic meetings nearly every weekend with regional clubs around Paris.” He’s now on the lookout for a Lancia, maybe a Flavia coupé.

Just across the way from the Fiat at Concorde was this eclectic line-up, with Arnaud Blanc’s glorious 1939 Panhard Dynamic alongside an MGB and a late-’60s Opel Diplomat.

Several Facel Vegas took part, most of which were black, such as this superb HK500.

Like the G7 Traction, this lovely ’50s Simca (here at Les Invalides) sports the meter on the driver’s-side front wing.

After Les Invalides, the convoy headed back to Vincennes where many of the cars gathered for a display at the Hippodrome racecourse including this superb Mercedes-Benz 600.

Jean-Jacques Chasseing built this fascinating one-off coupé by fitting an FT Bonito body onto an adapted Cox 1200 chassis. It packs a Porsche 911SC 3-litre flat-six, is good for more than 240kph (150mph), and has done 145,000km since it was completed in ’76.

This charming pair of a Rosengart Supertraction and Triumph Roadster looked good together.

Immaculate Renault 15, one of many ’70s rarities that are virtually extinct in the UK.