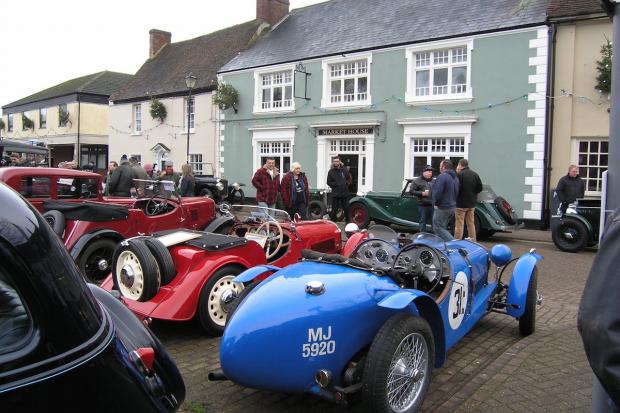 An amazing selection of pre-war machinery took pride of place around the Market Square at the seventh Vintage Stony on New Year’s Day. The top gong, for the Judges’ Take Home Car – decided with help from Classic & Sports Car – went to Duncan Ricketts’ sublime ERA E-type Grand Prix 1 on his 60th birthday.

The famous 1938 single-seater hadn’t been driven to Stony Stratford – although it was road-legal at one time, as Ricketts pointed out – but it was fired up twice, the second time as part of a minute’s noise to mark Lord Montagu’s passing. It instantly drew a crowd as the exhaust bark reverberated around the square while the exotic aroma of burning methanol filled the air.

Nearby, the oldest vehicle at the event gamely chuffed into life as show regular Jacqueline Bickerstaff won the battle of wills with her 1897-’98 Leon Bollée tri-car (below), which started after a few goes.

There were treats everywhere you looked, including the lovely 1938 ‘Waterfall grille’ Triumph Dolomite 14/60 saloon de-luxe that Brian Poulton had inherited from his father in ’57. He sold it in ’67, but he regretted parting company with the car, tracked it down, bought it back in ’89 and set about its restoration.

You seldom see one Brough, but a pair of the magnificent Dual Purpose models featured at Vintage Stony. Michael Glasser bought his 1938 straight-six model in 1979 and has racked up thousands of miles touring around continental Europe including Italy, Austria, Switzerland and the French/Spanish Alps. Howard Wilcox’s ’35 straight-eight was loaned to the Woolaton Park Industrial Museum in ’83 and stayed there until Wilcox bought and recommissioned the car in 2007. Since then, it’s also been a regular on Alpine tours.

There were plenty of younger rarities, too, such as the ’69 Ford Corsair 2000E that Hugh Billingham’s father bought when it was 18 months old. “It broke a ring on No3, so the car was put away for what turned out to be 17 years and was then restored from 1991 to ’97,” he recalled. “A 2000E that still has its original gearbox is something of a rarity, given how many were cannibalised in the ’70s. Just 31 are on the road, with another 25 on SORN.”

Across the High Street (behind the Landies) was the fantastic, all-original 1975 Renault 6 that Paul Bailey tracked down a couple of years ago. “I’d been looking for ages,” he explained. “My dad had one when I was a kid, and then a 16. I’ve never seen another 6 on the road – or at a car show.”

Here are a few more of our favourites from around the Stony Stratford event, which raised an excellent £3720 for nearby Willen Hospice…

Glorious 1914 Sunbeam 16hp was exported new to Australia and spent 50 years on a farm north of Perth before returning to the UK in ’92. It’s currently the only one of its type in use.

Another superb pre-war line-up, with a BMW 315, a Riley and a Lagonda

Opposite those two was another nice pair: a lovely Lotus Elite with a mint Triumph Vitesse

Rileys were out in force, with plenty of sports models and saloons

And you don’t often see a Trojan with a Delage

Or an ERA E-type with a Curtiss aero-engined special for that matter!