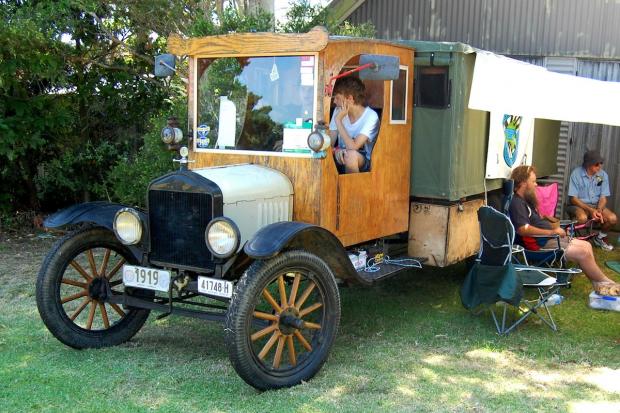 An impressive gathering of Ford Model Ts – including more than 20 different variants – took place at the picturesque  town of Gerringong, about 130km south of Sydney on the NSW coast of Australia yesterday (19 January).

The local Gerringong Heritage Museum is run by the Gerringong District Historical Society, staffed by volunteers and relies on donations to keep going. Murray Alcock lives close by, and he organised a display of Ford Model Ts in the adjoining park as a fund-raiser for the museum.

He started by rounding up some of the local T owners to add to his own cars, but it then became an official club run for the Model T Club which brought more from the Sydney area.

Alcock has a fine collection of cars, and also opened his ‘shed’ to T club members and visitors, to view the amazing collection of automobilia and stationary engines, one of which would occasionally explode into life for a ‘Putt-Putt’ demonstration of single-cylinder power. Some of his Model T based and well engineered Hot Rods were on display too.

On the day twenty Model T varieties turned up, and some of those were driven (not trailered) in 30 degree temperatures, but all arrived and parked up, mostly in the shade where available, and provided a tempting spectacle for locals and tourists alike to pay their $10 and have a look around.

T Club members later retreated to Murray’s shed and garden for some BBQ sausages and shade from the midday sun, but by then the museum had raised over $2,000 from the day’s activities.

Among the cars on display, chronologically, were:

Keith Carter’s 1909 Tourer, re-assembled from original parts, but not ‘restored’ it even wears a tag on the radiator asking passers-by not to polish the brass.

Peter and Sally Kable’s 1913 Speedster has a Frontenac OHV cylinder head and a long history, and was one of the most popular attractions all day.

Peter’s other car on display was a 1915 Model T KampKar, a primitive Winnebago of its day that has not only been all around Australia, but across America west to east for the T’s centenary rally in 2008, followed by a spell in the Model T museum, then a return trip a couple of years later via Canada before being shipped home from LA.

Harry Power’s 1916 Fire Engine was also a major attraction all day, and not just for the kids!

The 1919 CenterDoor Sedan (that is what Ford called their closed four seater with the door in the middle) of Richard Day was recently a star of the Great Gatsby movie, but today settled for being a star of the club show at Gerringong.  Always immaculately turned out, it hides a twin-carb’ Rajo OHV conversion under its upright and black exterior.

Steve Fleming’s black ’21 Roadster has an attractive and well made body by Sweeney’s Motor Works of South Brisbane and is the only known survivor of the type.

Bob Wilson’s 1923 Roadster also has a unique body and this car completed a 10,000km drive around Australia on a rally to mark the Model T’s centenary year of 2008.

Also from 1923 is Murray’s Holden bodied Tourer. Restored to perfection, this was probably the favourite among the T club members, and it is always controversial because although in the ‘twenties Holden was an independent coach building business, these days of course Ford and Holden are the two rivals in the (disappearing) Australian motor industry.

We also had a couple of one-ton TT trucks, and Tourers and Sedans through to 1927, but although over 15 million Model Ts were famously produced it is the variety of models that always surprises.