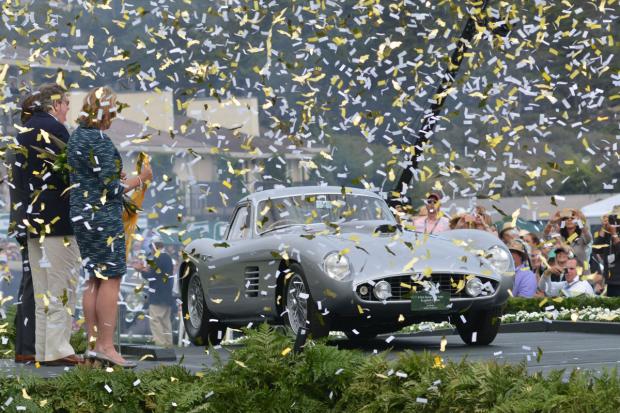 Few could have guessed the shock winner of the 2014 Pebble Beach Concours d'Elegance on 17 August when the final three cars gathered for the Best in Show announcement. Jon Shirley's Ferrari 375MM Scaglietti Coupé lined up with Lord Bamford's magnificent Rolls-Royce Phantom III, and the 1934 Packard Twelve Dietrich Convertible Victoria of Frank Ricciardelli.

The post-war beauty looked a mystery intruder. But, to everyone's amazement, the silver 1954 Ferrari was the last called up for the coveted prize. None were more surprised than owner Shirley. Not since 1968 has a post-war car won the world's greatest concours, when a new Maserati Mistral Coupé took top honours.

"It is a rare and unusual car which created a real buzz with the judges," said chief judge Christopher Bock. "We hope this will set the tone for things to come."

The car was ordered new by film director Roberto Rossollini, who had it rebodied as a coupé by Scaglietti after the first Spider body was destroyed in an accident. It appeared at Pebble Beach in 1998 where it only won its class, but was never a Best of Show contender due to the event's tradition of only pre-war cars taking the top gong.

This year's event was rated as one of the vintage years, with its fantastic range of special groups including Tatras, Ferrari Testa Rossas (below), Ruxtons (two below), and Fernandez et Darrin coackwork (above).

Other featured groups included a wonderful line-up of steam cars headed by the amazing 1892 Philion road carriage built by Achille Philion, the travelling showman known as The Marvellous Equilibrist and Originator. It was the sensation of the 1983 Chicago World's Fair and later appeared in the Orson Wells classic The Magnificent Ambersons.

Talk of the Preservation class was a 1936 Horch 853 Cabriolet, which was confiscated by the US forces from a German general in 1945.

The surprise winner of the post-war preservation group was Jackie Stewart's son Paul with his newly acquired Ferrari 275GTB4.

C&SC's editor-in-chief Mick Walsh presented the Classic & Sports Car award for Most Elegant Open car to Bill Parfet for his Auburn 12-165 Salon Speedster, which is one of just six surviving examples of the 16 built in 1933.