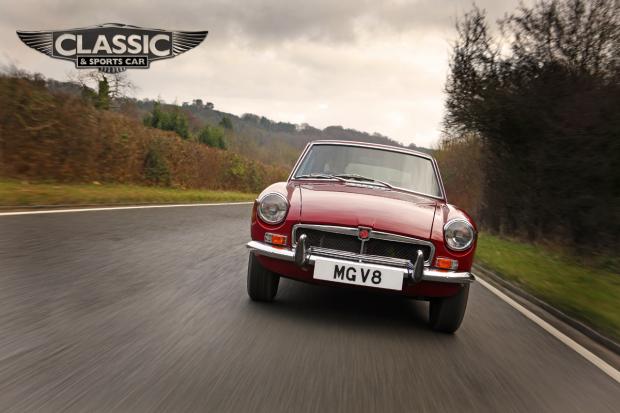 So asks Graeme Hurst after a blast in an MGB GT V8, the brilliant and affordable coupe from the darkest days of British Leyland.

You’ve got to hand it to British Leyland. It might be the butt of many a joke – admit it, our hobby would be duller without the likes of the Allegro – and provided a sad, drawn-out conclusion for our once-illustrious motoring industry, but the bumbling automotive behemoth did manage to squeeze out a few gems along the way. The problem was that the very bureaucracy it created to streamline the products among its many acquisitions often scuppered their chances of success. And the short-lived MGB GT V8 of 1973-’76 is a prime example.

Brawny American V8 transplants were nothing new to early-’70s Britain, having added spice to plenty of home-grown cars such as the TVR Griffith, Jensen Interceptor or Bristol 407. Yet few left enthusiasts as bewildered as the MGB GT V8. Slotting the Buick-derived light-alloy V8 – which had already become a production mainstay within the BL group in its Rover and Land-Rover products – into a sports car whose pace was restricted by an out-of-date cast-iron pushrod ‘four’ must rank as the ultimate performance recipe. Yet it took BL the best part of a decade to get around to it, and even then it was only after its engineers’ claims that it couldn’t be done had been proven wrong by a local tuning ace. Sadly, by that time it was a case of too much, too late. Launched on the eve of the fuel crisis, barely 2500 MGB GT V8s rolled out of Abingdon before production was curtailed as part of a product line rationalisation.

Tarnished by its BL heritage and a lack of badge kudos alongside some of its more prestigious GT rivals, the potent MG has long languished as an under-appreciated yet hugely accomplished sports coupé. Drive one and its pace will leave you with a mixture of awe and frustration as you realise how successful the model could have been, had it been on offer a decade earlier. Here is a design that’s nudging 40-years old, yet offers 0-60mph in 8.6 secs and 125mph ability. In the early ’70s, you’d have needed the keys to some expensive kit to match those thrills. Today, the MGB GT V8 is an enigma: a car that rivals the comfort and performance of an E-type 2+2 – or even a DB6 – for a fraction of the price, yet has never commanded serious attention.

A lot of the V8’s failure to deliver in period comes down to the disastrous reception of its predecessor, the six-cylinder MGC. What was supposed to be a late-’60s replacement for the Big Healey ended up as a compromised MGB that diluted the original car’s sporting image with its taller gearing and nose-heavy handling. When the C was dropped just two years after its 1967 introduction, it left the MGB struggling alongside increasingly rapid competition – something several B owners acknowledged by opting for a V8 conversion. The motor swap was engineered by Ken Costello in 1970, three years after Rover had put the P5B into production following its acquisition of the rights to Buick’s fabulous all-alloy V8.

The benefits of Rover V8 power in a B were soon picked up by the press and high-profile road tests spread the word. BL was also aware that rival Rootes’ Tiger – an Alpine with a Ford V8 shoehorned in – had been popular before parent firm Chrysler killed off the concept. It was also irked by someone else improving its products and ordered a car from Costello in 1971 to assess the feasibility of its own version. With company bosses still smarting from the MGC fiasco and sales of the B strong – nearly a quarter of a million were on the road a decade after launch – you can forgive BL some reticence, but the metrics of the transplant must have made it mighty tempting. The 3.5 V8 weighed just 318lb, 40lb less than the B’s 1.8-litre cast-iron lump, and could – as Costello proved – be made to fit its engine bay with only minor alterations.

With a whopping 75% increase in torque, there were no question marks over the predicted performance, but a shoestring budget and the memory of the MGC did constrain Abingdon’s engineers. The V8 had to look like – and be called – an MGB, so changes were limited to squeezing in the all-alloy unit, with the running gear otherwise largely untouched. That meant lever-arm dampers front and rear. In 1973. Also out of date were the B’s live axle and cart springs, but BL didn’t have suitable independent rear suspension it could modify to fit so the aged set-up remained, albeit with beefed-up springs to prevent the torque translating into embarrassing axle tramp when owners gunned away from the lights. To keep a lid on fuel consumption, the V8 was given the MGC’s tall 3.07:1 differential ratio, while the brakes were uprated with bigger front calipers and rear drums. The only other technical change was a switch to composite steel-rim/alloy-centre road wheels. Specially developed by Dunlop, they were needed to cope with the torque and became a trademark of the V8 variant. They were shod with wider rubber (175 instead of 165) with an HR speed rating in place of the B’s SR specification. Transmitting the power was a standard MGB ’box with overdrive on third and top (or fourth only from ’74). Aside from the wheels, the only clues to the GT’s identity were a black honeycomb grille and discreet V8 badges on the grille, nearside wing and tailgate.

The discretion evaporates when you turn the key. Gone is the hard tone of the four-cylinder, in its place a muted burble that’s creamily smooth when you blip the throttle. The torque that accompanies that rumble is utterly beguiling. Where the four-pot B needs to be worked to give its best, the V8 just lets it all out from the moment you drop the clutch. You can swap cogs if you want to – which is hardly a chore with the close, precise gate – but equally you can pull away in second and slot it into top long before you’ve nudged the urban speed limit. Not that the low-down grunt detracts from its top-end abilities. Hang on to each gear and the V8 beat quickly evolves into a menacing snarl, although there’s not much to be gained from wringing it out past 4000rpm: better to surf the torque and marvel at how easily the speed builds. With just 2427lb to ferry around – making it more than 500lb lighter than a V8 Rover P6 – the MG delivers plenty of thrills.

That lack of extra pounds up front also means that the V8 retains the basic B’s natural balance, although the combination of the added oomph and slightly wider rubber means that it doesn’t feel quite as crisp as the regular MGB. It’s agile for something so powerful nonetheless, although things do start to get exciting if you pile into a corner. The beefier rear springs make the ride overly harsh, so the tail can be skittish compared with the more compliant standard BGT. The extra torque probably plays a part, too, as do the antiquated lever-arm dampers, which struggle when the back end starts to oscillate as you power through sharper bends. Wind noise at speed is another area that was exposed by the added performance, with Autocar lamenting that the V8’s excessive boom and firm ride had ‘no place in a GT car costing over £2000’.

What Car? was similarly scathing about the MG’s interior, suggesting that its scattered instruments ‘go back to the ark’. Ergonomics may have been the new buzzword in early ’70s car design, but today the switchgear and Smiths instruments are warmly familiar. Where the interior does impress is with the space it offers, up front at least. The cockpit is snug and the rear seats are limited to (small) children, but the deep footwells are spacious, leaving you free to manhandle the big steering wheel should you decide to indulge in the thrilling performance. Perhaps the biggest impression, however, is the wolf in sheep’s clothing personality that came from BL’s parsimony. With little apart from badging and wheels to set it apart, the V8 appealed for its combination of massive grunt and understated looks. What the GT V8 desperately needed was more exposure, particularly in the all-important US market, but MG couldn’t get the engines it needed out of Rover’s Solihull plant to meet local demand, let alone contemplate quenching the thirst across the pond. With the V8 then powering Range Rovers, Rover P6s and even Morgans, Abingdon was limited to 40 units a week – which made any thoughts of developing the engine to meet stringent Federal emissions laws simply uneconomic.

You can’t help but laugh at the irony of an American engine falling foul of its own country’s emissions legislation, but the Buick-based V8 was essentially a design that originated at the close of the ’50s. The timing of the 24mpg sports car’s launch to coincide with the 1973 fuel crisis hardly did it any favours, either, and nor did inflation. When the BGT V8 was launched it cost £2293, a heady £746 more than its four-pot sibling and £642 more than a 3-litre Ford Capri, arguably its nearest rival. By 1976, however, the V8 carried a price-tag of £3701 when the Dagenham favourite was on showroom floors for nearly a grand less.

Inevitably, though, the hammer-blow came from within. BL was keen for its Triumph TR7 and upmarket Stag (both products of its new and expensive Speke plant) to spearhead the firm’s GT attack. With the Stag offering V8 power and BL set to give the TR7 a Rover V8 transplant to become the TR8, there wasn’t space for a rival and V8 MG production was halted in 1976. Harris Mann’s ‘wedge’ styling and the TR7’s ergonomic interior was giving the motoring public a taste of the future, while the MG’s only ‘update’ was a switch to the much-derided rubber safety bumpers. Its interior was beginning to look seriously dated, too: the combination of a crackle-black dash and chrome-rimmed Smiths gauges was as outmoded as a tie-dye T-shirt at a Led Zeppelin gig. So it was no great surprise when, four years after the demise of the V8, MGB roadster and GT production also ceased with the much-publicised closure of MG’s Abingdon works. Not that it was completely dead. The model’s huge enthusiast following later persuaded the Rover Group to restart production of brand-new MGB bodyshells, and even to develop an all-new Rover V8-powered MG, the RV8 roadster.

With just 2591 cars built (compared to the 125,282 regular GTs that rolled out of Abingdon), the BGT V8 is a real rarity in MG terms, yet little more than a footnote in the marque’s history. Throw in the ravages of the British climate and spiralling costs of restoration, and that figure will have been significantly slashed over the years – making a V8 rarer today than many of the hand-built rivals that cost 5-6 times as much when they were new. Surely it is now time for this forgotten great of the classic world to get the recognition it deserves.

This article was originally published in the January 2010 issue of Classic & Sports Car magazine, which retains the copyright to all words and images. Click here to see the terms and conditions.