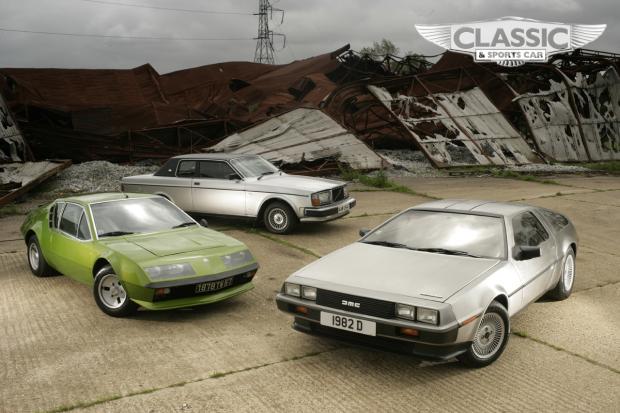 The 'Douvrin' should be recognised as one of the great engines, says Dave Richards as he drives three disparate cars powered by the versatile V6.

We’re used to certain engines being lauded for their excellence, longevity, ubiquity and heritage – Austin’s A-series, Jaguar’s XK and the small-block Chevy – but there’s a more recent motor that’s a serious contender for a place among them. This engine has nearly as wide an installation list as BMC’s pushrod four, features a single cam per bank  upstairs (not quite aping Jaguar’s dohc), and has its cylinders mounted in a 90˚ V just like the revered small-block Chevy. It had a 32-year life from conception in 1966 to the end of production in June ’98, and 970,315 units were built.

So what is it? It’s the PRV Z engine, known as the Douvrin V6, natural habitat the Volvo 264, Renault 30 and Peugeot 604. But it was also fitted to the Matra-developed Espace people mover and as recently as 1998 powered Le Mans contender the Helem V6, based on the Renault Sport Spider. It may not be an obvious choice in the English-speaking world, but in the lands of Aznavour and Abba it was a range-topping icon. As if to prove its versatility, it links three disparate-looking contenders – Volvo’s Bertone-built but in-house designed 262C personal luxury car, Alpine’s sensual A310, and John Zachary De Lorean’s pet project, the supposed ‘ethical car’ that proved almost anything but, the DMC12.

The engine’s creation lay in an April 1966 contract between Peugeot and Renault to jointly manufacture common mechanical parts, and in 1969 La Française de Mecanique – FM – was formed with a factory base at Douvrin, on the outskirts of Lens in northern France. By 1971, Volvo’s new chairman Pehr Gyllenhammar wanted in on the action and, with Renault, Peugeot and FM, set up Société Franco-Suedoise des Motors PRV. Work started on creating a new high-power eight-cylinder 3½-litre all-alloy wet-liner engine. Late in the develoment, however, the 1973 fuel crisis hit, the market for smaller-engined cars increased and the plans were rapidly revised. As a result, 2664cc would be the initial swept area for a V6 version of the stillborn V8, not least beacuse in France there was already a precedent in production. The Citroën SM used Maserati’s V8 with two cylinders lopped off the end. The big headache for PRV’s engineers was to get the motor to run evenly – 90˚ crank offsets meant the timing had to be different for each cylinder bank to operate smoothly.

This ‘Z’ engine was launched in the Volvo 264 on 3 October 1974, followed by the Peugeot 504 coupé and cabriolet, then the Peugeot 604 and Renault 30TS in March 1975. Low-volume manufacturers took notice of the advanced engine too: Dieppe-based Alpine had been bought by Renault in ’73 and was intent on putting the Douvrin into its new A310.

Volvo, meanwhile, was trying to bolster failing US sales with an attention-grabbing range-topper. Prototypes designed by in-house engineer Jan Wilsgård featured triple crown motifs on the C-pillar, so the 262C became referred to as the Tre Kronor, or three crowns, even though the production car was only fitted with one. More importantly, the new engine would be emissions compliant for Volvo’s US market. This also suited John De Lorean’s ethical car concept, but he’d offended so many in the US that supplies of chassis and engines would not have materialised, so eventually his car was based on a Lotus Esprit fitted with the Douvrin engine. His target market was the USA, where he hoped to destroy what he saw as ‘cancerous amorality’ within the motor industry.

The Volvo stands tall with the bulk of the design sitting heavily over the 14in alloys. That tough curve on the C-pillar, the turret-like vinyl-covered cabin top and the rake of the A-pillars conspire to give the car a hunkered stance. Check the specs and it seems to have all the millennium requisites too. Modern inconveniences are all present, but existing within an envelope that screams Night Fever. Open the door and you’re presented with an interior that, Volvo dashboard excepted, conjures up 1970s disco bondage. The pleated and rouched leather seats are banded by perforated 2in-wide leather straps that wouldn’t look out of place at Cynthia Payne’s place. Settle into the chair – ‘seat’ doesn’t do the Bertone-trimmed thrones justice – and the instrument view is typical Volvo: minimum dials, logical switchgear and an ergonomic layout that seems created with a sensible, slightly furrowed, brow.

Lever in Park, flick the key and the V6 burbles into life. It idles quietly and the cabin seems well insulated. Slide into Drive, drop the handbrake and the car sets off at a torque-converted walking pace. Flex the throttle, and the car heads off with brisk acceleration and a neutral stance. The hydraulically assisted steering is feather-light and the brakes inspire confidence with a vast servoed bite to bring the speed down. It’s a fine device for tooling around urban sprawl, with damper rates tuned to soak up rough ground and the cracks that appear between the sectional concrete roads found all over the USA. Fine for its intended market then, but in Europe the lack of cornering poise is a severe hindrance to press-on progress.

Small wheels and relatively narrow tyre contact patch conspire to negate any feeling of turn-in. Approach a sharper kink, flick the steering wheel and the car rolls on to the front tyre-walls and understeers like a stuck pig, with attendant squealing. Even so, as a dollar-earning headline act, it sold for much more than the car it was based on, and didn’t take production volume away from Volvo’s Kalmar factory. The anomaly of the 262C is that it is a European car built for US taste, losing identity and integrity in the process. If you wore Dralon loons and needed to look cooler than Huggy Bear on Brooklyn’s mean streets back in ’78, though, a 262C was the tool for the job.

The DMC 12 is almost the complete opposite. It seems entirely American, from its flawed creation by John De Lorean to the car’s starring role in Back to the Future. De Lorean learned what the American buyer wanted from his time turning around Pontiac in the 1960s and Chevrolet in the ’70s. That’s if you believe his official biography, On a clear day you can see General Motors by J Patrick Wright. In setting up his own company, he first tried to buy the mid-engined Corvair sports car prototypes (C&SC, April ’06) from GM, but failed. He then got William T Collins Jnr to work on an initial proposal with Giugiaro’s Italdesign while Lotus was enlisted to productionise the prototypes. Rumour has it that Colin Chapman asked for a personal cheque for $17million to ensure the design was completed within the two-year timeframe De Lorean was working to.

The result was an amalgam of Lotus Esprit and Douvrin V6, clad in pizza-oven stainless over an Elastic Reservoir Moulded GRP sub-structure, on a GKN-built backbone chassis. So the all-American ethical car vision became a cocktail of financially constrained design inputs. Lift that gullwing door and it doesn’t feel compromised. Step over the wide sill, and sink into the leather seat. Reach up to your left and tug down the door, making sure it catches front and rear, otherwise it’ll rattle. Look to the left, and the A-pillar seems far away, with a slim, lightweight curve that holds a slender ’screen pillar. The pronounced tumblehome gives plenty of elbow room outboard, but inboard you are slightly hemmed by the transmission tunnel, swathed in peaceful pale grey leather. Try to resist playing ‘spot the source’ for the switchgear, vents and heater controls.

Yet the DMC is more real, more serious than its comedy icon status would suggest. The Douvrin fires with a muted burble, chunk the lever into first, step off the clutch and the car pulls away strongly. It’s much more insistent than we have been led to believe. The change is slightly baulky as you swap cogs, with more revs the irregular Douvrin note warbles slightly as revs climb. Your semi-prone driving position feels more natural as the car gathers pace, and its wide-track stance comes alive as you enter a corner. There’s little roll and a flick of the wrists is all you need to change the yaw angle mid-corner, though there’s no doubt over where the engine sits. Its presence far out in the tail gives a moment of inertia that seems just inboard of your right shoulder. That’s what makes the car great: the subtlety of its control of the driving mass, the messages it gives a spirited driver.

And that’s almost the total opposite of the Alpine A310. Vibrant paint draws your eye from the irregular panel gaps to the intense arrow shape, fronted with beautiful headlamps. It’s so low you could trip over it, and make sure you don’t sneeze as you get in because you’d blow the dash top off. Touch the instrument surround and it really does bend 3in as your hand falls on it. The gauges are lobbed into a flat panel fairly randomly, and while the nylon fabric is all there, and in good condition, the car conveys no more than a sense of flimsy when you settle in.

Crack the key and the impression is smashed. A310s were four-speed, but this one has five in the transaxle, plus a few performance tweaks. Dip the clutch, snick first and bury it, and the lightweight machine snarls forward. Before you know it, you’re heading toward a bend the Volvo tackled at 45mph, which became a curve when the DMC carried 60 through, and this Alpine’s treating it as nothing at 85, the screaming V6 heading round the rev counter and needing another gear thrown at it. As curves tighten, the A310’s steering lets you understand the car’s mastery. It’s pin-precise, exquisitely weighted and transmits every nuance of road surface, grip level and wheel angle friction coefficient. Lean heavier into a tightening bend, and the back end steps out with chirruping tyres. A snatch of opposite lock brings the chassis into line and, throttle wide, the Douvrin punches the car forward again. That’s how the Douvrin motor shows its versatility and depth, with a chameleon character for whatever vehicle it lands in.

Each of these cars has its own sense of anomie. The Volvo for its disturbing sense of displacement, for being neither an American luxury compact nor a European bespoke exotic. The DMC12 carries the emotional baggage of its birth, death and creator, and the Alpine adopts the principle of uti possidetis – it is a belligerent fully deserving of that which it has acquired, Douvrin’s amazing V6.

This article was originally published in the September 2006 issue of Classic & Sports Car magazine, which retains the copyright to all words and images. Click here to see the terms and conditions.