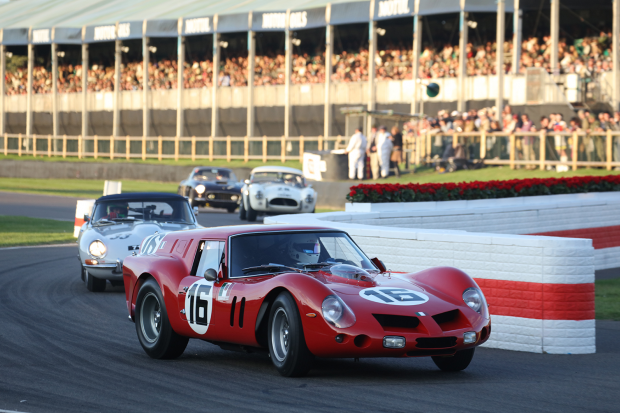 The first race of the 2018 Goodwood Revival Meeting kicked off the weekend of historic motorsport in the best possible way, with an epic duel for victory in the Kinrara Trophy, claimed to be the most expensive on-track contest of all time.

It was the perfect finish to an idyllic, sun-kissed day in West Sussex, featuring the Duke of Richmond’s legendary attention to detail and great cars as far as the eye could see.

Even before visitors made it into the site proper they were treated to the now-customary car parks of The Revival Car Show, packed with a wide variety of wonderful classics. And things only got better once they were through the gates. 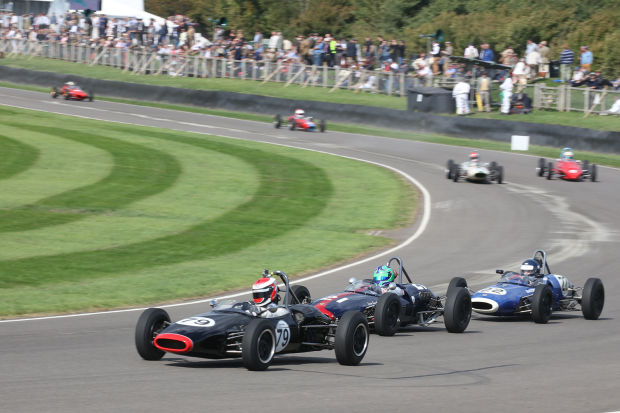 The qualifying for Sunday’s Chichester Cup was hard fought

Track action got under way at 9.45am with practice for the Kinrara Trophy, during which pole was taken by the Niklas Halusa/Emanuele Pirro Ferrari 250GT SWB ‘Breadvan’, a comfortable 1.3 secs clear of the Phil Keen/Jon Minshaw Jaguar E-type.

In qualifying for race two, the Fordwater Trophy, Sam Tordoff (Porsche 356) came out on top, a mere 0.123 secs ahead of the Aston Martin DB2 of Darren Turner.

Calum Lockie claimed pole for the Goodwood Trophy in Sean Danaher’s Maserati 6CM, but only by 0.148 secs from Christian Gläsel (Alfa Romeo P3 Tipo B).

And it was – perhaps unsurprisingly – close at the top of the timesheets in practice for the St Mary’s Trophy. Reigning BTCC champion Ash Sutton secured pole (Lotus Cortina Mk1), just 0.3 secs ahead of Matt Neal in a Studebaker Lark Daytona 500 – that’s going to be some race!

Lotus-Fords are on top for Sunday’s Chichester Cup, too, with Andrew Hibberd on pole and Sam Wilson starting second. 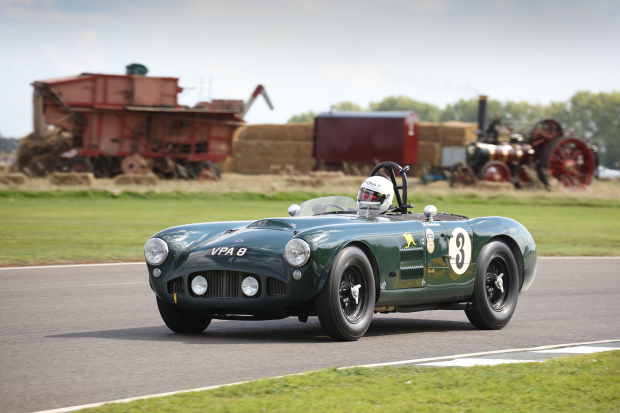 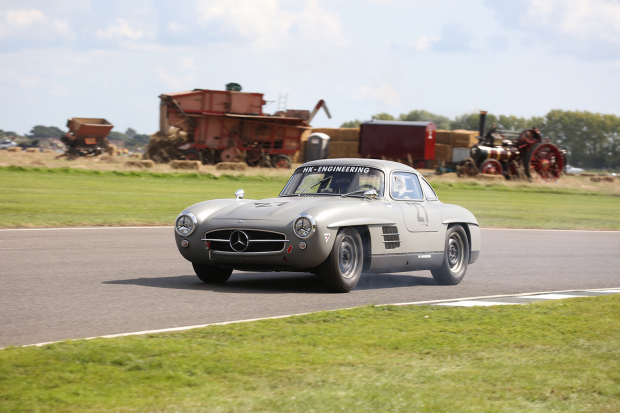 Martin Hunt will start the Freddie March Memorial Trophy from pole (HWM-Jaguar), from Richard Woolmer (HWM-Cadillac) and Darren McWhirter (Lagonda V12 Le Mans), and in the Whitsun Trophy, Mike Whitaker (Lola-Chevrolet T70 Spyder) will be on the front of the grid, ahead of Rob Huff (Lotus-Oldsmobile 19) and Turner (Hamill-Chevrolet SR3).

The front row of the inaugural Jack Sears Memorial Trophy is a Jaguar Mk1 lockout, with Justin Law from John Young and Grant Williams, while Andy Middlehurst (Lotus-Climax 25) secured the Glover Trophy pole.

And when practice concluded for the weekend’s final race, the 25-minute Sussex Trophy, it was Keen (Lister-Jaguar ‘Knobbly’) on pole from Sam Hancock (Ferrari 246S Dino). 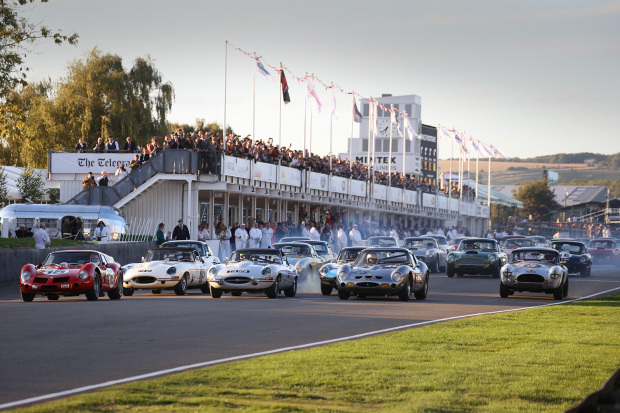 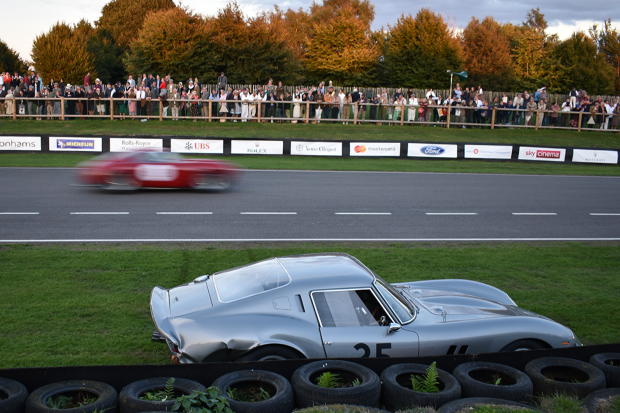 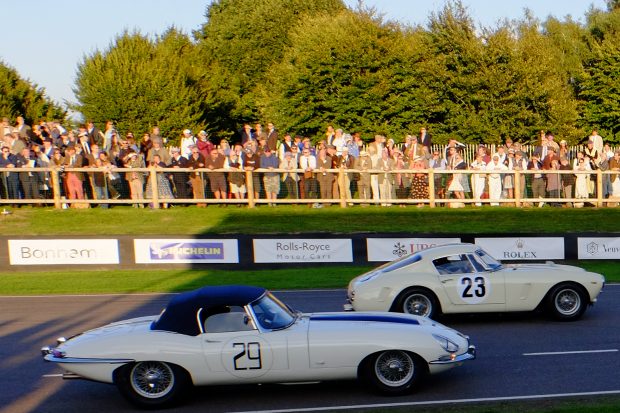 The action gets underway; Retirees 250GTO (left) and E-type

With all qualifying completed, it was time for the first contest of the weekend to get under way, an hour-long, two-driver enduro for closed GTs of up to 3-litres and built up to 1963.

Polesitter Halusa made a clean getaway, with Minshaw chasing hard. A few places back, however, Richard Meins (Jaguar E-type fhc) ran into the back of Gary Pearson (Ferrari 250GTO) off the line, causing the latter to retire the following lap.

Another to retire early in the race was Gregor Fisken in his E-type, but not before he made up an astonishing 11 places in the opening lap, having started at the back of the grid. 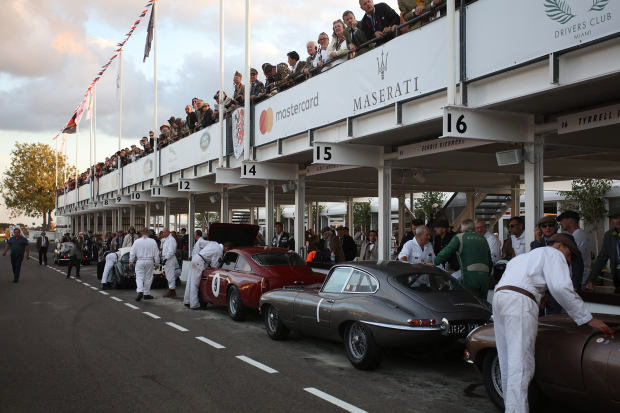 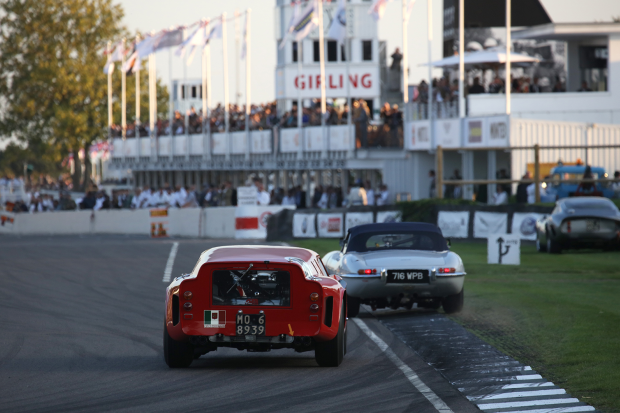 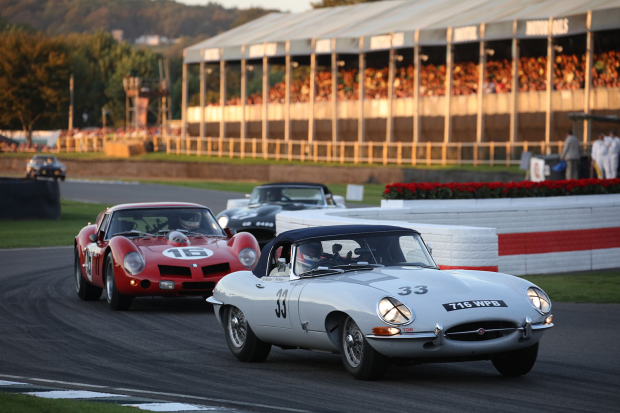 Meanwhile, out front, the battle was on, and after four of the 60 minutes, Minshaw gained the advantage at Madgwick. Then a lap later, at the same place, Halusa returned the favour and retook the lead.

Traffic for the leaders led the pair to swap places several times again, before Minshaw’s mistake at the chicane gifted the lead to Halusa. The pit window opened and, at the first opportunity, Minshaw dived in, handing the E-type to Keen; two laps later Halusa pitted for Pirro to replace him in the Breadvan.

By now, Keen was out in front, but it took just a few laps for Le Mans legend Pirro to reel him in and get the Ferrari ahead. Again, traffic played its part as the pair swapped places several times before Pirro’s decisive move with about 20 minutes remaining. He then began to open up a gap to Keen. 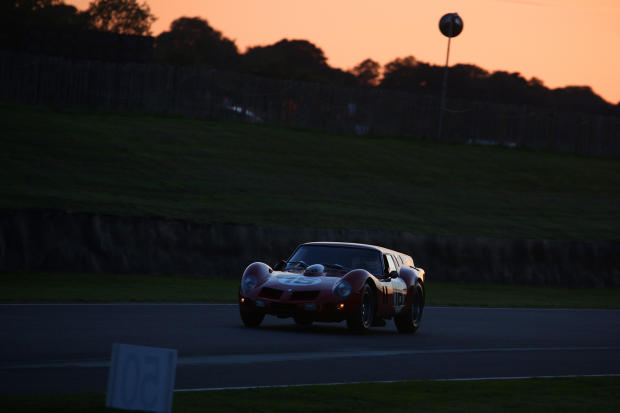 Emanuele Pirro took the chequered flag as the sun set

While the battle for the lead cooled, it intensified behind for the final podium spot between the E-types of Huff and Nigel Greensall. Huff’s bonnet coming loose and blinding him under braking, before closing itself again, only added to the drama. And it was during one such moment on the penultimate lap that, as the pair diced for position, Greensall went a touch wide at Woodcote and Huff took the place.

A lap later, in the fast-fading light, Pirro took the chequered flag for a well-deserved win with Halusa, 5.7 secs from Keen/Minshaw with Huff/Meins in third.

“There was someone who wanted some bread really quickly, so we had to speed up,” joked a delighted Pirro, always a popular winner at Goodwood.

And if that thrilling contest is a sign of things to come, we can’t wait for the next two days at the Revival.

Gallery: the greatest free car show in the world (aka the Revival Pre-'66 car park)

What we're most excited about at the Goodwood Revival 2018

How to watch the Goodwood Revival 2018 (without being there)

Like a Rolling Stone: Keith Richards’ Ferrari goes to auction

Yours for £500k: Fiat transporter that starred in Le Mans