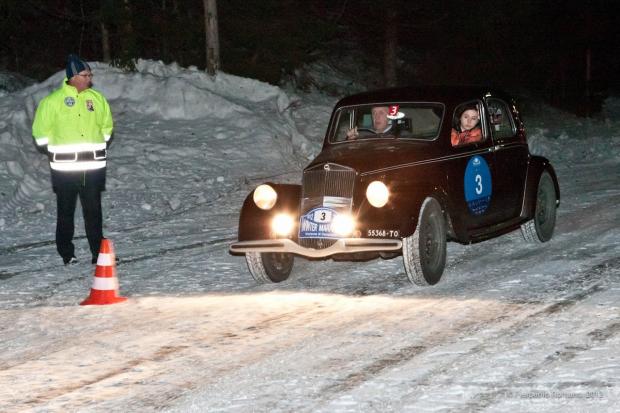 The father and daughter team of Ezio and Francesca Salviato won the 24th Winter Marathon in their 1939 Lancia Aprilia.

Victory was all the more sweet for the Varese equipe because they had to abandon their entry last year just hours before the start after mechanical problems.

Two Alfa Romeo museum cars filled the rest of the podium, the first the 1962 Giulietta TI driven by Alessandro Gamberini, ahead of Fabio Salvinelli in a 1964 TI Super.

The all-Italian – car and crew – clean-sweep meant that the 1968 Porsche 911T of Armando Fontana was nudged into 4th spot and one below it was Roberto Crugnola's 1958 Triumph TR3A. First Mini home was the 1968 Cooper 'S' of Alberto Aliverti in ninth.

The gruelling two-day event in late January was subjected to some fierce mountain weather, but the competitors were utterly unfazed, one announcing that the blizzards were "what make the event interesting… and why we do it".

In total 158 crews in 25 diverse marques took up the challenge to drive from Madonna di Campiglio and back via Canzei crossing a wealth of mountain passes, with 120 of the runners classified at the finish. The fantastic machinery ranged from 1932 Fiat 508 Balilla Sport to 1968 Porsche 911S.

Despite 10 different nations being represented, the first non-Italian driver in the overall classification was Giuseppe Francia in 91st spot with his 1956 Porsche 356A coupé.

The extreme weather led to two of the time trial sections being abandoned, but the highest pass traversed was still 2200m above sea level.Photos: copyright Pierpaolo Romano/Winter Marathon

More images below, click on any photo for a slideshow